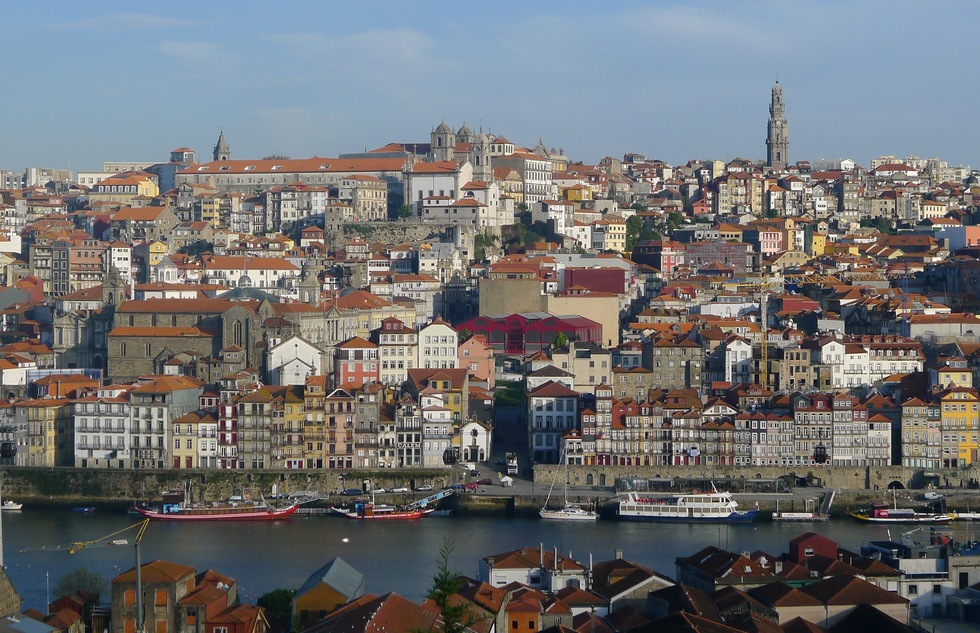 Where Spain and Portugal Mix: A Galicia Vacation of Wine, Seafood, and Festivals

The Iberian peninsula’s rugged northwest has been divided since 1139, when King Afonso Henriques broke with his Spanish relatives to create Portugal. Eight centuries on, inhabitants of Spain’s Galicia region still have much in common with their neighbors a few miles away in northern Portugal. They share a land of verdant valleys, rocky highlands, and Atlantic surf. There’s a common Celtic heritage, a multitude of medieval towns, rich folk traditions, and a love of fresh seafood washed down with white wine. In fact, Galicia and northern Portugal have rarely seemed so united. Frontier controls are long gone, cross-border highways link cities, and the international airport in Porto (pictured above) serves as the hub for the whole region. Taking a holiday here means having a seamless two-country vacation on the edge of Europe. 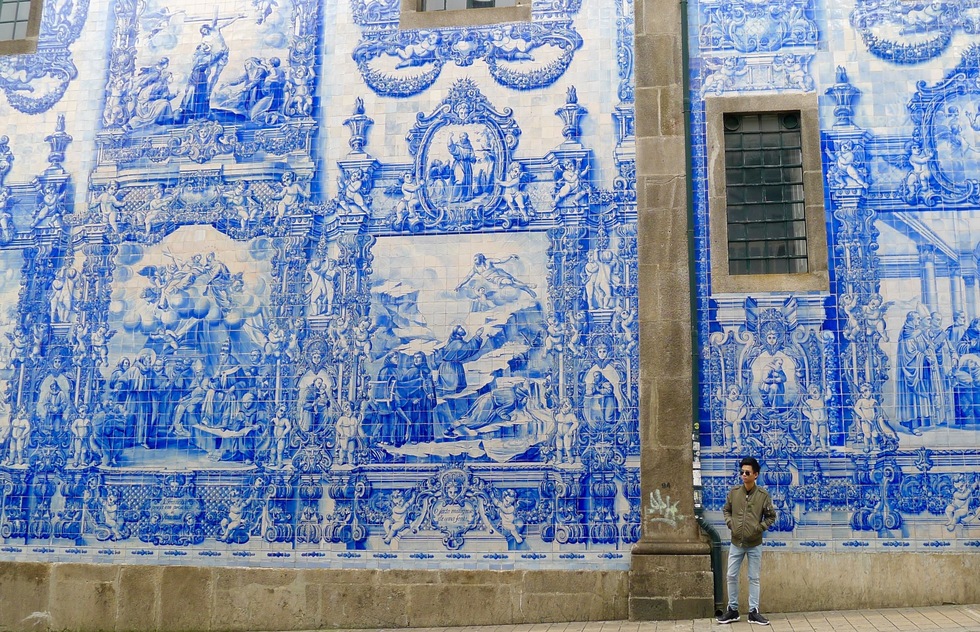 Porto is the region’s gateway and biggest city. A UNESCO World Heritage site, the historic old town rises steeply from the river Douro. The south bank has centuries-old wine lodges where port matures in countless barrels and bottles. Across the river, tightly packed neighborhoods of winding alleys are filled with bars, restaurants, and traditional stores. Architectural treasures include the gold-filed Church of São Francisco, a fortified cathedral dating at least to the 1200s, and Eiffel-inspired iron bridges spanning the Douro gorge. Yet Porto is no ossified museum town: Nightlife buzzes, there’s an innovative gastronomic scene, and top-class culture centers on the Serralves arts complex and Casa da Música concert hall. 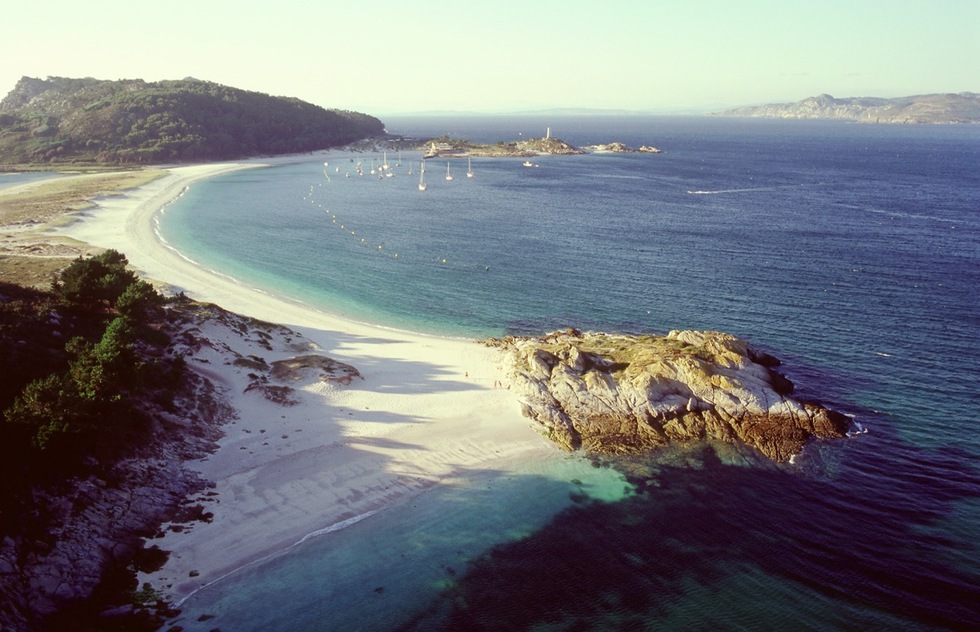 Beaches start in the western suburbs of Porto. Head north and Portugal’s Costa Verde is a succession of wide strands backed by vine-covered hills. On the Spanish side, the Rías Baixas coast has more than 700 sandy beaches on narrow promontories poking into the ocean. Beaches on the offshore Cíes Islands (pictured above), distinguished by talc-fine sand and turquoise waters, were voted the world’s most beautiful by Britain’s Guardian newspaper. The wild Costa da Morte has a grim history of shipwrecks, but includes spectacular stretches of untouched sand, such as the 5-mile Praia de Carnota. Playa de as Catedrais (Cathedral Beach) on Galicia’s north coast gets its name from stone arches that tower over the sand at low tide like a gothic nave. 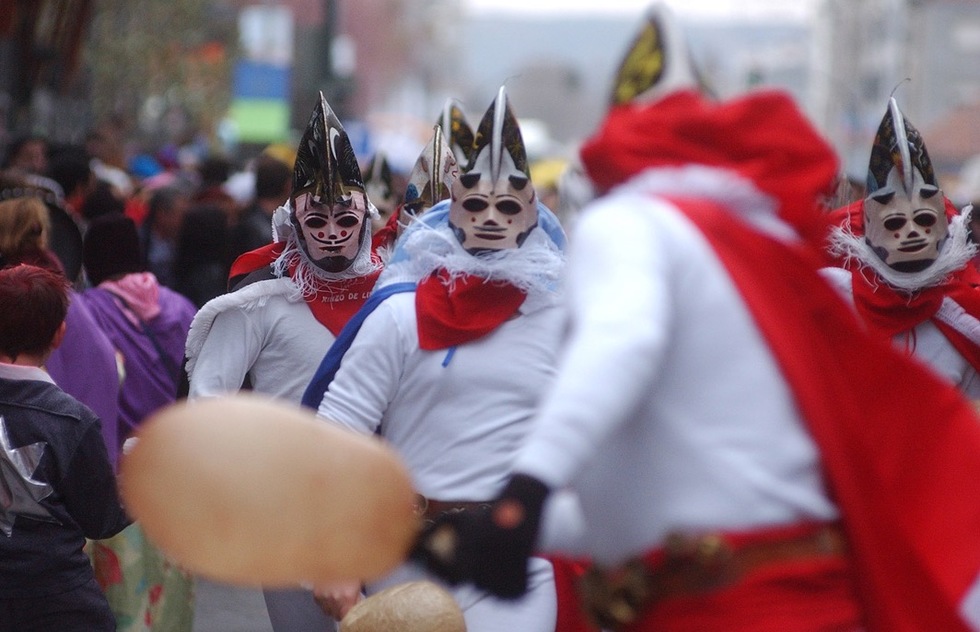 Galicia has its own language, closer to Portuguese than Spanish. That distinct culture is deeply rooted. Spectacular folk festivities include roundups of wild horses held in Galician villages such as Sabucedo in July. St. John’s night is celebrated by huge street parties across Portugal's Porto and beach bonfires in Spain's A Coruña. Villages on both sides of the frontier go wild for carnival with the masked madness of the festas in Verín, Podence, and Xinzo de Limia (pictured above). Shoppers may prefer some more sedate folk traditions, like the intricate gold jewelry of Viana do Castelo or Sargadelos ceramics. 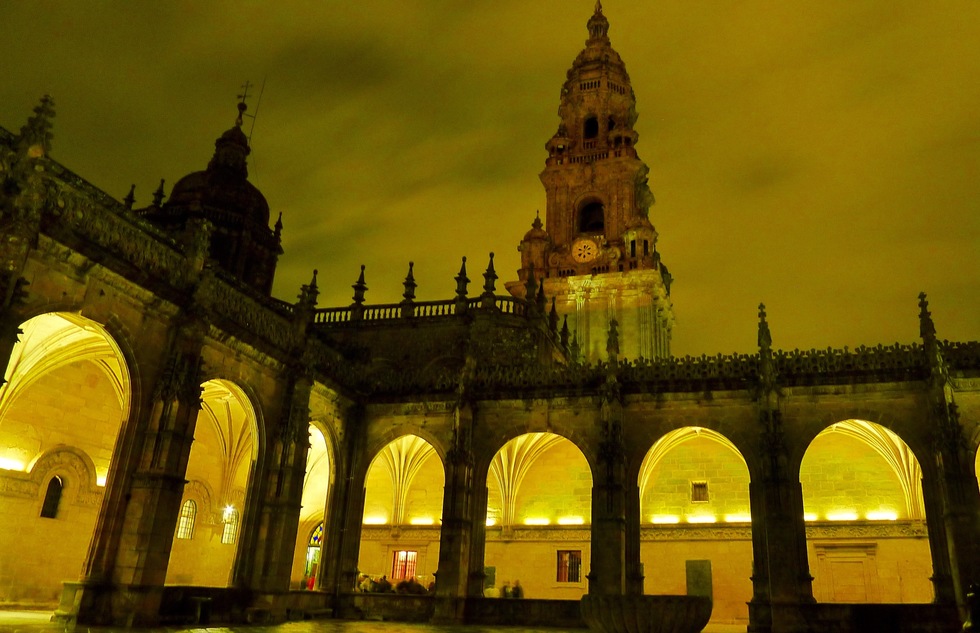 Paul Ames
The path to Santiago

Santiago de Compostela has been a tourist attraction since the 9th century, when pilgrims first trekked to pay homage at the tomb of St. James. Today, the magnificent medieval cathedral (pictured above) built over the shrine remains one of the great sights of Christendom. It still attracts thousands of pilgrims walking the Way of St. James—paths that converge on Santiago from across Europe. The city is Galicia’s administrative seat and another World Heritage site. Its arcaded lanes and squares are lined with granite churches, palaces, and wandering groups of black-caped minstrels. Among the most impressive buildings: the Hostal dos Reis Católicos, which was built by monarchs Ferdinand and Isabel as a pilgrims’ hostel. It now holds a luxurious hotel. 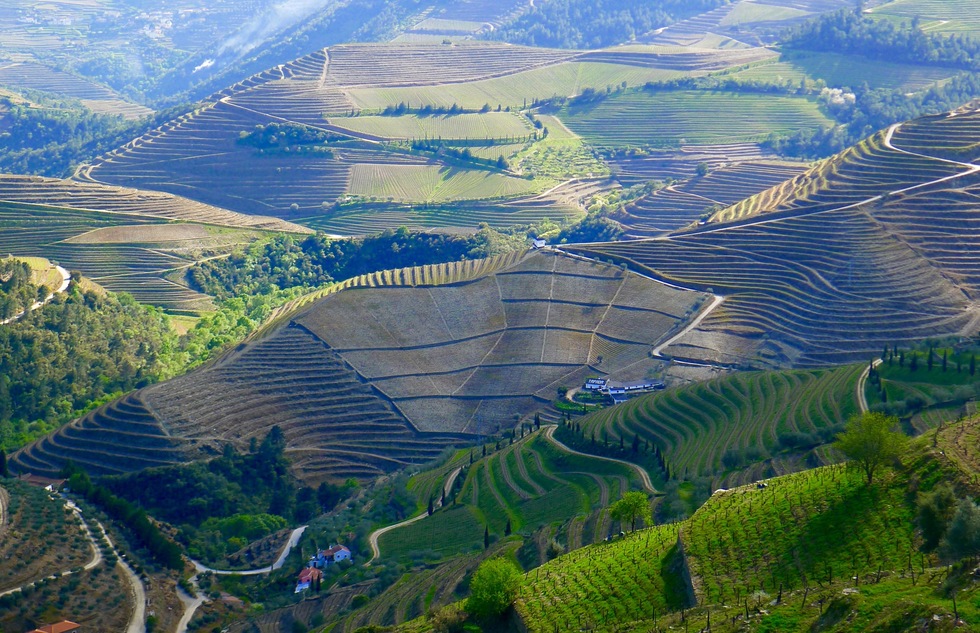 Two of the region’s great pleasures are exploring the ancient wine culture and sampling local brews. Tastings in the old wine lodges across the river from Porto will unlock the darkly delicious secrets of port. Upstream, the Douro coils through countless vine-covered hills forming one of the world’s most beautiful wine regions (pictured above). Several manor-house wineries open their doors with stylish accommodations. Along the coast, Portugal’s Vinho Verde region and the Rías Baixas and Ribeira wine regions of Galicia are best known for whites that pair perfectly with seafood. An exotic drinking ritual involves Galician queimada, a highly potent punch set alight before drinking and reputed to ward off witches. 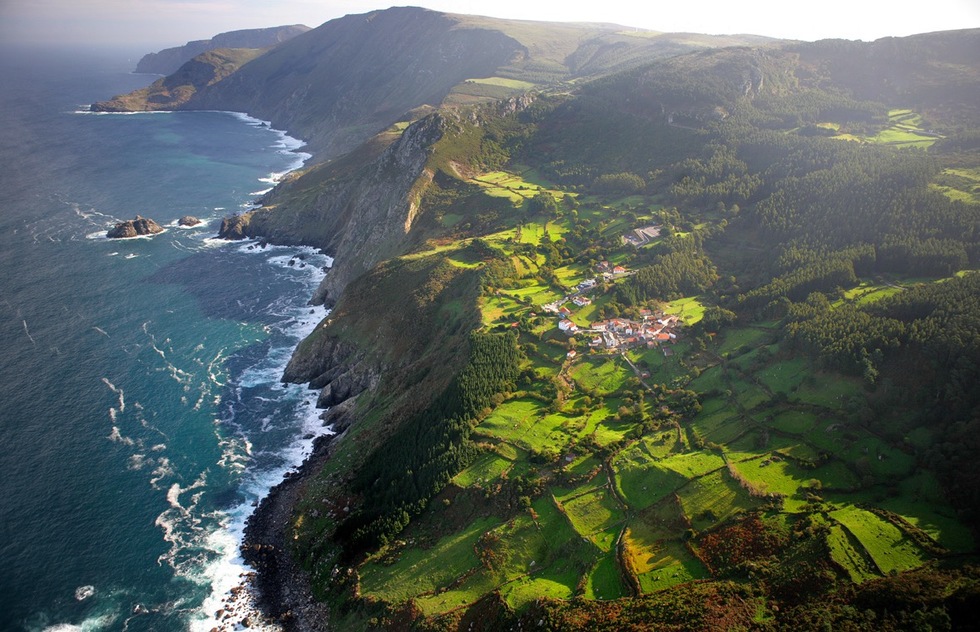 The region is filled with forest-covered hills, rocky plateaus, and fast-flowing streams—paradise for hikers, kayakers, and mountain bikers. One highlight is the Peneda-Gerês National Park, Portugal’s biggest protected wilderness filled with more than 800 species of native flora. Galicia’s Ribeira Sacra combines nature and history with 18 Early Medieval monasteries set among canyon scenery—the monks are the ones who established winemaking here in the Middle Ages. Cape Finisterre is a stark maritime outcrop revered by ancient peoples as the world’s outer limit, while the Atlantic-facing Serra da Capelada (pictured above) has some of Europe’s highest cliffs (as high as 620 m/2,034 ft). Way inland, Portugal’s Trás-os-Montes (beyond-the-mountains) is a land of boulder-strewn highlands, hearty cuisine, and time-honored traditions. Cantabrian brown bears and Iberian wolves are making a comeback in the most remote hills. 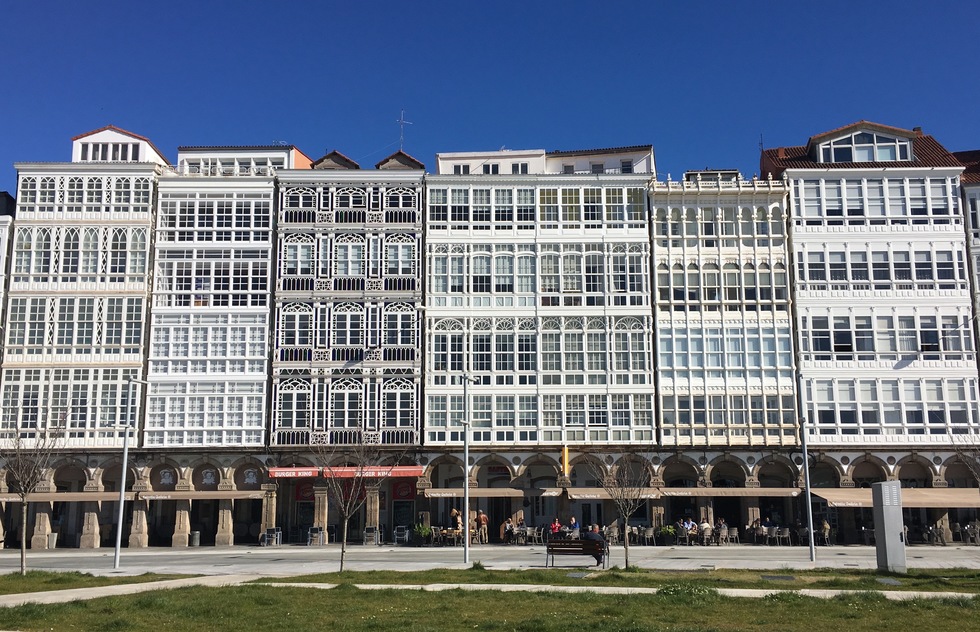 You'll find historic towns everywhere. Along the water in elegant A Coruña is the best place to see Galicia’s traditional glass-fronted houses. Huddled beneath castle walls, UNESCO-listed Guimarães was Portugal’s first capital. The sturdy stone bastions of Ourense and Bragança date back to Roman times. Braga’s fine churches reflect its distinction as the ancient home of Portuguese Christianity. Beachside Baiona was where Europe learned of Columbus’ landing in the Americas (a replica of his ship the Pinta floats in the harbor). Amarante and Ponte da Lima are lovely, laid-back riverside towns in Portugal’s Vinho Verde country. 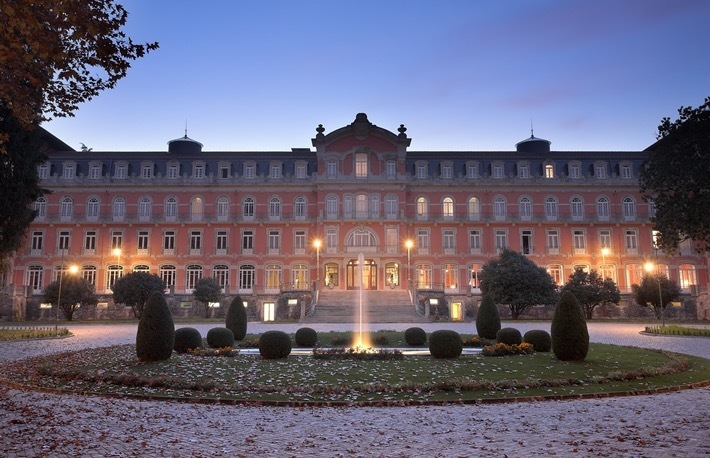 Countless thermal springs bubble away under Galicia’s hills. In Lugo, a riverside spa hotel incorporates ancient Roman baths. The town is also girdled by Roman walls—another World Heritage site—and fills with folk in traditional costume during October fiestas. Ourense has more than 70 hot springs large and small, but the region's grandest spa lies over the border. Portugal’s King Carlos I ordered the construction of the Vidago Palace Hotel (pictured above) as a thermal resort to rival the finest in Europe. Carlos was assassinated before it opened in 1910, but it lives on. Restored to its Belle Époque glory in 2010, it sits amid 250 acres of parkland complete with golf course, glittering ballrooms, and a vast range of water treatments. 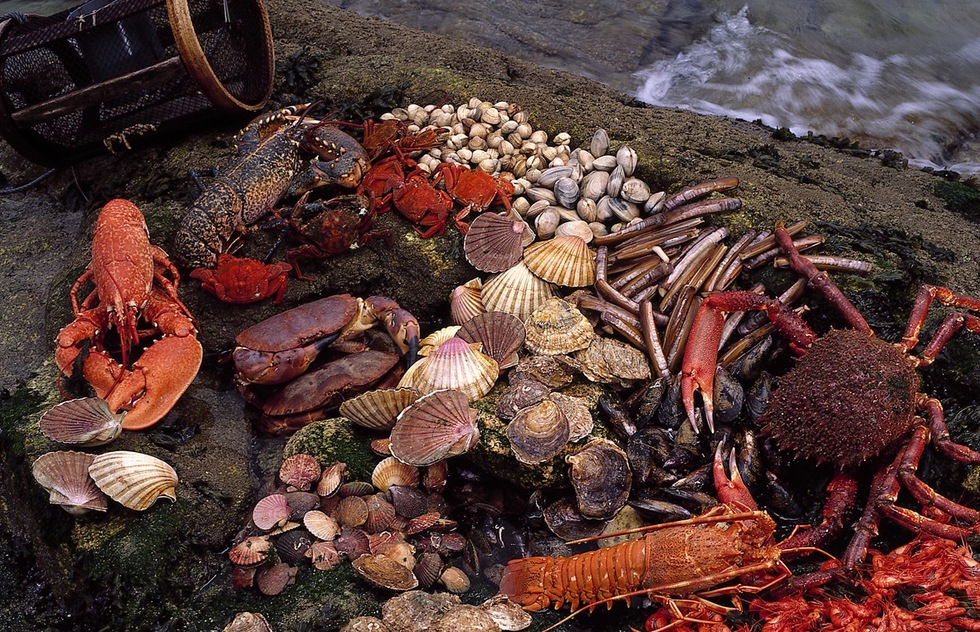 Galicia’s cool Atlantic waters are famed across Spain for their mariscos, or seafood, ranging from tiny clams to monster lobsters and crabs that locals call "oxen of the sea." Portuguese people also love their shellfish—Porto’s seaside suburb of Matosinhos is full of specialist marisqueira restaurants. Octopus is a cross-border favorite, served chopped and sprinkled with paprika in Galicia, deep-fried with rice in Porto. Humble specialties include Porto’s francesinha sandwiches (packed with meat, grilled with cheese, and finished with a fried egg) and Galicia’s empanadas (which are flat pies—here, usually filled with tuna). Young chefs are giving a new twist to traditional cuisine in restaurants like Porto’s Oficina or SanMiguel in Ourense. 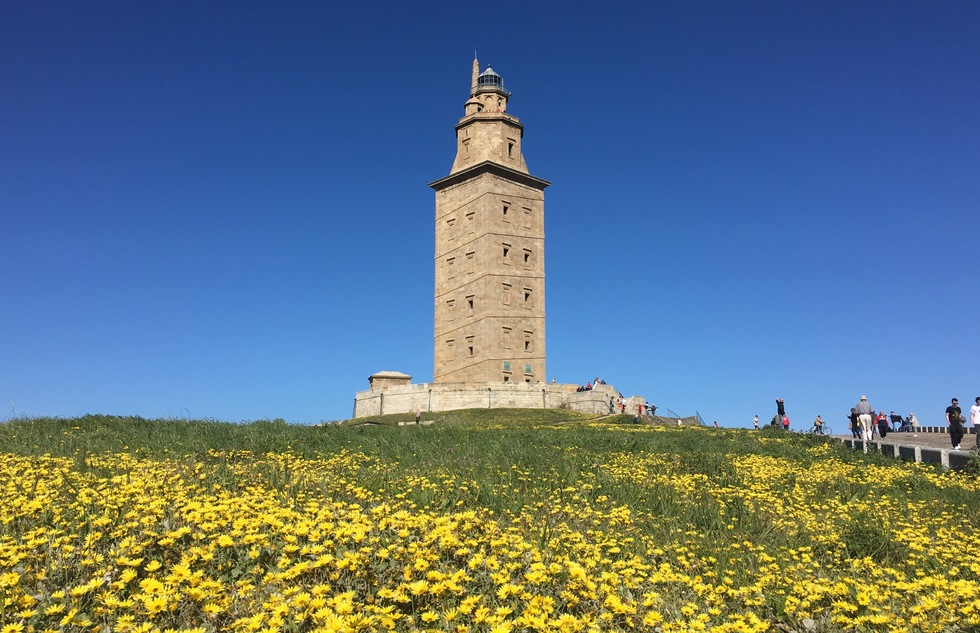 Some 22,000 years ago, images of animals were scratched into riverside rocks near Vila Nova de Foz Côa, and they're among humanity’s earliest artworks. By those standards, the Torre de Hércules (Tower of Hercules, pictured above) is relatively modern: The world’s oldest working lighthouse was built by the Romans in the 2nd century near A Coruña. Mysterious hilltop forts known as castros were constructed by Celtic people who lived here even before the Romans. The best-preserved ones include seaside Santa Trega and Citânia de Briteiros near Guimarães. If you want to stay in a historic monument, many mansions and monasteries have been transformed into boutique hotels: Try Pazo De Bentraces, a 17th-century bishop’s palace, or Paço de Calheiros, a winemaking manor of similar vintage.