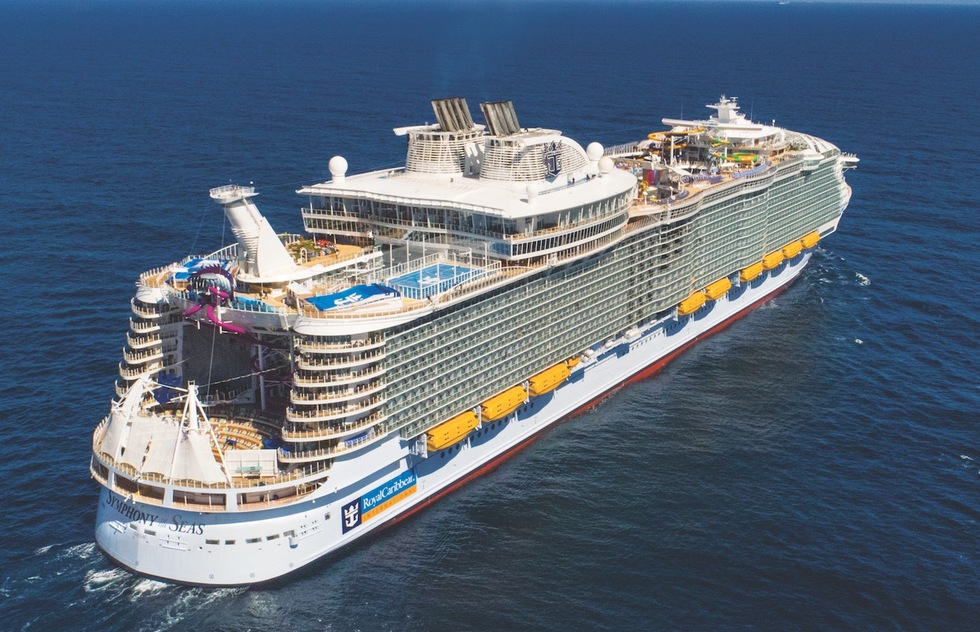 Symphony of the Seas by Royal Caribbean: A Tour (and the Cheapest Cabins)

When the Symphony of the Seas was launched in the spring of 2018, it was billed as the largest cruise ship in the world. This was true—but only by a very small degree over the previous title holder, Harmony of the Seas, and it won't be true for long. Its maker, Royal Caribbean has learned how to keep itself in the headlines by repeatedly crowning its newest ships with the title. But in style as well as substance, the Symphony, which cost an astounding $1.5 billion to make, is very much like the other Oasis-class vessels.

While above decks, Royal Caribbean is establishing a predictable continuity of its basic product, it's changing things radically below decks, where customers can't see the innovation. This ship looks very much like its predecessors, but it's the beneficiary of technology that makes it 25% more efficient than its sisters built just a few years ago. Among them: 100% LED and non-incandescent lighting that makes everything easier to keep cool, a layer of microbubbles that enables the hull to coast through the water with significantly less friction, and a waste-and-exhaust system that retains toxins for safe and controlled disposal on land. 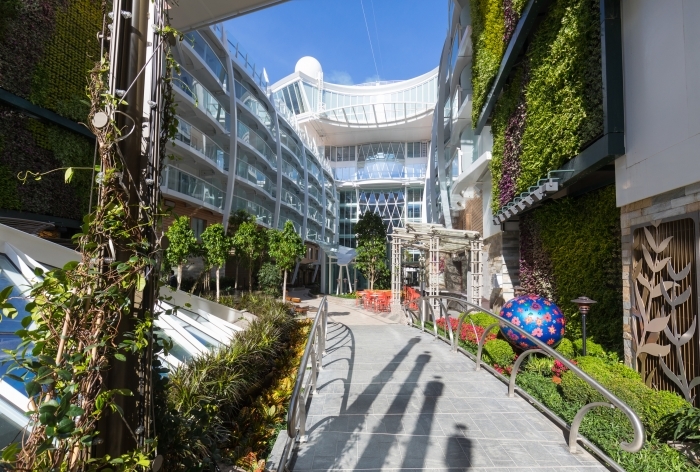 SBW-Photo
Central Park
The Symphony, like the Oasis, Allure, and Harmony, is carved into what the line calls "neighborhoods," which essentially divide the vessel into mini-malls that line an interior canyon. This is Central Park, lined with restaurants such as Jamie's Italian (new to the line—to eat there, you must make a reservation and pay a surcharge). By night, Central Park is gently lit, and you can hear the sound of crickets in the bushes. 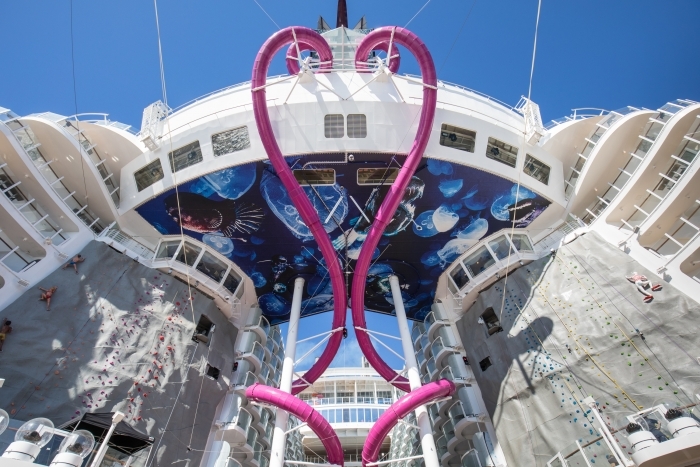 SBW-Photo
Ultimate Abyss
The two purple tubes snaking down from the 16th deck are Ultimate Abyss, two identical, mirror-image 10-story, dry slides ridden on mats. It takes about 13 seconds to plummet down to deck 8's Boardwalk neighborhood, where you disembark near a Johnny Rockets hamburger joint, a sports bar with arcade games, a candy shop, a merry-go-round, and an outdoor amphitheatre for diving-and-acrobatics shows. 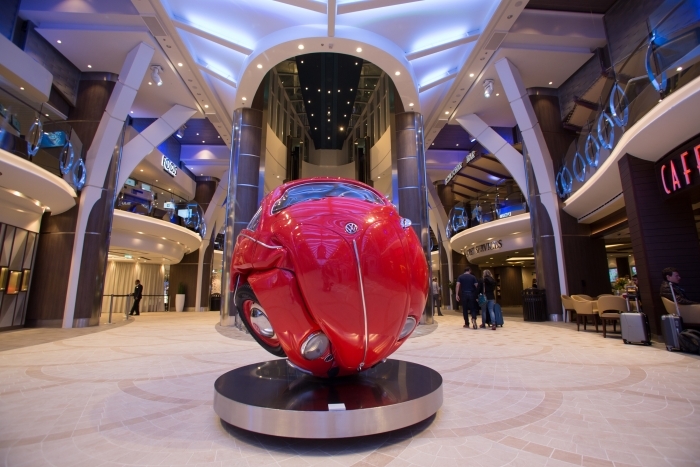 SBW-Photo
Royal Promenade
The deep interior of the vessel contains the Royal Promenade, a two-level indoor mall of easygoing casual eateries, shops, bars, and a Starbucks. This sculpture, which was made out of Volkswagen Beetle parts by artist and Indonesian professor Ichwan Noor, is a centerpiece. It stands beside the Rising Tide bar, a cocktail area that slowly transits between this deck and Central Park as guests ride and imbibe. 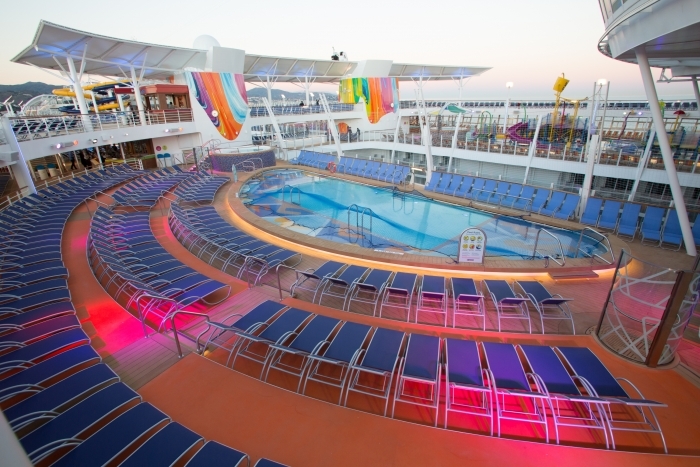 SBW-Photo
Pool deck
Although Royal Caribbean's Oasis-class ships are unrivaled in terms of things to do, because of the cleft design that leaves a long gap down the middle, the top-deck pool space suffers. The pools simply can't be that big—certainly not for 6,000 people. Although there are deck chairs aplenty, if your intention is to spend your cruise splashing in a pool, the design of these ships is not ideal for that. 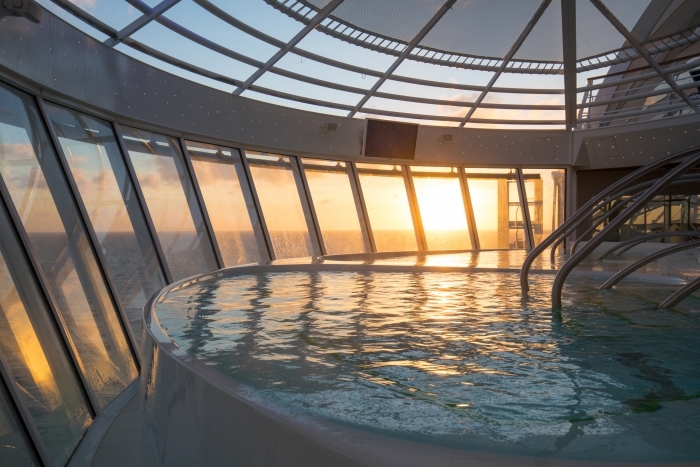 SBW-Photo
Spa tub
Designers have attempted to make up for the lack of a giant central pool by adding a few novelty tubs here and there. These hot tubs jut out over the sea on both sides of the ship. 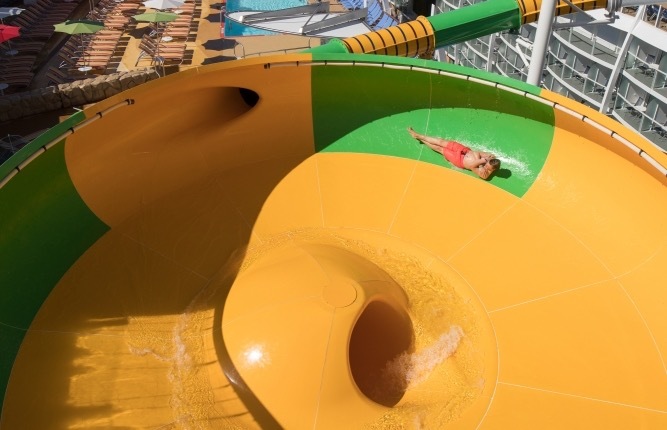 SBW-Photo
The Perfect Storm
There's also a trio of body slides that are collectively dubbed The Perfect Storm. They sweep out briefly above Central Park (you'll pass over clear panels high above it) on your way down. One of them culminates in this drain-like bowl before dumping you out the end, dripping and giggling. Expect lines. 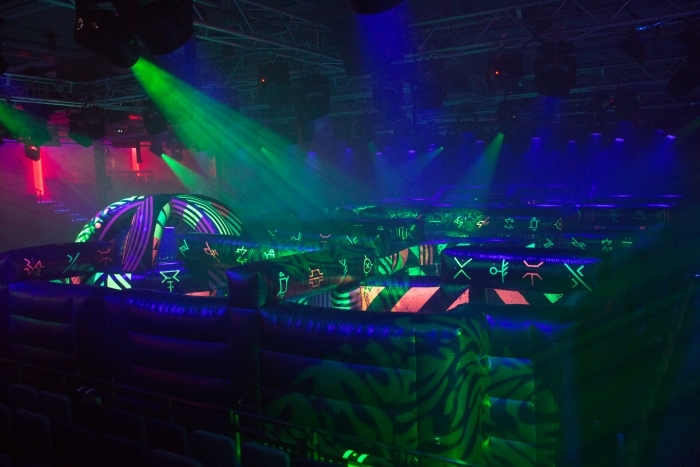 SBW-Photo
The Battle for Planet Z
Studio B is a multi-purpose space on Deck 4 that converts for a surprising array of activities—keep an eye on the daily schedule. It can be an ice rink for the ship's two pleasingly hokey skating shows; it can add flooring and install cocktail tables in the bleachers to become a stadium nightclub; and when the inflatable maze comes out, it's the laser tag challenge The Battle for Planet Z. In that, two teams—"Robots" and "Aliens" don illuminated vests and hunt each other in the maze for a few minutes while computers keep score of which team accumulates the most bullseyes. 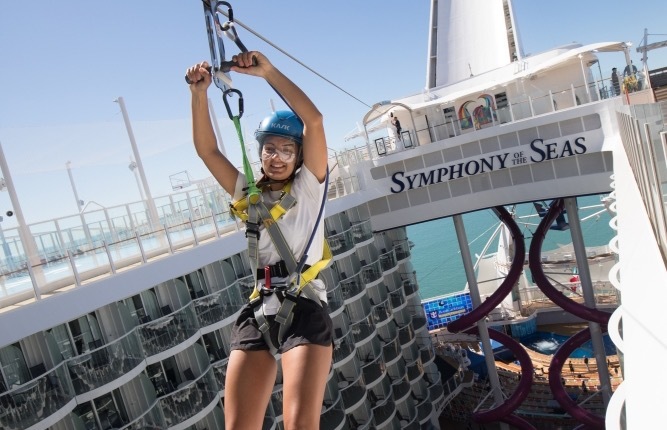 SBW-Photo
Zip Line
On the top deck, there's also a pair of sheet wave machines, minigolf, a basketball court, and a very brief (but still bracing) zip line seven floors over the Boardwalk. 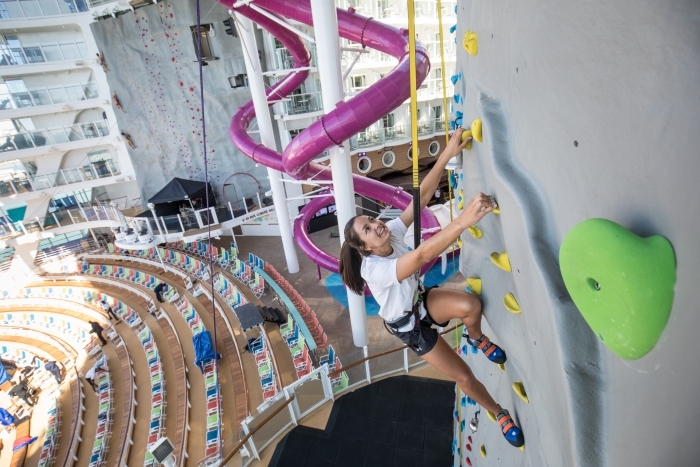 SBW-Photo
Rock wall
Oh, and simulated rock walls above the Aqua Theatre. If this isn't your style, you may be interested in the hot dog stand and the candy store at the bottom. 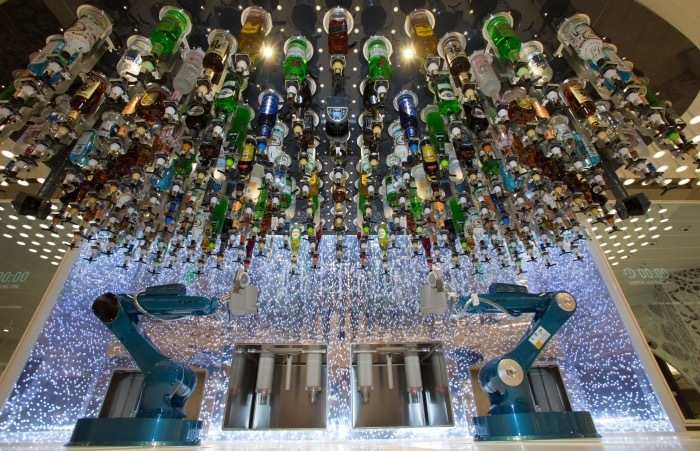 SBW-Photo
Bionic Bar
As on Royal Caribbean's Quantum class of ships, there's the Bionic Bar, where you enter your cocktail order on tablets and then wait for one of two robot arms to fabricate your quaff in front of your eyes. It can take a while, but it's fun. That's an open-air space off the Royal Promenade. 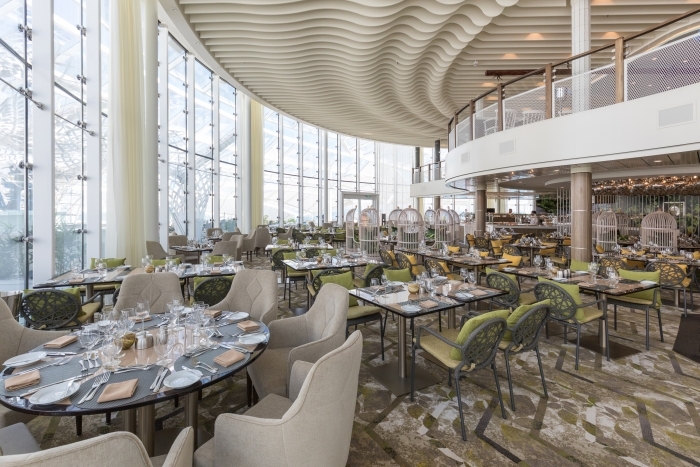 SBW-Photo
Solarium Bistro
The Solarium is a section at the prow of the ship, enclosed to ward off wind, where the adults tend to go to escape from kids. There are a few tubs, lots of loungers, a bar, and a restaurant, the Solarium Bistro. 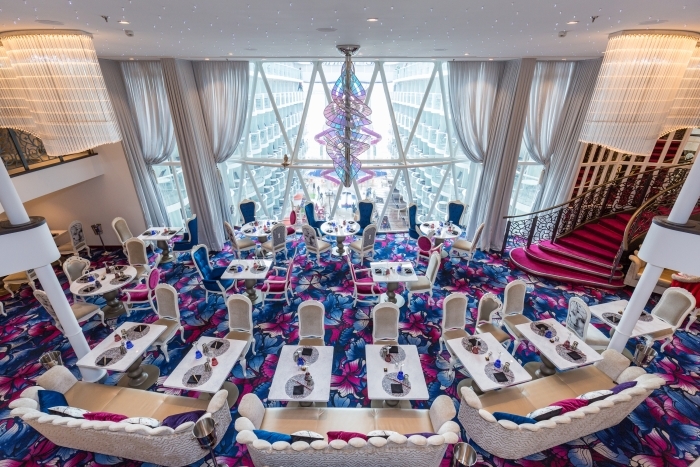 SBW-Photo
Wonderland
Your dinner reservations default to a three-level main restaurant that's included in your fare. The food is fine but not spectacular. You'll be tempted to spend more to try one of the many "specialty" (i.e. up-charged) restaurants with better and more interesting food. Those include a steakhouse, Jamie's Italian, a Japanese spot, and this place, Wonderland. Here, you can try whimsical and molecular-style cuisine. Vegetables are served on a "soil" of dried crumbled cheese, olives and mushrooms are delivered as packets of flavorful juice that pop in your mouth, and dessert is served in a delectable chocolate orb that melts away when the sauce is poured on. All while the "Mad Hatter" actor flounces around, greeting diners and issuing bons mots. Because of the experience—and this great view toward the stern—it's one of the most popular (and priciest, at around $50) extra-charge restaurants. 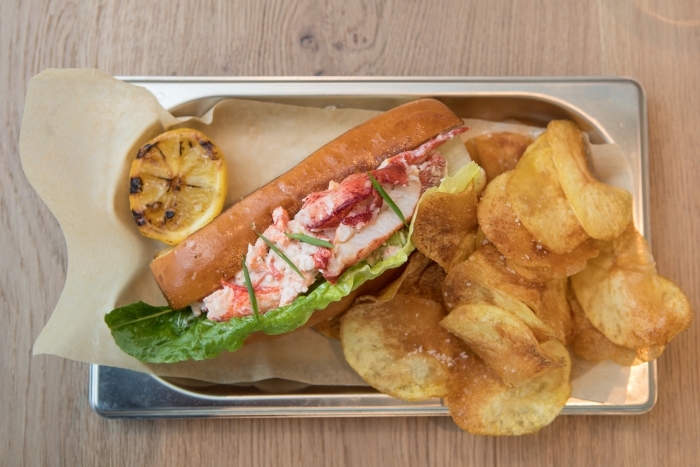 SBW-Photo
Hooked
A new feature for the Symphony is Hooked, a restaurant for seafood such as oysters and this lobster roll. (We tried it. It's not the best lobster roll you've ever had because the bread is all wrong, but we appreciate the effort.) 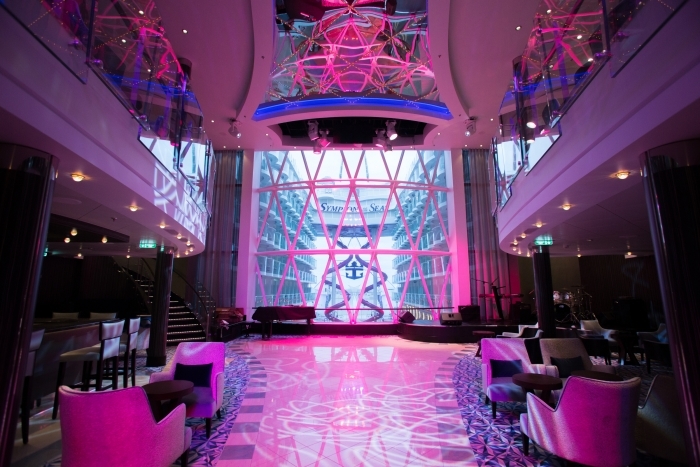 SBW-Photo
Dazzles
Beneath Wonderland, Dazzles is the best-placed nightspot if you want ocean views. All the rest—Vintages wine room, Boleros the Latin-music joint, the comedy club, the karaoke club—all have no windows to the sea. 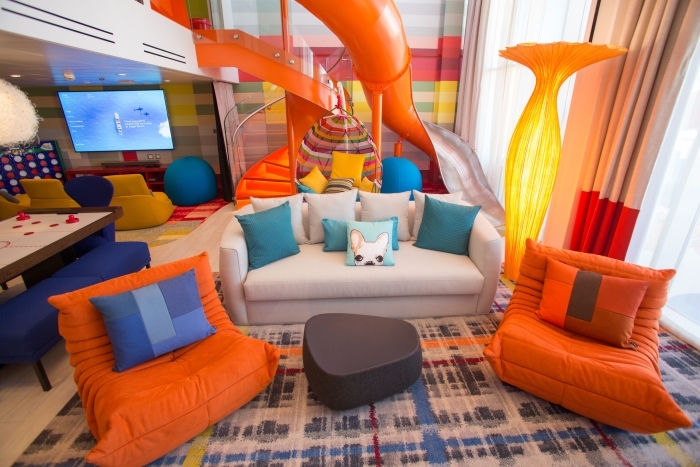 SBW-Photo
Ultimate Family Suite
The fanciest suite is this duplex—there's a Lego wall, wild colors, and a slide connecting the kids' room to the living area downstairs. You will not be staying here. It's usually sold out, and it's always high-priced—$85,000 for the December holiday week. This suite was mostly a publicity stunt. Why can't all staterooms be this fun, but affordable? 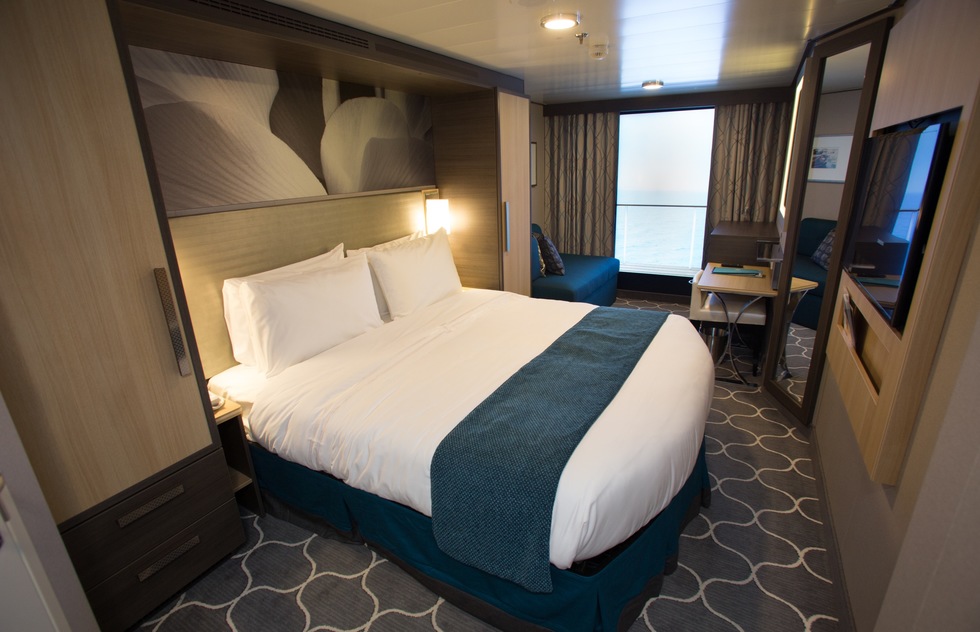 SBW-Photo
Stateroom
You can afford this stateroom, which as you can see is nicely appointed, with soft, comfortable beds. The bathrooms are economically pressed into a capsule in the corner, leaving a maximum of floor space for living. You may not want to stay in here forever, though, as many of the things that used to be free now cost money. In-room movies can be $12, for example, and to have room service delivered, there's a fee (industry-wide, it used to be free with your fare). 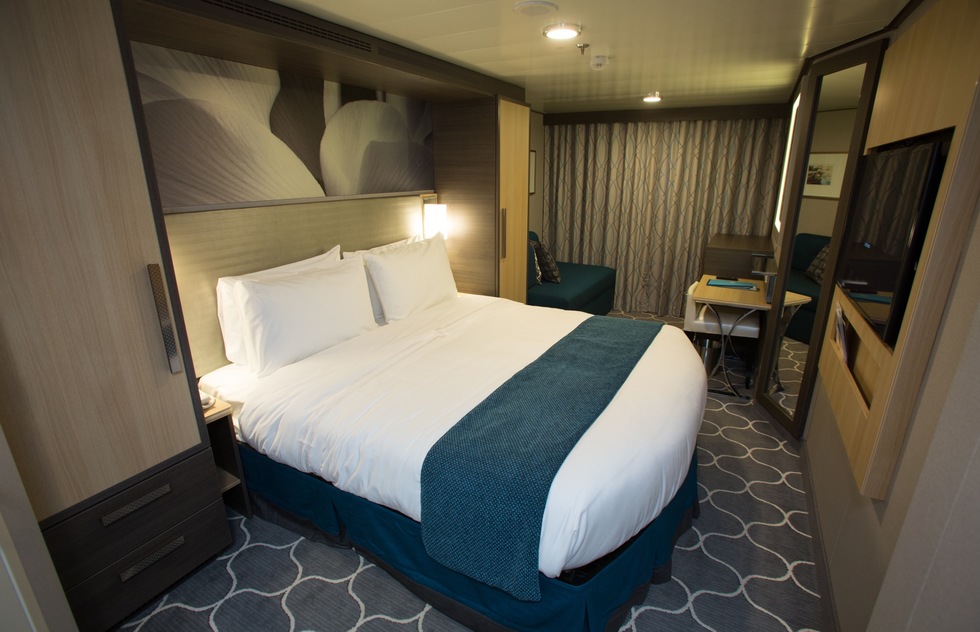 SBW-Photo
Interior Stateroom
This stateroom looks the same, but it's not. Did you catch the difference between this cabin and the previous one?  (You can click back if you want to.) Both the previous stateroom and this one are interior rooms—the cheapest available—but whereas the last one had no window, the previous one has what's termed a Virtual Balcony, which broadcasts HD images of a live view out of the ship's side. If you don't want to spend the cash on a real ocean-facing room, it's a fun way to economize. Otherwise, what you're looking at is the most affordable accommodation on board. Even rooms with balconies look just like this—you just get the balcony with two chairs, too. 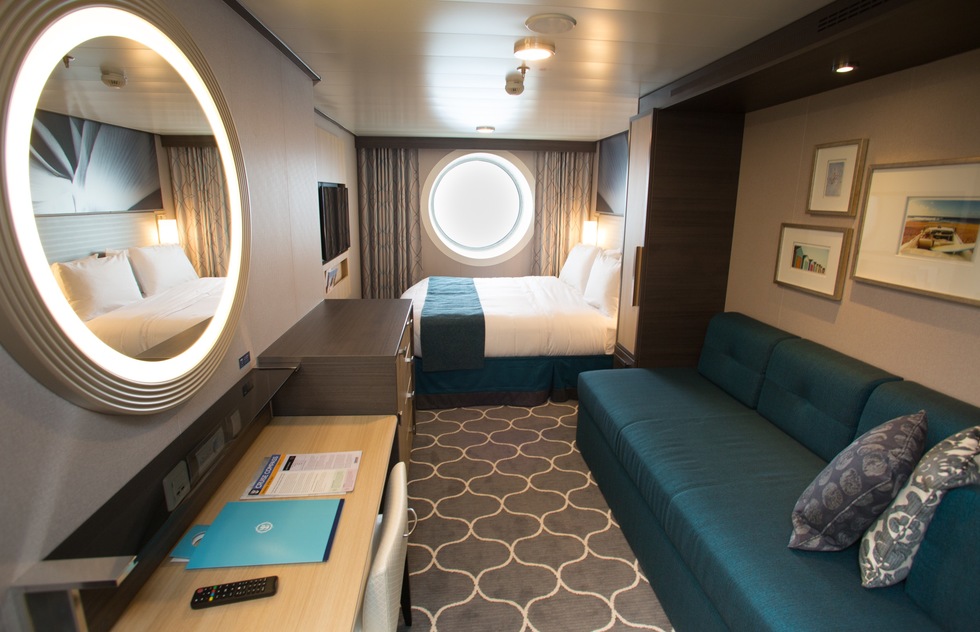 SBW-Photo
Ocean View Stateroom
The most affordable ocean-facing stateroom is this one, the Ocean View, which is on the lower floors of the ship, nearest the Royal Promenade. There are hundreds of cabins with small balconies, too, of course, but if you're on a budget and still want to see the sea, this is the most affordable option.
Beach & Water Sports
Cruise
Cruises
News