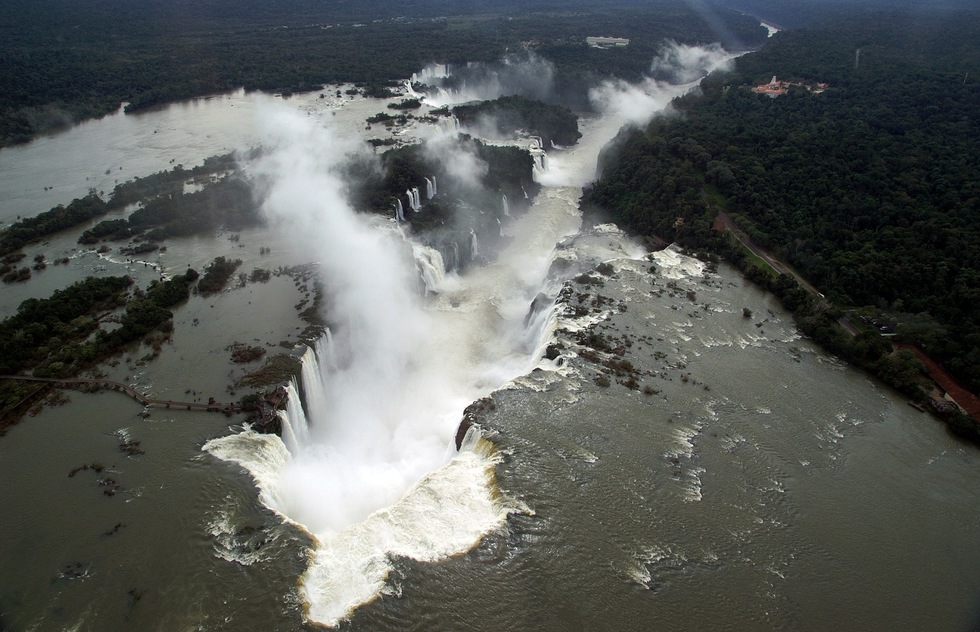 Brazil’s National Parks: How to Pick Which Ones to See

Ask any avid hiker or nature lover to name the best national parks worldwide, and it's likely that Brazil won't make the list. But it should. The huge South American country has dozens of national parks with a rare natural abundance unlike anywhere else in the world. From vast grasslands and underground caves to landscapes of rolling sand dunes and dense rainforest, there is more than enough diversity to satisfy any outdoor explorer's whim.

Pictured above: an aerial view of Iguaçu Falls 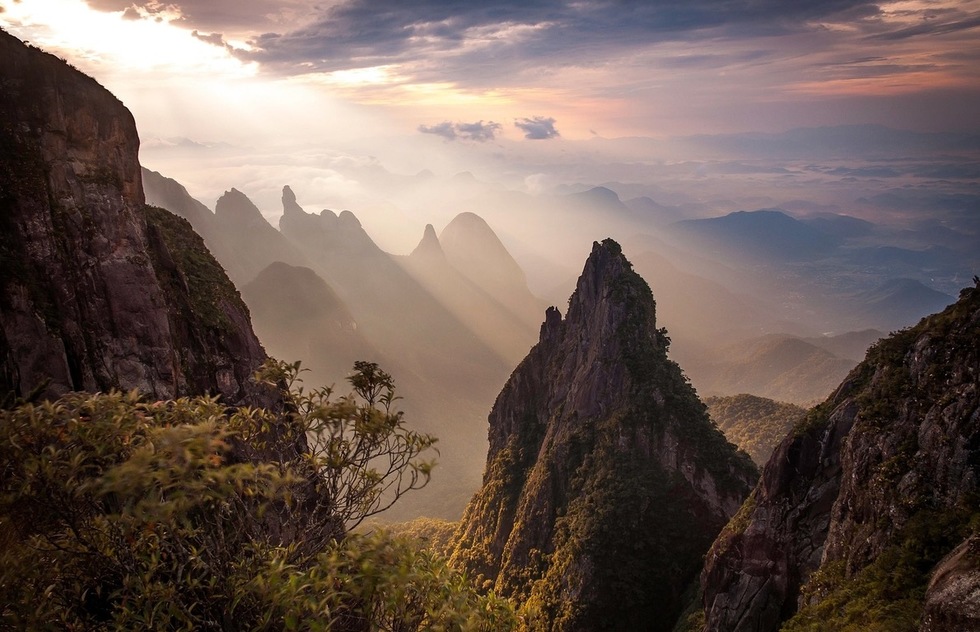 The Serra dos Órgãos mountain range lines the northern outskirts of the city of Rio de Janeiro, stretching into a series of rocky peaks, vast forests, and breathtaking views. Although not the largest peak in the park, the Dedo de Deus (God’s Finger) is the most famous. Shaped like a curled fist with a long index finger pointing to the sky, it has become the symbol of mountaineering in Brazil. If climbing is not your thing, you’ll find peace and tranquillity on the park’s sprawling trails, including the Travessia, a three-day hike between colonial towns Petrópolis and Teresópolis. 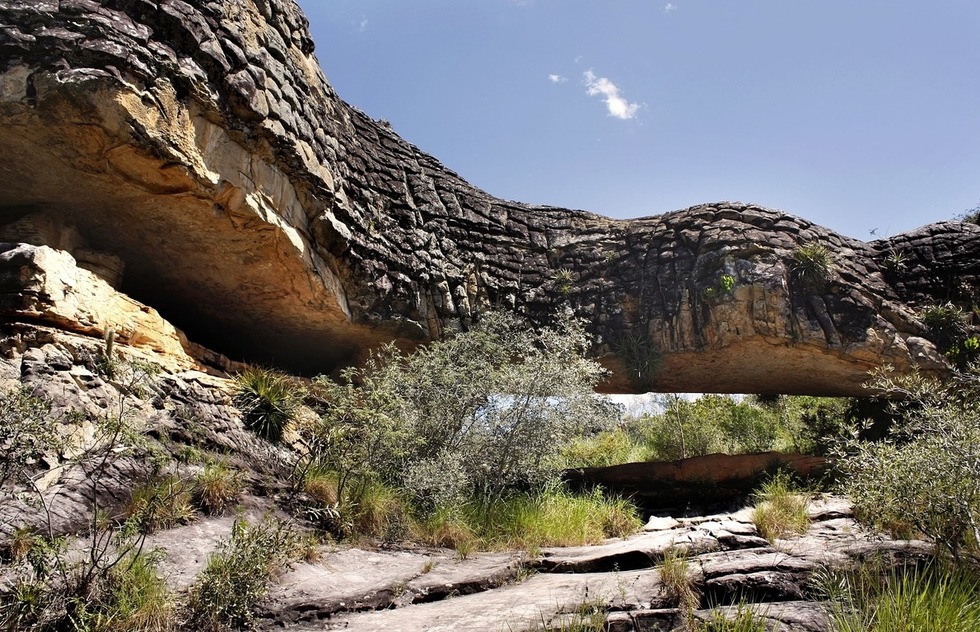 Spread out in Piauí, a state in the northeast of Brazil outside the typical tourist areas, the Sete Cidades National Park is known for its incredible rock formations dating back 190 million years. Some of them have eroded to produce unusual shapes such as the Head of Dom Pedro, the bulbous peak that resembles the head of the last Brazilian emperor, and the Turtle Rock, which looks like a gigantic tortoise shell. The park is also a site of archaeological significance—some boulders have rock paintings made by civilizations from 6,000 years ago.

But Brazil’s best park for rock paintings comes next . . . 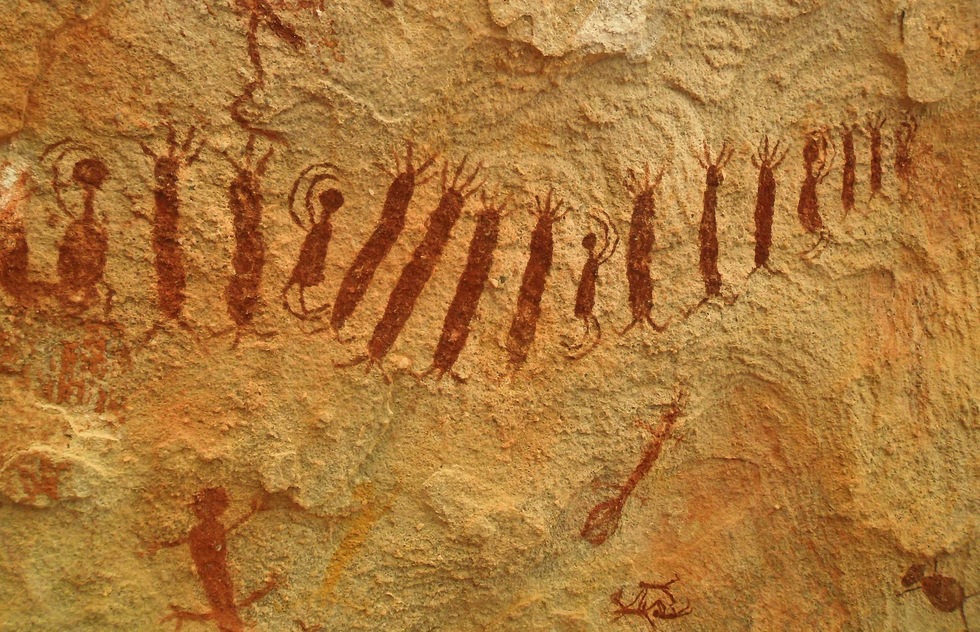 One of the most important regions in Brazil for archaeological studies is Serra da Capivara, also in Piauí. A densely populated spot before the arrival of European colonizers, the park has dozens of prehistoric sites covered in rock paintings. The most famous site is Pedra Furada, where you'll find hundreds of well-preserved artifacts from ancient civilizations. Other fascinating areas include Toca da Tira Peia, with stone tools dating to 22,000 years ago. Getting to the park can be tricky, involving a long drive on a dusty road. Yet the empty trails and extraordinary landscapes are worth the effort. 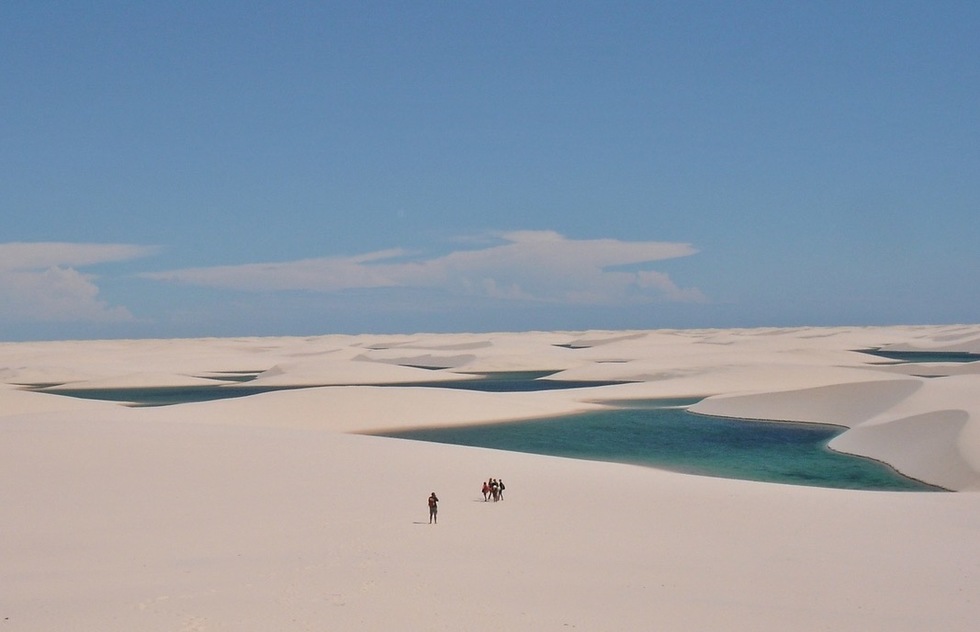 In the northeast of Brazil lies one of the country’s most striking landscapes—Lençóis Maranhenses National Park, where white sand dunes stretch for miles. Once a year after the rainy season, the valleys between the slopes fill up with freshwater pools. The best time to go is between June and August, when the rains have gone but the natural lagoons remain, offering cool relief from the hot sun. Despite its eerie beauty, the park remains relatively unknown. You can enjoy days of guided trekking without seeing a soul. 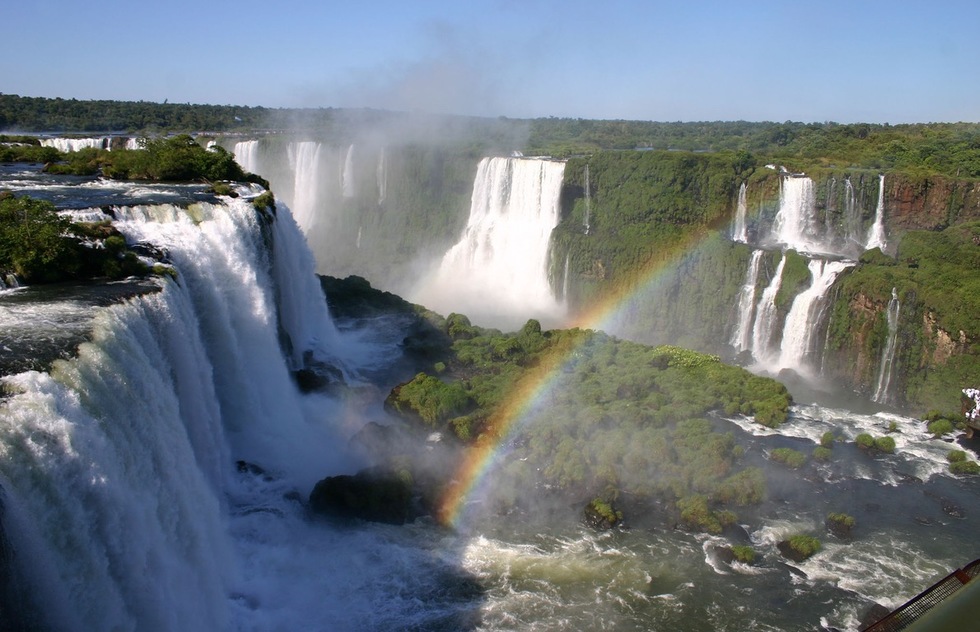 Straddling the border of Argentina and Brazil—and taking up an area twice as wide as Niagara—the Iguaçu National Park is home to the largest waterfall system in the world. There are between 150 and 300 waterfalls here (the number doubles during the rainy season), all of them surrounded by dense forest with dozens of hiking trails. At 80 meters (262 ft.) tall, the most famous and largest cascade is the Devil’s Throat, where a wooden platform juts out over the edge of the thundering water, allowing you to peer down into the misty depths. 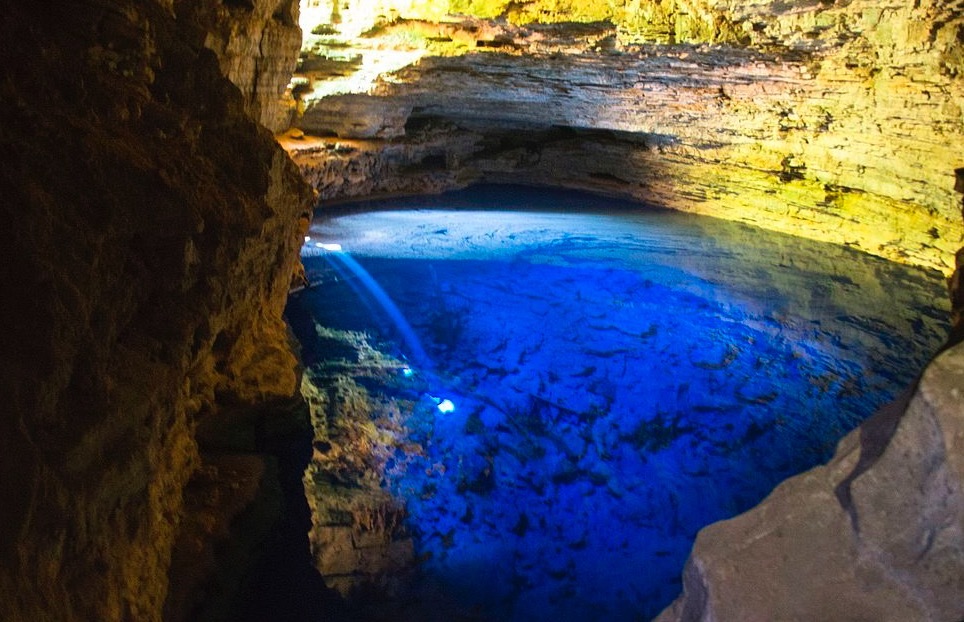 Spread across the plains of Bahia in northeastern Brazil, the Chapada Diamantina is a vast national park and one of the country’s most beautiful. Deep, flat-topped canyons carve into the earth, providing countless hiking routes, such as the popular eight-day Grand Circuit trek. Besides hiking, you can add rafting and climbing to your list of things to do—just make sure you spare some time to see the Poço Azul and the Poço Encantado. These two underground caves are filled with crystal-clear water that glows an electric blue thanks to mineral deposits left by the subterranean river. 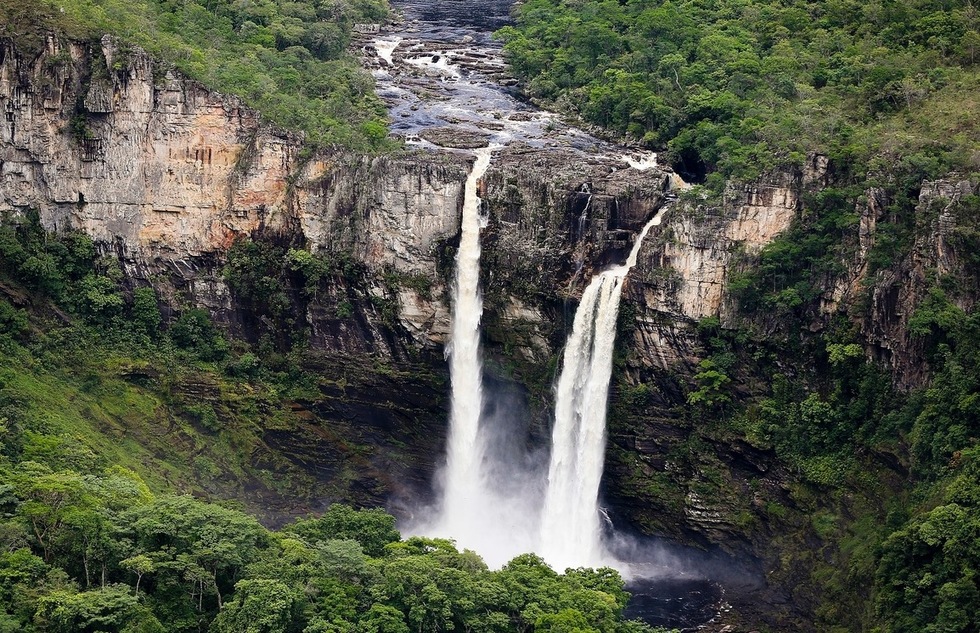 The Chapada dos Veadeiros National Park lies on top of an estimated 1.8-billion-year-old plateau, meaning that the rock formations here are some of the world’s oldest. Among the highlights: Moon Valley, where eons of erosion by water and sand have left rocks pockmarked with otherworldly dips and hollows. Elsewhere, large canyons transform meandering rivers into roaring waterfalls (like the ones pictured). On the valley floors, wild orchids blossom and exotic creatures such as the maned wolf and red-breasted toucan make their homes. 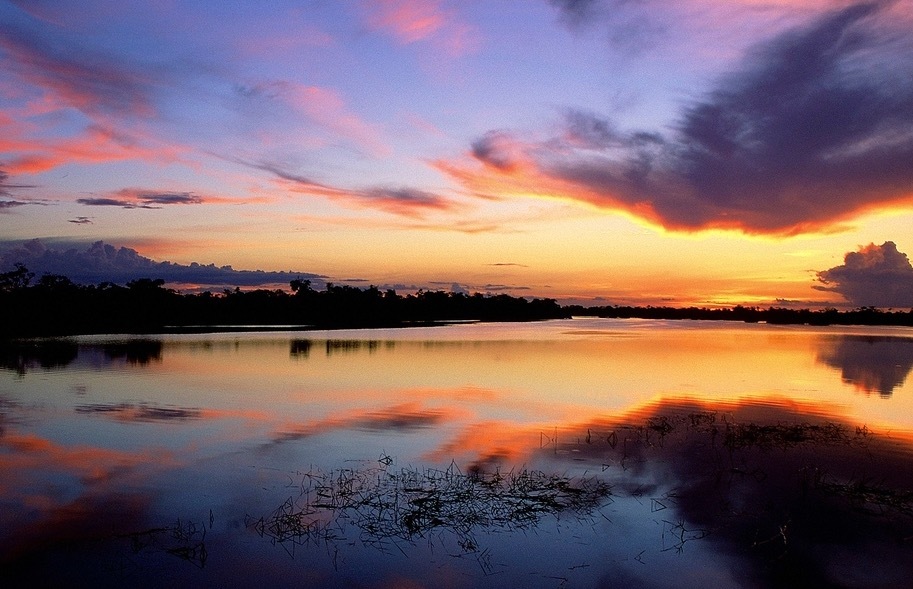 The park that best exemplifies Brazil’s reputation as a vast jungle is Jaú National Park. Located in the extreme north of the country in the Amazonas state, Jaú is one of the largest protected areas in Brazil. It's mostly made up of dense rainforest and rich, fertile rivers. This biological wonderland is home to protected animals such as the manatee and the giant otter, plus thousands of plant and insect species. The thick vegetation means some areas are impenetrable, but hiking is possible in some regions—although it’s best to go with an experienced guide. 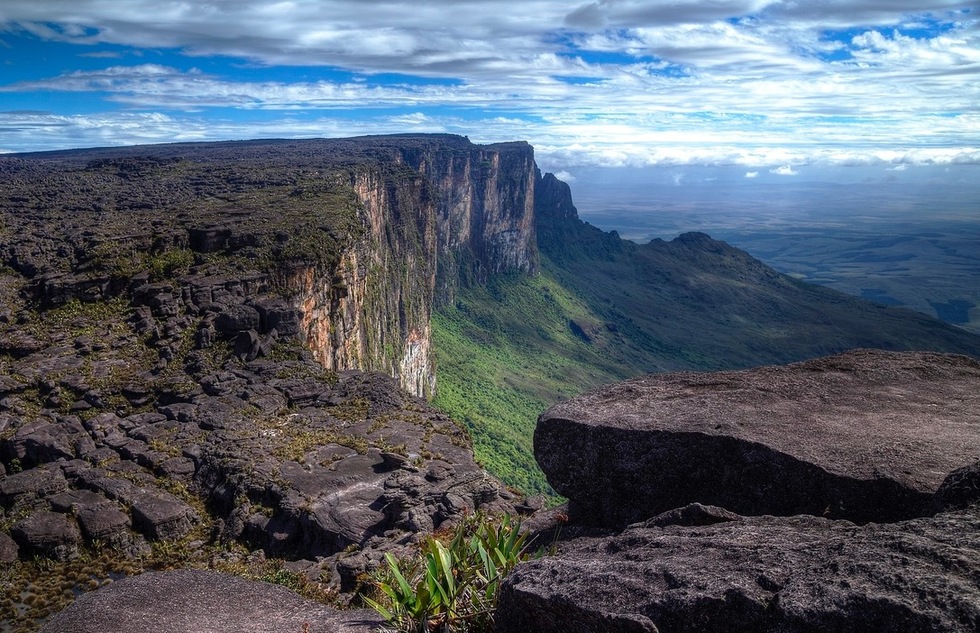 If tough hikes that come with spectacular views as a reward are up your alley, then save space on your itinerary for Monte Roraima. The main attraction here is its namesake, a colossal tabletop mountain squatting on the borders of Brazil, Venezuela, and Guyana. At around two billion years old, the rock is among the oldest in the world. It supports a unique ecosystem including black frogs and carnivorous plants. Hiking to the top and back takes about six tough days through varied landscapes, past dozens of waterfalls, and culminating in that showstopping view at the top. 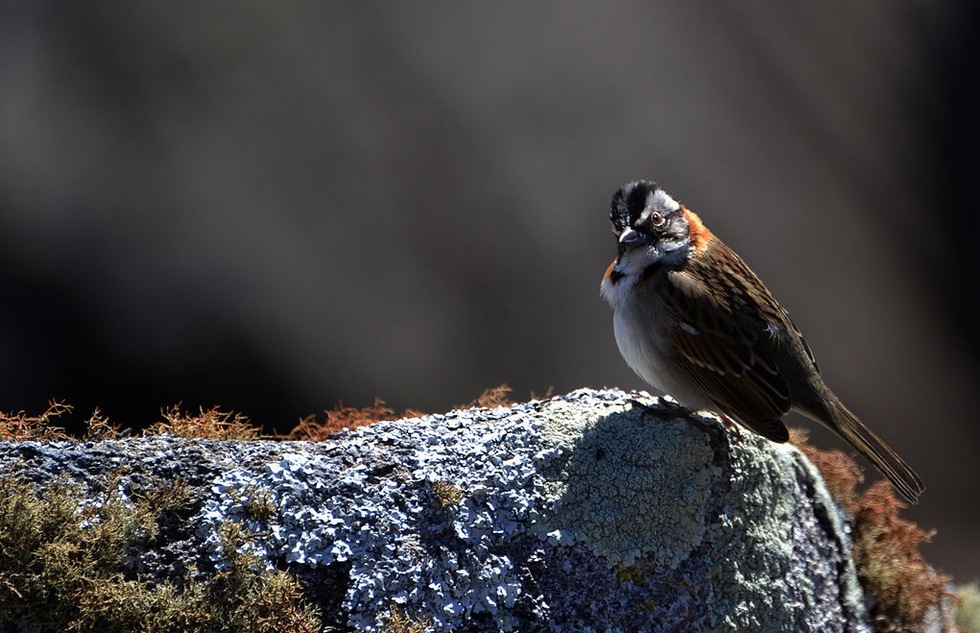 Founded in 1937, Itatiaia is Brazil’s oldest established national park. It has a long-standing reputation as a rich spot for birders, with more than 200 avian species—including toucans and eagles—living in the region. The park encompasses grasslands, dense woodlands, and waterfalls such as the Bridal Veil, which tumbles 40 meters (131 feet) into a churning mist at the base. Hikers can amble along sedate trails or tackle the Agulhas Negras Peak, the fifth-highest in Brazil at 2,791 meters (9,157 ft.). 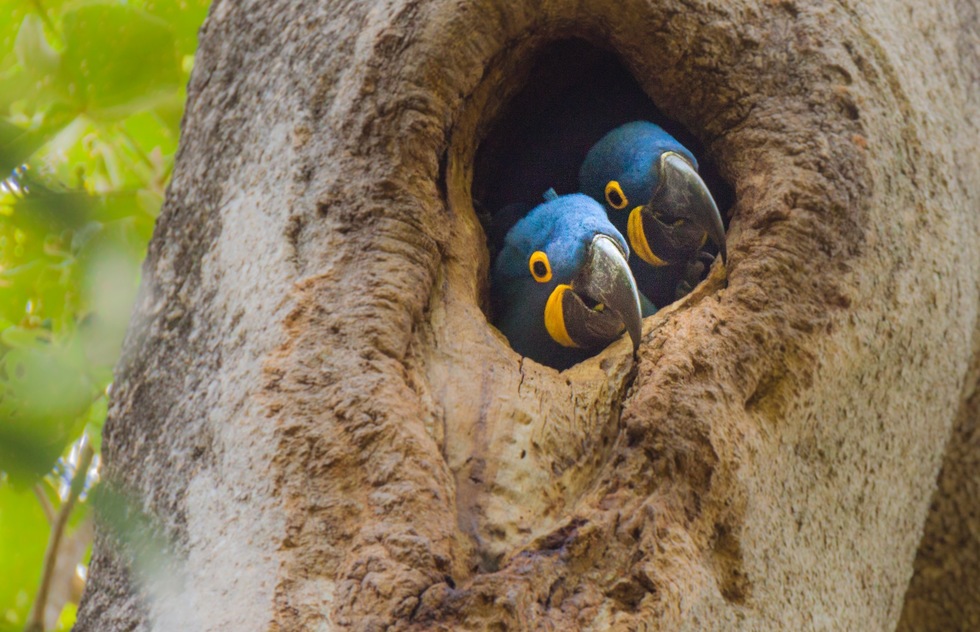 It’s a common misconception that the Amazon is the world’s best place for wildlife watching. The reality, though, is that most of the animals there keep out of sight. Brazil’s best place to actually spot creatures such as jaguars, caimans, and hyacinth macaws is the Pantanal Matogrossense National Park. The Pantanal is the world’s largest tropical wetland, where the rainy season creates fertile lagoons drawing all sorts of wildlife, including several endangered animals such as the South American tapir. Hiking trails are plentiful in the Pantanal, although the rainy season hinders trekking due to floods. Visit between July and October to discover why Frommer’s named this area one of the Best Places to Go in 2017.