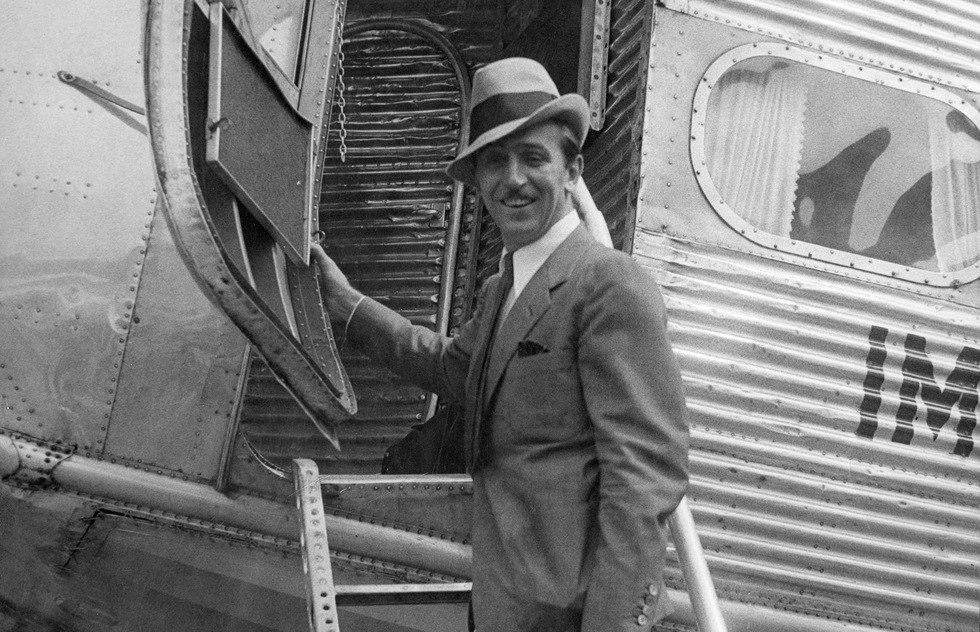 From his earliest years, Walt Disney aimed to expand his boundaries: physical, creative, and intellectual. Throughout his life, he was a frequent and enthusiastic tourist, visiting destinations around the United States and across the globe. Whether attending a premiere, supervising a film production, or simply vacationing with his family, the all-American Walt Disney became a citizen of the world—from Denmark to Argentina, England to Greece, Austria, Chile, Canada, France—all of them welcomed Walt Disney as an emissary of his good name, good works, and good reputation.

Jeff Kurtti is the author of Travels with Walt Disney: A Photographic Voyage Around the World. 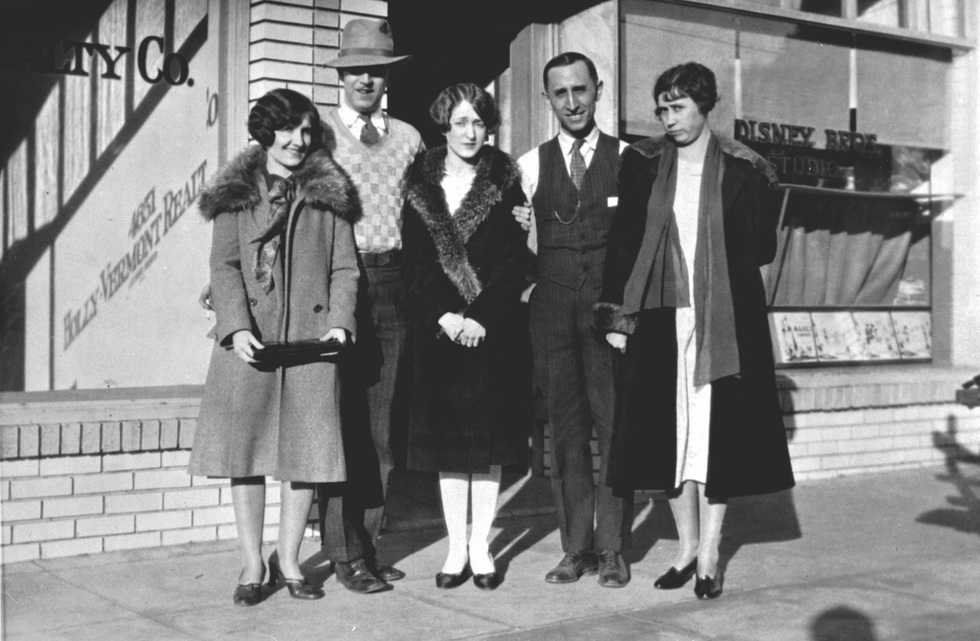 Here's Walt, his wife Lillian, his brother Roy, Roy's wife Edna, and sister Ruth Disney in front of the Disney Brothers Studio at 4649 Kingswell Avenue in the Los Feliz neighborhood of Los Angeles, California, 1925. This block of storefronts in the Kingswell Building still stand east of the intersection of Vermont and Kingswell Avenues, as does uncle Robert’s house a few blocks east at 4406 Kingswell, where Walt stayed upon his arrival in California in 1923. 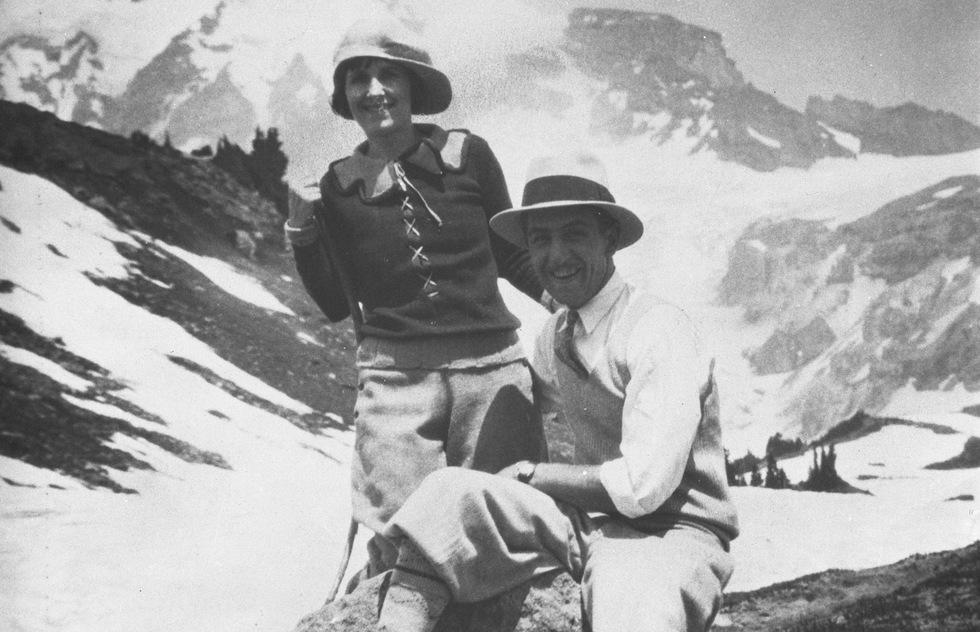 Walt Disney married Lillian at her brother’s home in Lewiston, Idaho, on July 13, 1925, after which the newlyweds headed west for a honeymoon at Washington state’s Mount Rainier National Park and in nearby Seattle. Walt and Lillian remained married—and traveled together often—for the rest of his life. 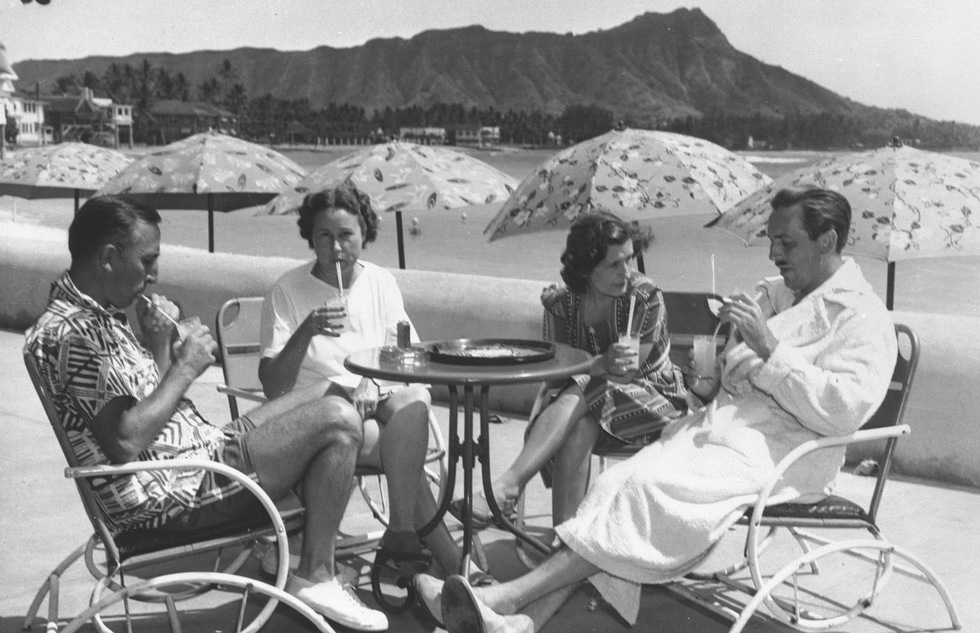 In September of 1939, Walt and Lilly sailed to Hawaii on the Matson Liner Lurline and stayed at the Royal Hawaiian Hotel, 2259 Kalākaua Avenue, Waikiki (it's still open today). They were accompanied by Walt’s brother and business partner, Roy, and his wife, Edna. 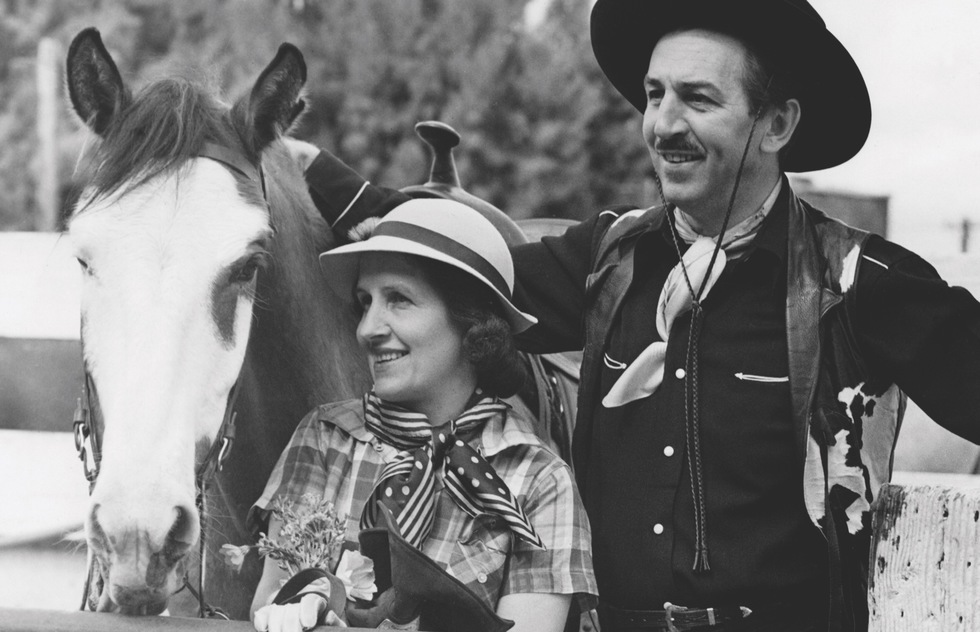 Walt was a devoted equestrian. He played polo with the Hollywood elite, and he was a member of the Rancheros Visitadores (Visiting Ranchers) equestrian club. Here he is seen with his wife Lilly at the B-Bar-H Ranch, Bubbling Wells Road and El Serape Trail, outside of Palm Springs, about 100 miles east of Los Angeles. The ranch is gone, but its entry arch remains as a historic landmark. Walt and Lillian would frequently escape work to stay at Smoke Tree Ranch—which does still welcome guests. 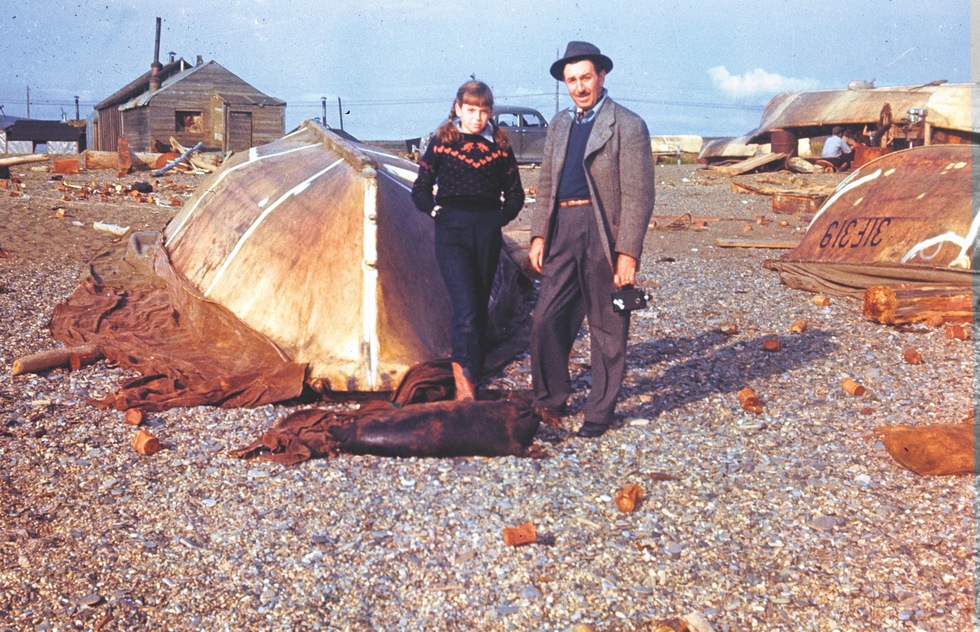 In one of his first and most unusual movie location visits, Walt, accompanied by his young daughter Sharon, journeyed to Alaska in August of 1947. They spent several days in Candle, a tiny settlement on Alaska's arctic west coast, and are said to have observed the ongoing filming of what would become the first Disney True-Life Adventures picture, Seal Island. 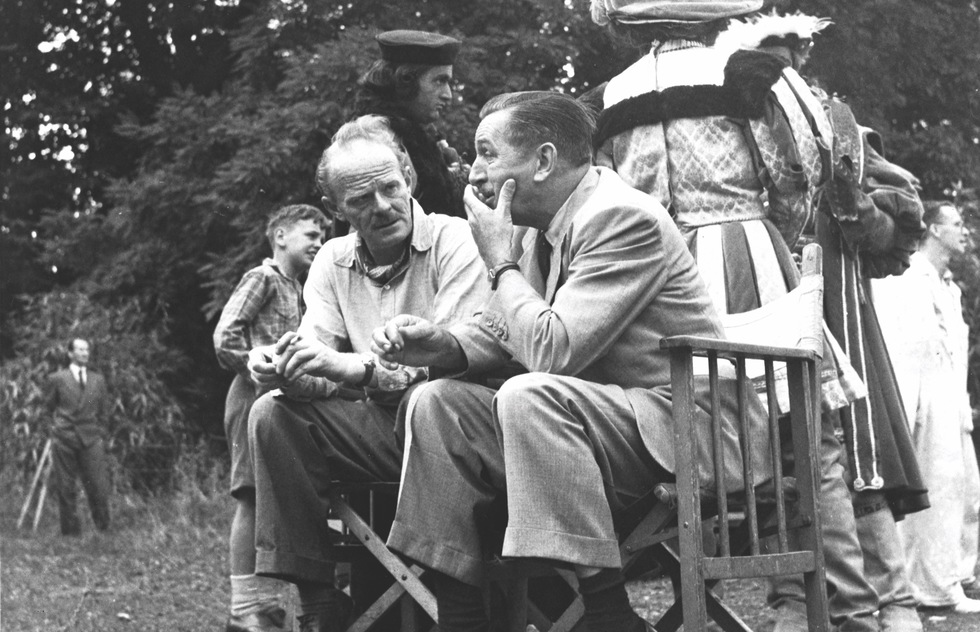 Walt on location in Beaconsfield, Buckinghamshire, England. The Hollywood Reporter, July 17, 1952, in a dispatch from London dated Friday, July 11: "Walt Disney arrived in town this week and got right down to work on his new British picture, The Sword and the Rose. Location shooting will be done by a second unit at Wilton Park, Beaconsfield, about 20 miles out of London, and will start next Monday." The movie was released a year later. 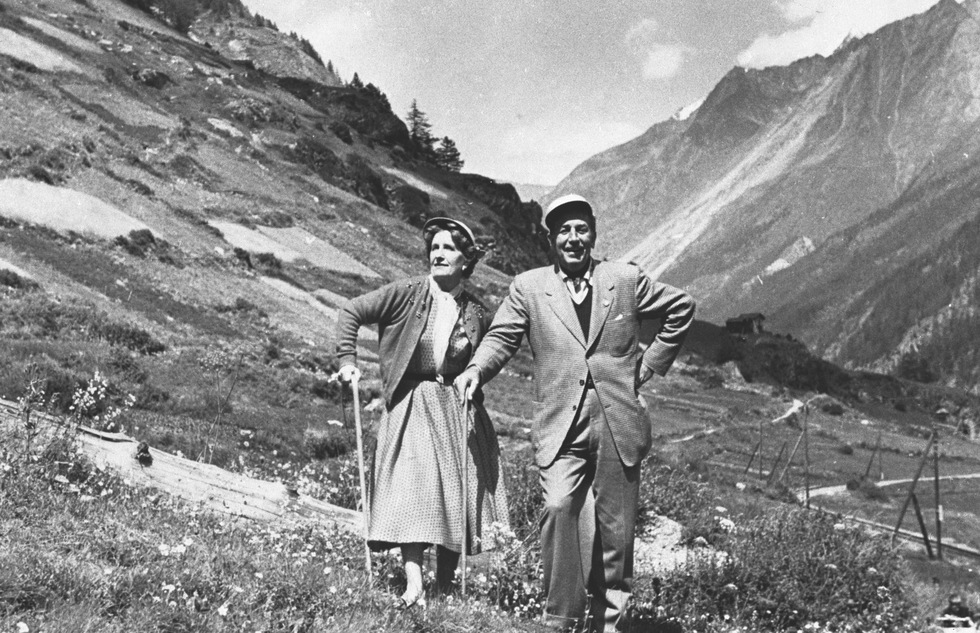 When Walt and Lilly visited Switzerland during their European travels in the summer of 1953, he fell in love with the country—especially the mountain village of Zermatt, in the shadow of the majestic Matterhorn. Zermatt inspired the 1959 live-action adventure Third Man on the Mountain, plans for the Matterhorn roller coaster at Disneyland, the ceremonies and entertainment at the 1960 Winter Olympics, and Disney's own (unrealized) ski resort, Mineral King. 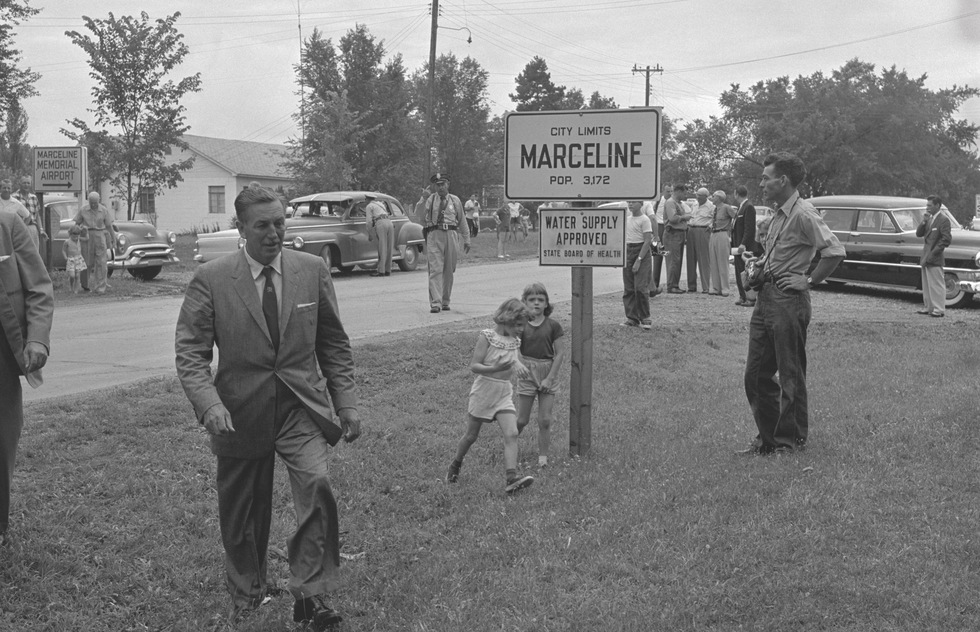 On July 4, 1956, Walt and Roy Disney returned to their boyhood home of Marceline, Missouri. While there, they dedicated the Walt Disney Municipal Park and Pool and visited sites of their youth, including the Santa Fe Railroad Depot (today the Walt Disney Hometown Museum). Walt said to the assembled families who came to greet him, “I lived in Marceline. My best memories are the years I spent here. You children are lucky to live here." His memories of Marceline informed the design of Disneyland's Main Street, U.S.A. 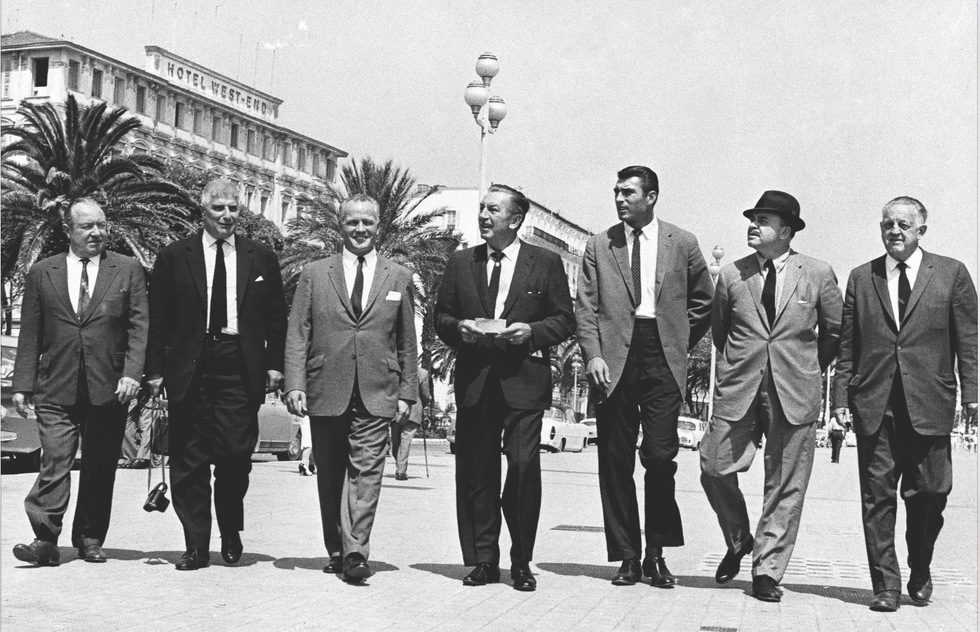 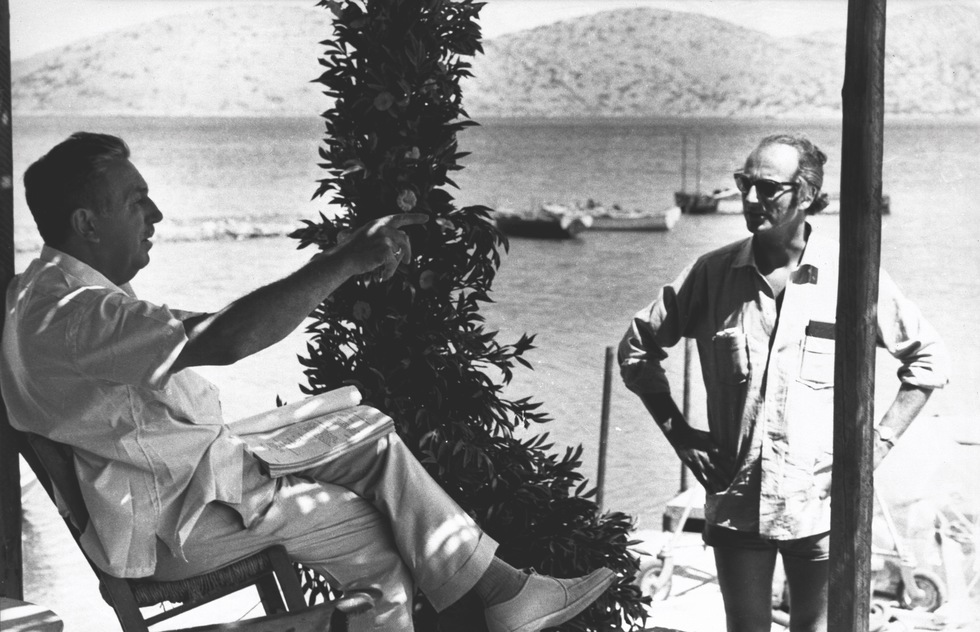 Set against the sun-bleached beauty of the Greek isle of Crete, The Moon-Spinners was based on the 1962 novel by Mary Stewart. Rather than shoot on indoor sound stages or at Southern California stand-in locales, the production went on location to Agios Nikolaos, Crete, for rich Greek authenticity. Walt and Lillian visited the set in September of 1963 and as usual, Walt was not merely a visitor on the set—he was active as the producer of the film. 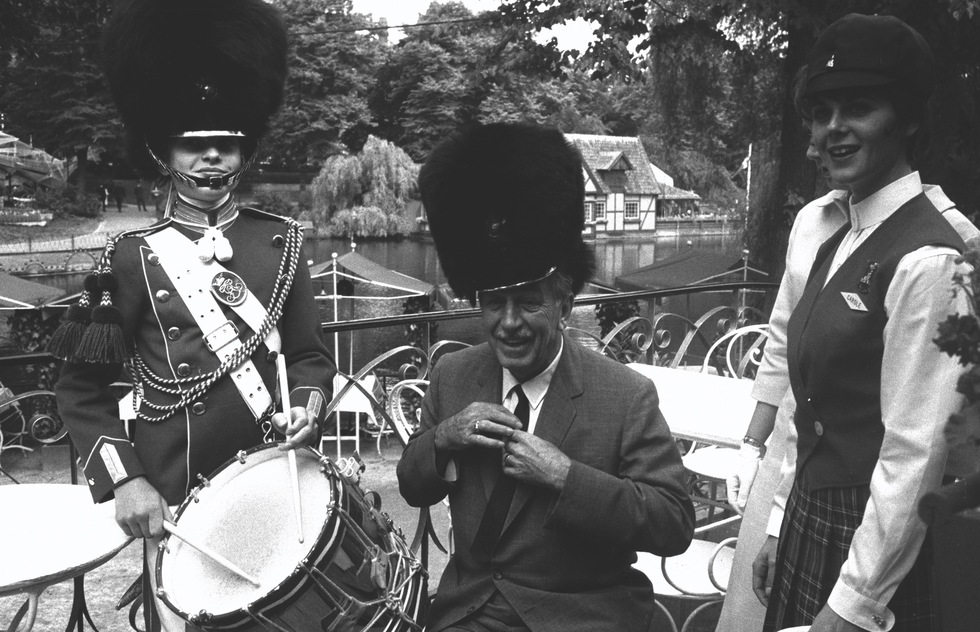 Tivoli Gardens was one of Walt's favorite destinations when he was in Europe. He visited the Copenhagen landmark as often as he could. Many of its elements and philosophies guided the design of Disneyland. On a 1964 trip, Walt was convinced to don the bearskin hat of one of the park's Boys Guard drummers for a photo. 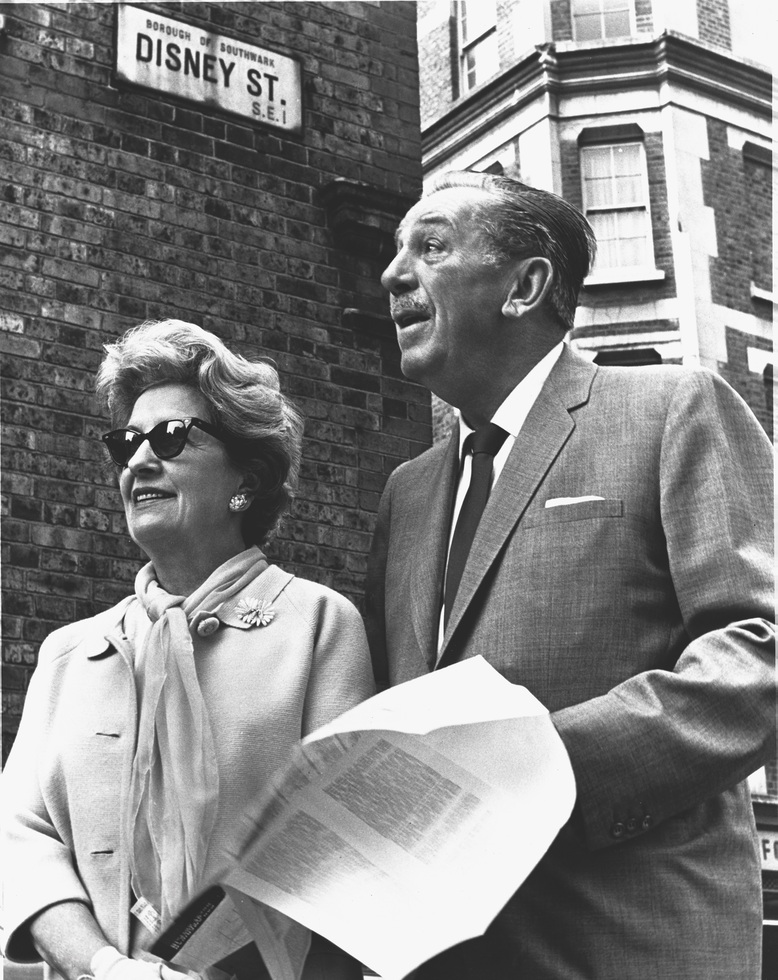 Walt and Lilly explore a street with a familiar name in London, 1966. The tiny lane is in the Borough of Southwark, adjacent to Little Dorrit Park and south of Borough Market and London Bridge. Walt was amused to find it was once known as Dunghill Lane. 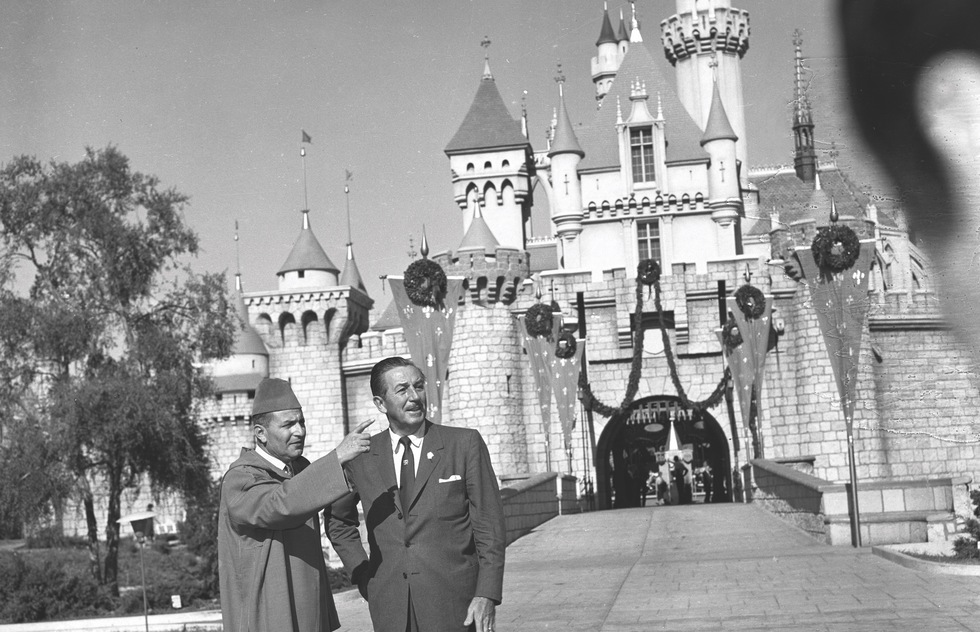 Walt’s creations had a global reach even during his lifetime. One enterprise in particular, though, brought the world back to Walt. By the time of his passing in late 1966, Disneyland in Anaheim, California, had welcomed somewhere between 55 and 58 million guests since opening in 1955, and it had hosted dignitaries, celebrities, and even royalty from every part of the world. Walt was always a proud and delighted host, eager to present his beloved park and demonstrate his entertainment innovations to VIPs such as King Mohammed V of Morocco, shown here with Walt in December of 1957. 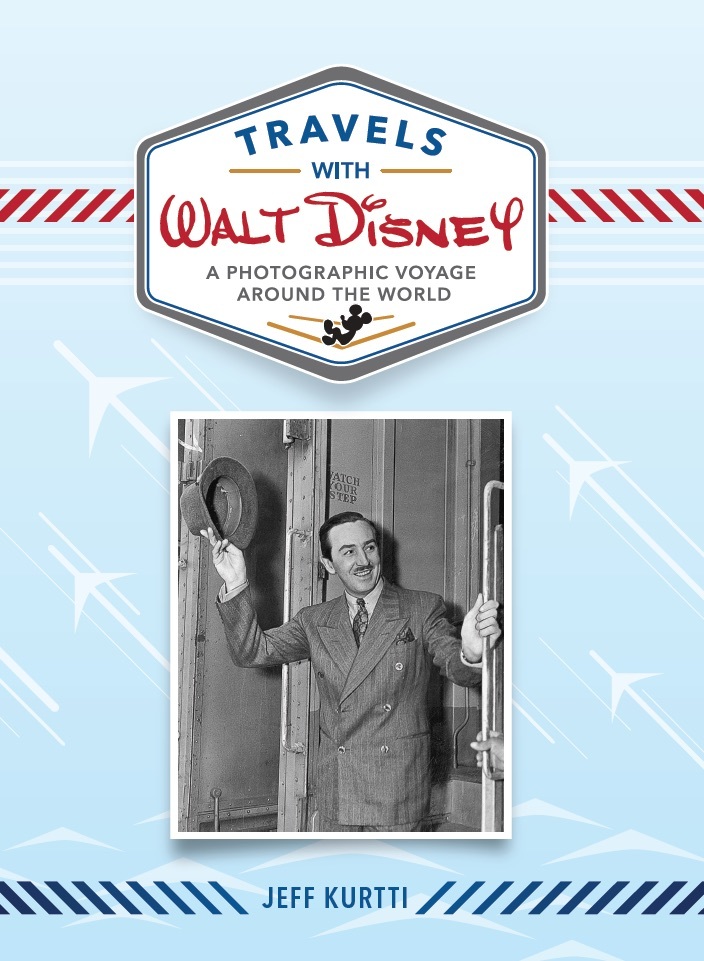 Travels with Walt Disney: A Photographic Voyage Around the World

There's a lot more to be found in the book Travels with Walt Disney: A Photographic Voyage Around the World (published by Disney Editions), including seldom-seen and never-before-published photographs, eyewitness recollections, and anecdotes, all arranged in a kind of travel scrapbook that Disney himself might have used to document his excursions.