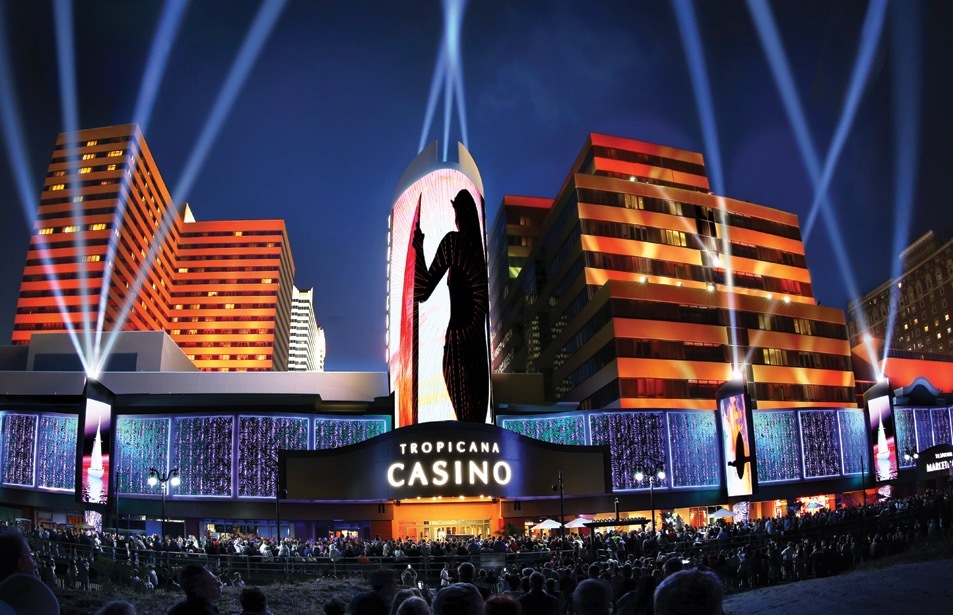 The Boardwalk Is Back: New and Classic Atlantic City Casinos, Beaches, and Dining

By
By Marla Cimini

Like the ocean it’s named after, Atlantic City has risen and fallen with the tides over the years. The New Jersey icon was the Gilded Age’s preeminent playground by the sea, the Prohibition era’s wild gangland capital (as depicted in HBO’s Boardwalk Empire), and, following the legalization of gambling in the 1970s, the East Coast’s answer to Las Vegas. More recently, the resort town’s fortunes have been at an ebb, thanks to an economic downturn that forced five casinos to close their doors.

But after several dry years, Atlantic City is surging once again, with new casinos, new renovations, and a new energy. First-time and returning visitors to the Boardwalk will find an all-American classic that has finally gotten a 21st-century makeover. Of course, some old standbys don't need changing, and so we've included a few of those reliable attractions in our look at the newly revitalized Atlantic City. 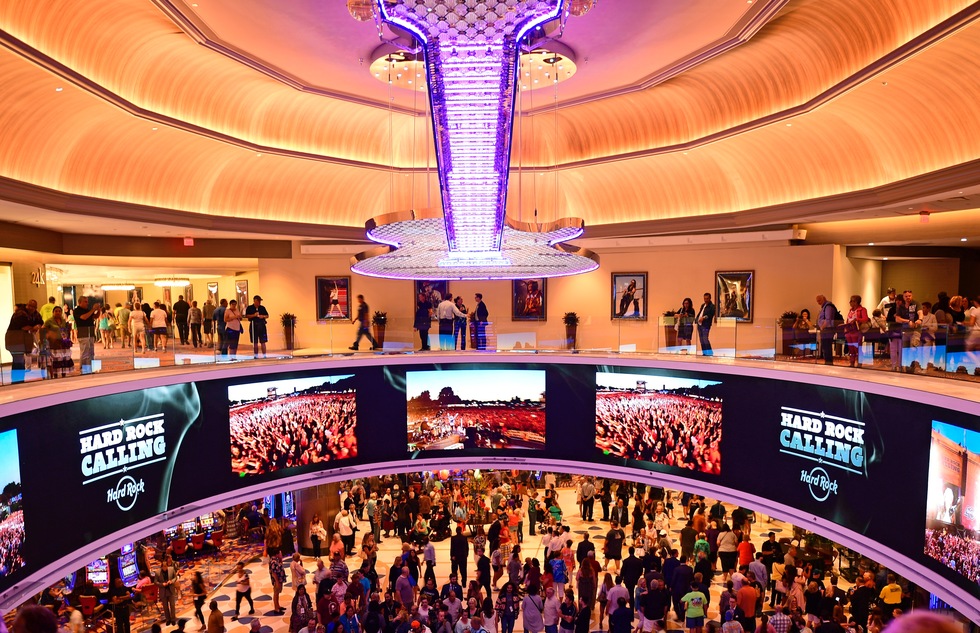 One of the most encouraging signs of an Atlantic City renaissance is the 2018 opening of the Hard Rock Hotel and Casino (1000 Boardwalk) in the building once occupied by the Trump Taj Mahal, which closed in 2016. A top-to-bottom overhaul banished the golden gaudiness of the previous iteration, replacing it with Hard Rock’s bold colors and guitar god aesthetic. Rock memorabilia on display: Elvis Presley’s Rolls Royce, John Lennon’s handwritten lyrics for “Imagine,” and a guitar signed by New Jersey’s own Jon Bon Jovi. There are several live music venues, too, and guests have access to perks such as curated playlists and electric guitars delivered to their rooms for free (on a first-come, first-served basis). 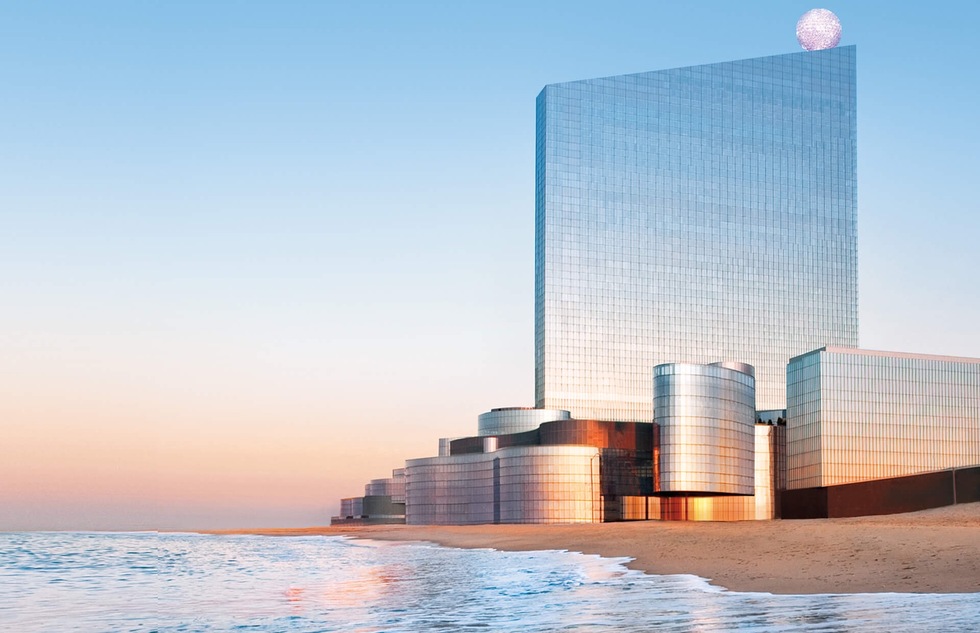 Next door to the Hard Rock is another once-shuttered property that has reopened under new management: Ocean Resort Casino (500 Boardwalk). It’s located in the former home of the Revel—the tallest building in town. Affiliated with Hyatt’s Unbound Collection, the Boardwalk hotel has 1,400 freshly renovated rooms and suites, each with views of the Atlantic Ocean. If you can tear yourself away from the windows, make a point to sample the dining options, including chef Marc Forgione’s American Cut steakhouse and two restaurants from chef Jose Garces (Amada and Distrito) specializing in Latin American and Spanish fare. As in the Revel days, the hotel’s party scene ranks among the Boardwalk’s wildest. Cut loose at the pool-centered HQ2, featuring a robust lineup of world-famous DJs. 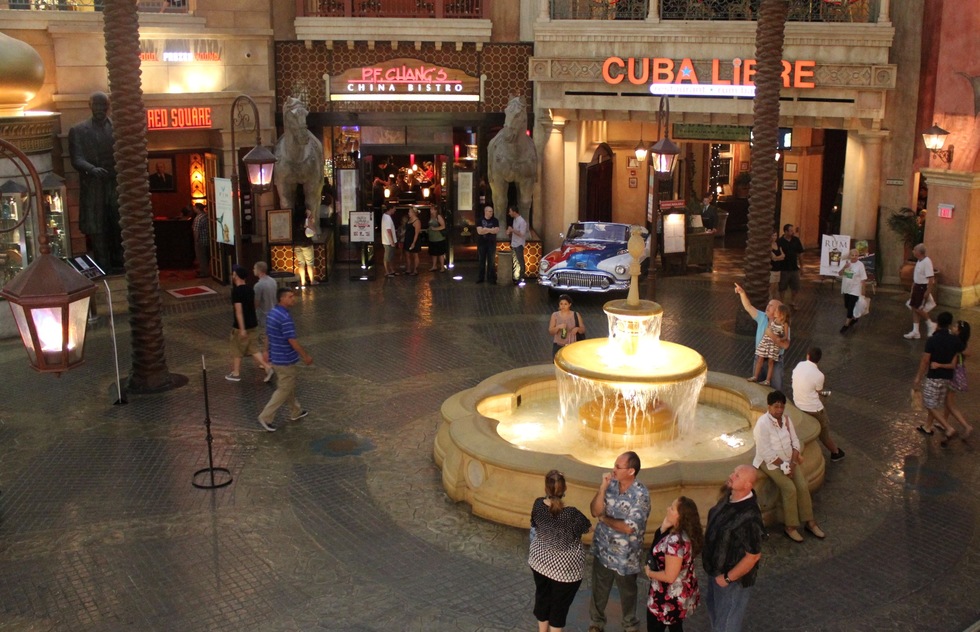 The Boardwalk's southernmost resort, the imposing Tropicana (2831 Boardwalk) is always buzzing with activity throughout the casino, restaurants, and expansive shopping area (pictured above). In recent years, Tropicana has invested over $200 million in refurbishing this behemoth, which has 2,400 rooms, 26 restaurants, and 20 bars and lounges. Among the improvements: a pedestrian walkway—sorry, “sky bridge”—connecting the main building with the retro-hip Chelsea Tower. Cross the bridge to reach the Chelsea Five Gastropub (a restaurant with panoramic ocean views) or the rooftop Cabana Five Bar and Pool Deck for live entertainment, food, drinks, and cabana rentals. 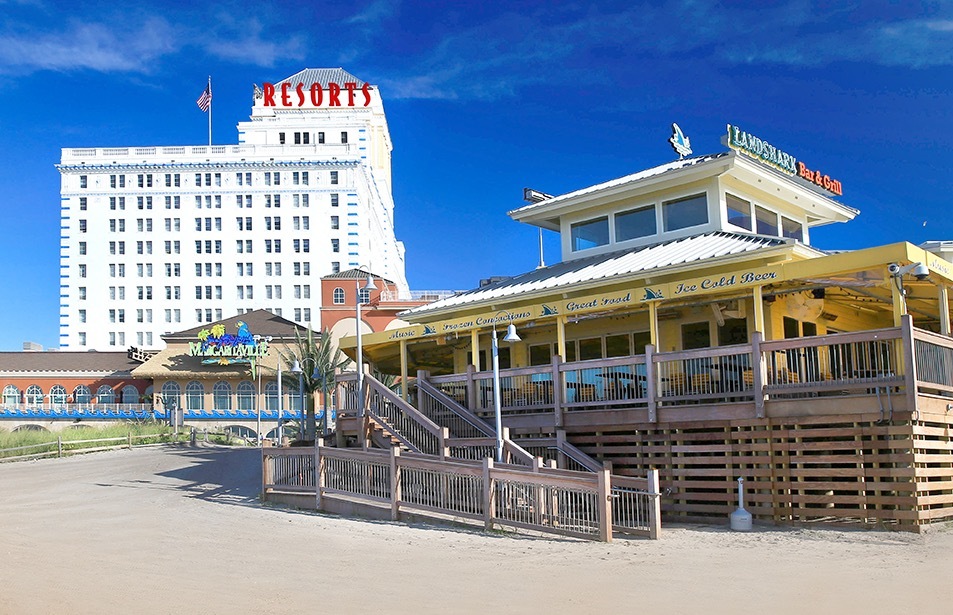 It’s been four decades since Atlantic City’s first-ever casino—and the first legal casino in the United States outside of Nevada—opened its doors to massive crowds. Just in time for that anniversary, Resorts Casino Hotel (1133 Boardwalk) completed a $30 million makeover of its nearly 500-room Ocean Tower. Bathrooms, furniture, carpets, artwork, and even the wallpaper all got an upgrade, with a coral- and sand-colored palette recalling the beaches just outside. Elsewhere onsite you’ll find 10 restaurants, shops, an indoor-outdoor swimming pool, and, of course, the 80,000-square-foot casino that put the place on the map. The property is just a 5-minute walk from the Steel Pier and adjacent to the Hard Rock Hotel & Casino, which connects to Resorts by a pedestrian walkway. 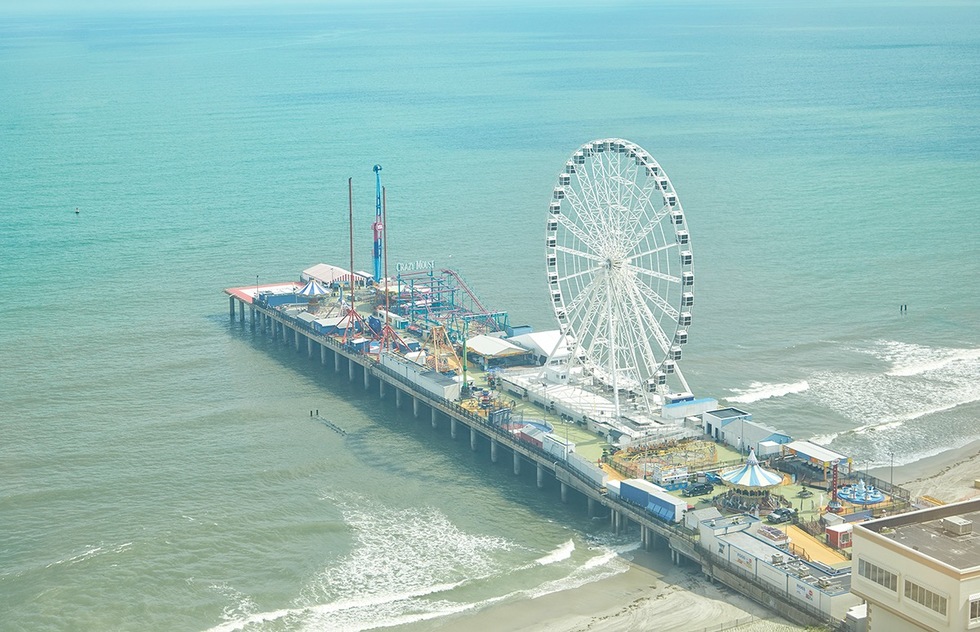 Even one of the Boardwalk's oldest attractions has a big new draw. Decades ago, the Steel Pier (1000 Boardwalk) was a massive indoor-outdoor entertainment destination known for dances and musical performances (jazz, swing, and, later, rock bands including the Rolling Stones) as well as carnival rides and novelty acts. Most memorably, this was where the famed diving horse and its rider would jump off a 40-foot-high platform into a 12-foot-deep pool of water—an attraction that ran off and on from the 1920s to the ‘70s (and you thought horses dragging carriage rides had it bad). Due to declining tourism, the pier closed not long after the last equine plunge, but the amusement park was reopened in the 1990s and remains in operation today. An eye-catching addition in late 2017 was The Wheel, a 227-foot-tall Ferris wheel with 40 gondolas offering stunning views of the ocean and shoreline. From the pier, you can reach your next destination by hopping on a tram car (for a few bucks you can ride all day) or an old-school rolling chair, a two-seated wicker vehicle that functions like a rickshaw in reverse, with a driver pushing from behind. 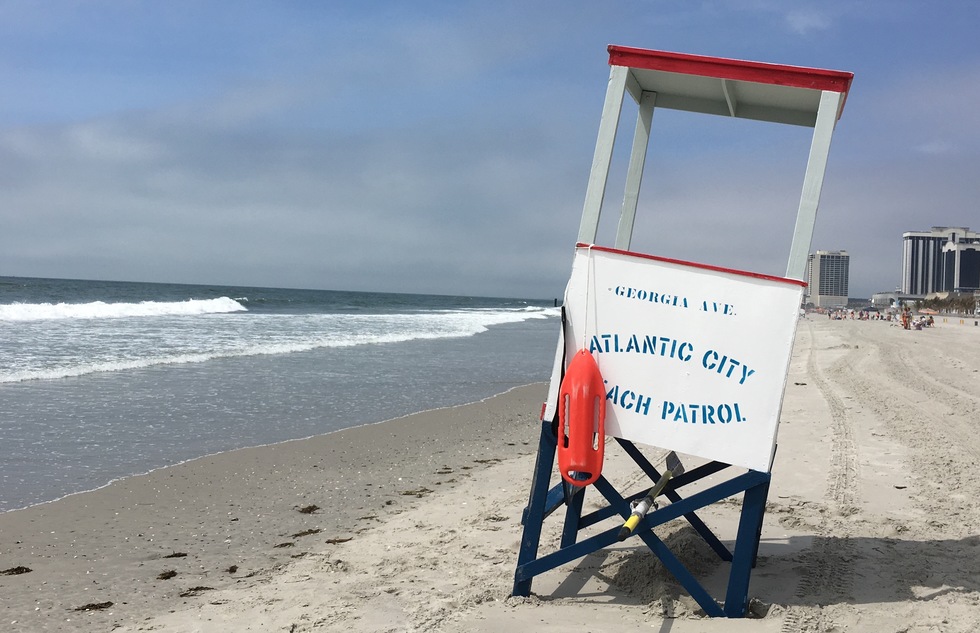 Marla Cimini
On the Beach

Now let's take a breather. It can be easy to forget in a casino, but the original draw to Atlantic City was its wide beaches and their soft golden sand. Sun worshippers can rent chairs and umbrellas in front of several Boardwalk hotels, including Resorts, Tropicana, and Hard Rock. (Daily rates are usually above $30, sometimes less if you have a casino loyalty card). There’s also the public Atlantic City Beach, one of the few stretches of sand in the state where paid admission passes (“beach tags” in Jersey lingo) are not required. If you’re into surfing, Atlantic City has a great shore break—rent boards and take lessons at AC Surf School, located at New Jersey Avenue. All along the shore, casual walk-up options for food, fruity cocktails, and live music abound. 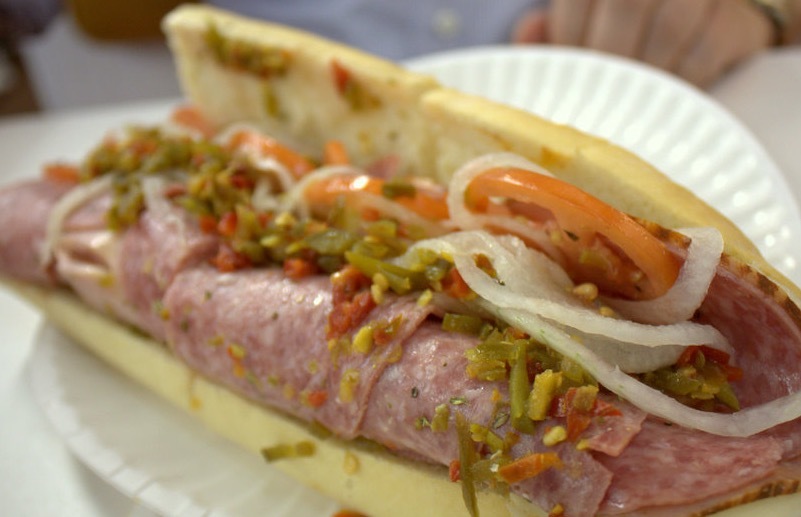 Some Atlantic City institutions need no improving. One of them is the White House Sub Shop (2301 Arctic Ave., not far from the Tropicana), which has been serving up cheesesteaks, Italian subs, and other delectably unhealthy overstuffed sandwiches since 1946. Among its many high-profile fans was Frank Sinatra, who frequently stopped by when he was performing in town and, when he wasn’t, had the hoagies flown across the country to his home in Palm Springs, California. The sandwiches are just that good. For the quintessential experience, order the White House special, which involves extra helpings of salami, ham, provolone, and capicola. Be sure to arrive early at lunchtime—it’s not unusual to see a long line of hungry guests waiting outside. 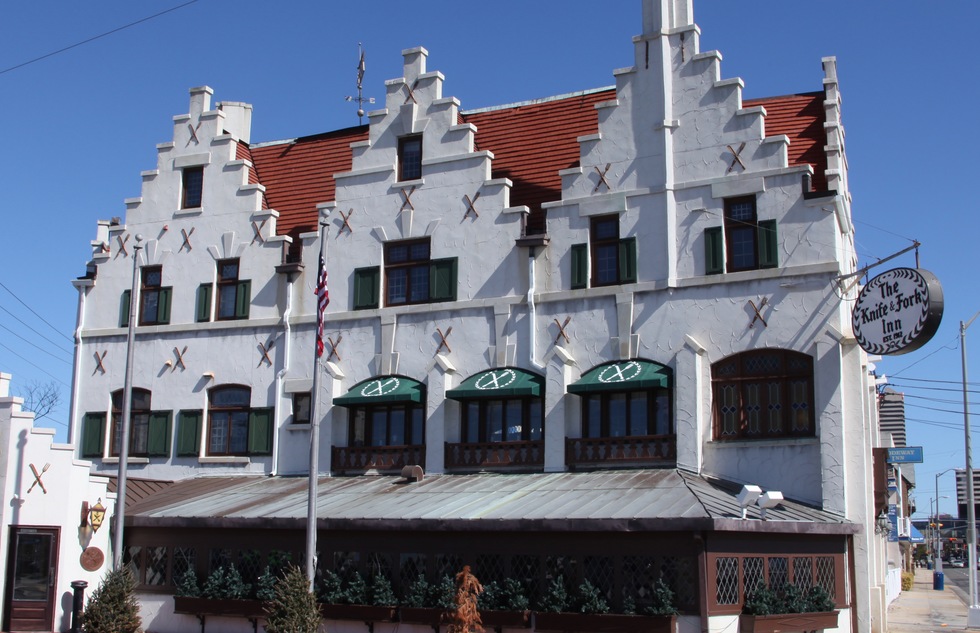 Another storied Atlantic City dining landmark, the Knife and Fork dates back to 1912. It’s nearly impossible to miss—the bright white castle-like facade is adorned with green shutters and checkered with a pattern of decorative crisscrossed knives and forks. The location is super-easy to find, too: It’s situated where three main streets converge (Atlantic, Pacific, and Albany Avenues) in the heart of town. The closest casino is Tropicana, several blocks north.

Originally a men’s club, it was once a frequent haunt of infamous racketeer Enoch “Nucky” Johnson. During Prohibition, the restaurant was known to serve alcohol, for which the police eventually raided it. A few years ago, the Knife and Fork was restored to peak condition, with a refreshed exterior, expanded bar area, and new wine room. The place maintains a strong sense of nostalgia, though, particularly in dining rooms adorned with black-and-white vintage photos of the beach and Boardwalk as well as shots of Sinatra and his Rat Pack cronies. The menu is hearty: steaks, seafood, an extensive wine list, and housemade desserts.

And while we're on the topic of historic spots for food and drink in town, here's another we can't resist . . . 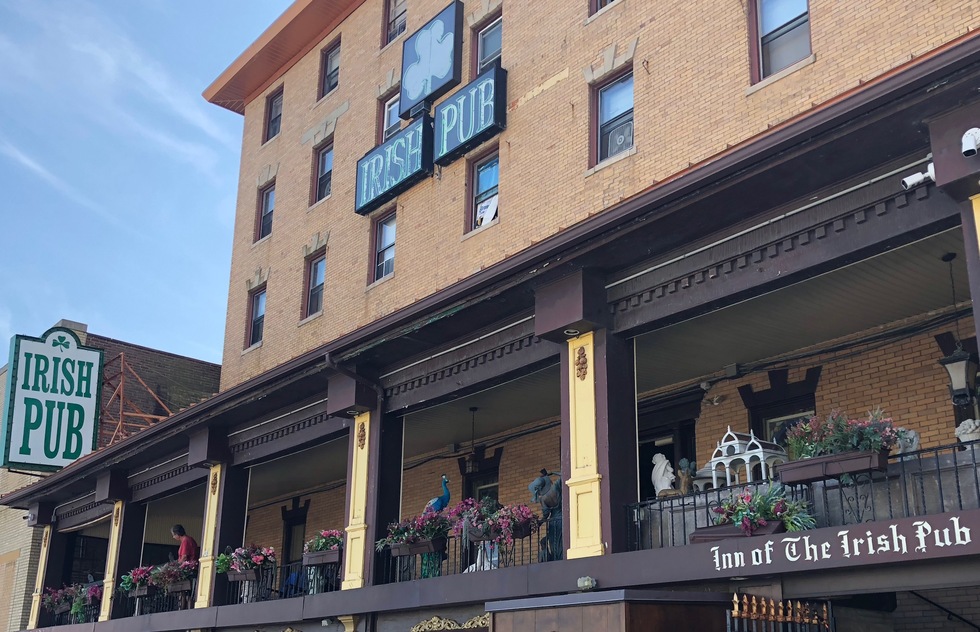 Atlantic City street names aren’t the only references made to the town in Monopoly. Locals say that the board game’s red hotel pieces were modeled (in shape, not color) on this building, constructed in the 1800s and repurposed in the 1920s as a speakeasy. Whether or not that’s true, the Irish Pub, which has been the name of the joint since 1972, is a festive spot for a Guinness, pub grub, live music, and lively conversation right on St. James Place, just steps from the Boardwalk and within a few blocks of Resorts Casino Hotel. 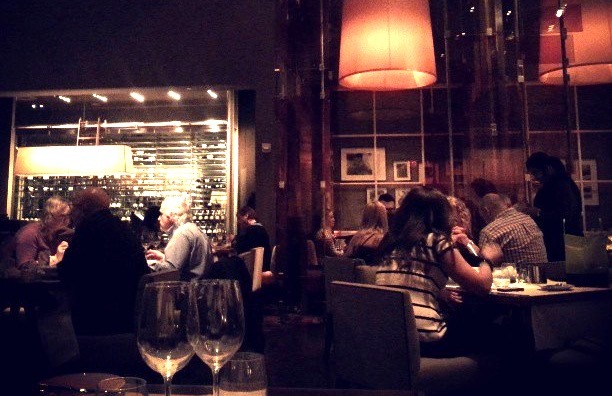 For excitement off the Boardwalk, visit Atlantic City's scenic Marina District, home of the Borgata Hotel Casino & Spa. Known for having upscale amenities along with the expected slot machines, the resort features a sprawling, 50,000-square-foot spa and five fine-dining options from celebrity chefs including Wolfgang Puck (whose American Grille is pictured above), Bobby Flay, and, the resort's newest addition, James Beard Award winner Michael Symon. The hotel's adjacent Water Club at Borgata is even more luxurious—it has another spa and designer boutiques. Although the Borgata is not located on the Boardwalk, it offers a great view of the Atlantic City skyline and operates free shuttles (with towels and beach passes included) to nearby Brigantine Beach. 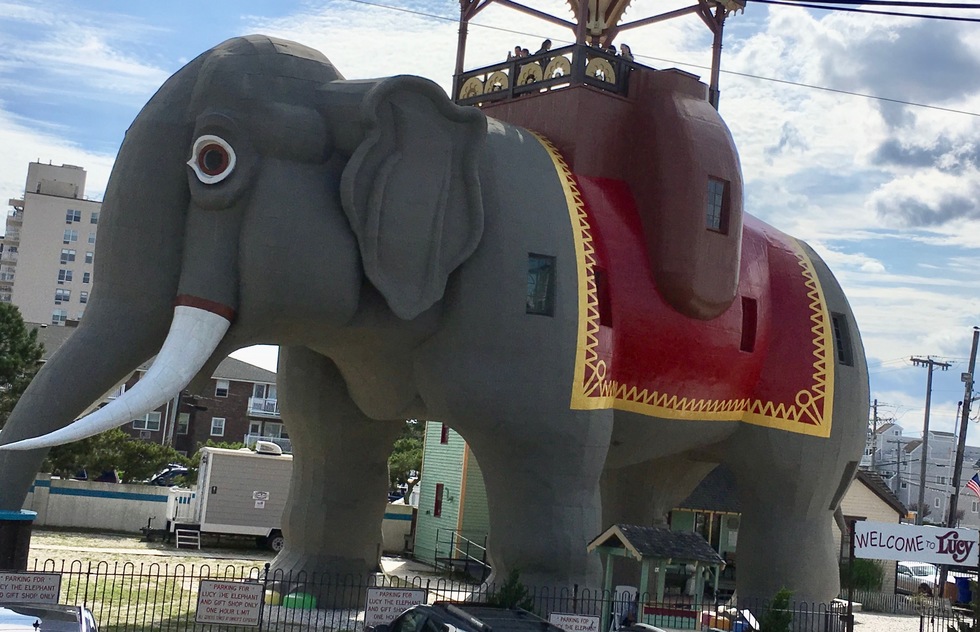 Before you leave town, you've got to pay visits to the two classic landmarks that bookend Atlantic City on its northern and southern sides. To the north stands the Absecon Lighthouse, which dates to 1857 and, at a height of 171 feet, is the state's tallest lighthouse. It’s no longer used to signal vessels in the Absecon Inlet, but you can climb to the top for a view of the shore (donation requested). A short drive south of Atlantic City will bring you to residential Margate City, home of Lucy the Elephant (9200 Atlantic Ave.), a highly Instagrammable National Historic Landmark built in 1881. The 65-foot-high, 60-foot-long wood-and-tin pachyderm was originally created to boost real estate in the area—because who wouldn’t want this plus-size beauty for a neighbor? Today, the structure is open to the public for tours (small fees required) that go every 30 minutes and culminate in an ascent up a spiral staircase inside Lucy to reach panoramic coastal views at the top.