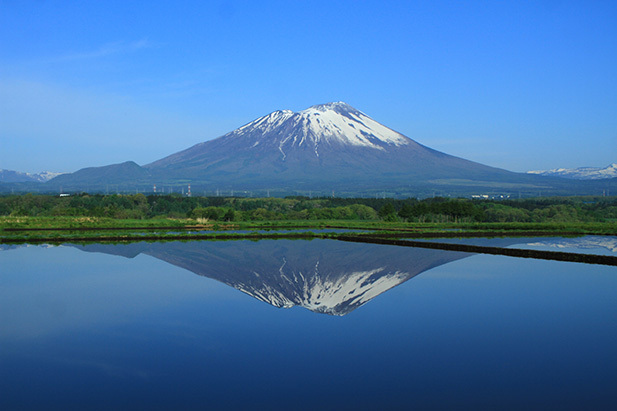 Although a record-breaking 28 million international visitors came to Japan in 2017, only one million made their way to the northern Honshu region of Tohoku. While it’s true that not all coastal areas have fully recovered from the disastrous 2011 tsunami and that cleanup around the contaminated Fukushima power plant continues, Tohoku is actually vast, occupying 20% of Japan’s landmass and spreading across six prefectures (the Japanese equivalent of a state).

Of these, Iwate Prefecture is Tohoku’s largest and is in fact the second-largest prefecture in Japan after Hokkaido. Although its coast was one of the most damaged from the tsunami, its city of Morioka is as far away from Fukushima as Tokyo is, and a lot has happened since then: Japan’s newest national park, the country’s longest hiking trail, two World Heritage Sites, and a stadium for the 2019 Rugby World Cup were all added after the disaster. The prefecture is also home to famous festivals, some of Japan’s best skiing, many hot spring resorts, river gorges, stunning coastal scenery, inviting beaches and some pretty unique dining opportunities.

To reach Iwate from Tokyo, take the Tohoku Shinkansen bullet train to Morioka, the prefectural capital, which takes a little more than two hours. 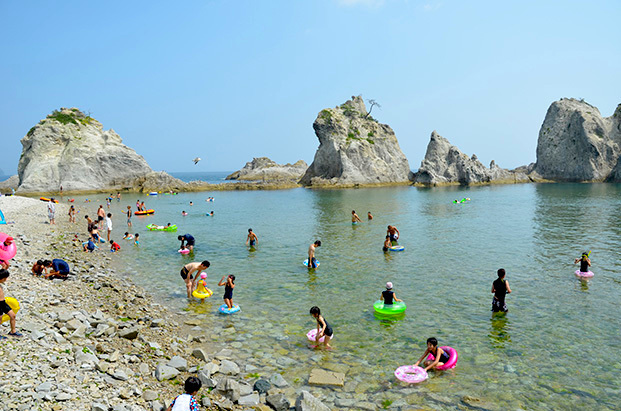 Japan’s newest national park, Sanriku Fukko National Park, was established in 2013 to help foster the recovery of coastal areas in three prefectures hardest hit by the 2011 tsunami—its name translates as Sanriku Recovery National Park. It stretches 137 miles from Aomori Prefecture to Miyaki Prefecture, with the lion’s share running along Iwate Prefecture’s entire shoreline. Coastal rock formations, towering cliffs, beaches, caves, reefs, light houses, fishing villages, and a hiking trail are just some of the highlights that are now protected. Top on the list of scenic viewpoints is the rugged, 650-foot-high Kitayamazaki Cliffs, home to cormorants, peregrine falcons, and osprey. Of the park’s many beaches, Jodogahama Beach (pictured), near the town of Miyako, is considered the best, with crystal clear waters, gentle waves lapping a pebble beach, and rocky islets topped with pine trees, earning it the nickname “Pure Land Beach” in reference to the Buddhist concept of a paradise on Earth. 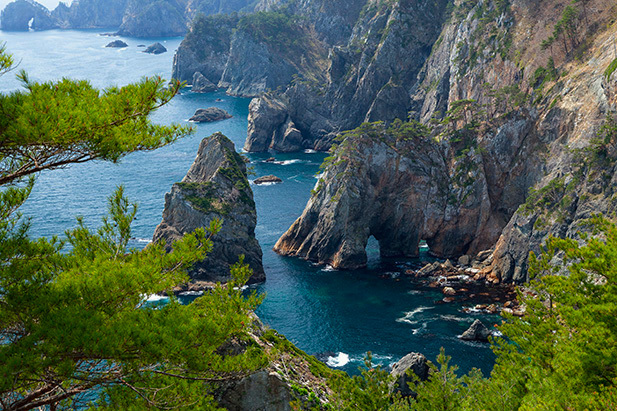 The Michinoku Coastal Trail is Japan’s longest and newest hiking trail. Stretching 435 miles along the Tohoku coast, the trail passes waterfalls and shrines, snakes through towns and villages, climbs rugged coastlines like the dramatic Kitayamazaki Cliffs (pictured), and cuts through woodlands. But it's the ocean itself that’s the biggest draw, with a changing scenery of rocky islets, coastline, floating rafts for farming oysters and scallops, and beaches like Jodogahama Beach. Its terrain ranges from relaxing to challenging, but it’s divided into 20 distinct sections so you don’t have to do it all. Because it’s so new, this really is one of Japan’s best-kept secrets. 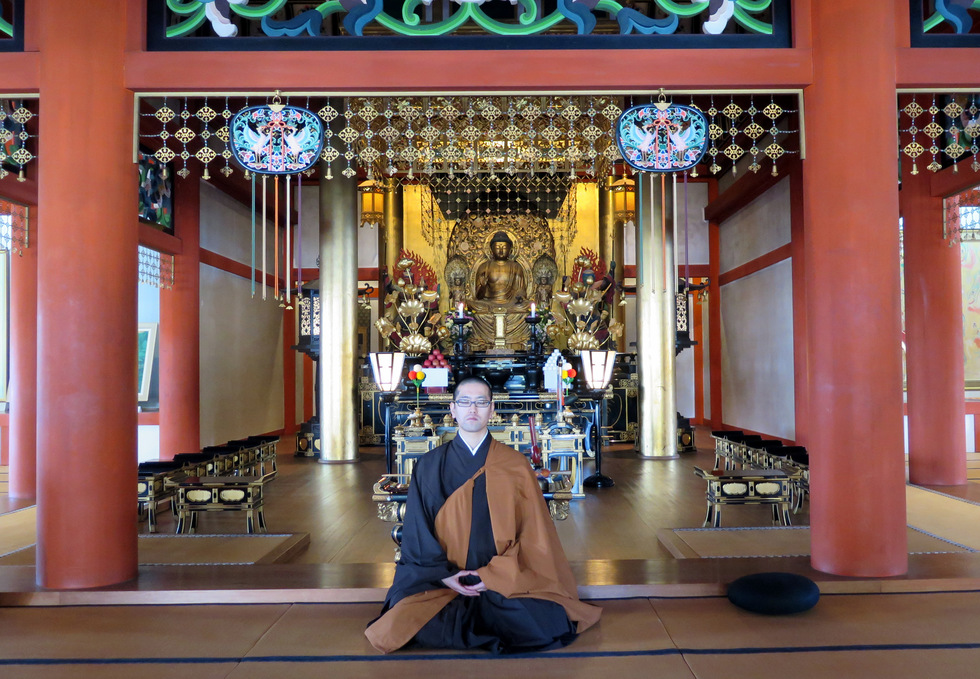 In 12th-century Japan, Hiraizumi was famous for vast temples and peaceful gardens representing the Buddhist Pure Land, an earthly paradise where the souls of friends and enemies alike could find solace and peace. Although the utopia lasted less than a century before being attacked by an opposing warlord and sinking into obscurity, Hiraizumi is so significant in Japanese history that it was declared UNESCO World Heritage Site in 2011, which came as heartwarming news after the tsunami. Although most treasures are long gone, Chuson-ji is famous for its dazzling Golden Hall, completed in 1124 and covered almost entirely in gold leaf. Nearby Motsu-ji’s reigning glory is its Pure Land Garden, one of Japan’s most outstanding examples of a garden from the Heian Period (794–1192). To experience the town’s spiritual side, sign up for a 60-minute zazen meditation, offered at the main halls of both Chuson-ji and Motsu-ji temples—although they often fill up a week ahead. 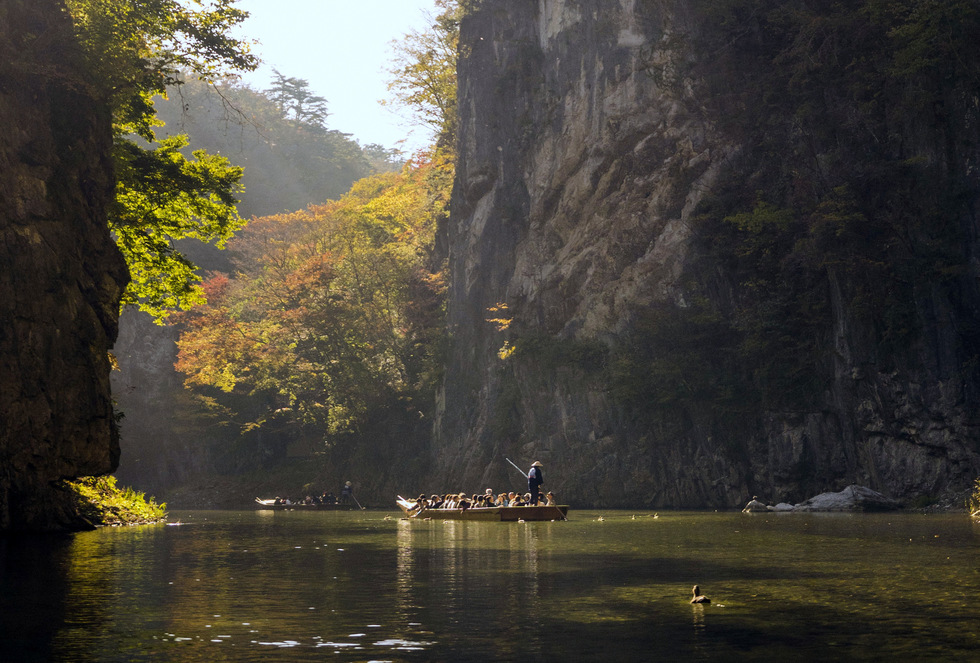 Courtesy of Iwate Prefecture
Board a boat for Geibi Gorge

For a relaxing 90-minute float trip through Geibi Gorge (also called Geibikei), board a traditional flat-bottom wooden boat, once used to transport horses and still made by local carpenters. Propelled by a lone boatman (or woman) with a long pole, the punts pass 100-meter- (328-foot-) high cliffs, ravines, waterfalls, bat caves and rock formations. Boats operate all year, providing changing seasonal panoramas of cherry blossoms and rock-climbing wisteria in spring, morning mists in early summer, blazing colors in autumn, and snowy drifts in winter. Boatmen serenade passengers with the Geibi Oiwake folk song, its melody haunting as it reverberates across the gorge. It's a five-minute walk from Geibiki Station in Ichinosekin. 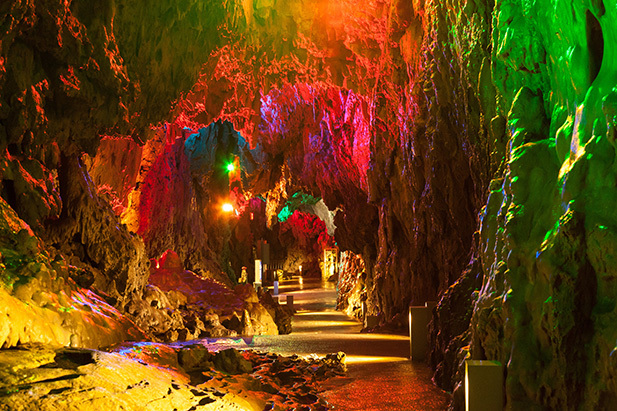 Ryusendo Cave is considered one of the three great limestone caves of Japan. It’s easy to explore via a pathway extending almost a half mile into the bowels of the earth, made more dramatic by colored lights highlighting stalactites, stalagmites, soaring chambers, and underground lakes that are among the clearest in the world. Five varieties of bats live here and can be spotted hanging from the ceilings, sometimes just inches above your head (don't worry—their excellent echolocation keeps them from touching humans). Water from the cave is used in the taps in nearby Iwaizumi and is sold in bottles. Also of note is that the cave’s constant cool temperature makes it a natural for storing bottles of wine made from local wild grapes. 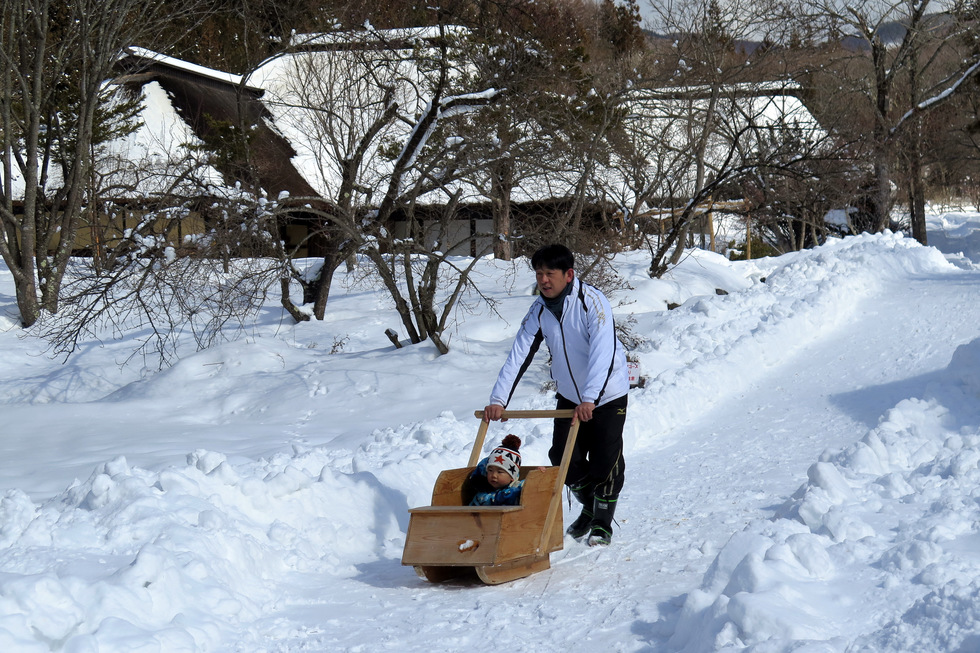 Although Hiraizumi’s temples may be World Heritage Sites well known for their cultural and historical significance, they are only shadows of their 12th-century glory years. Fill in the gap and learn how people used to live at Esashi-Fujiwara Heritage Park, with more than 100 reconstructed buildings of the Heian Period, including Hiraizumi’s Golden Hall, temples, administrative offices, and residences of two feudal lords. Tono Furusato Village (pictured) recreates a traditional mountain village of the Edo Period (1603–1867) with both authentic and reconstructed buildings, including thatched, L-shaped farmhouses that accommodated people at one end and their horses in the other. Both theme parks are frequently used as filming locations for period TV dramas and movies. 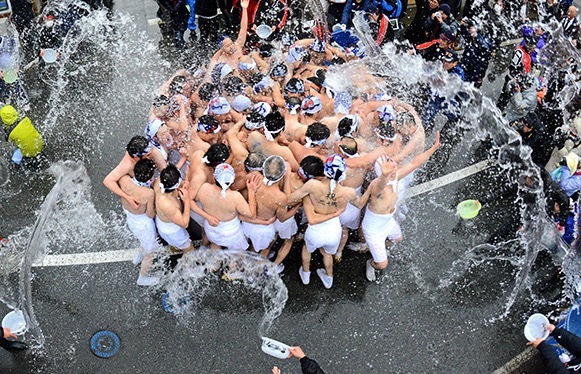 Iwate’s annual festivals include parades, folk dancing, Noh performances, and summer fireworks. The Sansa Odori Matsuri, held in August in Morioka, is certified by the Guinness Book of Records as the world’s largest taiko drumming festival, with more than 10,000 drummers marching through the streets. In Morioka during the same month is the arresting Boat-Burning Festival, in which makeshift vessels in the shapes of dragons are set ablaze and sent downriver to honor ancestors. One of the more unusual—some might say crazy—celebrations is the Daito-Ohara Water Throwing Festival (pictured) in Ichinoseki. With roots dating back to a massive fire that broke out centuries ago, it's thrown during the cold month of February, when men dressed only in loincloths run through the streets while spectators douse them with ice-cold water, a measure to ward off fire, sickness, and other misfortunes. 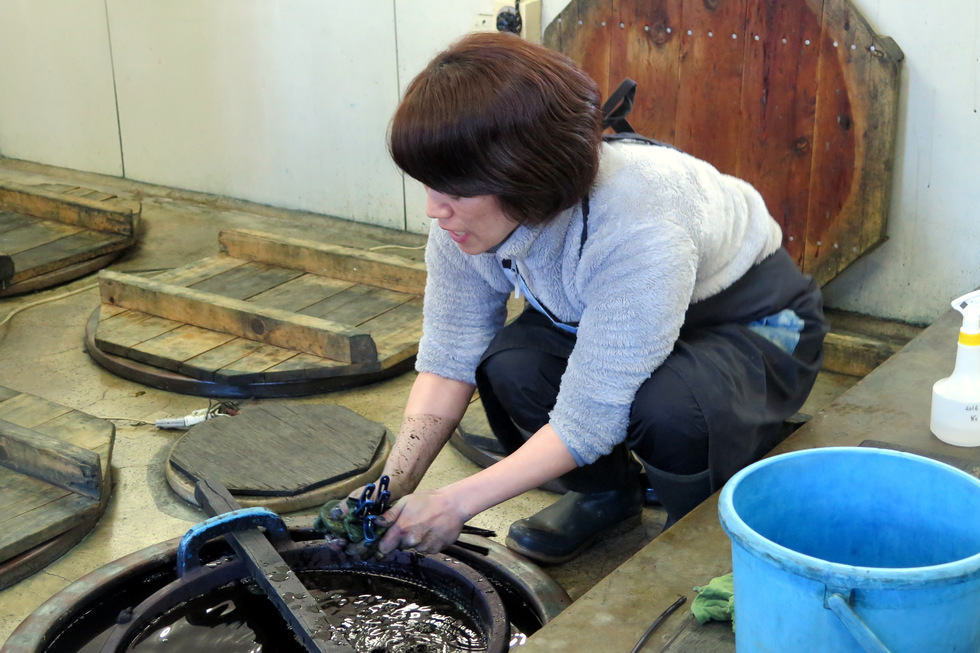 The capital of Iwate and famous for its own version of Mt. Fuji (the cone-shaped Mt. Iwate), Morioka is the prefecture’s best bet for hands-on experiences with local crafts. At Morioka Handi-Works Square, 15 workshops and craft galleries showcase artisans at work and schedule 30- to 60-minute classes for visitors wishing to make simple bamboo items, confectionary, sembei rice crackers, indigo-dyed handkerchiefs or other local goods. There’s also a thatched, L-shaped Edo-era home/stable from the horse-breeding area of Nambu and for souvenirs you can only find here, there's a shop selling ironware, noodles, sake, and textiles that were all made in Iwate Prefecture. 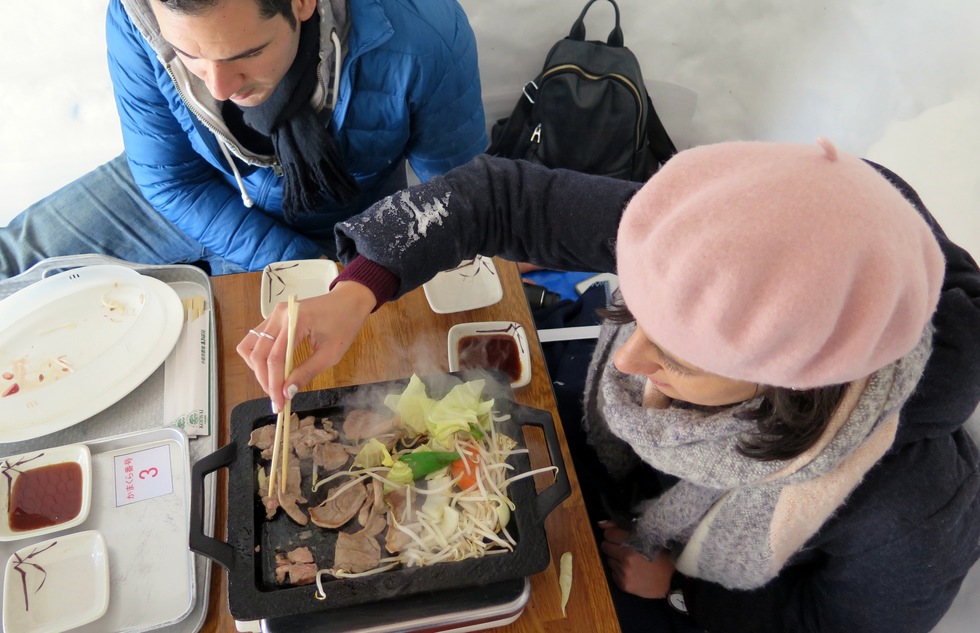 Heavy snowfall once contributed to Iwate’s centuries-long isolation, but today the winter is a major reason to visit. The cold months are prime time in Iwate, attracting skiers, snowboarders, and travelers who appreciate white scenery, bracing hot-spring baths, and hearty cold-weather meals. Of Iwate’s more than 15 resorts offering deep, dry-powdered snow from December to May, Appi Heights, near Hachimantai and located at the same latitude as Aspen in Colorado, is one of the most famous, with 21 courses and 28 miles of runs. The Iwate Snow Festival takes place in February around Morioka, with sledding (including a bicycle-shaped sled), snowshoeing, snow sculptures, a dip in an outdoor hot-spring bath, and evening fireworks. To refuel and warm up, crawl into an igloo and feast on lamb or beef with vegetables you cook on your own tabletop grill (pictured). 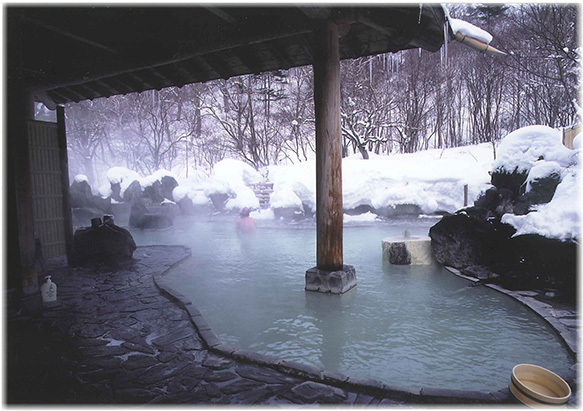 Hot-spring spas (onsen) can be found throughout Iwate Prefecture, most with open-air baths (rotenburo) to enjoy falling snow, scenic views, or simply the crisp air. There are even onsen just for dogs. Some hot-spring accommodations are historic, with more than 200 years of history, while others are large-scale resort hotels with all the latest amenities. Most include elaborate kaiseki feasts as part of the experience, with a variety of dishes that include local specialties like Iwate wagyu beef and fresh seafood ranging from oysters to scallops and sea urchins. One of Tohoku’s most prominent onsen villages is Hanamaki, in southwest Iwate. Easily reached by Shinkansen (bullet train), it has about 30 hotels and traditional inns scattered along a gorge of the Ou Mountains. Also famous is Hachimantai in northwest Iwate, with many isolated rustic guesthouses, hiking trails, and ski resorts. (The Matsukawa Onsen in Hachimantai is pictured.) 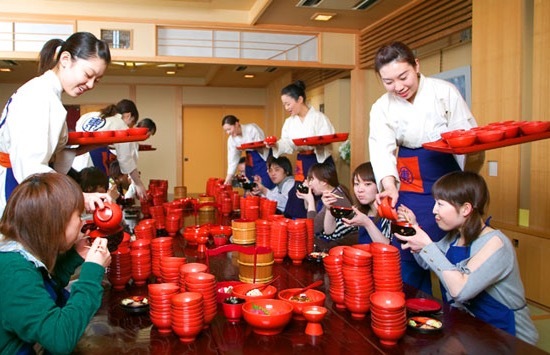 At a wanko soba restaurant, you’re expected to consume as many bowls of soba (noodles) as you can. It’s not speed eating, exactly, but it is a good-natured competition to see who can eat the most. After donning aprons, customers are served a lacquered wooden bowl containing just a small portion of soba, along with side-dish condiments like green onion, ground chicken, grated yam, and sesame seeds. Waitresses stand ready to quickly deliver bowl after bowl of noodles, with stacked bowls in front of each customer tallying the number consumed. Because portions are small, 30 to 60 bowls is considered average. You’ll find wanko soba restaurants in both Morioka and Hanamaki, but note that the record at Morioka’s Azumaya soba shop is 570 bowls of soba—by a female diner. In fact, the top two winners are women, with the top male winner achieving a paltry 500.