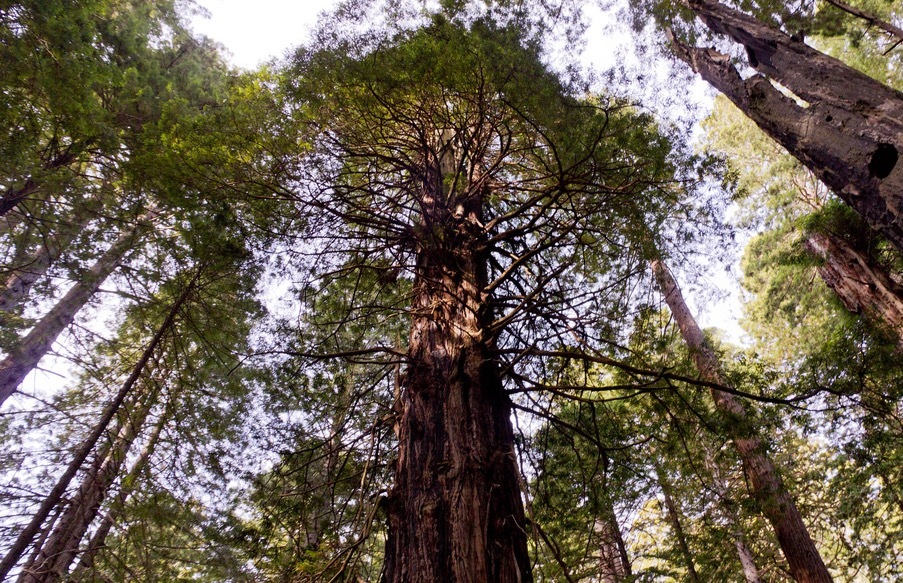 Best of The Redwoods: 10 Tip-Top Things to See Around California's Big Trees

No place on Earth will make you crane your neck, feel as small, or even as young as Northern California's Redwood National Park does. With a seemingly endless cluster of 500–700 year old trees that grow up to 267 feet/ 81 m tall (the tallest in the world) and over 20 feet/ 6m wide (second only to the neighboring sequoias), the word towering is a poor description for what it actually feels like in the midst of the world’s biggest forest. Whether hiking, driving through, taking in the nearby coast, or camping among these giants, there are a lot of nuances to take the time to appreciate. 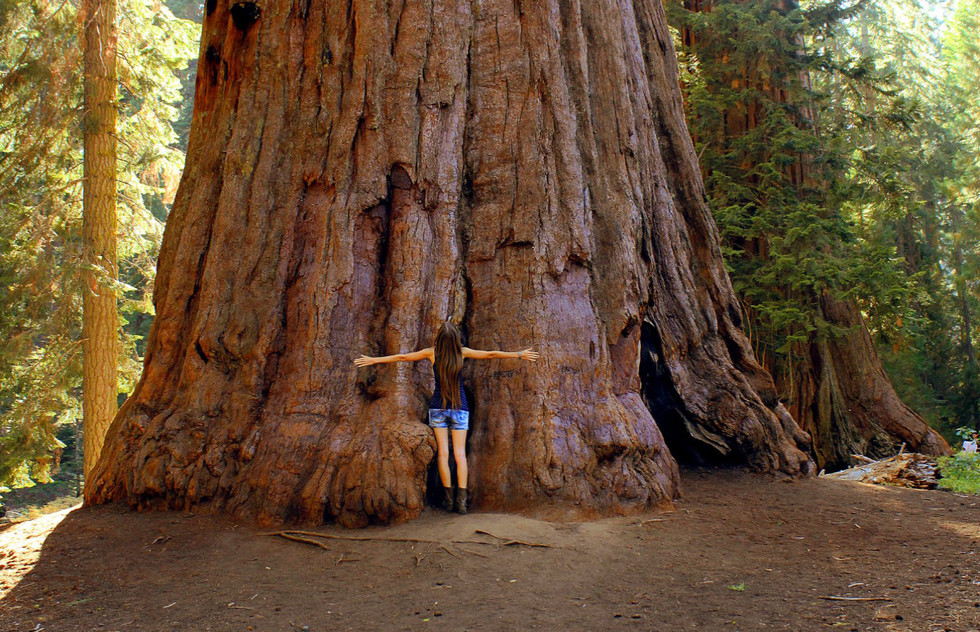 Since its founding over 100 years ago, The National Park Service has done a remarkable job in protecting and preserving our nation’s most distinct natural wonders. The redwoods are the rare exception, however, where state parks arguably lay better claim to what’s being protected. And of the three surrounding state parks that jointly manage the area with the federal park, for an excellent introduction to the forests, head to Jedediah Smith State Park, an hour’s drive north of the National Park along U.S. Route 199. 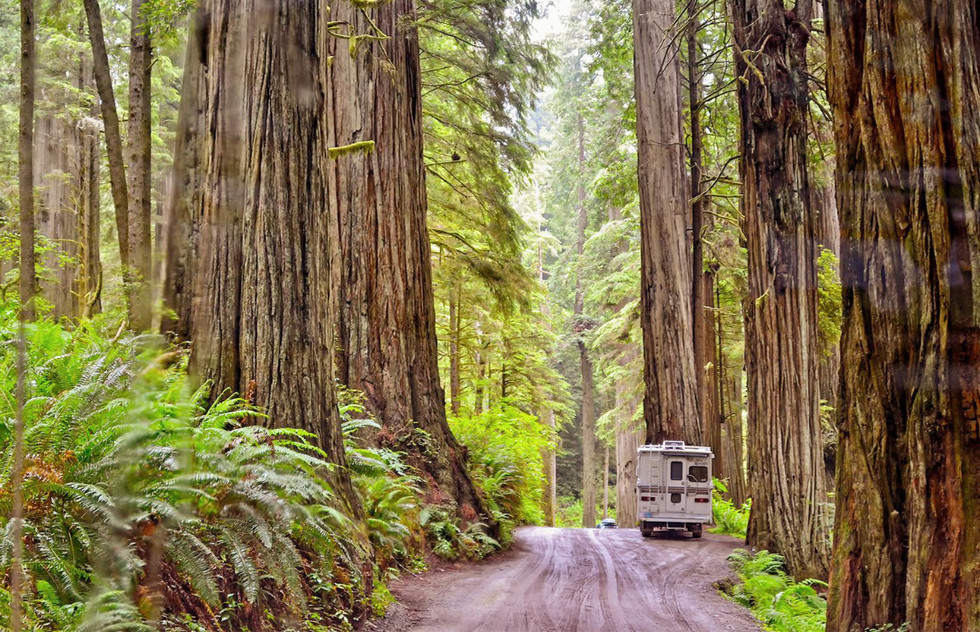 If you want to get in the thick of the woods, Jedediah is the best place to do it. Truth be told, this 5.6-mile (9-km), narrow stretch dirt road is one of the most impressive drives in the United States, if not the entire world. Even in a two-wheel-drive vehicle, you’ll weave in between the dense, old-growth redwoods and nearly touch them from your open car window. The sights and smells are so good, you’ll likely want to drive the road both ways. 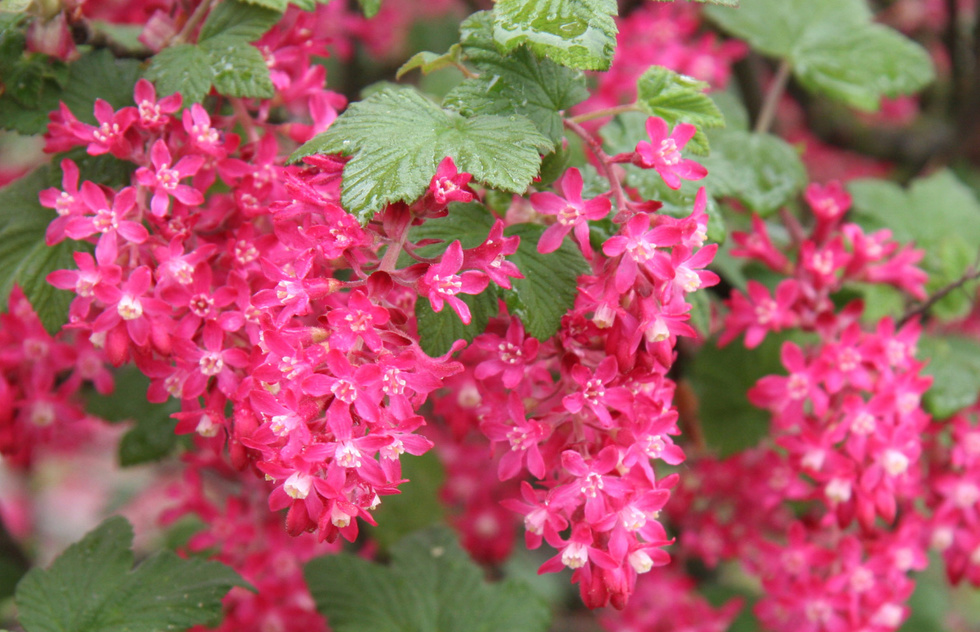 Along Howland Hill Road, you’ll also encounter the park's two highest-rated walks, Stout Grove and Boy Scout. Among the four combined redwood parks, these two trails are easily among the best and most pristine. At less than one mile round-trip, Stout Grove is short but packs a punch. Here you can walk inside the trees as well as alongside them. For a longer trek and even greater remoteness, head two miles south on Holland Hill Road for the five-mile Boy Scout trail. Like the park itself, both of these hikes are among the least developed and visited, while granting the closest access to the trees and fauna, such as carpets of red-flowering currant (pictured), which you can only find in this part of the world. 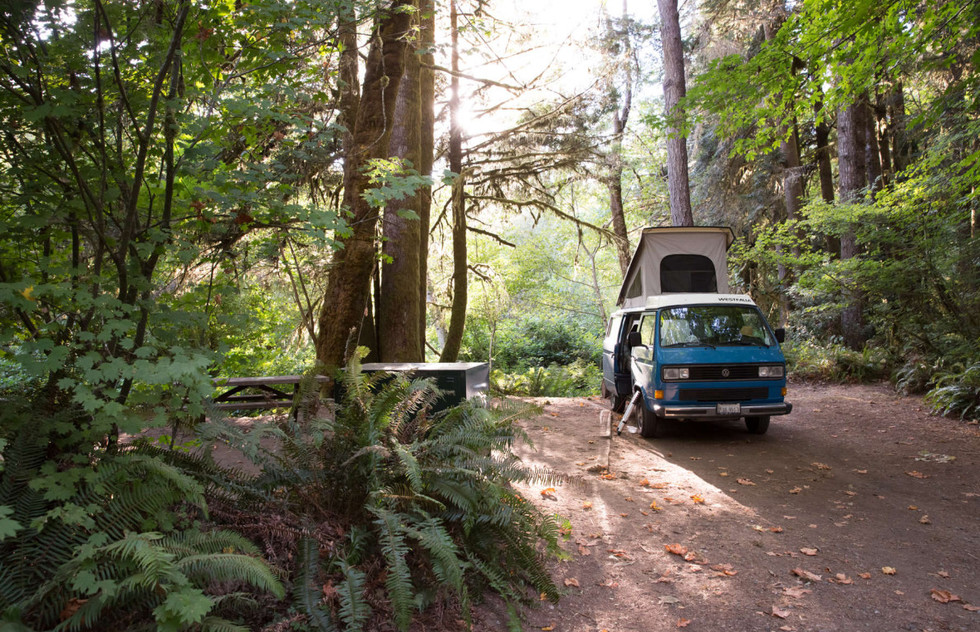 Visiting the Redwoods is so transfixing, you’ll probably want to linger among them for as long as possible. To extend your stay, consider cabin, tent, or RV camping at either Jedediah Smith Campground along U.S. Route 199 or Mill Creek Campground (pictured), located in Del Norte Coast Redwoods State Park, just off Redwood Highway (also called U.S. Route 101). Both come highly recommended, usually have surprisingly availability, and accept reservations (do it far in advance—Californians love their camping) at reservecalifornia.com. 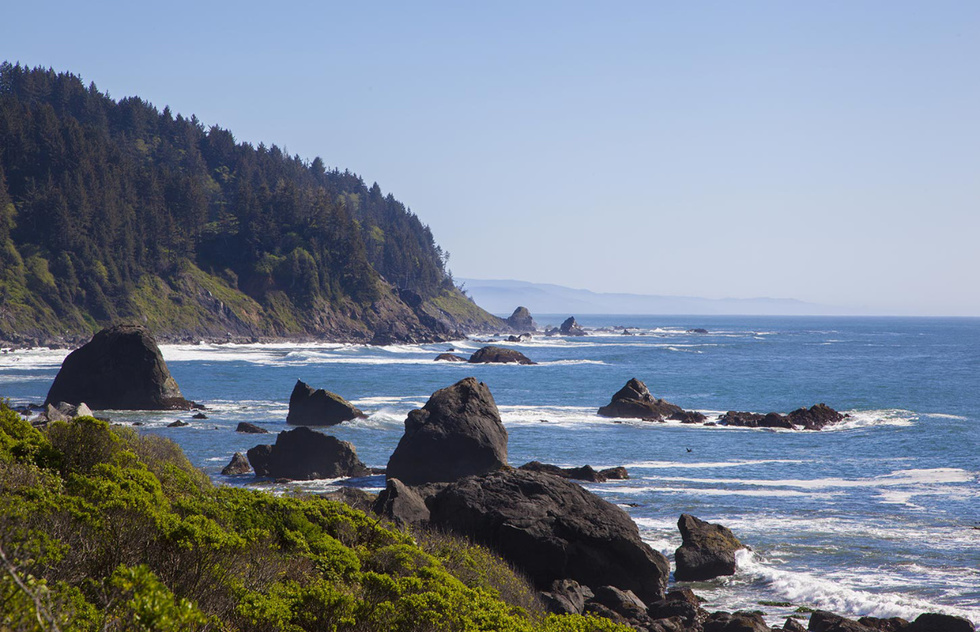 While driving south from Jedediah Smith and Del Norte Coast Redwoods State Park on scenic U.S. 101, you won’t believe how dense and sun-sliced this congregation of giant redwoods actually is. For even more scenery on a lesser-traveled road, and for and closer views of the Pacific Ocean, turn west just after Klamath onto Coastal Drive (pictured), right as you begin to descend into Prairie Creek State Park. The six mile dirt road (also accessible by car) is a tranquil way to pair the trees with the nearby sea. 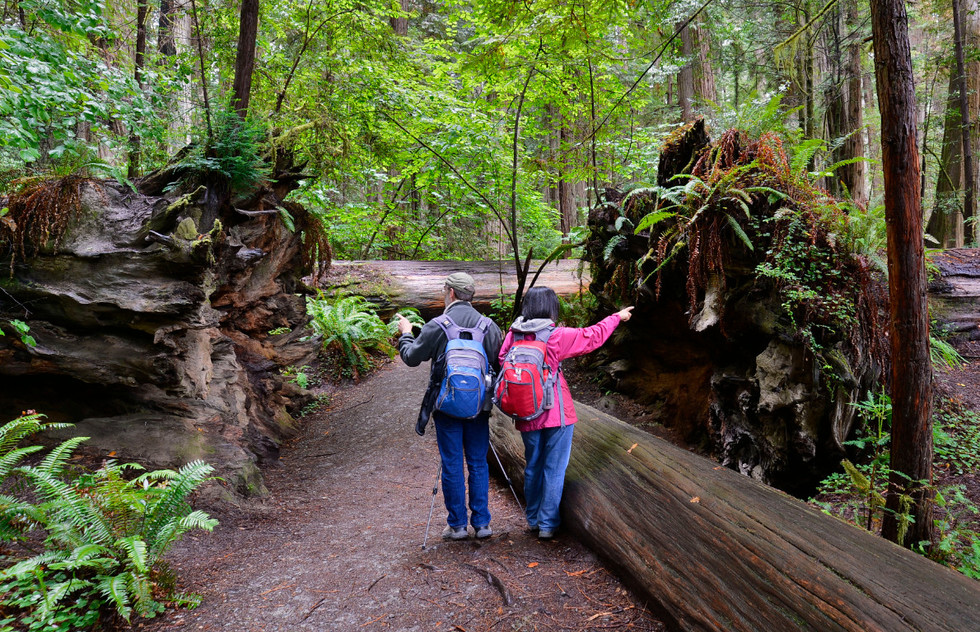 Of the four redwood parks, Prairie Creek is arguably home to the largest collection of well-rated long hikes. Top-rated Fern Canyon is an easy one-mile loop through 50-foot fern-covered walls with a creek and waterfall. Cathedral Tree Trail is another easy hike—three miles total. For longer distances, try either the moderate James Irvine Trail (10 miles) or difficult Miner’s Ridge Trail (12 miles) that finishes at the beach and connects with Fern Canyon. 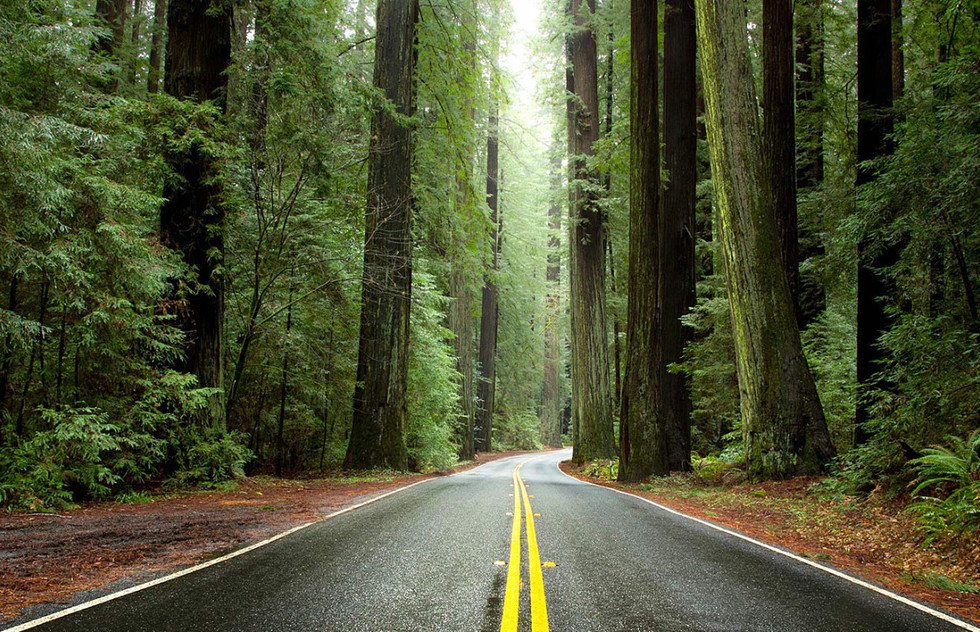 Alongside the aforementioned Howland Hill, U.S. 101, and Coastal Drive roads, Newton B. Drury Parkway is the last of our four recommended drives of the redwoods. Located near Orick in Prairie Creek State Park, this 10-mile, two-lane road might be the most canopied stretch in the entire area. Shaded, curtained with ferns, and surrounded by trees, it’s a smooth and quiet ride through the mystic forest en route to the more crowded national park. 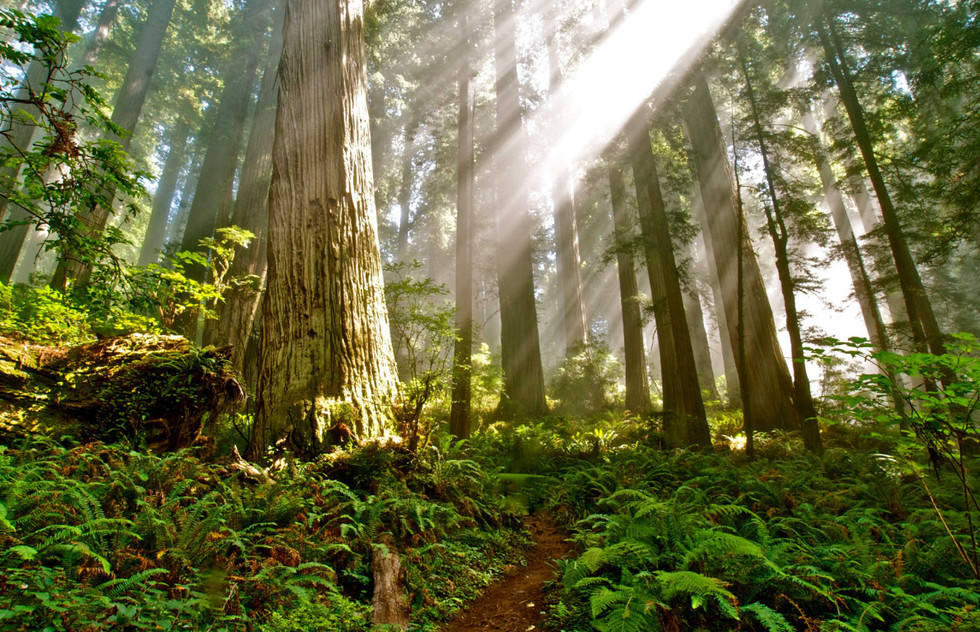 Back in Redwoods National Park, it’s time to see some of the oldest trees in the area that are accessible to visitors—they're over 500 years old, in fact—by walking the Lady Bird Johnson Grove (1 mile), and to weave above and below fallen trees on the Tall Trees Grove trail (3 miles, pictured) as you amble down to the Redwood River. Whether in misty fog or slanting light, it’s gorgeous. For even more dramatic lighting, consider visiting each in either the orange hues of the morning or evening (the park is open sunrise to sunset). 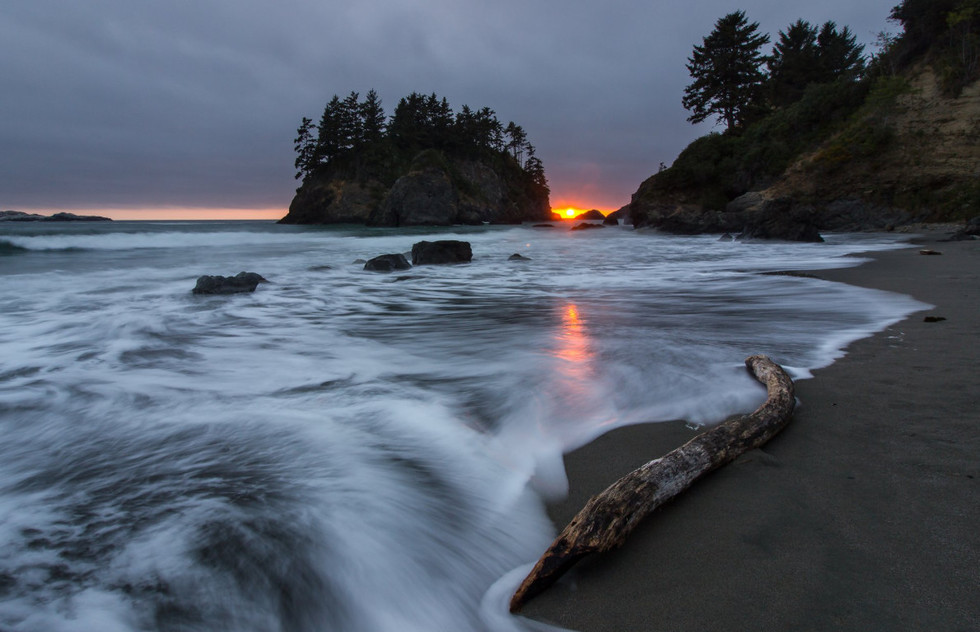 While the colossal redwoods are undoubtedly the stars of the show, there are two remarkable beaches worth wading in and taking in while visiting the area. To the north at Pebble Beach in Crescent City (not the same Pebble Beach further south near Carmel-By-the-Sea), you’ll enjoy the crowd-free sand and Oregon-like vistas. To the south from Redwoods National Park (about 30 minutes by car), you’ll find a picturesque cove with the trees on your back at Trinidad State Beach (pictured). Given the water's frigid temperatures, you probably won’t want to swim for long, but both are equally impressive sights to behold. 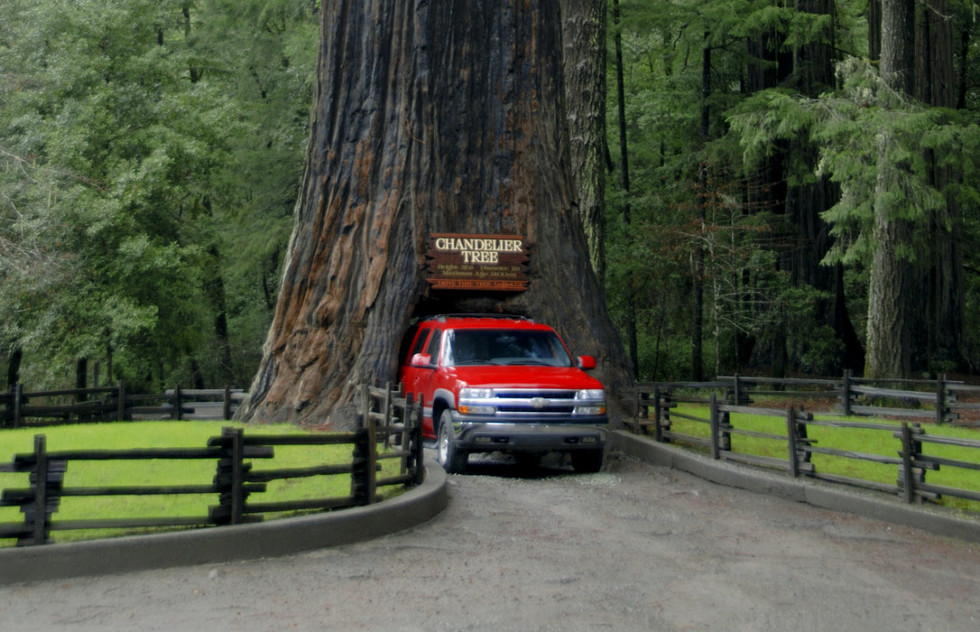 Chandelier Tree
Get touristy by driving through a tree

According to the National Park Service, “Where can I drive through a tree?” is one of visitors' most frequently asked questions. There is no such thing anymore at any of the four parks that care for the giant trees—they're now protected—but tourists can choose to do so (for a fee) at one of three privately owned trees, namely the Tour Thru Tree (at 430 CA-169 in Klamath), the Shrine Tree (at 13708 Avenue of the Giants in Myers Flat), or the Chandelier Drive-Thru Tree (at 67402 Drive Thru Tree Rd. in Leggett). Although still impressively living, all three trees were severely damaged to make the passages possible. Tourist attractions like these are fun novelties, but they're one reason why we needed these four precious parks to begin with.