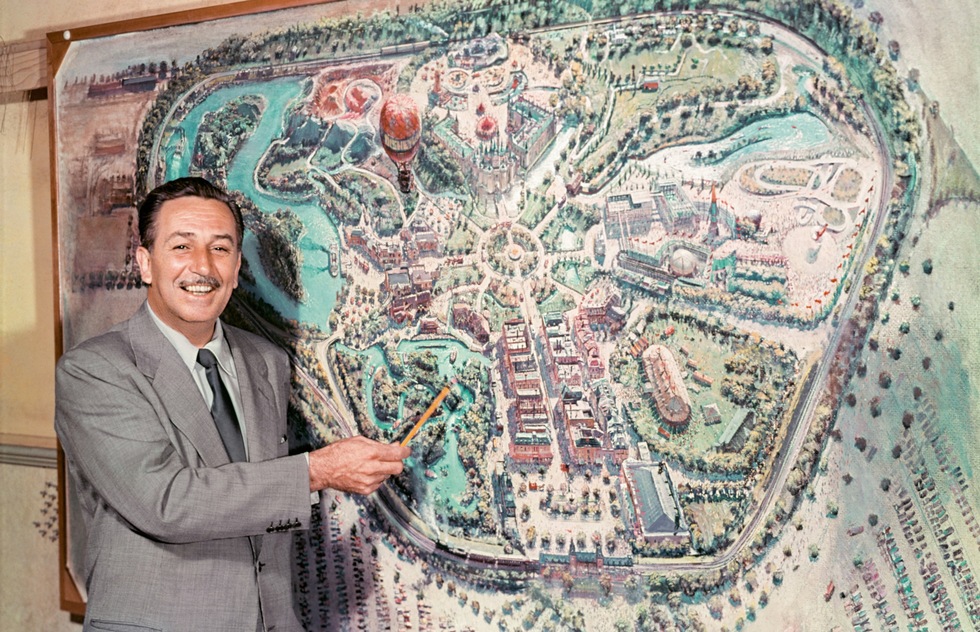 When Walt Disney pitched his idea for an amusement park on his ABC TV show in 1954 (pictured), he could never have predicted that his Disneyland would one day be one of the most photographed places on Earth—in 2018, Instagram crowned it as its most frequent subject. But a recent book proves there are still some photos of the park that have yet to be discovered. Taschen, the celebrated art book publisher, has put out Walt Disney's Disneyland, a rarity-stuffed book about the development of the park in Anaheim, California. This volume is a little different from most of the blindly adoring tomes that have been published in the past. The author of the text, Chris Nichols, is an architectural historian, so not only was he granted access to archive images that no one else has published before, but he also comes at the topic with the eye of a scholar and a cultural detective. From the origin of the Mickey-shaped balloon to why the park had to stop offering animal-driven rides in Frontierland, the tale the book tells treats this paragon of vacation destinations with the context and intellect it deserves. 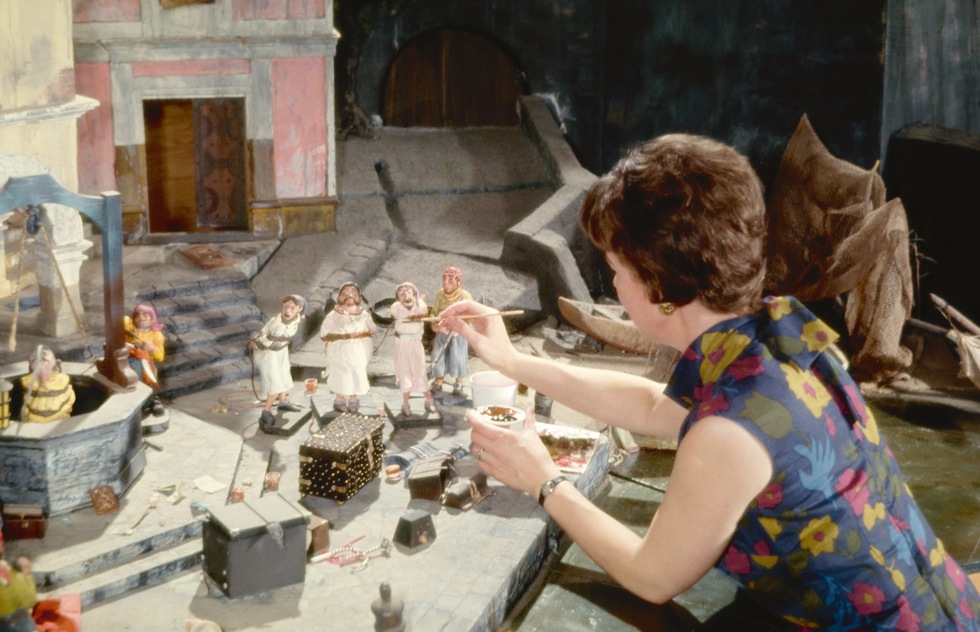 One of the original members of the WED Model Shop, part of a Disney-created contractor that did most of the park's designs in the early decades, was Harriet Burns. Here, she helps construct the scale models for the Pirates of the Caribbean attraction so that Walt Disney could study every detail from the point of view of future riders. (The book also includes a 1963 floor plan of the pirates-themed walk-through wax museum that eventually morphed into the boat flume we now know.) Though Walt oversaw the development of the ride, it did not open until 1967, months after his death. Burns, the first woman to be hired as a Disney Imagineer, is commemorated by a fake shop window in the park's Main Street, U.S.A.: "The Artisans Loft: Handmade Miniatures by Harriet Burns." 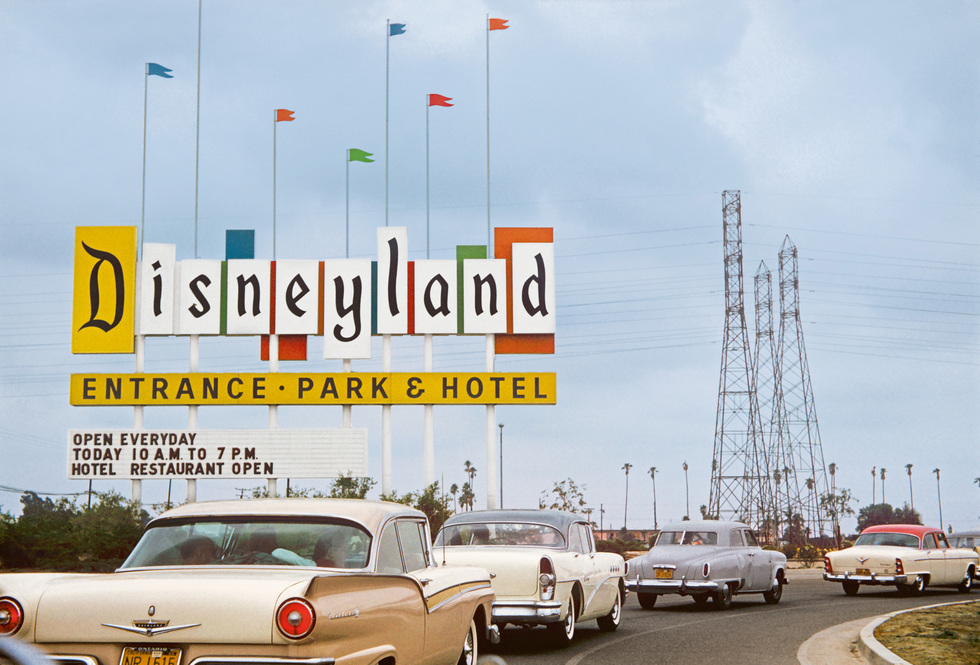 The original Disneyland sign on Harbor Boulevard welcomed guests from 1958 to 1989. Its bold colors, shapes, and kinetic exuberance make it an icon of midcentury design. All-day parking cost 25¢. To enter the park, adults paid $1 and then 10¢–40¢ per ride. The parking lot and its unsightly high-tension power lines were removed in 1998. Disney California Adventure and Downtown Disney were built in their place. 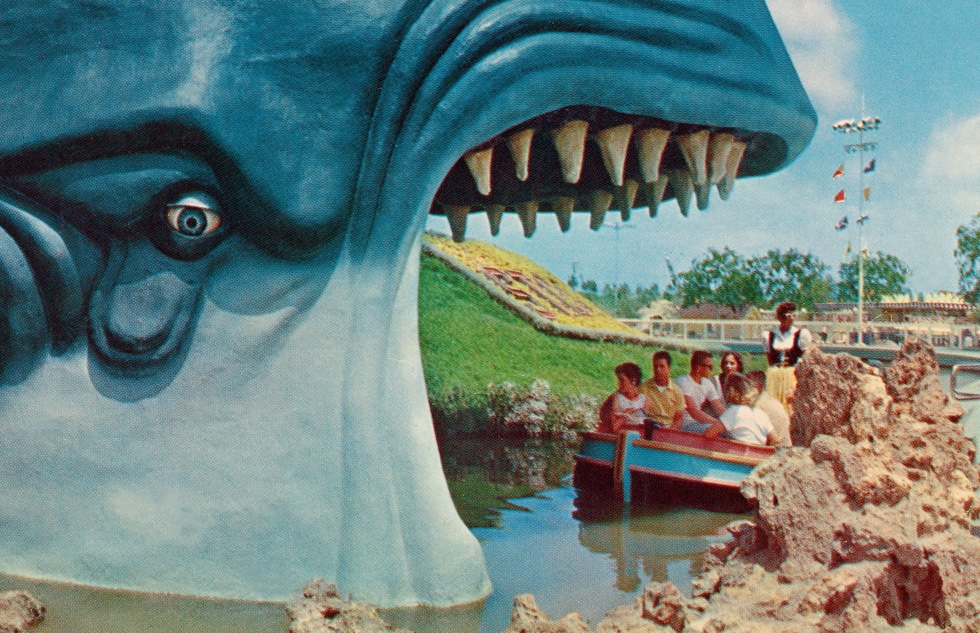 Monstro the Whale, from Pinocchio, marks the entrance tunnel for the Storybook Land Canal Boats in Fantasyland. The germ of the idea for Disneyland came following 1947, when Walt Disney began collecting miniatures for his model train layouts and he eventually decided he wanted to build a place to show them off. Storybook Land, a float past 1:12 dioramas of fairy tale moments and miniature European villages, was a direct descendant of that simple concept that expanded into Disneyland. The ride began operating on opening day, July 17, 1955, and it's still there today, although most of the fairy tale references have been replaced by ones from Disney's animated movies. 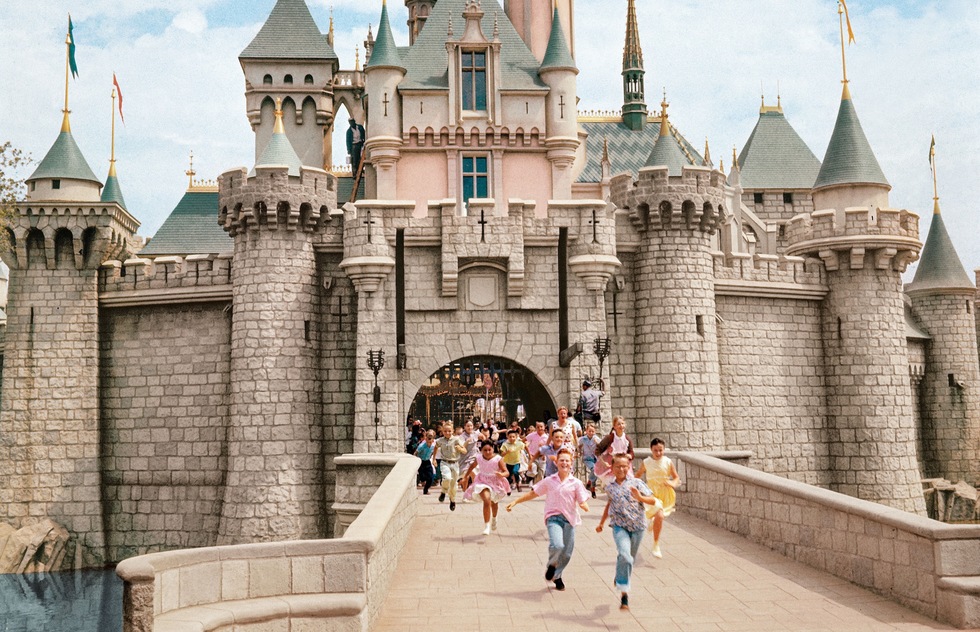 The drawbridge to Sleeping Beauty Castle was lowered for the first time by the decree of an armored knight on horseback on Disneyland's opening day, July 17, 1955. The bridge has been raised and re-lowered only one other time since, when the renovated Fantasyland opened on May 25, 1983. In the park's planning stages, Walt considered Robin Hood's castle and Cinderella's palace for this spot. In 1971, five years after Walt's death, Cinderella Castle was indeed built, but in Florida. 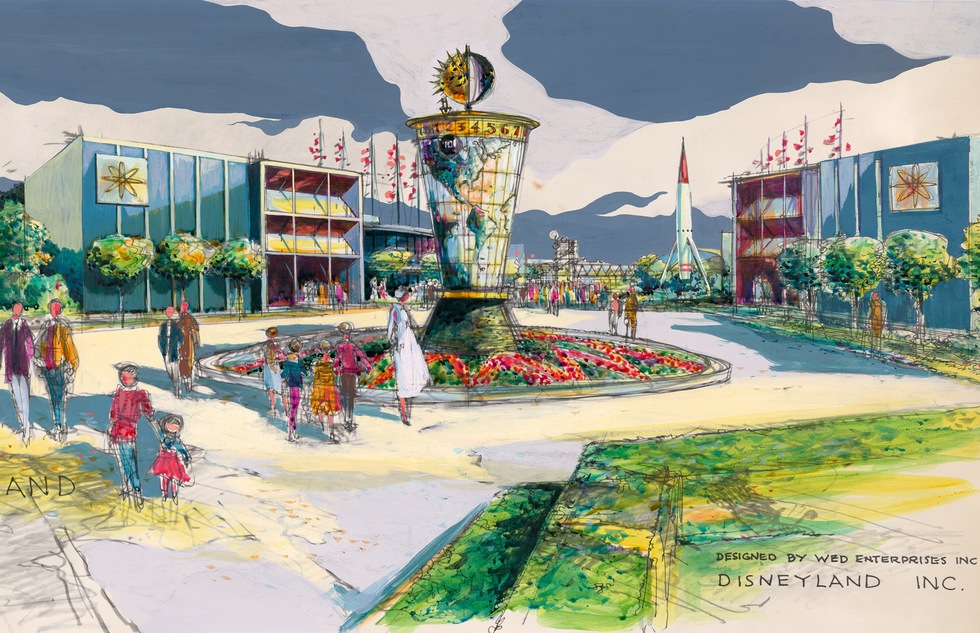 In the 1950s, Tomorrowland's entrance was marked by the Clock of the World, which told time in 24 time zones. Showcased within the area were innovative technologies created by some of the nation's leading businesses, a World's Fair-inspired, corporate-funded concept that was extended for the opening years of Future World at Epcot in Florida. Early attractions at Tomorrowland included a simulated rocket ride to the moon and the Astro-Jets rocket-themed carousel—space travel was a huge fantasy for kids, and this was two years before the Soviet Union had even launched the world's first satellite, Sputnik. This Tomorrowland was torn down and rebuilt in 1967. Walt Disney's Disneyland includes a great image of Muhammad Ali signing autographs for fans just after the relaunch. 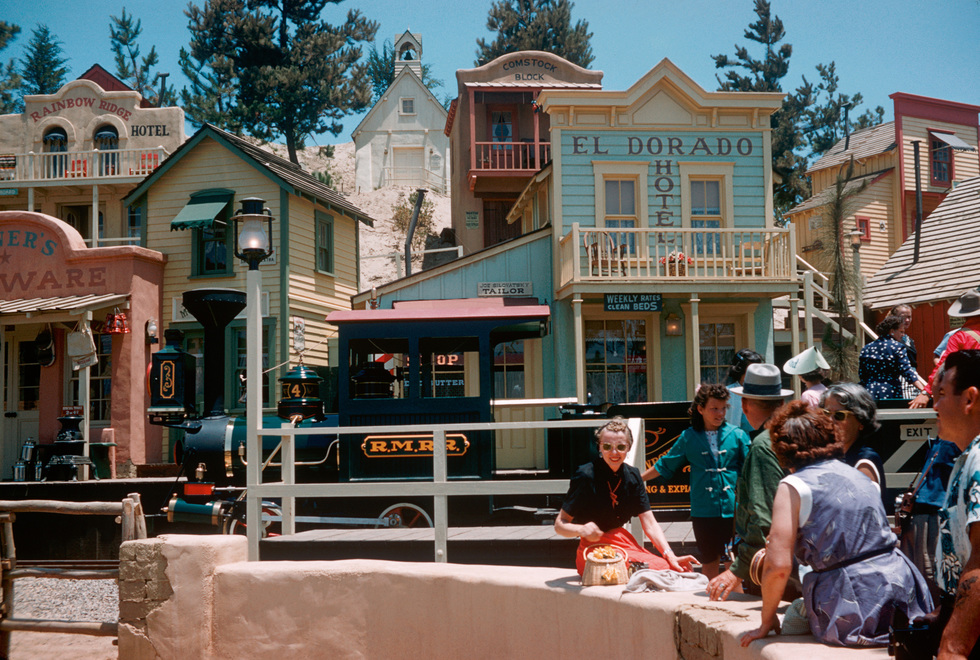 The Mine Train Through Nature's Wonderland was the land-based analog to the Jungle Cruise, but instead of a boat ride through rainforests, it was a slow-moving electric train tour through the wonders of the American West. The buildings of the Rainbow Ridge mining town, the train's loading area, were designed by art director and set designer Bill Martin, who recalled they were a favorite of the Disneys: "I remember that Walt and Lilly would often walk along the pathways between those little buildings when they stayed at the park overnight." Although the attraction was removed in 1977, the little town was saved, and now these buildings can be seen in the queue and the final moments of the Big Thunder Mountain Railroad roller coaster. 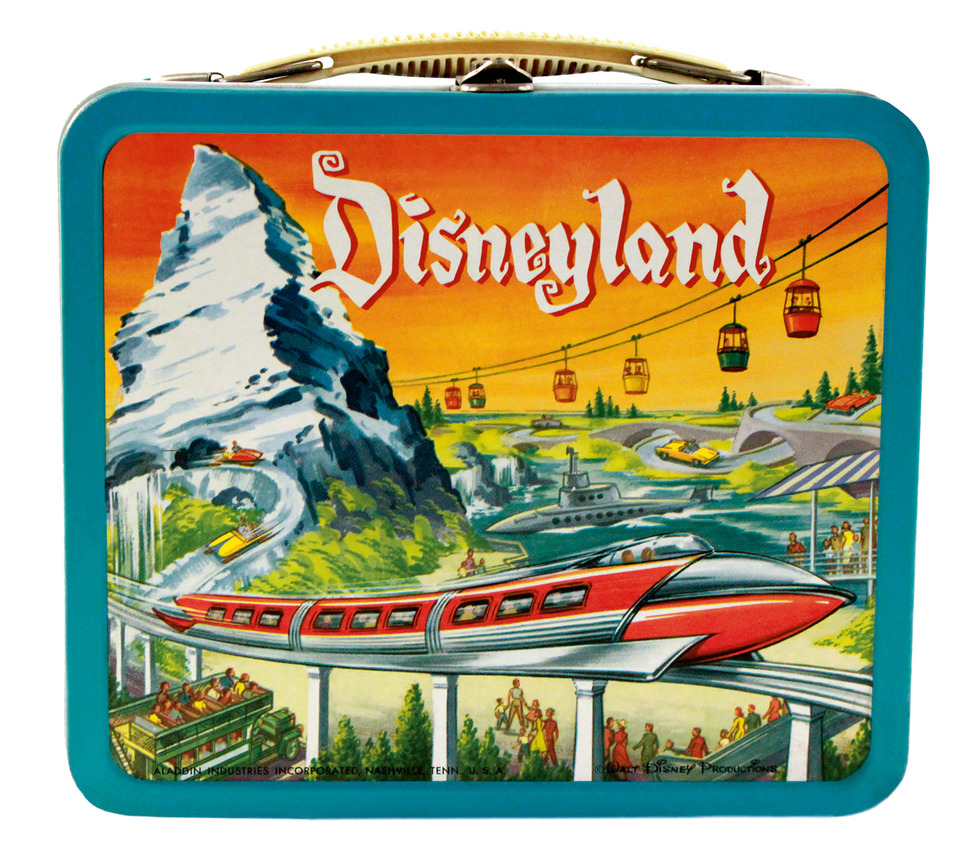 Sometimes out of financial necessity, Walt Disney was a pioneer of merchandising. Barely two years after the 1928 introduction of Mickey Mouse, his image was already being licensed by toy and souvenir manufacturers. Disneyland only accelerated the consumerism. This 1959 metal lunch box features two attractions that were introduced in Tomorrowland that year: the Disneyland-Alweg Monorail and the Submarine Voyage, both of which still exist in modernized forms. (Walt Disney's Disneyland includes a fascinating image of the submarine, the monorail, and the lost Skyway together in one image that was taken halfway below the surface of the submarine's lagoon.) This lunch box fetched $500 at a recent auction, but other Disneyland lunch boxes have been purchased for four figures. 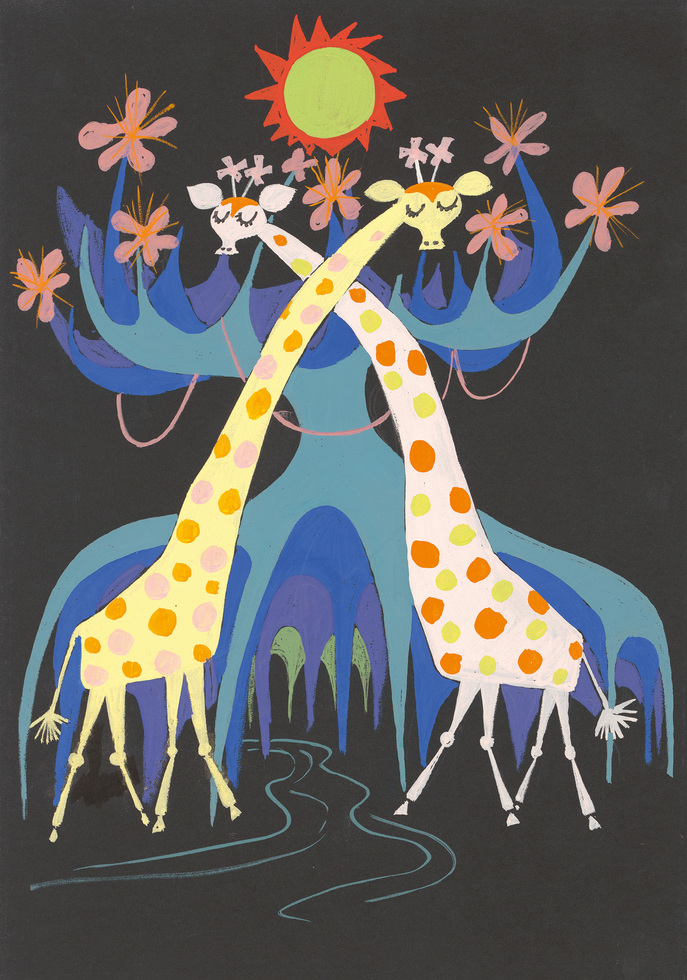 When Walt Disney agreed to make "it's a small world" for the 1964 New York World's Fair (sponsored by Pepsi and commissioned at the behest of its board member Joan Crawford), he remembered the playful drawings of Mexican children by Mary Blair for the 1945 animated film The Three Caballeros. Blair had been a color stylist at The Walt Disney Studios during the 1940s and early 1950s before moving on to become a graphic designer and children's book illustrator. Walt coaxed her back to create his children's attraction, and now her intense, clashing colors and modernist stylings have come to define the Disney Look for the period. The World's Fair's original "it's a small world" boat ride was packed up and moved to Disneyland. 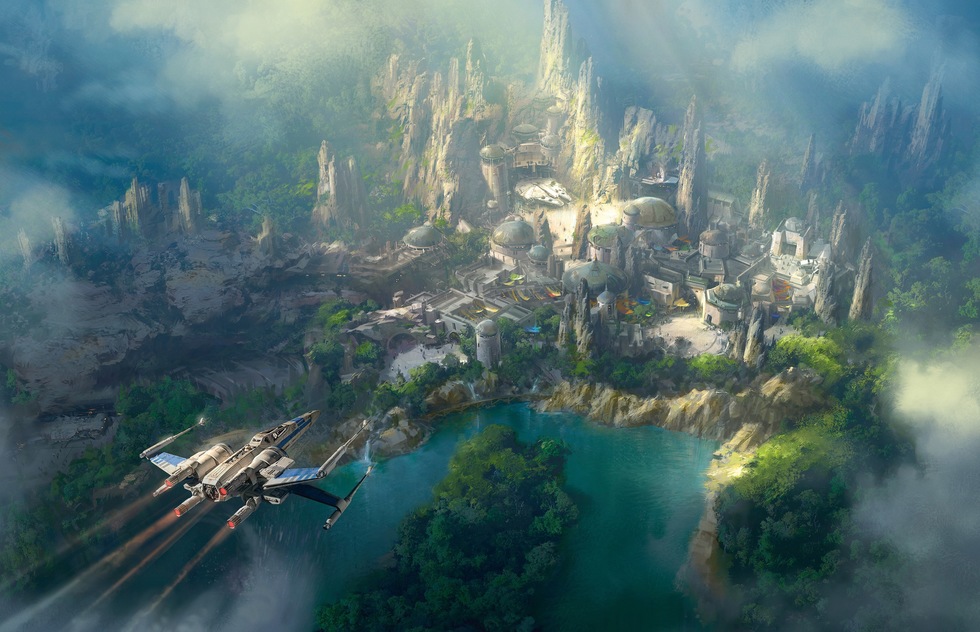 The most elaborate Disneyland addition of the modern age is Star Wars: Galaxy's Edge (open spring 2019), which takes up what was previously mostly backstage area. The price tag for the new areas at Disneyland and Orlando's Hollywood Studios is reported to be in excess of $1 billion. 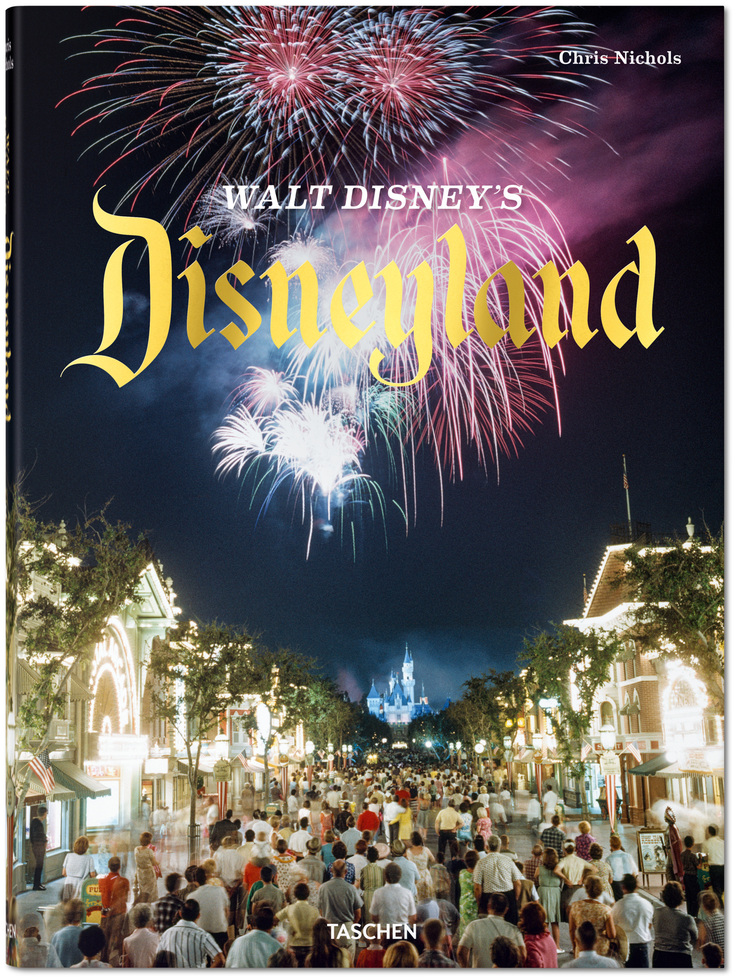 The 352-page Walt Disney's Disneyland by Chris Nichols, billed as "a visual history of the world’s megalopolis of magic," is from art book publisher Taschen. To tell the story of Disneyland's concept, development, design principles, and launch, it draws on the company's huge historical collections, private archives, rarities of photojournalism, renderings, and original documentation.