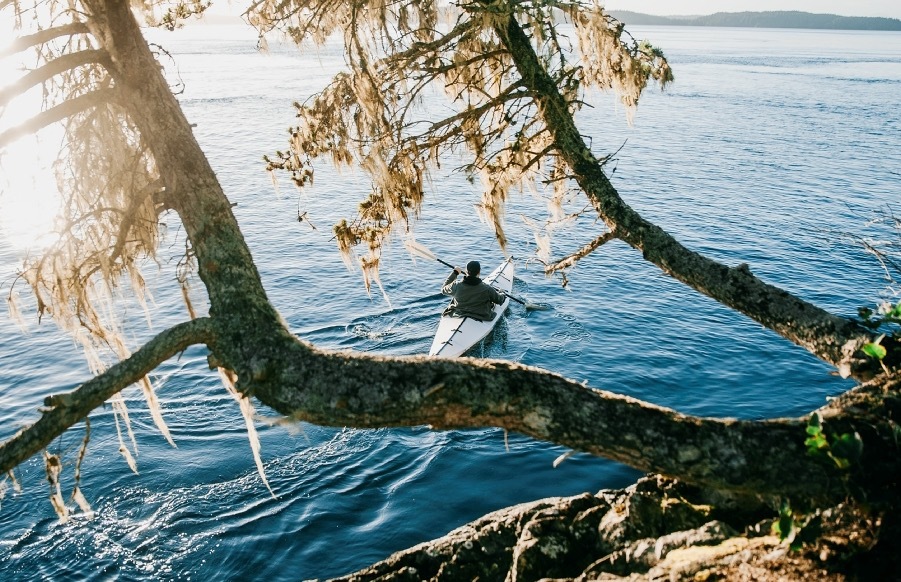 The west coast of Canada doesn’t come to a full stop—it’s more like an ellipsis . . . Innumerable islets, many of them just uninhabited rocks with some trees on top, dot the Pacific edge of British Columbia, as if the province were trailing off toward the end of a story that the ocean is keen to interrupt. The fog that often hangs over everything, especially late in summer (“Fogust” is the locals’ nickname for the month before September), only adds to the uncertainty over where, exactly, one element ends and another begins.

Those who live here evidently don’t worry much about those distinctions, spending what seems like as much time in watercraft of one kind or another (Zodiacs, ferries, kayaks) as on dry land. Following their lead in waterlogged places such as B.C.’s North Coast and Northern Vancouver Island, a visitor will encounter vast, untouched forests, cobalt-colored inlets frequented mostly by whales, the remains of a once-thriving fishing industry, the traditions of indigenous cultures, and, with luck and some patience, grizzly bears hunting for salmon. Welcome to Waterworld.

Pictured above: Kayaking near Telegraph Cove on Northern Vancouver Island 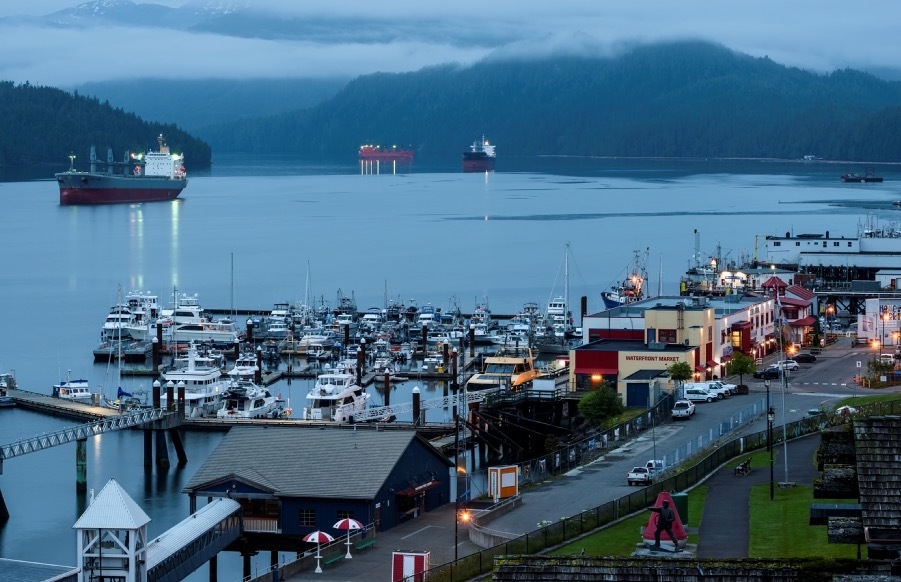 A common point of entry for cruise and cargo ships on British Columbia’s North Coast is Prince Rupert. The port’s unusually deep waters can accommodate enormous vessels carrying goods to and from Asia, and the nearness of Alaska and the islands of Haida Gwaii makes Prince Rupert a convenient gateway to wilderness adventures.

But despite the international traffic in the harbor, a small-town ethos prevails in the shops and restaurants clustered along Cow Bay (pictured), a name inspired by the momentous arrival of a cattle-bearing barge in the early 20th century. Have a coffee at Cowpuccino’s (where bovine art lines the walls) or a craft beer at Wheelhouse Brewing Company (try the surprisingly citrusy Scurvy Dog spruce ale, made with fresh sitka spruce tips), and it’s a safe bet that you’ll meet more North Coasters than out-of-towners. You can forget about completing the crossword puzzle in The Northern View newspaper—the clues are all about local goings-on. “The name of the Prince Rupert woman organizing the BC Thanksgiving Food Drive” was 1-down in a September 2018 issue. And you thought the Sunday New York Times puzzle was daunting. 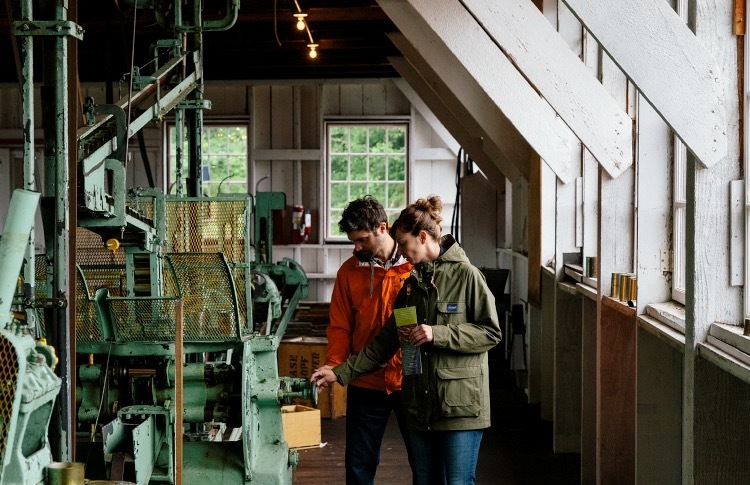 Salmon have never had it easy on the Pacific Coast. First, bears and fishing boats were out to get them. Now, climate change, pollution, and overfishing pose additional threats. A tale of salmon sorrows is told in detail at the North Pacific Cannery National Historic Site, a group of weathered buildings on wooden pilings in the Skeena River south of Prince Rupert. Once one of numerous outposts in the region for catching, butchering, and sealing fish in tins for export, this is one of the only B.C. canneries still standing. On guided tours (included with admission), you can see where workers of European, Asian, and First Nations backgrounds (Canadians prefer the latter term to Native American) lived and labored—mostly in segregated facilities—during summers for nearly a century starting in 1889. Despite what seem like quaintly rustic surroundings today, the main production floor was a noisy, smelly, slimy place, with fish guts flying and some on the line standing in buckets of warm water to counteract frigid working conditions. In other words, the salmon weren’t the only ones suffering. 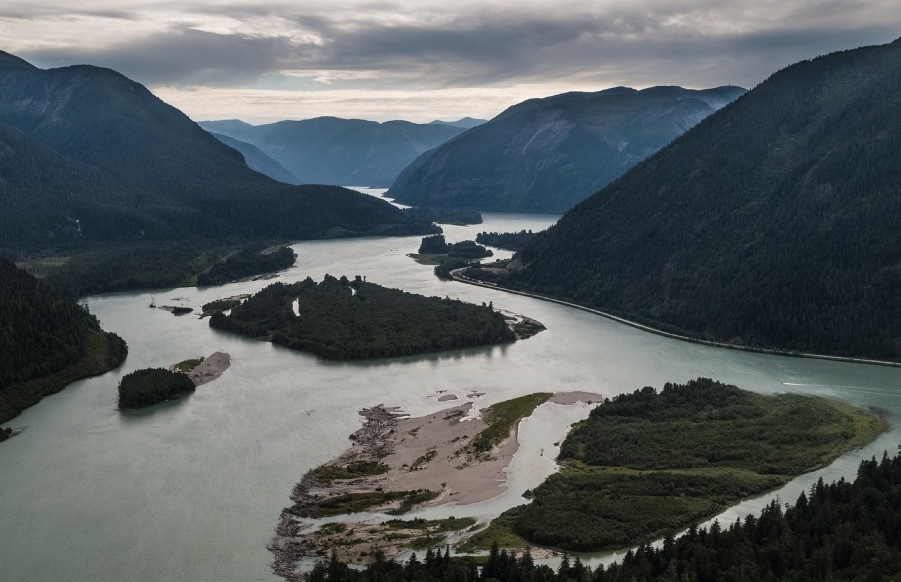 By the middle of the 20th century, the heyday of British Columbia’s canneries was over, in part because overfishing had led to dwindling salmon numbers. Many canneries—and the settlements that depended on them—either vanished completely or left behind few traces beyond rotting posts in the mud. Guides with Northern BC Jet Boat Tours can fill you in on what’s known about these ghost towns while you zip along the Skeena River, passing misty, heavily forested shores that at first glance look like they’ve escaped human intervention altogether. At now-uninhabited Port Essington, passengers disembark to walk through an abandoned cemetery where illegible headstones are being swallowed up by mossy undergrowth. It’s almost too obvious a metaphor for the fleeting nature of human lives. 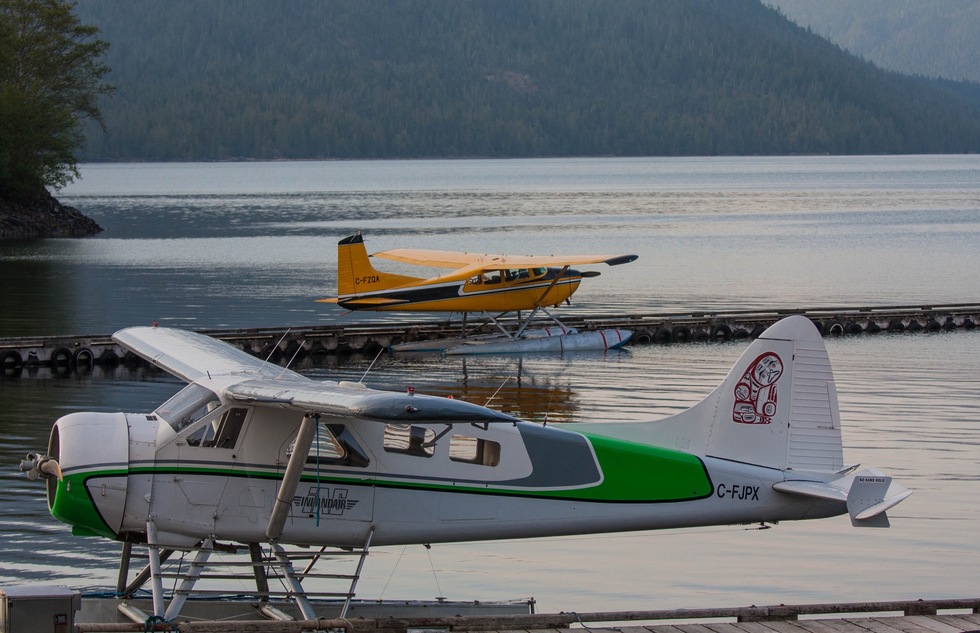 Maciej / Flickr
Prince Rupert by Seaplane: B.C. from Above

If you still need help putting the terrain in perspective, taking a ride on a seaplane—which lands and takes off on the water—should do the trick. Ocean Pacific Air operates tours out of Prince Rupert’s Seal Cove Seaplane Base. From the air, even gargantuan cargo ships in the harbor look puny compared to the surrounding ocean, distant mountains, and, over every inch of land, what looks like a vast shag carpet of trees. Some of the wilderness you’ll see belongs to Alaska’s panhandle, which is so close that you might get an alert from your cell phone carrier welcoming you to the United States. Keep an eye on the water, too, for humpback whales troubling the surface. 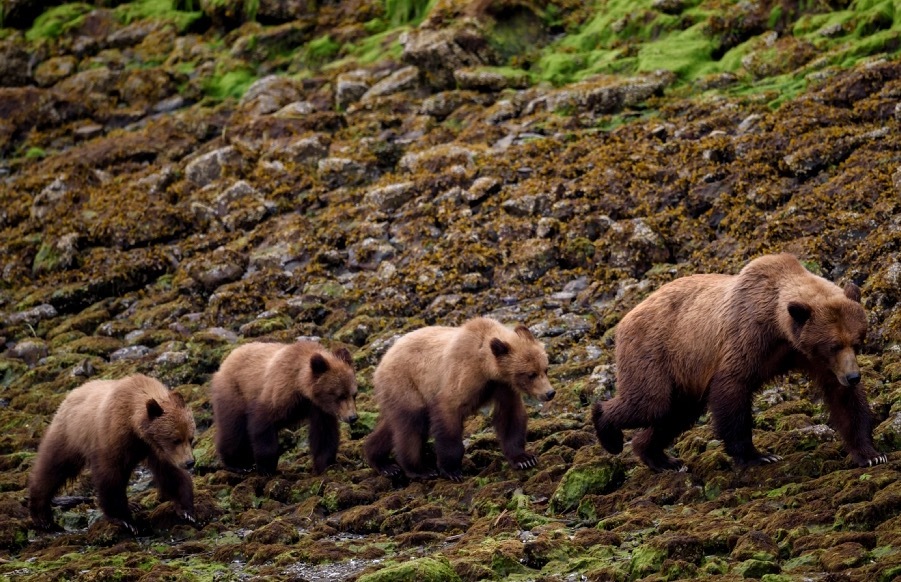 More than 50 grizzlies roam the nearly 45,000 hectares (more than 100,000 acres) of the Khutzeymateen Grizzly Bear Sanctuary, a provincial park in the Coast Mountains north of Prince Rupert. But whether visitors spot any bears depends on the season’s salmon population. Wildlife viewing (tours are available May to September) can only be conducted by boat and bears need a reason to head to the water to find fish. It can be frustrating to creep through inlets while your vessel’s pilot-guide peers through binoculars, scanning faraway mud for poo and paw prints. At those moments, British Columbia’s bears are a lot like the Chicago Bears most seasons—disappointing. Still, patience is sometimes rewarded with scenes of bushy beasts lumbering toward their seafood buffet as cubs nap or scamper in the shade. Options for accessing the Khutzeymateen are limited; your best bets are a day tour via Prince Rupert Adventure Tours or, even better, an overnight stay at Khutzeymateen Wilderness Lodge, a fully staffed, floating ecotourism outpost within the confines of the park that gives guests up to three days of wildlife-watching, boat tours, and rustic meals amid the immensity of nature. 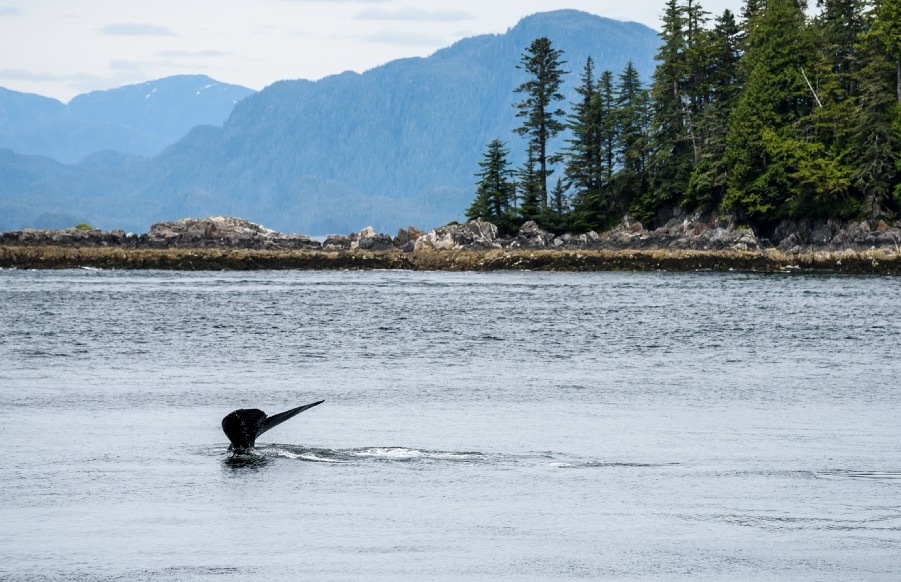 Bears aren’t the only outsize mammals in the vicinity. Humpback and orca whales can often be spotted in the Khutzeymateen Inlet, especially from April to October. Sometimes you’ll only see tails or dorsal fins slicing through the waves, but Zodiac tours (also offered by the companies mentioned in the previous slide) can give you a front-row seat to phenomena such as whales breaching in all their climax-of-Free-Willy majesty. If the lighting is right, the spray from blowholes produces mini rainbows (they should call them “rainblows” if you ask us). And you might get to watch a complicated fishing method called “bubble net feeding.” That’s when one humpback confuses a school of fish by encircling it in a cloud of bubbles, and then the whale's friends open wide and blast to the surface, scooping up as many fish as they can. From the surface, all you see are enormous synchronized swimmers rising from the sea and sinking back into it like extras in an Esther Williams water ballet. 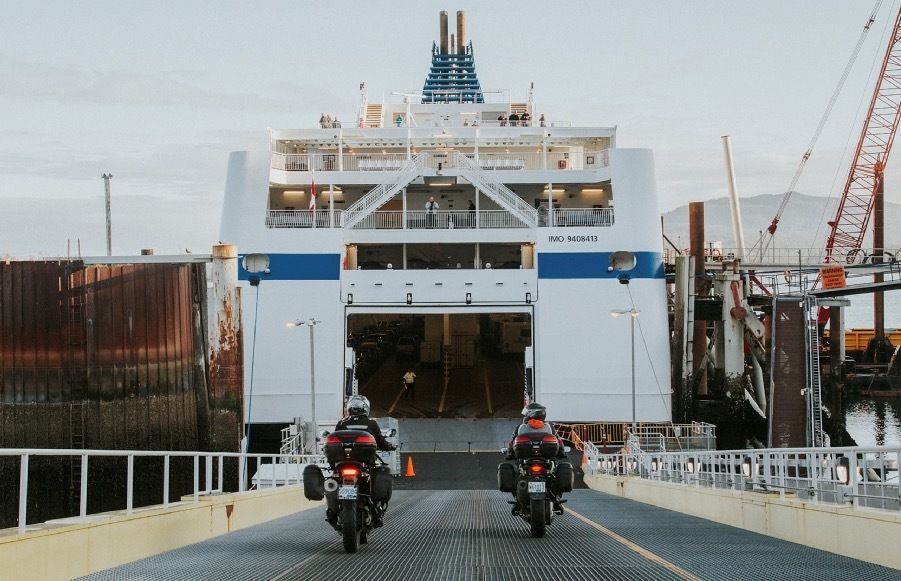 To extend a trip beyond the Prince Rupert region while sticking to the boats-and-bears theme, Northern Vancouver Island is a good—though not necessarily convenient—choice for a next stop. Situated to the south of Prince Rupert, the island is home to the provincial capital city of Victoria on its southernmost tip (but not, somewhat confusingly, the city of Vancouver, which is nearby on the mainland). The northern part of the island remains rugged and remote. To reach it from Prince Rupert, you can fly to Vancouver and then to Port Hardy. Or you can take the 15-hour ferry that leaves Prince Rupert early in the morning and pulls into Port Hardy very late that night. Though it’ll eat up a day of your itinerary, the ferry does plow through some nice coastal scenery along the Inside Passage, a narrow shipping route with wooded shores visible on both sides, as well as the occasional lighthouse, fishing village, and bald eagle to break up the Wi-Fi-less wildness. 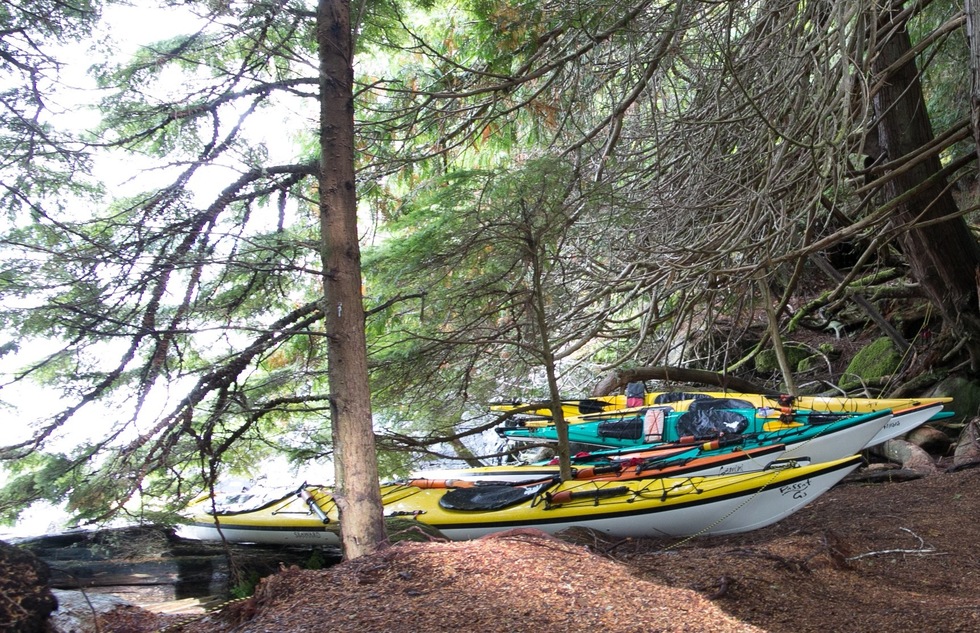 Of all the boats you can board in British Columbia, a kayak is the most elemental. That’s not just because of its simple, nonmotorized means of propulsion (a paddle and whatever upper-body strength you can muster) but also because it gets you closest to the actual elements—wind in your face, mist in your eyes, ocean rolling on all sides (except, hopefully, the top) of the plastic kazoo you’re sitting in. To kayak with near-guaranteed wildlife sightings on Northern Vancouver Island, head to Telegraph Cove, a fishing village-turned-resort about a 45-minute drive southeast of Port Hardy. Kayakers of all skill levels can launch their rented watercraft right from the dock on day tours from North Island Kayak or spend four days taxing their shoulders with Kingfisher Wilderness Adventures, returning to camp each night on nearby Hanson Island (pictured above), where guides prepare meals and help haul equipment. Though paddling gets all the attention on such excursions, it’s the drifting during breaks that’s most rewarding, especially when plashing porpoises, snoring sea lions, and the distant puffs of whale spouts create a kind of sea mammal symphony. 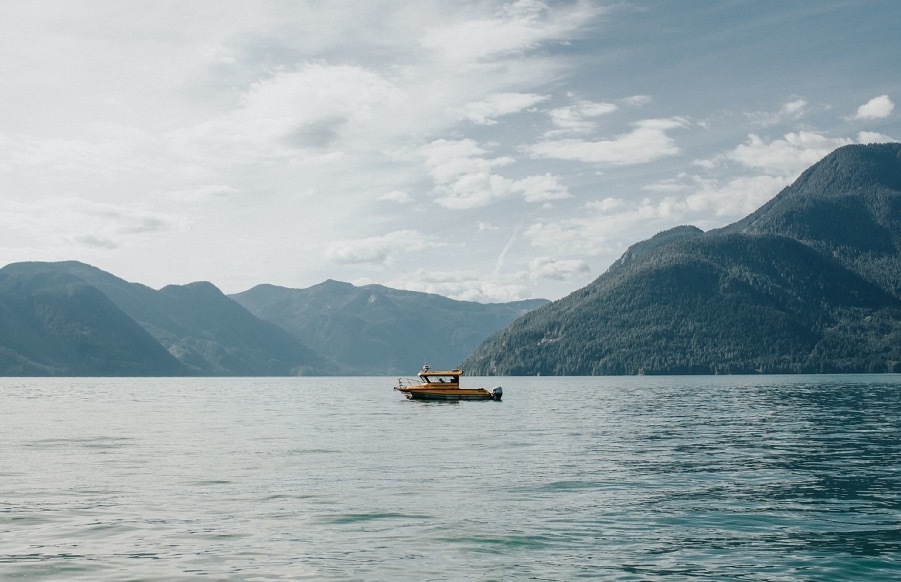 For thousands of years, the sounds, channels, inlets, and islands of this area have been the territory of the Musgamakw Dzawada’enuxw people, a supergroup of four nations with intertwined traditions. On a daylong boat tour from the First Nations-owned and –operated Sea Wolf Adventures (excursions usually launch from Port McNeill, about midway between Port Hardy and Telegraph Cove), guides supply rich context about spots such as Thompson Sound and Gilford Island, covering the mythological (telling folk tales about wolves trying to reason with hunters), the cultural (explaining masks, totems, ocher cliff paintings, and potlatches), the historical (detailing how the difficult-to-traverse landscape helped people escape government persecution), and the economic (describing the constant grab for natural resources by outside business interests). Plus, you might see more humpback whales, dolphins playing in the boat’s wake, and bears scraping up mussels and popping them into their mouths, shells and all. It’s a tour that stuffs all the best parts of British Columbia’s northern coast into one day.