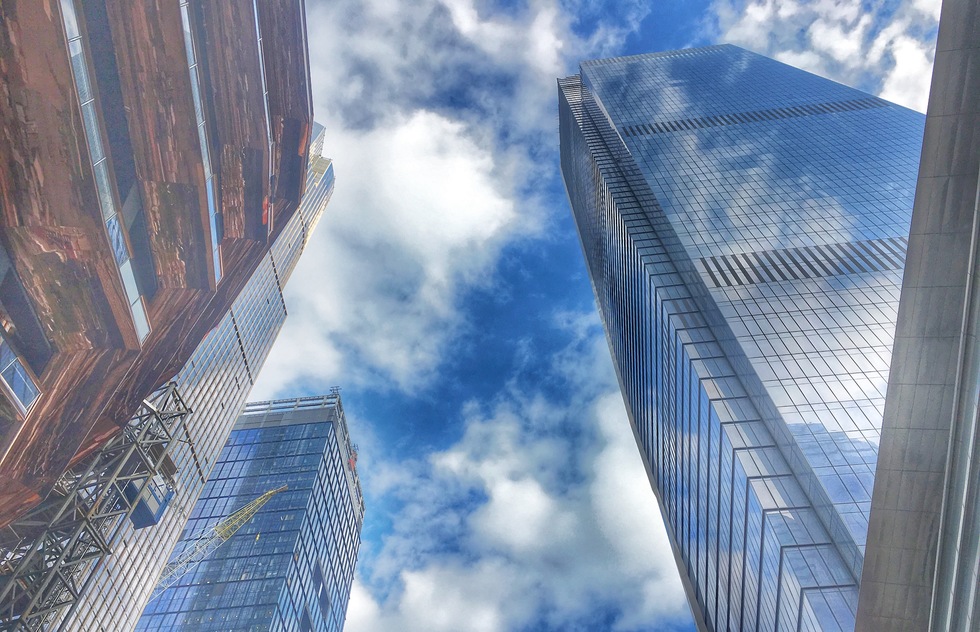 By Pauline Frommer
Ambition is skyscraper-sized in New York City. And sometimes it involves big ole glass-and-steel towers, or in the case of Hudson Yards, a whole litter of 'em. Hudson Yards, when finally completed in 2025, will be the largest private real-estate development in United States history. This new neighborhood will span 28 acres from Tenth Avenue to the Hudson River, between 30th and 34th streets. Most of Hudson Yards has been constructed above the 30 active rail yards that are attached to Pennsylvania Station (those yards will all be underground when the project is complete). Included in the plans are a major new arts center, an Escher-like tower of stairs (that will be climbable), one of the highest observation decks in the world, an uber-fancy hotel, both residential and retail space, swish new restaurants from old guard foodies, and parks with lots of public art in them.

The project has been a controversial one (more on that later) but will undoubtedly become one of the city's top tourist attractions. What will it offer? After the "hard-hat tour" for press that I took of the construction site, I have a few guesses. 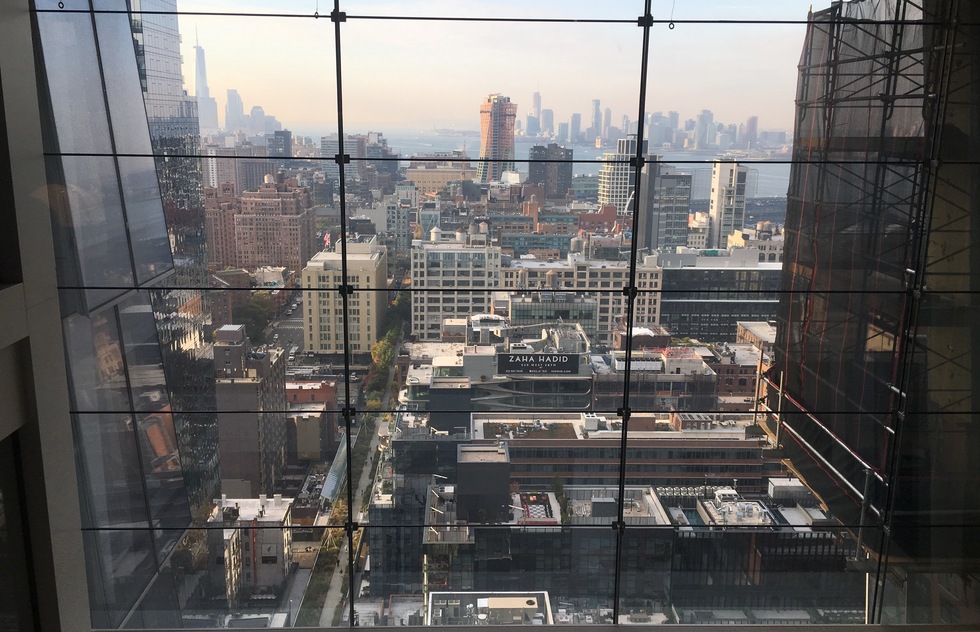 Pauline Frommer
Scintillating Views
This shot was snapped out of a 24th-floor window at 10 Hudson Yard. But tourists visiting in the not-so-distant future will get far more Instagrammable pictures from the coming Observation Deck. Set on the 100th floor of 30 Hudson Yards, it will be the highest outdoor observation deck in the Western Hemisphere, and the fifth highest in the world, when it opens (date not yet set). And it may well be the scariest, as the sadistic designers have planned a see-through glass floor and angled glass wall encirling the jutting deck, which should give visitors the illusion of floating in space.

A restaurant will be attached to the observation deck (should you decide to gaze and graze). Several other eateries at Hudson Yards will also have an elevated perch, promising unbroken views to the water. 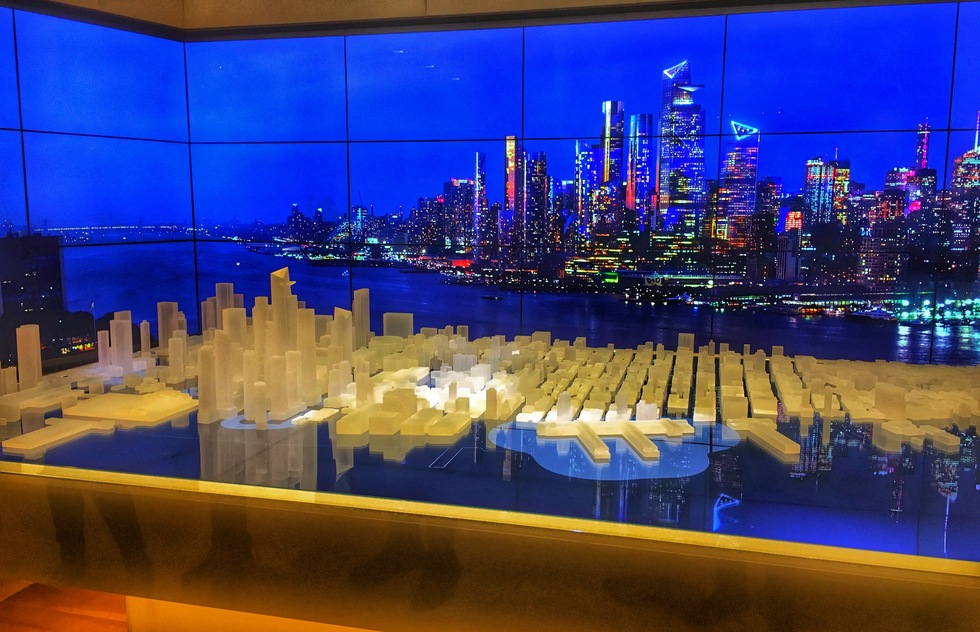 Pauline Frommer
An Architectural Potpourri
This luminous model shows the entire Hudson Yards compound (to the left) in the context of its neighborhood (all of the shorter buildings to the right). Though it's hard to tell from this photo, each of the buildings will have its own unique profile. The developers have worked with an array of top architects—Diller Scofidio + Renfro, Rockwell Group, Kohn Pedersen Fox Associates, and others—to create a planned site that, they hope, will look like it grew organically over a number of years (since every tower will have its own architects). This is a big departure from the Rockefeller Center model—Gotham's last major urban development project. At Rock Center, the architects and designers strove—and achieved—an impressive level of design unity. That is not a goal here, though with the acres of glass that cover these monolithic buildings, I don't think they'll look as different, one to the next, as the developers seem to expect them to.

What this model also shows is how different the development looks from the rest of this formerly industrial, low-profile neighborhood. There is a worry, among the people who live nearby, that the development is going to destroy the character of the neighborhood. There's also resentment—and here's where the controversy comes in—that the city has spent billions to make way for Hudson Yards. That included building a new subway station, buying the air rights above the yards from the MTA, and investing in the new parks that will be here. This is a luxury development primarily, though there will be some low-cost housing. Was it appropriate for the city to have spent taxpayer money this way?  The developers have claimed that the city's investments will be repaid in spades from the tax revenues on all of the jobs this new development will create and enable. Only time will tell which side is correct. 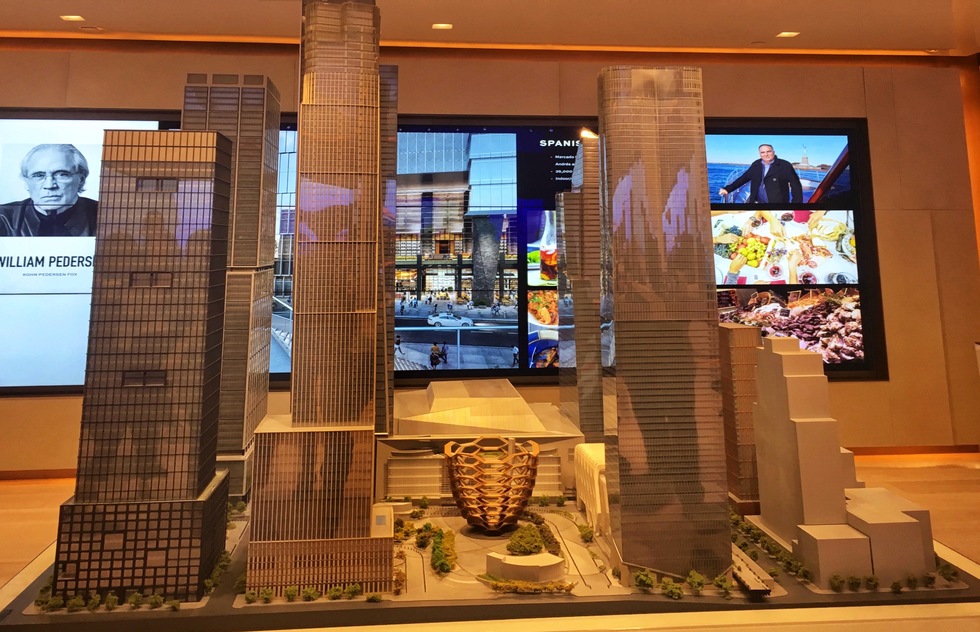 Pauline Frommer
The East Side First
This other model shows the part of the site that is already open, or will be open soon—the Eastern Yard. On March 15, 2019, the temporary walls that are stopping the public from coming into the center of this complex, which is today a construction zone, will come down. At that point, the building known as "The Shops and Restaurants at Hudson Yards"—yeah, they could have found a catchier moniker—will debut. It's the shorter structure behind the massive sculpture in the center. Along with a lot of same-old, same-old chains (Banana Republic, Zara, The Body Shop), this five-story marketplace will be home to New York City's first Neiman Marcus and the chi chi Dallas boutique Forty Five Ten. This is also where the restaurant collection will be housed. More on that later.

Eventually, in other parts of the site, there will also be what was described to me as "fast casual, click-to-brick" shops. After some pressing on what that jargon meant, I came away with the notion that these would be stores that were previously online only, that many would be cashless, and "by delivery only, so you won't have to lug things out of the store. It will be delivered to you in 90 minutes." When I inquired as to whether that meant clothing would only be displayed and not available to try on, I was told no, you'd be able to test products, just not walk out of the store with them. Which I suppose is a good thing if you're shopping for....armoires...or very heavy earrings...or....well, maybe it's more of a gimmick. 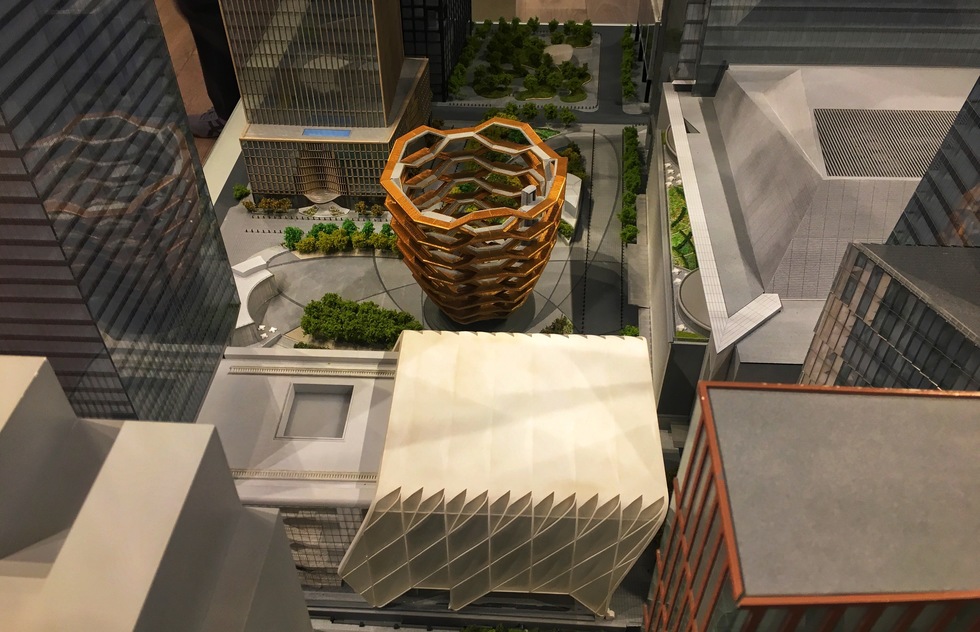 Pauline Frommer
Thoughtful Greenery
See those little trees on the close-up of the model? They represent the veritable forest that the developers have been growing around the Tri-State area, so that when the complex is ready to open, it will be shaded by a mature arbor. Not only will the trees be big and leafy, they will have the most pampered roots in Manhattan (insert your own beauty salon joke here). Because the development is being built on platforms above the rail yards, the designers are making it easier than usual to get below ground level. Electrical and other wires will always be quickly and efficiently accessible, and the dirt that encases the roots is being specially "air conditioned" by wired and cooling slabs of concrete, their temperatures controlled by computer. The trees will be among the 28,000 plants that will eventually find a home here and also provide a home, it is hoped, for winged creatures. The vegetation has, in many cases, been specifially chosen to attract bees and migratory birds. 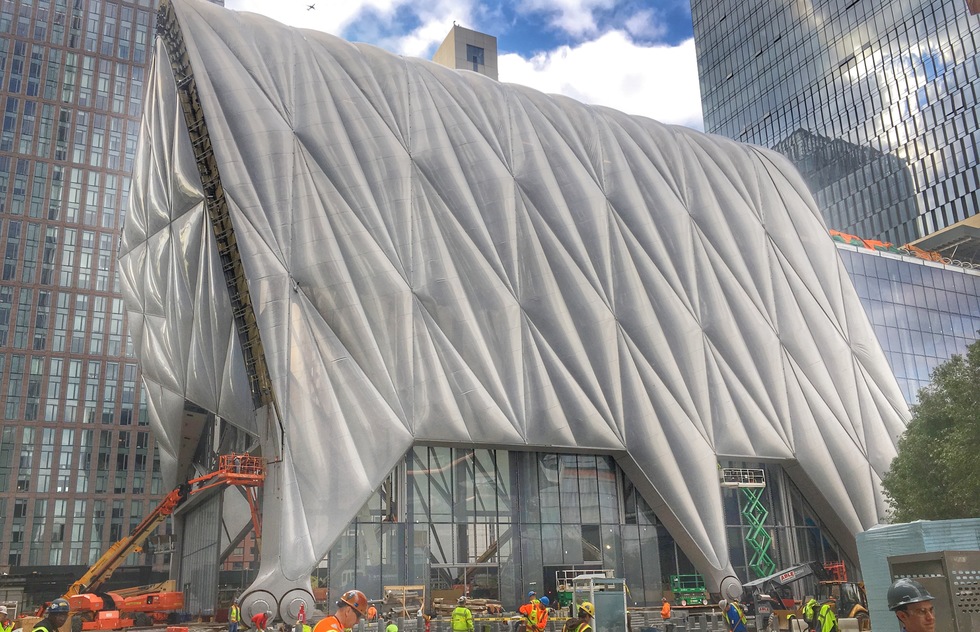 Pauline Frommer
The Shed: A Splendid New Space for the Arts
This magnificent space, all 200,000 square feet of it, will be a non-profit venue for performances of all kinds, visual art, and multidisciplinary events. It has been announced that the work of conceptual artist Lawrence Weiner will be the debut offering. Take a look at the wheels (more info in the next slide one those). 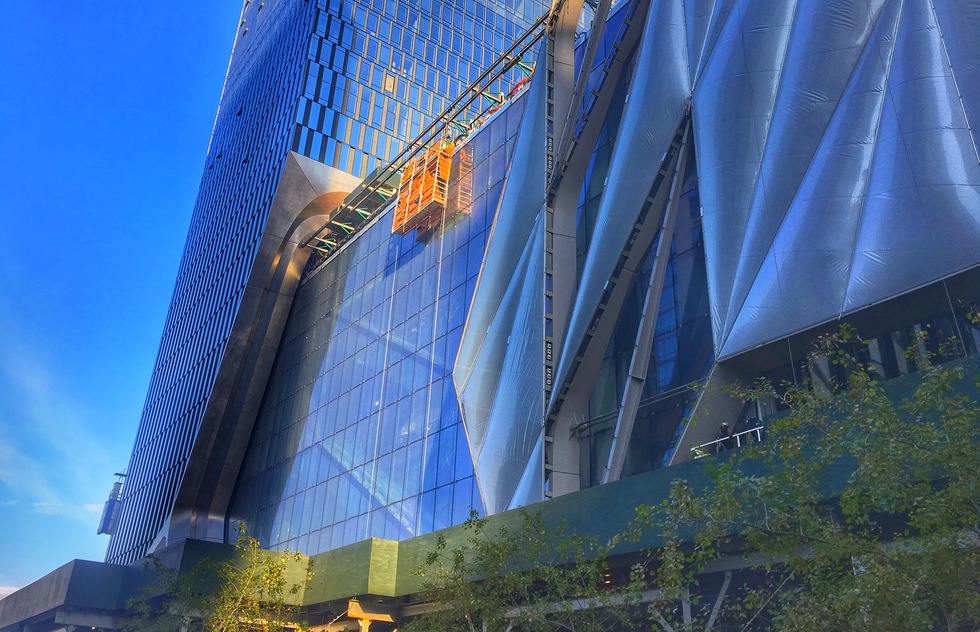 Pauline Frommer
Another Look at The Shed
The building that houses this Shed is on wheels (as I noted in the last slide). That is so the space can morph into whatever the artists inhabiting it need. When their work requires outdoor space, they'll be able to create a plaza for that by having the space shown here roll backwards and nest within the larger tower that it is attached to. 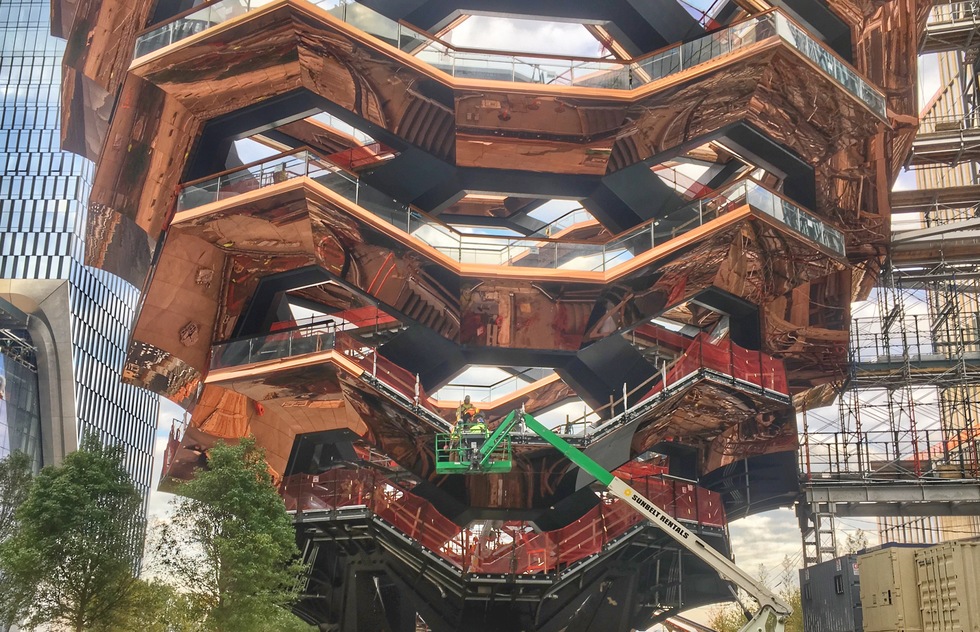 Pauline Frommer
Vessel
As Taylor Swift famously opined, "Haters gonna hate, hate, hate." No part of the Hudson Yards elicited quite so much derision when the renderings were made public, as this massive, interactive statue. Designed by Thomas Heatherwick, it's covered by copper-colored stainless steel, is either basket- or pineapple-shaped (depending on your Freudian disposition), and is made up of 154 sets of stairs that interlink in a complex fashion. For the Fitbit set: That makes almost 2,500 individual steps (though there is an elevator to the top, as well). I was ready to dislike it, too, but it takes on a certain kooky majesty in person. Yes, its gold skin is a little too Austin Powers-ish, but its interlocking weave, done on such a massive scale, compels and holds the gaze. I wouldn't be surprised if it ends up New York City's Eiffel Tower: reviled when first erected, but eventually the city's most beloved icon. 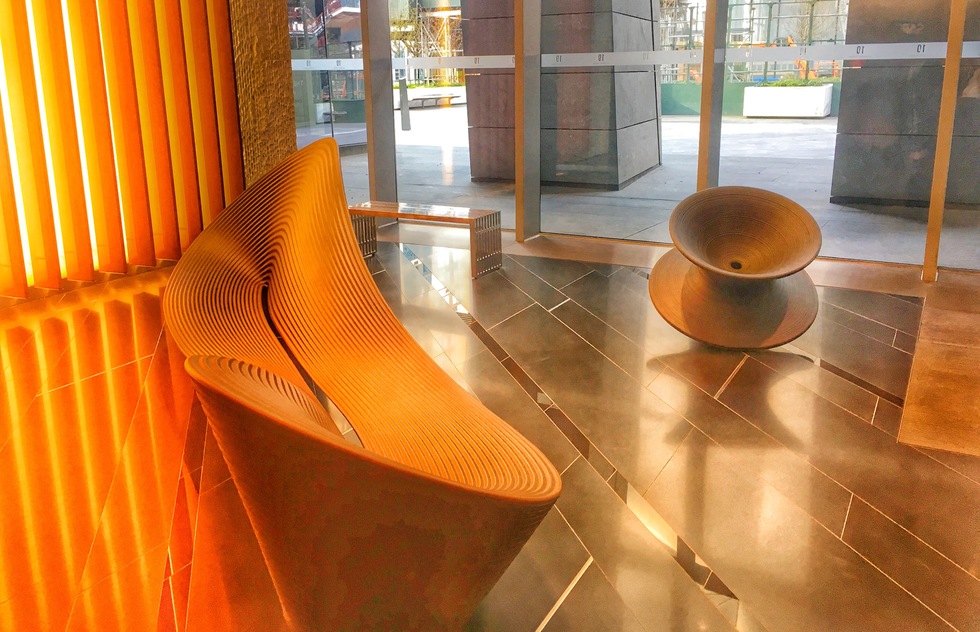 Pauline Frommer
Cool Chairs
Thomas Heatherwick, the artist behind Vessel, also designed these chairs, found in the off-the-plaza lobby of 10 Hudson Yards. The smaller one spins like a carnival ride without ejecting the sitter. Try it, you'll like it. 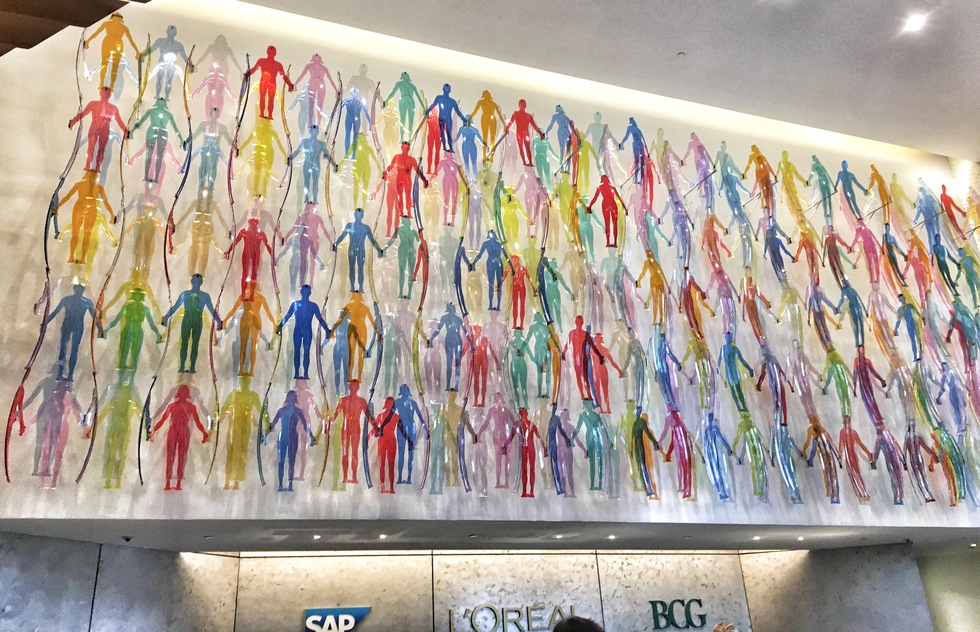 Pauline Frommer
Art—Everywhere
A number of artists have been commissioned to create both indoor and outdoor art specifically for Hudson Yards. Names should be announced shortly. This piece, called Human Sculptures and the Light of Consciousness, graces the area above the security desk at 10 Hudson Yard. It's by Jonathan Borofsky. 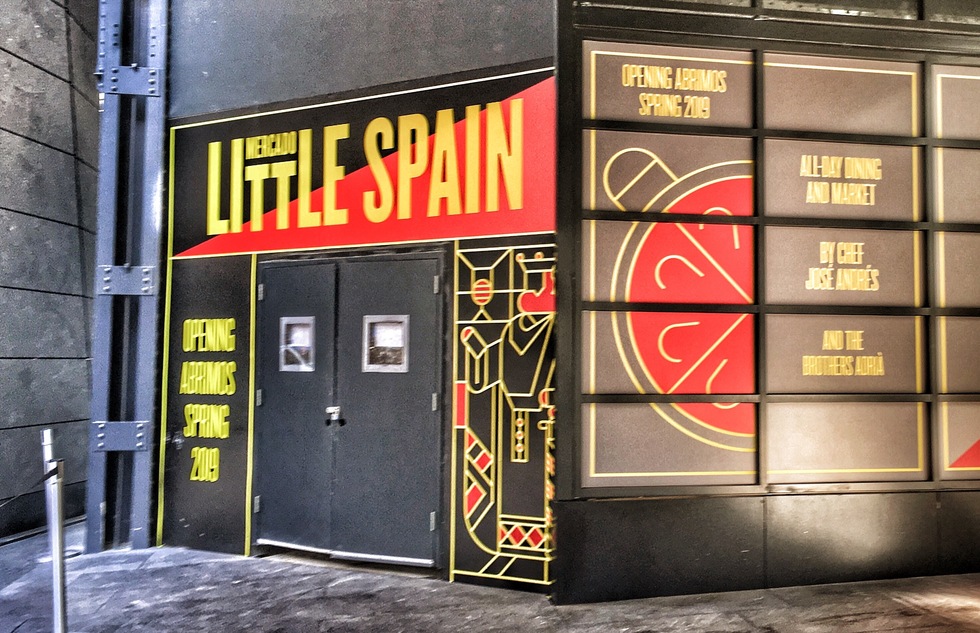 Pauline Frommer
Celebrity Chef-Helmed Restaurants
Pictured here is what will be the entrance to Hudson Yards' Spanish-themed market, created by José Andrés. It would be a coup for most new developments to snag the services of a food star like Andrés, but he's just one big name among many here. Thomas Keller, of Per Se and The French Laundry, picked his fellow chefs for the project, and will be creating one of his temples of gastronomy. He'll be joined by David Chang (of the Momofukus), D & D of London, and Costas Spiliadis. Alas, no female chefs have been given the chance to run the major food venues here—a short-sighted move in a city that has nurtured such major talents as Gabrielle Hamilton, April Bloomfield, and Missy Robbins. 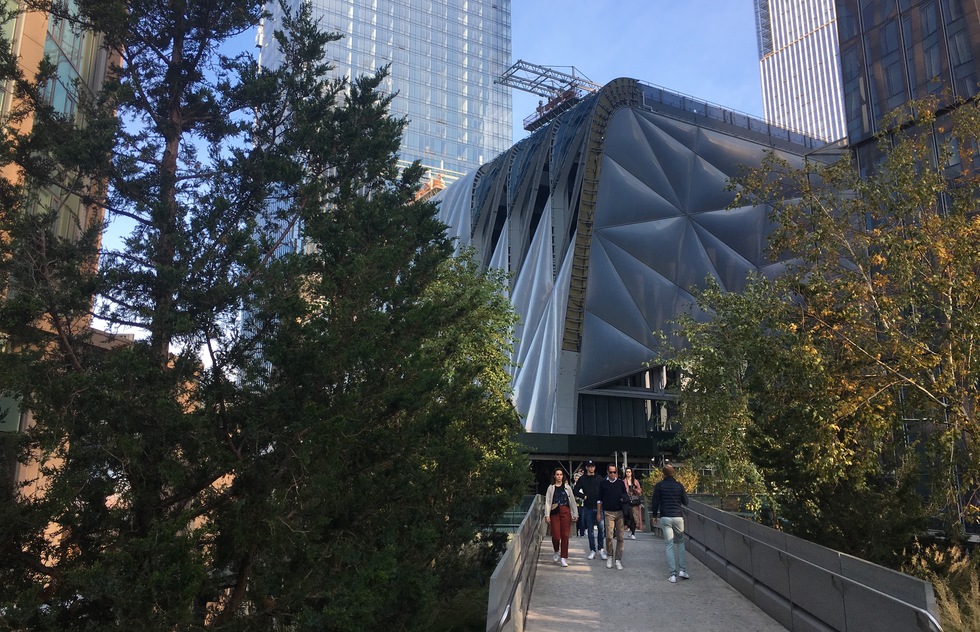 Pauline Frommer
Another Excuse to Walk the High Line
The southern loop of the famous High Line elevated park wraps around part of the complex (as pictured). When Hudson Yards is complete, it will be possible to walk from its uptown edge at 34th street and onto the High Line, following the park walkway all the way past 14th Street to Gansevoort Street. That's a mile-long stroll in the heart of Manhattan during which you'll never have to wait for a traffic light or cross a street. Sweet!
Arts and Culture
Family & Kids
Food and Drink
Honeymoons
Hotels
Local Experiences
Photography
Senior
Single
Vacations