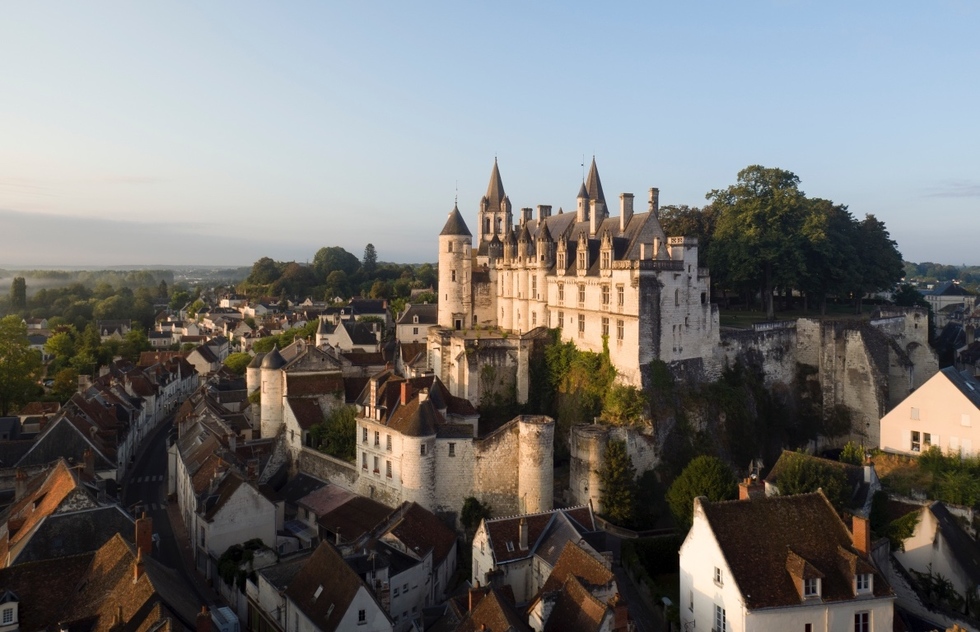 Reached by a 75-minute train ride southwest of Paris, the luscious Loire Valley is crowded with such sensational castles that it is classified as a UNESCO World Heritage Site. With more than 300 châteaux to see, nowhere else in the world can claim such a high concentration of regal residences. From formidable medieval fortresses to extravagant Renaissance estates, we think these tower over the rest. 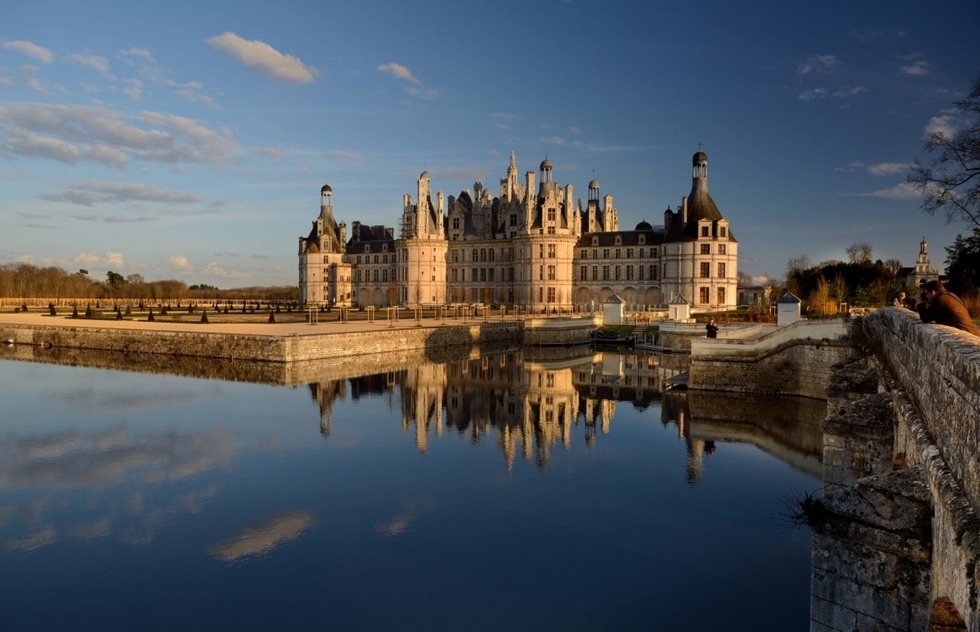 The largest château of the region and an icon of France’s lofty aspirations during the Renaissance, Chambord is a must for any first trip to the Loire. Begun in 1519 as a not-so-humble hunting lodge for King François I, the perfectly symmetrical edifice shed what were considered the prerequisites of a medieval fortress. Legend has it Italian master Leonardo da Vinci, who was working for François at the time, played a hand in the castle’s then-groundbreaking design. At the very least, he gets credit for inspiring its revolutionary superimposed staircase. As you tour the castle’s vast rooms, be sure to check the walls for carved “F” emblems and salamanders—that was François I marking his territory everywhere. End your tour on the castle’s spectacular terrace, where the ladies of the court once watched the men returning from the hunt (the Loire Valley teemed with game then) and where you can take in a splendid view over the château’s 5,260-hectare (12,992-acre) park and recently restored formal French gardens. 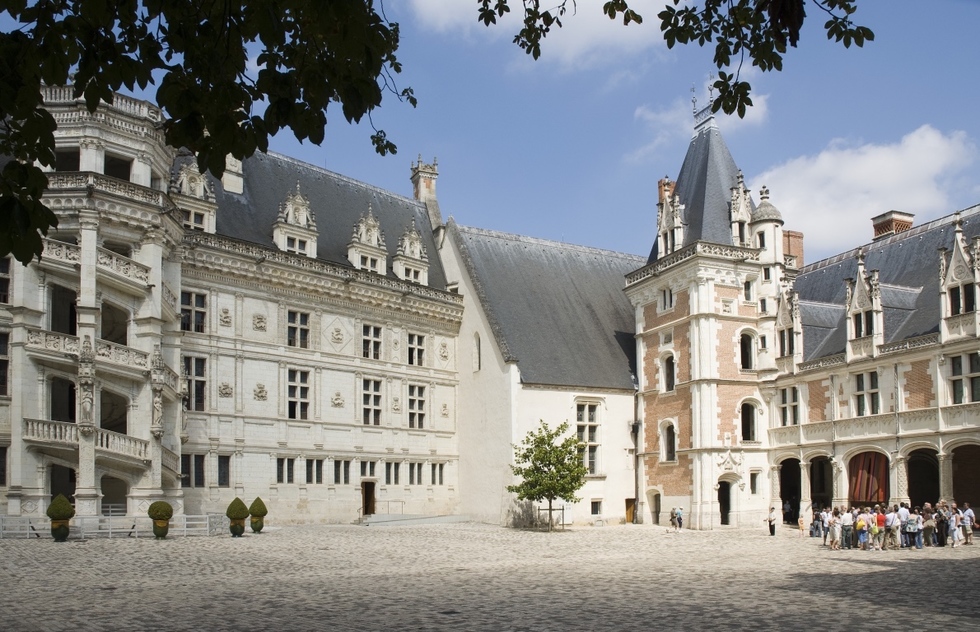 Built from the 13th to 17th centuries, the Château de Blois exquisitely illustrates the evolution of French architecture. In 1515, the medieval castle became the chief residence of François I and thus the seat of the French State. He added on a new Renaissance wing—sporting another showy spiral staircase—and plenty more carved salamanders. Although the seat of government eventually shifted back to the Paris area, several other French royals expanded on the castle and sojourned here—one not so willingly. In 1616, Louis XII banished his conniving mother, Marie de Médicis, to Blois. However, three years later she cleverly escaped by sliding into the moat down a mound of dirt left by builders. The castle’s colorful history (which also includes bloody murder and the secret disposal of inconvenient corpses) is creatively told across its proud facade during the evening sound and light show held from April to September. 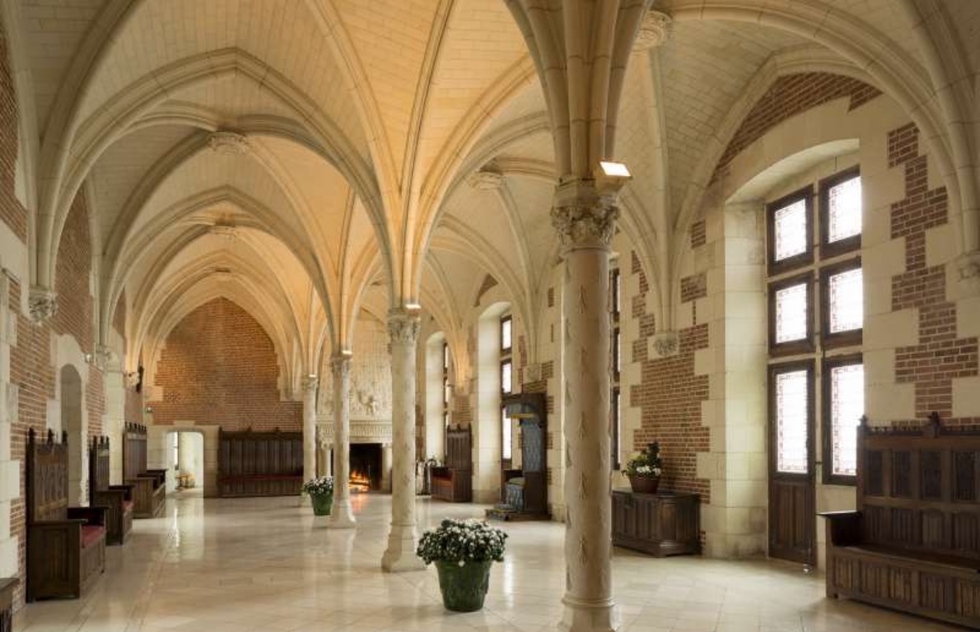 Crowning a hill above the Loire River, the Château d’Amboise was the first French building to feature architectural elements of the Italian Renaissance. In 1492, Charles VIII embarked on the construction of a new 220-room residence with the help of dozens of artisans he’d brought back from his military exploits in Italy. This Italian influence lingered under the reign of François I, namely due to the 1515 arrival of Leonardo da Vinci, who wound up dying in Amboise, so his final resting place, per his wishes, is here. Although the church of his original burial was destroyed during the Revolution, visitors can admire the King’s Apartments; the stately Council Room, home to both a Gothic and Renaissance fireplace; the Tour des Minimes, containing a corkscrew ramp designed for horsemen; the Council Room (pictured); the soaring vista of the town and river from the panoramic terrace; and, of course, the tomb of the great da Vinci, now relocated to the château's Chapel of Saint-Hubert. 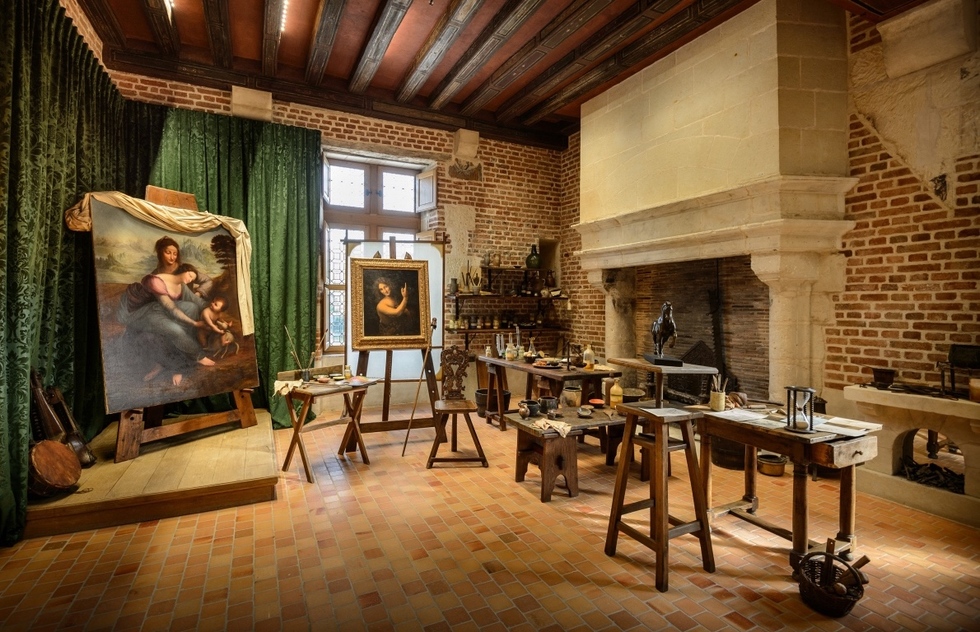 The former summer residence of the royals, it was in the pretty pink brick manor home where Leonardo da Vinci spent the last three years of his life immersed in scientific pursuits. The king even had a tunnel built between Clos Lucé and nearby Château d’Amboise (on the grounds of which he's now buried) so that the two could meet more easily. As "first painter, engineer and architect to the King," da Vinci worked on his last projects and inventions in his workshop at the castle (pictured). Prototypes of these are displayed around the complex and still enliven the imaginations of both young and old. 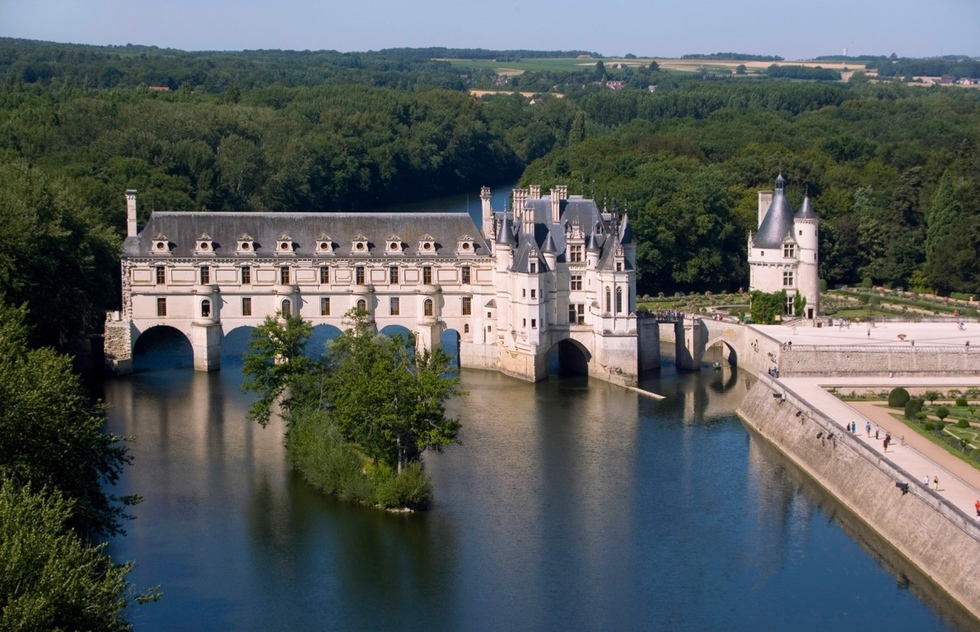 Spanning the Cher River and flanked by an impeccable jardin à la française, this Renaissance masterpiece never fails to elicit marvel. Known as the "Ladies’ Castle," Chenonceau is usually associated with the various grand dames who resided here. In 1515, noblewoman Katherine Briçonnet razed all but the 15th-century keep of the estate’s former medieval fortress so she could build a new château. Seized in 1547 by the crown in lieu of unpaid debts, the elaborate home was gifted by Henri II to his influential mistress, Diane de Poitiers, who further beautified it with the stamp of her own style. Not to be outdone, upon Henri’s death, Queen Catherine de Medici booted Diane and added the elaborate two-story gallery across the bridge. In the 20th century, the gallery acted as a military hospital in World War I and the demarcation line between Nazi-occupied France and the “free” zone in World War II. 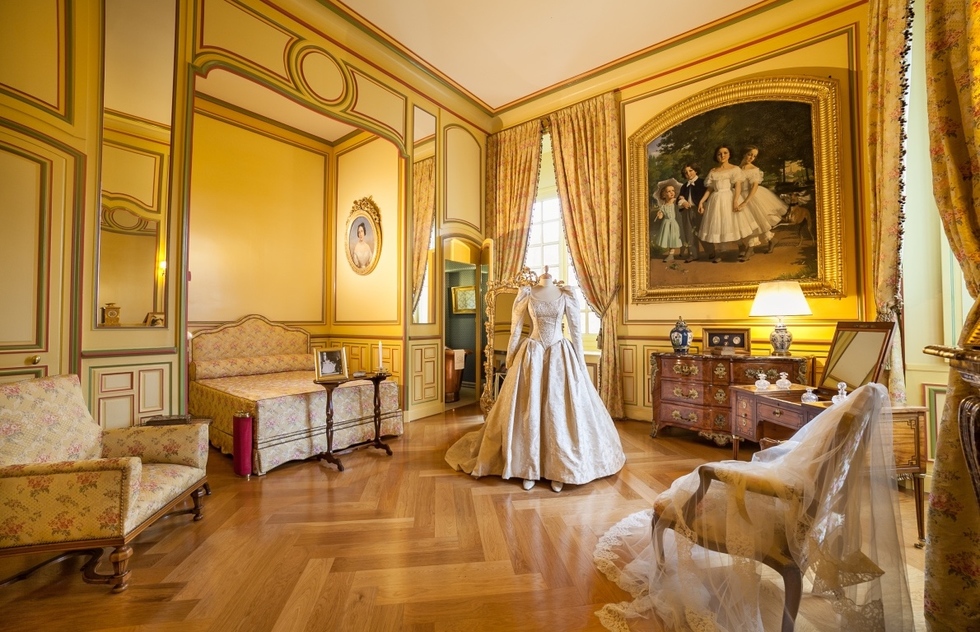 This sumptuous dwelling is still owned by the same family who had it built in 1634 and was one of the first privately owned homes in France to open to the public, in 1922. Wonderfully symmetrical and designed in the Louis XIII style, the elegant Château de Cheverny is richly decorated in antiques, tapestries, paintings, and heirlooms of the ancient Marquis de Vibraye family (as in the pictured bedroom). The castle is surrounded by a sprawling English-style park plus three landscaped gardens. Cheverny is also home to a museum on the Belgian comic book hero Tintin as well as a world-renowned kennel that rears over 100 prized Anglo-French hounds at a time. You'll likely see some of the pedigreed dogs parading around. 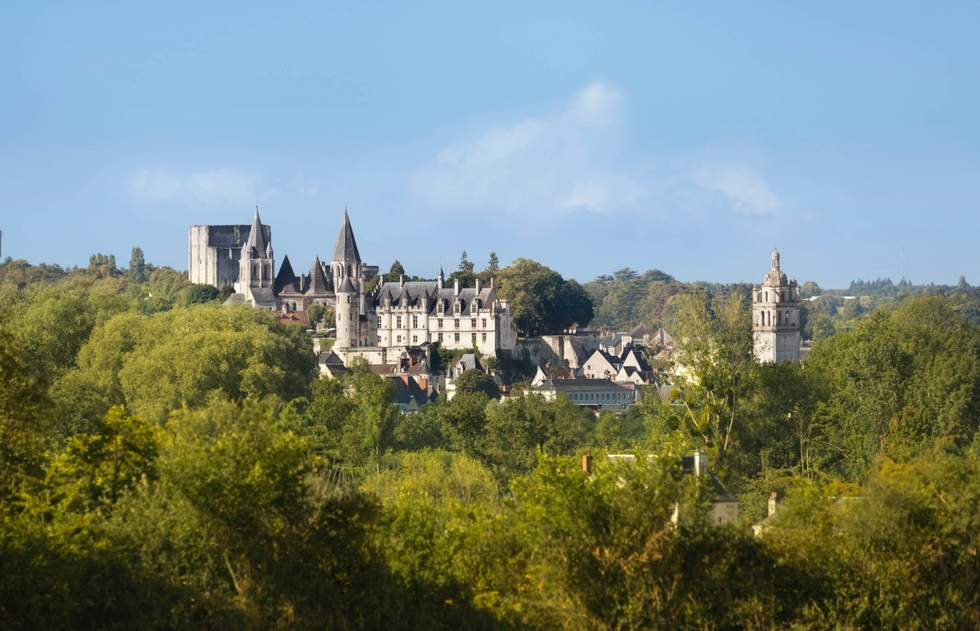 One of the most impressive medieval edifices of the Loire, the Château de Loches is recognizable from afar thanks to its colossal 36-meter- (118-foot-) tall keep dating to the 11th century. The château is best known for its loveliest resident, Agnès Sorel, the mistress to Charles VII, nicknamed la belle des belles (the beauty of beauties). The castle, which was given to her by the King, was her home until her mysterious premature death in 1450 (we still don't konw if it was dysentery, mercury poisoning, or something more sinister). After touring the mansion, the keep, and medieval garden, soak up more ambiance in the well-preserved town of Loches. A good time to visit is August, when the complex hosts a lively medieval festival. 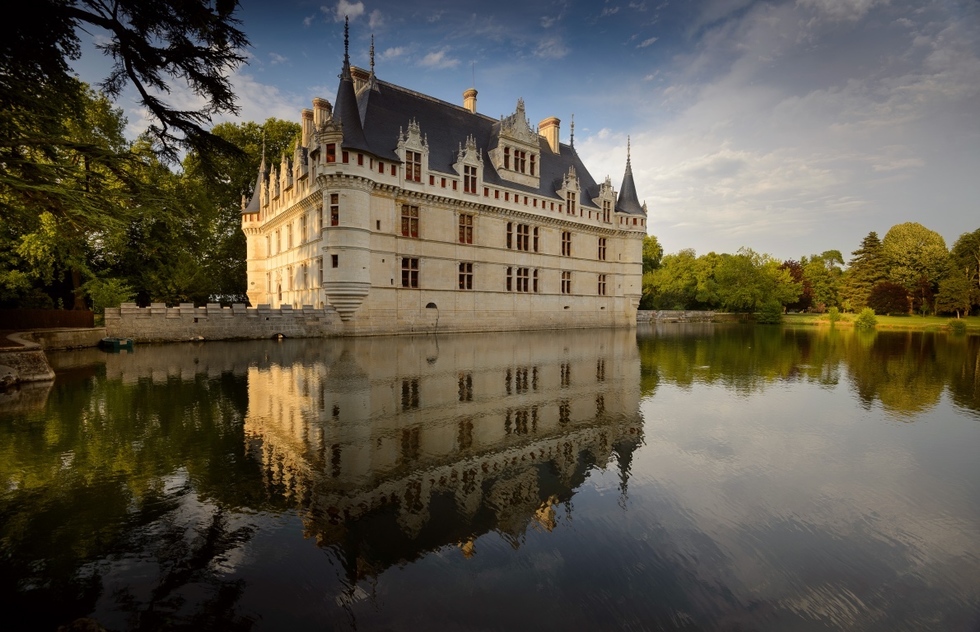 Sitting on an island in the Indre River, this jewel box with towers and turrets is the most romantic château of the Loire. The enchanting Château d’Azay-le-Rideau was commissioned in 1518 by François I’s finance minister, Gilles Berthelot, and his wife, Philippa, who oversaw its construction. Unfortunately, their dreams of a country-house existence were short-lived. Accused of misappropriating state funds in 1527, Berthelot fled, leaving his unfinished castle in the hands of the king. Too busy with his other building projects, François gifted it to Antoine Raffin, one of his knights-in-arms, whose family owned it until the eve of the Revolution. In 1905, it was acquired by the French state, and a more recent refurbishment has returned the building and its lavish apartments to their former glory. 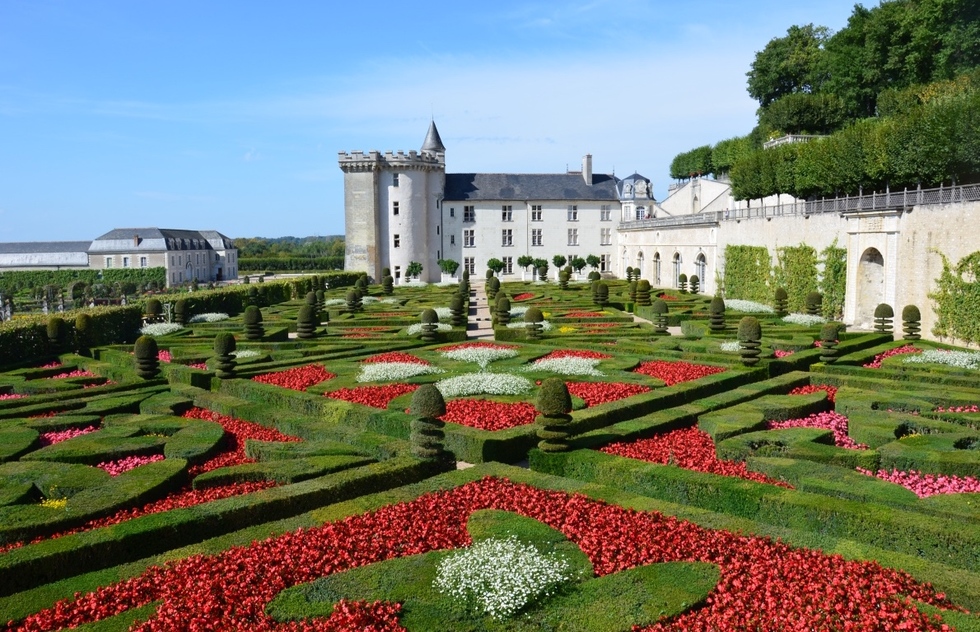 Few French gardens can rival those of Villandry. Replacing a feudal castle which once stood here, this "new" 1530s castle was commissioned by another of François I’s Finance Ministers, Jean le Breton. The U-shaped Château de Villandry is far from shabby, but its main draw is definitely its gorgeous grounds. Spread over nine hectares (22 acres) and four terraces, the landscapes were restored in the early 20th century by Spanish doctor and scientist Joachim Carvallo, the great-grandfather of the current owner. The plantings are laid out in six distinct areas, among which are allegorical gardens bordered by box hedging, a water garden with a large reflecting pool and fountains, an ornamental kitchen garden, and an organic vegetable patch that provides fresh ingredients to the castle’s café. 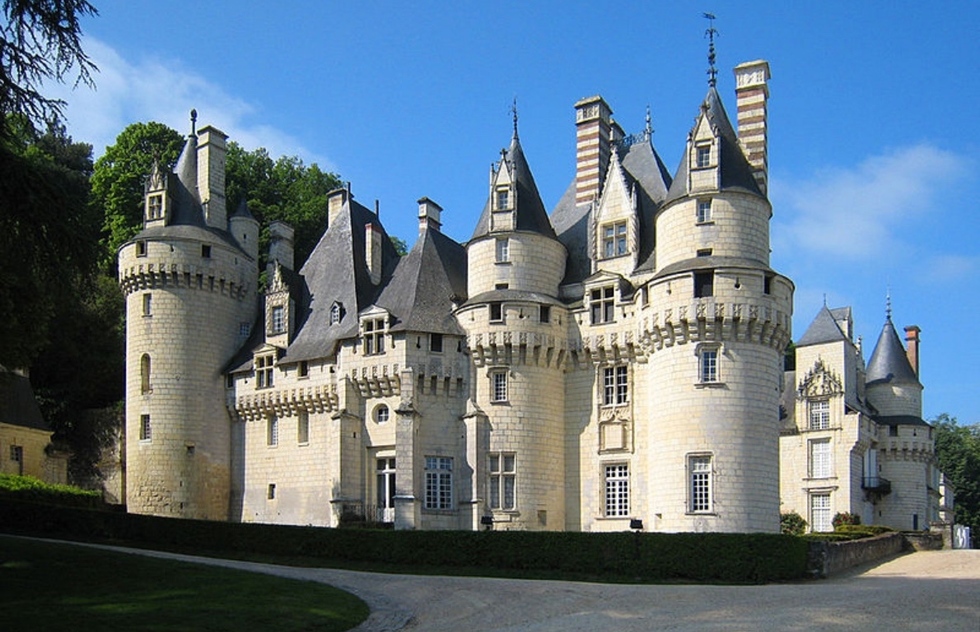 A true storybook castle in more than just appearance, the turreted Château d’Ussé was the inspiration for Charles Perrault’s beloved fairy tale about Sleeping Beauty. High above the Indre River, the fortress was built in 1424 and, when it was no longer needed for defense, the north wing was torn down to open up a greater view. Visitors to the privately owned castle can tour a selection of sumptuous rooms including the dining room, the dungeon, the Renaissance chapel, and the opulent royal apartments, some featuring ancient tapestries and displays about its fictional belle. Before you leave, take a wander through its terraces laid out by the Louis XIV’s legendary landscape designer, Le Nôtre.