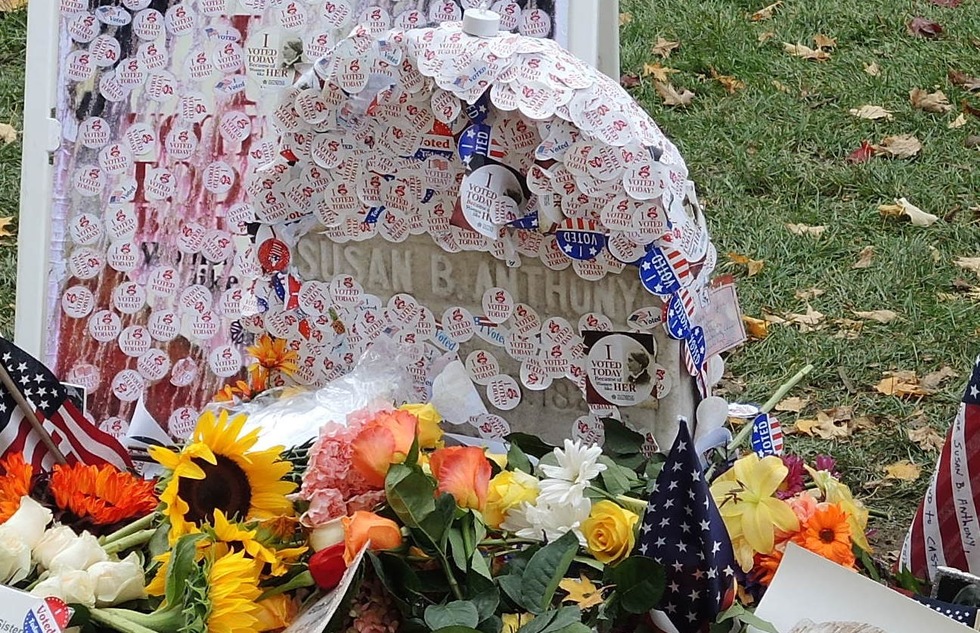 Get to Know Women Who Shaped U.S. History at These Inspiring Sites

With the far-from-finished issue of women’s equality once again at the forefront of the national conversation, now is a good time to learn more about the women who got us to this point. From entering the workforce to gaining the vote, leading movements, and shaping minds, women have played a pivotal role in the history of the United States, right up to the present. These landmarks and museums across the country honor those accomplishments and provide invaluable context for travelers seeking a fuller understanding of today’s struggles.

Pictured: Susan B. Anthony's gravesite, covered in "I Voted" stickers after the 2016 presidential election, in Mount Hope Cemetery in Rochester, New York 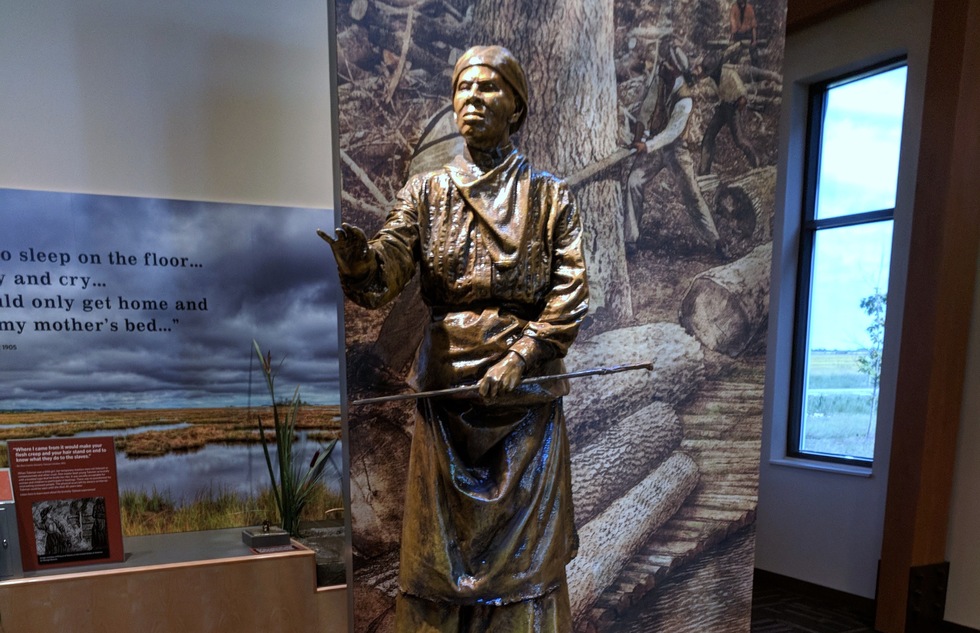 Visitors to the eastern shore of Maryland can see the very same watery landscape that Harriet Tubman ventured through in the dead of night to escape from slavery in 1849, and then returned to on numerous occasions to conduct dozens of enslaved African Americans to freedom as part of her work with the Underground Railroad. As she put it in an 1896 speech, “I can say what most conductors can't say—I never ran my train off the track and I never lost a passenger.”

At the visitor center named in Tubman's honor in Dorchester County, informative and emotional exhibits (like the one pictured) cover her early years, her daring abolitionist achievements, and her far-reaching legacy. For road trippers, the venue is a stop along the Harriet Tubman Underground Railroad Byway, a self-guided, 125-mile-long route connecting sites related to Tubman and the 19th-century antislavery movement. 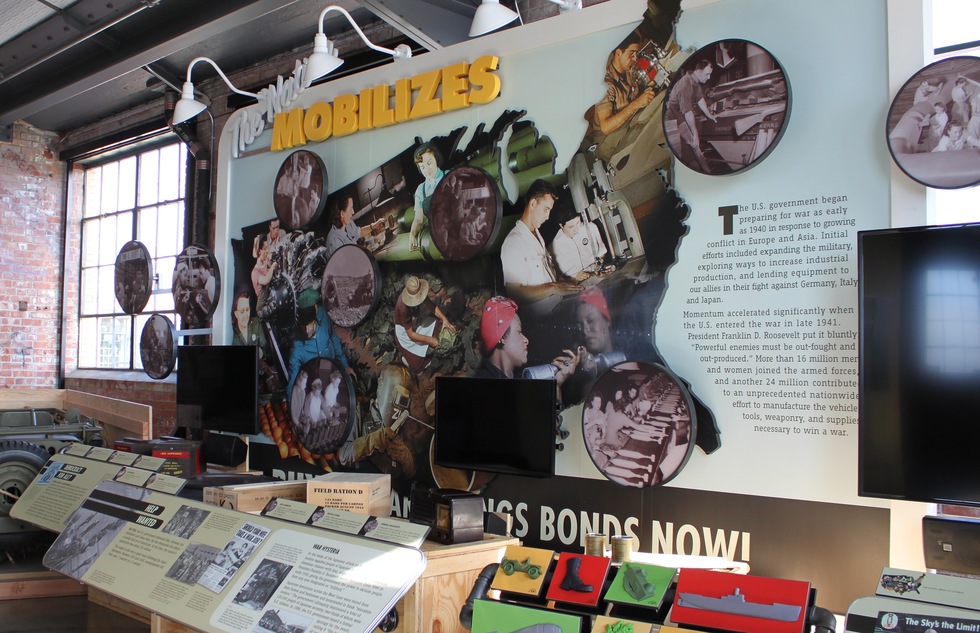 This complex near San Francisco encompasses various World War II facilities that chronicle the significant contributions of civilian women in wartime. You can explore a shipyard, a cargo vessel, childcare centers, a field hospital, and a Ford assembly plant that was adapted to build and outfit military vehicles. Films and exhibits in the visitor center show the era’s impact on the daily lives of Americans, including women laborers getting a then-unusual taste of working outside the home. On select Fridays, it’s still possible to meet a real-life “Rosie the Riveter” sharing her personal memories of life on the home front. Nearby Marina Bay Park pays tribute with the Rosie the Riveter Memorial, a steel-and-granite art installation resembling an abstract naval ship with a walkway inscribed with quotes from women workers. 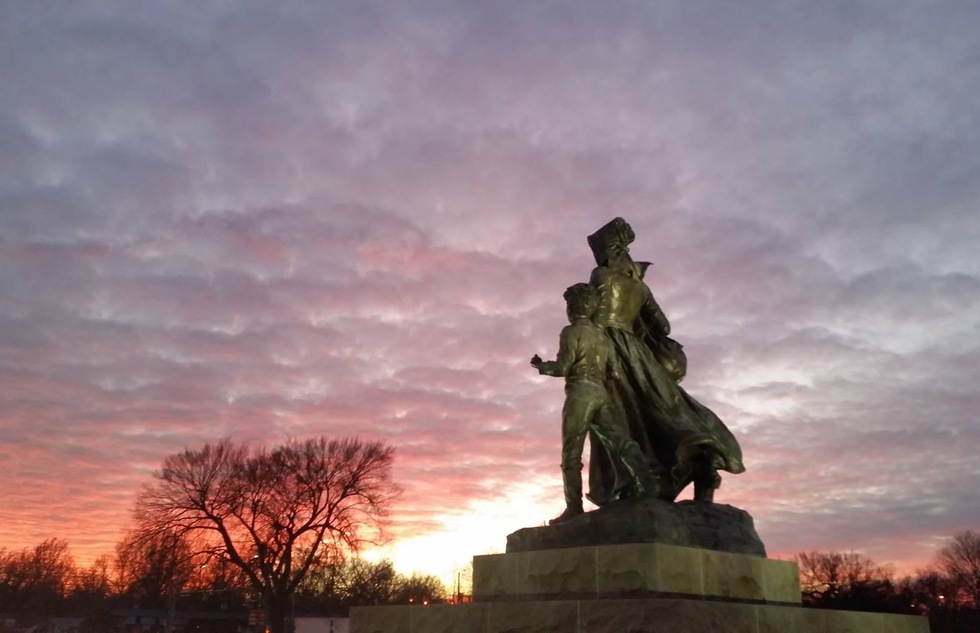 Erected in 1930, Ponca City, Oklahoma’s 30-foot-tall bronze statue of a bonneted woman grasping a Bible in one hand and the paw of a Grapes of Wrath-y child in the other is a monument to the generations of stalwart pioneer women who helped develop Oklahoma. In the adjacent museum (which was added later), the story is told on a smaller scale, with historical photos and everyday objects such as quilts, kitchen and farm tools, and artifacts representing the region’s Native American women. An interactive timeline and walk of fame spotlight notable figures in the state’s history, while the onsite education center hosts craft demonstrations and other special events. 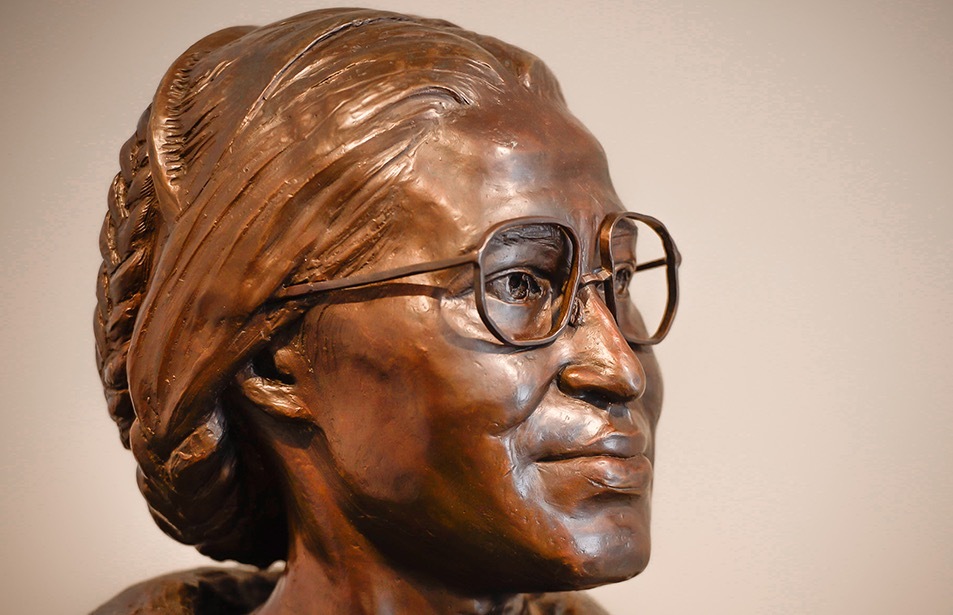 Montgomery, Alabama’s museum dedicated to civil rights activist Rosa Parks is just steps from the spot where she was arrested on December 1, 1955 for refusing to give up her seat on a city bus to a white male passenger. The museum (part of Troy University) puts you in that seismic moment with a simulated reenactment that unfolds as if you’re watching from outside an original 1950s-era Montgomery bus. The museum also documents the subsequent Montgomery Bus Boycott that Parks’s actions initiated, ultimately leading, after more than a year, to the end of racial segregation in the Alabama capital’s public transit system (the boycott would make its leader, local pastor Martin Luther King, Jr., into a national figure). Other noted artifacts at the museum: Parks’s fingerprinted arrest record and a restored 1955 station wagon that was used during the boycott to transport protesters avoiding the bus. 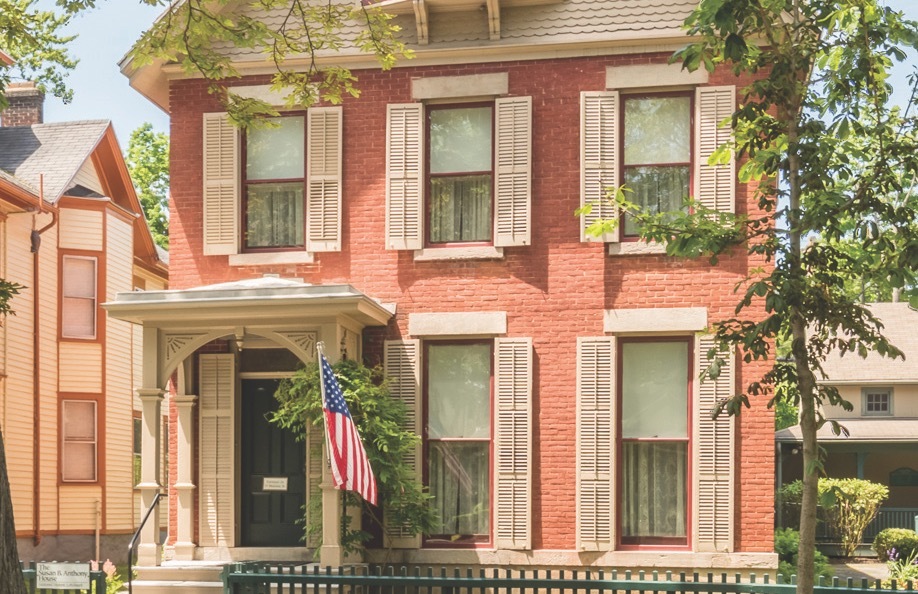 In 1872, Susan B. Anthony was arrested in the front parlor of this red-brick house in Rochester, New York, where she lived with her sister. The iconic suffragist’s crime: trying to vote in a presidential election while female. Today, the spot where that injustice occurred as well as the other rooms of the house, where Anthony wrote lectures and essays, organized campaigns, and met with other activists, have been preserved to look as they did in Anthony’s day, with original furnishings and historic photographs and documents. Other relevant stops nearby: Mount Hope Cemetery, where Anthony’s headstone was covered in “I Voted” stickers following the 2016 U.S. presidential election (Anthony died in 1906—14 years before the 19th Amendment finally guaranteed voting rights to women); and, in Seneca Falls (about an hour’s drive east), the Women’s Rights National Historical Park, site of the first Women’s Rights Convention in U.S. history. 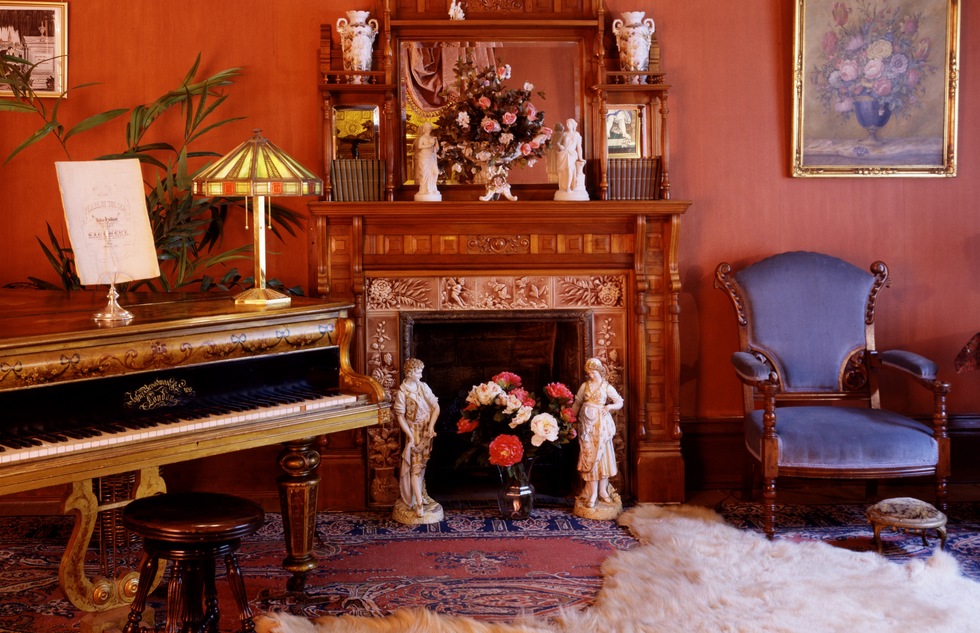 Though known primarily as a survivor of the Titanic disaster, there’s more to the life of Margaret “Molly” Brown than her unsinkability. The daughter of Irish immigrants, Brown wound up in Colorado during the mining boom of the late 19th century. She married a man in that industry, struck it rich, and became a tireless social reformer, eventually running for the state senate in 1901. All that’s in addition to her adventurous travels around the world—including the voyage that would make her famous. The Browns’ former home in Denver is a time capsule of American upper-middle-class living around the turn of the 20th century, featuring an elaborate golden entryway and displays of Molly’s jewels, fashions, art collection, dishware, and Victorian decor. 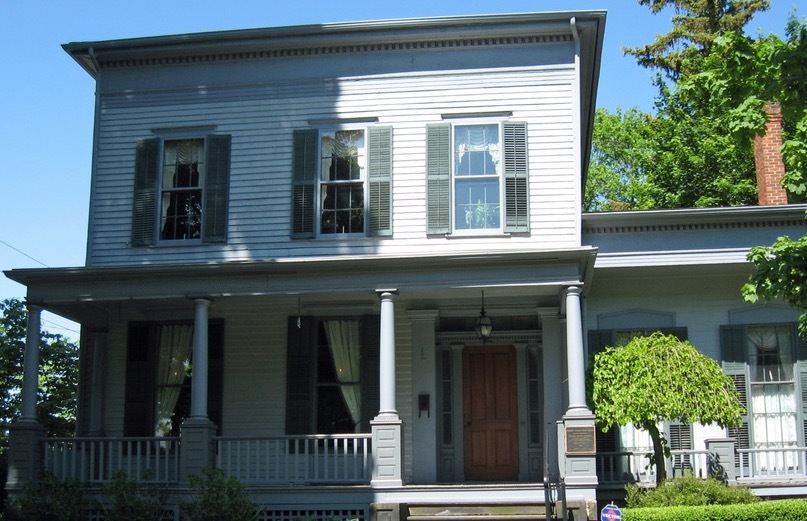 Though less famous today than her friend and mentor Susan B. Anthony, Harriet Taylor Upton was a prominent leader of the women’s suffrage movement of the early 20th century. She was a writer, speaker, organizer, officeholder in the National American Woman Suffrage Association (which was headquartered in her home for a while), and a founding member of the League of Women Voters. Upton’s clapboard residence in the northeastern Ohio town of Warren has been restored to its early-1900s appearance, with period furnishings, a reproduction of Upton’s wedding dress, and photos such as one of Upton with Anthony. A suffrage museum on the second floor displays political pins, dolls of feminist icons, and books about the movement. The gardens outside bloom with black-eyed Susans and other flowers Upton was fond of. 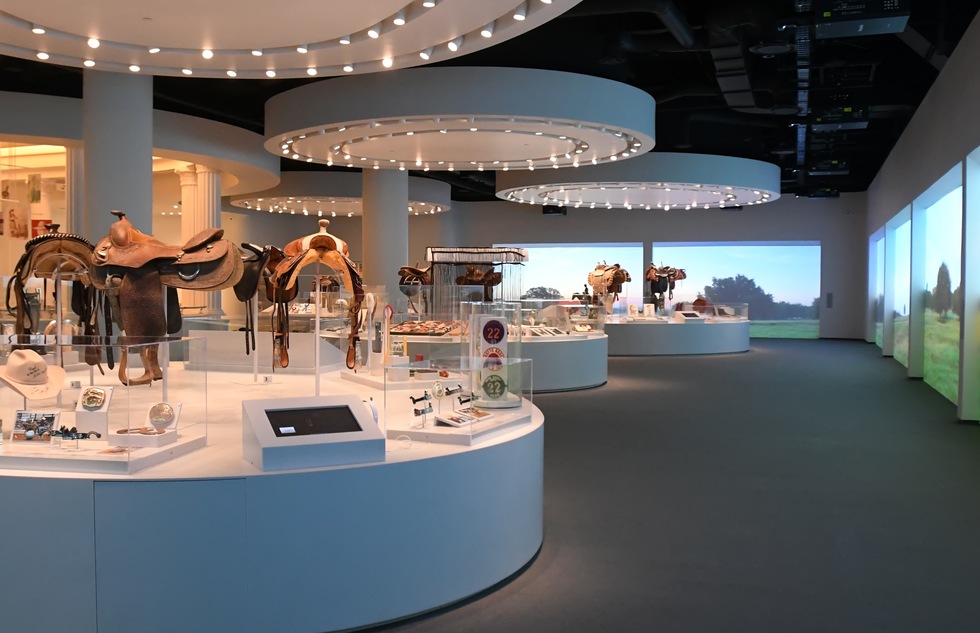 This museum in Fort Worth’s Cultural District tips its Stetson to the women of the American West with a vast trove of photos, clothing, and personal items such as letters, rifles, and saddles. Archival footage lets you see hall of fame inductees in action—you can even meet a hologram of legendary sharpshooter Annie Oakley. The museum takes a broad view of what constitutes a cowgirl, honoring not just obvious choices like Oakley and singing western star Dale Evans, but also Sacajawea of the Lewis and Clark Expedition and artist Georgia O’Keeffe, the preeminent painter of the American Southwest. 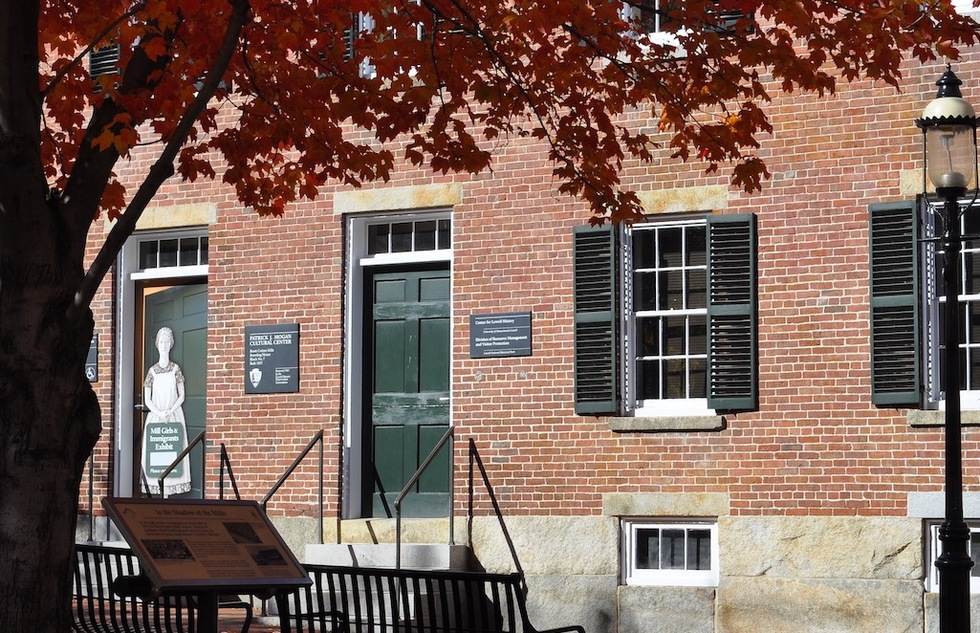 Located about 25 miles northwest of Boston, Lowell was a major textile mill city during America’s Industrial Revolution. From the 19th century until the industrial decline of the 1960s, Lowell’s workforce was powered by immigrants as well as single young women from rural New England. Known as the “Mill Girls,” they worked for brief stints before leaving the factories for various reasons such as marriage, relocation, or other forms of employment. Today, visitors to this national historical park can take a self-guided audio tour of a reconstructed boarding house of the type that companies provided for laborers. You can also see water-powered looms and other equipment, and learn about how employees pushed back against wage cuts and poor working conditions. 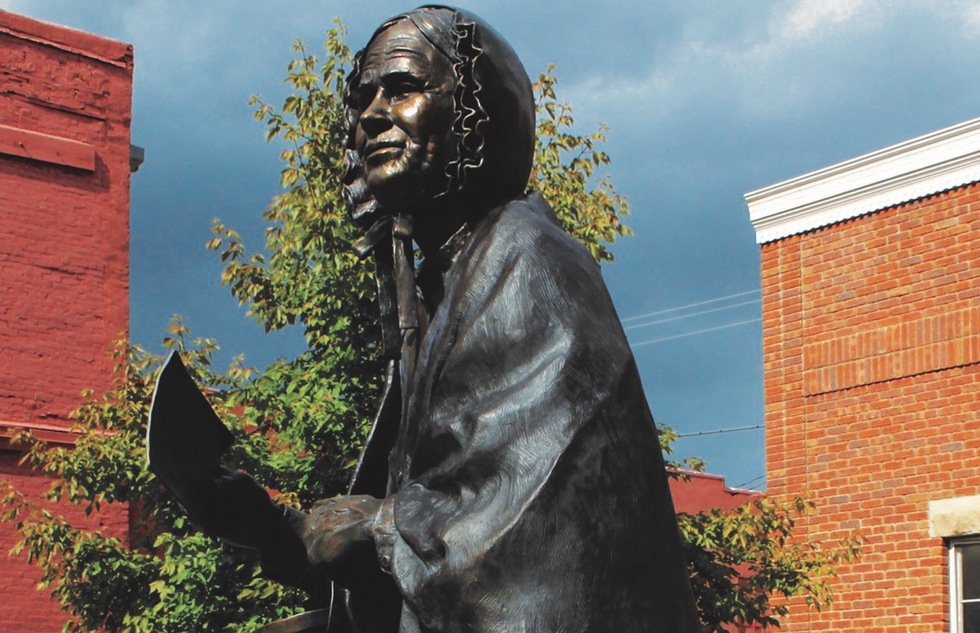 Did you know that Wyoming passed the first law in U.S. history granting women the right to vote and hold office—and in 1869, way before the territory became a state and half a century before the U.S. Constitution would be amended to give women the vote? Rightfully nicknamed the Equality State, Wyoming has several sites connected to its pioneering women, including literal pioneers at the seasonal Cowgirls of the West Museum in Cheyenne. Other female firsts are celebrated at the Wyoming House for Historic Women in downtown Laramie. Here, displays relate the achievements of 13 notable Wyomingites, including Nellie Taylor Ross, who in 1925 became the first woman elected governor in the U.S., and Louisa Swain, the first woman to cast a legal ballot in a general election. A life-size bronze sculpture of Swain (pictured) stands outside the building, located a block from where she cast her historic ballot on September 6, 1870. Each year, the moment is reenacted as part of Louisa Swain Day. 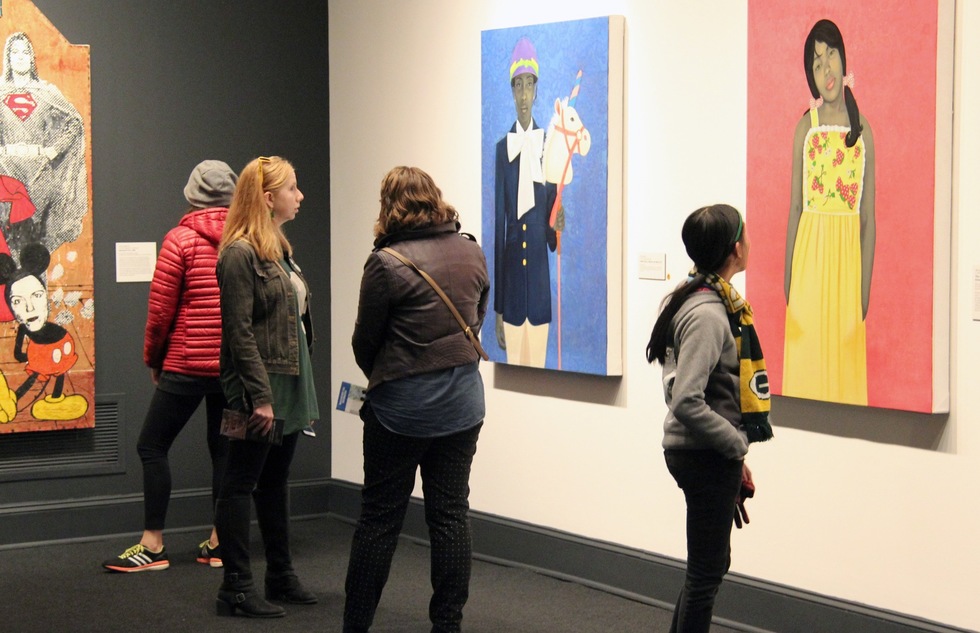 Emily Haight
National Museum of Women in the Arts

This Washington, D.C., institution is the only major museum in the world that’s solely focused on championing the accomplishments of women in the arts. Housed in a downtown Renaissance Revival building that was once a Masonic temple, the collection includes 4,500 works by more than 1,000 women from around the world. Every conceivable artistic medium is represented, with pieces dating from the 16th century to today. To drop a few names: There are paintings by Frida Kahlo, Lee Krasner, and Amy Sherald (who created the portrait of Michelle Obama that hangs in the National Portrait Gallery); sculptures by Sarah Bernhardt and Chakaia Booker (who works wonders with tires); photographs by Louise Dahl-Wolfe; and mind-bending videos by contemporary artists Dara Birnbaum, Mwangi Hutter, and Pipilotti Rist. 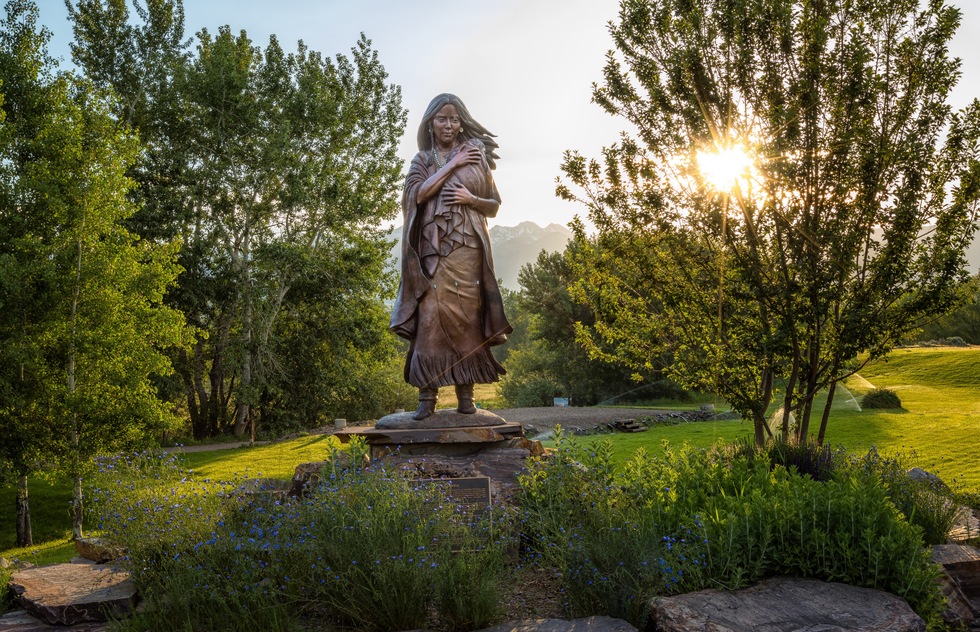 Situated in Idaho’s lush Lemhi River Valley, where Sacajawea grew up, this interpretive center relates the biographical as well as cultural background and legacy of the Agaidika Shoshone woman best known as the principal guide for the Lewis and Clark Expedition exploring land west of the Mississippi River from 1804 to 1806. Exhibits not only detail the known facts of Sacajawea’s life, but also feature the crafts and traditions of the Native peoples who have lived in the region for generations. Each summer, visitors can attend cultural demonstrations and storytelling events. The center’s peaceful outdoor setting will make you want to linger on the marked walking trails or check out what’s growing in the community garden.