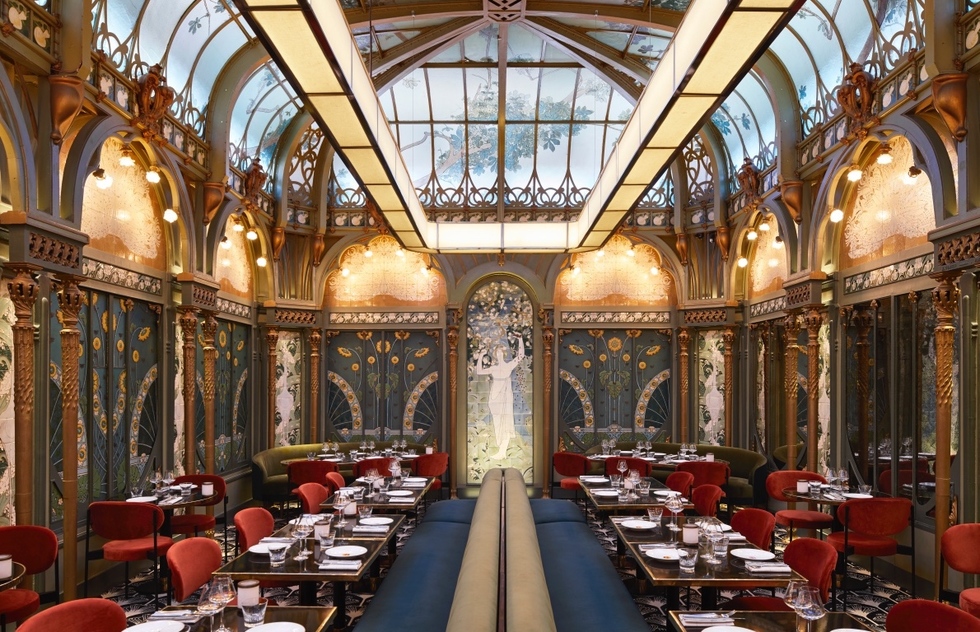 The Most Eye-Popping Art Nouveau Cafes in Paris

There are scores of attractive restaurants in Paris, a city that values beauty more than most others, but few places to eat can outrank the beauty of the Art Nouveau cafes created during the Belle Époque, extending roughly from 1871 to 1914. Rapid technological advances, vast urban projects, and two colossal World’s Fairs inspired many Parisian restaurateurs to transform their bouillons (casual establishments originally serving broth bouillon soup and other simple meals) into grand dining halls suitable for their fashionable new age. Although the intervening years were not always kind to these classic venues, a handful managed to escape brutal renovations and wrecking balls, and several are even playing an exciting role in Paris’ contemporary restaurant scene again today. 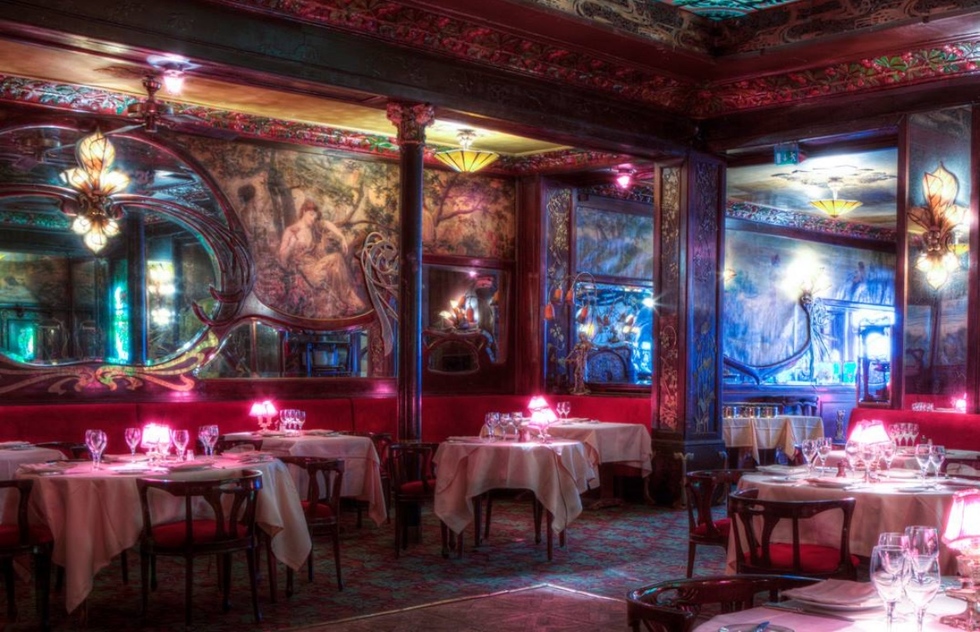 This legendary dining institution isn’t only exemplary of the Art Nouveau style, it was also considered, at its summit, the most famous restaurant in the whole world. Opened in 1893 by former waiter Maxime Gaillard, the interiors were redecorated for the 1900 World’s Fair by its second owner, Eugene Cornuché. To achieve his ambitious project, he called upon the top artists of the famous “Ecole de Nancy,” a group of artists and craftsman from the eastern French city of Nancy. These artistic wizards transformed the space with graceful murals, mirrors set in hand-carved mahogany frames, and curvaceous copper-and-brass decoration. This alluring ambiance, and its atmospheric piano music, quickly made Maxim’s the “in” place to be and be seen. It managed to uphold this notoriety through the 1970s and was a favorite of celebrities including Brigitte Bardot, Aristotle Onassis, Barbra Streisand, and John Travolta. The evenings-only restaurant is now owned by designer Pierre Cardin, and several of its rooms house his personal collection of Art Nouveau decorative arts (viewable on advance reservation). Métro: Concorde 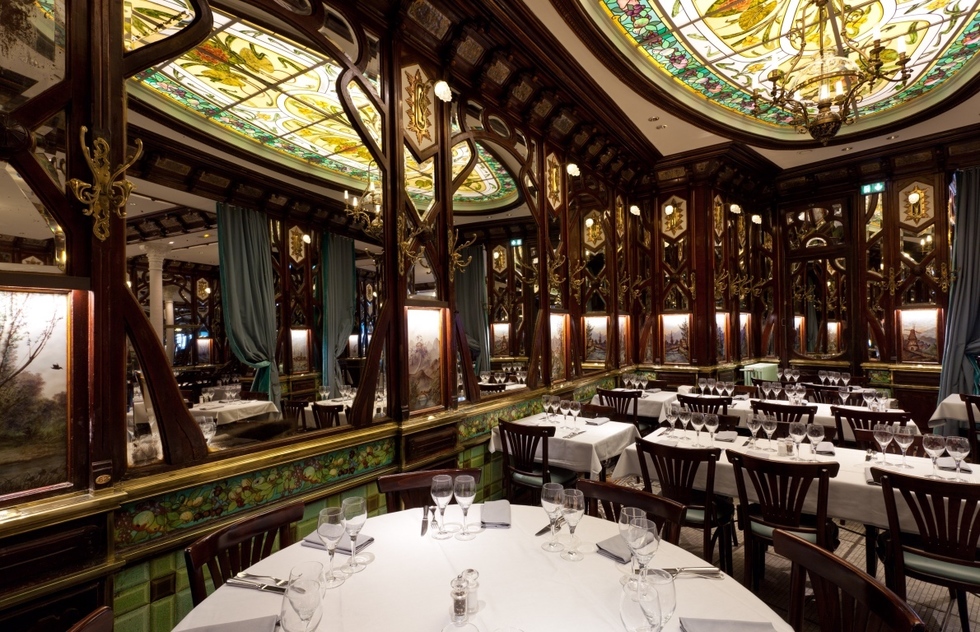 A modern facade on busy Boulevard Saint-Germain hides the second in what would become the Chartier Brothers’ formidable restaurant empire. While their first restaurant, the Bouillon Chartier, still exists, it doesn’t feature the lavish Art Nouveau decor of their other restaurants, like here at Le Vagenende. In 1904, the Chartier brothers successfully converted a 19th-century pastry shop into this stylish eatery, decked out in remarkable Art Nouveau frescos, mirrors, curved wood trim, and bronze coat racks. Sold to the Vagenende family in the 1920s, the historic bistro was saved from being turned into a supermarket in 1966 by French Culture Minister André Malraux. Impeccably restored, it’s been classified as a historic site since 1983. Métro: Mabillon or Odéon 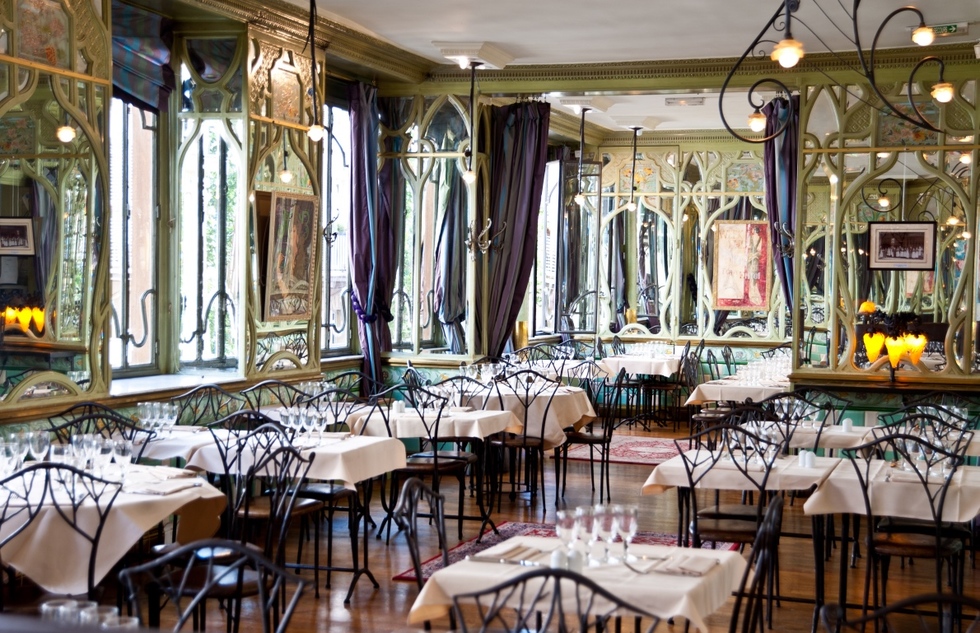 Another conception of the Chartier Brothers, the enchanting Bouillon Racine, from 1906, is tucked away on a quiet side street near the Luxembourg Gardens. An airy feeling prevails thanks to expansive windows, extensive mirrors and tiles, and painted woodwork in the pale green that is so prevalent in Art Nouveau—most recognizably in Hector Guimard’s Métro stations dating from the same era. The bistro’s sparkle gradually faded, and from the 1960s to the 1990s it served as the dining quarters of the staff of the Sorbonne University. It was then plucked from oblivion, restored, and reopened in its current incarnation. Métro: Cluny - La Sorbonne or Saint-Michel Notre-Dame 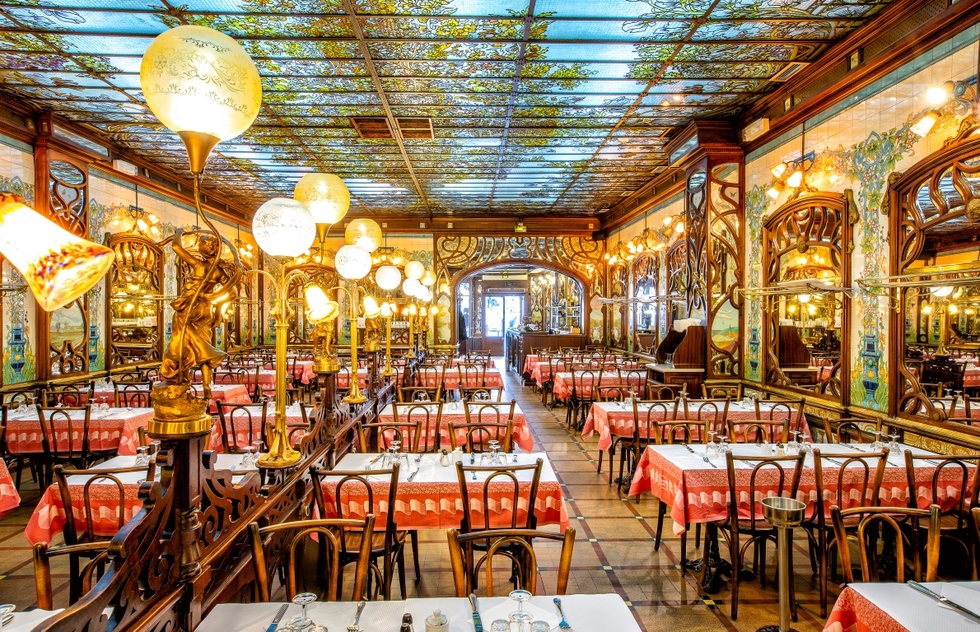 First opened as a plainer place in 1858, this venue was scooped up by Edouard Chartier in 1903. In line with his other rave successes, he went on to give Bouillon Chartier Montparnasse a dramatic Art Nouveau facelift. A well-preserved time capsule, the spacious dining room is adorned with typical era curved mirrors, floral motif tiles, glitzy lighting, and—especially striking—an entire ceiling made of stained glass. After passing through various hands over the course of the 20th century, the restaurant has returned under the Chartier umbrella, reopening as a “bouillon” in early 2019. This is good news from anyone on a budget, as this extravagant feast for the eyes is available at reasonable prices. Métro: Montparnasse - Bienvenüe or Saint-Placide 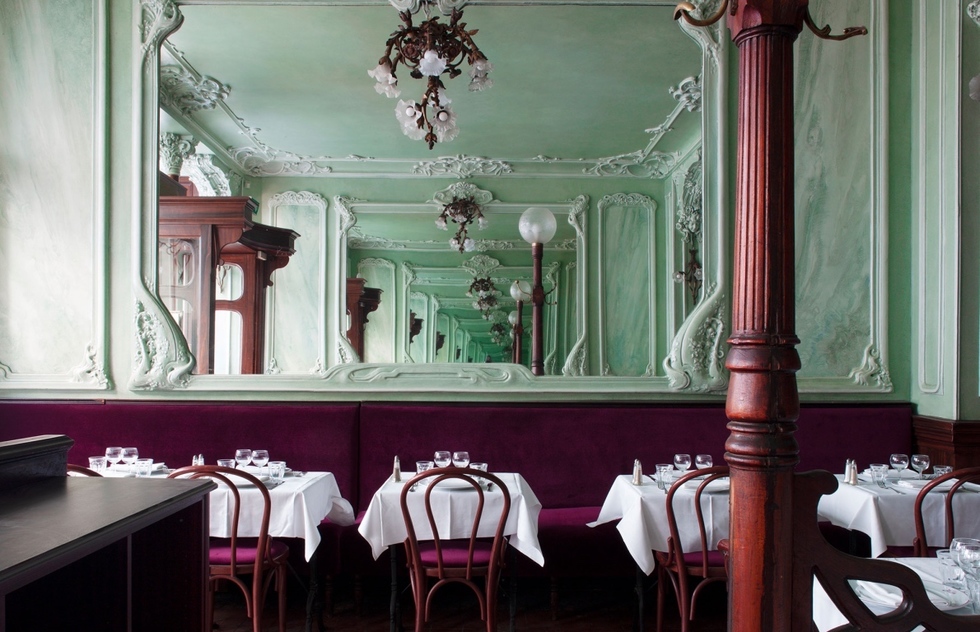 A masterpiece of Parisian Art Nouveau, Bouillon Julien, opened in 1906, was decorated, just like Maxim’s, by the leading artists of the Ecole de Nancy. Their stunning craftsmanship is beautifully expressed in the imposing mahogany bar, unique painted glass panels of the four seasons inspired by the work of Alfons Mucha, and a soaring stained glass ceiling. It’s no wonder Edith Piaf and her lover, champion boxer Marcel Cerdan, liked to rendezvous here (try to book their former table: no. 24). In 2018, the restaurant joined the trend of revamped bouillons, reopening with a refreshed (yet true-to-its-roots) décor and a menu of classic French dishes at bargain prices. Métro: Strasbourg Saint-Denis or Bonne Nouvelle 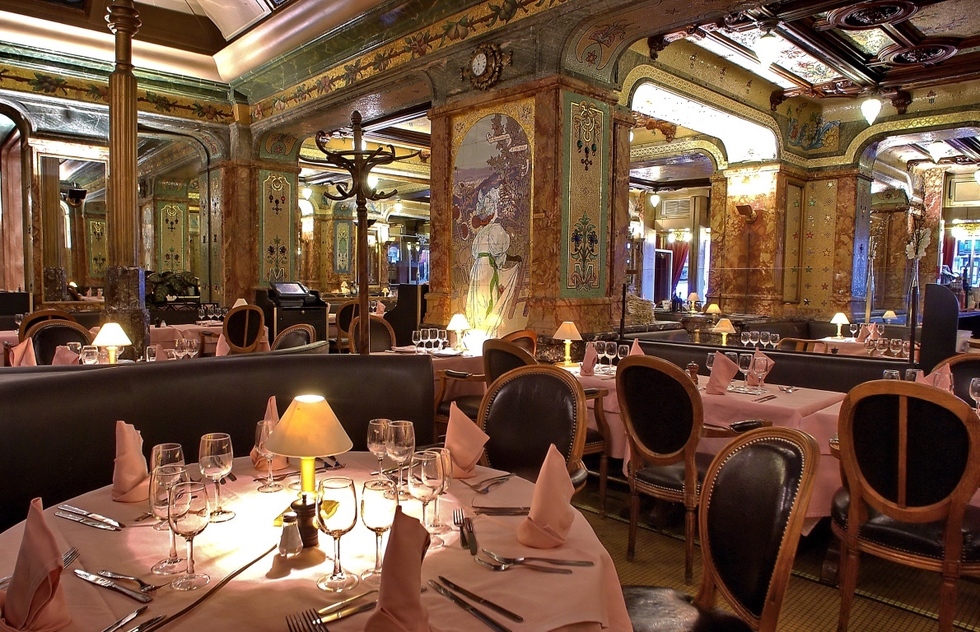 Thirty years after opening a bar in front of the Saint-Lazare train station, the Mollard family had built up enough reserves to expand their business into a large, classy restaurant. The top architect of the Belle Époque, Édouard Niermans, left no corner overlooked in his sumptuous 1895 design, which featured marble columns, gold trimmed mosaics, and tiled scenes of the countryside jaunts that could be taken by train from that station across the street. Deemed old-fashioned with the arrival of Art Deco in the 1920s, paint and mirrors were plastered over these splendid interiors. They lay hidden for almost a half century until a huge restoration in 1965 returned the Mollard to its former glory, a refined ambiance diners can still admire today. Métro: Gare Saint-Lazare 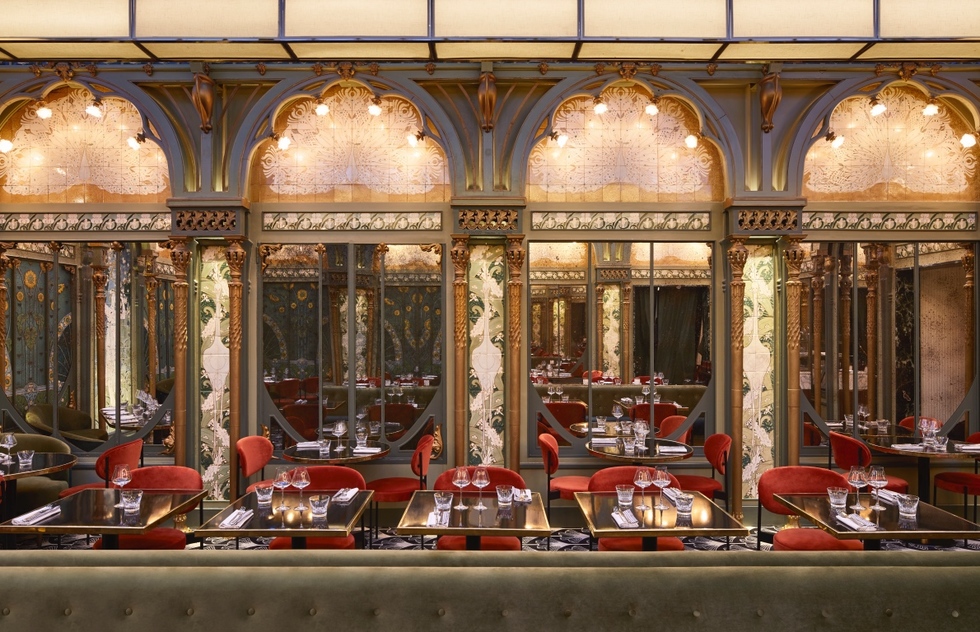 Formerly La Fermette Marbeuf, this veritable Art Nouveau jewel box was bought in 2018 by restaurant mogul Riccardo Giraudi, who converted it into a branch of his high-end, meat-focused brand, Beefbar. Luckily, its original décor was left intact, save a few modern twists. Designed as a “winter garden,” an indoor evocation of summer that was in style at the time, gentle light casts down from its arched stained glass ceiling and onto ceramic walls of blossoming flowers, crawling foliage, dancing dragonflies, and gracious Belle Époque ladies. Beefbar Paris is a simply sublime atmosphere that you can contemplate while slicing into premium Kobe or Black Angus steak. Métro: Alma-Marceau 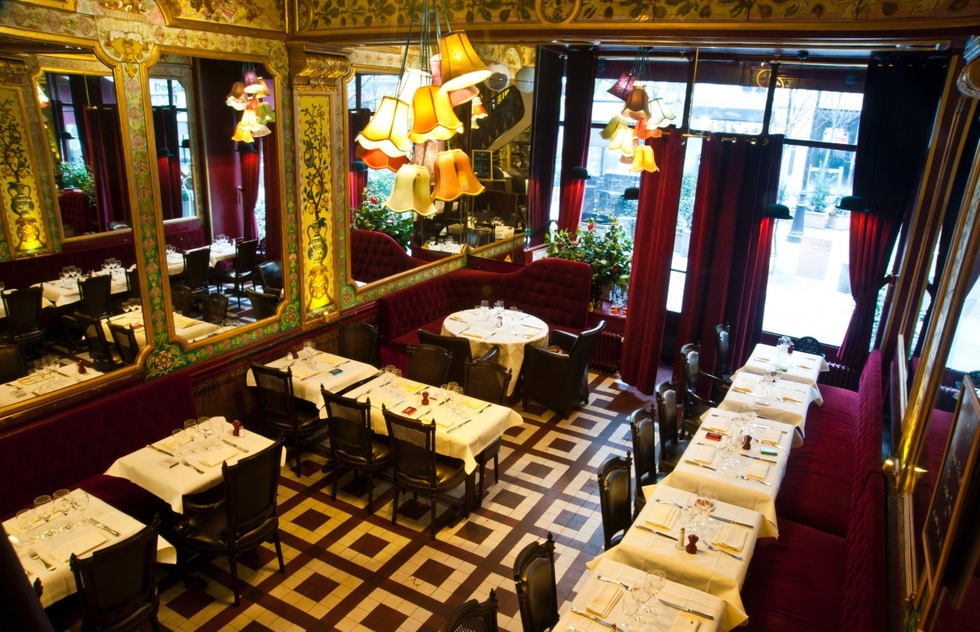 Setting up shop in the vicinity of the Les Halles market in 1832, the Pharamond family moved their restaurant, which specialized in the tripe dishes of their native Normandy, to its current location in 1879. Like many other clever restaurateurs of the era, the Pharamonds refurbished their establishment with the latest styles in the lead-up to the 1900 World’s Fair. Although Petit Bouillon Pharamond has had a number of owners since, its name, gorgeous historic décor, and excellent cuisine have stood the test of time. Amidst the usual Art Nouveau elements such as carved woodwork and painted mirrors, you may also spot some tiles depicting food items and pots of the signature dish. Métro: Étienne Marcel 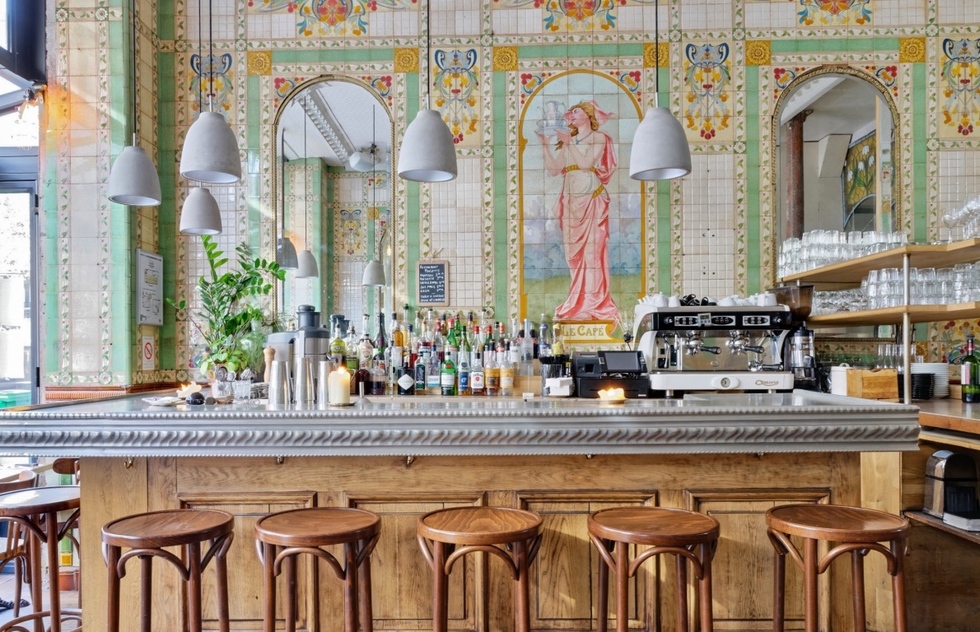 Returning to France after several years in New York and recently in search of a restaurant lease, Mélodie and Antoine Goldschmid knew they’d come across a diamond in the rough when they were shown this space, also in the Les Halles area. A century of grease and grime masked floor-to-ceiling walls of extraordinary Art Nouveau tiles dating back to 1906: artfully winding flowers, curvy urns, and allegories to coffee and beer. The classic zinc bar was also salvaged in the vast refurbishments, completed in 2013. The perfect neighborhood bistro, Poulette has a refreshed look that goes hand-in-hand with a modern, market-based menu, biodynamic wines, and inventive cocktails. Métro: Étienne Marcel