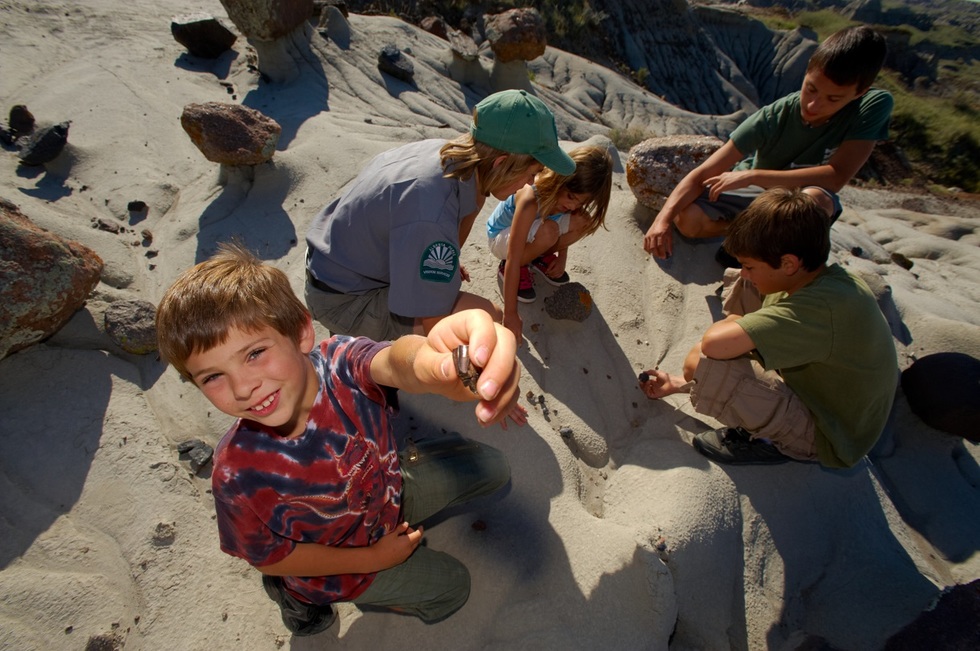 It's a Dino-Safari! The Greatest Dinosaur Attractions for Families

Fierce-looking emissaries from a long-ago world, dinosaurs fascinate kids and adults. Especially the giant ones: A single Barosaurus could nearly fill a basketball court and the heaviest giant, Argentinosaurus, weighed 77 tons, the equivalent heft of 17 African elephants. We know dinosaurs came horned, clawed, winged, crested, fuzzy (yes!), and typically super strong, yet they still remain surrounded in mystery. Curious kids want to know where the creatures lived, how they moved, what they ate, and why they disappeared—and you can make a full vacation out of learning all of it. Bone up on our dinosaur vacation guide for the best dinosaur museums and archeological sites in America and Canada where you and your own hatchlings can sift dirt through your fingers to uncover a Tyrannosaurus rex tooth, ogle ancient skeletons, walk in colossal footprints, and even go on real scientific digs. 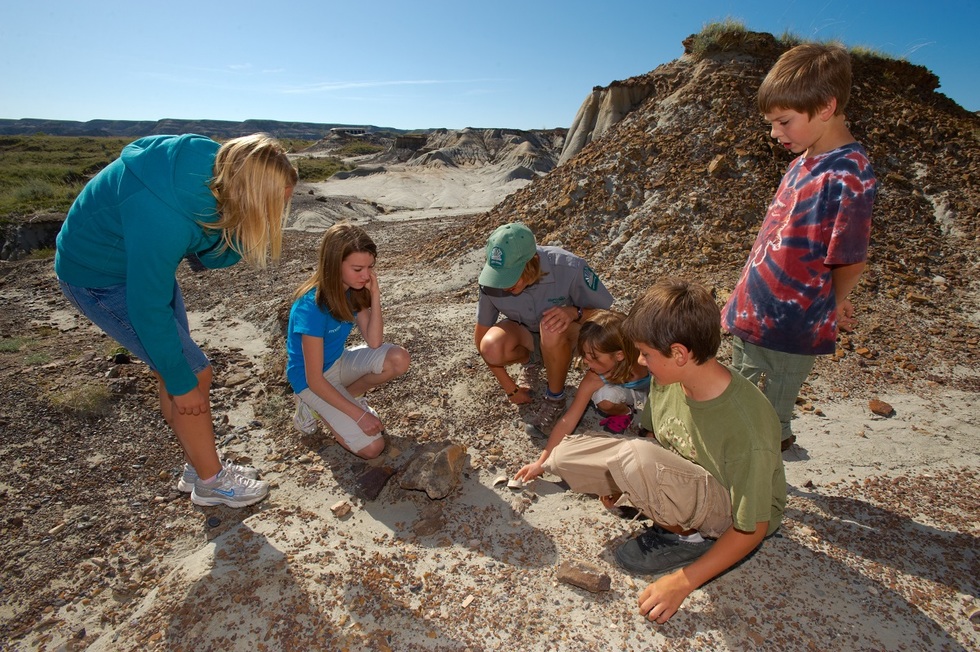 Travel Alberta
Dinosaur Provincial Park, Brooks, Alberta, Canada
It makes sense to search for dinosaurs in the unofficial dinosaur capital of the world, Canada’s province of Alberta. The prehistoric landscape of lush foliage and abundant water supported large numbers of the creatures. After their extinction, subsequent wind and rain eroded the land, bringing eons-old fossils into plain view. At Dinosaur Provincial Park, a UNESCO World Heritage Site and one of the world’s richest fossil grounds, scientists have discovered 44 species dating back 75 million years. Even though the park has self-guided trails, the best way to hunt for evidence is to tour the Natural Preserve, a vast section open only to scientists, guides, and their guests on interpretive outings. On the Fossil Safari, learn how to distinguish a fossil from a rock, tell the difference between tortoise and dinosaur remains, and identify coprolites (a.k.a. dinosaur poop). You can gaze upon hundreds of in-situ bones on the Centrosaurus Quarry Hike, but for a more in-depth experience, sign-up for one-, two-, or three-day digs, open to anyone aged 14 years and older. The park also receives high ratings for its “comfort camping” in tents complete with beds, pillows, electricity, kitchen supplies, and gas barbecues. 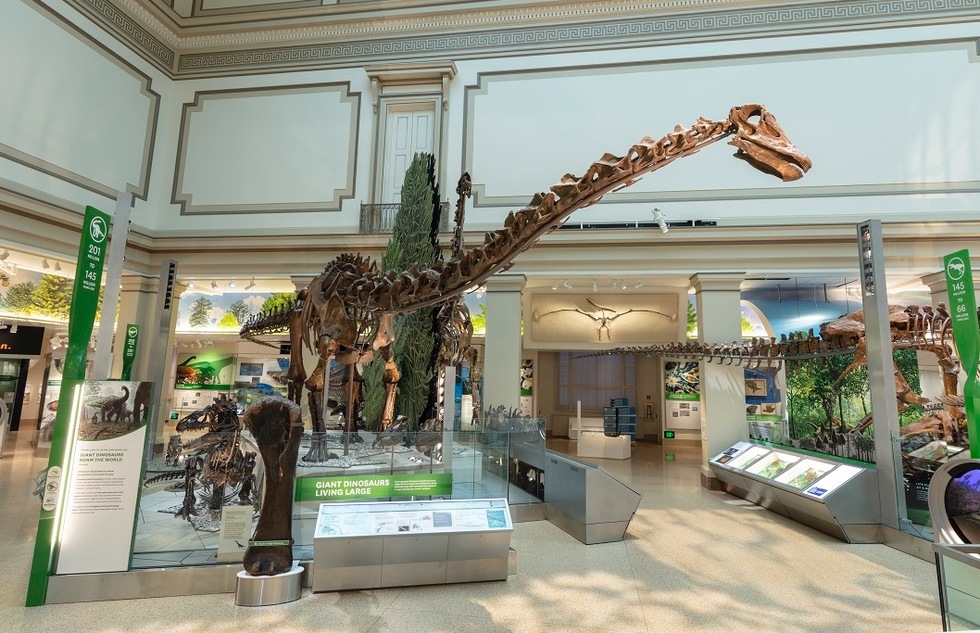 Kids especially like the ferocious Tyrannosaurus rex chomping on a triceratops’ head and a sauropod whose long neck stretches over visitors in the Hall of Fossils—Deep Time, the 31,000-square foot dinosaur and fossil hall that opened June 2019 at the Smithsonian National Museum of Natural History. Starting with a trumpeting mastodon from a recent ice age and figures of early humans, the exhibit time travels backward. Toy-size dioramas at child height help kids envision the long-ago landscapes where dinos roamed. The Smithsonian’s new hall, unlike typical approaches, connects dinosaurs, other fossils, and humans by placing them in the context of “deep time,” the 3.7 billion-year continuum of life on Earth. The science of climate change resulting from both natural and man-made events threads the exhibits together, detailing how eco-systems, habitats, and critters shifted over years. Kids may want to watch scientists clean and prepare specimens at FossiLab and explore Basecamp, a discovery area where tots can put stickers on extinct plants and older children can figure out why elephants’ teeth changed over centuries. Besides learning about dinosaurs and fossils, kids and adults come away with the important message that what humans do now affects all life in the future. 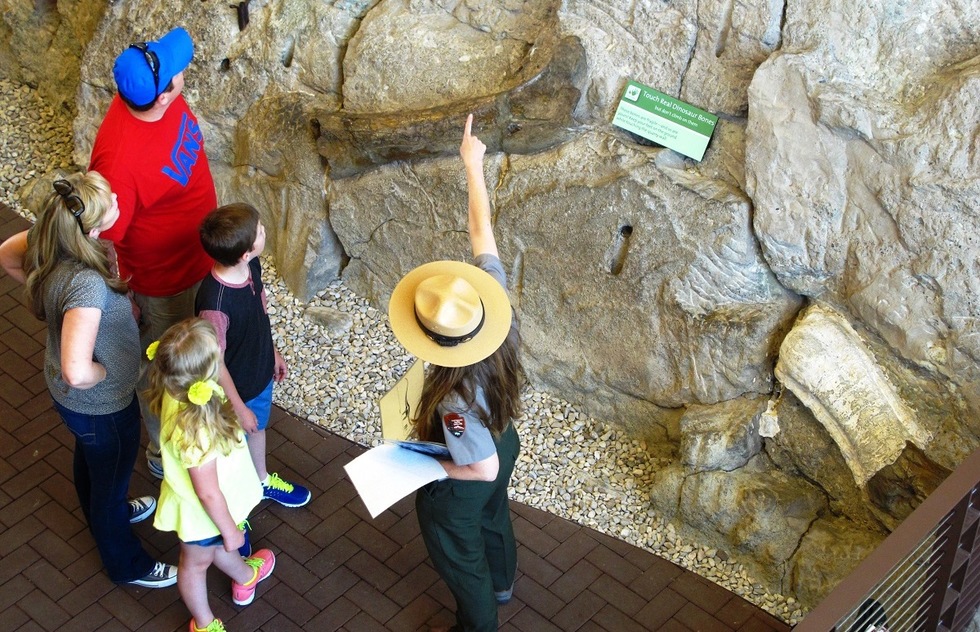 On the border between Colorado and Utah, Dinosaur National Monument’s 210,000 acres preserve rich fossil deposits plus pristine desert, mountain, and canyon landscapes. A trip here combines fossil viewing with scenic hikes, drives, and river rafting. Even though two-thirds of the acreage lies in Colorado, you see more fossils on the Utah side. An indoor wall of 1,500 dinosaur bones (pictured) from Allosaurus, Apatosaurus, Camarasaurus and other late-Jurassic era creatures intrigues viewers at the Quarry Exhibit Hall in Jensen, Utah. Kids can run their fingers along a 150 million-year-old bone and, on a hike of the Utah side’s Fossil Discovery Trail, use their spotting skills to find a sauropod’s leg bone embedded in rocks or to see petroglyphs created by the Fremont Indians. 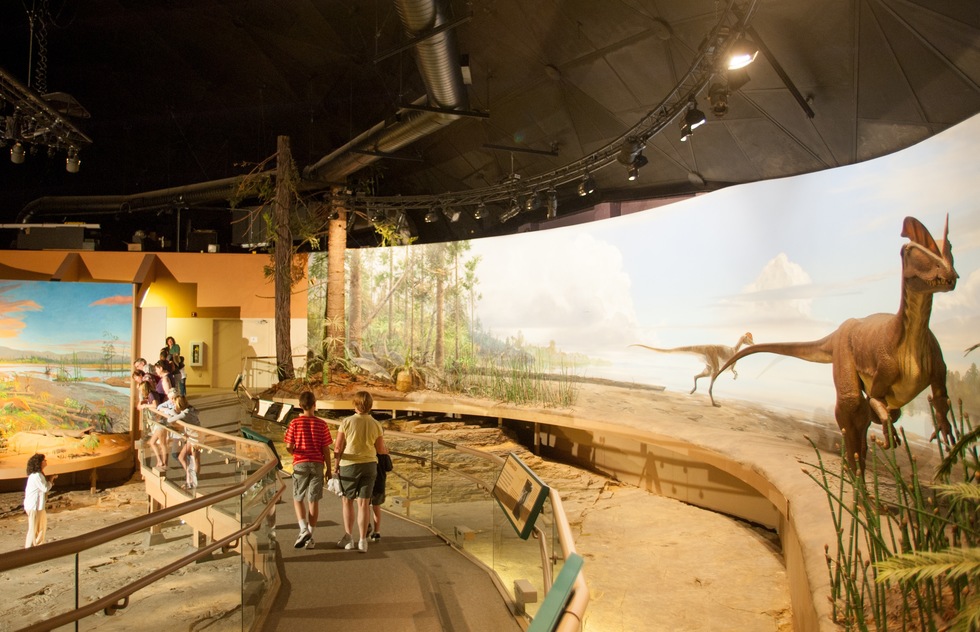 In Connecticut, it's still possible to find footprints of creatures that roamed the region some 200 million years ago. You'll find those tracks, which were discovered in 1966, at Dinosaur State Park, an 80-acre facility that combines an exhibit center and an arboretum. Its indoor trackway is pocked with about 500 three-toed dinosaur prints, allowing kids to imagine the movements of what was likely Dilophosaurus, a two-legged carnivore of the early Jurassic period noted for the double crests on its head (1,500 more footprints were reburied to preserve them for future study). Bring the right ingredients (check the website) and staff will help you make your own cast of a dino footprint to take home. In the dig pit (actually a sandbox stocked with "discoveries"), little ones can brush away sand to reveal their own finds. Two miles of nature trails wind through the park, which flourishes with some 250 species of foliage, many of which were around when the dinosaurs were. 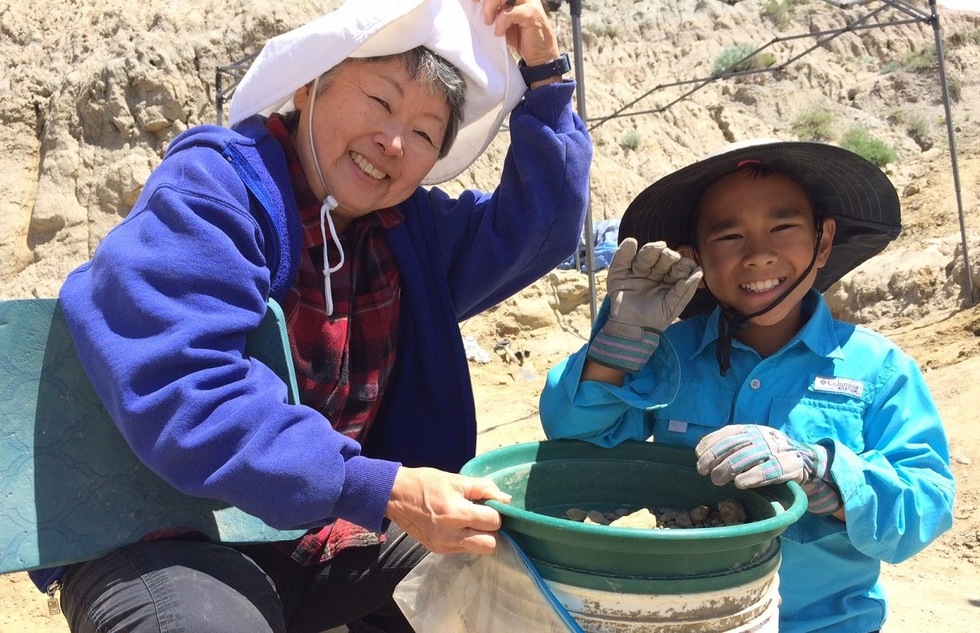 On a PaleoAdventures outing, you can participate in a real dig with children as young as 10—a rarity. After learning proper field techniques and the correct use of tools, you work on private ranch lands in the Northern Black Hills’ Hell Creek Formation, a region rich in fossils of the late Cretaceous era, the period just before the dinosaurs disappeared. You might uncover fragments of some of the last ones to roam the planet. Even more rare: You can pocket any Triceratops teeth, Edmontosaurus bone fragments, and other common fossils you find. Tyrannosaurus rex teeth or other commercial fossils may be purchased, and if you uncover a museum-quality specimen, you'll receive credit as the discoverer in the PaleoAdventures’ logbook, but, alas, no money. Dino adventure tours take place from June through mid-September. It’s best to book months in advance. 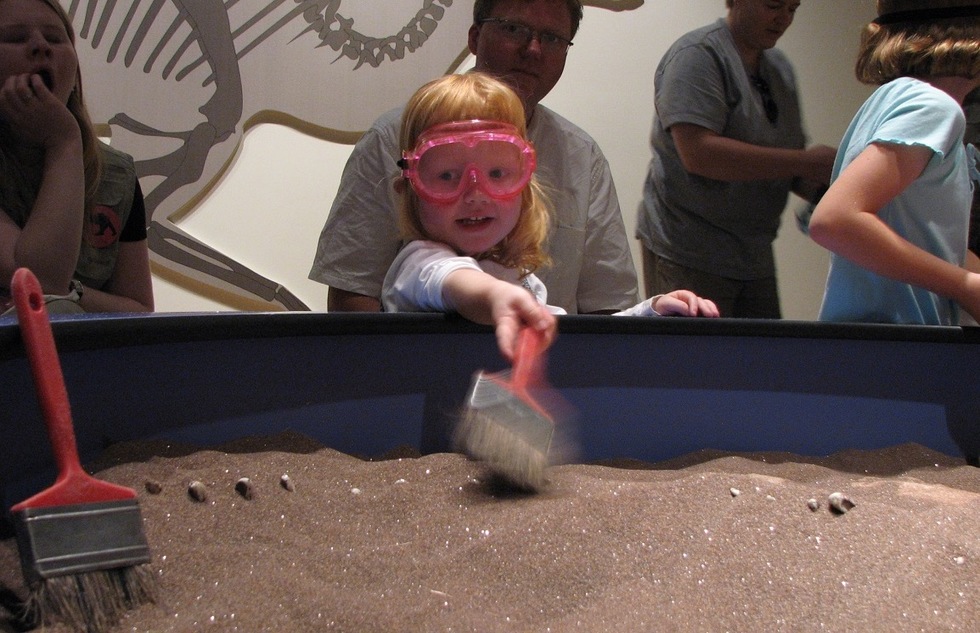 "Gordo" stars in the Royal Ontario Museum’s Galleries of the Age of Dinosaurs. One of only three complete Barosaurus skeletons on display in the world and Canada’s largest mounted actual dinosaur skeleton, Gordo stretches for an impressive 88.5 feet. His long neck and head tower over visitors. Meander past a helmet-crested Corythosaurus, a duck-billed Hadrosaurus, a mighty Tyrannosaurus rex, the heads of Triceratops and a plant-eating ceratopsian, as well as the winged Deinonychus, whose similarities to modern birds inspired the now-accepted theory that they are connected through evolution. At the CIBC Discovery Gallery, little kids dig for replicas of fossils (pictured). Before visiting the ROM, download the free Gallery Trail: Dinosaur Discoveries activity guide to lead kids through the exhibits. 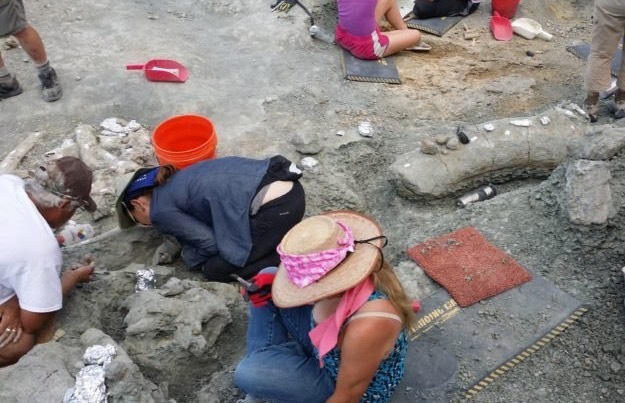 This is the place to team up with serious teens (14 years and older) and college-age progeny for an immersive experience at a real six-day dig. The Judith River Dinosaur Institute’s programs target those studying the creatures as well as bucket-list paleontologists, who make up for their lack of scientific background with passion. Longtime paleontologist Nate Murphy and his team teach the geology of excavating, the correct way to collect data, how to jacket a specimen for safe transport, and other important archeological skills. Diggers rotate among three quarries in the Little Snowy Mountains, about 100 miles north of Billings. Stegosaurus ribs, limbs, and torsos as well as big bones of other Jurassic-era giants have been unearthed at these private ranches. In winter, when the weather makes digging too hard, you go to Billings for four-day sessions of learning how to open fossil jackets, clean bones, and reassemble skeletons in the lab. 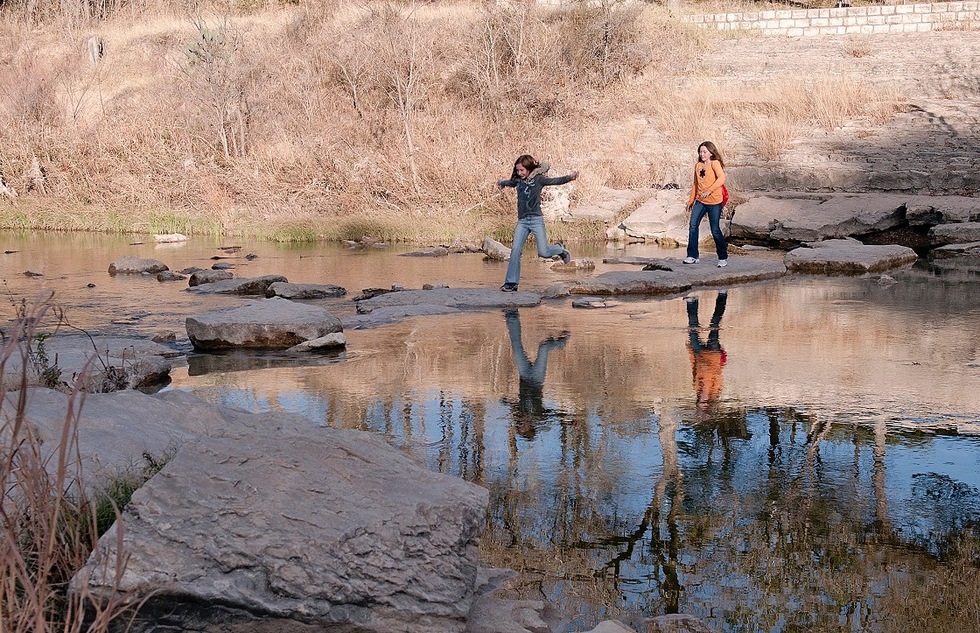 Bring your boots to Dinosaur Valley State Park. That’s because the park’s Paluxy River contains miles of 113 million-year-old sauropod and theropod footprints. When the water level runs low, often in late summer, the tracks pop into view on the riverbank and in the shallow water. (The currents can always be dangerous, so always ask a ranger if it's safe first.) Walking in real dino marks and jumping—or trying to—from one track to another turns a hike in the 1,500 acre park into wondrous time travel. The footsteps, pressed into mud and fossilized, tell a tale. The rounded sauropod prints reveal that the creatures positioned adults on the herd’s flanks and juveniles in the middle, probably for protection. The faster-moving theropods (a group that includes raptors) left three-toed prints. Although you won’t see footprints of Apatosaurus and Tyrannosaurus, you'll meet giant fiberglass versions retired from the 1964-65 New York World’s Fair. The park has more than dinosaur hunting—there's also plenty of fishing, hiking, and picnicking. 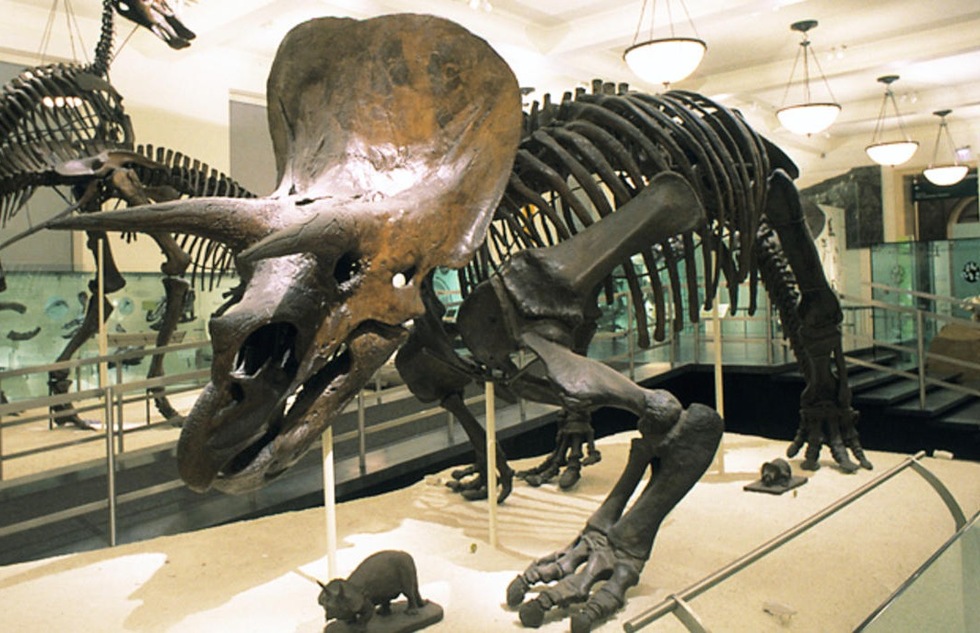 The American Museum of Natural History’s collection of dinosaur fossils is the world’s largest. It's also boldly displayed. In the ticket hall of the Central Park West entrance, the freeze-frame skeleton of a Barosaurus protects its young from an attacking Allosaurus, the world's tallest, freestanding mount of any rearing animal. Most of the other skeletons and specimens live on the fourth floor. Begin in the Orientation Center, where you encounter a gigantic Titanosaur, 19 feet high and 122 feet long. He’s so big that his enormous skull pokes into the hallway. Fierce-looking Stegosaurus, Triceratops (pictured), Tyrannosaurus rex, Apatosaurus, and other major reptiles stare back at you in the Dinosaur Wing’s two halls. Don’t miss the 107-million-year-old Texas trackway (it came from Dinosaur Valley State Park, mentioned earlier) plus the mean-looking Apatosaurus. 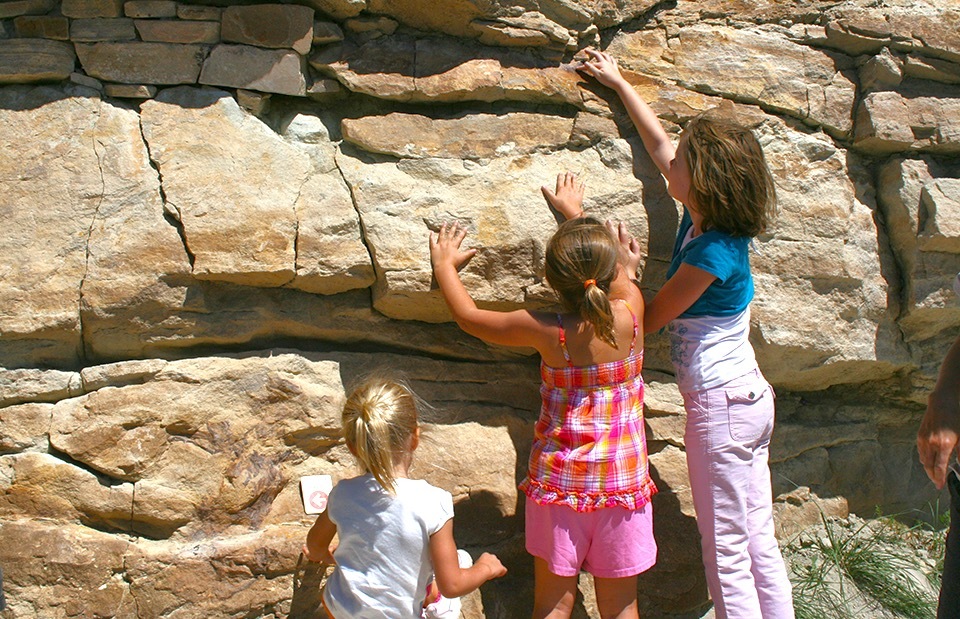 A top-ranked track site 15 miles southwest of Denver, Dinosaur Ridge National Monument’s trails and exhibits appeal to grade-schoolers. The monument is memorable for its segment of a “Dinosaur Freeway” that ran along an ancient inland sea from Boulder, Colorado, to northern New Mexico. On the Dinosaur Ridge Trail, you see more than 300 footprints of Apatosaurus and Allosaurus as well as fossilized bones of other Jurassic-era creatures embedded in rocks. Hike the two-mile round-trip trail on your own for free (beware the bevy of bicyclists) or take a guided bus tour for a few bucks. On the Triceratops Trail, kids discover the three-toed footprints of a Tyrannosaurus as well as the four-toed prints of a Triceratops. Older kids can dig for replica fossils at Backyard Bones, and little ones can push sand around in the Seaway Fossil Box, keeping the shark tooth or shell planted there for them.