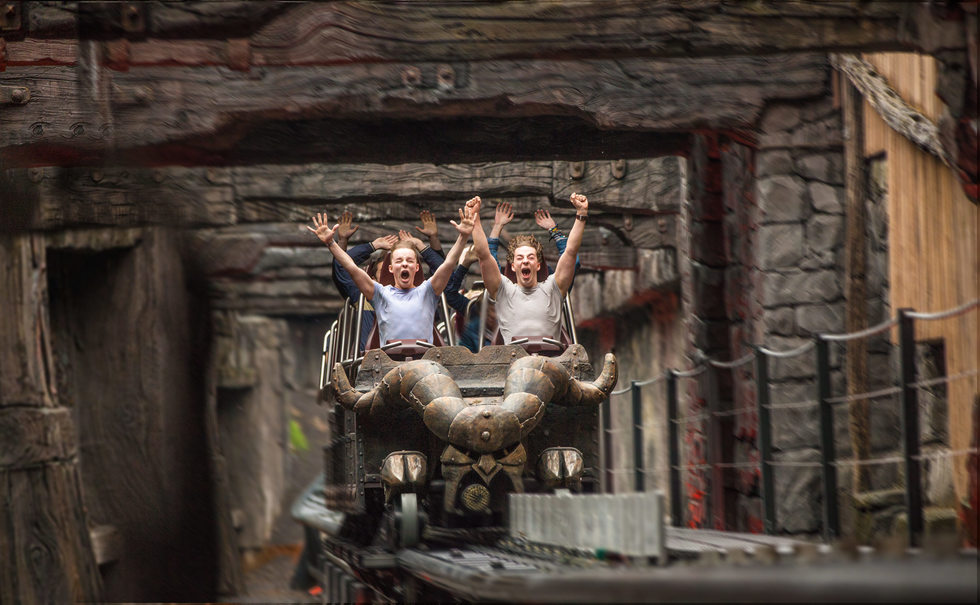 10 Fantastic Roller Coasters You Can Only Find in Germany

By Zachary Laks
A Moulin Rouge-themed roller coaster in the dark. A Star Trek coaster with three launches. Germany loves its roller coasters so much that it's always finding new ways to put a twist on them. In Germany, theme park attendance is second only to Disneyland's French resort, and the thrills go way beyond speed. Calling on the very best European innovation and design, these German coasters push the limits of innovation with world-class theming, high-intensity g-forces, and enough surprises to catch even the most seasoned fanatic off guard. Here are the rails you must ride on your next German adrenaline adventure. 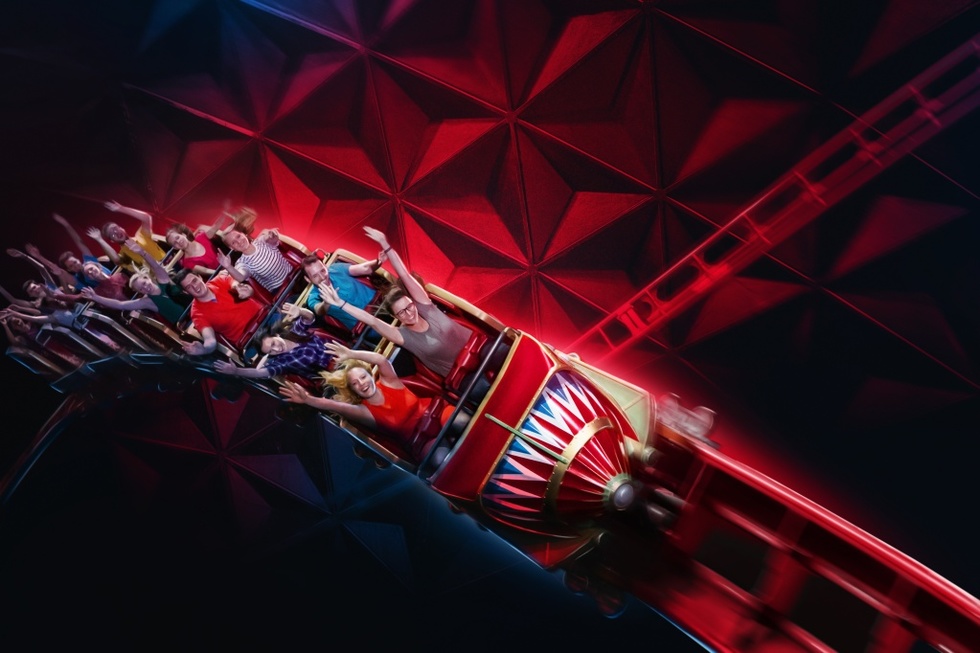 Europa-Park
Eurosat—CanCan Coaster: Europa-Park, Rust, Germany
Yes you can-can! Space Mountain meets Moulin Rouge on Eurosat—CanCan Coaster, Europa-Park’s wildly pleasing dark coaster that ranks among the best theme coasters we’ve ever seen. Originally built in 1989 as a riff on Disney's Space Mountain (its building even looks like the Mouse's Spaceship Earth globe at Epcot), Eurosat was reimagined in late 2018 into the CanCan coaster with an updated track and eye-popping new theme elements. The journey begins with a breathtaking circular ascent up the streets of Montmartre to the top of the Eiffel Tower before racing through vividly rendered black-lit panels of dancing girls and scenes of Paris. This coaster is sensational in all of its offbeat, black-lit splendor.

How to get there: Europa-Park is right near the French border, about an 1:45 drive from Stuttgart and 45 minutes from Strasbourg, France. 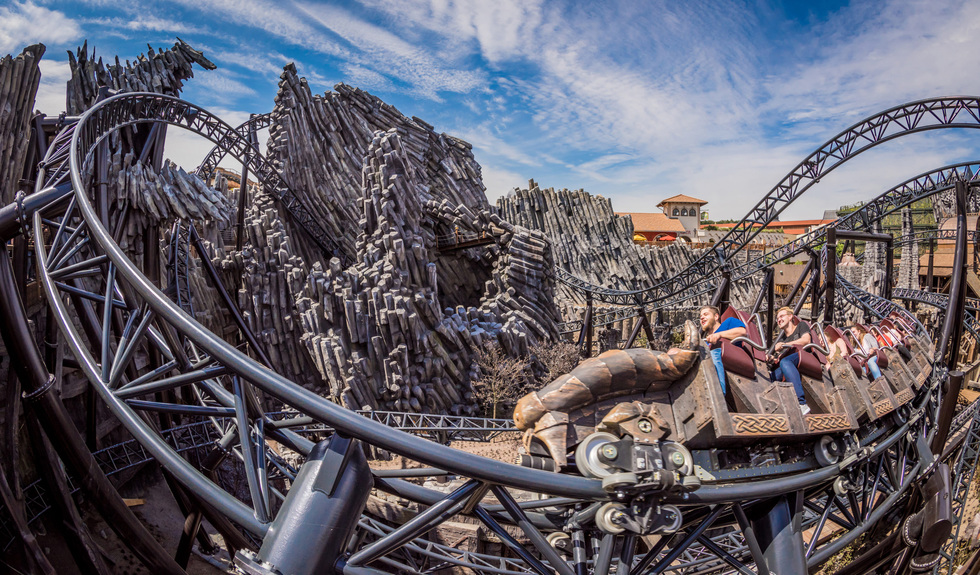 Phantasialand
Taron: Phantasialand, Brühl, Germany
Mix the expertise of Swiss engineering with a seemingly unlimited German budget for aesthetics and you get Taron, Phantasialand’s roller coaster triumph of thrill and theme. Taron was custom-built into a new area of the park called Mystery in 2016, debuting as the world’s fastest and longest multi-launch roller coaster (72 mph/ 116 kph and 4,330 ft/ 1,320 m). The ride has two moments when the train is suddenly propelled to speeds over 72 miles per hour as it races through valleys, darts alongside waterfalls, and crests tall hills for sweeping, if fleeting, views. Perhaps what we love most about the ride is the way it is integrated into the park’s many pathways and bridges. The track snakes throughout a large, man-made quarry, so even if you don’t ride, you still get a multitude of grand panoramas of the track’s splendor from sturdy ground.

How to get there: Phantasialand is a 30-minute drive south from Cologne. 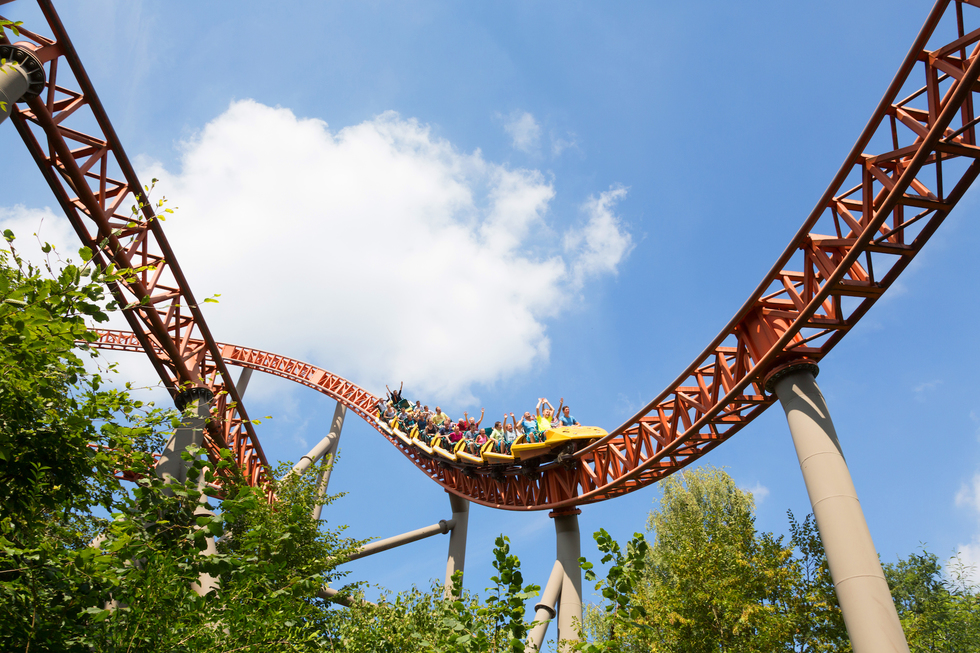 Holiday Park
Expedition GeForce: Holiday Park, Haßloch, Germany
Age cannot wither her! Among the oldest of our favorites, Expedition GeForce at Holiday Park earns its spot on the list for its shear magnitude and stamina. Built by the Swiss company Intamin, one of the world’s most respected coaster designers, in 2001, it remains one of the largest in Europe, reaching up 174 ft (53 m) high and maxing out at speeds of 75 mph (120 kph). Ranked for years by the Golden Ticket Awards as one of the best steel coasters in the world, Expedition GeForce packs an unrelenting ride that never lets up after its initial drop. For those seeking the most airtime—in coaster nut parlance, that’s the feeling of floating momentarily in zero gravity—as the coaster races over hills, sit near the back of the train.
How to get there: Holiday Park is in a remote part of western Germany, driving it should take about 1:10 from Frankfurt and 1:30 from Stuttgart. 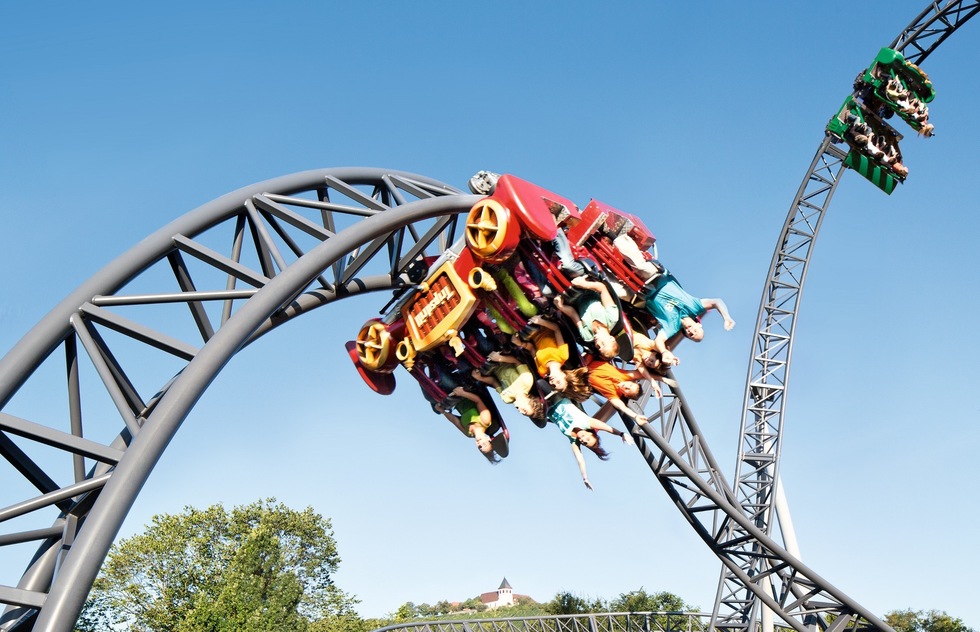 Erlebnispark Tripsdrill
Karacho: Erlebnispark Tripsdrill, Cleebronn, Germany
The chilling darkness of the unknown awaits as you wheel out from the load station of Karacho, Tripsdrill’s most exciting and unexpected German-engineered coaster. What happens next is too good (and too complicated) to spoil here, but let it be known that seconds later, you’re on your way out into open air, hurtling down a track at 56 mph (90 kph). What follows is an intense four inversions—including a dive roll into a cave—and a few hair-raising turns that keep your pulse at max level.
How to get there: Erlebnispark Tripsdrill is in a celebrated wine region of Germany, about 40 minutes north of Stuttgart. 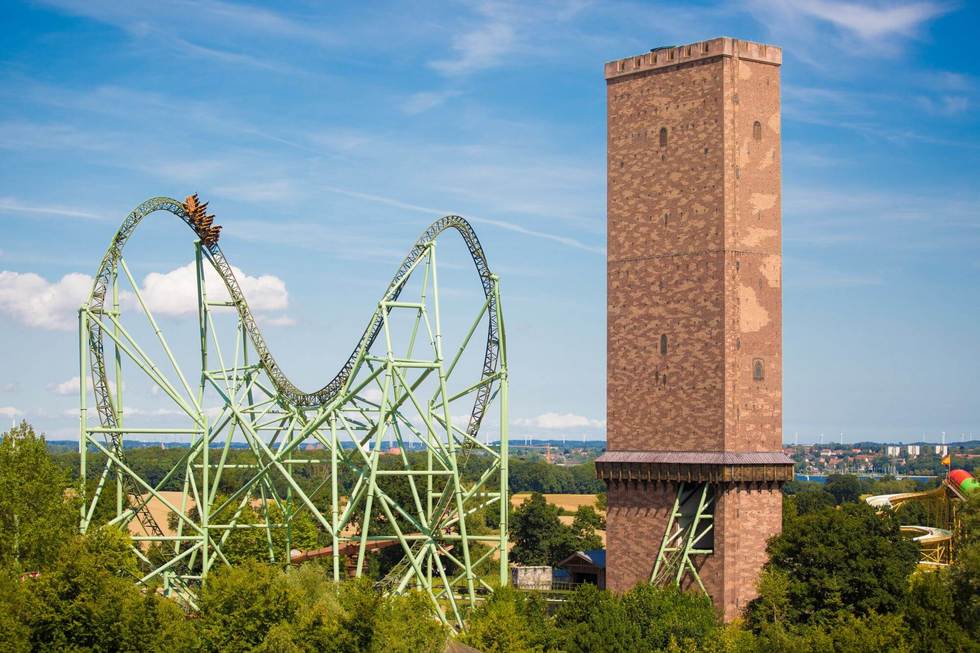 Hansa-Park
The Oath of Kärnan: Hansa-Park, Sierksdorf, Germany
Carrying the banner as the only full-circuit hypercoaster with an inversion in Europe, The Oath of Kärnan in Hansa-Park is a powerful, beautifully-themed coaster with a shocking surprise. If you’re one to appreciate the glory of riding a coaster with no clue of what happens next, skip this next sentence: What is so miraculous about this coaster is that it tricks the rider into believing the trains are about to go over a traditional hill, only to unexpectedly plunge the train backward in a 196-foot (60-m) free-fall. It’s unlike anything we’ve ever felt and will genuinely terrify and amaze the most seasoned coaster fans.
How to get there: Hansa-Park is right on the coast of the Baltic Sea, about an hour drive north of Hamburg. 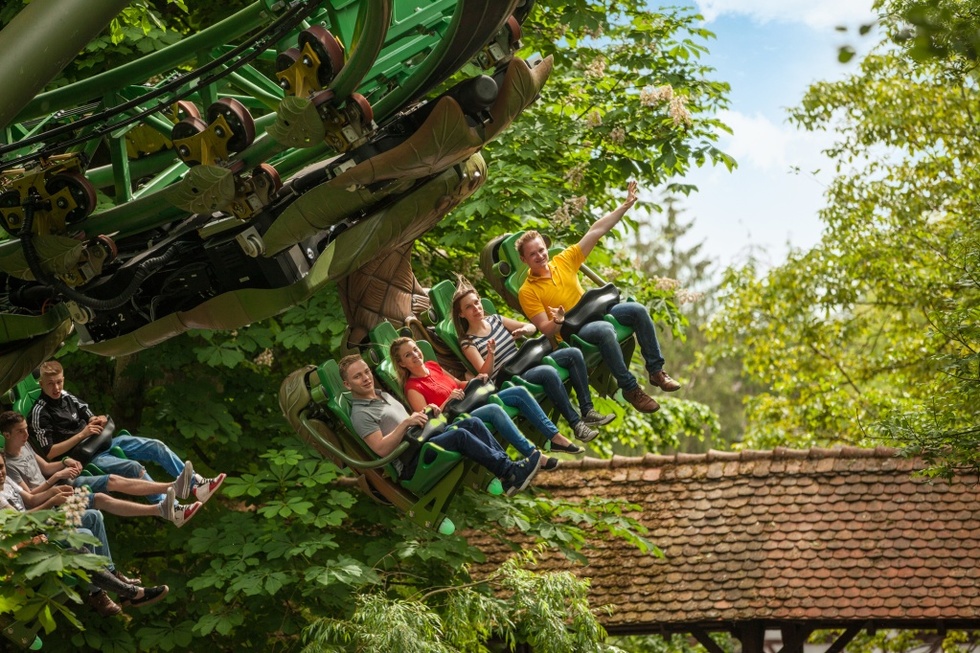 Europa-Park
Arthur—The Ride: Europa-Park, Rust, Germany
Competing with Disney and Universal to deliver the ultimate themed coaster, Arthur, the second great ride on our list at Europa-Park, is a triumph of storytelling. Custom-built in its own terrarium world in 2014, Arthur is an inverted-spinning coaster in the dark that cost the park an estimated €25 million. Lush, detailed sets and a playfully fast self-propelled train glide smoothly throughout the highlights of the Arthur book and film series (largely unknown in the United States) by French director and writer Luc Besson. Although all of the rows have an equal view of the action, wait for the front row for the best glimpse of the gorgeous neon-lit city scene.

How to get there: Europa-Park is right near the French border, about an 1:45 drive from Stuttgart and 45 minutes from Strasbourg, France. 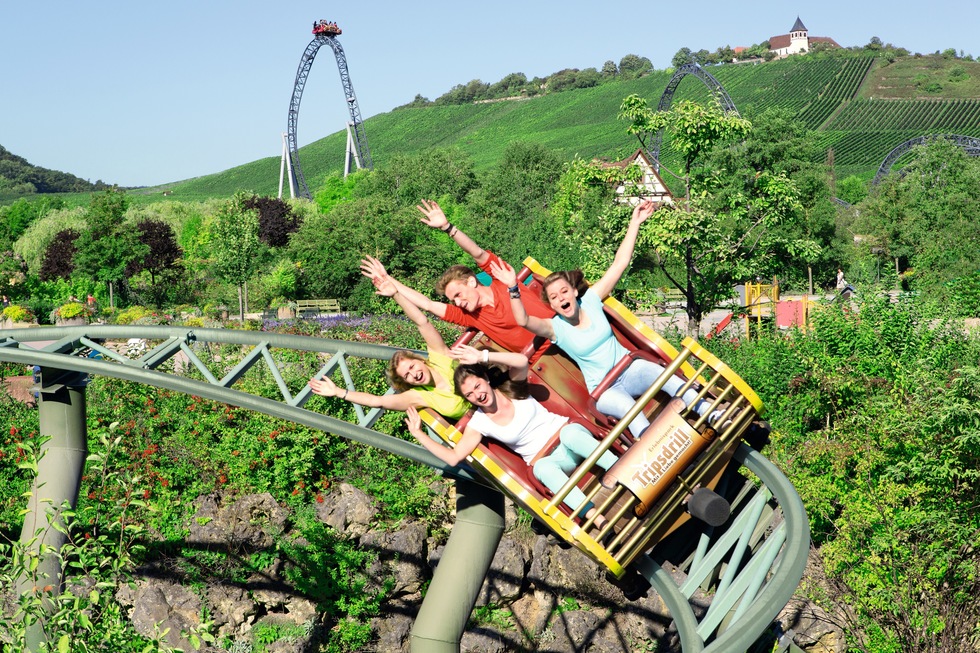 Erlebnispark Tripsdrill
G’sengte Sau: Erlebnispark Tripsdrill, Cleebronn, Germany
First impressions may tempt you to dismiss this wild mouse coaster as a timid family ride without enough thrills to warrant a 20-plus minute wait. There’s much more than meets the eye on this surprising coaster that traverses through Tripsdrill’s idyllic countryside. Every ride at Tripsdrill (including Kamacho, from earlier on our list) delights with a few unexpected twists, and G’sengte Sau has one of the best. Deviating far from the tired standard-issue wild mouse track, this speedy coaster zips along tight turns, hits banked curves fast, and finishes with some bunny hills through a garden, maximixing airtime and fresh air.

How to get there: Erlebnispark Tripsdrill is in a celebrated wine region of Germany, about 40 minutes north of Stuttgart. 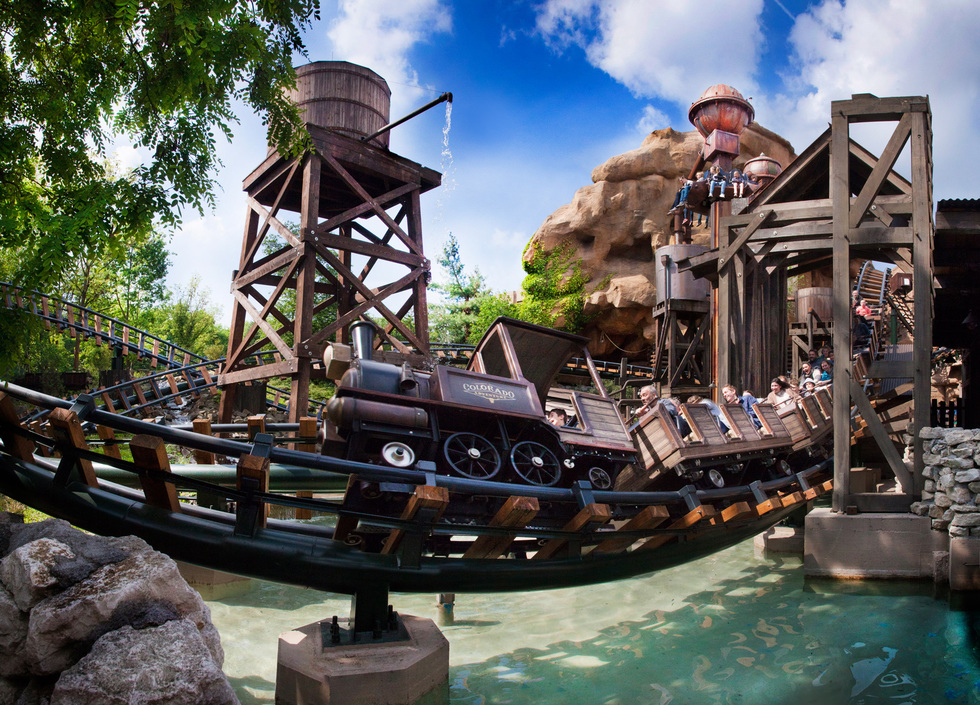 Phantasialand
Colorado Adventure: Phantasialand, Brühl, Germany
Phantasialand’s Colorado Adventure consistently ranks with coaster enthusiasts as one the best mine trains in the world, and there’s no wonder why with its scrambling, nearly three-minute course. Across three lift hills, the ride’s elongated trains clip through pitch-black tunnels, tight helixes, and a few unsuspecting drops. There’s often a wait to ride in the front of the train, which features a cute mine cart-like enclosure, but the real thrills are in the very back, where every pull and twist is amplified the most.

How to get there: Phantasialand is a 30-minute drive south from Cologne. 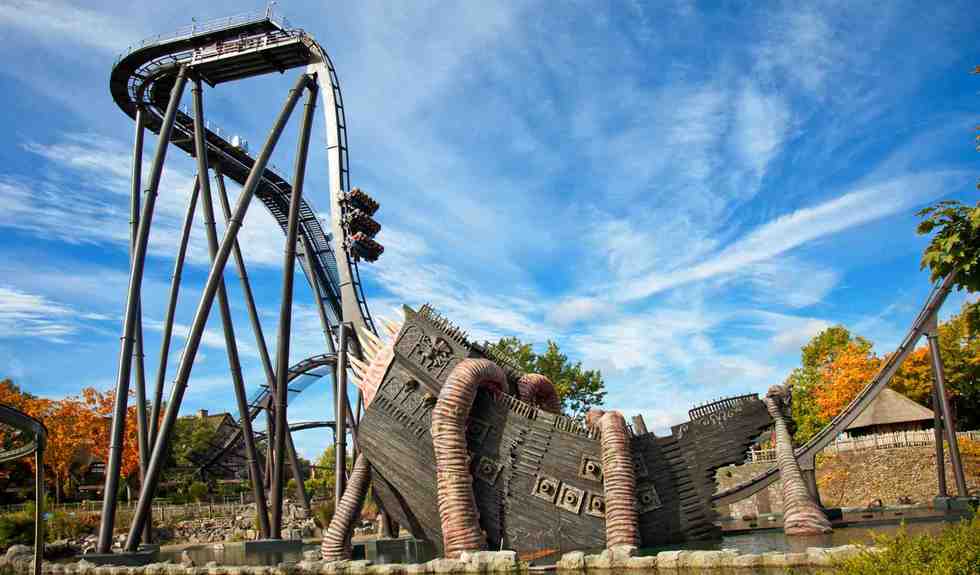 Heide Park Resort
Krake: Heide Park Resort, Soltau, Germany
Krake at Heide Park Resort is the first dive coaster of its kind in Germany—and it’s all about that intense first drop. Dangling from 135 feet for a few seconds of suspense, the train then hurdles down into the terrifying mouth of a monster octopus. What follows is a splashdown effect, where the back of the train propels water into the air, though all riders remain dry. The coaster reaches speeds of 64 mph (102 kph) with a ride time of just under two minutes.
How to get there: Heide Park Resort is a 45-minute drive south from Hamburg. 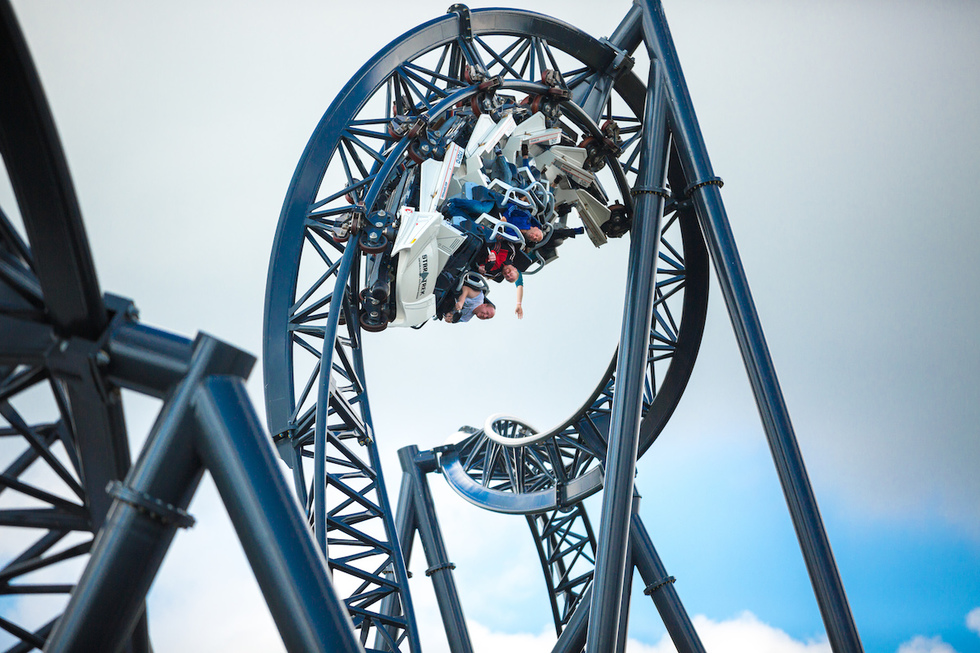 Trifonneke
Star Trek—Operation Enterprise: Movie Park Germany, Bottrop, Germany
The coaster, at Movie Park Germany, ranks high on fanatics' bucket lists for its unique launches, fun theming, and smooth motions. Nominally themed to the Star Trek franchise, Star Trek—Operation Enterprise, is a state-of-the-art design that debuted in 2017. The steel launch coaster begins with a subdued vault forward before lurching backward, only to return again for a third launch over a top hat (a steep hill shaped like an upside-down U) and into a knotty course of inversions and helixes.

How to get there: Movie Park Germany is a 45 minute northeast drive from Düsseldorf.
Family & Kids
Local Experiences
Theme Park