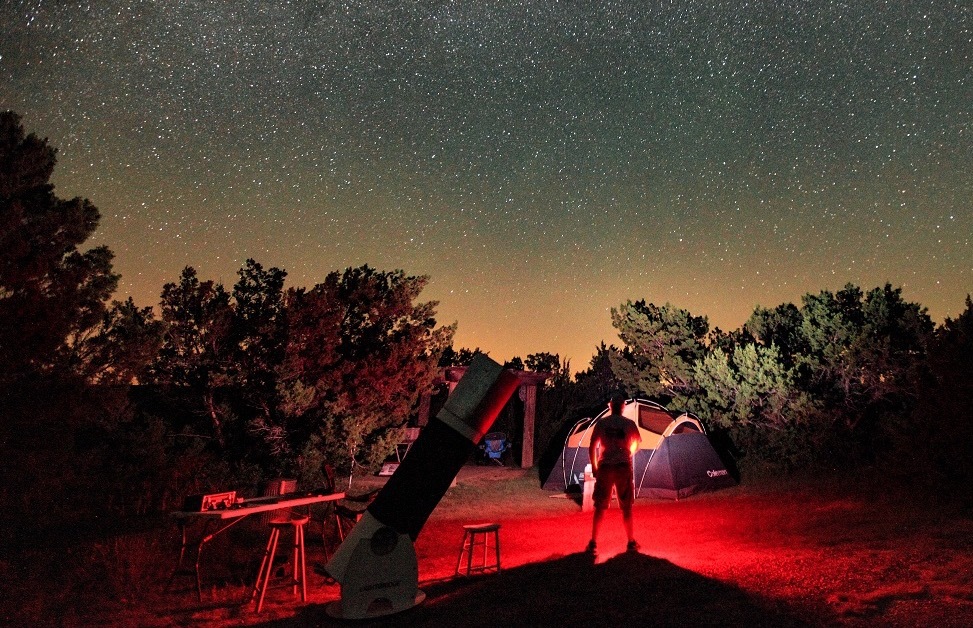 Where to Stargaze: Dark Sky Parks in the U.S. and Europe

By Candyce H. Stapen, Family Travel Expert
Look up at the dazzling display of thousands of stars at a dark sky park and you know why the night heavens inspired legends. These days most people can only view constellations and planets on their computer screens because urban light pollution drowns out starlight where they live. Experts estimate that some 80% of Americans can no longer see the Milky Way from their homes. But there are still places where amateur astronomers can soak in the sight of a sky full of celestial bodies. The International Dark Sky Association has honored dozens of places worldwide as dark sky havens. At these sanctuaries far from man-made light, stars glow, planets appear, and the Milky Way shimmers, silhouetted by bright nebulae. The astounding spectacle costs little to view since admission fees are low and most parks are near family-friendly attractions and within hours of urban areas. At the following 10 U.S. and European in U.S. national and state parks as well as similar areas in Europe, you—and your kids, if you have any—will share a sense of wonder.
For best viewing, plan your visit for a moonless night and hope for few or no clouds. Arrive before dark to acclimate to the darkness, and navigate using only flashlights equipped with red filters that don’t impede astronomical viewing. Much of what’s to see is visible with your naked eye, but there’s even more with binoculars, and most of all if you join the sites’ telescope viewings.

For Frommer's' picks for the best stargazing in Canada, read our feature about that. 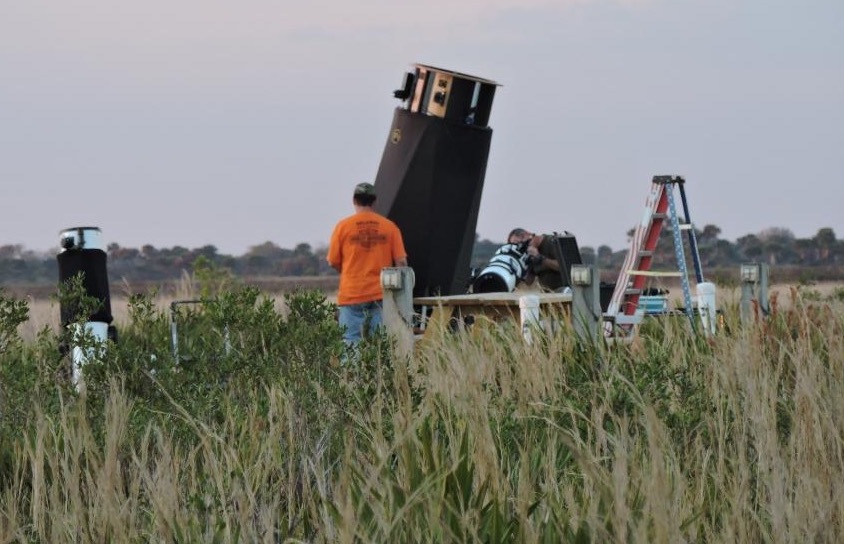 Shirley Palmer
Kissimmee Prairie Preserve State Park, Florida
Add the excitement of viewing the brilliant night sky at Kissimmee Prairie Preserve State Park to your Orlando vacation. Not actually in the town of Kissimmee but 110 miles southeast of the theme park mecca, the 54,000-acre preserve protects the largest remaining dry prairie in Florida. To be starstruck, you must stay overnight at the campgrounds since the park closes to outsiders at sunset. The reward: Seeing thousands of stars as well as Saturn, Jupiter and, possibly, the International Space Station as it orbits the Earth. If you're toting a telescope, reserve a spot on the park’s astronomy pad (pictured). During the day, you can explore Kissimmee Prairie's grassy plains: Dune buggy trips are typically available weekends November through March, which are prime months to visit since the temperature and humidity remain relatively low. 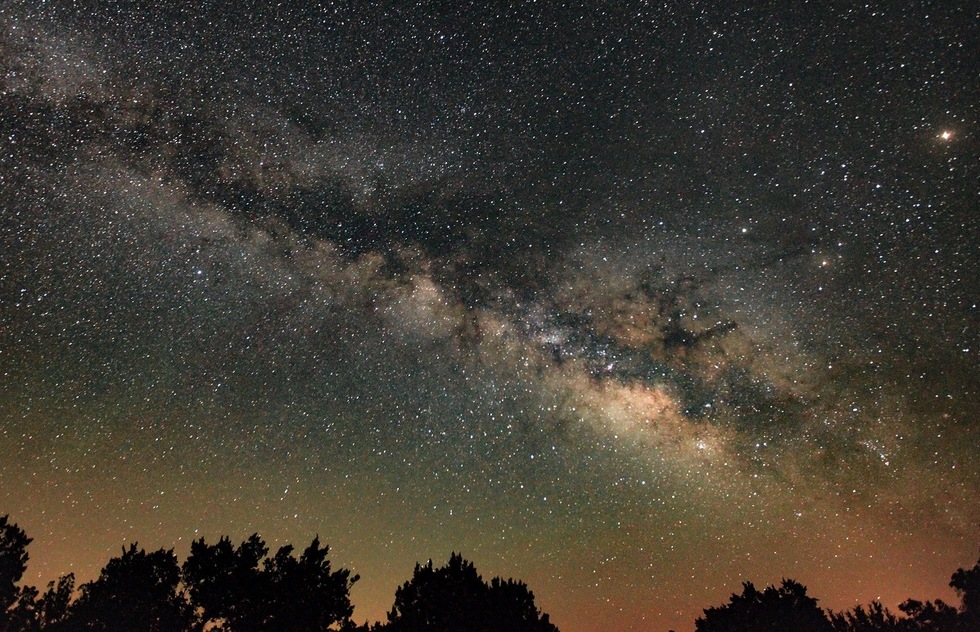 Chris Emory
Copper Breaks State Park, Texas
At storytelling time at Copper Breaks State Park, rangers and astronomers spin yarns about the constellations and their significance to the Comanche and Kiowa Native Americans, former inhabitants of the land. Monthly telescope viewing sessions (April through October) bring the stars, planets, and distant galaxies into focus. Learn to walk by starlight on ranger-led night hikes and discover sunspots and flares on the Sun, our closest star, during guided daytime programs. Since the park closes at 10pm, after the sun sets, even day visitors can sample the dark sky. For the full dark sky experience, spend the night at a campground. The park has lake fishing and boating, but for a full Texas welcome, hoof it over to the herd of longhorns that call the place home. 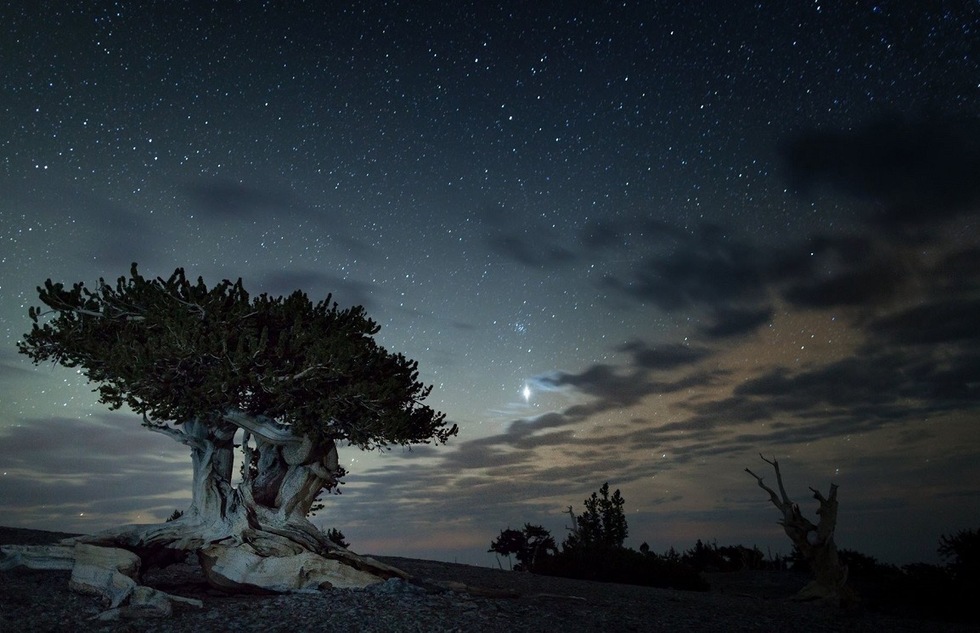 National Park Service
Great Basin National Park, Nevada
Great Basin National Park’s skies rate among the darkest in the lower 48 U.S. states—mountains block skyglow from distant large cities. At ranger programs held April through October, months with the mildest weather, learn about how space bends light, how the sun and stars influenced societies, and how galaxies formed. Afterward, view the night sky through the park's high-powered telescopes. If you only have your eyes, good spots for viewing the evening spectacle include Baker Archeological site, Mather Outlook, and Stella Lake, which requires a hike to reach. Families with young kids might like to ride the Northern Nevada Railway’s Star Train round-trip from Ely, Nevada. Although the train covers territory outside the park, rangers come aboard to discuss the stars you'll be seeing. Tired kids can curl up and sleep in the seats on the ride back. In September, the park often hosts an astronomy festival with more talks and telescopes. Additional park attractions: lakes, limestone caverns, and trees that are some of the oldest-living on Earth. 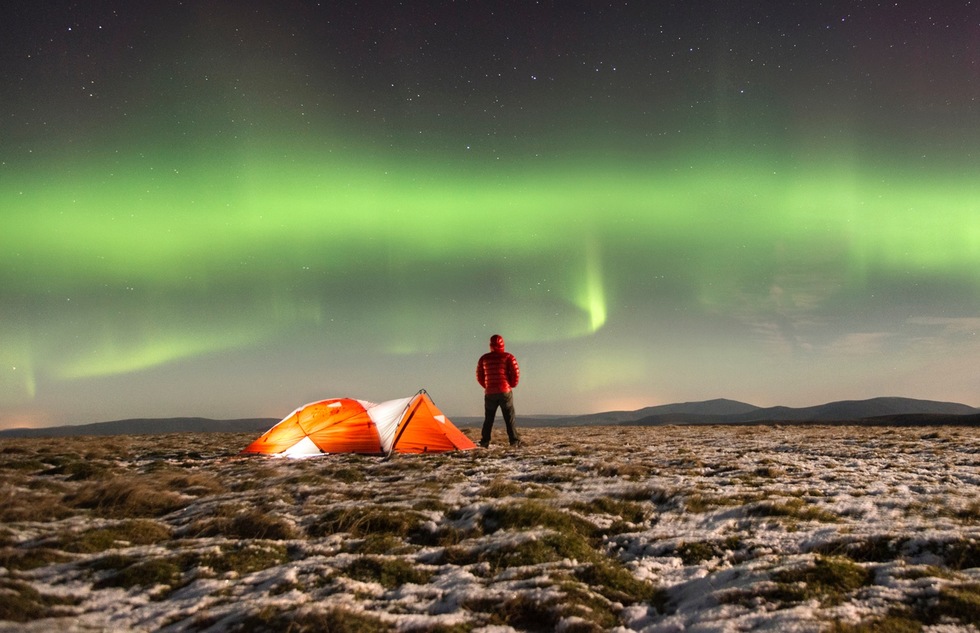 Myrddin Irwin
Tomintoul and Glenlivet-Cairngorms International Dark Sky Park, Scotland
The world’s most northerly dark spy sanctuary, Tomintoul and Glenlivet-Cairngorms International Dark Sky Park, situated in the northern Scottish Highlands, comes with a resident herd of reindeer and two whisky distilleries—Tomintoul and Glenlivet—open for tours and tastings. Bundle up the kids, because the best stargazing here takes place during the darker winter months, October through March. That’s also when the purple, yellow, and green bands of the Aurora Borealis (the Northern Lights) ribbon the sky. The park hosts monthly telescope viewings August through April as well as special events year-round to view planets and galaxies. Time your visit to coincide with a predicted meteor shower and get the bonus of watching shooting stars streak through the heavens. Three Dark Sky Discovery sites located near roads (you can use a rental car), make it easy for wide-eyed children and parents to take in the wonders and still get back to town for bed (the nearest big city is Inverness). 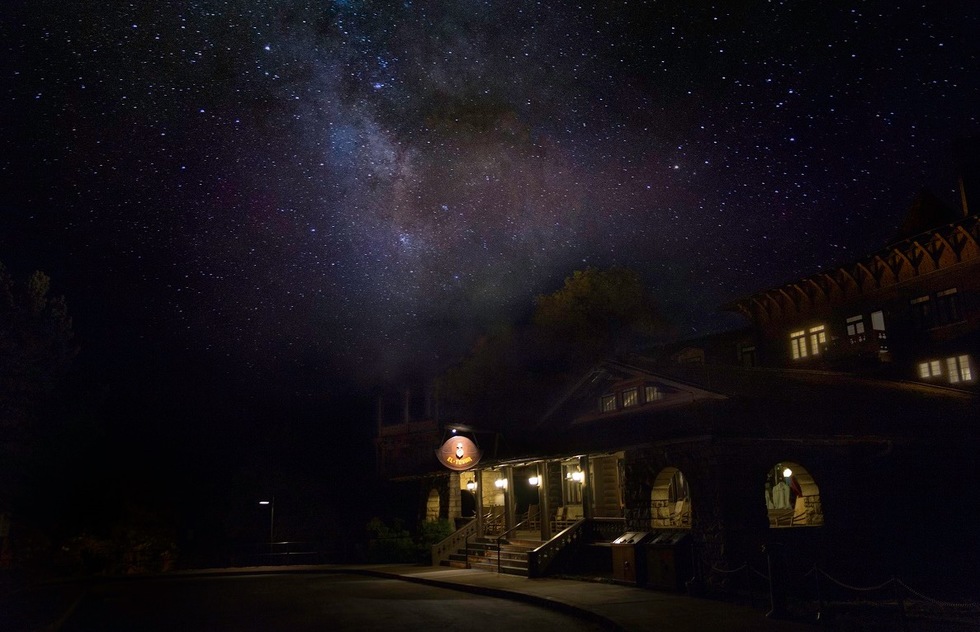 Xanterra Travel Collection
Grand Canyon National Park, Arizona
Grand Canyon National Park’s slogan “half the park is after dark” reminds you that the natural wonders continue after sunset. On day and afternoon hikes and walks, you see the sunlit rock walls change from morning’s oranges to dusk’s deep blues and purples. At night, walk a few yards from the lodges (pictured), which keep lights low, and look up. On clear evenings, the Milky Way glitters like a spray of diamonds. Yavapai Point and Lipan Point are two easy-to-access star-gazing spots along the South Rim, which remains open year-round. Among the U. S.’s newest dark sky parks, Grand Canyon received its Dark Sky Designation from the IDSA in June 2019. Summer brings ranger-led star walks and a Star Party (typically in June), when astronomers set up high-powered telescopes and talk about the planets, constellations, and other cosmic wonders. 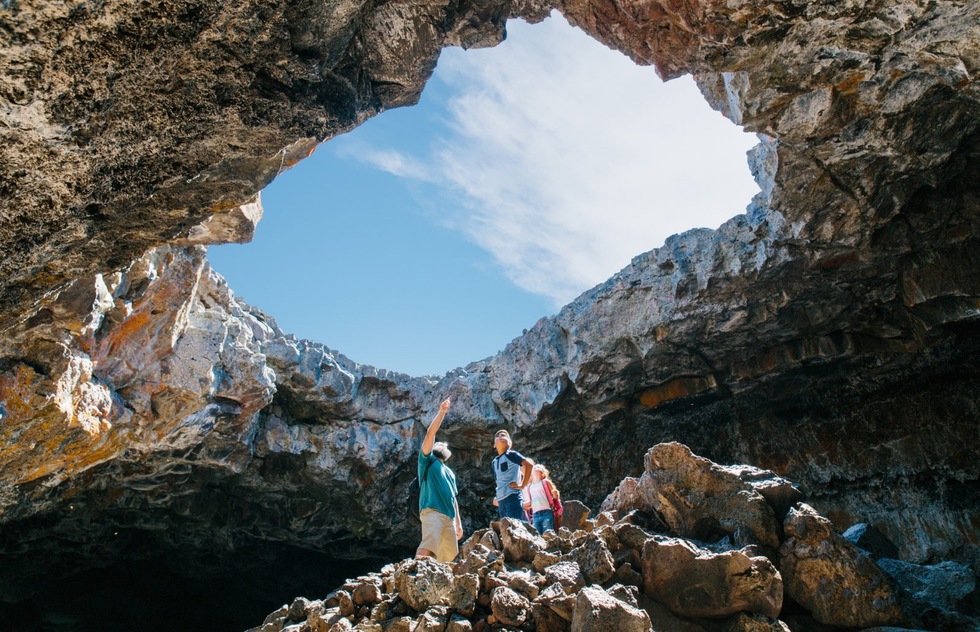 Idaho Tourism
Craters of the Moon National Monument and Preserve, Idaho
Cinder cones, lava rock, and snaking swaths of ash, all results of volcanic eruptions, distinguish Craters of the Moon National Monument and Preserve near Arco. The preserve contains 53,500 acres of lava rocks and volcanic formations (pictured), a rugged landscape that suggests the Moon. Get a close encounter with the planets and the Milky Way at ranger-led night sky viewings on summer Friday nights and at Star Parties (in the spring and fall), when members of the Idaho Falls Astronomical Society set up telescopes. During the day, walk to lava tubes, ascend ash hills, climb craters, and discover caves. Many of of its sights can be accessed by relatively moderate hikes from the 7-mile Loop Road drive. In winter, the road morphs into a cross-country ski trail. Arrange camping to truly behold the intensity of the dark sky—the monument closes at 6pm, so it's the only way to be there at the darkest hours. 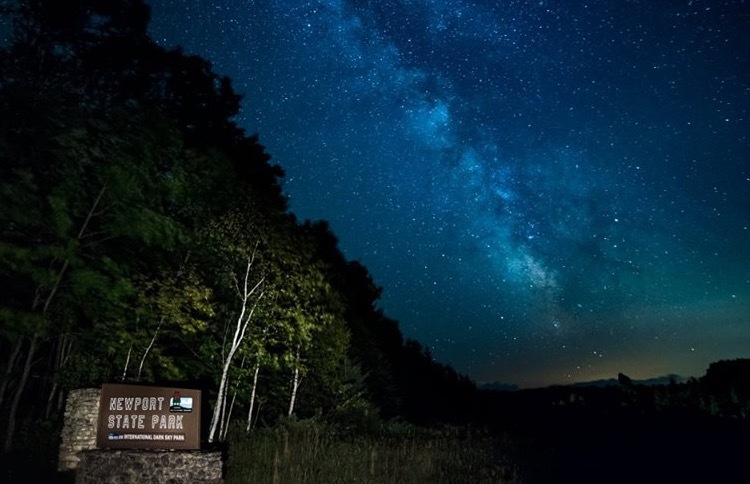 Denny Moutray
Newport State Park, Wisconsin
Newport State Park feels worlds away from the bustle of popular Door County. The park preserves a 2,400-acre wilderness that fronts 11 miles of Lake Michigan shoreline. Pebbly beaches and 30 miles of relatively flat hiking trails wind through woods and break into lake views. Rangers offer star talks at select times. To savor the glowing night sky, either overnight with your family at campsites that require packing in all your supplies, or arrive before sunset to get acclimated to the dark and depart before the park closes at 11pm. Door County offers plenty of lodging. 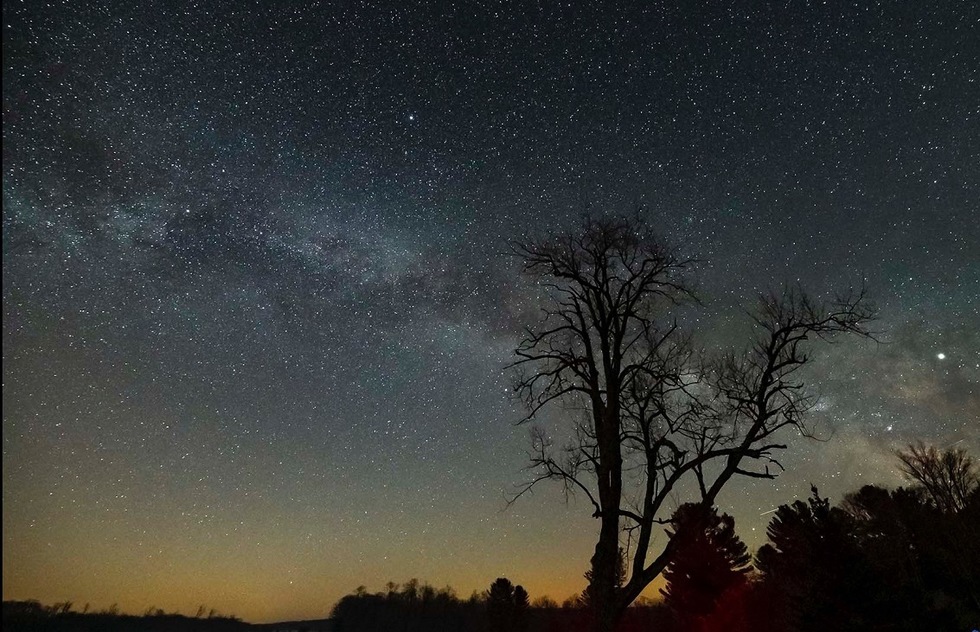 Curt Weinhold
Cherry Springs State Park, Pennsylvania
Surrounded by the 262,000-acre Susquehannock State Forest, 82-acre Cherry Springs State Park shines as a "gold level" dark sky park. That designation means Cherry Springs, near Coudersport, is one of the best places in the eastern United States to view the night sky. The starstruck can stay overnight at the Astronomy Observation Field provided they bring a telescope or binoculars and reserve a spot in the rustic campground. In season, rangers offer telescope viewing and talks. If you have a tween or teen photography buff, consider a night workshop (April through October) with local photographer Curt Weinhold, who teaches participants how to shoot a nightscape of silhouetted trees and shimmering stars. He took this photograph. 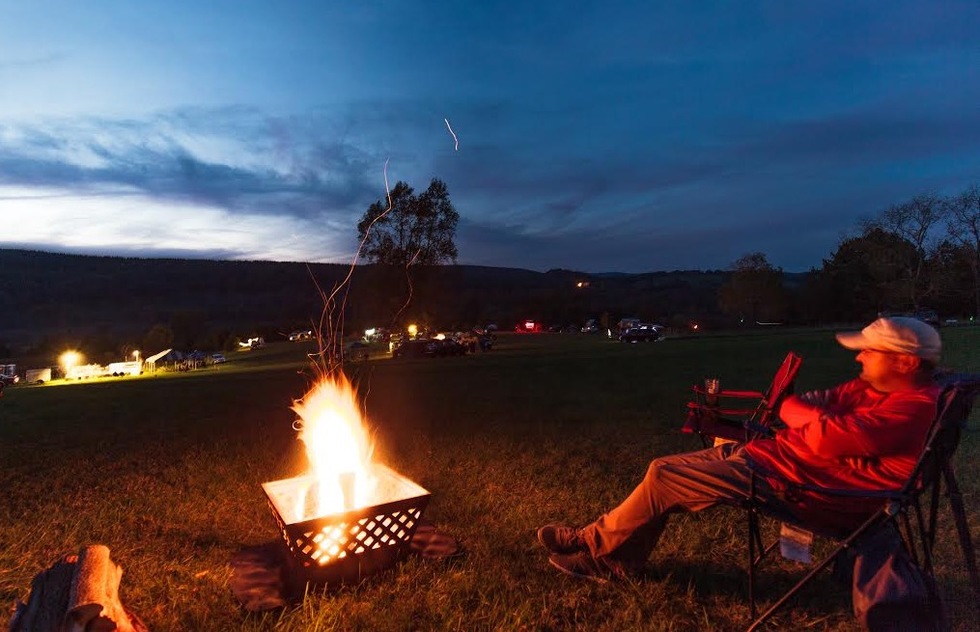 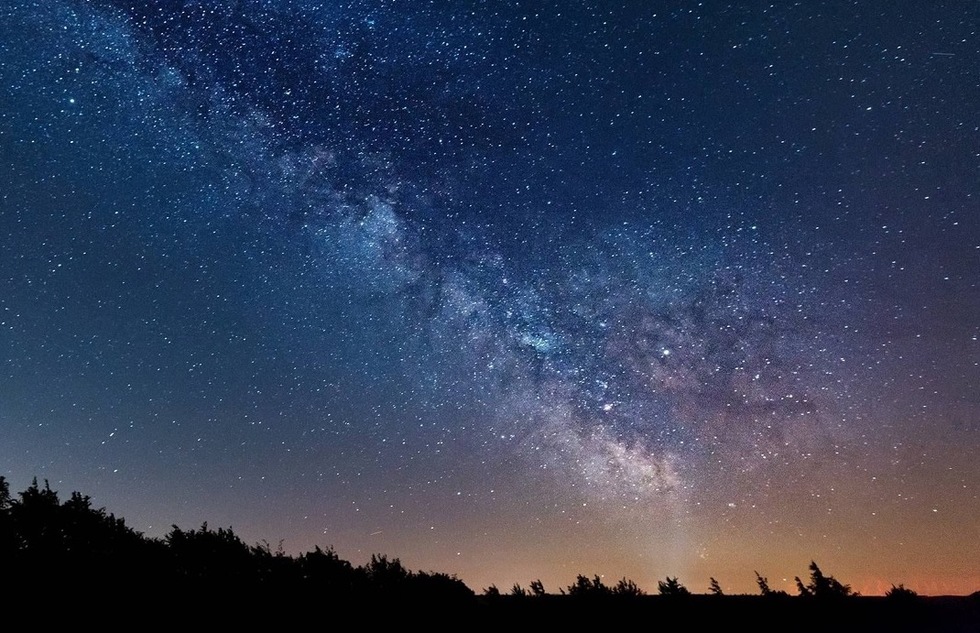 Eifel
Eifel National Park, Germany
Forests, mountains, lakes, and streams lure nature lovers to 27,182-acre Eifel National Park, in North Rhine-Westphalia, situated in west central Germany along the Belgium border. Eifel, within a two-hour drive or train ride of nearly 20 million people, is a haven filled with night sky wonders. Stars Without Borders’ sky viewing and talks, presented in German and in English, take place on clear nights at the park’s observatory at International Place Vogelsang—they're popular, so it’s best to register in advance. During the day, the converted rail trails and river paths provide easy and scenic cycling and hiking at skill levels suited to families. In the 1930s, amid the rolling hills and greenery, the Nazis built the NS-Ordensburg Vogelsang, a training camp for the future leaders of Hitler's Third Reich where students had to demonstrate physical perfection and proof of their lineage. Now it's a museum to the folly of that failed pursuit of the mythical “master race."

For Frommer's' picks for the best stargazing in Canada, read our feature about that.
National Parks
Outdoor & Adventure