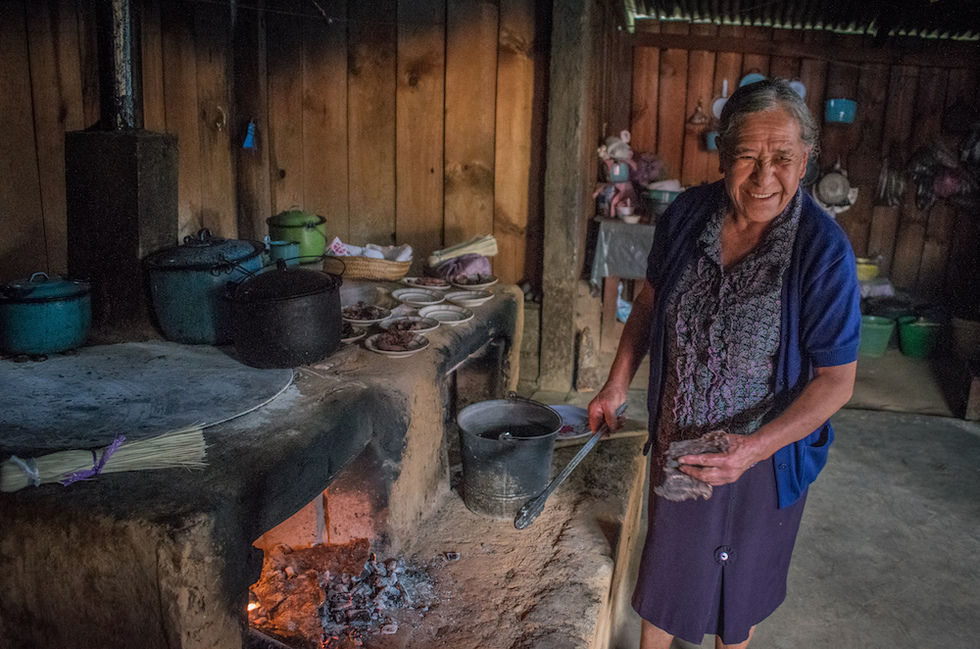 Forget everything you think you know about Mexican food: Oaxacan cuisine has its own thing going on. Thanks to its cultural diversity (16 indigenous groups live in the state, each with its own language and traditions), Oaxaca supports one of the richest prehispanic culinary traditions in Mexico. This includes using ancient ingredients such as chapulines (grasshopper) and huitlacoche (a corn fungus), as well as drawing upon age-old techniques to make not just one type of world-renowned mole, but seven. From seafood broths cooked with red-hot rocks to artisanal, hand-churned ice cream seasoned with toasted chapulines, a Oaxacan meal is a treat for the senses. But there are 10 Oaxacan dishes in particular that will have you reaching for your passport. Spoiler alert: There’s not a burrito or quesadilla in sight. 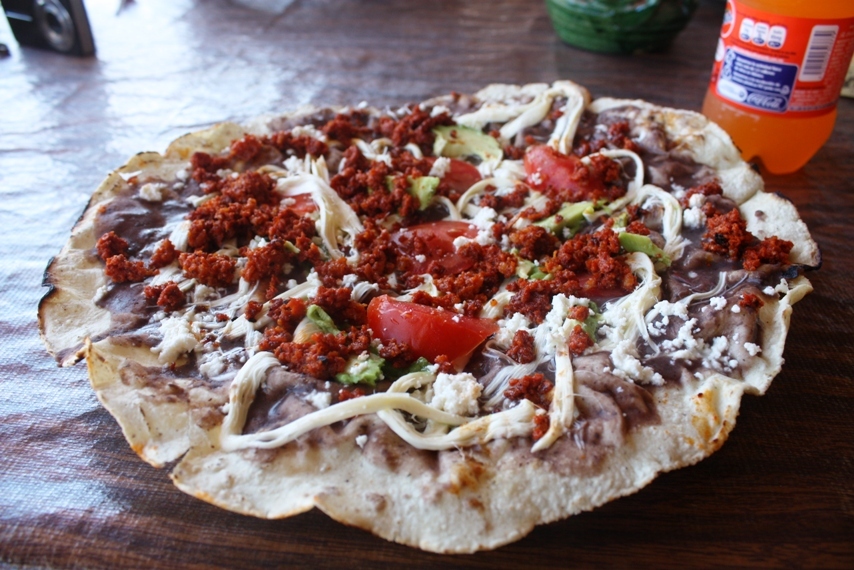 Tlayudas, also known as the “Mexican pizza," is Oaxaca’s most famous street food dish. It consists of a large, thin tortilla smothered in asiento (unrefined pork lard), toasted to a crisp on a fire-hot comal (flat griddle), and then loaded with toppings. First is meat: chorizo, chicharron (fried pork rind), and the popular tasajo (thinly sliced beef) are usually on offer. Then diners can choose to add Oaxacan cheese, refried beans, tomatoes, and avocado. While tlayudas are available in restaurants, the best ones are cooked over an open flame in Oaxaca’s street food markets. 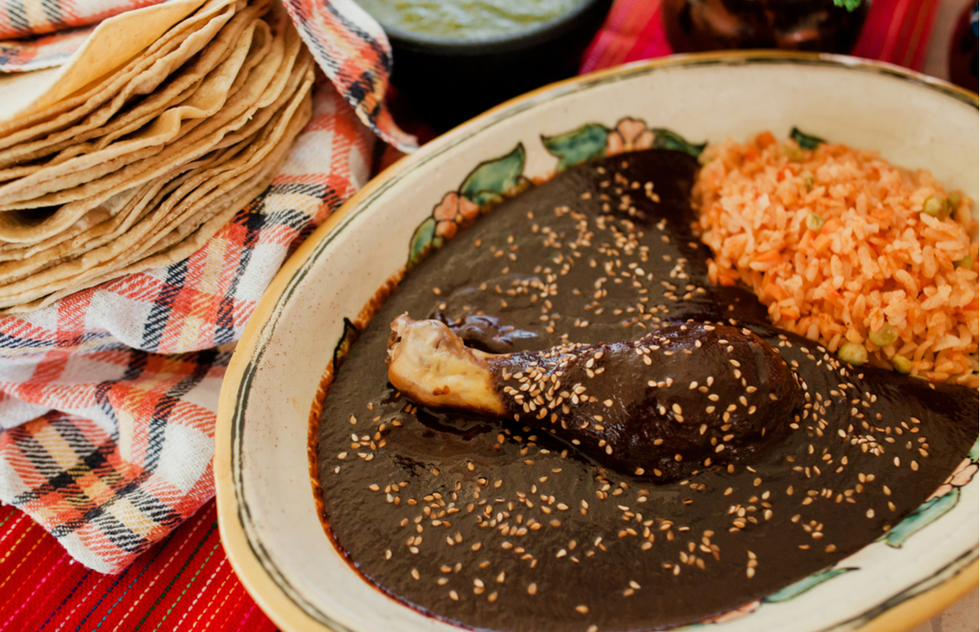 Marcos Castillo / Shutterstock
Los Siete Moles de Oaxaca (Oaxaca’s Seven Moles)
Outside of Mexico, mole (the complex, deliciously rich sauce made from a base of toasted chillies, nuts, spices and sesame seeds) is best known as a delicacy from Puebla. But the true origin of mole, which in Mexico simply translates to “sauce” and can come in an array of different flavors, is fiercely disputed by Mexico’s second mole capital, Oaxaca. Here, each of the state’s seven regions—La Cañada, La Costa, La Sierra (Sierra Norte and Sierra Sur), La Mixteca, El Papaloapan, El Istmo, and Los Valles Centrales—make a mole that is unique to them. While mole negro (a jet-black sauce served over a chicken drum stick and rice) is Oaxaca’s most famous, you can also sit down to a citrusy mole verde, a fiery mole amarillo, a fruity mole manchamantel, a rare chichilo, a sweet-n-spicy rojo, and a smoky coloradito. Whichever you choose to try, remember that each is made with serious love and care. Most moles can take days to prepare, and in top local restaurants in Oaxaca City highly trained chefs are hired specifically for their mole-making skills. 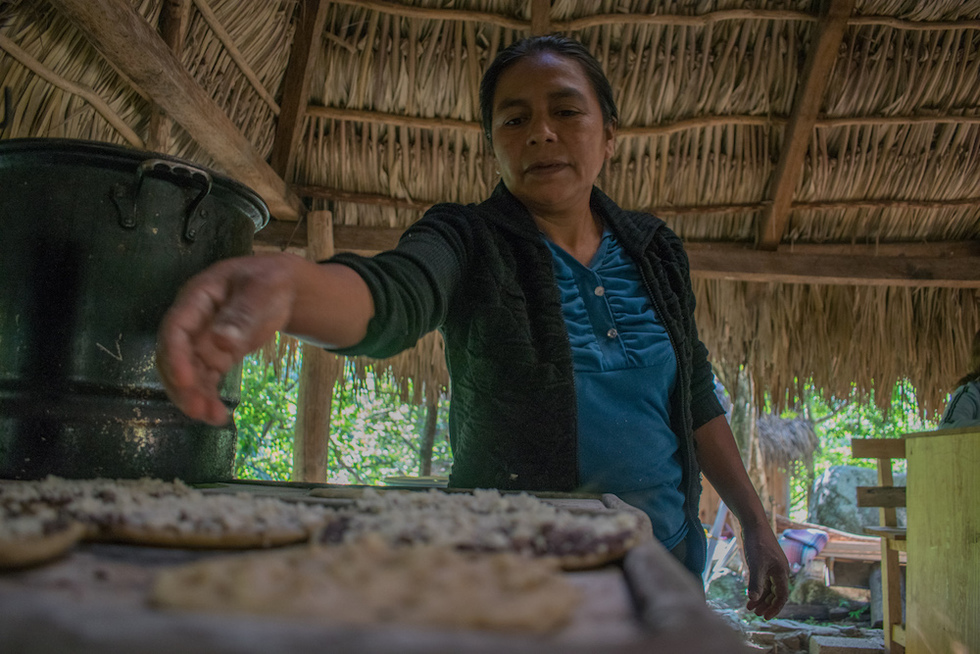 Memelas
Similar to sopes found on street stalls across Central and Southern Mexico, memelas are dessert plate-sized corn dough cakes topped with refried beans and queso fresco (fresh cheese). Street vendors throughout toast these thick, lard-drizzled snacks on an open flame comal as they do with the tlayuda; this gives the memelas their signature crispy-on-the-outside and soft-on-the-inside texture. While memelas are usually available any time of day, Oaxaqueños prefer to eat them in the morning. Look for stands serving memelas topped with mole or tinga (a spicy shredded chicken stew)—it may be the best Mexican street snack you’ll ever try.
advertisement 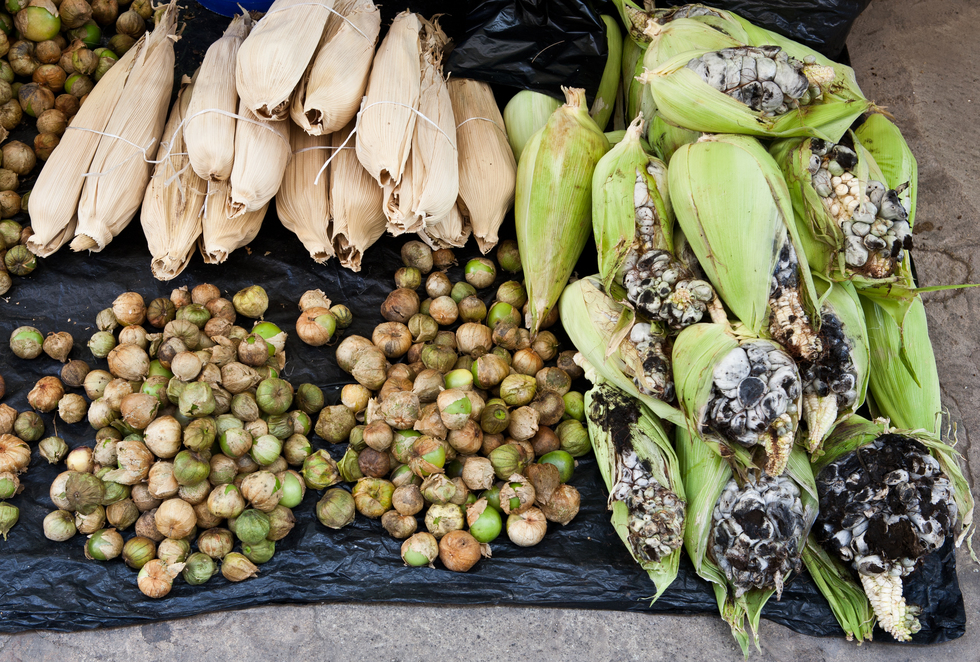 Tacos de Huitlacoche
Huitlacoche, a greyish, mushroom-like corn fungus, isn’t the prettiest of foods. But the earthy, sweet-tasting “Mexico’s truffle" is a delicacy in Oaxaca. Huitlacoche is a seasonal ingredient (May–November) that can actually be rare depending on harvest conditions—it often fetches a far higher price than the corn it grows on—so be sure to place the order right away if you see it on a taco, empanada, or quesadilla filling menu. 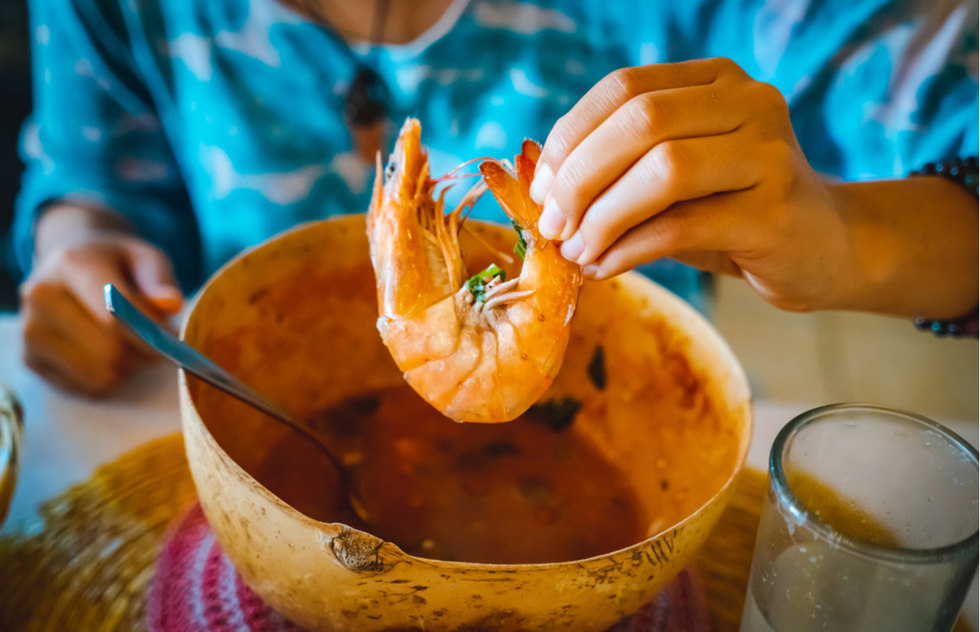 A speciality along Oaxaca’s Pacific coast, sopa de mariscos, or seafood soup, is a spicy tomato broth loaded with prawns, mussels, crab, and snapper. It’s most commonly served in a cazuelita (the pot in which it was cooked) with wedges of lime and finely chopped coriander to sprinkle on top. The sopa de mariscos, like any seafood dish in Mexico, is best savored in a beachfront cabaña with your toes in the sand and eyes on the surfers. 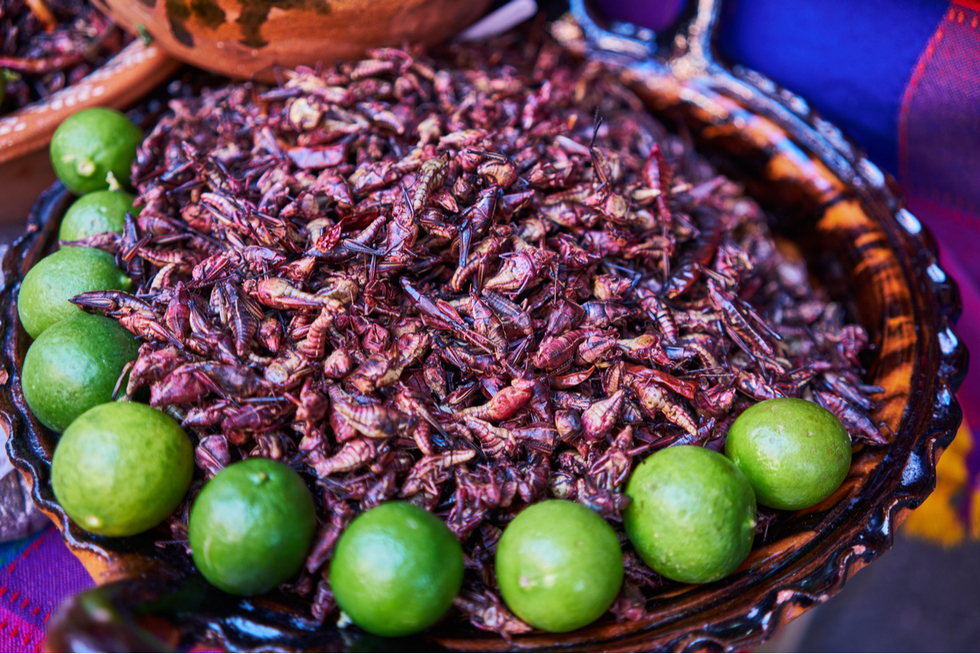 Dina Julayeva / Shutterstock
Nieve de Chapulin
Nieves—artisanal ice cream hand-churned in wood and stainless steel garrafas—are hugely popular across Mexico. Tasting a little more like sorbet than ice cream, the most common nieves come in preservative-free fruit flavors such as lemon, mango, hibiscus flower, orange, and cactus fruit. But when in Oaxaca, you should try something a little more daring: nieve de chapulin, or grasshopper ice cream. Toasted grasshoppers (pictured) are a common snack in Oaxaca, so it is not unusual to find them sprinkled in a taco, piled on top of a memela, or crushed and used for seasoning in guacamole here. For the best nieve de chapulin in Oaxaca city, go to Nieves Manolo—its addition of tamarind balances perfectly with the salty, smoky flavor of the toasted insect. 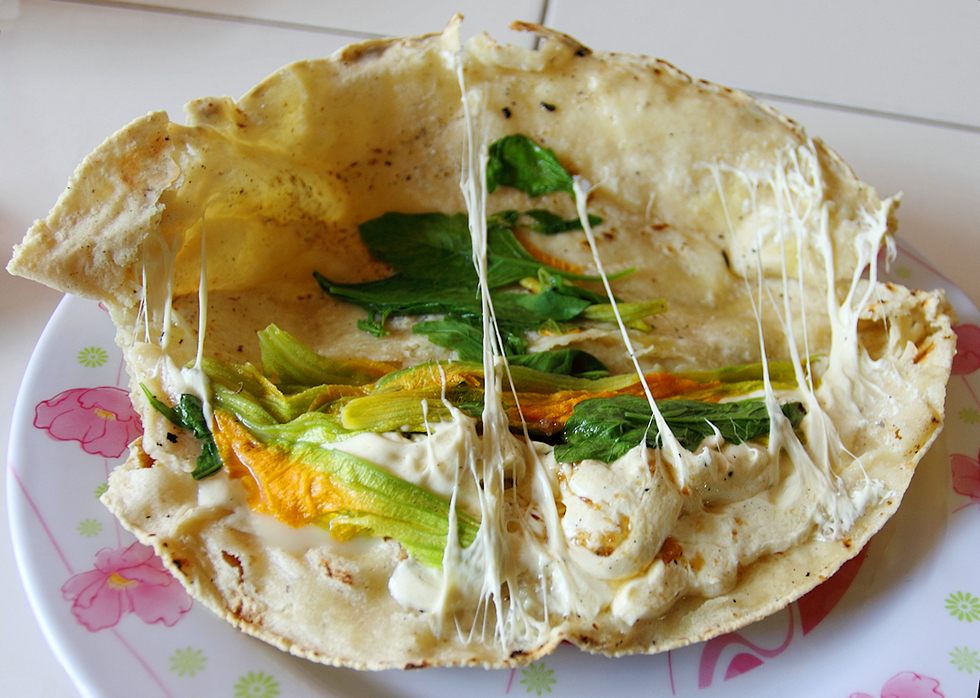 nsaum75/WikkiCommons
Empanadas
Anywhere else in Latin America, an empanada means a small, oval-shaped baked pastry filled with anything from cheese and tomato to shredded chicken and olives. But here in Oaxaca, empanadas refer to a different thing entirely: a dinner plate-size tortilla stuffed with some sort of meat and cheese combo (usually), folded in half, and toasted over a hot comal. Don’t miss the empanada con flor de calabaza, which is squash blossom with cheese served with an array of spicy salsas.
advertisement 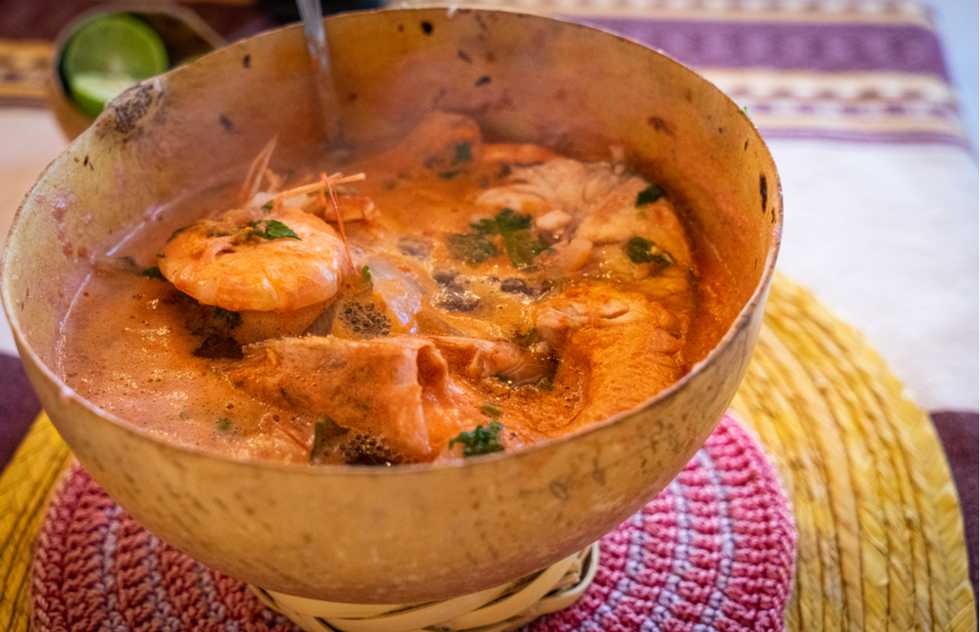 aindigo / Shutterstock
Caldo de Piedra
Caldo de piedra, or stone soup, is a fish broth cooked entirely with hot stones. The dish is a speciality of the Chinantec people, who have cooked freshly caught river fish along the Paloapan River for more than 500 years. There was a time when, if you wanted to get a taste of this unusual dish, you had to go to the remote town of San Felipe Usila. But thanks to a Chinantec family opening its Caldo de Piedra restaurant in Oaxaca City, now you can enjoy traditional stone soup in the state capital. 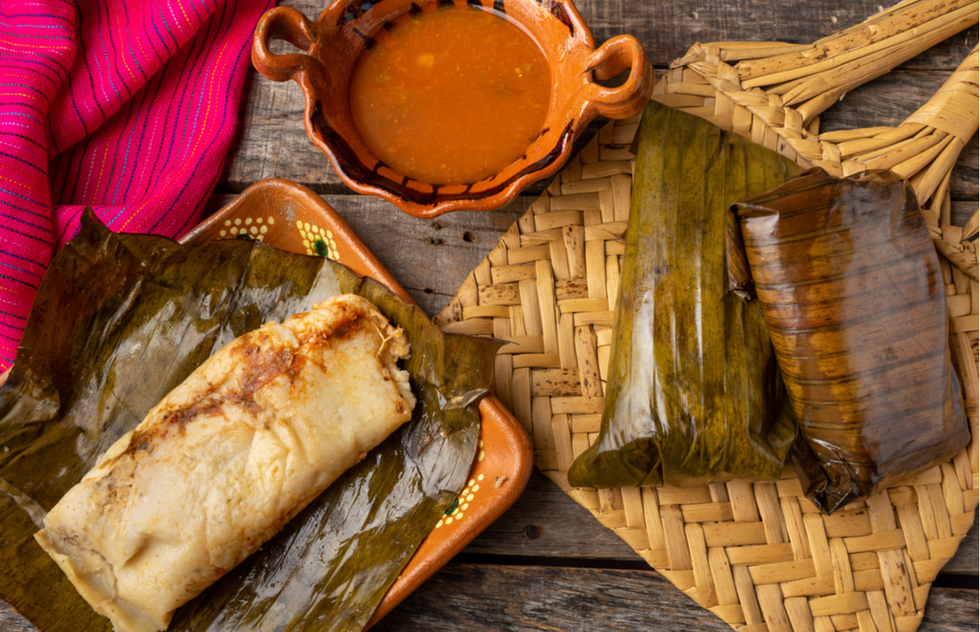 Playa del Carmen / Shutterstock
Tamales Oaxaqueños
Tamales—steamed corn dough parcels filled with anything from pork belly and cheese to chocolate and guava—are found everywhere in Mexico. But as always, Oaxaca does things a little differently. Here, corn husks, which are used to gently steam the parcels to perfection, are replaced with banana leaves, giving the ubiquitous corn tamale a slightly sweeter flavor. The fillings, too, are something to rave about: Oaxaqueños like their tamales filled with their famous mole negro, a rich, drool-worthy treat you’re unlikely to find anywhere else in Mexico. If you’re in Oaxaca City, head straight to Mercado 20 De Noviembre, in the city center, for some of the best in the state.
advertisement 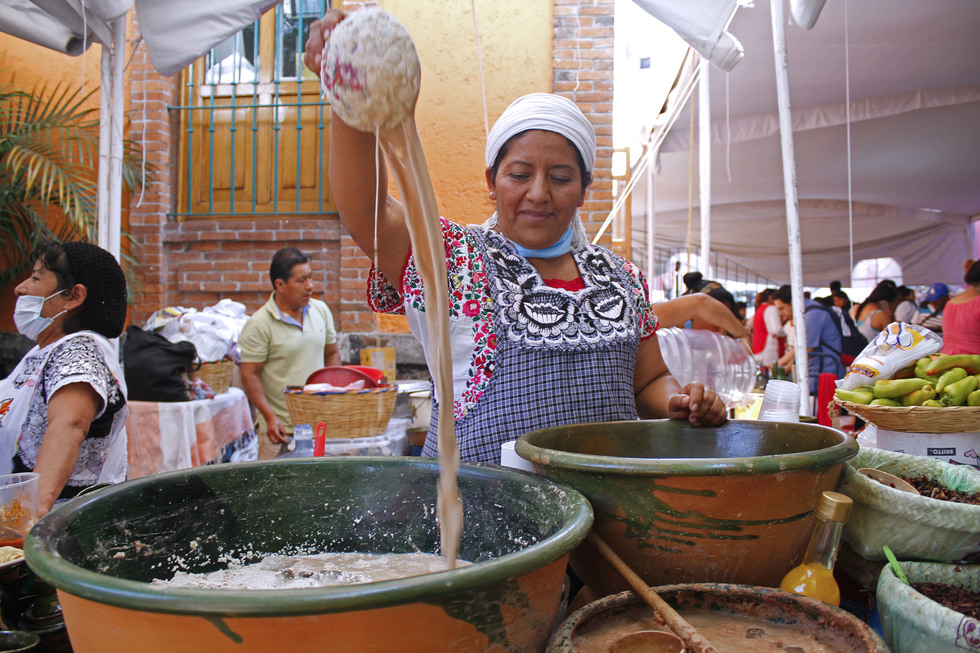 Sometimes a “must-try food” is a drink. When it’s as filling (and as delicious) as this one, it makes sense. Dating back to prehispanic Mexico, from before the arrival of Europeans, tejate is a thick, frothy drink made from ground maize, cacao beans, mamey seeds, and the key ingredient flor de cacao, a white flower that gives tejate its strong perfumed flavor and distinctive frothy top. The best place to try this ancient beverage is where it has been prepared and served for centuries: in any good Oaxacan street food market. Look out for women scooping out a powdery, milky concoction from huge ceramic bowls using a colorful jicara (a cup made from calabash fruit).