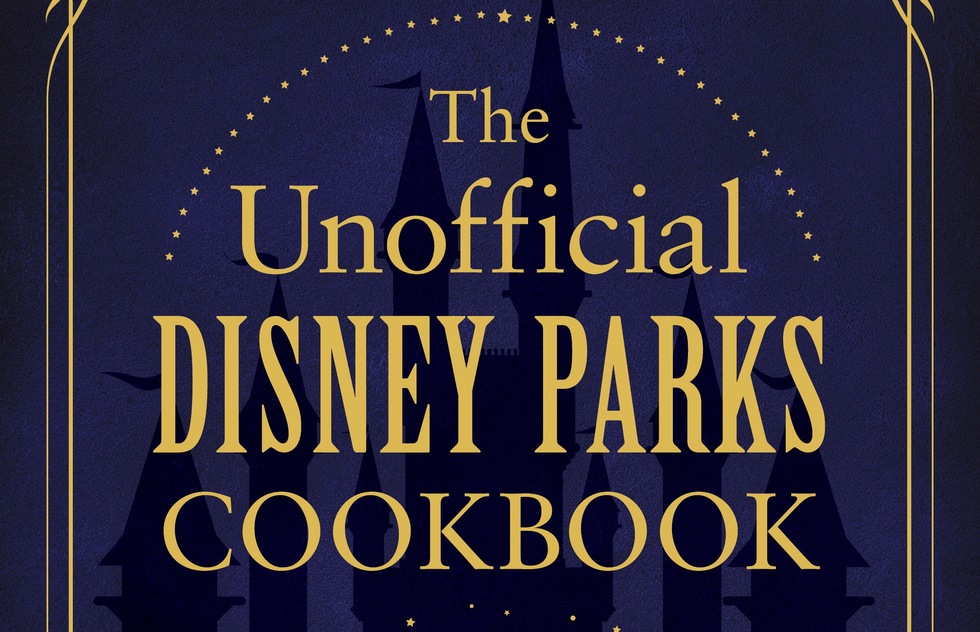 Dole Whip at Magic Kingdom, Mickey Pretzels at Disney’s Hollywood Studios, Frozen Lemonade at Disney’s Animal Kingdom—Disney has so much to offer, and one of its best attractions is its food. Of course, a trip to Disney isn’t always in the cards, but luckily you can bring its treats straight to your own kitchen.

I was lucky enough to grow up in Anaheim Hills, California, just 15 minutes from the Disneyland Resort. When I was a kid, my family would sometimes say, “Anyone want churros? Let’s go to Disneyland and have some churros.” As a college student, I participated in two Disney internships and was able to work at Disney’s Animal Kingdom and Disney’s Old Key West Resort. Of course, life gets busier, and a trip to California or Florida every few months just isn’t feasible for most people, especially now.

Which is why I started re-creating that magic at home. Whether you’ve been to the parks a hundred times and crave your favorite Disney dishes or you’re just looking for something Disney-inspired to make you feel like you’re on vacation, each of the 100 recipes in my book The Unofficial Disney Parks Cookbook has been thoroughly tested to ensure a taste worthy of a certain mouse.

Read on for a few of my favorite Disney-inspired recipes—soon you will be a able to cook one or two great treats from all six of Disney's U.S. theme parks. 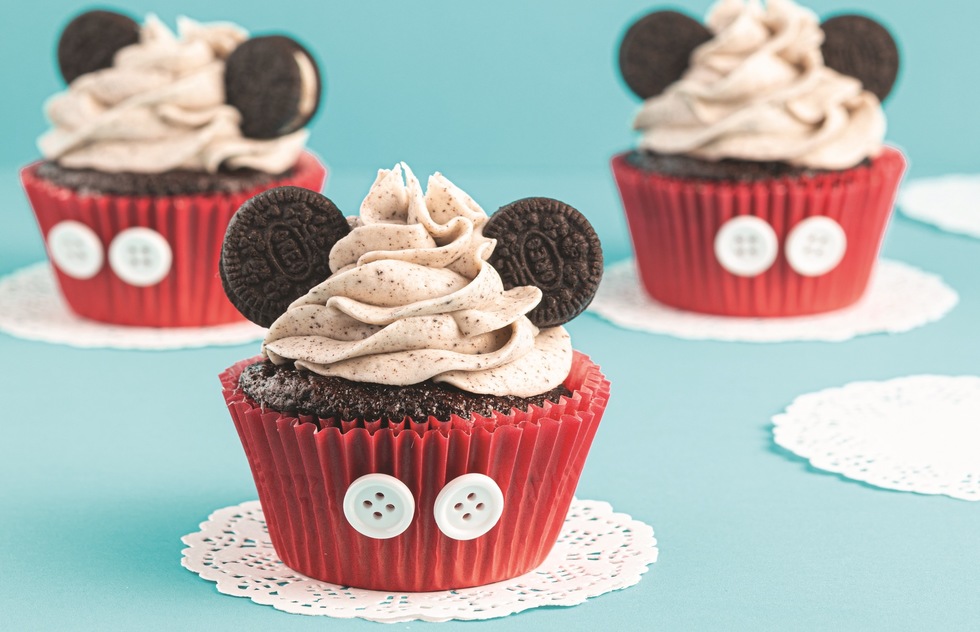 In the 1950s, Disneyland began serving treats that were new and fun, and the tradition continues. Candy Palace on Main Street, U.S.A. serves these delectable, super-sweet Cookies and Cream Mickey Cupcakes. Topped with the iconic mouse ears, these popular treats are easy to whip up and sure to please.

For the cupcakes, you’ll beat butter, sugar, eggs, and vanilla extract in a stand mixer before adding in flour, baking soda, baking powder, cocoa powder, and salt. As it mixes, slowly add in 1 cup of whole milk. Scoop the batter into muffin tins and bake for 15 minutes. After cooling them for about an hour, top with frosting made from butter, confectioners’ sugar, cream cheese, and heavy cream—with crushed chocolate sandwich cookies stirred in and whole cookies standing upright to create Mickey Mouse ears. 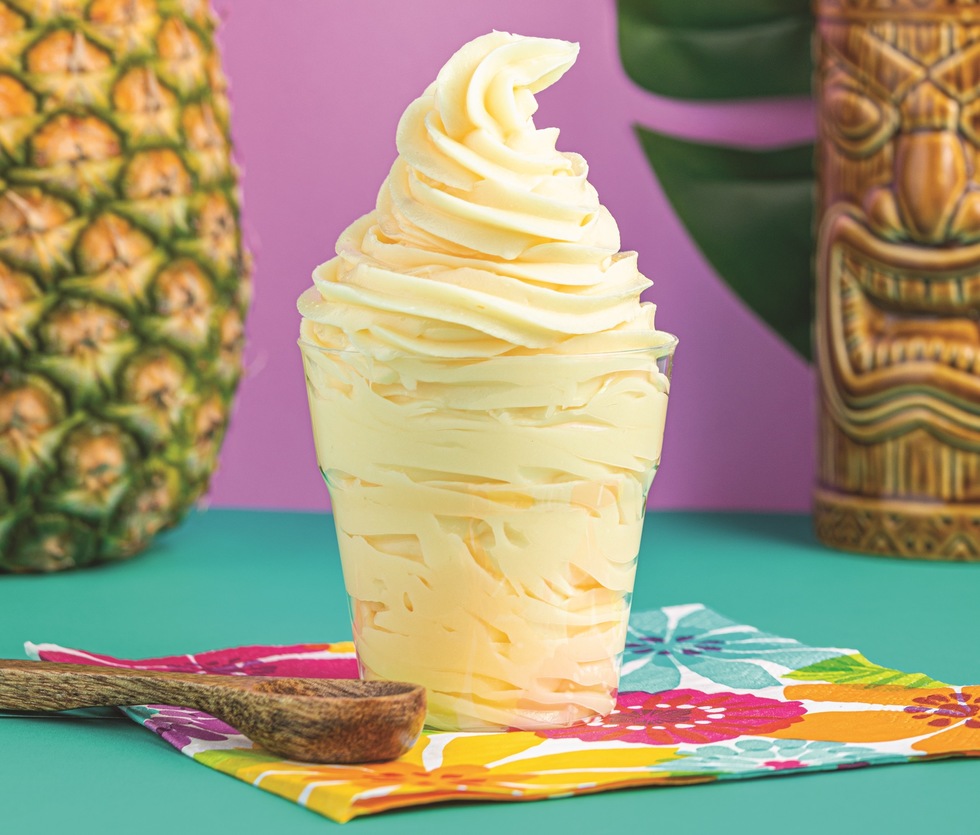 Harper Point Photography
Magic Kingdom: Dole Whip
Dole Whip is arguably the number one cult classic favorite treat of all time at Disney Parks. The “real” Dole Whip, sold in the Magic Kingdom's Adventureland area, is prepared with a premade powder-and-water mixture. This recipe (which serves six) can be made at home without purchasing the mix and tastes just like the original. 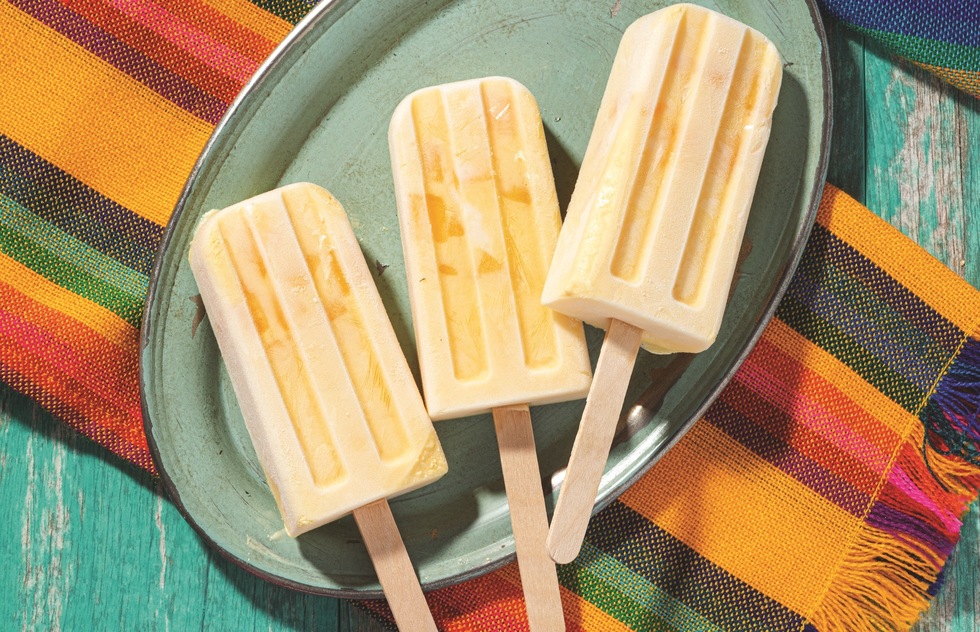 One popular way to experience Epcot is to “drink around the world,” enjoying an alcoholic beverage in each of its 11 international pavilions. A growing trend is also to “snack around the world,” or try at least one snack or treat from each country. This gives guests an opportunity to take in the country not only with their eyes but also with their taste buds.

Found by the Mexico pavilion courtyard, Mango Popsicles are the perfect treat to enjoy while catching a performance by Mariachi Cobre. This group was formed more than fifty years ago and graces Walt Disney World audiences with traditional favorites as well as songs from the Pixar film Coco. Bring a little tradition to your own kitchen with this simple recipe (serves eight).

In a blender, combine all ingredients and blend until smooth. Leave some small chunks remaining if preferred. Carefully pour mixture into Popsicle molds. Allow to freeze solid overnight.

If you like your Popsicles with a little more substance, add more mango chunks to the mold as you fill it. You can even get wild and add shredded coconut to the Mango Popsicles for a delicious blend of different fruity flavors. 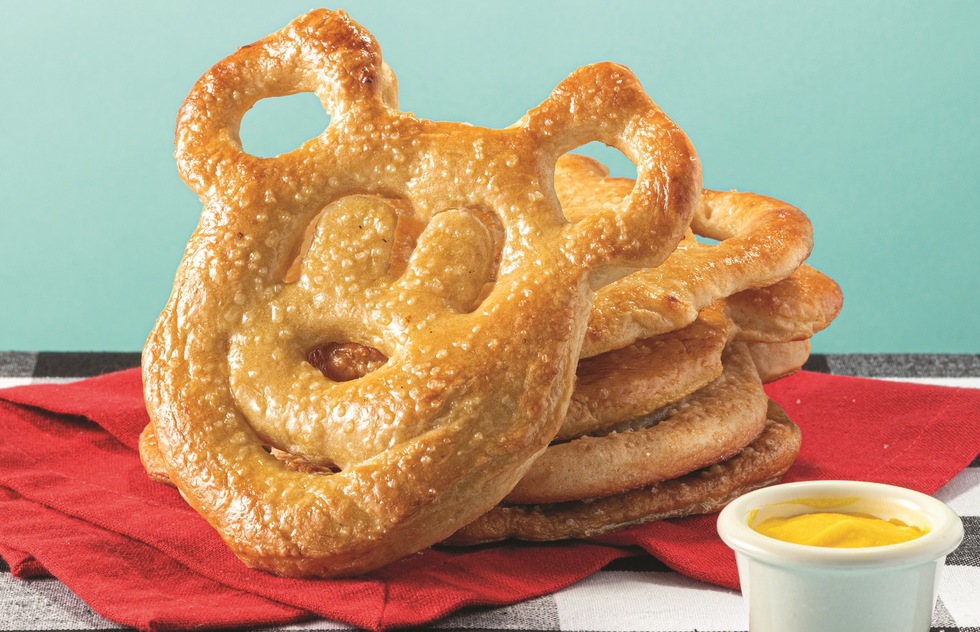 Disney’s Hollywood Studios is the most eclectic of the Disney Parks, its unifying theme being “stories inspired by movies”—which can mean just about anything. Because of that, its food culture is also across the board, from extremely fine dining to common comfort foods.

These Mickey Pretzels are in the iconic shape of Mickey’s face, but you can get creative with other Disney-inspired shapes in your own kitchen. Cutting the dough, rather than twisting it like traditional pretzels, allows for more creativity and fun. Feel free to get wild with the toppings: Try cinnamon sugar or Everything Bagel seasoning.

In the bowl of a stand mixer, add warm water and sprinkle yeast on top. Let sit 10 minutes to activate the yeast, then add brown sugar and salt. Beat on low speed to combine then add in flour and knead for 5 minutes. Cover dough with a cloth and let it rise for 30 minutes in a warm place. Cut the dough into eight equal pieces, and working with one piece at a time, shape into Mickey faces. Working with one Mickey at a time, poach each Mickey in a boiling water-with-baking-soda bath for 15 seconds. Transfer the Mickeys to a prepared baking sheet. Brush Mickeys with an egg wash, then sprinkle with kosher salt and bake about 10 minutes in a 450 F-degree oven. 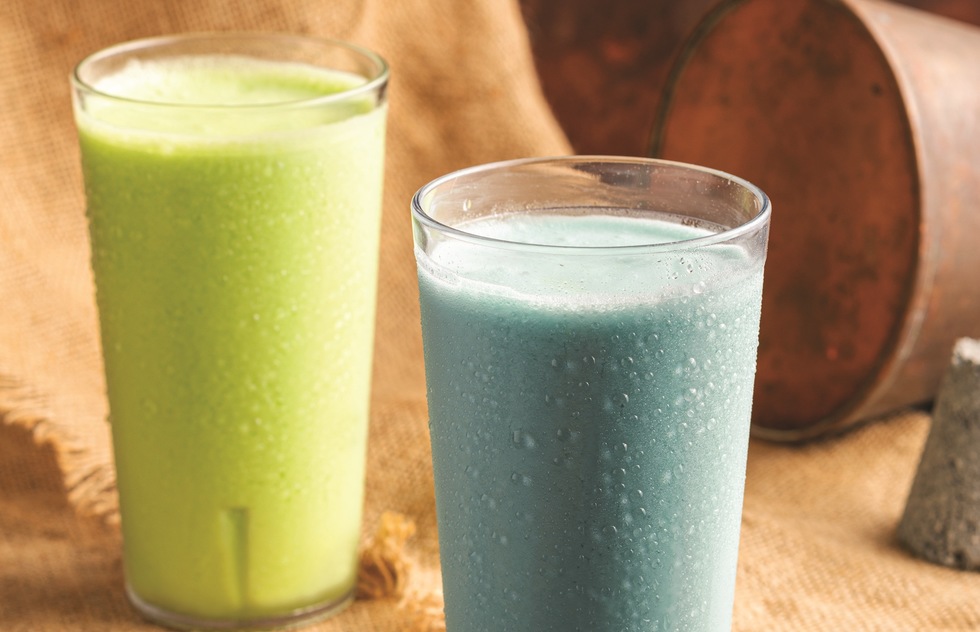 It was a challenge for the designers of Star Wars: Galaxy’s Edge to create a flavor to match the iconic look of Blue Milk from the Star Wars movies. Mark Hamill (the actor who played Luke Skywalker) said the Blue Milk they used on set for Star Wars: A New Hope was shelf-stable milk and triggered his gag reflex.

Instead of coming up with something predictable for the parks, like a milk flavor, Disney swung the other direction and dreamed up a flavor no one would expect. This fruity, slushy drink has been a go-to at the parks ever since. I think Mark would find this version, which serves two, far more palatable.

In a blender, add all ingredients and blend until smooth. Pour into an ice cream machine. Follow manufacturer’s instructions and run about 8 minutes until slushy. Enjoy immediately. 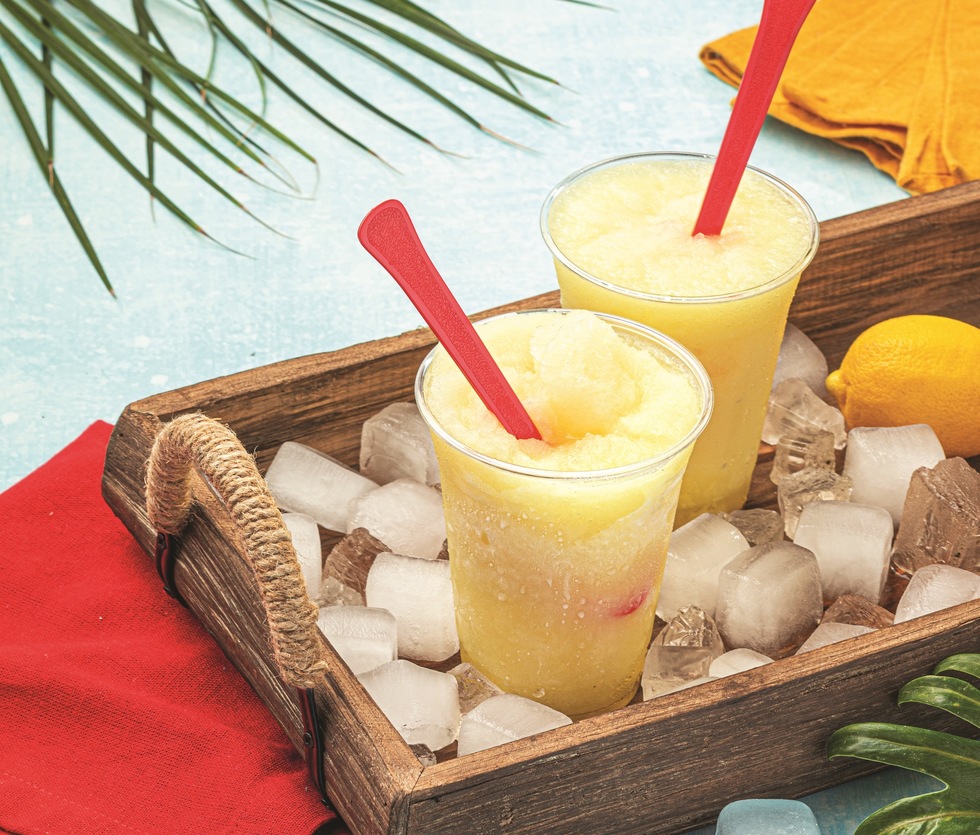 There are two things that make Disney’s Animal Kingdom stand out from the other parks: live animals and immersive storytelling. It has always been first and foremost an authentic cultural experience. If you talk to cast members working at any snack stand, restaurant, or attraction and ask them the backstory of their place of work, they can regale you with a fictitious tale that sounds true.

Disney Parks have served three different varieties of Frozen Lemonade over the years: original lemon, strawberry, and orangeade. If you want to try the other two varieties at home, follow the freezing directions below (which serve four) but add pre-made strawberry lemonade or orange juice to your ice cream machine instead of the lemonade.

Note: The Frozen Lemonade at Disney is Minute Maid brand. So if you want that exact authentic flavor, buy a bottle of Minute Maid lemonade from your local grocery store and follow these freezing instructions. 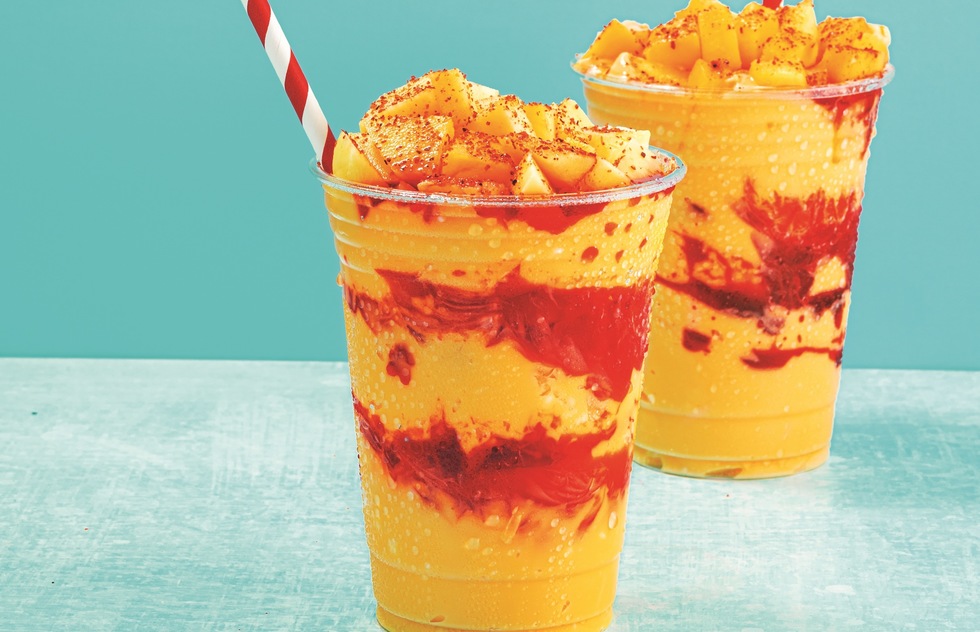 Decades after Disneyland first opened, Disney finally opened a “second gate” in California in 2001. Rather than focusing on Americana in general, Disney California Adventure shines a light on the culture of the Golden State. From one end of the park to the other, Mexican roots within California are felt and tasted. Once the park started to shift in 2007 from focusing on California themes to Disney’s lucrative intellectual properties like Pixar and Marvel, it began re-creating favorite snacks and treats shown on screen. The blend of authentic cuisines and inventive movie offerings has made Disney California Adventure a park worthy of great food lovers.

Available in Hollywood Land, Mangonada Smoothies—a delicious and refreshing Mexican treat—sure helps beat the heat on a California summer day. The mix of salty, spicy, and sweet is so satisfying. This recipe serves two. 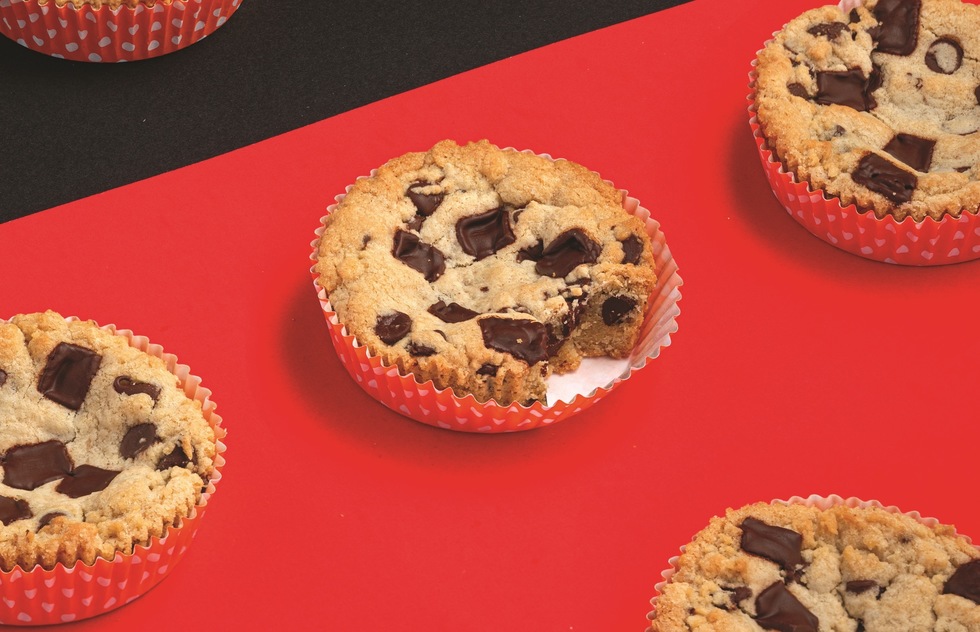 When all you want after a long day of waiting in lines is a sweet treat, the Pixar Pier area of the park has you covered. The monstrously thick Jack-Jack’s Num Num Cookies originated with 2018's hit movie Incredibles 2, when Bob Parr has to use “Cookie Num Nums” to lure his baby, Jack-Jack, out of different dimensions.

In the bowl of a stand mixer, you’ll add butter and shortening and cream together well. Then beat in brown sugar and granulated sugar, mix in vanilla and egg, and add flour, baking soda, and salt. Stir in ¾ cup chocolate chunks. Pack three 4-inch ramekins with ½-inch cookie dough, top dough with ¼ cup chocolate chunks, and bake 15 minutes in a 375 F-degree oven.

Allow cookies to cool completely before removing from ramekins. 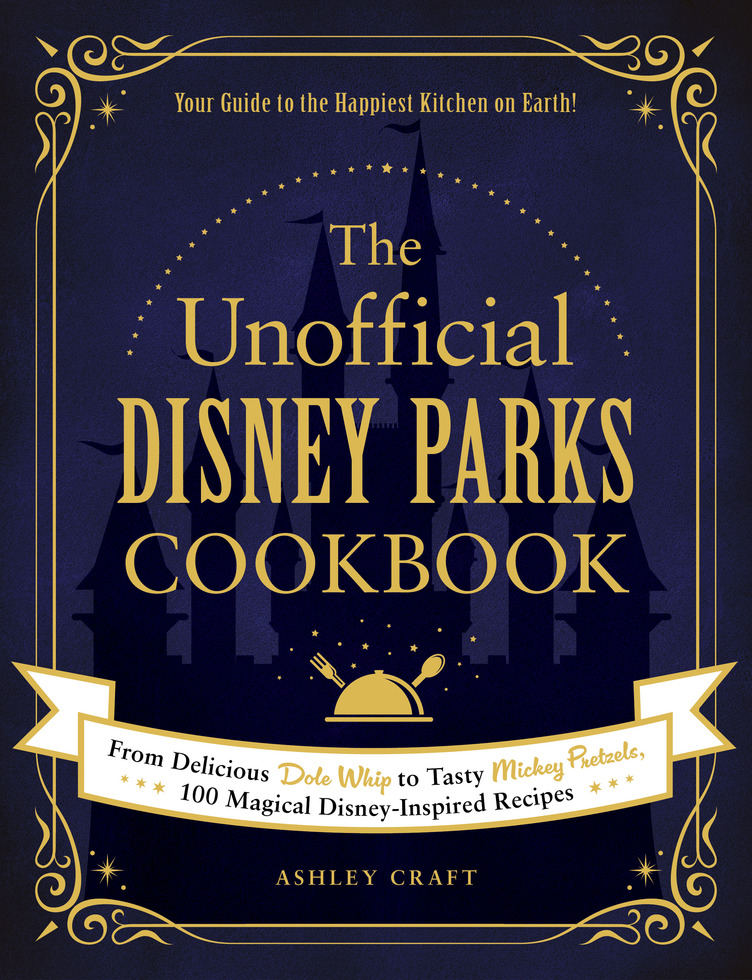 The full, 240-page book contains 100 recipes, including the beignets from Disneyland's New Orleans Square, baked macaroni and cheese with pulled pork from Disney's Animal Kingdom, and the parks' beloved corn dogs and churros.

This feature was adapted from The Unofficial Disney Parks Cookbook by Ashley Craft, copyright © 2020 by Simon & Schuster, Inc. Used with permission of the publisher, Adams Media, an imprint of Simon & Schuster. All rights reserved.

You may also like: Ashley Craft's book of recipes for Disney's great drinks, cocktails, and mocktails.