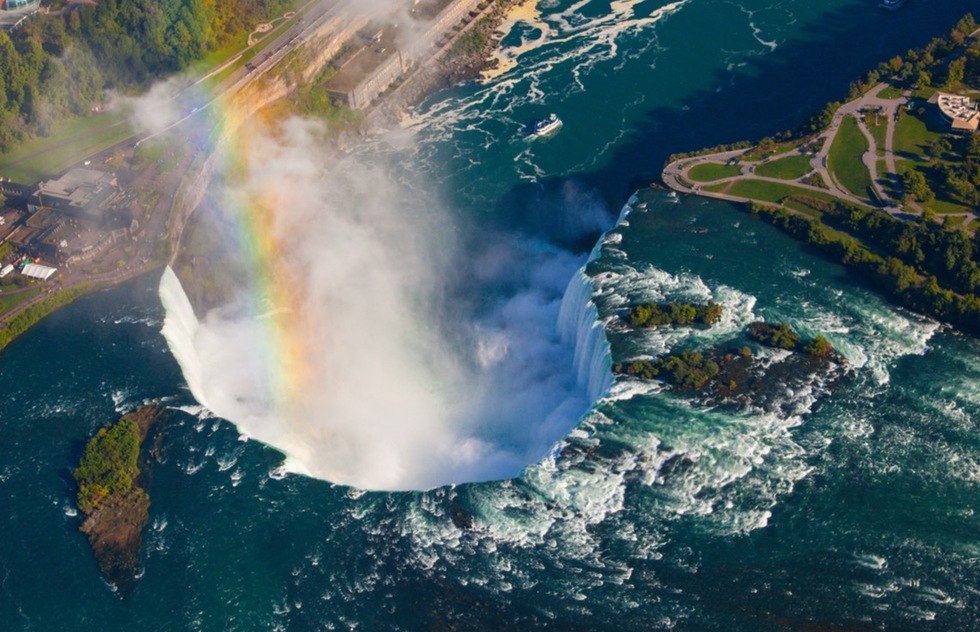 Doing Niagara Falls If You're Stuck on the American Side

The legendary Niagara Falls, one of the greatest natural attractions in North America, straddles the border between Ontario, Canada, and New York State. In an ideal tourism situation, you'd be able to drive or stroll across the Rainbow International Bridge to enjoy the view from both banks of the Niagara River.

But sometimes you just can't get over the border. Maybe you don't have enough time. Maybe your legal status won't allow it. Or maybe you happen to be living through a once-in-a-lifetime global pandemic that has sealed national borders.

It's all good! If you're restricted to the U.S. side, you won't find yourself over a barrel. There's plenty to do. In fact, some of the best activities in the Niagara Falls area are on the American side.

Pictured above: Terrapin Point, at right, juts into the eastern side of the Falls from Niagara Falls State Park in New York State. 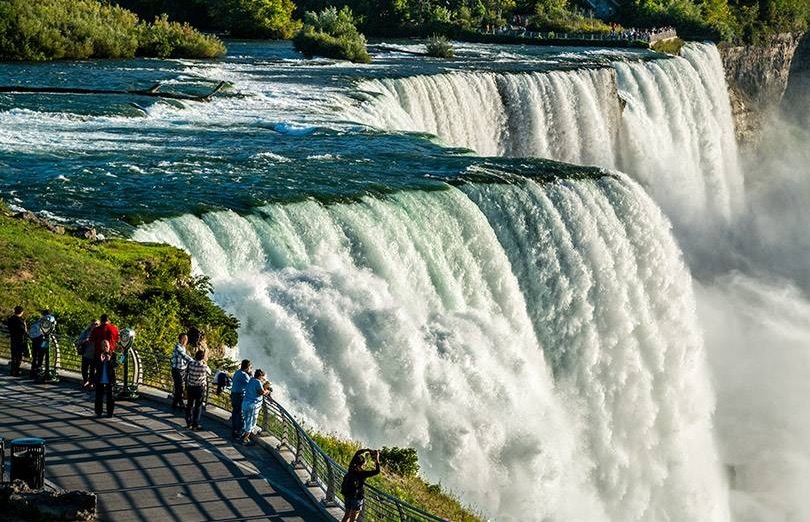 If we're being honest, the Canadian side has richer options for quality lodging and tourist amenities, although the stuff on that riverbank tends toward cheesy honky-tonk. New York's territory beside the Falls, on the other hand, has been preserved from development since the 1880s. In fact, the area is now the oldest state park in the United States.

The more-than-400-acre Niagara Falls State Park, which is separated from the core of town by a breakaway river, is speckled with whitewater-spanning bridges, river islands, curving walkways, and native animals. The park was originally designed by seminal landscape architects Frederick Law Olmsted and Calvert Vaux, who made scenery the star—just like they did for their most famous project, Manhattan's Central Park.

Canadians view the mighty Horseshoe Falls more or less straight on, but Americans can get an extreme close-up of the cascade with a sidelong view at Terrapin Point. Two more epic waterfalls are entirely within U.S. borders: American Falls (pictured above from Prospect Point) and Bridal Veil Falls, both of which can only be accessed from New York State.

Free to enter on foot; fees for parking; NiagaraFallsStatePark.com 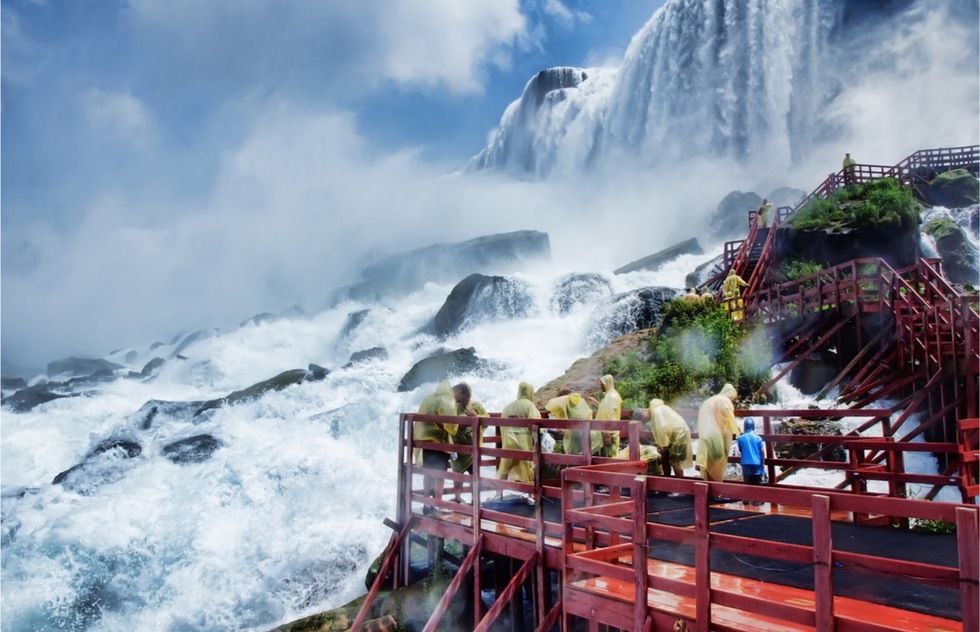 In the 19th century, Niagara Falls was one of the most celebrated tourist stops on the planet. "I never in my life was in such a state of excitement," wrote Charles Dickens in a letter about his visit in 1842. One of the most beloved thrills for visitors was climbing down a rickety staircase to stand in the Cave of the Winds, a 130-foot-tall cavity behind Bridal Veil Falls. As you can imagine, the incessantly eroding rock face made it breaktakingly unsafe—which was half the appeal—and over the years, the Cave claimed tourist lives with alarming regularity. By the 1950s, the mouth of the cavern had deteriorated past the point of salvation and the feature was blasted off the Falls for good.

But the daredevil diversion lives on, at least in name. Newer, sturdier, and ever-changing walkways have been installed in front of Bridal Veil Falls. Dare to face the roaring spray by starting in the state park, where, happily, a modern elevator takes you safely to the walkway. A soaking is unavoidable—which makes it all the more amazing that the tour is open even in the depths of winter. 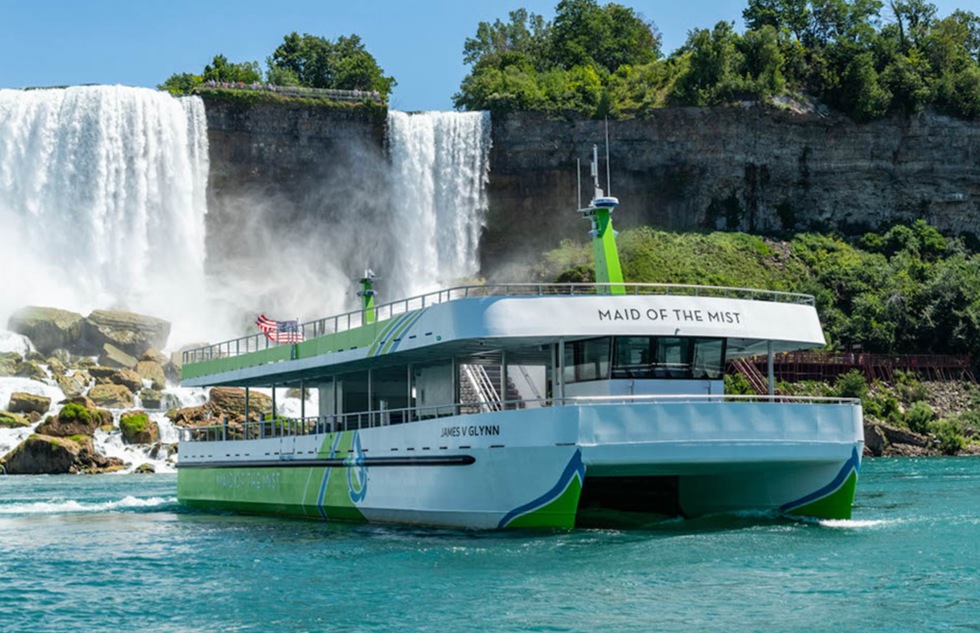 There's actually a (legal) way to enter Canada on the sly: Take the Maid of the Mist, which has been sailing since 1846. It's not a single boat anymore but a fleet of all-electric vessels that depart from Niagara Falls State Park and creep toward the deafening thunder of Horseshoe Falls. At several points during the tour you'll be floating in Canadian waters—and soaking up the views from that side of the border. But because you don't dock in Ontario, you don't need a passport. The 20-minute ride sets out every 15 minutes.

Admission to this and several other attractions are sold as part of the Niagara USA Discovery Pass, but because not everything included on the pass chargees admission, Frommer's does consider this product to be a good value.

Late May to early November; MaidoftheMist.com 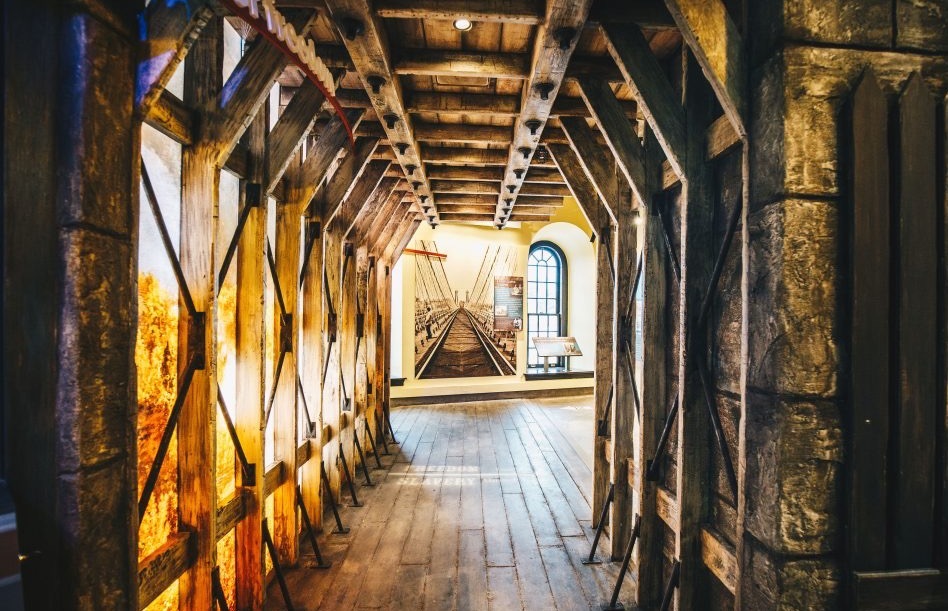 By this point, you're probably eager to leave behind the touristy spots and get to know the area on its own terms. Your first stop should be the excellent Niagara Falls Underground Railroad Heritage Center, which opened in 2018 after years of thoughtful planning and top-of-the-line execution.

For enslaved people who escaped bondage and traveled north on the Underground Railroad, finally glimpsing the mists of Niagara Falls meant seeing freedom at last. The Falls—and the many locals who secretly helped escapees flee across the Suspension Bridge to Canada—played an enormous role in the antislavery movement, yet it was only recently that a museum about that chapter was established. Small, powerful, and packed with harrowing stories, the center deserves to be a requisite stop on the Niagara Falls visitor circuit. You'll find it about a mile and a half downstream of the main Falls district, by the city's Amtrak station, where the Whirlpool Rapids Bridge now crosses the river. The abandoned abutments of the Suspension Bridge, which was dismantled in 1897, are right outside. 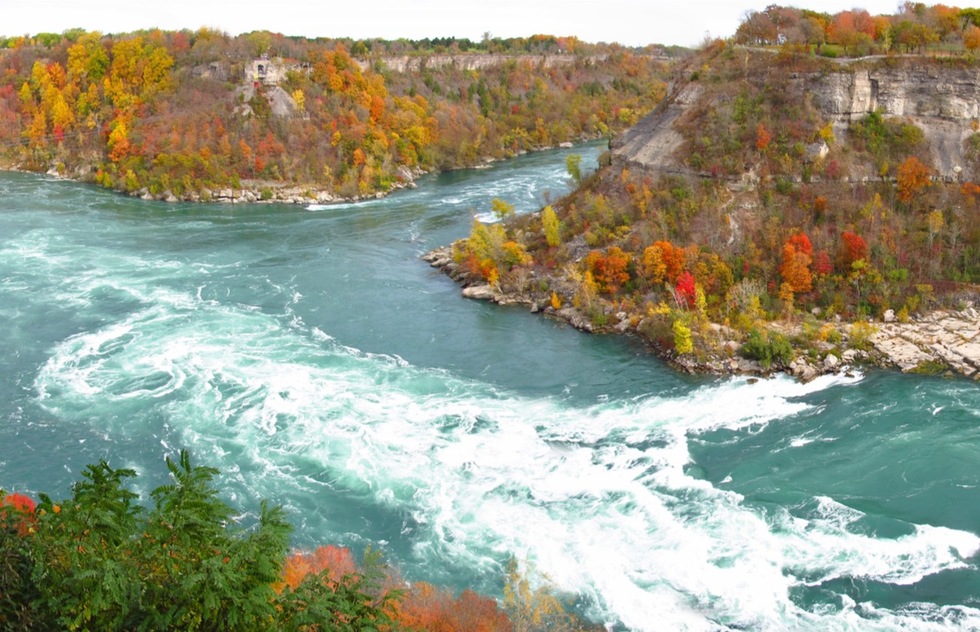 Let it be known: The Niagara Gorge is one of the most underrated day hikes in the United States. Photos can't do it justice. Lush with vegetation that thrives on the mist and strewn with boulders deposited by the ravages of time, the landscape is constantly changing. On the New York side, a well-maintained trail threads alongside the river's edge, where a scenic trolley ran from 1895 to 1935. Just feet from the path, the mighty greenish-blue Niagara River, freshly churned by the Falls upstream, roils and heaves as it races north toward Lake Ontario.

The gorge's popularity is surging. In 2020, the much-loathed Robert Moses Parkway, which for 60 years divorced the residents of Niagara Falls from the stirring beauty of the Niagara River, was finally removed from the rim as part of a $42 million park expansion that restores the riverside as a 2-mile-long green space devoted to hikers and cyclists rather than cars.

There are several places where you can safely walk down to the river's level, but our favorite is Whirlpool State Park about 2.5 miles north of the Rainbow Bridge. The park puts you in a forest alongside the formidable Class 6 rapids that spew from the churning field of whitewater north of the Whirlpool Bridge. Or you can stay in the shadow of downtown Niagara Falls by taking the free elevator at the Schoellkopf Power Plant ruins (a 3-minute walk north of the Rainbow Bridge) to a flatter, less bucolic riverside segment closer to the main falls.

Pictured above: Whirlpool State Park as seen from the Canadian side 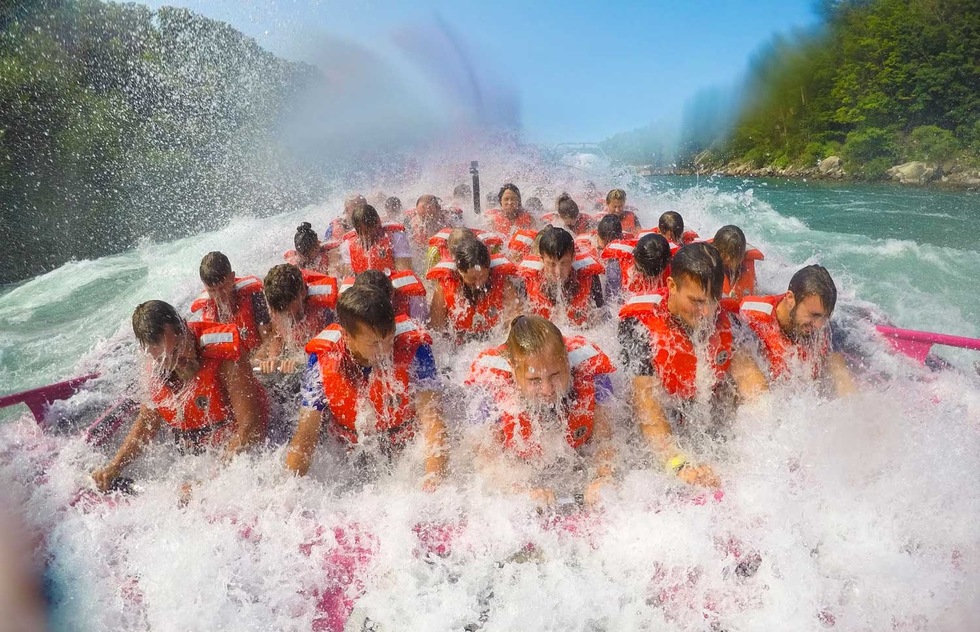 If you're willing to drench yourself in both the Niagara River and its most touristy delights, there's a way to challenge the water itself. The Whirlpool Jet Boat, which operates from the town of Lewiston about 7 miles north of the Whirlpool Rapids Bridge and the Underground Railroad Heritage Center, nimbly navigates the fury of the gorge in a segment that's below and away from the main falls. There's a wet version (pictured), plus an enclosed ride that's just as aggressive but keeps you dry. 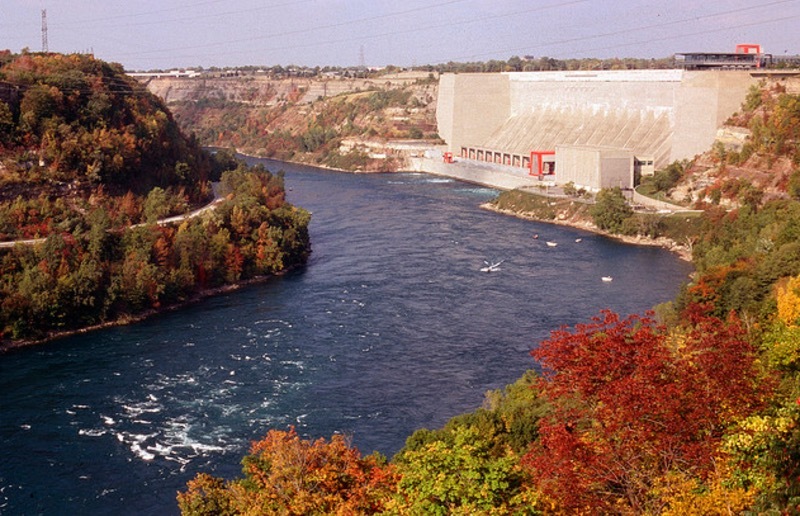 Also in Lewiston, the Niagara Power Vista, which is free to visit, explains how the flow around the Falls has been harnessed to generate electricity for a sizable chunk of North America. You'd think a museum about hydroelectric power would be, well, dry. But consider this fact: Engineers have the capability to divert the Niagara River away from the Falls in order to, in effect, turn them off—and there's photographic proof of the feat. The Power Vista may cost nothing to see, but the state has nevertheless lavished funds to keep it current—you'll find plenty of interactive exhibits to occupy kids and a terrific outdoor observation deck with a stupendous view of the gorge. This undersold attraction about energy generation has caused more than one light bulb to go on, and it's solidly memorable. 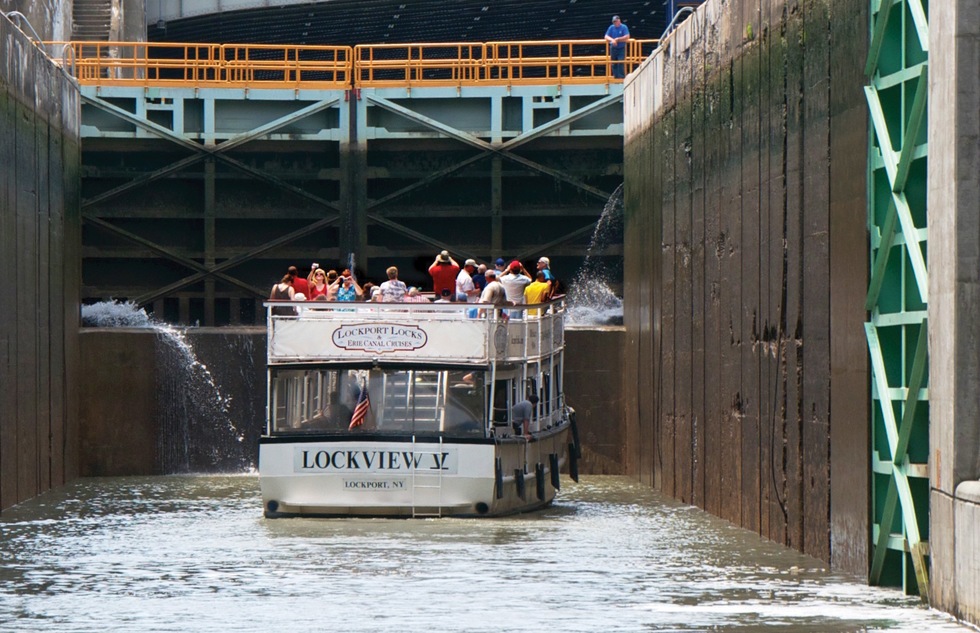 The 1825 opening of the Erie Canal, which connected the Atlantic Ocean to the Great Lakes, supercharged the success of America. This two-hour, positively tranquil tour makes our short list of must-see area attractions not just because it shows you that part of the past, but also because traveling on a boat through the locks is simultaneously fascinating and soothing (and kids seem to love it). It's remarkable how much remains from the forgotten heyday of canal travel, from well-preserved dockside warehouses to vestiges of old flour mills to the locks themselves. The experience begins about 21 miles east of the Falls (so you'll need wheels to get there), but the cruise is integral to the history of the area. Lockport Locks and Erie Canal Cruises has been running tours since 1987.

You may also like our feature: 20 Surprising Reasons Buffalo, NY, is Worth Visiting