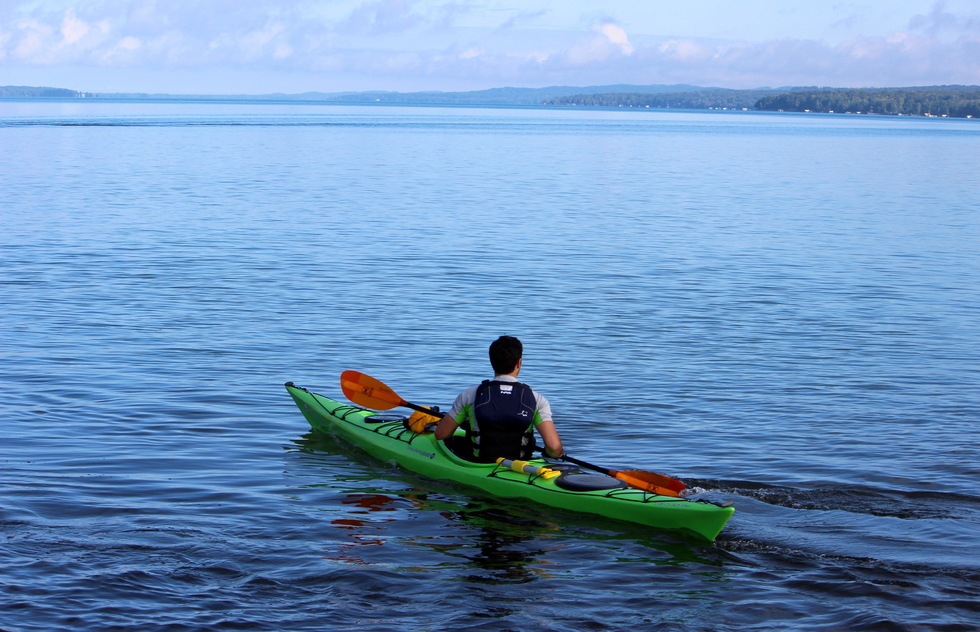 Northern Michigan's Lakes and Rivers: Five Top Ways To Get on the Water

By Pauline Frommer
When you vacation in Northern Michigan, if you don't spend at least some of your time floating—well, you're missing out.

This is, after all, a region defined by its waters. The state of Michigan has some 3,200 miles of shoreline and more natural inland lakes (around 11,000 of them) than any other state in the U.S.A. In fact, no point in Michigan is more than 6 miles from a major body of water—and that's why the state has more boat owners than any other.

So which way should you get wet? Here are a few guaranteed-to-please watery activities, from active to relaxing. 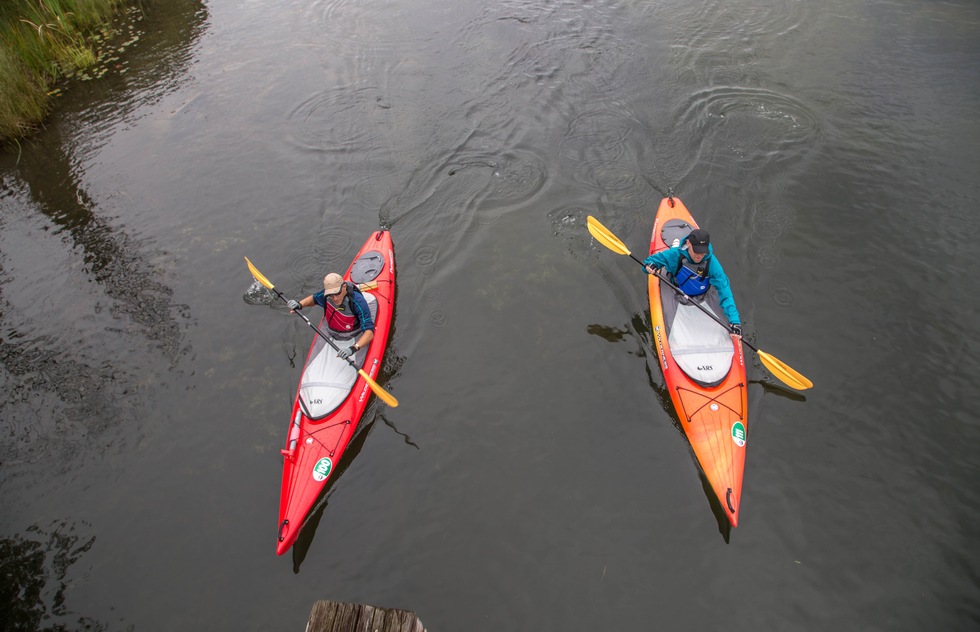 In May 2021, Northern Michigan debuted an unusual resource for kayakers, paddleboarders, and canoers. Called The Chain of Lakes Water Trail, it's one of the country's longest and most professionally managed aquatic trail systems—think of it like a hiking trail, but for non-motorized boats.

Overseen by local nonprofit Paddle Antrim, this is an interconnected system of lakes and rivers stretching some 100 miles, and visitors can do any segment they like. The system is mapped on a free mobile app that not only marks the public access entry points (something that had never been mapped before) but also plots paddlers' specific GPS location so they won't get lost. The app, which works even when there's no phone signal, also suggests which stretches of the trail are best for beginning, intermediate, and advanced paddlers, and gives safety and on-the-water etiquette tips.

Paddle Antrim has erected signs (see below) near all the public entry points so paddlers will always know the right places to launch. Many of these spots were specifically chosen for their proximity to facilities such as public restrooms and parking areas. 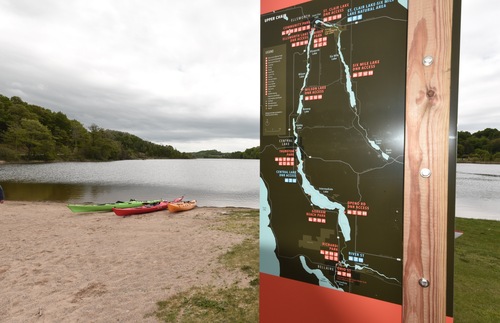 Most importantly, Paddle Antrim is working to conserve these pristine waterways by engaging local communities to keep the shoreline trash-free and maintain high water quality. 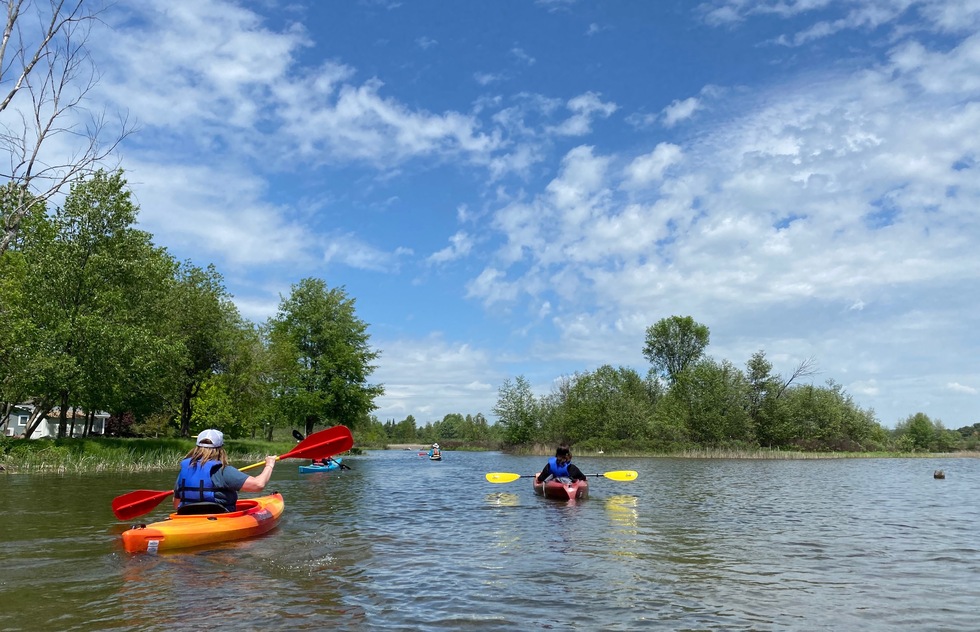 It's easy to rent kayaks, paddleboards, life jackets, and the other gear you'll need to enjoy several hours on the chain of lakes. 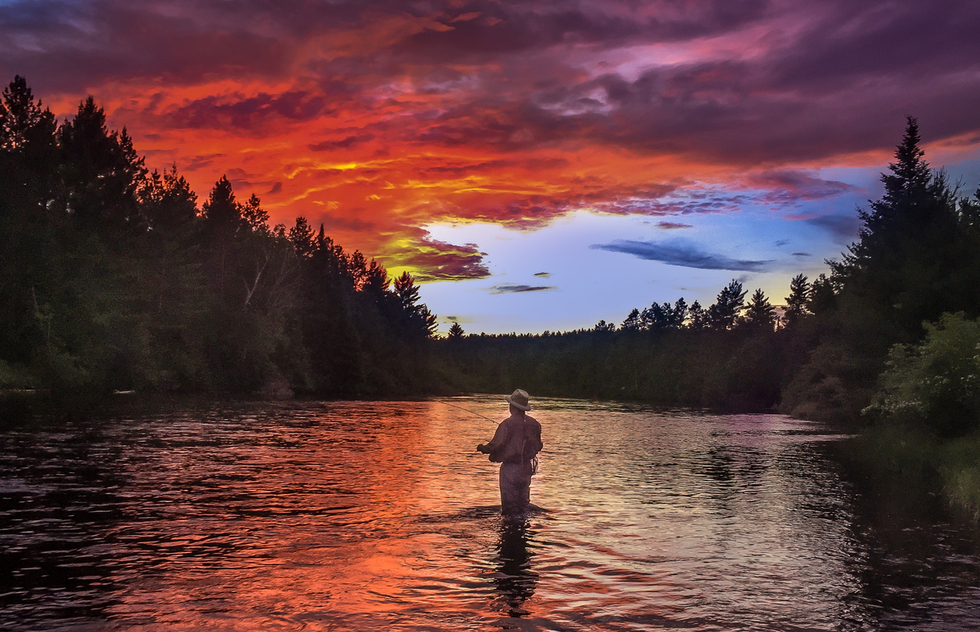 Northern Michigan is home to the Holy Waters, a 9-mile stretch of the Au Sable river considered so ideal for trout fishing that casting a line there has been compared to a spiritual experience. According to experts, there are more than 100 pounds of wild trout for every acre of this part of the river.

In June, the river attracts the largest mayflies in the United States. You might think the arrival of a critter called the Hexagenia limbata sounds like bad news, but these massive insects and their hatching nymphs lure the largest fish to the surface to feed. Human anglers cast their own imitation flies to alight on the water beside the real ones. During the so-called "Hex Hatch" each year, eager trout seekers come to the waters for epic days of fly-fishing.

Tellingly, one often enters this portion of the river from a town called Grayling, a place named for a fish that was once plentiful but is now extinct around here (although you can find some left in Alaska). Cognizant of that fish's fate, a group of anglers founded Trout Unlimited, one of the foremost trout conservation and fishing organizations in the United States. The Au Sable is now designated as a catch-and-release river.

The Holy Waters is arguably the most famous of Michigan's fly-fishing settings, but there are many others. One local angler told me, "I could fish a different river almost every day of summer, have a great time, and not run out of places to go."

And the fish he catches today will live to greet him again tomorrow. 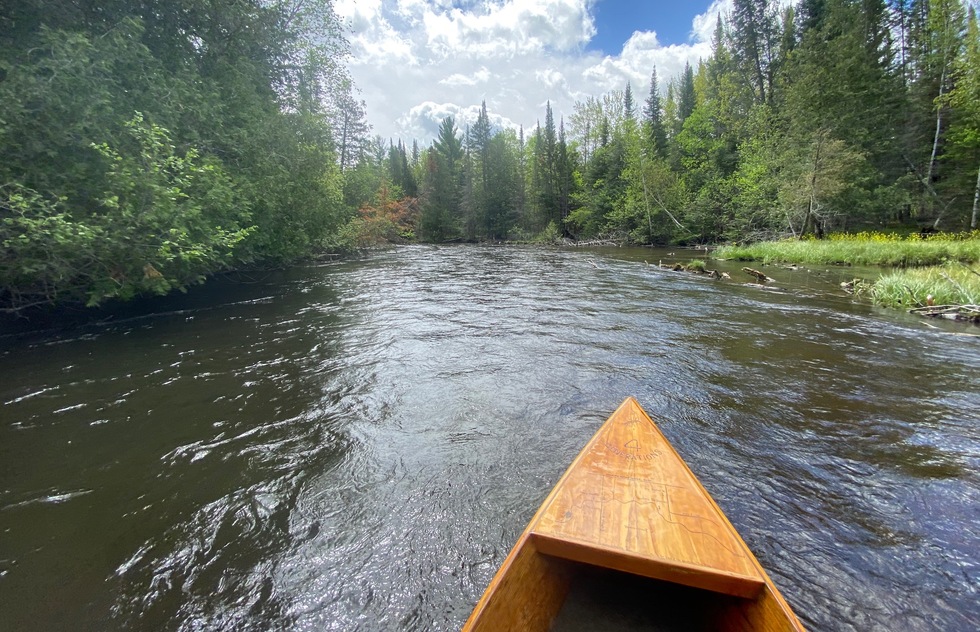 For guided fishing, I can personally recommend Tim Riley of River Valley Adventures. He has a zen composure, a talent for teaching, and the bona fides of an authentic naturalist—he graduated from Michigan State with a degree in fisheries and wildlife and in the winter months he works with the government tagging hibernating bears. Riley ferries anglers around on the handsome, handmade canoe jutting into the photograph above.

For other guides, consult the website Local Fishing Guides. It lists rivers along with the guides who work there and their prices, available boats, and more.

If you plan to go on your own but would like to gather the intel of locals first, consider downloading such crowdsourced apps as FishBrain or FishAngler. Both have helpful interactive maps with lots of stats, and FishAngler in particular has a useful weather guide.

If you're older than 17, you do need a fishing license to cast a line in Michigan. These are available by the season, or even by the day. Generally, if you're planning on spending a few days on the water, a seasonal license will be more cost-effective. 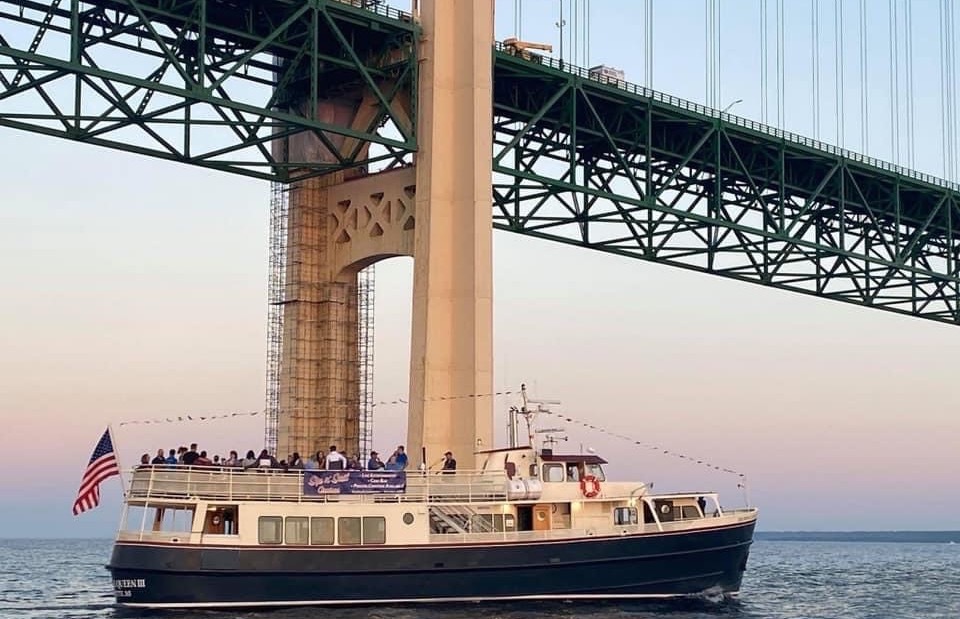 Of course, getting on the water doesn't have to be effortful to be appealing.

Northern Michigan is at the center of the Great Lakes Basin, which accounts for 21% of the fresh water on the planet. Getting on these majestic inland seas, especially at sunset, and especially with a well-made cocktail in your mitt, is a highly civilized pleasure.

Plenty of local outfitters run this sort of cruise, but I'm partial to Sip And Sail, which operates the historic, 1931-built Isle Royale Queen III from Mackinac Island. Several times daily in season, the vessel circles the shore and sails under the Mackinac Bridge (pictured), offering brunch, private rooms, a cushy deck, and a full bar. 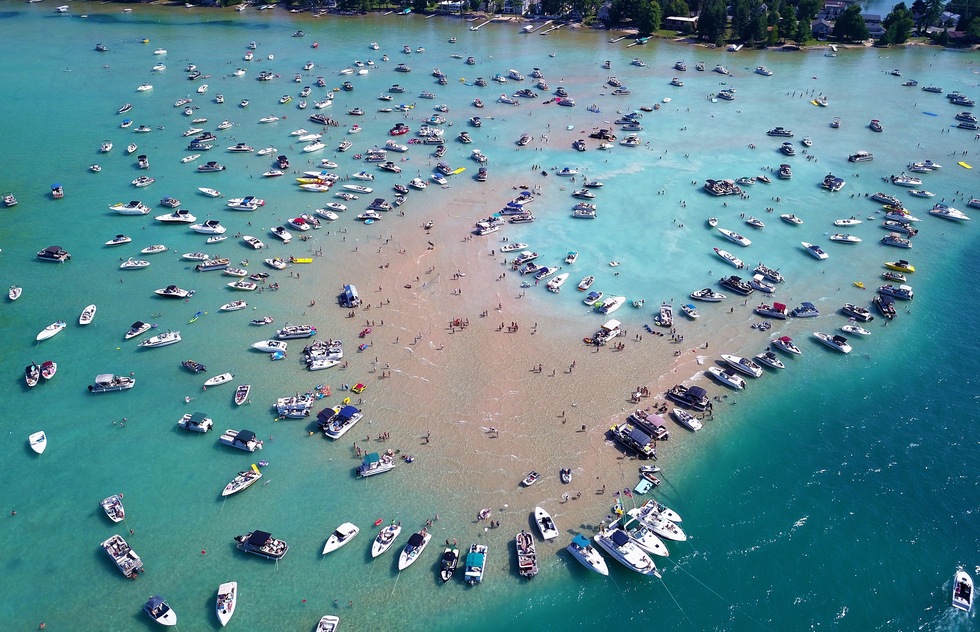 Another View Drone Service/Shutterstock
Partying on a sandbar

Torch Lake is a crystal-clear beaut that, come summer, takes on the colors of the Caribbean Sea. At its south end, the lake hosts one of the most raucous, spontaneous parties in the Midwest.

Every nice day in summer, and especially over the Fourth of July, dozens of boaters anchor off a large sandbar and spend the day sunning, socializing, and sipping. They're joined by folks who come from the nearby shore (there's parking available), and all ages participate.

If you don't want to whip up your own grub, Dockside is a brewery restaurant with the best fried pickles on the planet and places you can tie up a boat if you want to stay on the water. 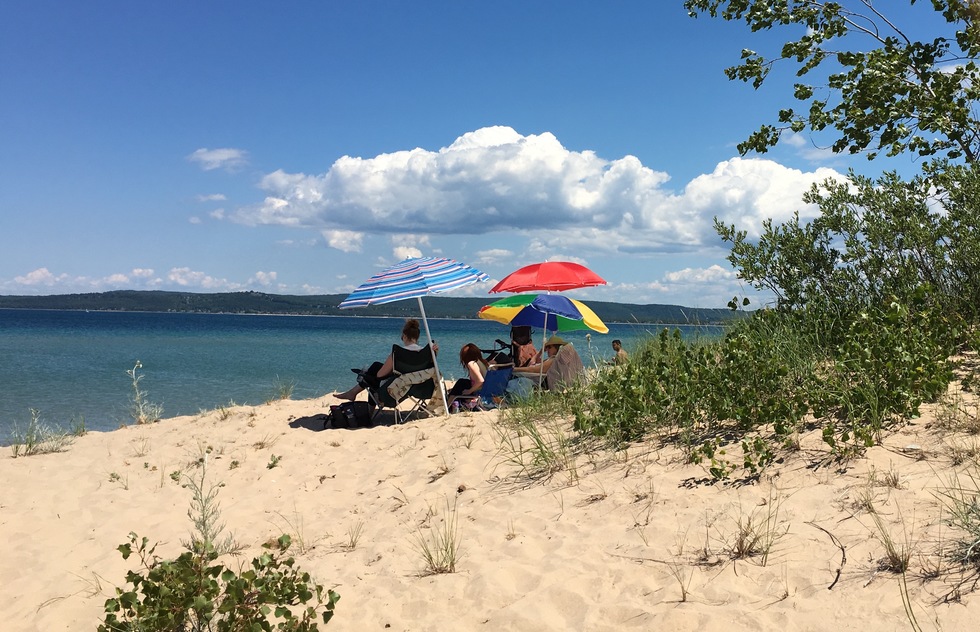 Simply head to one of the region's lovely beaches, step into the cool, clear waters of Lake Michigan, Lake Huron, or one of the other bodies of water, and exhale. Pictured above is a beach on Mission Peninsula, near Traverse City, but your options are endless in Northern Michigan. And that's just one more potent reason to vacation in these parts.


(Pauline Frommer was hosted by the Traverse City Airport, but the opinions here are her own, and this article was not reviewed by any outside source before publication.)
Beach & Water Sports
Family & Kids
Outdoor & Adventure