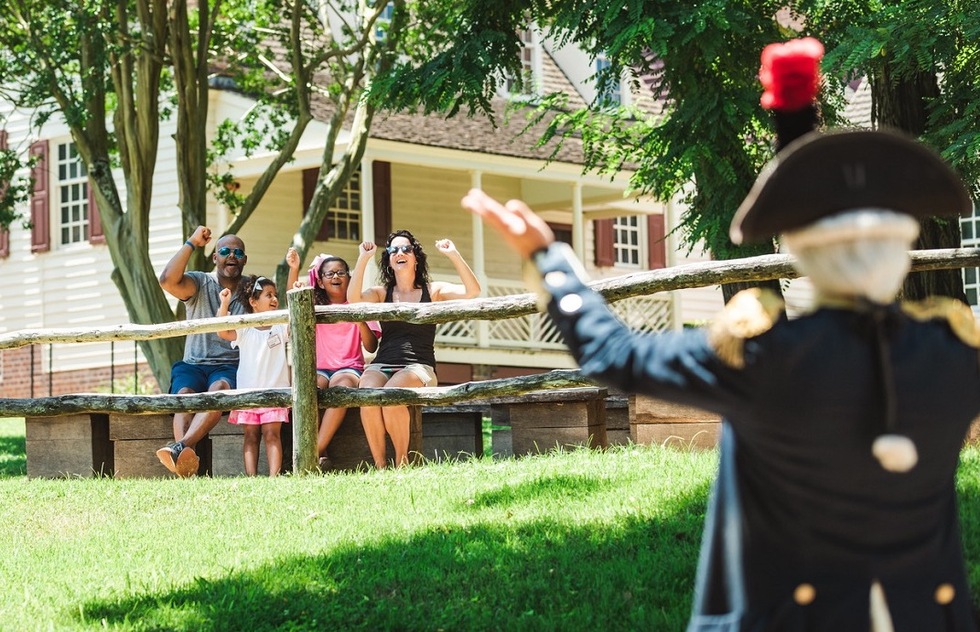 Living history breathes excitement into textbook studies. At role-playing attractions across the United States, you and your kids can feel as if you have traveled centuries back in time to meet Pilgrims, Native inhabitants, Revolutionary War rebels, loggers, and whalers who wear period attire to talk about their lives.

There’s nothing to engage kids in other cultures, past and present, quite like hands-on play. By scrubbing clothes on a washboard, pitching hay, or spinning wool into yarn, children get a feel for the labor-intensive past. Kids can also discover the way apothecaries mixed remedies, what Colonial citizens ate, and how Native tribes fashioned dugout canoes and arrowheads.

We think these are some of the best living history experiences in America. 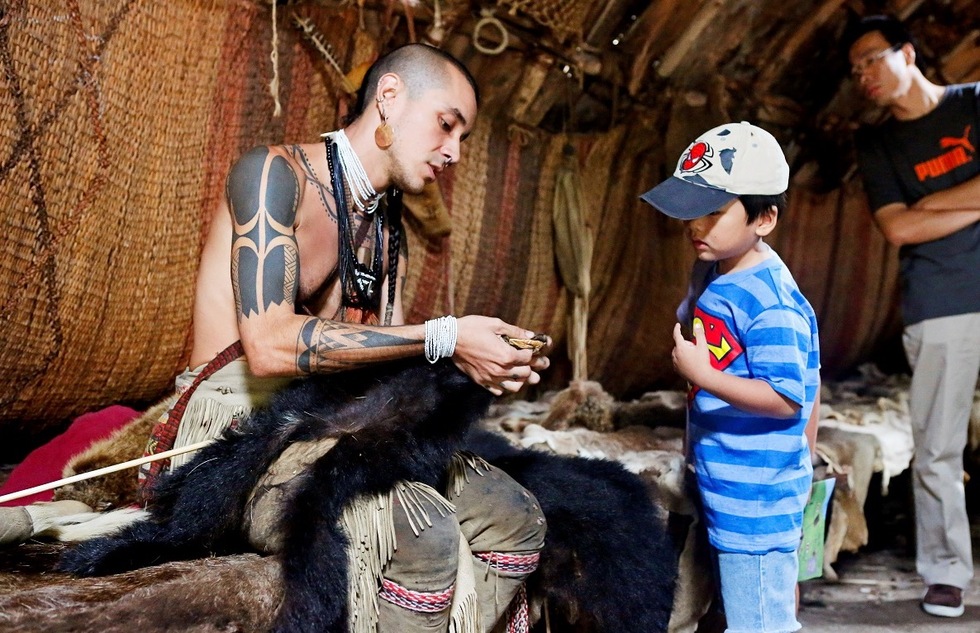 Plimoth Patuxet Museums
Plimoth Patuxet Museums, Massachusetts
Overlooking the deep blue waters of Cape Cod Bay, the English Village at Plimoth Patuxet Museum takes you back to 1627, seven years after the Pilgrims arrived. In thatch-roofed homes along a dirt path, actors in period attire speaketh in 17th-century dialect. A bonneted goodwife might greet you with “well met” and discuss why she chanced her hard journey across the Atlantic: “To gain advantage.”
Kids can try to live like settlers by splitting wood, participating in military drills, and entering a traditional wetu Wampanoag home, where an American Indian talks in modern English about hunting, fishing, and the culture of the people who lived along the coast for more than 10,000 years before the Mayflower arrived. Onboard the replica Mayflower II, guides discuss astrolabes, quadrants, and other early navigational techniques and tell you how 102 passengers, some 35 crew, and scores of animals crammed into the vessel to journey to a new life.
Open: March through Thanksgiving 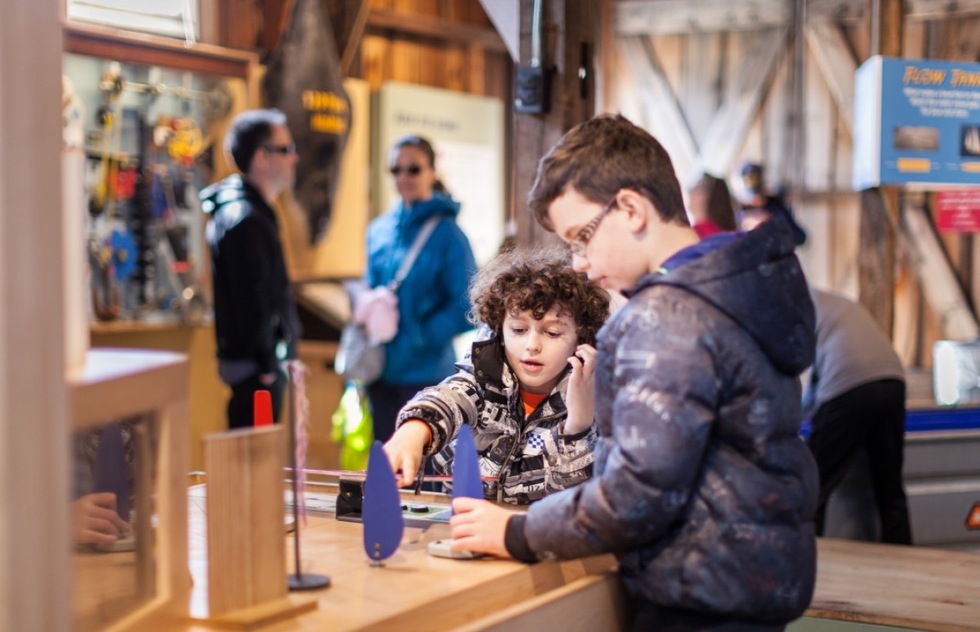 Mystic Seaport Museum transports kids to the 19th century, when Mystic bustled as a shipbuilding and whaling center. Peer into shops of a sailmaker, cooper (barrel-maker), shipsmith (ironworker), and dozens of other denizens of wharf life on a stroll through Seaport Village’s 1800s-era buildings.

At the docks, kids get their first looks at an oyster sloop, a lobster boat, a steamboat, and other historic vessels, and aboard the 1841 whaler Charles W. Morgan, it’s easy to imagine cries of “thar she blows!” as interpreters describe how crew converted whale blubber to the liquid gold of oil. At Home Port, the family activities center, build toy boats and read stories or get out on the Mystic River with a guided cruise or on a rented rowboat, sailboat, or pedal boat. 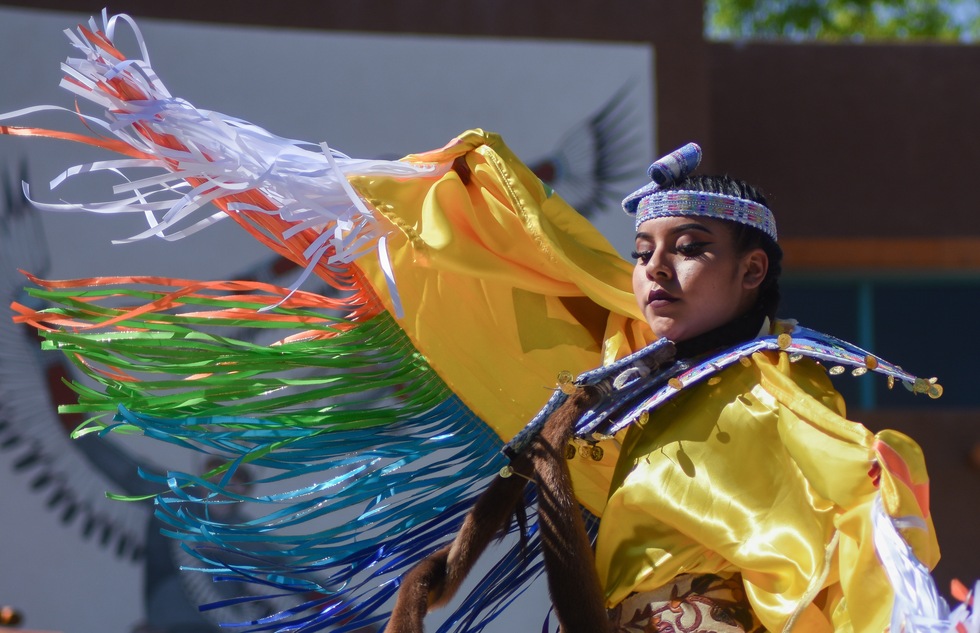 The museum’s pottery, blankets, jewelry, and interactive exhibits (hear “hello” in different Native languages) tell the Pueblos’ stories. One example: Pueblo Indians turned cacao into chocolate for ceremonies and later on used the delicacy in food. Try plates of cured salmon, quinoa and dark chocolate and other modern takes on Pueblo cuisine at the Indian Pueblo Kitchen, open for breakfast and lunch. The gift shop sells bracelets, necklaces, pottery, and other authentic Native crafts. 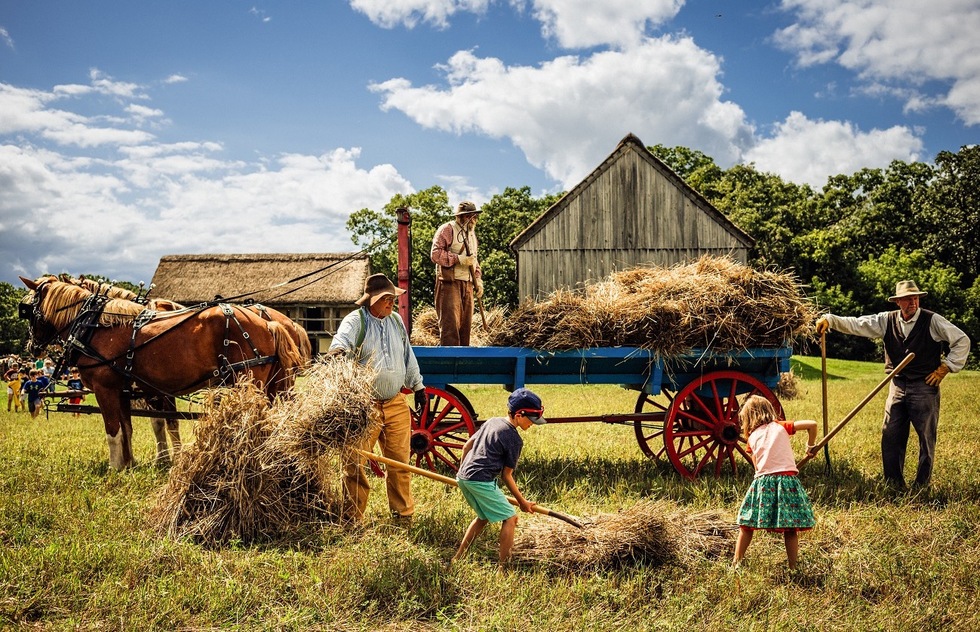 Scrubbing clothes on a washboard, churning butter, and pitching hay are some of the diversions that immerse kids in rural life at 600-acre Old World Wisconsin in Eagle, where the farms have chickens, cows, pigs, sheep, oxen, and horses.

Interpreters at many of the 60 historic buildings, which date from the 1840s to the 1910s, help kids understand the rigors of the lives of the region’s immigrant settlers. At the Scandinavian Homesteads, children sit for a lesson in a one-room schoolhouse and help spin wool into yarn.

Days weren’t all work, though: Families can ride high-wheel tricycles, which were constructed with low pedals so that women’s petticoats wouldn’t ruffle, and watch a period baseball game with 1800s rules—and no gloves. 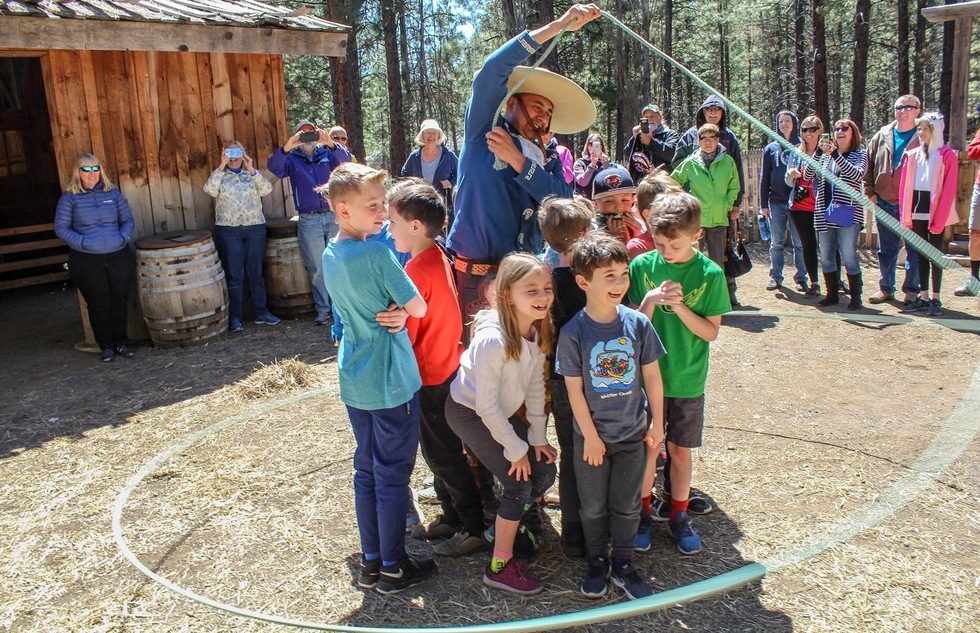 Learn about the early homesteaders, workers, loggers, and American Indians who once peopled Oregon’s High Desert in the state’s central and southeastern region. “Spirit of the West,” the main indoor exhibit at the High Desert Museum in Bend, winds past a Northern Paiute shelter, a fur trader’s camp, an Oregon Trail wagon, and through a dimly lit miner’s tunnel.

In the Desertarium, learn about the tough local environment as you eyeball snakes, tortoises, lizards, and frogs. The 1904 Miller Family Ranch and its Lazinka Sawmill still work—you can watch the mill's blade slice through the timber that was so essential to settlements here. 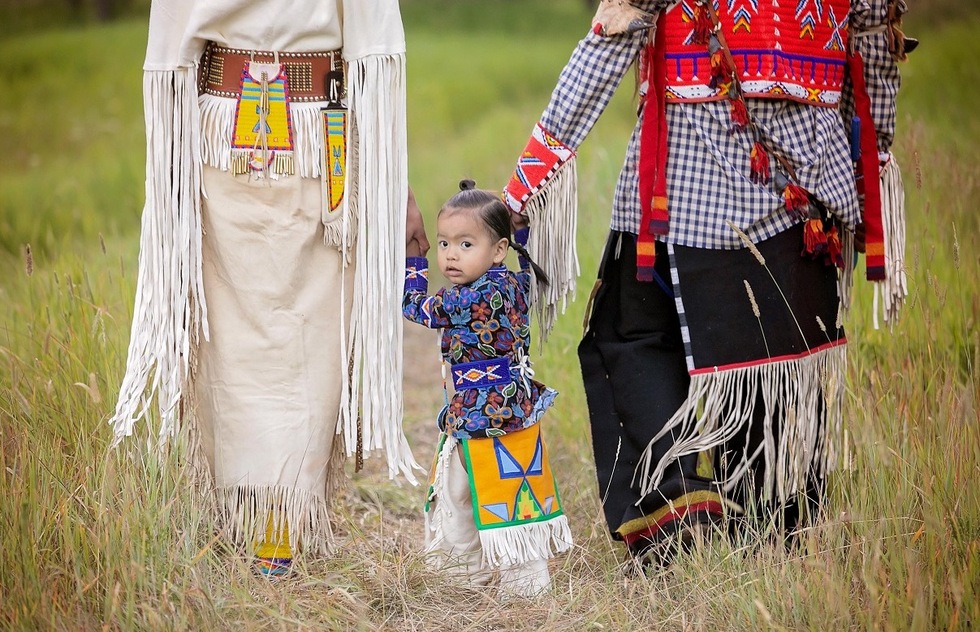 Less a static museum than a program of outings, Nez Perce Tourism in Lewiston connects visitors with tribal members of the Nimiipuu, the Native name for the nation here. Along with the thrills of a Salmon River whitewater paddle trip and the awe-inspiring canyon views on a Snake River jet boat ride, families can learn about the Nez Perce’s unique alignment with the local land and rivers.

On a horseback riding excursion, learn how the Nez Perce were able to acquire Appaloosas, the spotted horses that became synonymous with the West—young children can help brush and saddle them. In addition to hours-long outings, the company’s extended trips are typically between one and three days long. 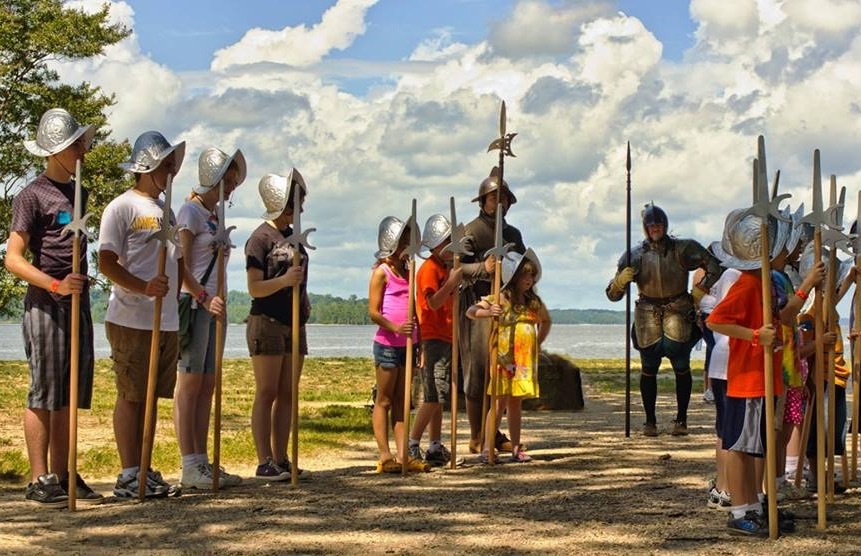 Over several centuries, what eventually grew into America took root in the Virginia Colony between the James and York rivers. Attractions in Virginia’s Historic Triangle—Jamestown, Williamsburg, and Yorktown—bring to life the 17th- and 18th-century struggles that birthed the new society.

An ongoing archeological dig, Historic Jamestowne is the actual site of the first permanent colony in America, established in 1607. By watching a dig, youngsters see first-hand the attention to detail required to unearth history.

Although partially reconstructed, the original fort, which is about the size of a baseball diamond, testifies to the colonists’ tenuous toehold in the New World. Finds from the wells, pits, and other site excavations (on view at the Archaearium) provide clues to the settlers’ lives: thick needles called bodkins that were used to lace cords through corsets, chess pieces and dice that prove not all was work, and a silver ear picker that at least one high-ranking man used to scoop wax from his ears.

Researchers also recovered a mutilated skull and tibia from a trash pit. Nicknamed Jane, the remains are believed to be from a 14-year-old victim of cannibalism during “the starving time” of the harsh winter of 1609–1610. 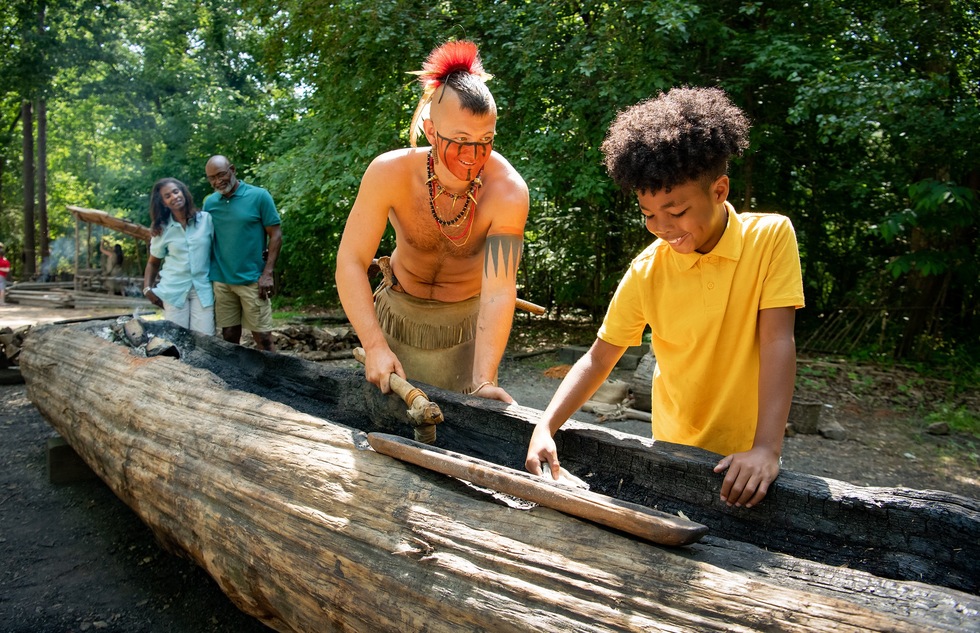 At three living history sites and indoor galleries, Jamestown Settlement in Williamsburg interprets the 17th century by exploring the cultures that met on Virginia’s soil—the English, the Powhatan people (inhabitants of the region for 10,000-plus years), and the Africans brought as slaves in 1619. When Virginia’s capital moved to Williamsburg from Jamestown in 1699, the settlers dispersed.

In Paspahegh town, a Powhatan community, kids help scrape out a dugout canoe, grind corn, and weave reeds into rope. At the fort, watch a blacksmith forge tools and a soldier fire a matchlock musket. By hoisting sails, figuring out latitude with an astrolabe, and hearing tales of arduous sea journeys aboard one of three ships, kids realize the perils and skills required to cross the Atlantic

In the galleries, discover the real Pocahontas, a Powhatan; watch “From Africa to Virginia” to trace how English privateers sold Africans for provisions; and get on the field of the failed 1676 fight against English rule in “Bacon’s Rebellion.” 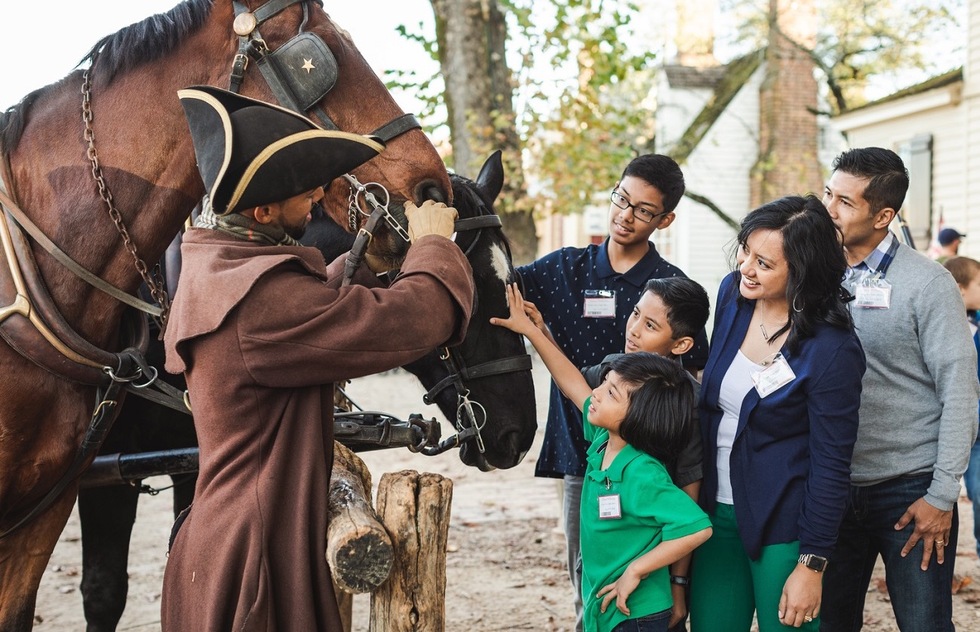 Colonial Williamsburg is the largest living history museum in the U.S: 500 structures on 301 acres re-create the capital of England’s oldest, largest, and richest colony on the eve of the American Revolution.

You never know who you’ll meet: Thomas Jefferson on the Palace Green; Patrick Henry at the coffeehouse; or Kate, a free Black woman, at the Charlton Stage. The Governor’s Palace was built to remind colonists of the Crown’s power; at the Capitol, legislators voted for independence; and visitors can still catch musical performances (with era instrumentation) at the Play House Stage.

Visit with tradespeople who teach you how they engage in the crafts that were necessary for life back then. See how coopers fashioned wooden barrels, how printers set type, and how period pharmacies mixed remedies. At the Courthouse, kids can participate in a mock trial that might result in dunking as a punishment.

But our favorite way to end the day, particularly with older grade-schoolers, is to go on Haunted Williamsburg’s lantern-lit walking tour as Colonial locals regale visitors with tales of strange and spooky happenings.
Open: year-round 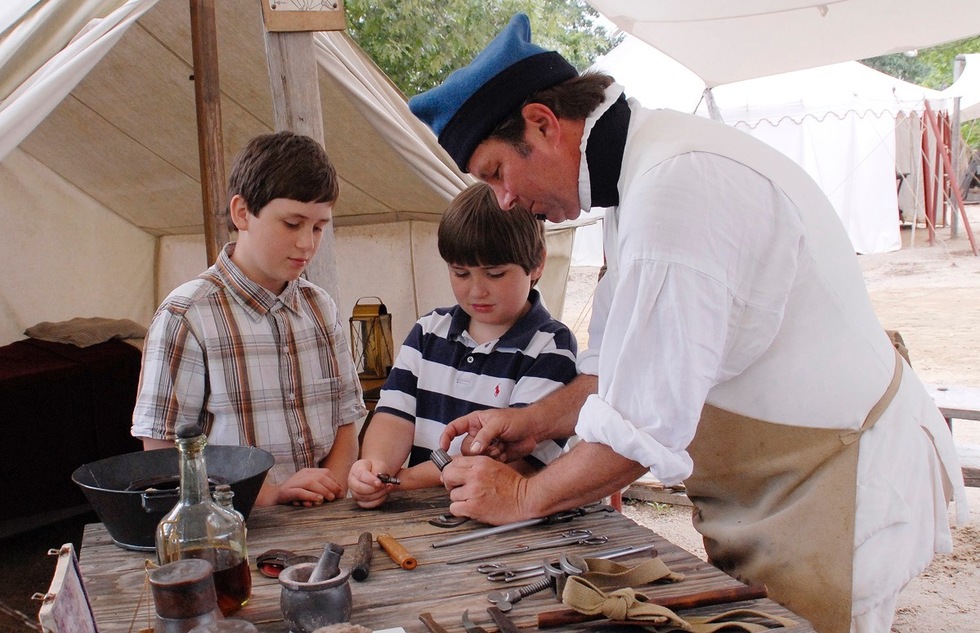 The American Revolution Museum at Yorktown explores the 18th-century fight for independence and the struggle to create a new nation. The multimedia film “Siege of Yorktown” drops you into the fury of the decisive battle: Feel your seat rumble from artillery fire and smell the gunpowder. After kids post their definitions of liberty on a screen, their explanations appear on lanterns hanging from the Liberty Tree. Further exhibits ask kids to ponder what liberty meant for women and enslaved people.

At the Continental Army Encampment, enlisted kids march in military drills, handle 18th-century surgical tools (pictured above), and serve as one of the 10 soldiers it took to ready a cannon for firing.

Once young ones are primed with the facts, visit the nearby Yorktown Battlefield, where the decisive battle in the Revolutionary War actually happened.