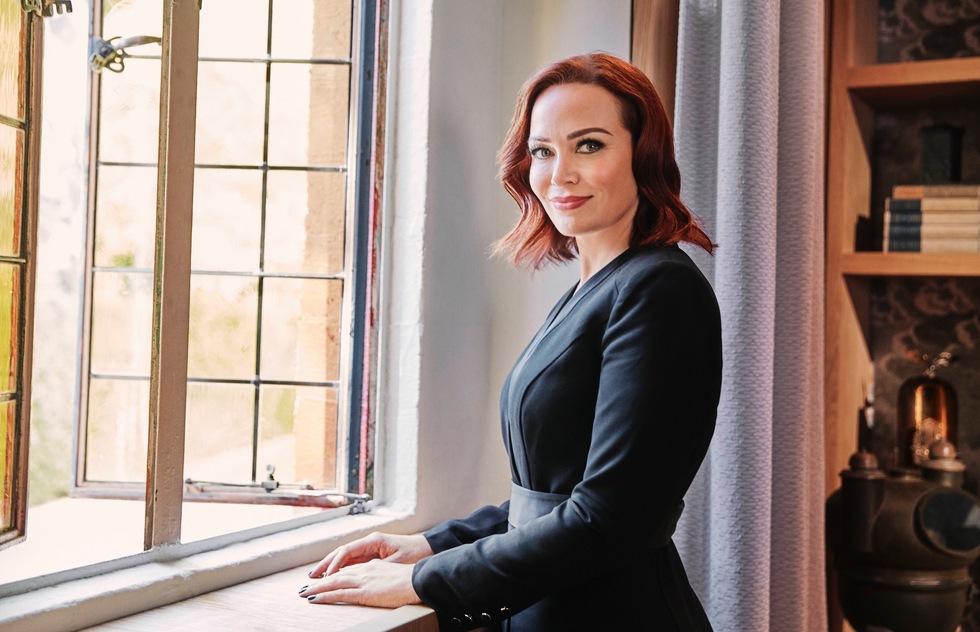 Turner Classic Movies host Alicia Malone is a student of the world, and her main method of study is film.

"I've always watched films to travel," Malone says. "And being from Australia—I grew up in Canberra—I felt so far away from the rest of the world that movies were a way for me to see other places that I thought I might never get to travel to see."

Like many movie lovers, she later became a lover of travel. Since her childhood, she has lived on both the east and west coasts of the United States and explored widely, establishing herself as a leader of a new guard of writers and thinkers working to fill in previously overlooked or neglected aspects of film history.

Since 2018, she has introduced audiences to essential movies in her role as a presenter on the popular TCM channel for uncut and uninterrupted classic film. She has also written two cinematic history books that, although relatively new, are already appearing on the syllabus of many a university film course: Backwards and in Heels: The Past, Present And Future Of Women Working In Film and The Female Gaze: Essential Movies Made by Women.

Malone traces her years of movie-watching in her third book, Girls on Film: Lessons from a Life of Watching Women in Movies, out now.

I asked Alicia Malone talks about finding travel inspiration in some of her favorite movies that were shot in international locations. Here's what she said, in her words. 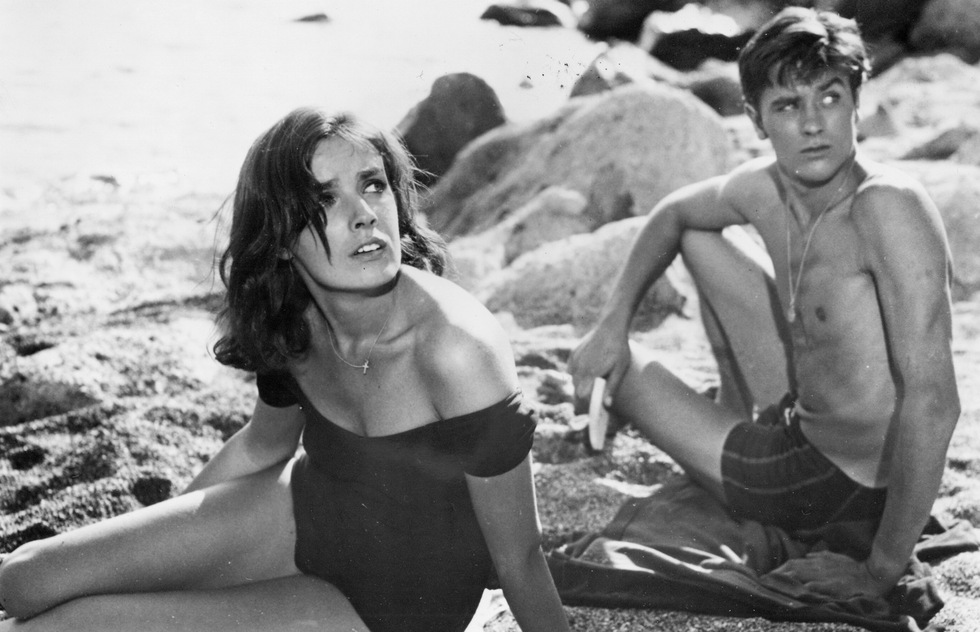 Courtesy of Photofest
Purple Noon (1960)
Purple Noon is such a beautiful-looking film with cinematography by Henri Decaë, who was one of the master cinematographers of the French New Wave. It's not technically a French New Wave film, but a very beautiful and [laughs] disturbing movie to watch, directed by René Clément. People might know the story from The Talented. Mr. Ripley, the movie that came out quite a little while after this, because it's based on the same Patricia Highsmith novel. But the thing that I love about this version in particular is seeing the Mediterranean and Italy in 1960.

Films can be little time capsules. Not only do we get to travel virtually to other countries, but we get to travel to other countries at other times. And to see Italy at this time through my nostalgic rose-colored glasses—so rich, classic, beautiful, a sort of La Dolce Vita life. The character of Tom Ripley, played by the gorgeous Alain Delon [pictured at right], gets sucked into this world that he wants to be part of. You can really see why, because it just looks so beautiful onscreen to be lazing about in the sun, on the beaches, by the ocean and the water. Then, of course, the story takes a rather disturbing twist, but it still makes me want to go and visit.


Throughout my entire life, I've felt nostalgic for times and places that I was never part of, but I wished that I was. Part of the reason why I love watching classic films is getting to go to these places through these beautiful movies. And the cinematography in Purple Noon, I think, is what makes it exceptional. 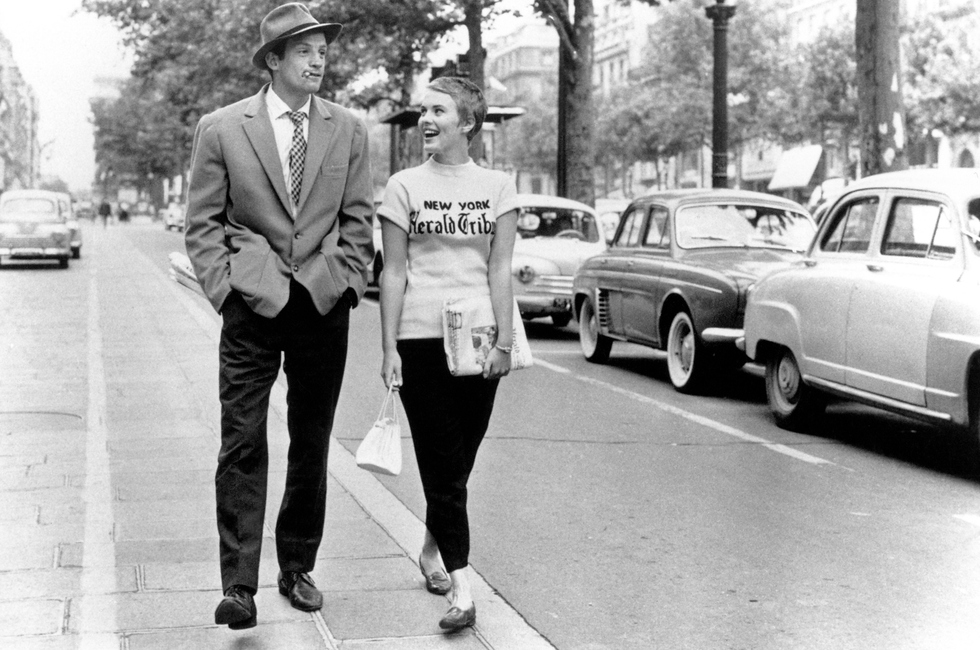 One of the many reasons I love Breathless and continue to love it, apart from the story and the French New Wave, is the fact that it makes logical sense. The route that the characters take throughout Paris is very doable. Some of the locations look slightly different now than they did back then, but we can still walk many of the streets and see where all the events happen, because it all is within a small radius. This is a classic example of a time capsule—1959 Paris—because it was shot on the streets, guerrilla-style. The extras are real people. You can see what people really looked like at that time in Paris, what they were really wearing, and their reactions to the camera as it whizzes by because it was unusual to see filming then.

A lot of these places, if you go to them—and I've been there in Paris and done the walking—have little plaques or little shops that nod to À bout de souffle [Breathless]. Paris still makes the most of those locations, so it can be quite fun to do a walking tour of Breathless. In Paris. I've also done that with Amélie, where I went to crack a crème brulée in the same café where [Audrey Tautou's character] worked, and I've also done a walking tour of Cléo from 5 to 7, the 1962 Agnès Varda film that, again, makes logical sense since it was shot guerrilla-style on the streets. You can actually walk in Cléo's footsteps. 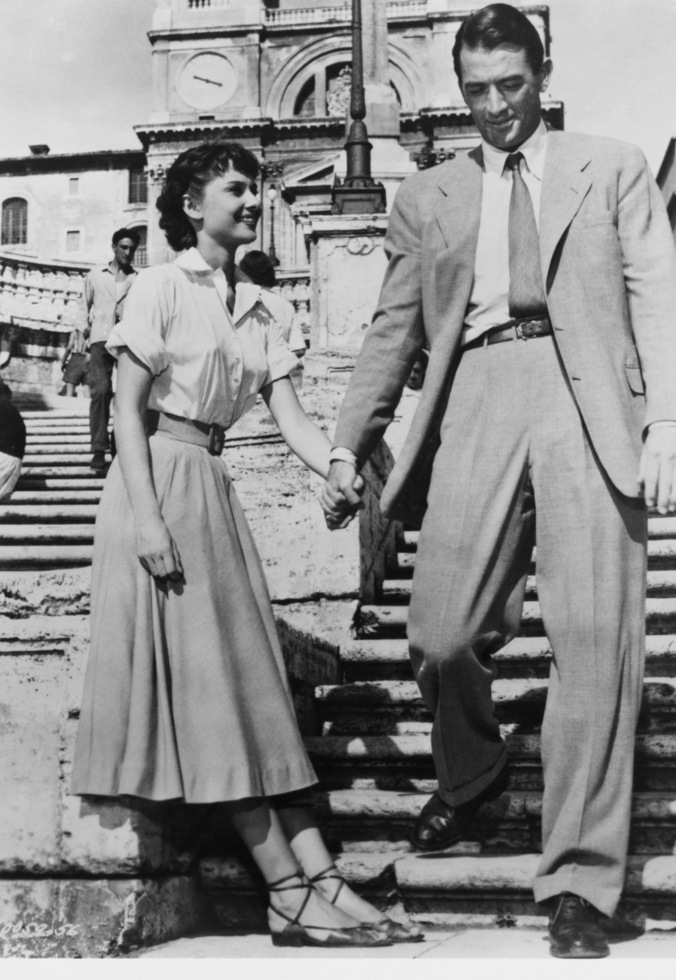 I saw the film when I was quite young, and it cemented in my mind that particular idea of Rome. Again, this is Rome in the early 1950s, but I think it inspired me and countless others to want to go and ride chaotically on a Vesper through the streets of Rome past the Colosseum.

And the great thing about Rome is that not much has changed since this movie was filmed, because of course, it takes place in a lot of locations that are historic—monuments and ruins have been kept and preserved the way they were. So you go to the Colosseum and it looks the same as it did in Roman Holiday. I went on the Spanish Steps and ate an ice cream like Audrey Hepburn did, and I wanted to sit at a café and channel her or channel Katharine Hepburn in Summertime and so many films shot in in Rome and Venice and other parts of Italy.

Roman Holiday captures what I have always imagined to be the Italian way of life. The eating at cafés, the historical parts of the city, the gorgeous men, the Vespers, the beautiful women. I was trying to cut my hair like Audrey, but I didn't think I could pull it off. I love Audrey's outfits in Roman Holiday, by the way. I have definitely emulated that in my life. 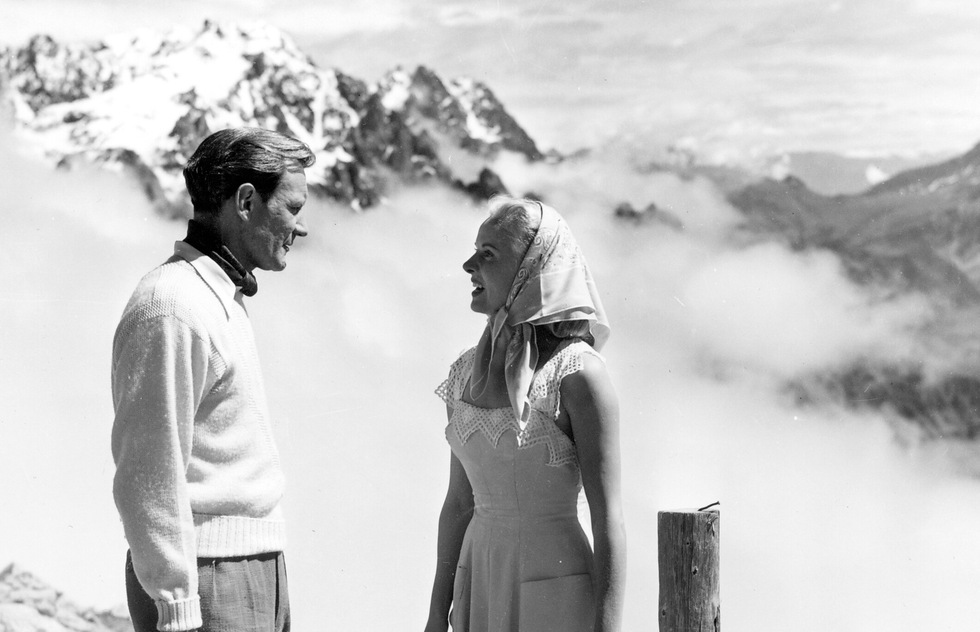 Courtesy of Photofest
The Passionate Friends (1949)

I think [director] David Lean was particularly skilled at being able to use location to help tell a story. We of course know him as being the director of big epics [like Lawrence of Arabia] where he showed his ability of bringing out character amongst a huge story, huge sets, and huge locations. But I also love his smaller films, like Summertime, like Brief Encounter and like The Passionate Friends. It's a movie that doesn't get talked about a whole lot.

It's from 1949, and it's somewhat similar to Brief Encounter in that it's about a doomed love story between these two characters who fell in love, but she wants a man with more financial stability so she marries someone else, but she never forgets the love of her life and they keep meeting up throughout their lives. They realize that they can't be together, but they're still in love. One pivotal scene takes place in Switzerland. Actually, it was filmed in Lac d'Annecy in France, but made to look like Switzerland, with the lake and the mountains. The two characters go for a lovely boat ride across the water and a picnic on the top of the mountain—it really speaks to their romance, and then the possibility of the romance, but then the husband spots them coming back on the boat. Even though noting had happened during their picnic, he thinks the worst, and that sort of spirals her life out of control. I know it was difficult for them to shoot because they had to wait for the weather. But when the sun came out, it was glorious. It's that kind of romantic ideal that you might imagine of a vacation away, of having a lovely day out with someone that you love. It's a really, really beautiful scene. 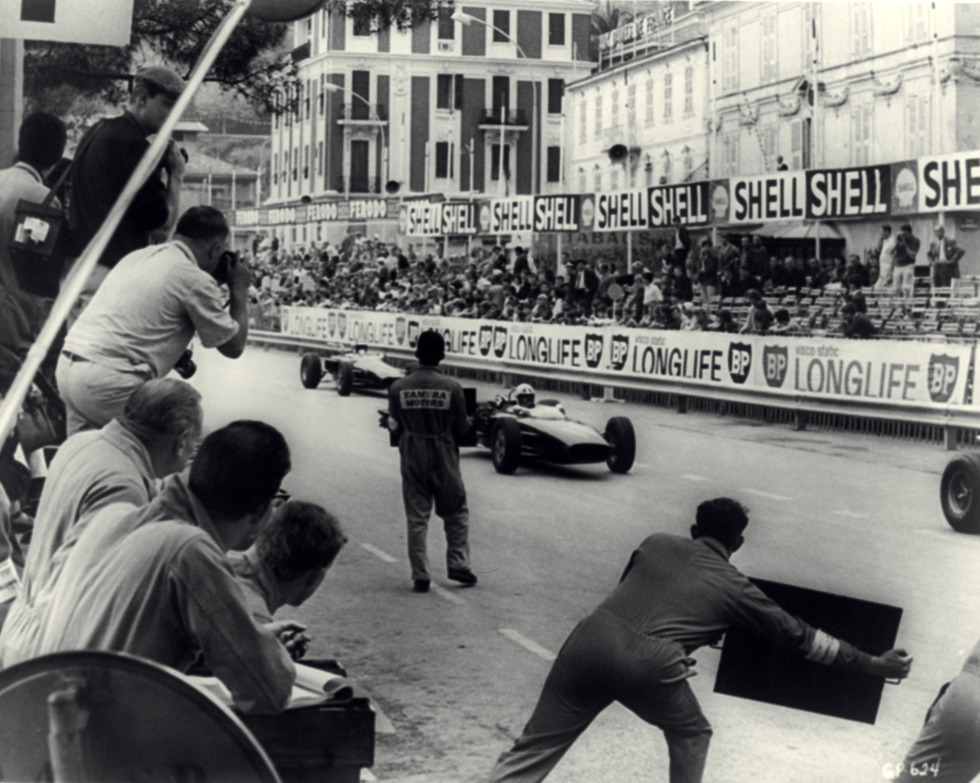 Such an innovative movie. [Director] John Frankenheimer used every tool in his toolbox to bring this story about car racing to life. You've got cameras on the cars, cameras looking at drivers, cameras overlooking the whole race. You travel with these four drivers from different countries to the various Grand Prix races around the world. It starts off in the French Riviera and Monte Carlo, so you get the beauty of the French Riviera, the danger of the sport, and the glamour that car racing has. The beautiful cast is pretty incredible: James Garner and Yves Montand and Toshiro Mifune and Françoise Hardy—talk about a '60s French icon!—and Eva Marie Saint. It's cast with great actors, and it's a movie that makes car racing look exciting, even to someone like myself who doesn't quite understand the appeal of watching cars go around in circles. From what I've seen in Monte Carlo, a lot of those locations are still exactly as they were. It looks the same. Grand Prix is just a very glamorous trip around Europe. 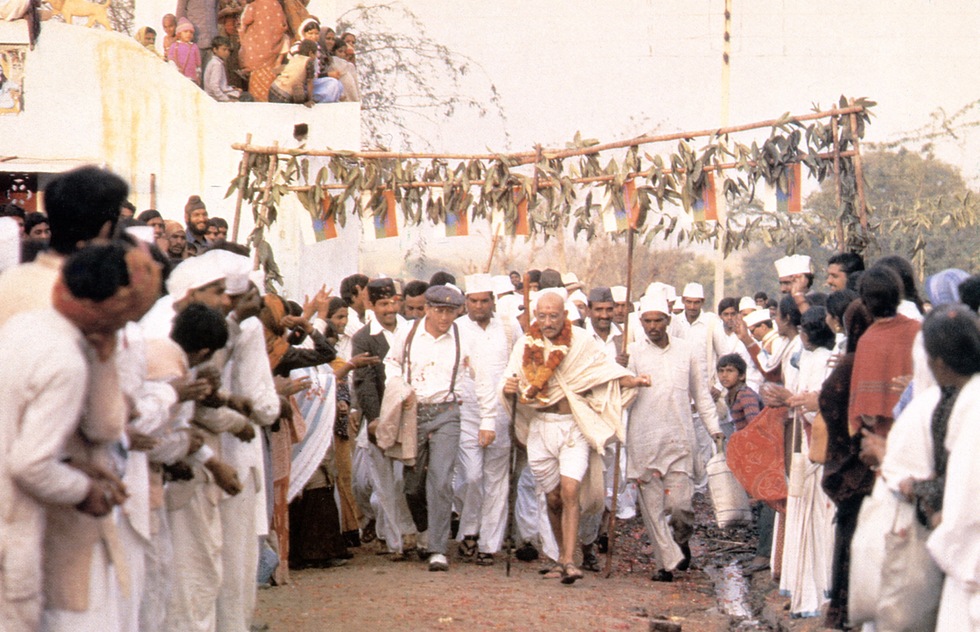 This is a story and a profile of Mahatma Gandhi, who was and continues to be extremely important to Indian people. The film takes place throughout India, in various locations, covering his life until his death in the late 1940s, so they were very careful to shoot in locations that he had actually been to. They wanted it all to be very authentic, so it was great that that Richard Attenborough, the director and producer, found Ben Kingsley, whose father was Indian. They were originally thinking of using a white European actor to play that role, so they were glad they were able to be somewhat authentic. He, of course, did everything he could to look the part and learn about Gandhi.

When they were filming, it was really popular—at one point, they put out a casting call for extras and 300,000 people showed up. They wanted to be a part of it. I think they also wanted to have a look at what Sir Ben Kingsley looked like as Gandhi, and many people spoke of the fact that it was like seeing Gandhi's ghost because the resemblance was uncanny.

I really believe in the quote that Roger Ebert said about movies being like an empathy machine—the fact that we can see other people from other places and, through movies, get to experience what they're feeling, what they're seeing, and know that, although we have a lot of differences, we are all the same. We have our same human needs, feel the same love and sadness, and experience the same emotions as each other. I think seeing movies set in other countries made me realize that the world is much bigger than myself.


Alicia Malone is a host on Turner Classic Movies. Her latest book is Girls on Film: Lessons From a Life of Watching Women in Movies.