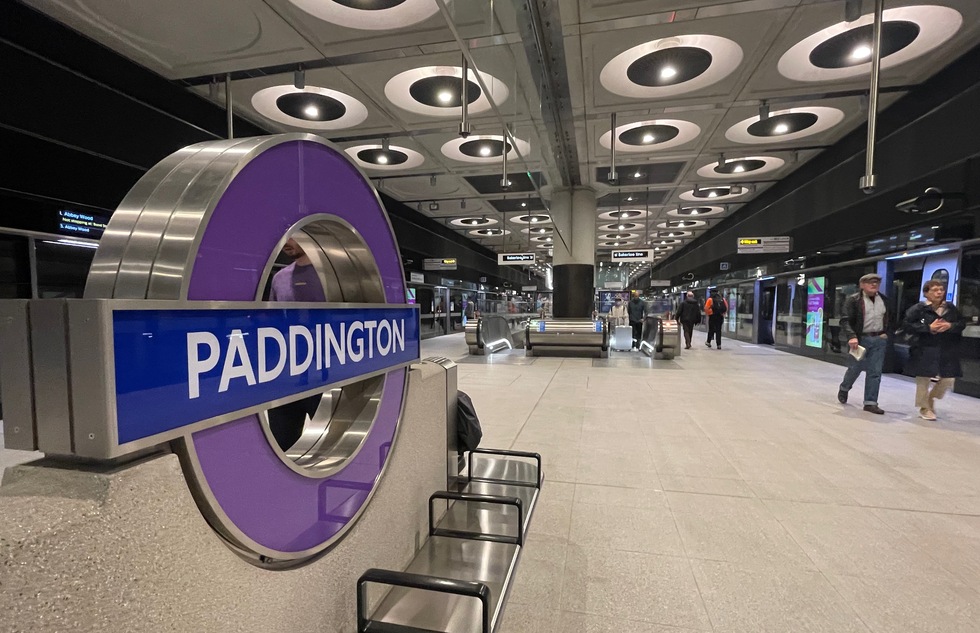 London's Gorgeous New Elizabeth Line Is Open! How to Use It for the Airport and More

London opened the first section of its Underground public transit system in 1863, six months before the Battle of Gettysburg in the United States.

The Tube's original design got a lot wrong. For one, it used actual fume-spewing locomotives inside the tunnels. That was eventually rectified, but core structural missteps couldn't be so easily fixed.

London's train system was mostly designed by profit-seeking investors to bring people to the city's various long-distance railway terminals and not necessarily to get them between other spots easily. Visitors to London have learned with their aching knees that if you want to cross the city on the Tube, the route is likely to be meandering, jammed with staircases, and requiring confusing connections. And in most places, the Tube still crawls exactly as slowly as it did in the Victorian age. It can take an hour to go a few miles.

Ever since the 1940s, Londoners have dreamed of quick, efficient railway service that carved an express path through the heart of the city. They called that dream "Crossrail." On May 24, 2022, after years of delays and a reported £19 billion (US $24.7 billion) in inflated costs, Londoners finally got their Crossrail—the city's first new Underground line since 1979.

What was once dubbed Crossrail has been renamed the Elizabeth Line in honor of Queen Elizabeth II, who marked her Platinum Jubilee of 70 years on the throne in 2022. 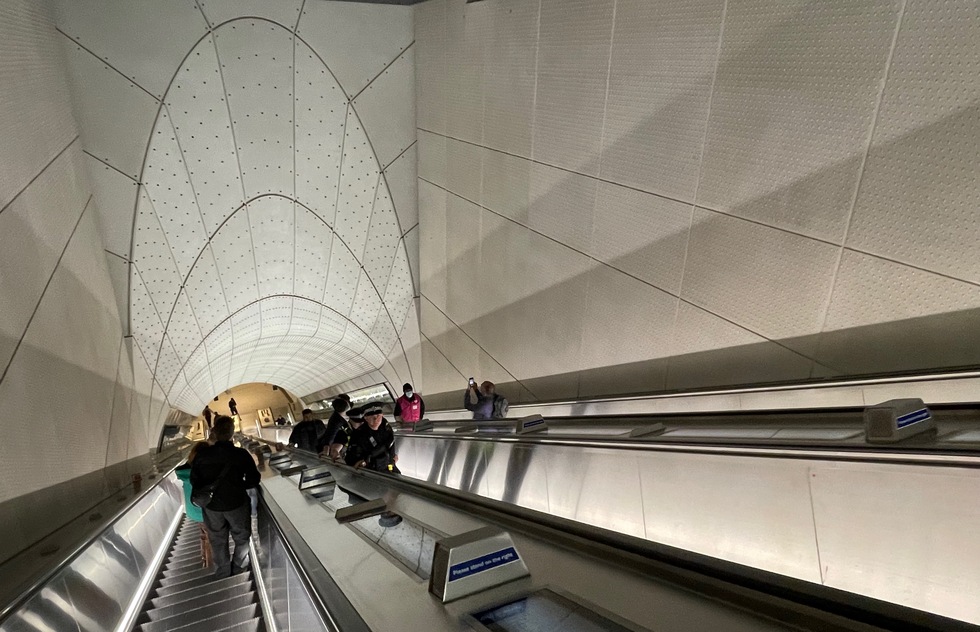 The Elizabeth Line isn't technically another Tube line. It's bigger than that. It's actually a railway line under the city—but that's semantics. The line seamlessly ties in with the Tube network and doesn't require a separate ticket. You can use the Elizabeth Line as part of the same fare whenever it connects with an existing Tube line.

The speed and ease of the new addition, though, are revolutionary. On my first trip in the minutes after it began operating, I boarded at Whitechapel (pictured above) in East London at 9:45am and got off at Paddington station, across town, at 9:58am. That's just 13 minutes—Jack the Ripper could have made a clean getaway before the 10th bell had pealed.

Before the Elizabeth Line, the same journey would have required 45 minutes, two or three different trains, and much struggle with stairs.

But the Elizabeth Line has no stairs, only lifts (elevators) and escalators. There was plenty of space. It was calm and quiet. And the ride cost exactly as much as the Lord of the Rings–level odyssey that was the only option before. 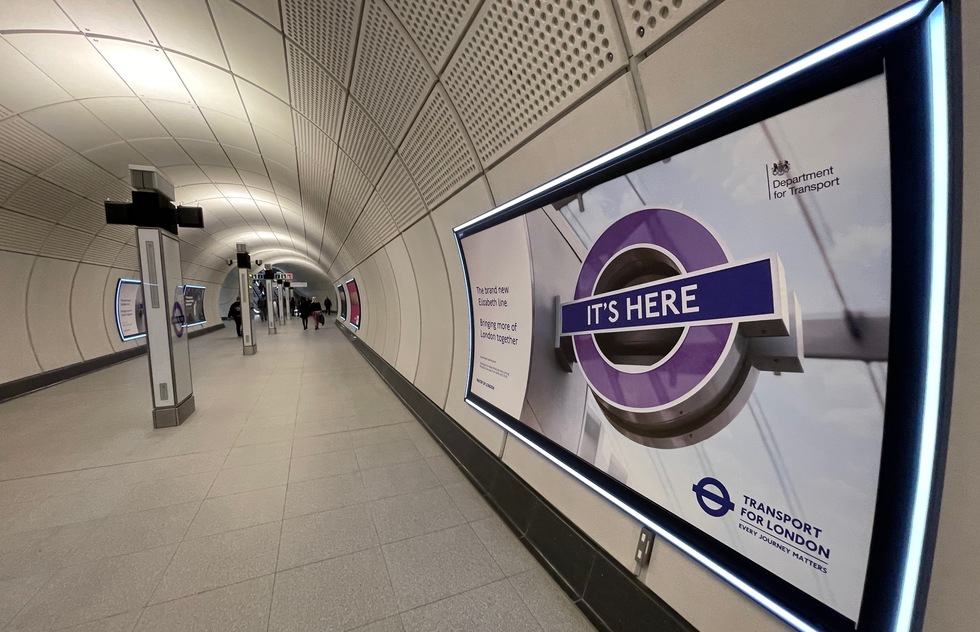 The Elizabeth Line is a game changer for tourists with luggage. Once, the only option from Heathrow Airport was to haul your stuff on an old-fashioned, cramped Piccadilly Line Tube train. That took about an hour and then you had to contend with a warren of tunnels and connections to get to your final destination. In 1998, the Heathrow Express train began running, but even that luxury product still dumps you at Paddington Station, where you have to brave the tangled Tube network to finish your trip.

By 2023, you can board the Elizabeth Line at the stations underneath Heathrow and cross the city without leaving your seat or climbing a single stair. In 2022, as the Elizabeth Line gets rolling, you still have to change trains at Paddington, but you do so via newly built escalators and lifts.

But you can also use the Elizabeth Line to change stair-free for trains to three other London airports: Gatwick (via Farringdon), Stansted (through Liverpool Street), and City (connecting to the Docklands Light Railway—but you have to take two trains—via Canary Wharf or Custom House). Luton Airport can be reached via connections at Farringdon, but the transfer there isn't free. 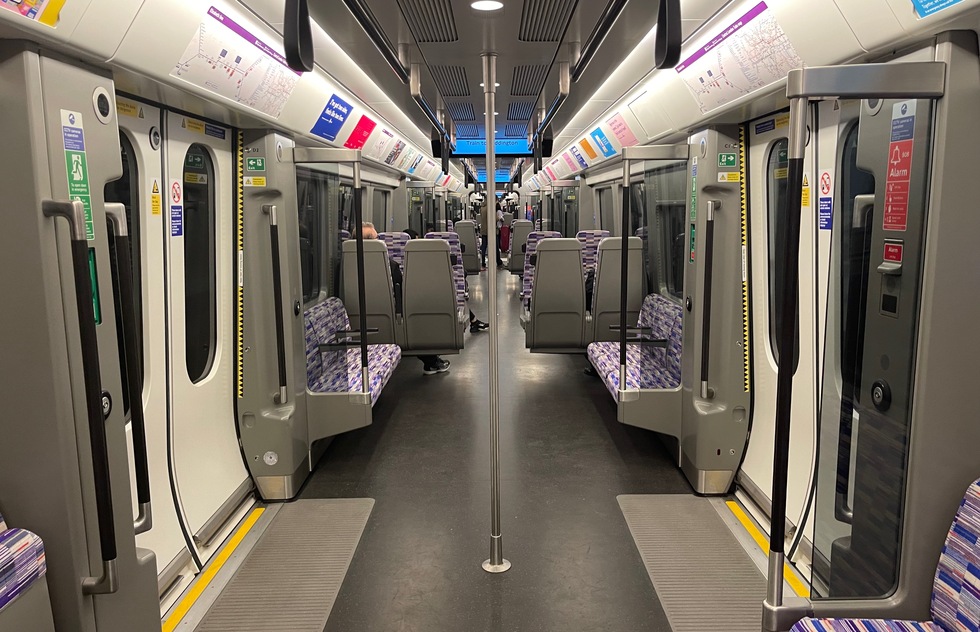 "These trains are incredibly long," one conductor told opening-day passengers. He's right: The trains are nine carriages in length, or equivalent to one-fifth of a kilometer (more than one-tenth of a mile).

That leaves plenty of room for luggage, social distancing, and roaming. The cars are open at both ends, so you can peer down the length of the train as it moves. After you've cleared a curve, the back of the train may still be twisting around in the distance to keep up with you. 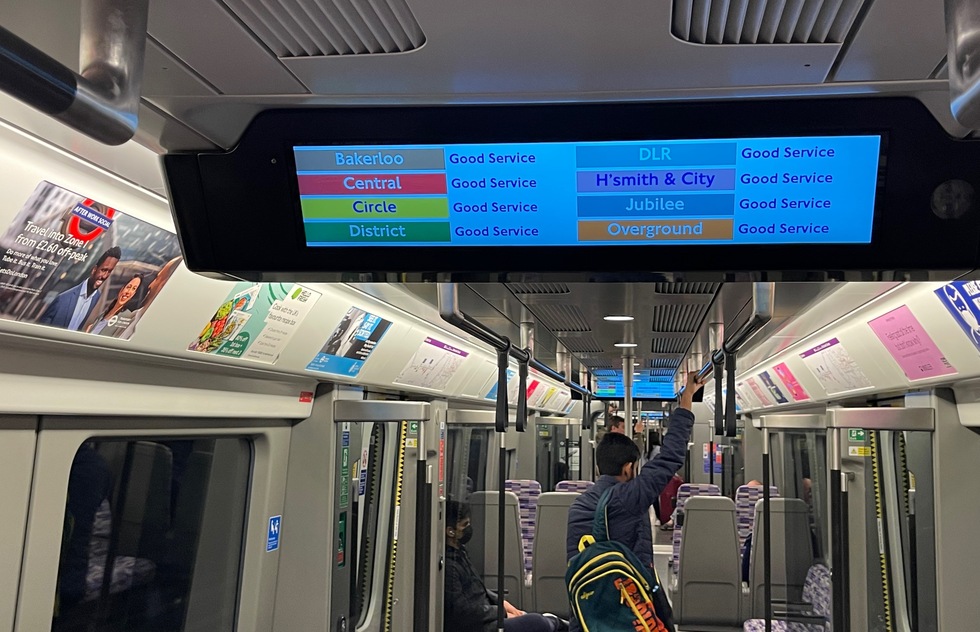 Many of London's Tube train stock hasn't been updated much since the middle of the 20th century. Because most of the old, cramped Underground lines were designed without air conditioning in mind, engineers have had difficulties retrofitting trains for comfort.

But Elizabeth Line's trains were installed with AC on day one. They also have digital screens that tell you your next stop, your train's final destination, and even a rundown of whether the older Tube lines are working at the moment. In a system as old as London's, that's not always a given.

Elizabeth Line trains run quiet, too. That's another luxury in London because antiquated lines like the Bakerloo, which opened in the Edwardian era, can make deafening noises while grinding around ancient metal curves. 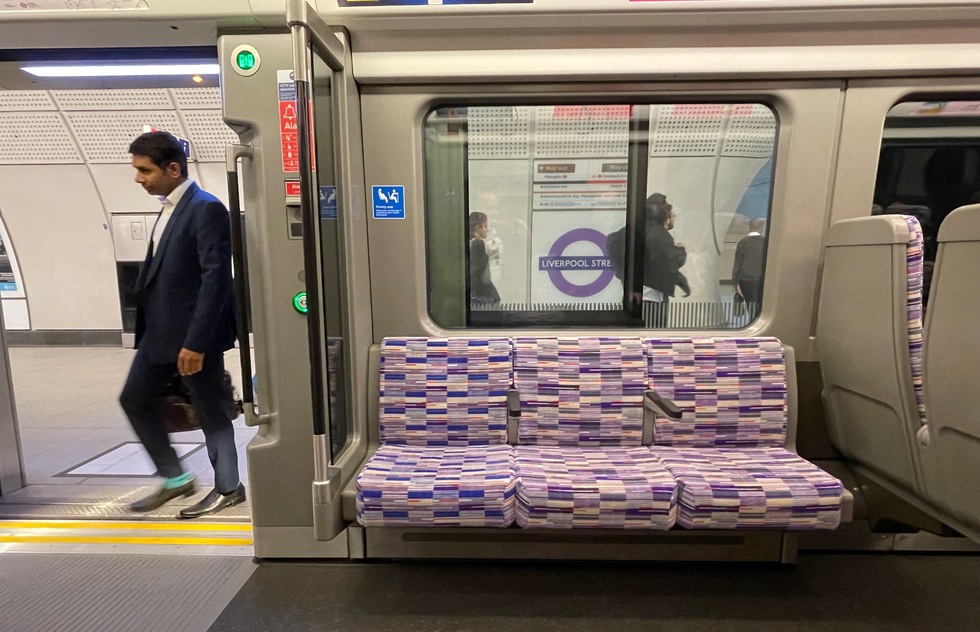 In London, each Tube line gets its own distinct upholstery design. The seat fabric, which is 83% wool woven in Lithuania, is done in regal purples in tribute to Queen Elizabeth II. 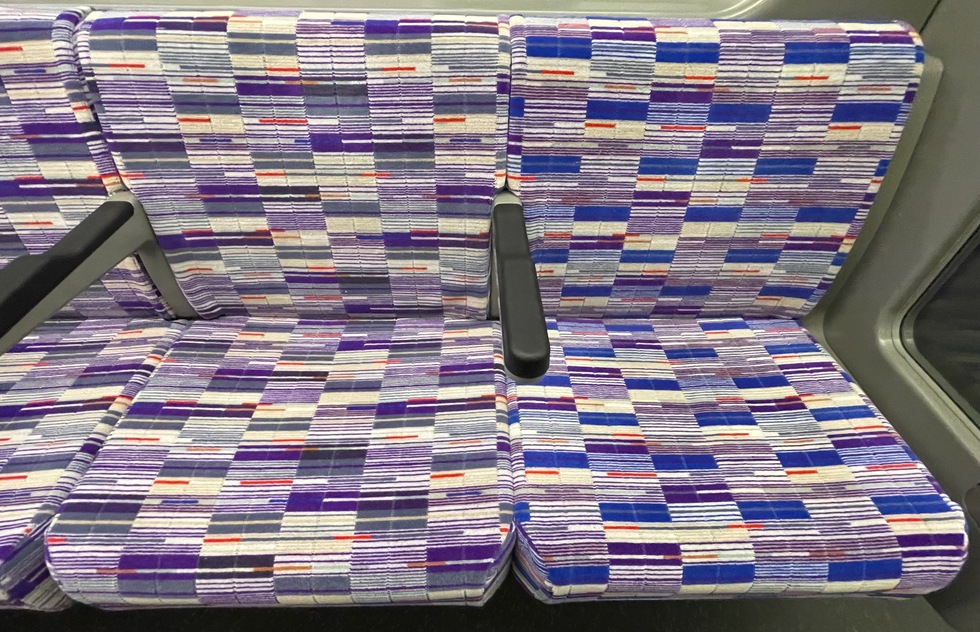 We know you're dying to get a closer look at that pattern. "There’s a lot of trying to make three colours look like five,” one of the designers proudly told the Financial Times. 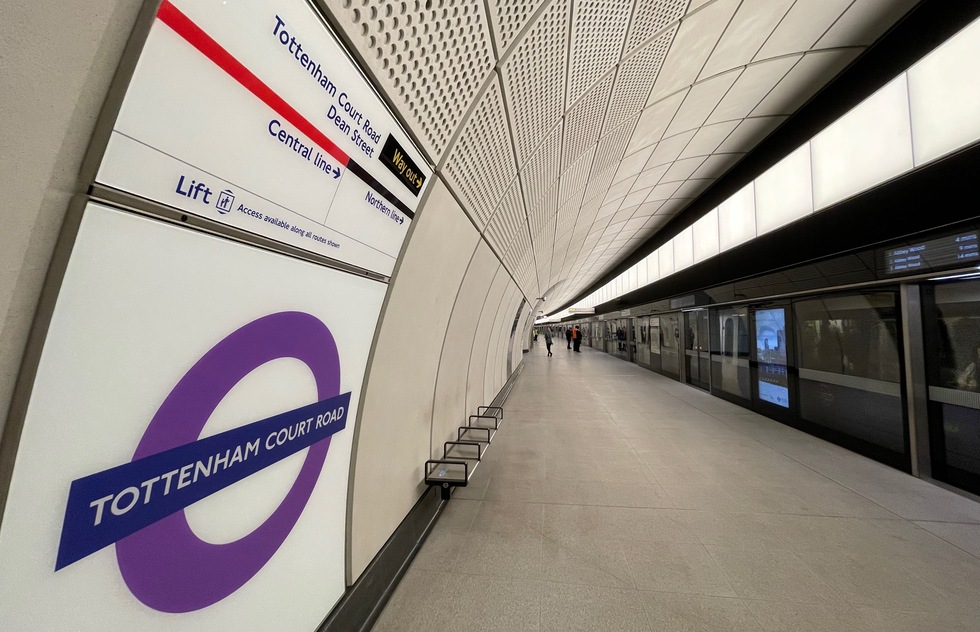 Platforms have plenty of space, some bench seating, and, as with the Jubilee Line extension that handled so much traffic during the 2012 Summer Olympic Games, double sets of doors to muffle sounds and enhance passenger safety. 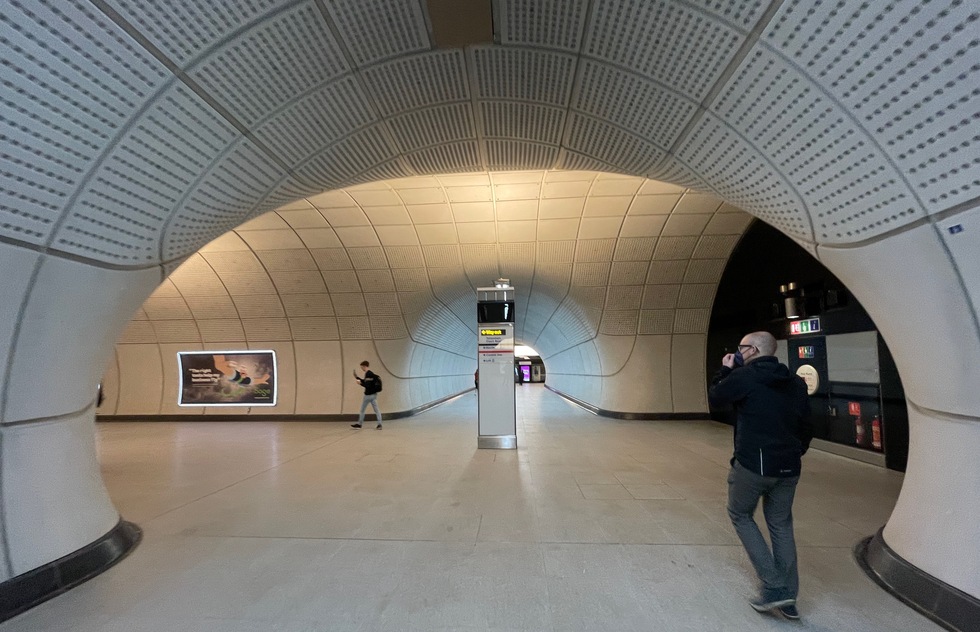 The Elizabeth Line dug some 26 miles of new tunnels underneath London. That's a lot of earth moving, and while you shouldn't expect lots of cathedral-like spaces, the sheer size of the trains means that the transit and waiting areas are still plenty roomy.

I like how the design of the Elizabeth Line takes the iconic rounded, burrowlike corridors of the old Tube and bends the form to be more commodious, inviting, and less claustrophobic.

The Elizabeth Line's stops were grafted onto existing Tube stations. A few connections between the old and new have been smoothed with long escalators and corridors, but the technological and energetic shift between the products of the differing eras can be jarring indeed. 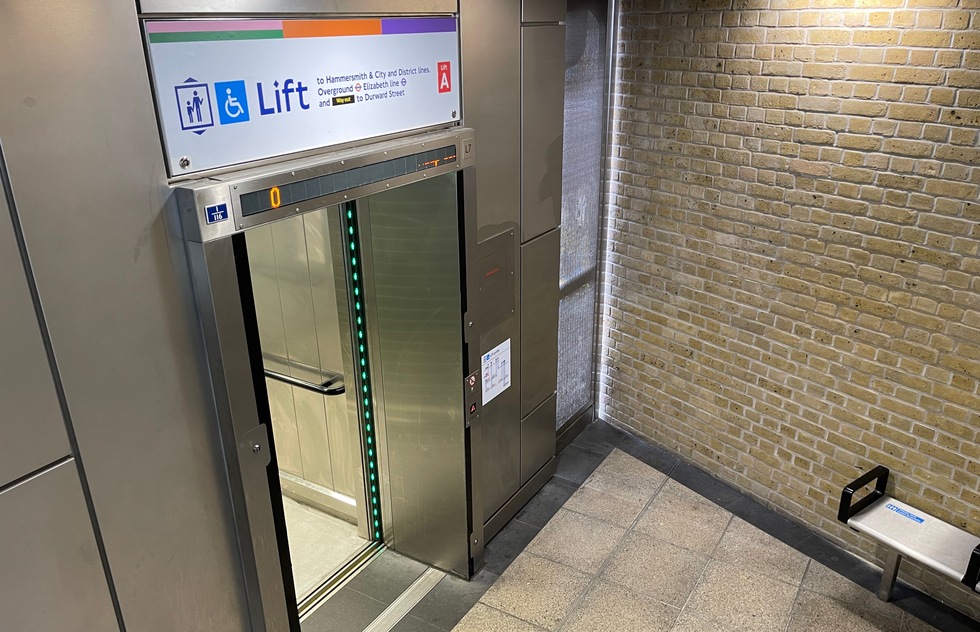 There are lifts everywhere (such as this one at Whitechapel) and there are even more escalators. Every Elizabeth Line station in the center city has step-free access from the street to the train. At Liverpool Street, one of the lifts is more of a funicular that travels at an angle beside a set of escalators.

The Elizabeth Line extends for 60 miles outside the city, linking bedroom communities on the west and east sides of London. All of those stations have step-free access from the street to the platform as well. (Every stop except Ilford, that is, but that's expected to change.)

Again, the lack of stairs is great news for tourists with luggage. In fact, anyone who seeks stair-free access should now look for hotels in the areas around Elizabeth Line stations. 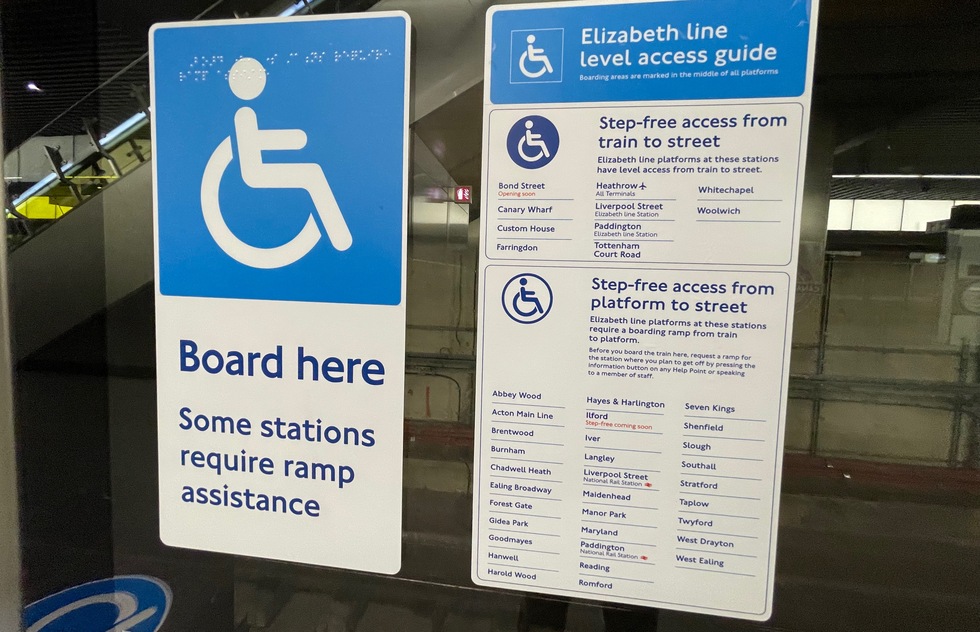 On opening day, this was the access guide for the Elizabeth Line. Specially equipped entrances to the trains are marked with large blue stickers, usually around the middle of the train. 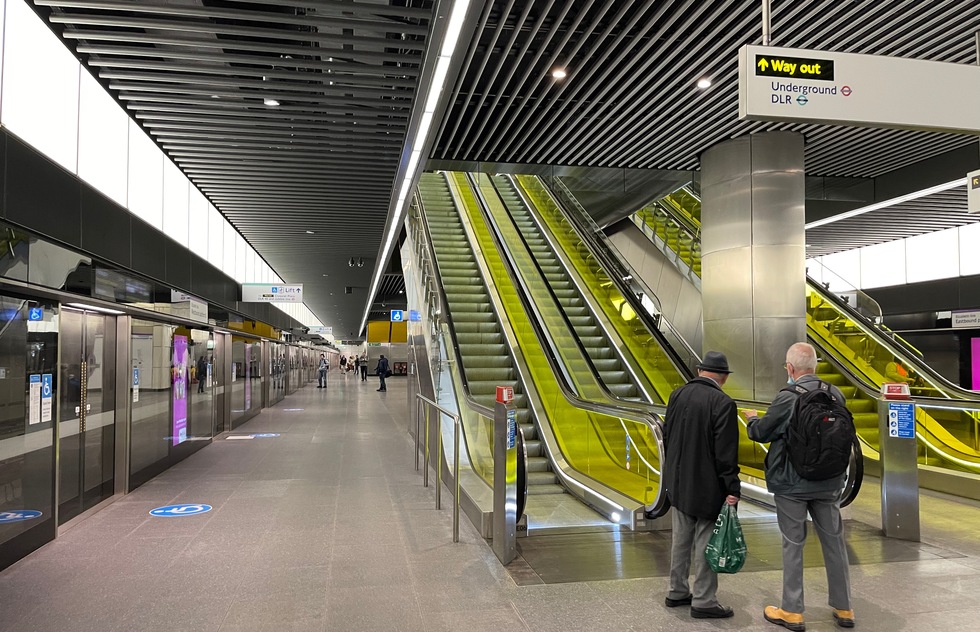 The escalators at Canary Wharf, one of the city's most important business districts, are canary yellow. I'd ask why, but I might have just answered my own question.

If you'd like to see the full Tube map, here's a link to the official version from Transport for London. On the map, the Elizabeth Line is marked in double parallel purple and it runs from the west (left) side through the city to the east. 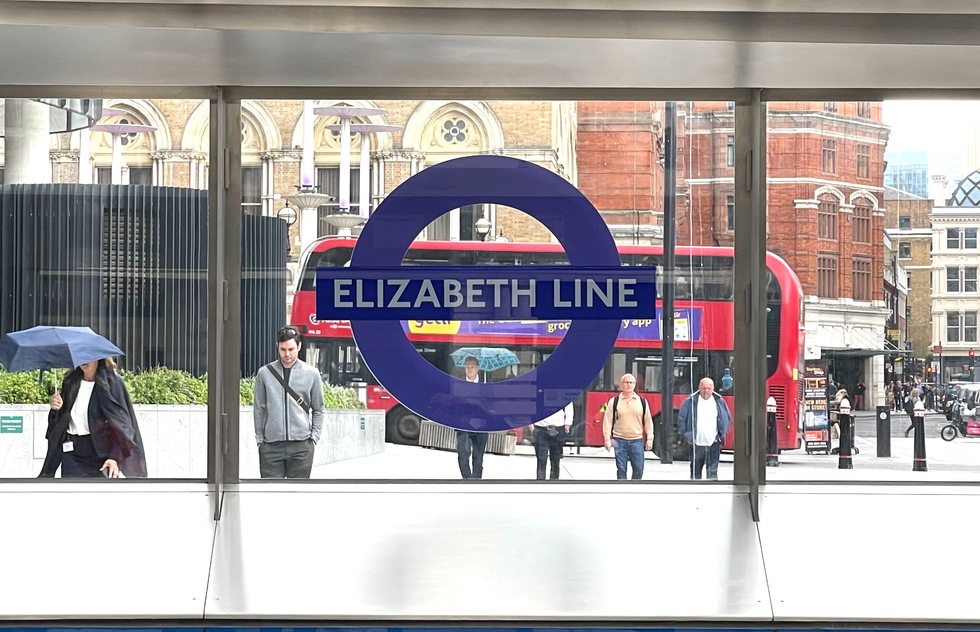 There are 41 stations on the Elizabeth Line, but most tourists will only use these stops in Zones 1 through 3 in the heart of the city: Paddington, Bond Street (scheduled to open by autumn 2022), Tottenham Court Road (for Oxford Street and the West End), Farringdon (for Thameslink trains to Gatwick Airport), Liverpool Street (for the City and trains to Stansted Airport), Whitechapel (for East London), Canary Wharf (for the Docklands), and Custom House (for ExCeL and conventions).

Between those stations, you can connect to nearly all the major existing Tube lines. But once you do, you'll be back to using antique and awkward trains and stations again. They can't all be like Lizzie.