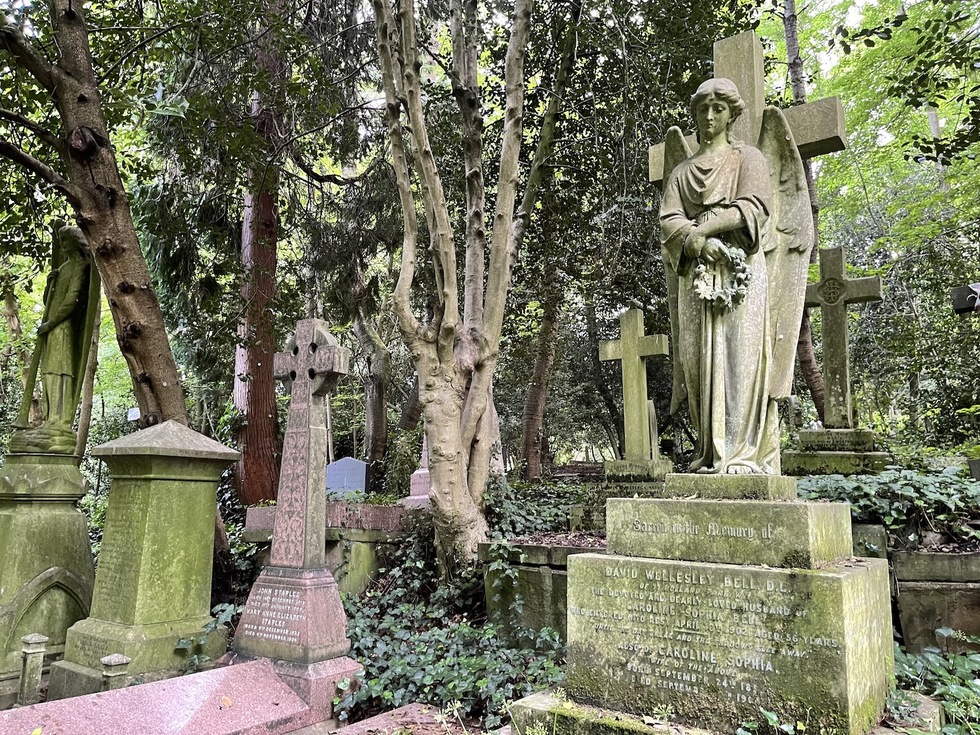 From the very beginning, Highgate Cemetery was built to be a lavish fortress of eternal rest.

Opened with private funds in 1839, at a time when London's population was exploding and its stuffed church graveyards overflowed with revolting scenes, Highgate instantly became one of the city's most civilized burial places. The first residents booked plots to rest among the sweet flower plantings, clumps of evergreens, and grand Victorian grounds. Gates, high stone walls, and a private army of retired soldiers kept the Victorian-era scourge of grave robbers at bay day and night.

But as Highgate filled, profits dried up, and upkeep ceased. By the 20th century, this stately necropolis in North London was as abandoned and overgrown as a jungle ruin. Burial vaults collapsed underfoot and overhead, and vandals ruled the tombs. To control the mayhem, the gates to a majority of Highgate's 36 acres were closed to casual visitors.

And so it was for nearly half a century. But in 2020, an advocacy group reopened all parts of Highgate Cemetery to tourists. The terrifying decay can't be halted, only tamed and monitored, resulting in one of the most fascinating "new" attractions in London that's actually a chilling time capsule of the old world. 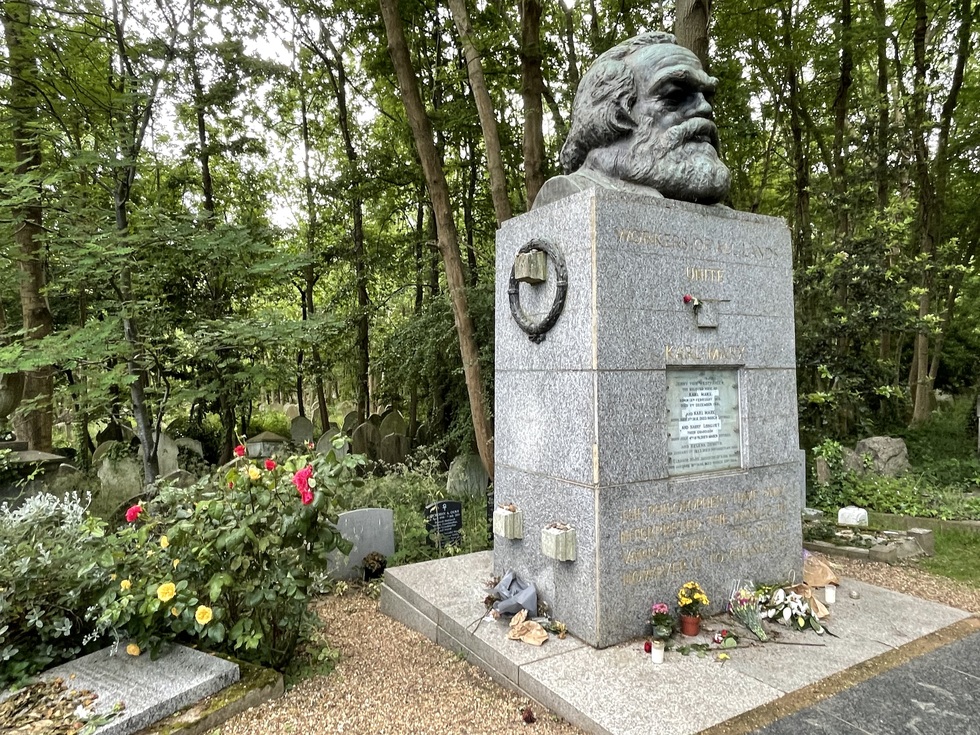 Highgate, where some 170,000 people have been buried, is split into two sections, divided by Swain's Lane, a public road. For most of our lifetimes, only the East Cemetery has been easy to visit. That's where you'll find the final resting place of economic theorist Karl Marx. Marx fled Prussia and lived in the United Kingdom for nearly 40 years in poverty so extreme that four of his offspring died in childhood, likely from complications from malnutrition and disease. In 1883, Marx was buried beneath an unremarkable slab next to his wife’s grave off a side path. His ceremony was attended by only 13 people.

But in 1956, after his writings took on a life of their own, his admirers moved the couple and their daughter Eleanor to a more prominent spot under a bold new memorial. 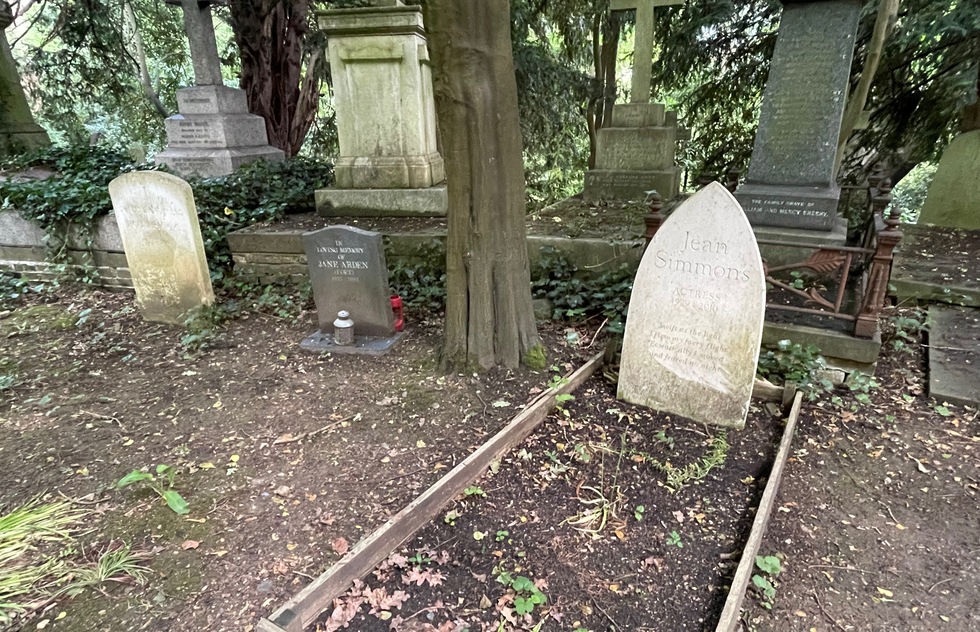 Heading across Swain's Lane, we enter the West Cemetery, which was the original and most elaborately planned section of Highgate. For decades this area was open to select visitors only, but now anyone may enter with a timed ticket or on a guided tour.

One of the most recent notable burials in this section was that of pop icon George Michael, who rests under a clean white stone slab bearing his birth name, Georgios Kyriacos Panayiotou. His grave was off-limits when he arrived here, but no longer. A small sign nearby asks visitors not to take photographs, so I didn't. Instead, I give you the pastoral plot (pictured above) of Academy Award–nominated actress Jean Simmons (Guys and Dolls, The Robe, Elmer Gantry), who lies along a path a minute's stroll south of the Wham! singer. 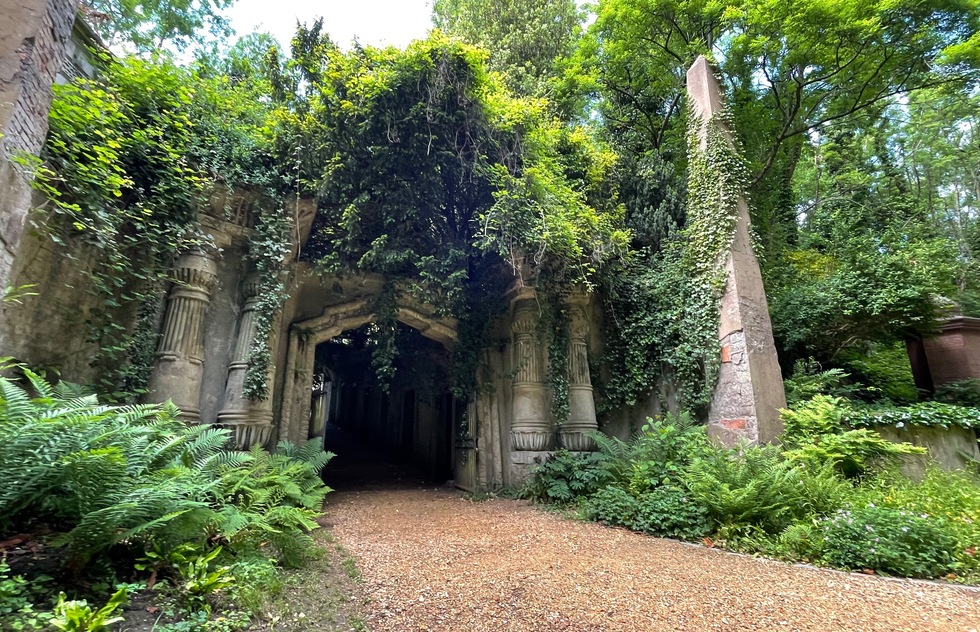 If the East Cemetery is a hymn, the West Cemetery is an opera. When Highgate was built, it hadn't been long since Napoleon's campaign in Egypt had sparked a European fascination with all things Egyptian and funerary. The cemetery's bombastic Egyptian Avenue was the result. Originally, two obelisks flanked the entrance, located in the heart of the cemetery. Entering the dank and overgrown passageway will take all the courage you can scrap up, but press on because there's much more Victorian extravagance beyond. 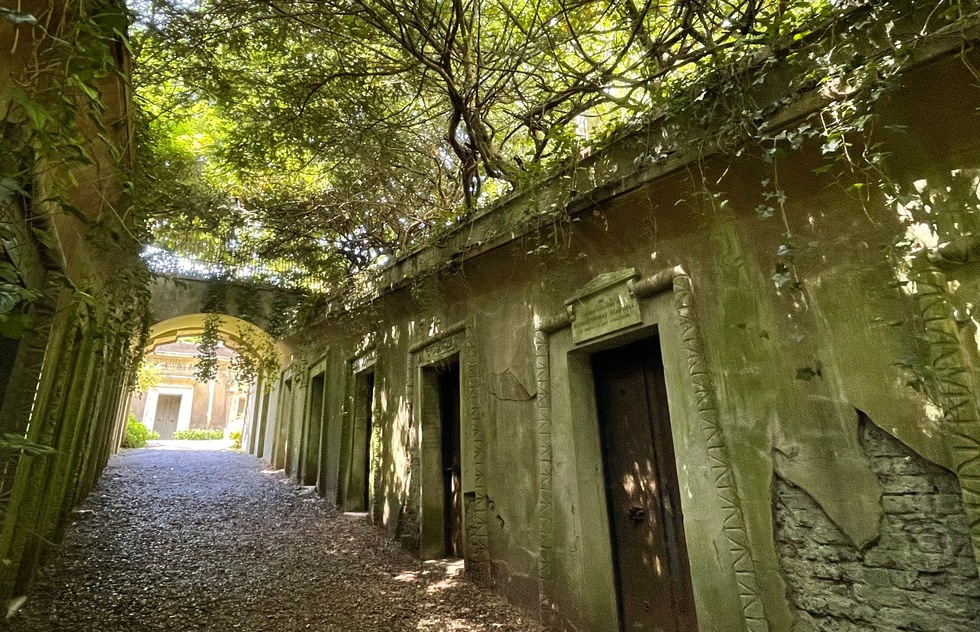 An 1865 guidebook to Highgate rightly describes Egyptian Avenue as "a cold stony death-palace." Originally, this hundred-foot-long passageway, nicknamed the Street of the Dead, was enclosed. The ceiling collapsed long ago, but the eight private burial vaults that line the passage remain. Each vault is secured with a heavy cast iron door depicting an upside-down torch, a symbol for extinguished life. Behind each door there's room for a dozen coffins on stone shelves. You'll swear you hear some of them stirring as you hasten past on the gravel path. 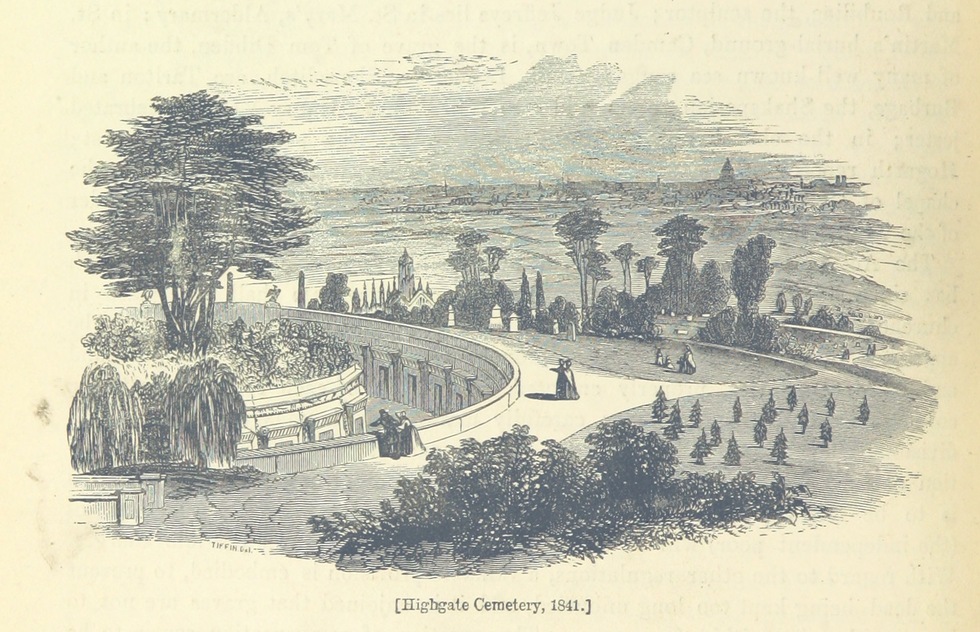 Egyptian Avenue leads directly to the Circle of Lebanon, the heart of the West Cemetery.

The architect was Stephen Geary, who was otherwise well-known for designing ostentatious London "gin palace" bars. Geary centered this section on a mighty cedar tree, a remnant of an estate that was demolished to make way for burials. In the 1830s, the tree was thought to be more than a century old, so it was a natural hub for a double ring of burial chambers, each with its own heavy door crafted by a London iron founder.

People would come to Highgate just to enjoy a pleasant stroll away from the miasma and stench of the rest of the city. One 1839 publication rhapsodized about Highgate's "close-cut lawns and flower borders." Think of that: In early Victorian England, even graveyards were preferable to the squalor of the streets, a topsy-turvy economic reality that gave Dickens and Marx so much juice for their writings. 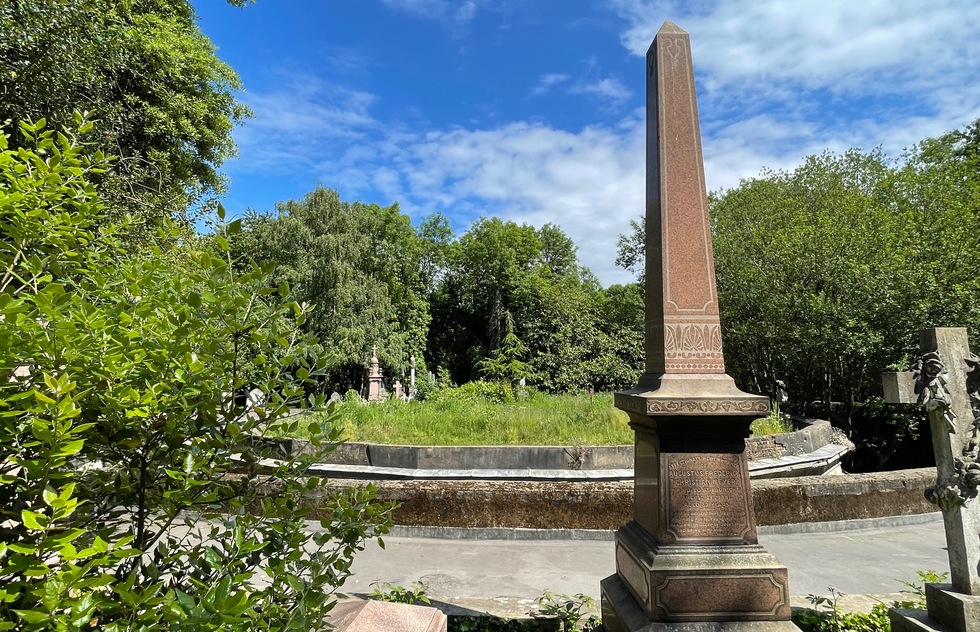 Today, the Circle of Lebanon is far from the soothing Eden it was crafted to be. Geary himself died in 1854 and was buried at Highgate. Now the rings of tombs are chipped and moldering.

The ancient tree became so elderly and sick that in 2019 it threatened to collapse and had to be chopped down. But a new cedar tree will grow here, beginning a new cycle.

In the meantime, Highgate makes for a picturesque filming location. Lots of TV shows and movies have shot here, including Fantastic Beasts: The Crimes of Grindelwald (2018) and the schlock vampire horror The Body Beneath (1970). 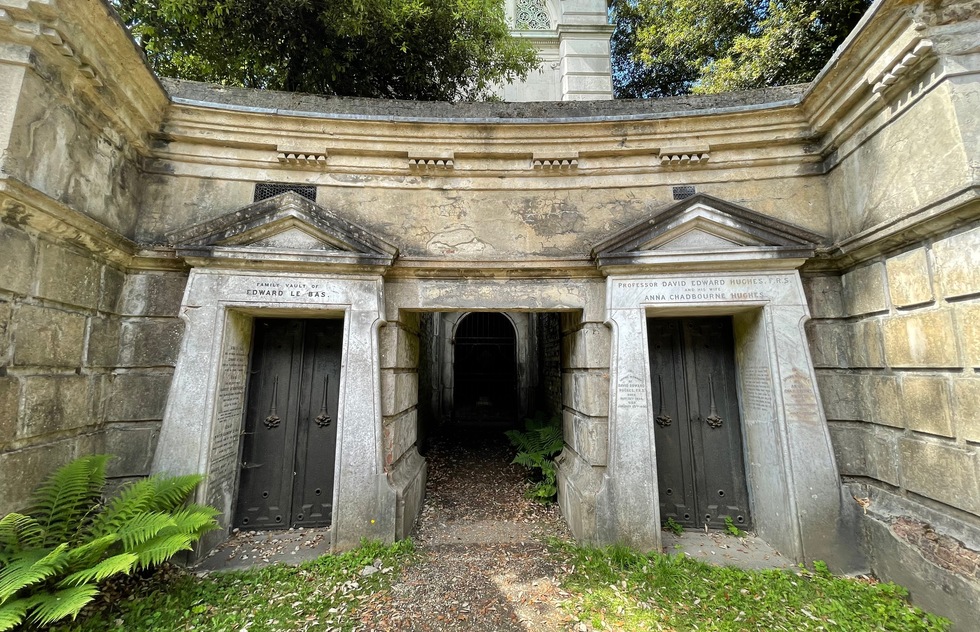 Visitors can wander through the troughs in the earth where Geary inserted these mausolea. Nobody who knew the people inside are alive anymore—you will likely be the only soul paying respects, leaving you free to explore all the hidden nooks and cul-de-sacs, provided they're on established footpaths.

If you wander off the marked trails, though, you risk falling through weakened stones into unseen subterranean chambers. Once you've tumbled into a smashed and forgotten coffin vault, your cries for help—if you're able to make any—may not be heard, and you could unwittingly become a permanent resident. 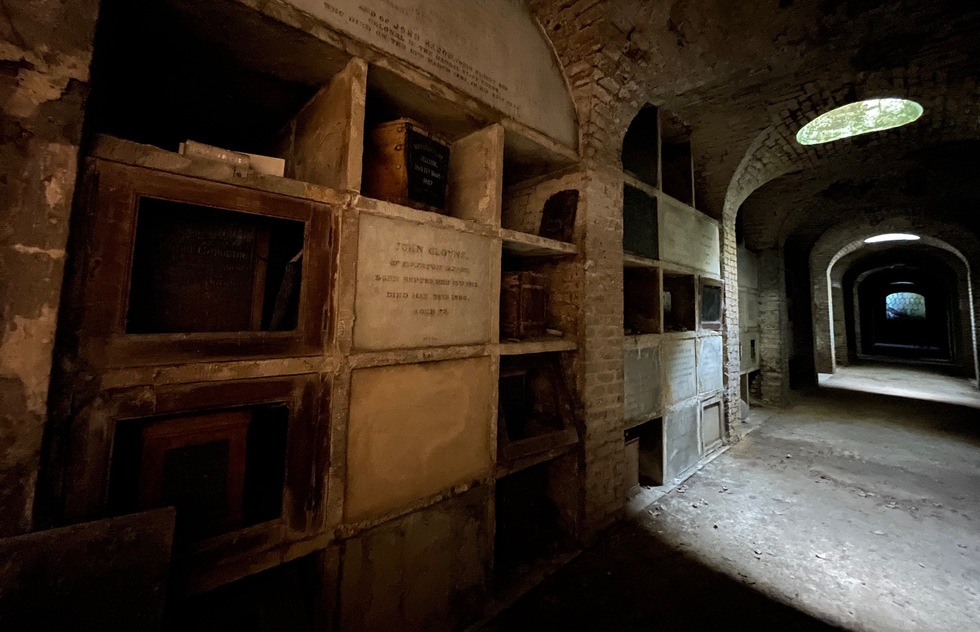 The best way to immerse yourself in the fabulously eerie scene is to book a private tour. That's the only way you can gain entry into this section, the famous Terrace Catacombs. Your guide will have the key and will lead you into the dewy gloom by flashlight, as there is no artifical light here, only weak daylight filtering through small openings.

Constructed in 1838, the catacombs extend nearly as far as a football field and are lined with 825 vaults, or "loculi," which were all installed with either an inscription slab or an inspection window. Victorians were fascinated by death—perhaps in part because, as Marx experienced, so many of their children died before adulthood. It was a common activity on a pleasant Sunday afternoon to come look at your loved one's coffin.

Over time, many of these enclosures have ruptured. Some were smashed by vandals. Some were blown out by explosions as decomposing bodies burst their sealed lead coffins. The result is that many of the caskets are now exposed to the eye. My guide assured me that I was only looking at outer decorative shells concealing the true coffins inside—a technique to thwart grave robbers—and that the bodies within had long since been removed. But in the stultifying inky silence of the catacombs, that was a difficult claim to believe. 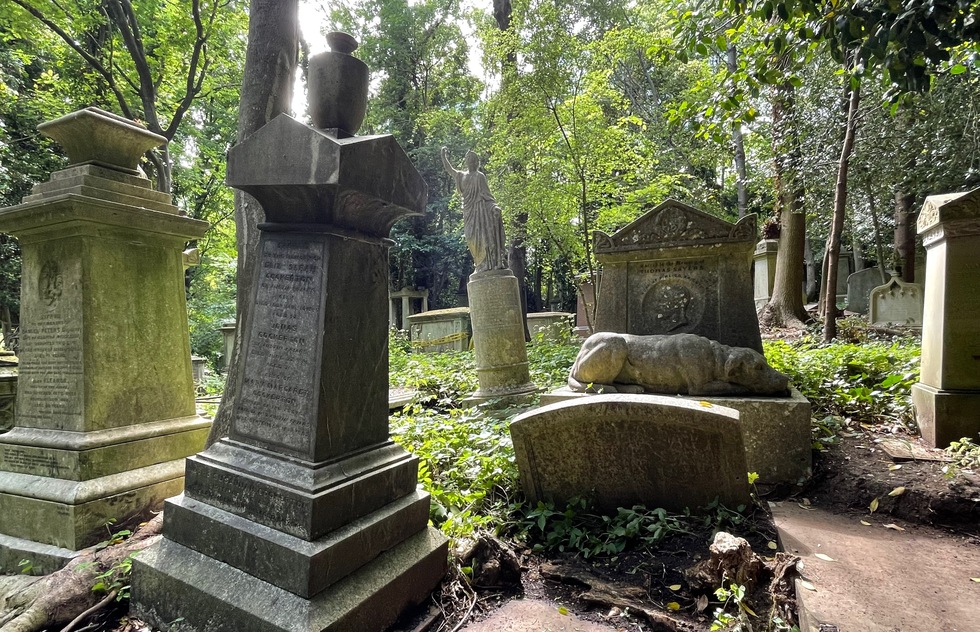 Back under the dim canopy of trees, look for Thomas Sayers. You've almost certainly never heard of this superstar bare-knuckle prize fighter, but he was so popular when he died in 1865 the British Parliament suspended its hours so that more people could attend the funeral. Some 30,000 jostling admirers swamped Highgate, trampling plantings and breaking monuments. The boxer's stone is decorated with a depiction of his faithful mastiff, Lion, now waiting in perpetuity for the return of his master.

There are quite a few stone animals in Highgate. George Wombwell, the operator of a traveling zoo, has a sculpture of an actual lion called Nero. And John Atcheler, a wealthy horse slaughterer (animal removal being a necessary and lucrative profession in the time before cars), has a miniature horse topping his place. The sculpture has been a target of vandals, but it has been repaired by the Friends of Highgate, who keep things in the best condition they can.

Guided tours will help you find these landmarks among the twisting pathways and creeping wilderness. You'll also become acquainted with some of the most common symbols on stones, including pelicans (a symbol of sacrifice for others), carved ivy (tenacity), and lotus flowers (rebirth). 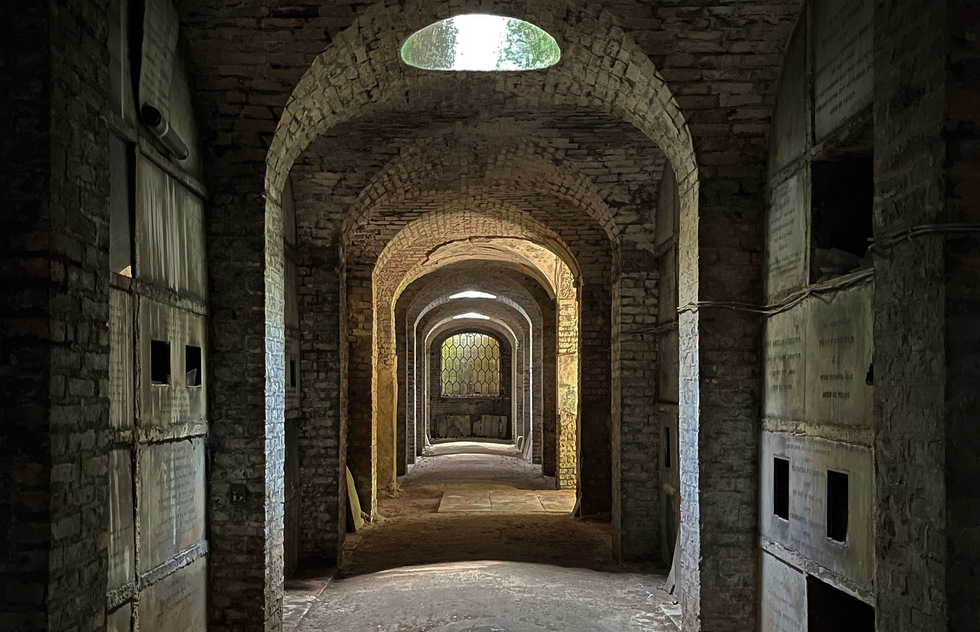 Highgate Cemetery (Swain’s Lane, London; Tube: Archway) is accessible by timed entry ticket that must be purchased at the official website. The most interesting areas can only be accessed via a guided tour (extra charge), which must be booked the same way. The cemetery is open daily 10am–5pm (or 4pm from Nov–Feb). Self-guided tours of the entire cemetery cost £10 (£6 kids 8–17, free for kids under 8); guided tours cost another £5 (£2 kids 8–17).