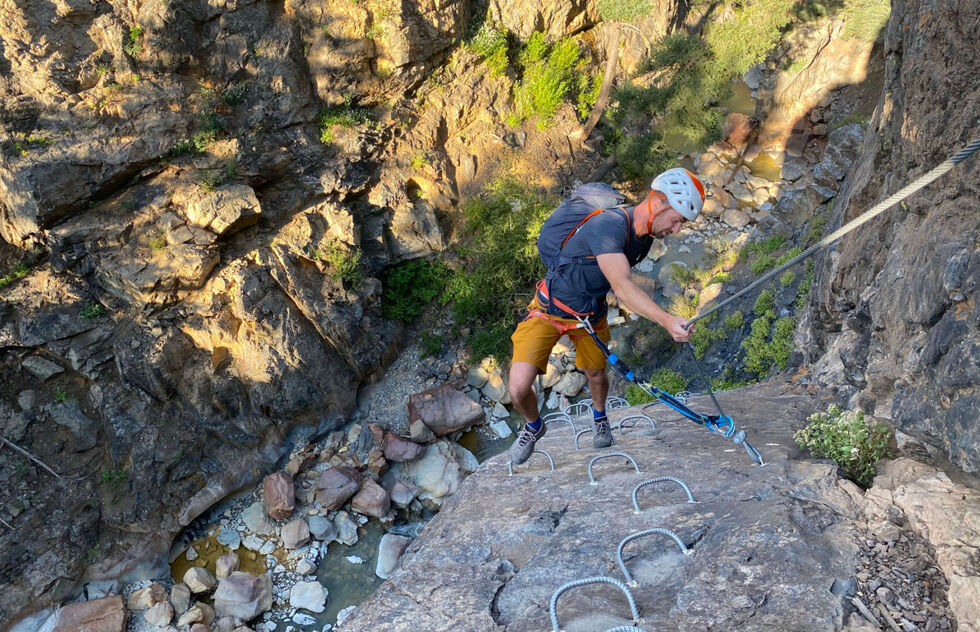 Not to worry. We know just what to do.

Step one: Find yourself a via ferrata (Italian for “iron path”). Step two: Suit up with a helmet and harness. Step three: Ascend a series of steel rungs making up a kind of ladder in the sky. Because your harness is connected to bungee-like ropes and carabiners that move along with you, it’s much less scary than traditional climbing, and in nearly all cases, no expreience is necessary.

Via ferratas, originally created to move troops around the Dolomites in Italy during the first World War, are now meant for fun, and they’ve spread to mountainous terrain in other corners of the globe, including the United States.

Part climbing, part hiking, and part scrambling, the exhilarating routes supply the adventure—and some of the bragging rights—of mountain climbing without the same degree of danger or the need to lug around heavy gear.

Here are five rewarding via ferratas worth checking out in the American West.

Pictured above: Ouray Via Ferrata in Colorado 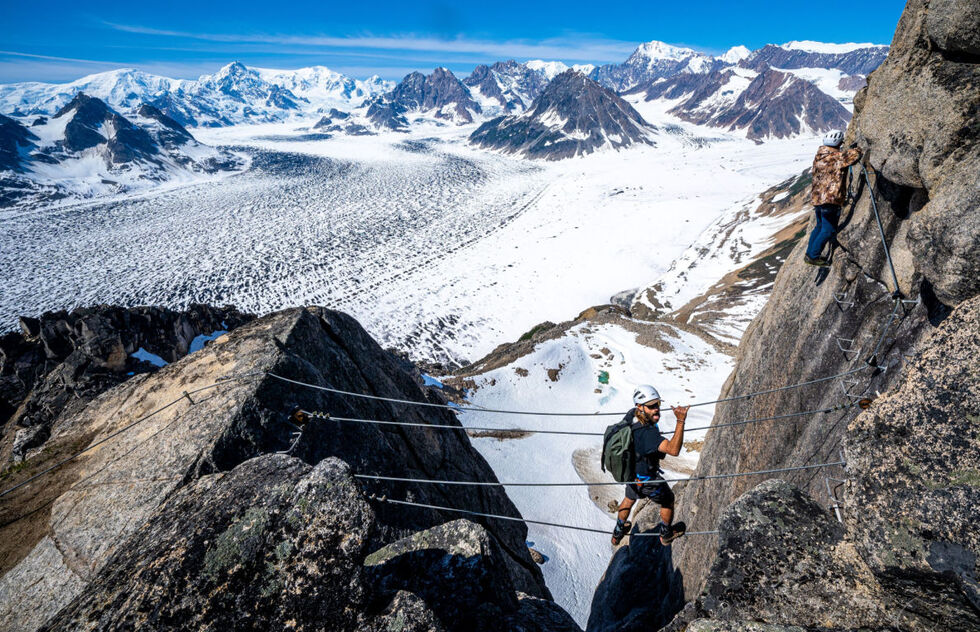 Tordrillo Mountain Lodge’s via ferrata wins, hands down, for most remote climb. Not only will you be dumbfounded by views of the Triumvirate Glacier and impossibly blue glacial lagoons, but you’ll also be wowed by the helicopter ride to reach the start of the route. Getting there by chopper is the only option since the climbing site is 80 miles from the closest road. (The via ferrata is available for lodge guests only.)

Begin at 4,000 feet above sea level and shimmy your way up 900 vertical feet while tethered to a steel cable affixed to the mountainside. Guides lead participants along the 1,200-foot iron path, crossing two suspension bridges showcasing icy wonders below. Once you get back to the lodge, rest and recover with a gourmet meal and a deep-tissue massage. 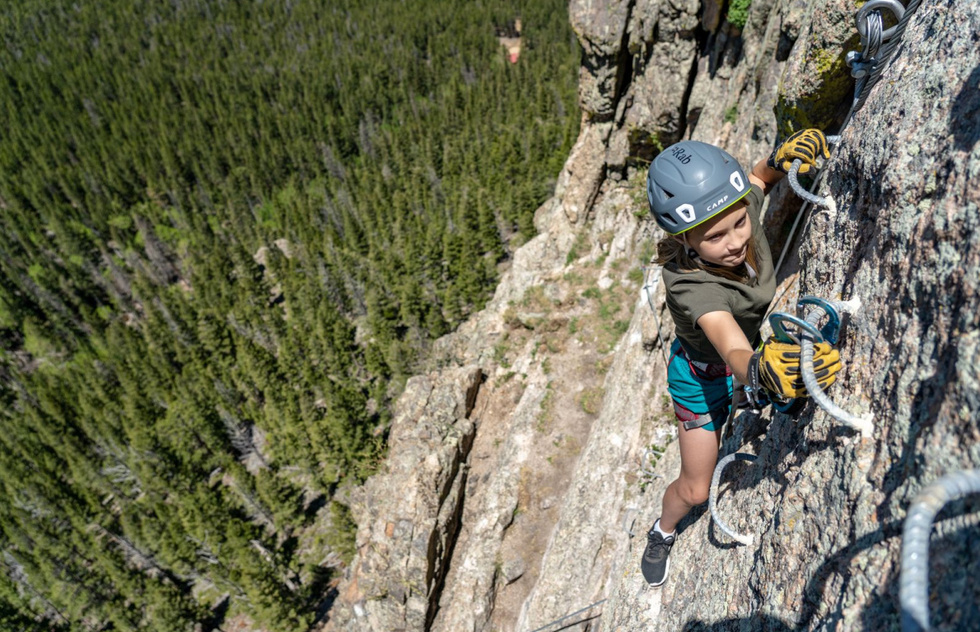 Season: May through October

There’s no doubt you’ll gain street cred after tackling the Cloud Ladder at Kent Mountain Adventure Center. After all, the Rocky Mountain climbing route is the steepest and most vertical via ferrata in North America. Dreamed up by legendary climber Harry Kent, the ladder ascends via metal rungs 625 vertical feet to a summit upwards of 9,200 feet in elevation. You’ll also trek across two 40-foot suspension bridges overlooking a 300-foot-deep ravine. Sweet summit rewards include views of Rocky Mountain National Park, the Mummy Range, and the gorgeous domes known as Jurassic Park.

The Cloud Ladder is physically demanding and, as the Kent center’s description puts it, “not for the faint of heart.” For something tamer, choose the easier Peregrine Arete route, which has an elevation gain of 400 feet and takes about 3 hours. 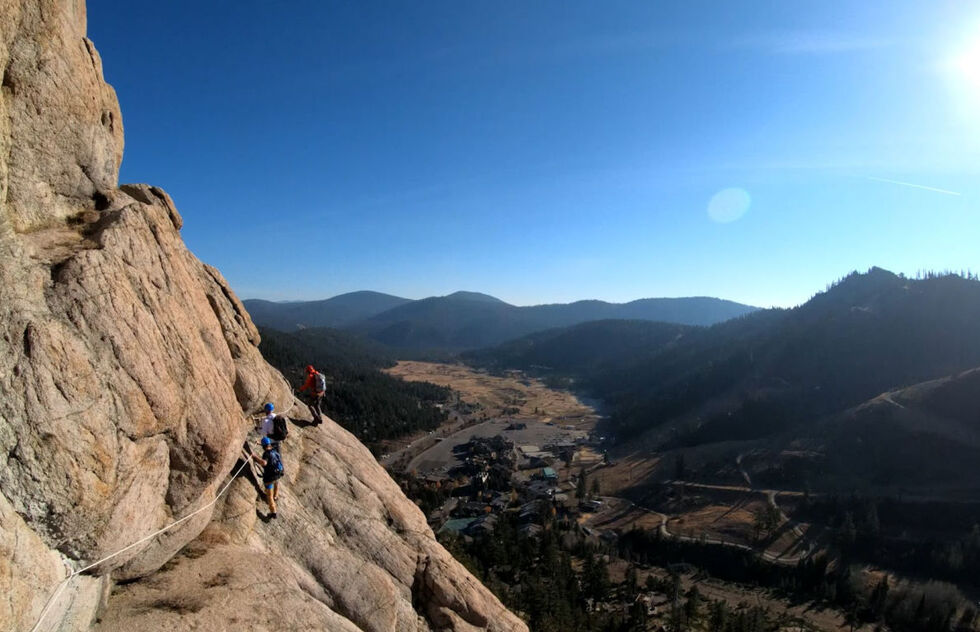 Alpenglow Expeditions
Tahoe Via Ferrata at Palisades Tahoe in California

If you hear a whistle or chirping noise while climbing the Tahoe Via Ferrata, chances are you’re near a yellow-bellied marmot, an adorable member of the squirrel family that lives at high elevations. Also keep those peepers peeled for deer, the occasional bear, and birds galore. This system encompasses four different climbing routes you can choose from to reach the summit of an 800-foot vertical cliff at the Palisades Tahoe mountain resort. Apart from the wildlife-spotting opportunities, highlights include zigzagging between granite towers, waving hello to the Palisades Tahoe Tram as it passes overhead, and enjoying dramatic views of the valley and Sierra Nevada. 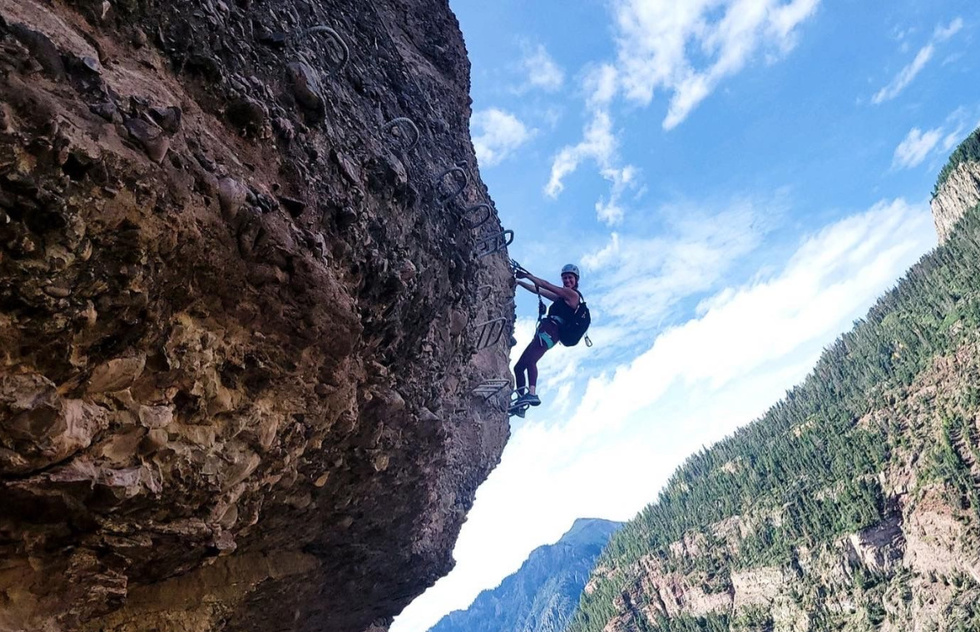 Season: May through September

Adventurous souls flock to Ouray each January for an annual ice climbing festival. If you find yourself in this sleepy town come summertime, you can still get vertical by checking out the Ouray Via Ferrata. Free to the public, this route comprises an impressive 4,000 linear feet of anchored cables. Add to that the chiseled good looks of the San Juan Mountains and you’ve got quite the eyeful. Other enticing photo opps include a 35-foot cable bridge with dizzying views of the Uncompahgre Gorge and a 75-foot sky bridge. San Juan Mountain Guides provide gear rentals and instruction. 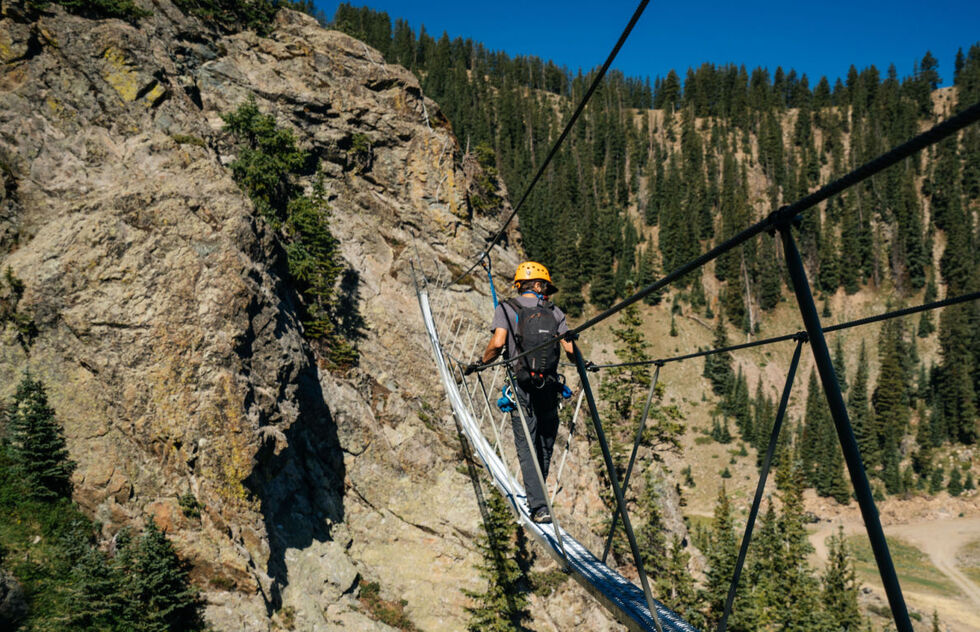 Take the newbie route at the Taos Ski Valley Via Ferrata to trek across a 100-foot sky bridge suspended 50-feet in the air. More advanced climbers, meanwhile, will dig the double-cable catwalk on the K Chutes Tour. No matter which route you take to the top, you’ll get views of the Rio Hondo and Wheeler Peak Wilderness at 11,500 feet. Bump up the photogenic factor by opting for the sunset tour, which culminates in panoramic views of the valley at dusk.