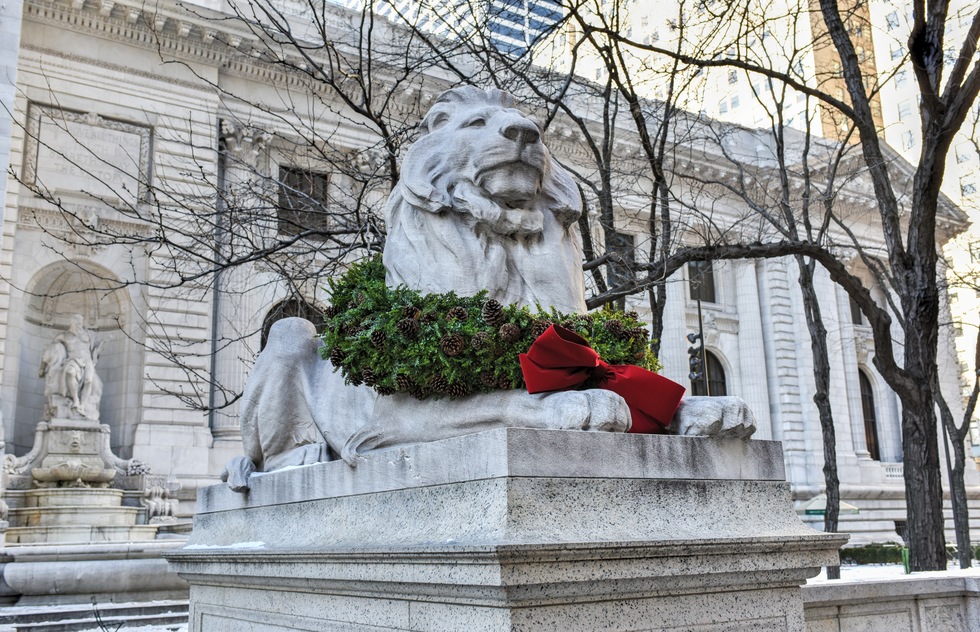 Air conditioning, bank ATMs, toilet paper, hip-hop, and Waldorf salads were all invented in New York City. Believe it or not, so was the modern way of celebrating Christmas.

In Gotham, a Pulitzer Prize–winning history of the city, authors Mike Wallace and Edwin G. Burrows tell the story of how two NYC-based writers created many of the tales and traditions surrounding the holiday.

The first was Washington Irving who, in his 1809 book Knickerbocker's History of New York, created Santa Claus. St. Nicholas, Irving wrote, was "a jolly old Dutchman, nicknamed Sancte Claus, who parked his wagon on rooftops and slid down chimneys with gifts for sleeping children on his feast day." Wallace and Burrows note: "Certainly nothing remotely like the Sancte Claus protrayed by Irving had ever been known on either side of the Atlantic."

A decade after he rebranded the saint, Irving also reimagined how the church-based holiday should be celebrated. His 1819 short story collection The Sketch Book would introduce readers to Ichabod Crane, Rip Van Winkle, and the idea of Christmas as a "cozy domestic ritual."

A few years later, another New Yorker, Clement Clarke Moore, penned his beloved poem "A Visit from St. Nicholas," which moves the right jolly old elf's drop-in from his saint's day, December 6, to the night before Christmas, December 24.

That revision ended up having a huge impact on how the holiday was celebrated. Up to then, many Protestant Americans gave little attention to December 25, regarding the date's yuletide designation, according to Wallace and Burrows, as an "artifact of Catholic ignorance and deception: not only was the New Testament silent on the date of Christ's birth, they noted, but the Church picked December 25 to coincide with the beginning of the winter solstice, an event traditionally associated with wild plebeian bacchanals."

But the irresistible popularity of Moore's poem, which was picked up by newspapers across the United States, sealed December 25 as Christmas Day—and the proper date for family gatherings, tearing into suspended stockings, reaping Santa's windfall, and gathering around Christmas trees (brought to Brooklyn by German immigrants in the 1830s).

Having originated, maintained, disseminated, and improved so many Christmas traditions, New York City is arguably the holly-jolliest place in the United States to spend a December getaway. What follows, in no particular order, are the city's top 10 seasonal sights and experiences. 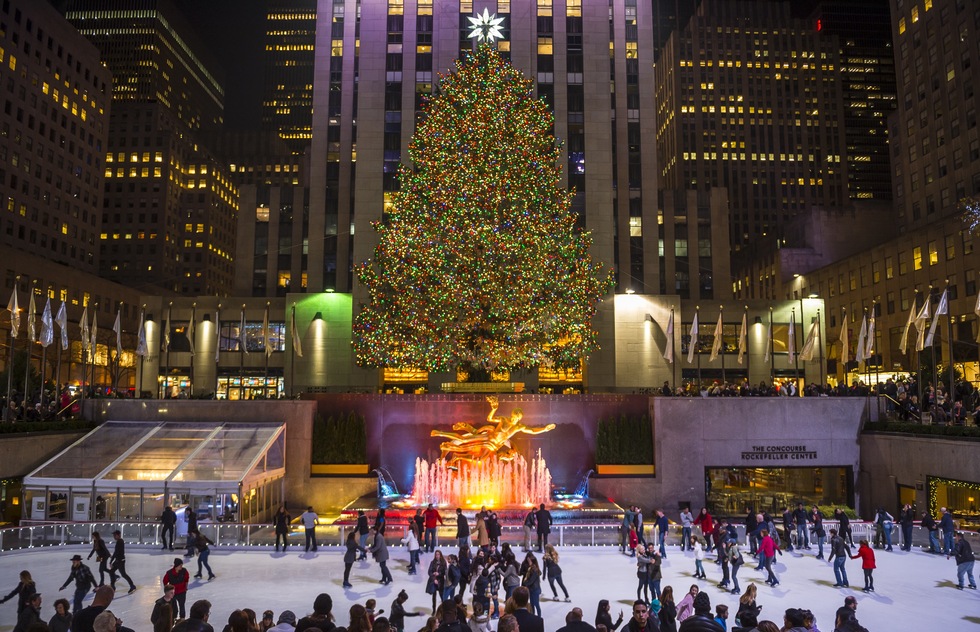 Seemingly every inch of the iconic, 14-building city-within-a-city known as Rockefeller Center is decorated for the holidays. But the masssive tree overlooking the skating rink (pictured) has become the embodiment of a Big Apple Christmas.

The tradition of putting up a tree started in 1931. It was the height of the Great Depression, and the construction workers employed at the site (involved mostly in demolition of old buildings at that stage) put up a small tree in the muddy plaza and adorned the boughs with tin cans and hand-cut paper stars. Since then, the decoration has grown more and more elaborate—involving in 2022 some 50,000 multicolored lights strung on roughly 5 miles of wire. Since 2018, a 900-pound Swarovski crystal star has crowned the tree.

Visitors can simply stroll the plaza to view the tree, but the best way to experience Rock Center's tannenbaum is by zipping around the ice skating rink and gazing upward into the outspread branches. Just don't gaze upward so long that you trip and fall on the ice. 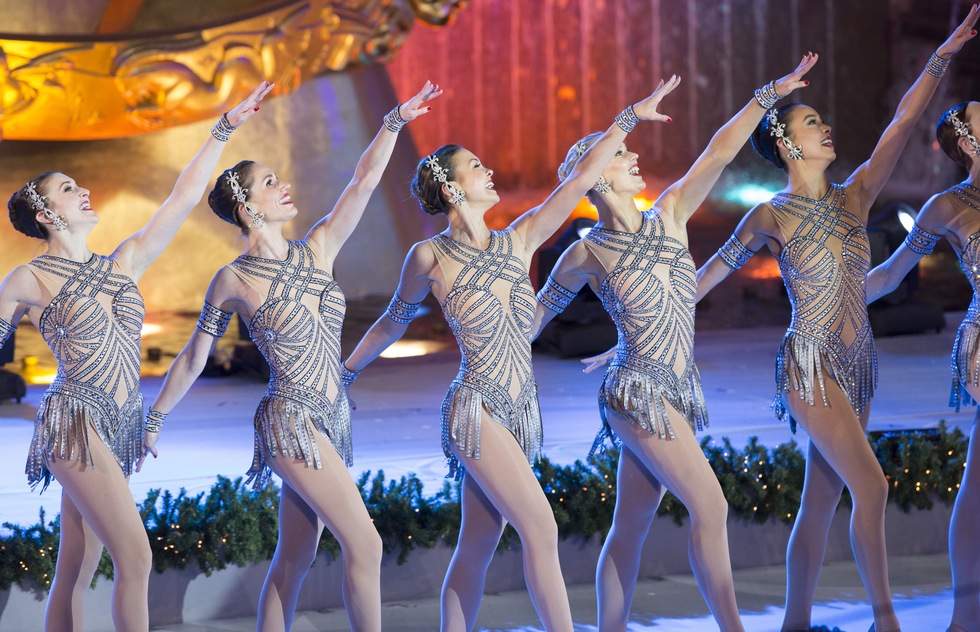 The 72 kicking legs of the Rockettes at Radio City Music Hall are as potent a symbol of the season as the tree at nearby Rockefeller Center.

The precision dancing chorus line was founded in 1925 by St. Louis choreographer Russell Markert. But it wasn't until 1934, when the troupe became Radio City's in-house dancers, that they were rechristened the Rockettes.

Today, about a thousand women a year audition to join, but only those between 5 feet, 6 inches, and 5 feet, 10.5 inches in height, with excellent ballet, tap, jazz, and modern dance skills, make the cut. Of the 80 Rockettes hired annually, 36 perform at each show. They're arranged by height so that the entire line looks the same size.

The Christmas Spectacular changes each year, though certain set pieces, such as "The Parade of the Wooden Soldiers" and a manger scene complete with live camels and donkeys, have been part of the extravaganza since the start. 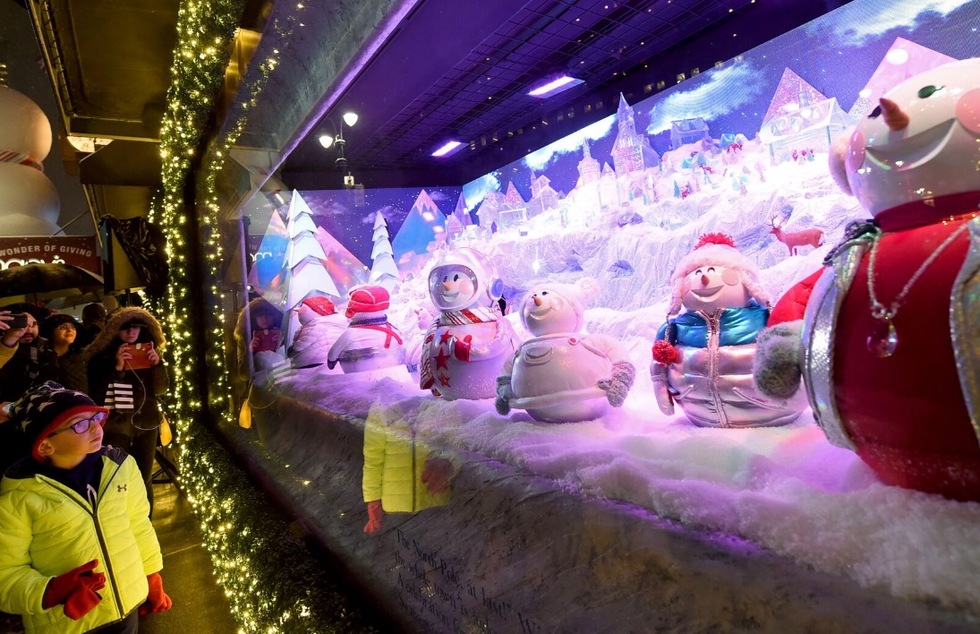 Decorating department store windows for the holidays is yet another tradition with roots in New York City. According to historians, R.H. Macy placed porcelain dolls from around the world in his eponymous store just before Christmas in 1874 to lure in shoppers. Some dolls were arranged in tableaux of scenes from the novel Uncle Tom's Cabin. Faster than you can say "and to all a good night," rival stores were putting up their own window displays.

The Macy's Herald Square flagship is still famous for its windows, which often feature animatronic creations (pictured above). Bloomingdale's, Bergdorf Goodman, Saks Fifth Avenue, and other major retailers also construct eye-popping spectacles. The best viewing times are after dusk, especially at Saks, where the entire facade of the building features a light show coordinated to holiday music every 10 minutes between 5pm and 10pm. 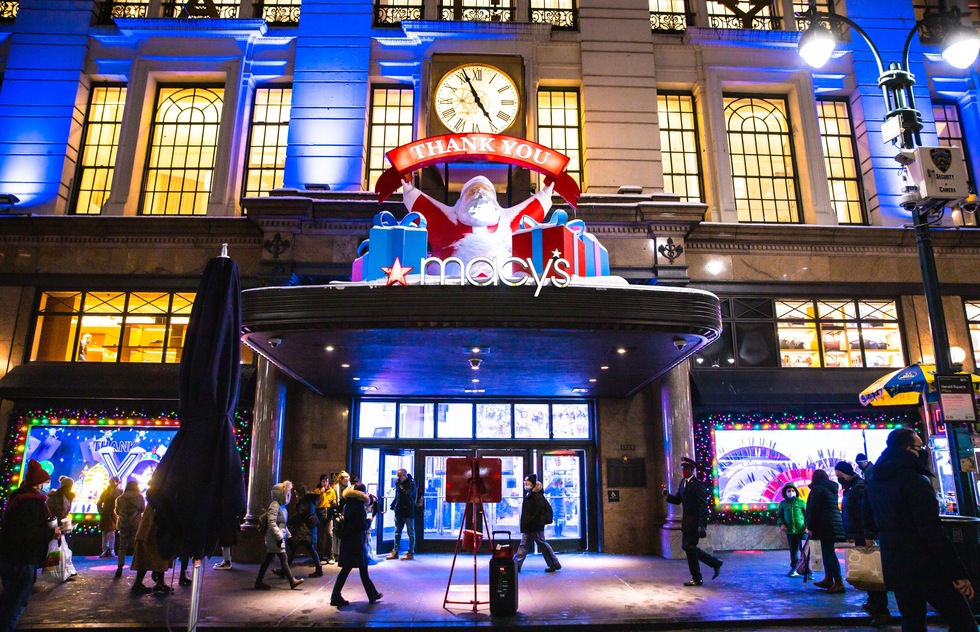 LittleNYSTOCK / Shutterstock
Macy's Santaland
Did Macy's also invent in-store Santas? That's a matter of dispute. The Macy's website used to claim the store invented the practice, but others believe the Santa we'd recognize today—the one based on cartoonist Thomas Nast's jolly red-suited dude—actually debuted in a Boston store in 1862.

No matter. Thanks to classic movies like Miracle on 34th Street as well as author David Sedaris' "Santaland Diaries," Macy's sits at the top of the Nice list when it comes to Santa experiences. The store's Santaland, which involves going through the decorated store before taking a photo with the big, white-bearded fellow, is still free—though you'll need an advance reservation due to the popularity of the attraction. Bookings are available 5 days before a visit and they're snatched up quickly, so be sure to head to the Macy's website to secure a spot for your tot. 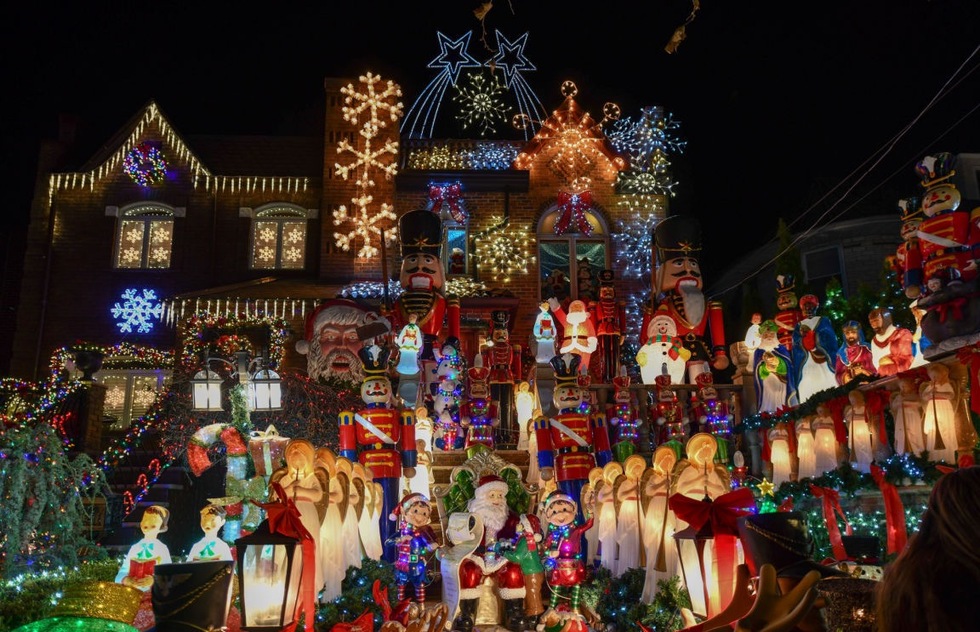 Which New York City Christmas decorations stand the best chance of being visible from space? It's not the lights of Rockefeller Center or any other Manhattan spot. To find the most over-the-top holiday spirit in New York, head for the small, Italian American enclave known as Dyker Heights in southwestern Brooklyn. Since the 1940s, residents have been festooning their homes and yards with millions of twinkling lights, and each year the displays get bigger.

Today the razzmatazz includes huge inflatable holiday characters, animatronic figures, and motorized displays, each more elaborate than the next, covering six square blocks betwen 11th and 13th avenues, and 83rd to 86th streets. You can reach Dyker Heights via several subway lines (you'll have to walk about 15 minutes from the station) or on one of the many tours that have sprung up to get viewers to this relatively remote corner of Brooklyn. Best viewing time: between dusk and 10pm, when the lights are shut off for the night. 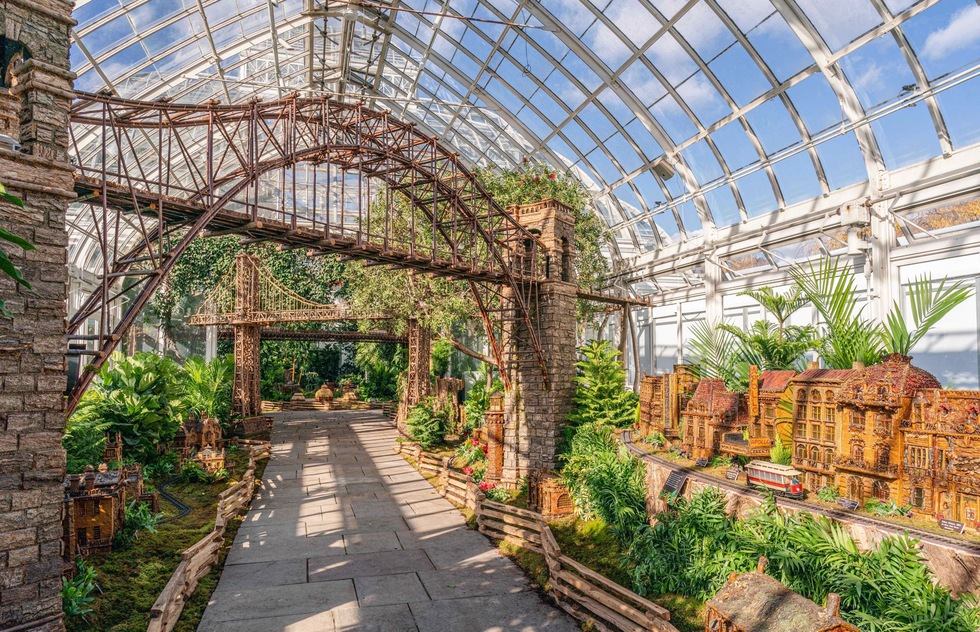 Seeing model trains chug through a re-creation of historic NYC remains one of the top delights of the season. For more than 30 years, the New York Botanical Garden in the Bronx has created a tiny Gotham in the greenhouse, placing 190 miniature buildings, bridges, amuseument park rides, and more alongside nearly half a mile of track. All the structures are made from natural materials such as sticks, berries, and bark. Upping the nostalgia factor: Some of the replicas replicate buildings that no longer exist. Visit toward dusk so you can pair train viewing with NYBG's outside light display, Glow. A combo ticket is the best way to save if you decide to see both. 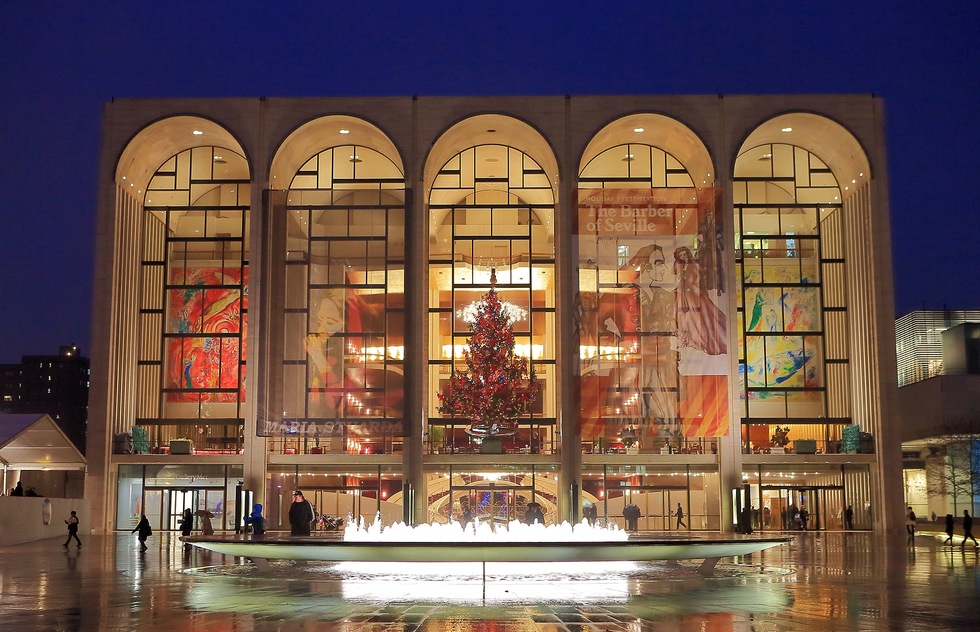 While New York City Ballet's rapturous version of The Nutcracker (choreographed by George Balanchine) is Lincoln Center's marquee Christmas attraction, the truth is that the ballet is one of many seasonal treats at Lincoln Center. The Metropolitan Opera (pictured) centers its December programming on Mozart's The Magic Flute—an abbreviated, English-language version with boffo costumes, puppets, and direction by The Lion King's Julie Taymor with an eye toward appealing to families, opera aficionados, and newbies alike. At the complex's David Geffen Hall, the New York Philharmonic's annual presentation of Handel's Messiah is another hugely popular event. And in the center's bandshell area, the Big Apple Circus puts up its tents each December. 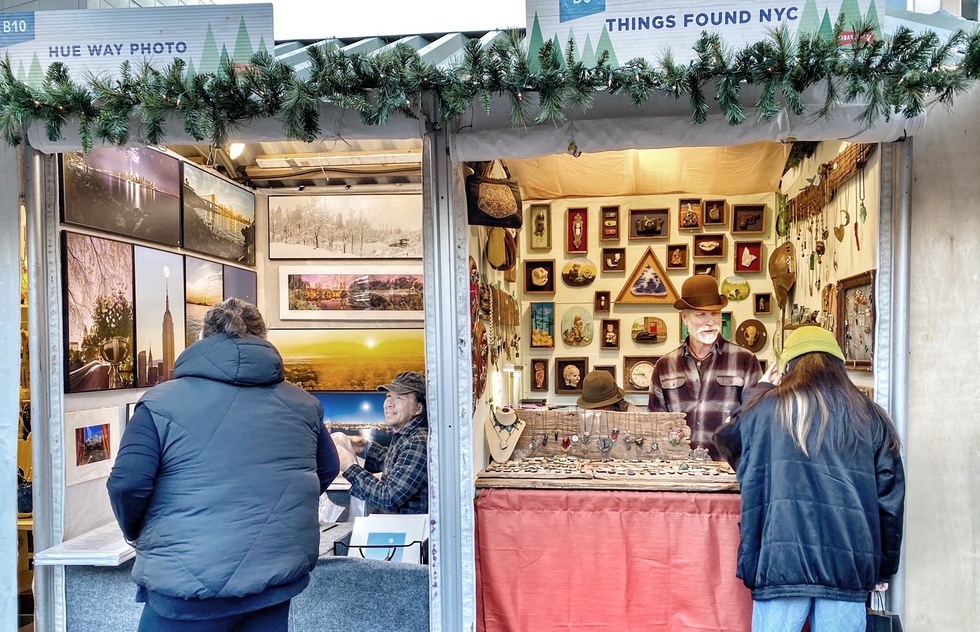 Holiday markets set up shop in all five boroughs, but the ones open 7 days a week (from late November until Christmas) are the biggest draws. These behemoths at Columbus Circle, Bryant Park, and Union Square host over 125 vendors apiece. Another market within Grand Central Terminal has about three dozen more.

There's not a massed-produced item to be found at any of these bazaars. In many cases, you can rest assured you're buying goods crafted in the Tri-State area. That might mean hot sauces from Hell's Kitchen west of Times Square, fake fur sunglasses and wacky t-shirts from Aliens of Brooklyn, hand-crafted bitters from TNT Bitters Co. in upstate New York, or dishcloths in sprlightly Swedish designs from Connecticut. There are booths hawking chocolate, jewelry, winter accessories, kitchen supplies, bath goods, and so on. As at European Christmas markets, strolling musicians make appearances, and you can fill up at food stands serving everything from Korean-style corn dogs to Persian stews. 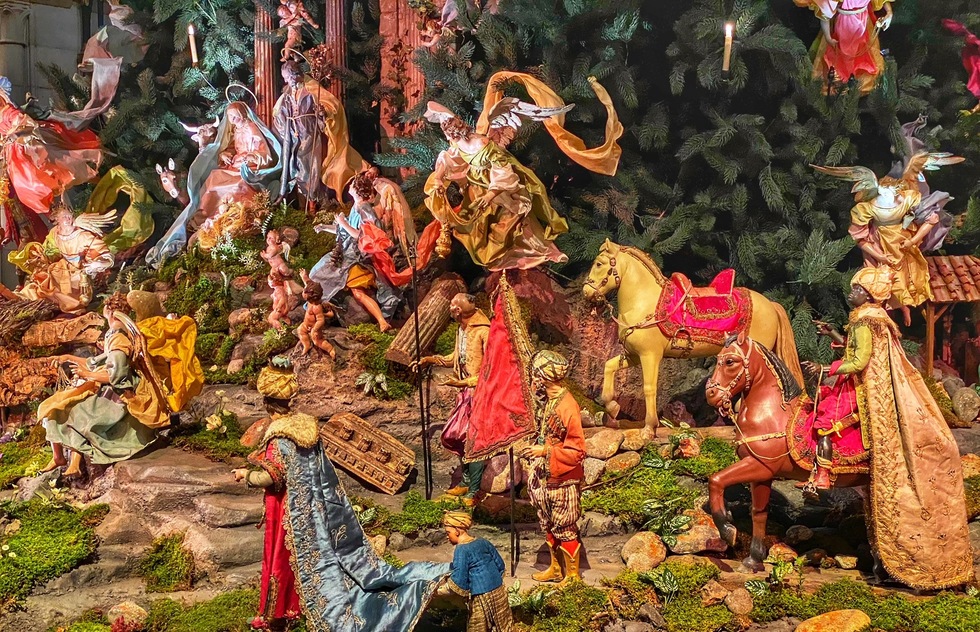 The Metropolitan Museum of Art displays its exquisite collection of 18th-century nativity figures just once a year, from late November until early January. The figures are set on and around a massive Christmas tree in the museum's Medieval wing, and the sounds of Christmas music accompany their presence. Sometimes live performers are featured; the museum hosts numerous Christmas concerts here throughout the season. The nativity figures' costumes from the 1700s dazzle with jewels, embroidery, and other intricate accessories. These treasures were shaped, painted, and dressed by some of the most celebrated sculptors in Naples, Italy. (Pictured above is a close-up of the Wise Men, Mary, Joseph, and Baby Jesus). 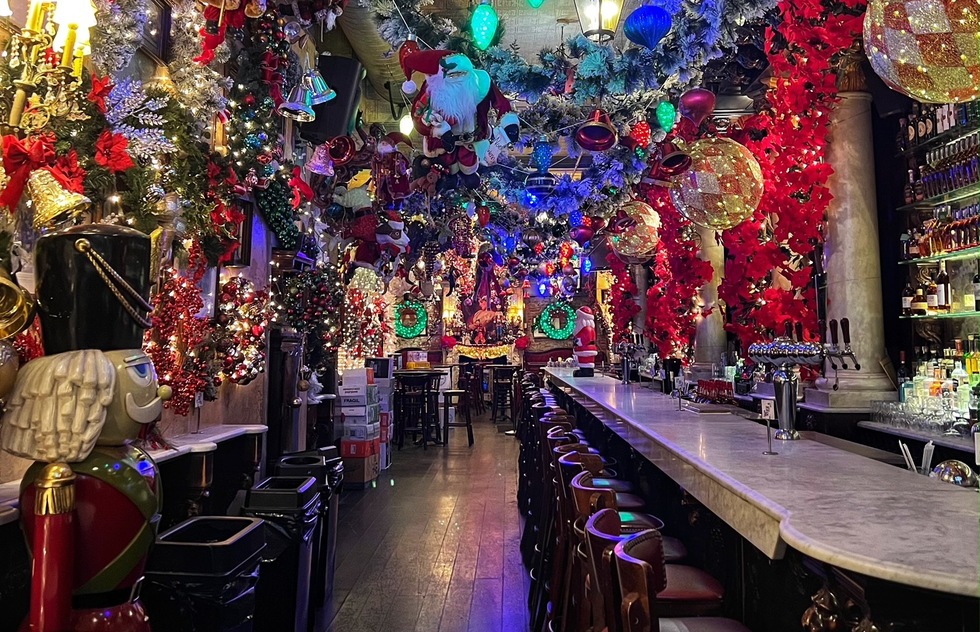 Not all merriment has to be kid-friendly. A lot of New York bars get into the spirit with elaborate decorations to go along with your peppermint schnapps. Pictured above is Lillie's Victorian Establishment located off Union Square. Nearby is Rolf's German Restaurant, the city's self-described "Most Festive Restaurant" (I do not envy the staffer who has to dust the wall-to-wall lights, hanging balls, and other displays).

Other notable Christmas bars: Serra Alpina by Birreria, the heated space above Eataly in the Flatiron District; Frosty's Christmas Bar just off Times Square; and, in Brooklyn, Leyenda (which undergoes a seasonal transformation into "Sleyenda") in Cobble Hill and Snowday in Brooklyn (a holiday makeover of the restaurant Sunday in Brooklyn) in Williamsburg. Cheers!