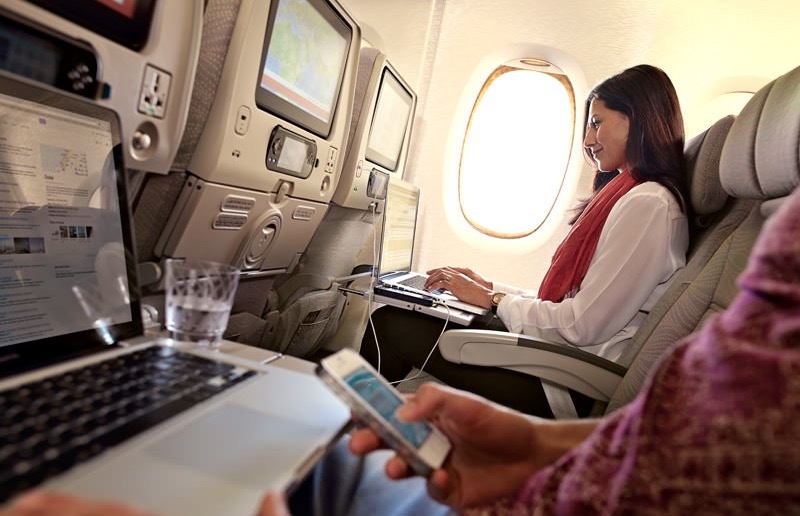 Flying One of the World's Longest Flights—in Economy

If there’s a long-haul flight in your travel plans, this account of a 15-hour flight I recently made in economy class will give you an idea of what’s in store. (Teaser: Flying more than six hours on an international flight is way more enjoyable than flying six hours across the U.S.)

Clocking in at 15 hours long (actually 14 hours and 52 minutes), the trip from Los Angeles to Dubai ranks as one of the longest flights in the world, with only a handful of flights surpassing this one in flight time. For most travelers, spending more than half a day on an airplane sounds like, well, the worst thing ever, especially if you’re stuck in economy class. Yet there are small ways to make these seemingly never-ending journeys a little more comfortable.

• Checking In. Check-in for the flight from LA to Dubai began three hours before departure time. But I checked in online so that when I arrived at Tom Bradley International Airport, I only had to grab my boarding pass and check my bag, which was included in the price of the ticket. (First perk of flying long-haul—no baggage fees!) I also made my final seat selection when I checked in online. This A380 had a 3-4-3 configuration, which was clearly laid out on Emirates’ website, making it easy to pick the seat I wanted. One thing I learned after my flight is that there were several empty seats in the way back and some folks had entire rows to themselves. If you're looking for more space, head to the back.
• Dressing for the Occasion. Tight jeans and high-heels were obviously out of the question for this flight. Instead, I opted for a pair of black, slightly baggy cotton pants, with a pair of flats and a slouchy sweater. The look was not quite “pajama chic” but it was close. I also packed a near-identical outfit (with underwear) to change in closer to landing.
• Splurging for Water. Did I mention the flight is 15 hours long? So yeah, buying a big bottle of water was essential. Water is offered several times on the flight but I was grateful I had a big bottle stashed in my seatback pocket. That way I didn’t need to get up or flag a harried flight attendant for water. Staying hydrated during the flight also helped me fight jetlag upon landing. Somewhat.

• Boarding Pains. Unlike domestic flights where everyone crowds around the gate with complete disregard to their boarding group, the boarding process for this flight, which carried many more people, was designed to smoother. Attendants held up clearly-marked group boarding signs so no one tried to go before their group is called. However, people still anxiously lined up all around the gate, making it hard to determine where a boarding group line started.
The official Emirates glamour shot of what Economy is like

• First, Let Me Take a Seat Selfie. The seats on Emirates' A380 are good-looking with a light-colored effect. And they are reasonably comfortable too, with a seat pitch (how far the back of your seat is from the seat in front of you) of 32”-34”, some of the biggest in the business. (I momentarily forgot that I would be stuck in it for 15 hours, and I immediately Snapchatted a picture to my followers.) Each seat also came with a pillow, a blanket, and a small amenity kit with socks, eye mask, and a mini toothbrush and toothpaste set. When was the last time you saw those in Economy on a domestic airline?
• Setting Up My New “Home.” Boarding a big plane like Emirates A380 takes can take a while, so I used this time to set up my seat by putting my essentials like my phone, magazine, earphones (Emirates, like most long-haul airlines, gives you a pair to use during the flight), and notebook within reach. A sweet seat amenity? The seatback in-flight entertainment system had a USB charger so I could keep my phone fully juiced. 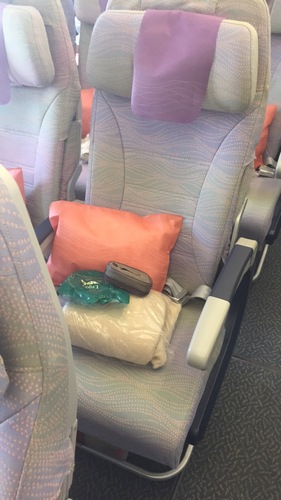 Our shot of Economy reality

• Meeting My Seatmate. I picked an aisle seat largely because I didn’t want to be trapped in a window seat if I needed to pee. But I did say hello to the man in the window seat who was all tucked in with his blanket, pillow, and noise-cancelling headphones. When I asked if we would get lucky by having the middle seat empty, he said, “Absolutely. I blocked it out.” Wait, what? It turns out my row-mate had gold level status with Emirates Airlines, since he frequently makes this LA-Dubai trip. One of the perks of his status, according to him, was that if he booked an economy seat, he could block out the seat next to him, so long as the flight wasn’t full. Then, almost as if on cue, a flight attendant came over to him, introduced herself and said he should not hesitate to ask for anything he might need. Note: She didn’t introduce herself to me or any other passengers around us. And he was right. No one sat in the middle seat.

DURING THE FLIGHT: Hours 1-3

• The First Feeding. Food and drink service started pretty much right after take-off. While first class folk were upstairs living the luxe life in private suites sipping champagne and primping in the Shower Spa, economy class folk were presented with a printed menu of dinner and snack choices (I chose penne with chicken). The good news is alcohol is included. The bad news is the service took longer than I expected: about an hour or so. However, I noticed that if you ordered a special meal—vegetarian, kosher, or Hindu—your food was dropped off first. I recommend doing this if you're the type who gets hangry on flights.
• Movies Galore and More. The seatback screen is loaded with free entertainment options—more than 2,500 channels of movies, TV shows, music, and games in multiple languages. I watched “Joy” with Jennifer Lawrence while eating and while waiting for my tray to be cleared. By this point, I’ve only gone to the bathroom twice. I’ve also avoided alcohol as I’ve heard that makes jetlag worse. My VIP neighbor, though, has had two glasses of wine and is starting on a gin and tonic. He’s an expert flyer so maybe he’s built up tolerance.
• Worst Wi-Fi Ever. Surprisingly, Emirates has Wi-Fi on this international long-haul flight. Even more surprisingly, it only costs a $1. But it is the worst, slowest in-flight Wi-Fi I’ve ever encountered. I don’t think I was able to properly load a webpage. I try not to bag on in-flight Wi-Fi speed because I think it’s still a miracle that we’re all flying in this steel contraption in the first place. But a word of advice to airlines: If you’re going to offer Wi-Fi, at least be sure it works.

DURING THE FLIGHT: Hours 4-6

• Blocking Out My Neighbors. About three and a half hours into the flight, and one more gin and tonic for my friend, the cabin lights are dimmed and the “stars” on the ceiling of the plane have come out. Full from the chicken and penne pasta, as well as the bread and crackers served with my meal, I grab my neck pillow (a must for long-haul flights, no matter how silly it looks), put on my eye mask and my socks. Surprisingly, I fall asleep quickly. But about an hour and a half later, the loud children in the row next to me rouse me from my sleep. Since I have children of my own (but not with me on this flight), I try to be sympathetic, but it’s hard. So I take out my anger on Emirates. How come they didn’t include ear plugs in the amenity kit? A major oversight. But I wasn't going to take this sitting down. I asked a flight attendant if they have any earplugs lying around, and about 10 minutes and one more trip to the bathroom for me, she brought over a packet of wax earplugs. 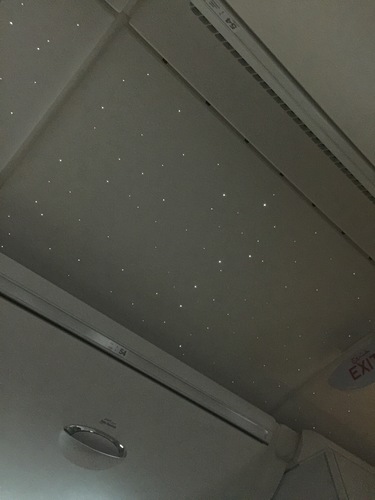 "Stars" in the ceiling: A pleasant gimmick

DURING THE FLIGHT Hours 7-12

• Sleep, Sweet Sleep. Zzzzzzzzz. And no, I didn’t need any sleep aids or alcohol. Just those earplugs.

• The Second Feeding. With about three hours left in the flight, I’m woken up by the hustle and bustle in the aisle for the breakfast service. It works much like dinner service—there’s a menu of options but people who ordered special meals get to eat first, while the rest of us wait about an hour and half before the service cart arrives at our row. I was already grumpy about being woken up but now I’m extra grumpy because I’m hungry and the wait is torturous. (#hangryproblems) I chose the scrambled eggs which was served with orange juice, fruit, a hash brown wedge, croissant, and some crackers with a mystery cheese spread that tasted like a cross between cream and goat cheese. Only two meals for a 15-hour flight felt pretty scant to me but Emirates did set up a snack bar in the middle of the cabin where passengers could grab fruit, crackers, chocolates, and water. 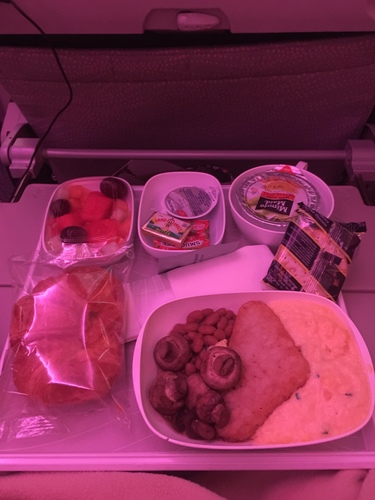 • Landing at Last! After making a few trips to the bathroom, including one to brush my teeth, I settle back into my seat for the final time as the plane descends into Dubai, where local time is 7:30pm. Which means it’s very early in the morning in Los Angeles. Despite the time difference and the lack of quality sleep, and that I have a five-hour layover before taking my next flight to the Maldives, I’m actually excited. Then again, who wouldn’t be excited about stepping out of a plane after 15 hours?

Taking the time to prepare yourself before you board your flight is crucial but also, your long-haul experience largely depends on the airline that you fly. Most long international flights include free checked bags and alcohol, but the combination of Emirates’ comprehensive in-flight entertainment system and comfortable seats made it possible to relax. On the way back from Dubai, I watched about three movies in a row, something I never get to do at home.
Other airlines with stand-out long-haul amenities include free champagne in economy class on Air France; increased portion sizes (by 40 percent) for economy meals on American Airlines; the ability to order a la carte items before your trip on KLM; and the SkyCouch on Air New Zealand, which gives two people more room to snuggle up together.
That said, unless you’re flying in first class, a 15-hour flight is always going to be a rough go. But no travel pain, no travel gain, right?
Air Travel