Thank you for subscribing!
Got it! Thank you!
Home›Tips & News›Air Travel›High Boarding Group Number? Don't Panic—The Airlines Are Messing with You 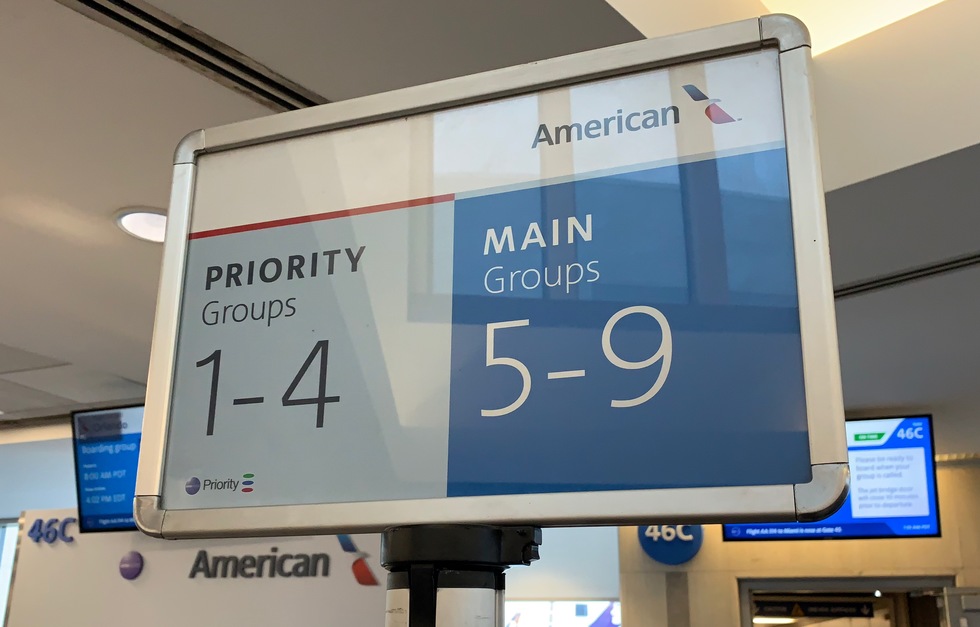 Are you in Group 7 again? No need to fret. The airlines are trying to stress you out so you'll pay more.

Few moments at the airport are more stressful than boarding.

Ever since the airlines started charging for checked baggage, the boarding process has been more like a football scrimmage than an orderly procession. With so many people dodging fees by carrying their luggage to their seats, as soon as the gate agent picks up the microphone and blows into it, passengers swarm the door, desperate to get on the plane before all the overhead space runs out.

"Gate lice," the social media satire account Passenger Shaming calls them—and they're the logical byproduct of the pressure that airlines place on customers. It's only natural that passengers would seek to combat a late boarding group with sharp-elbowed strategy.

The truth is that the airlines want you to be stressed out. They want you to pay a little more to check your bag or opt for earlier boarding. They depend on extra fees for profits—in 2018, the U.S. airlines collected $4.9 billion in fees—so they'll do whatever it takes to make you think you have to pay more to upgrade.

Let's say you've got an Economy ticket on American Airlines and you've been assigned Group 7.

Terrifying, right? Horrible! Just agree to pay for early boarding and be done with it, right?

In actuality, that's not the worst-case scenario because so many early boarding groups are so thinly populated.

Take a look. First, there's preboarding (people with babies, people in wheelchairs—no worries). Then comes Concierge Key, a group of frequent fliers so elite that Lindbergh himself wouldn't qualify. Next up: Groups 1, 2, and 3, which are almost entirely First Class, Business Class, and platinum-level frequent fliers prone to upgrades—passengers who generally don't compete for overhead bins in deep Economy.

By Group 4, we're still only at Premium Economy and gold-level frequent fliers. Again, they're not going to take all the bins. There aren't enough of them. Even Group 5 doesn't fall into American's general Economy boarding. That level is for Main Cabin Extra passengers who ponied up extra cash to board sooner, the way the airline wants you to do.

And it continues for three more groups: 7, 8, and, lastly, 9. That final group is for Basic Economy, who aren't really supposed to have much luggage anyway.

By the time their number is called, though, most passengers in Groups 6 and 7 are biting their nails down to the nubs, convinced they won't be able to get their stuff on board. In truth, only the people at the very tail end of all those groups stand much of a chance of being shut out.

If you doubt that airlines are trying to game you into spending more, check out what Delta recently did. That carrier changed its boarding process so that the first, up-charged groups are all announced by product name. That way, passengers will be aware of what they could have bought to get on sooner. After preboarding, Delta's process goes through four groups of you-could-have-bought-this-one before finally getting to the meat of Economy boarding way down in Group 5.

Delta's gate agents announce over their microphones the last-to-board Group 8 as "Basic Economy"—perhaps a way of publically shaming those ticket holders for their frugality. But Basic Economy customers already know getting luggage aboard isn't a part of their deal. They're not a serious threat to your overhead bin space.

After making you believe you're lucky to get on the plane at all, airlines will ease your mind a little by selling an Economy ticket holder Priority Boarding for $15 and up. But how much time will that save you? You might only board one group earlier—Priority Boarding is United's Group 2, while general Economy is 3 to 5, with Basic Economy waiting to the bitter end.

Yes, you could pony up the extra cash for peace of mind (and in JetBlue's case, doing so comes with more seat space for your knees, which counts for something). But most of the time, you won't need the slight boost.

Yes, if you enter the cabin late in the process you may have to park your bag in a bin that's farther back than your seat location, and that could require you to wait a few more minutes to de-plane. But wouldn't waiting three more minutes to leave be worth saving $15 or more? That's $5 a minute.

Let's say the worst does happen. Let's say you're in Group 8 and bin space runs out. In nearly every instance, the airline will check your bag for free, anyway. So what are you stressing out about? You saved the bag check fee either way.

The airlines know their planes are inadequate for the crowds they pack into them—the companies are just banking on using that against you by making you nervous about it.

Saturday Night Live skewered the boarding group hairsplitting back in 2013. Fees have gotten steeper since then, but the spoof is just as true (and as funny) today.