Thank you for subscribing!
Got it! Thank you!
Home›Tips & News›Air Travel›Why Airlines Like to Annoy You with Credit Card Pitches—and Why It's About to Get Worse 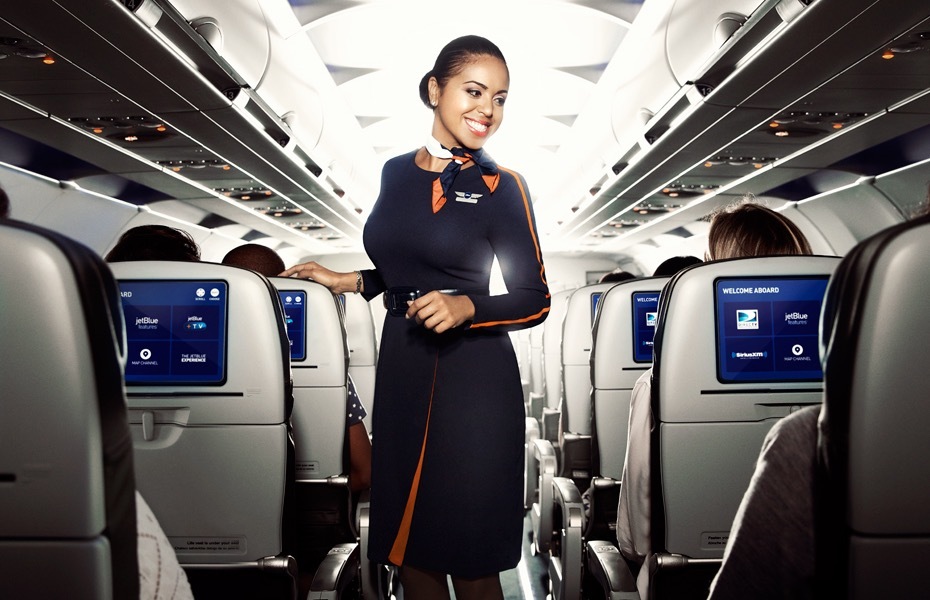 A researcher has calculated how much money U.S. airlines are making from in-flight credit card sales pitches, and the number isn't good news for peace and quiet.

The airlines are fond of reminding us that flight attendants are there primarily for our safety. Therefore, as we know, we must pay attention whenever they speak and heed every word they say.

So why—just as we're falling asleep or we're deeply engrossed in an in-flight movie—do they abuse that role by interrupting us with a loud, windy pitch to apply for the airline credit card?

The answer may further annoy you.

Flight attendants get on the P.A. and hassle passengers because they personally pocket cash whenever someone takes the bait and signs up.

Heather Poole, a career flight attendant and a New York Times-bestselling author on the topic, commented on the issue on her Twitter account this summer. She revealed how much flight attendants make for approved credit card applications. 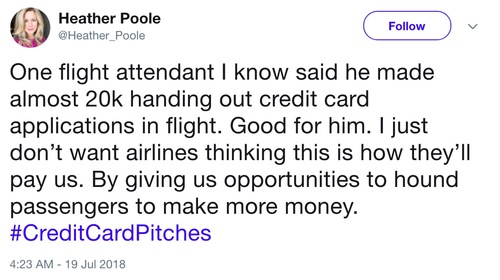 Poole is right—the airlines do hound us. They don't care if they're annoying us, pausing our movies mid-climax or otherwise ruining the flight experience, because there's so much money to be made.

The airlines don't make it easy to figure out exactly how much they're raking in from their credit card alliances, but, as reported by Inc., one marketing researcher thinks he has found a way to devise the answer.

By his calculations, the major U.S. airlines pulled in an astonishing $3.8 billion in the first half of 2018, mostly by selling the value of their frequent flier miles to the lending banks that operate their credit cards. American Airlines and United alone brought home a total in the neighborhood of $1 billion each.

That researcher, Joseph DeNardi, managing director of the boutique investment firm Stifel, Nicolaus & Co., believes that it's gotten to the point where the airlines' frequent flier programs are more valuable commodities than the airlines themselves.

And that has made disturbing passengers more valuable than allowing them to fly in peace. Flight attendant Poole has said that American Airlines pays a $50 bounty for each approved application that her colleagues turn in, and that United pays $100. The commission system has led to more distracting interruptions.

Worse, The Points Guy reports that false statements about card benefits are distressingly common. Flight attendants have been caught telling passengers that the cards grant them privileges that they actually don't, and they're reportedly banned from informing passengers about the cards' annual fees, transaction fees, or interest rates—anything, it seems, to make passengers take the bait and file those applications.

And the problem is about to get a lot worse.

United is aggressively increasing its in-flight pitch blitz by forcing all flight attendants to take a required computer training course on the practice. United no longer wants pitches to be made some of the time—it wants them all the time, strong-arming crew members to make these sales announcements on every single flight the carrier operates.

According to a memo to staff from the United executive in charge of in-flight services, "to accelerate this initiative, we ask that beginning September 1st, the Explorer Card announcement is made and applications are distributed on every flight, both domestic and international."

I have a warning for the airlines. The more they degrade the cabin announcements, the less passengers will pay attention to them at all, even when they convey important instructions.

And the more they degrade the flight attendants' roles by diluting their safety and service duties with marketing pitches, the less flyers will trust them, too.

It's a recipe for generating even more friction and potential danger in the cabin. I hope it's worth it to them.