Thank you for subscribing!
Got it! Thank you!
Home›Tips & News›Air Travel›Upgrade Bidding Tips: How to Game Airline Seat Auctions So You'll Win 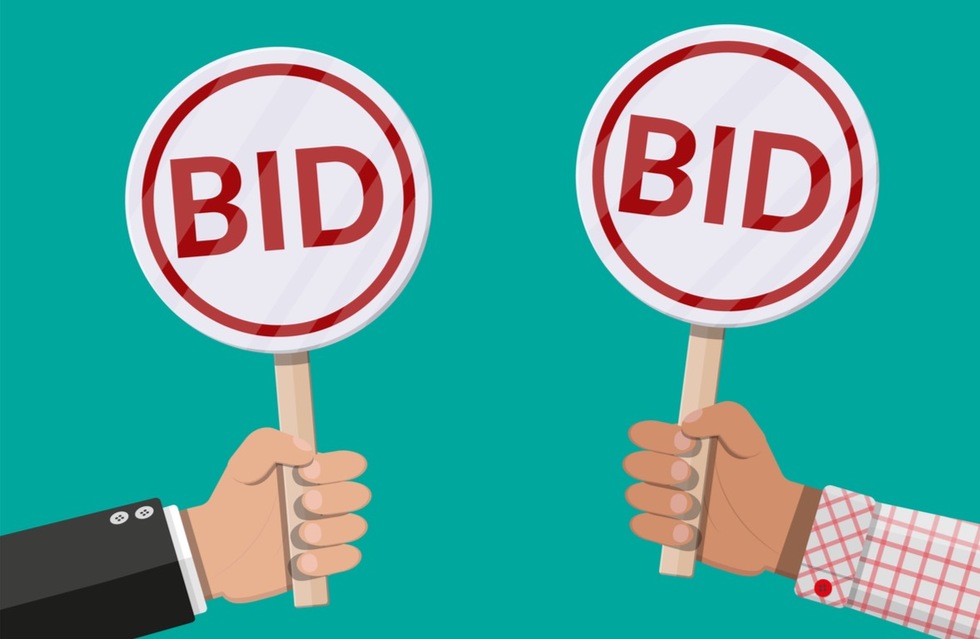 Some airlines now auction off upgrades to business class or premium seat assignments. Here's how to figure out what to bid so you'll be more likely to succeed.

If you’re not familiar with upgrade bidding for airline tickets, it’s time to learn about it, because it’s being used by an increasing number of airlines. Think of it like entering a virtual auction house where you offer to pay a bit more money (on top of your existing economy ticket purchase) in an attempt to try and get a coveted premium seat.

Why was upgrade bidding invented?

The simple answer: to make more money (off you). It’s an alternative way for airlines to sell otherwise unused/unsold seats at the front of the plane. Once upon a time, these cushy seats would have been given away for free to loyalty customers and elite status flyers. But for the last four or five years, this has been changing. They’d rather secure more income for those seats.

Is there any benefit to me?

Upgrade bidding programs, which are carried out before you even go to the airport, are theoretically supposed to give you more control over your situation so you won’t be stuck on a long standby list at the gate. The hitch is that it’s easy to overbid in your eagerness to score a better seat.

Here’s how it works: 72 hours before your flight (the usual time frame), you’ll either visit the airline website to place a bid or you’ll be contacted by the airline directly (usually by email) with a link to the relevant website link to place one.
On that page, the airline will usually set a minimum bid amount, and you can deviate from that as much as you dare. If you win the auction, you’ll be informed (it might not be right away) and your seat will be upgraded.
If you’re not sure if your airline runs auctions, travel enthusiasts such as Drew Macomber (of the blog Travel Is Free) keep track of which airlines do. Right now, there are about three dozen major carriers worldwide that offer it. None of the three major US airlines (United, Delta, American Airlines) do right now because their premium seats are usually fully sold through their frequent flyer programs.
However, quite a few major international carriers—including Cathay Pacific, Lufthansa, Virgin Atlantic, and British Airways—have gotten in on it, and that’s good, because having premium seats can make long flights much more bearable.

How do I make an educated guess?

Just like at an auction house, you’re placing a blind bid. You don’t know what other passengers are offering, so there’s guesswork involved—but it can at least be an informed one.
Michael Trager, a journalist who covers airline upgrades, says that airlines don’t go out of their way to help you with tips and advice because “they prefer to stay rather elusive on purpose…they want you to bid higher and they want you to assume that bidding higher will give you a better chance—which is not always the case.”
But these sites will help you gather useful tidbits of information:
ExpertFlyer: This site lets you see how full a flight is. The information isn’t foolproof, but once you know this, you can better “guesstimate” your bid and whether it should be high or low. If the flight is full, consider placing a higher bid. If it’s a pretty empty flight, you can feel safer placing a lower bid (or the minimum bid amount necessary).
SeatGuru: Lets you know the specifics of the “best seats” (taking in engine noise, leg room, and other comfort factors) and the plane model. The latter is quite handy to know; if you discover you’re flying on an older aircraft model, the upper seat classes usually won’t be as luxe as they are on newer planes, so it may not even be worth paying more for the upgrade. If this is the case, save your money and stick with economy class because that “premium” seat and cabin may be no better in terms of value and comfort.
FlyerTalk: It’s like Reddit for flyers. Trager says that “there are a lot of threads about upgrades and I find it very helpful. People share data points in a ‘geeky’ open-source manner.” This may be a deeper dive into the information than you want to make, but some regular flyers find it helpful.

How can I figure out how much to bid?

The biggest danger is bidding more than you would have paid to simply buy that seat to begin with. As told to International Business Times, travel blogger Bethaney Davies of Flashpacker Family offers this general bid guideline: "Calculate the regular cost of a business class seat, then subtract what you paid for the economy fare and aim for around 20% to 40% of that price.”
She offers an example: “A one-way fare from Brisbane to Singapore is $2,600, and their one-way economy ticket costs $500. So with a difference of $2,100, a good bid price would be between $420 and $840."
An additional strategy she offers is to bid slightly above the competition: “If, for example, the minimum bid is $500, your bid should be $550, as most people will offer the baseline amount required.
(I’ve noticed a recurring trend that for outbound flights away from North America, such as to Europe or Asia, I can almost always offer the lowest minimum bid and win. However, for inbound returning flights to North America, I’ve never won any bids within a reasonable budget; many more people are jockeying for those coveted spots and are willing to bid more.)
You cannot use cash or your accumulated miles to pay for an upgrade; it’s a credit card payment.


Is my bid affected by the flight’s destination?

There are no hard-and-fast rules, but your destination and number of daily flights there will help inform your bid. If your airline flies to a given destination once a day, consider increasing your bid amount, because competition is tighter. But if there are five daily flights to your desired destination, there are more available seats, so the strategy would be to place the minimum bid amount necessary.
On flights to cities that are major business centers, like London or New York, business class seats are coveted and usually snatched up by paying customers and loyalty members who get upgrades. So for flights that carry lots of business passengers, your bid has to be greater to begin with (e.g., if the minimum bid required is $700, people are already offering up at least $1,000 or more), so be prepared to shell out more for that seat. 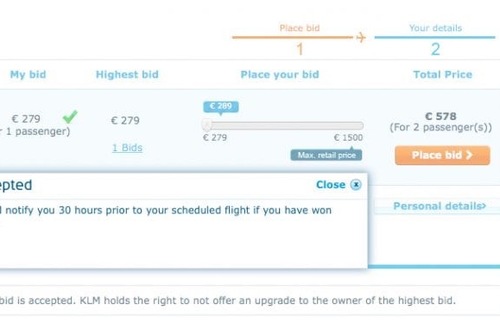 
Where can I place my bid?

In most cases, blind bidding will open on the airline’s website about three days before the flight takes off.
Another option is to place a bid through a third party app such as Plusgrade. That’s a travel tech company that brokers deals directly with airlines (and cruise lines) and provides them with software technology that passengers then use to bid for upgrades. Travelers are enticed to use Plusgrade instead of the airlines’ bid pages because it often partners with companies and brands to offer alternative ways to pay for upgrades (such as using American Express Membership Rewards points, which would be impossible to do directly with the airline).
Note that each airline operates differently in terms of how many fare classes you can jump. For instance, Air Canada will allow you to bid for business class even though you have an economy class ticket. However, for Cathay Pacific, you can only upgrade one class up (e.g., economy to premium economy). Therefore, at the time of your initial airline purchase, ensure you ask your ticket agent about this.

Play the waiting game. You’ll receive an email from the airline 24 to 48 hours before the flight informing you if you won your bid.
I didn’t get my bid.
Not to worry—your credit card will not be charged. You tried.
I won my bid!
Congrats! Look forward to a better meal, service, and hopefully sounder sleep. You’ll have to wait until you check in to select the actual seat, but if you want to find out which seats would be the most ideal, return to SeatGuru.

What else comes with my upgrade?

Priority check-in at the airport, priority luggage (which comes out first at baggage claim), and priority access to the security. Depending on the airline and the ticket, you still might not get access to the lounge, so it’s best to ask at the check-in counter.
With all of this in mind, you can now better “game” the airline bid upgrade system.
And a bit of good luck wouldn’t hurt either.
Air Travel
Money and Fees