Thank you for subscribing!
Got it! Thank you!
Home›Tips & News›Cruise›What's Better for Alaska Cruises: Round-Trips or One-Way Voyages? 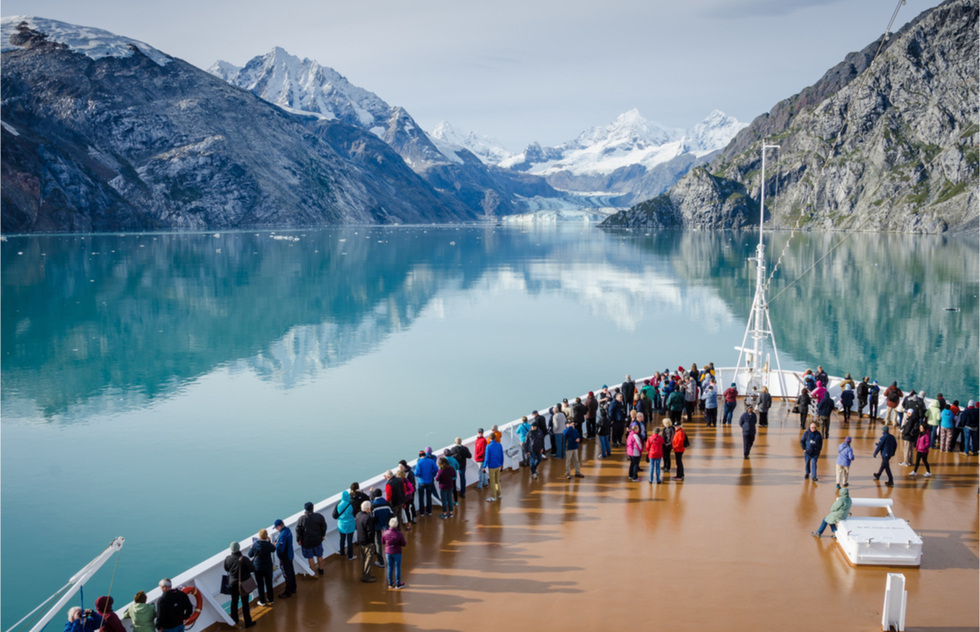 Cruise lines permit passengers on Alaska journeys to end their voyages in the state to continue touring. Should you—or should you get off where you began?

Let's get this out of the way first: No matter how you see Alaska, you're going to be blown away. Alaska was named for the Aleut word alyeska, which means "great land"—and the Aleuts weren't engaging in hyperbole.

But the type of journey you choose will affect how much you pay, how much time you get in the state, and what you get to see.

Here are some of the issues you should take into account when looking at your Alaska cruise disembarkation options.

What your airfare costs

On a per diem basis, there is virtually no difference between the daily cost of a looping route and a one-way cruise of Alaska. Both types of itinerary are offered by all of the major mainstream cruise lines (the luxury ships, with the exception of Oceania, usually only do one-way voyages), and price differences have more to do with your cabin category than your termination ports.

But what you spend on airfare will be very different, depending on the type of itinerary you choose.

Flights that bring you into one city to begin your cruise and out of a third city to return home (in industry terms, these are called "open jaw" flights) are almost always significantly pricier than round-trip fares between two airports.

That's doubly the case in Alaska, because one of the return legs will likely be from Fairbanks (which usually requires you to add a stop in Anchorage on the way home); or from Anchorage, which has fewer direct flights to the Lower 48 U.S. states than there were pre-pandemic, according to cruise agency owner Pat Webb of CruiseStar.com.

So if you end your cruise in Alaska, you're looking at additional air travel time—sometimes up to a full day in transit—and, Webb says, you might contend with odd schedules. Many flights from Anchorage tend to happen late at night, which adds to the inconvenience and may necessitate paying for a stay in a local hotel.

How much higher can the prices go than the cost of simply flying home from where you boarded the cruise? It will depend on your home gateway and the flexibility of the airline. In our price checks for summer 2022 airfares that went round-trip to Seattle from Chicago, we found that flights increased by $110 if we wanted to fly back to Chicago from Anchorage instead.

From Los Angeles, the price difference averaged $50, but from Philadelphia it was $152. Those numbers add up when you're transporting a family of four.

What you'll get to see

There are exceptions, but in general, round-trip voyages from Seattle or Vancouver will take you to southeastern Alaska. That usually means Ketchikan, Juneau, and either Skagway or a relatively new port called Icy Strait (it's a small island north of Skagway). For in-depth glacier gazing, you'll either visit Sawyer Glacier or Glacier Bay (pictured above); there are limited numbers of permits for the latter, so not every cruise ship goes to that famed national park.

On one-way cruises, you'll usually see more Alaskan ports than you can on a round-trip sailing because instead of spending the last few days doubling back to your origin port, you spend that time sailing deeper into the state. So with one-way cruises, you'll usually see the same places as on a round-trip voyage, including either Sawyer or Glacier, but you'll also see more locations north of those, including the area around Anchorage and College Fjord near Whittier (though of course destinations will vary by itinerary).

How much time you'll have

People who choose one-way sailings do so, usually, so they can add a tour of the interior of Alaska either before or after the cruise. They can either buy a land package from the cruise line or simply tour around on their own by car or train. Independent travel is surprisingly easy in Alaska, as I wrote in this piece about the joys seeing Denali National Park on your own.

So which type of trip is better? Webb said he tells his clients to look at the bigger picture and at what they want out of the trip.

"I ask them: How many times are you going to get to Alaska in your life?" he says. "Usually, the answer is 'once,' and when that answer comes out, the choice [to do a tour as well as the cruise] becomes clearer. Alaska is such a spectacular state that you just don't want to give it short shrift."