Thank you for subscribing!
Got it! Thank you!
Home›Tips & News›Entry Requirements & Customs›When to Start a Renewal of a U.S. Passport—And How to Sign Up for Online Renewal 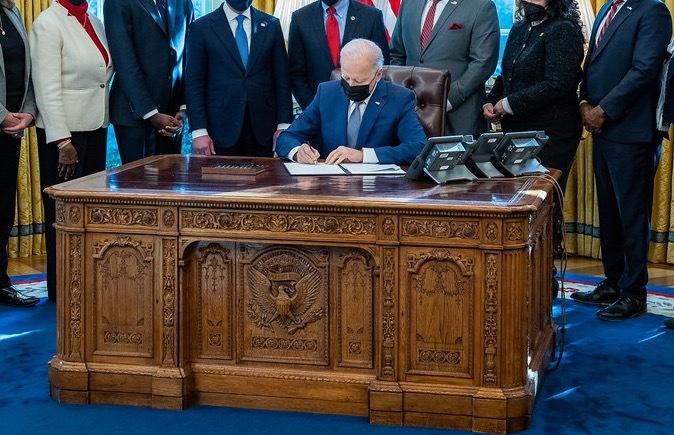 When to Start a Renewal of a U.S. Passport—And How to Sign Up for Online Renewal

Mail-in processing of passport renewal now takes as long as three months, so it's crucial to know how soon you can apply to renew. The good news: A new digital renewal process is on the way, and you can sign up now.

Although the event didn't get a lot of attention at the time, in December 2021 President Joe Biden signed a new executive order that will allow Americans to renew their passports online in a matter of days. That's a photo of him signing the order, above (see Sec. 4 of the official text).

That development is a big deal for regular travelers because until now, when a passport reached the end of its validity, citizens had to mail the old booklet to the government and wait for a renewal.

Sending an old passport away wasn't such a big deal when the turnaround time for receiving a replacement was only a couple of weeks. But now that the wait for processing can be as long as 11 weeks (according to the U.S. State Department's own estimates as of July 2022), sending your passport away for renewal makes it impossible to travel internationally for as long as three months while you wait for your new booklet.

So how come the wait is still so long if President Biden signed the order last December?

Because the executive order only started the process. It takes time to build new systems.

This particular new system is already being tested, as a matter of fact, but only on a subset of Americans. In May, the pilot program for digital passport renewal was rolled out to people connected to the U.S. Department of Defense: active-duty, reserve, and retired service members, as well as Defense Department civilians, contractors, and their families.

Even with online renewal, which doesn't require trips to the post office to mail documents, the State Department says citizens shouldn't plan any international travel within five weeks of submitting a renewal application.

The government is apparently being overly cautious with that advice, though. Some people are reporting that they actually received their new documents within 10 days of using the new online renewal portal.

Users of the portal must be 16 or older, and it won't work if you've changed your name or updated your gender status since the last passport. And you still have to take the dreaded photo of your face—only now, you simply upload the image instead of mailing it with lots of forms and your old booklet.

The new system hasn't been expanded to the general public yet, but there are signs that we're on the cusp of receiving it by the end of 2022. The State Department is now building a waiting list of non-DOD-affiliated citizens who'd like to be among the first to renew online. Contact information and general details about your eligibility (no personal information) are being collected at this link.

Here's the message that greets you when you sign up for the pilot: 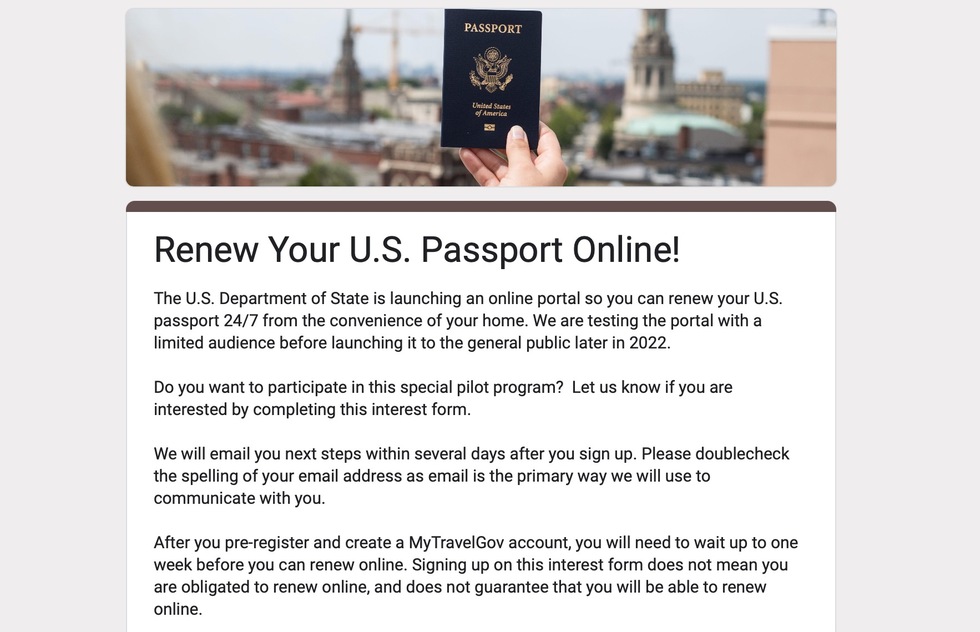 To be eligible to be invited to renew online, your current passport must have been issued at least 9 years ago, meaning there's less than one year left on its validity. You can also renew using an expired passport as long as fewer than 15 years have gone by, meaning it must have been issued between 2007 and 2013. On July 1, the U.S. government stopped honoring expired passports, which had been previously allowed for international travel because of pandemic-related processing delays.

Even if you aren't game to sign up to preview the digital renewal system, this year it's still a good idea to begin the mail-in renewal process when your existing passport hits the nine-year mark and there's a full year left until it expires.

Many countries require a passport to be valid for at least six months past your visit dates, so waiting until you have six months or fewer left will make it impossible to visit some destinations. But if you start your renewal at the one-year mark, which is the earliest the State Department will allow you to begin renewal, you'll ensure that you'll get your new booklet with enough time and space to keep it valid for most places.

Think of an adult U.S. passport as being good for nine years, not 10, because that final year before expiration is fraught with validity exceptions, and renewals are currently prone to delays.

Based on this timeline, we recommend that in 2022 you begin your passport renewal process when your existing document has one year to nine months left on its validity. Any later than that, and you risk not receiving your new passport in time to visit a country with a six-month validity rule.

Soon, though, the system that President Biden set into motion last December will be fully realized, and digital passport renewal will be a reality for most Americans. Once that happens, our conservative advice will become obsolete, and getting a new passport could take a matter of days, not months.