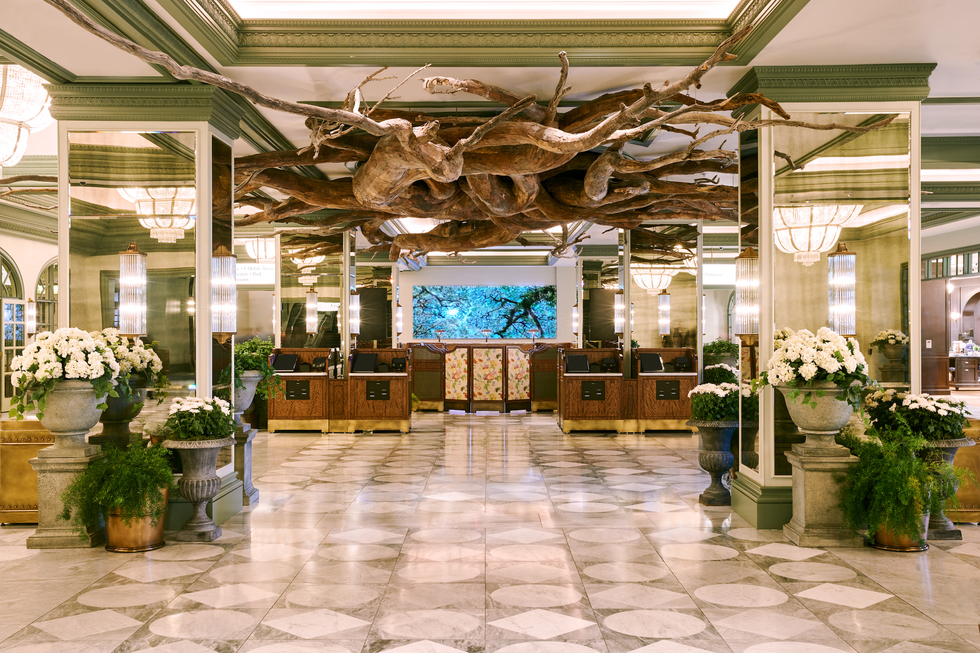 This spring, a new casino hotel on the Las Vegas Strip rises from the bones of an old one. Is it possible to give an enormous hotel complex a sophisticated boutique feel?

For many visitors, Las Vegas remains the ultimate place for an over-the-top weekend filled with drinking, dancing, dining, a fast-and-furious turn at the tables, and the inevitable hangover on Sunday morning. For some folks, where they lay their head down at night doesn’t even matter.

But the new Park MGM hotel, which was just built out of the old Monte Carlo Resort & Casino complex, seems to be trying not to be exactly like the others in town.

When the Monte Carlo first opened in 1996, it intended to bring the swanky atmosphere of the Monte Carlo casino in Monaco to the desert Strip. But over time, the Monte Carlo lost its luster, becoming just another casino hotel. That standing was further diminished when MGM Resorts built the modern CityCenter complex nearby, overshadowing the area with three new hotels and luxury shopping mall. Add that to the 2010 competition from The Cosmopolitan, a perennial favorite amongst cool kids, and the Monte Carlo was ripe for this sort of massive rebranding aimed at younger, sophisticated travelers.

Stepping into Park MGM is like stepping into the new Vegas. There’s no cheesy theme or imitation destination (no offense, Paris or Venetian). Because Park MGM is adjacent to MGM’s new-ish The Park outdoor entertainment district and Park Theater, where Lady Gaga will begin her residency in December, the outdoors and nature are loosely incorporated, but overall, the hotel resembles a stylish boutique hotel in New York or Paris rather than a giant casino hotel in the middle of the Strip.

The difference begins inside the small-ish lobby, which feels cozy compared to other behemoth casino lobbies, with marble floors, mirrored columns, touches of light green on the ceilings, glittery chandeliers, and fresh flowers. Not a slot machine in sight. (Don’t worry. The casino still exists—it’s just around the corner.)

The flashiest thing in the lobby is actually a giant tree root that spreads across the ceiling. It’s a far cry from the days when the boisterous Blue Man Group used to parade through the same space.

And gone are the dreaded check-in lines. Instead, Park MGM employees escort guests to kiosks that are designed to look like vintage clerk tables. Room keys are printed right here. There’s still a front desk to assist guests with room upgrades or paying in cash (this is Vegas after all), but despite the cool video art installation behind it, it’s not a giant checkpoint like at the rival casino-hotels.

Up in the guestrooms, the spaces are meant to New York City-style apartments more than corporate hotel rooms, and they are equipped with vintage-like furniture and lighting fixtures, picture windows with built-in settees, and artfully arranged prints.

Sydell, which counts The NoMad Hotels in New York and Los Angeles as well as The Line Hotels and Freehand Hotels amongst its brands, is known for rooms with individual flair, custom artwork (at those properties, often no two rooms feature the same prints), and interesting furniture.

With 2,600 rooms to redo at Park MGM, many furnishings and prints are repeated, unlike at Sydell’s other hotels, but the amount of detail in each rooms keeps them feeling unique. How long they will last amongst the usual Vegas visitor wear and tear is another question. 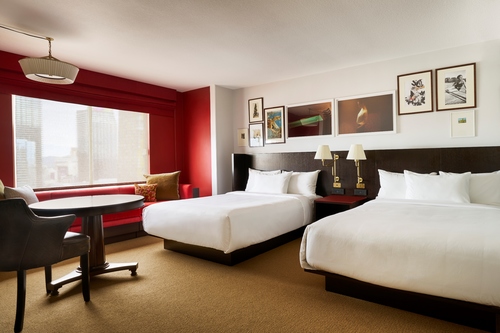 As part of the transformation from Monte Carlo to Park, MGM also closed several restaurants at Monte Carlo and opened two new spots: Primrose, an all-day dining spot just off the lobby that’s meant to evoke a South-of-France vibe (another nod to the Monte Carlo past); and Bavette’s Steakhouse and Bar, a sultry space for steak and craft cocktails.

Out back, Park MGM has upgraded the pool scene as well. The lazy river has been done away with and in its place are now three separate pools surrounded by lush greenery (including sustainable horticulture), plenty of lounge chairs, private cabanas, and three bars. One of the pool decks even flows into the backyard patio of the Primrose restaurant, giving guests the option of lighter fare while sunbathing, instead of the usual fried poolside foods.

Later this year, Park MGM will open The NoMad Las Vegas, a hotel-within-a hotel consisting of 292 guest rooms, a casino, a private rooftop swimming pool, and a NoMad Bar and restaurant from Chef Daniel Humm and restauranteur Will Guidara.

As for the casino, not much has changed on the floor. Gamblers will still find the usual array of slot machines and table games. In Vegas, only the hospitality is evolving.

One thing that is the same compared to other Vegas hotels? The resort fee. Park charges a steep $35 a night plus tax. And don’t forget that after that there’s also a parking fee of $15 for 24 hours. So guests will usually end up paying another $50 on top of the room rate.

During its opening period, room rates are actually pretty do-able. Mid-week prices are just $59 a night in April (plus those charges), while weekend starting prices hover around $150 a night. These will probably jump up when summer comes and the property's popularity picks up, so if you want a stylish Vegas stay at a good price, book it sooner rather than later.