Thank you for subscribing!
Got it! Thank you!
Home›Tips & News›Hotels›Tips for Booking a Hotel in Amsterdam 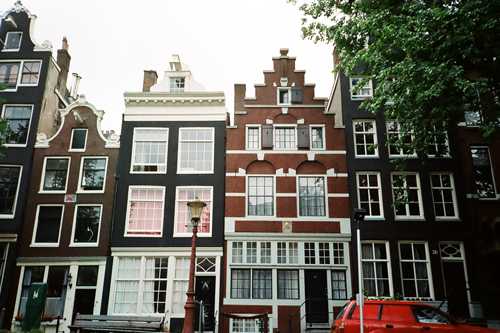 Tips for Booking a Hotel in Amsterdam

Navigating all of the accommodation choices can be a bit confusing. Which neighborhood? How many stars? What’s in the rooms? What’s a good deal? We're here to help.

Let’s start with the basics. Compared to other major European cities, Amsterdam is geographically teeny-tiny. You can walk from "top" (Centraal Station) to "bottom" (of the tourist zone, basically in the middle of the Vondelpark) in about 45 minutes. This swath of town covers almost everything that most travelers visit in Amsterdam. Compare that to London, Rome or (egad!) Berlin, and you’ll see why I call it teeny-tiny.

In terms of choosing a hotel, this means that really, almost every hotel in the city is “central”, will be easy to get to, and will give you easy access to the big sights.

2. Think twice before staying in the bulls-eye of the center.

When traveling around Europe, we tend to choose hotels that are as centrally located as possible. However, in Amsterdam, the absolute center of the city is Dam Square, an often chaotic spot surrounded by department stores, government buildings and tram stops. Nearby, the Red Light District is also about as “central” as it gets, but its streets, packed with bars, sex shops, and roving stag parties, are not a great fit for most tourists.

Instead, we’d recommend opting for something a bit farther out (yet still very easy to get to). It will be quieter and might have that canal view you’re dreaming of. Unless, of course, you’re part of a roving stag party!

3. Watch out for hotels around nightlife.

In addition to the nightlife options lining the raucous, neon-lit streets of the Red Light District, more mainstream bars and clubs cluster around a couple of squares, including the Leidseplein and the Rembrandtplein. If you plan to head out for some drinks or to see a show, chances are you’ll end up at (or at least pass through) one of these two squares.

Hotels cluster around both of these squares as well, especially on, and above, the Rembrandtplein. Unless your hotel has excellent soundproofing, budget hotels on these squares will be ideal only for travelers who plan to stay out late, can fall asleep to a thumping beat, or have great earplugs. Travelers looking for a quiet night’s sleep should look elsewhere—at least a few blocks away.

4. Okay, so which neighborhoods are ideal?

In terms of our favorite neighborhoods in Amsterdam for sleeping, we quite like the western and southern canal rings (referred to in our guide as Grachtengordel West and Grachtengordel South), which are still very much in the thick of things, but offer a bit more serenity, along with some charming canal-side rooms. Romantics will swoon for the Jordaan, a more residential neighborhood farther west of Grachtengordel West, today home to lots of great small restaurants and bars.

Another quiet option is the more studious Vondelpark and Museumplein neighborhoods. Finally, there’s the Pijp, a neighborhood that was once largely home to the city’s immigrant population, but is now also home to some of the city’s trendiest bars and restaurants.

5. Get ready to climb some stairs!

Most of Amsterdam’s central and small hotels are located in centuries-old canal houses that are protected by zoning laws, thus making it very difficult (if not impossible) for the hotel owners to add an elevator. A majority of the hotels we recommend in our guide do not have an elevator. It isn’t that they don’t want to add an elevator, it’s just that, in many cases, they can’t add one to the building.

But wait, it gets better! Many of the stairs are shockingly steep. We’re talking about open-the-front-door, laugh-out-loud, you-gotta-be-kiddin’-me, steep. There is some help to be had: Some hotels have devised ingenious rope-and-pulley systems to hoist your luggage up the stairs. Others will help carry your bags up for you. However, they won’t carry you up. If you don’t feel that you’re up for the climb of your life, book a hotel with an elevator.

Hotels that are situated in newer structures are much more likely to have an elevator. And by “newer,” I mean something built after the advent of “talkies”. Your best bet for finding an affordable hotel with an elevator is to head a bit outside the most central neighborhoods, as the buildings will be newer. Try the hotels around the Vondelpark.

7. Hotel rates can be unpredictable.

During the slower “off season” months, three-, four- and five-star hotels slash their rates to fill their rooms, making for some great deals. This has also made life hard for smaller budget hotels, some of which have closed or just shutter for the winter months. Bargain travelers looking for hotel deals should be pleased with their choices in these slow months: October, November, December (excluding holidays), January, February, and March.

9. Hotels try to make it up during the high season.

On the flip side, during the high season (late April – late September, plus holidays and special events), those same hotels inflate their rates substantially in order to make up for those cheapo winter months. And I’m not just talking about typical old “high season” rates. Because of the slashed low season prices, hotels have to make up lost revenues like never before—which they do during the summer.

Note that by “high season” we mean the late spring, summer and early autumn months. However, this also includes major holidays and special events. This includes music and theater festivals, gay pride, the city’s marathon, and business conferences. Dates change every year, so it’s best to check the list on the city’s tourism site.

Read the full version of this article on EuroCheapo.com, which includes five more points that will help you choose your hotel in Amsterdam (including information on what to do if all of your options seem too expensive). Also, click to see our list of recommended budget hotels in Amsterdam.
Hotels
Local Experiences
Money and Fees