Thank you for subscribing!
Got it! Thank you!
Home›Tips & News›News›$7,500 Fine for Using a Phone on a Plane, Transgender Tourist Detained in Dubai, and More: Today's Travel Briefing 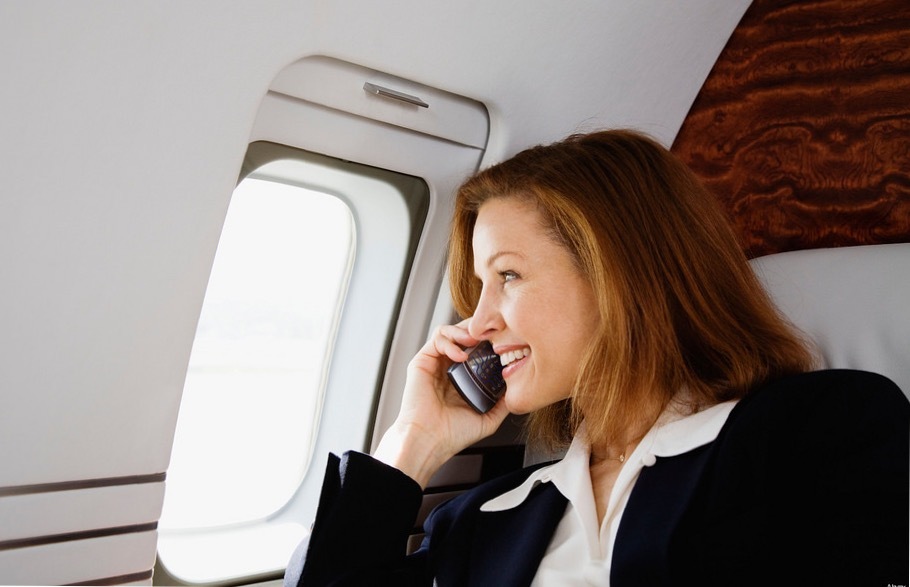 $7,500 Fine for Using a Phone on a Plane, Transgender Tourist Detained in Dubai, and More: Today's Travel Briefing

China's not putting up with any more monkey business, do you hear? A draft amendment to the country's Civil Aviation Law calls for fines of up to 50,000 yuan (USD $7,535) for passengers who turn on their mobile phones or other electronic devices.
The rules may have softened in the United States, where aircraft tends to be equipped with anti-interference systems, but in China, where incidents of air rage and rude behavior are taking off along with its planes, the government is getting stricter. Among the other formal bans called for in the amendment: sitting in someone else's seat and smoking on aircraft. Those seem pretty reasonable to us. China has been suffering from an epidemic of airline thuggery lately. In Shenzhen in June, a check-in clerk was savagely beaten by an angry passenger when she refused to print out an itinerary without seeing I.D. The same week, two men beat up cabin crew for being asked to vacate first-class seats even though they had only paid for economy.
The amendment also cracks down on a slew of additional prohibitions that were not yet explicitly banned. Believe it or not, those include breaking into cockpits, opening cabin doors during flight, hijacking planes, taking arms on board, making hoax threats, and taking hostages. All of them have technically not been declared illegal yet on Chinese planes. Goodbye, burning straw and releasing birds near an airport. Farewell, carrying dangerous goods—that'll get you slammed with a USD$150,000 fine.
The last set of civil aviation laws were enacted in 1996, when Chinese citizens were more compliant and well-behaved, and the government hadn't felt the need to explicitly ban them until now, because the threat of being forbidden to travel for two years was deterrent enough. No more. The best way to punish modern Chinese citizens, the government has decided, is now through cash. Chinese people have until September 6 to complain about the strict new rules, but after that, they could become law.

She'd better be calling her lawyer.

Canadian transgender YouTube personality Gigi Gorgeous says she was was detained in Dubai's airport, interrogated for five hours, and summarily denied entry to the United Arab Emirates. An airport security agent in Dubai told her that he was informed that she was transgender, she says, and in a strong reminder that full North American freedoms cannot yet be exported to other parts of the world, she was rejected and sent back home. There remains a dispute about her paperwork: While Gorgeous said her passport clearly lists her as female, airport authorities claimed it lists her as male.

Gorgeous was not engaged in any crime that a Canadian or American might recognize. The UAE's official reason? "Imitation of women by men" is illegal in there.

Interesting side note about that explanation: Tonight at McGettigan's, an Irish pub in Dubai, they're screening Mrs. Doubtfire, a movie starring Robin Williams imitating a woman, as part of the bar's Monday Movies series at the Jumeirah Lake Towers. No police raids are expected.

Dubai and nearby Abu Dhabi desperately want be taken seriously as players on the world stage, but Western visitors should be aware that freedoms still lag far beyond those cities' abilities to purchase modern trappings. Transgender travelers can take Gorgeous' experience as a warning about vacationing there.

After only a year and half on the market, Booking.com is euthanizing Booking Now, its app specifically designed for last-minute hotel deals.

When it was released in January 2015, Booking Now was hailed by publications such as Wired as a probable silver bullet to slay reigning last-minute hotel deals app Hotel Tonight. It even expanded development to include iOS, Android, and the Apple Watch. But despite the fact the Booking Now app often delivered lower rates than Hotel Tonight, it never made a dent in the category as hoped.

Among the problems: Brands such as Hotwire and Priceline were better established as options for deep last-minute blind hotel deals; there was some confusion in the marketplace with the standard Booking.com app; and Booking Now suffered from a clumsy user interface, which required shoppers to sift through last-minute deals page by page rather than in a consolidated, one-glance format.

Users of the Booking Now app are now greeted with a welcome screen that gives functionality a D-Day of August 31, 2016, and a claim that the company "decided to focus on making our main app better than ever!"  Access to last-minute deals via Booking.com does not appear to be completely lost: Frommer's comparisons indicated that the last-minute prices shown on Booking Now are also showing up in the inventory offered on the standard Booking app. 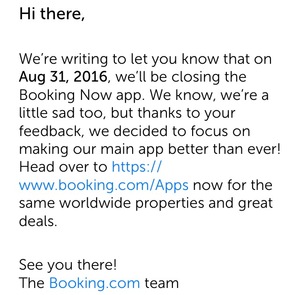