Thank you for subscribing!
Got it! Thank you!
Home›Tips & News›News›Hacking into Airport Lounges, the Flintstones' Bedrock For Sale, and More: Today's Travel Briefing 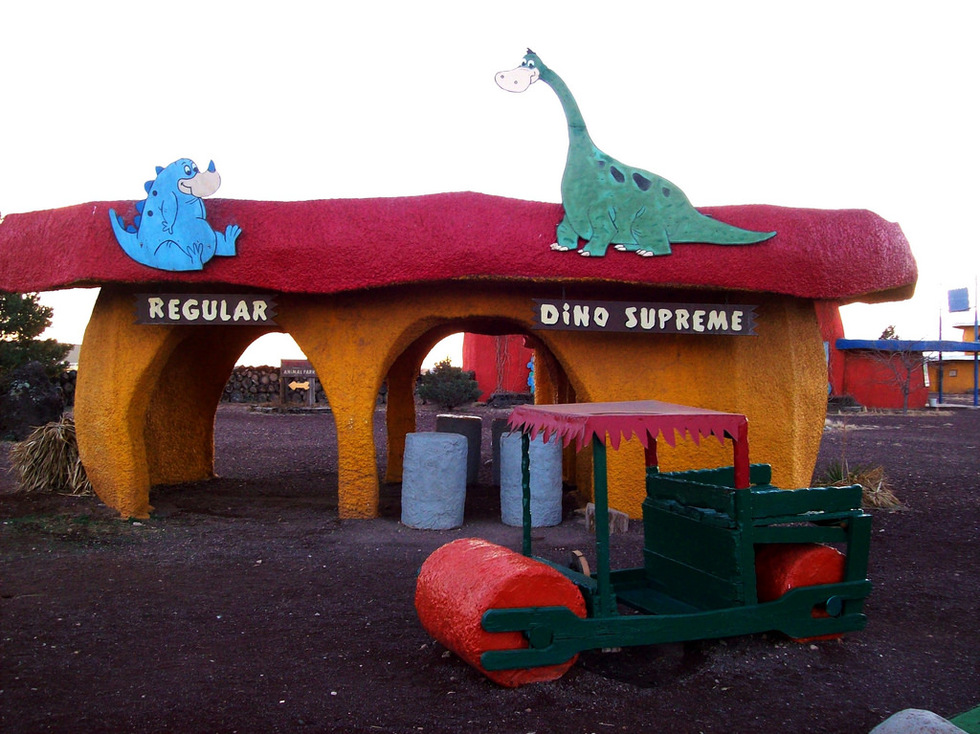 * 30-ACRE RE-CREATION OF THE FLINTSTONES' BEDROCK FOR SALE (BedrockAZ.com)

It’s a real estate opportunity that comes along once in a Stone Age: You can be the proud owner of a full-scale, real-life version of Bedrock from the classic animated sitcom The Flintstones.
The 30-acre spread, a master architecture class in mid-century Road Trip Folly, comes complete with a gift shop, a diner serving 5¢ coffee, RV park, campground, and a full-size brontosaurus with a slide built into its tail.
Bedrock City was opened in 1972 at the junction of highways 64 and 180 near Williams, Arizona, to capture tourist traffic headed from the Interstate to the South Rim of the Grand Canyon. Back then, the groundbreaking show, which originally ran from 1960 to 1966 on prime-time ABC, was beloved by adults and children alike and played in heavy rotation in syndication on UHF channels. But now the Flintstones are a part of American consumer prehistory and the family that has run Bedrock City for 44 years is, understandably, over it. It’s asking $2 million for the plot, as-is, including their four-bedroom home, so they can clear out.
Many of the concrete, hovel-style structures, sculptures, signs, and dinosaur sculptures are crumbling into pebbles after nearly 45 years under the desert sun, which makes it feel more like a ghost town (or a grim archeological discovery of primitive suburban man) than a thriving animated community. And here's the catch that has kept it on the market for a few years: The new owner won’t be able to keep the Flintstones branding—that license expires upon resale.

Still, some 5 million people drive past on their way to the Grand Canyon each year, which perhaps makes this roadside attraction a perfect fixer-upper for a buyer who has an inspiration to yabba-dabba-do it.


Ever gazed longingly at the door of an airline business class lounge when you were only carrying a pathetic economy-class ticket? Polish computer security expert Przemek Jaroszewski has—and he hacked his way past the velvet ropes.
Jaroszewski, a frequent flier, figured out that most airport lounges don’t actually cross-reference passengers with actual bookings. They merely scan codes printed on tickets. So he created a simple Android app for his personal phone that can generate a QR code that encodes a false name (he used “Bartholomew Simpson,” nudge nudge) but bears a real flight number with an executive-level class code. That fake code can be scanned by receptionists to gain entry to frequent flyer lounges, where he can read all the free newspapers he wants. It’s also possible to make multiple duty free purchases using the spoofed code, because shop registers don’t cross-reference with actual bookings, either.
Jaroszewski, who divulged his discovery at a hacker convention in Las Vegas last week, swears his hack was merely an exercise—he has only tried it in Europe and he claims he’s not making his app available to the public. The two things it can't be used for are security checkpoints and boarding, because those do require a confirmed reservation—but Jaroszewski warns that would be possible with a little more hacking.
“Boarding passes have become almost entirely bar-coded,” he writes. “And they are increasingly often checked by machines rather than humans.” Until that’s fixed, anyone can fake their way into an airline frequent flyer lounge—and no tiny bottle of liquor or half-eaten bowl of stale pretzels will be safe.

Terror has a new name: Zhangjiajie. This destination in China’s Hunan province was previously known for its stunning mountains. But now, with this week’s opening of the “Coiling Dragon Cliff” skywalk, adrenaline is the main attraction. The five-foot-wide glass walkway clings to a cliff on Tianmen Mountain, petrifying those who dare to amble along its 110 yard length with views of the perilous 984-foot (1,519 m) drop directly underfoot.
The vertiginous thrills don’t end there. Cable cars have recently been constructed to dangle visitors along a trip from the local railway station to the top of the mountain, and a glass-bottom bridge is under construction high above the Zhangjiajie National Forest, which surrounds the new skywalk.
So now, in addition to being famous for its dramatic mountains, Zhangjiajie may acquire new fame. It could very well be known as the pants-wetting capital of the world.