Thank you for subscribing!
Got it! Thank you!
Home›Tips & News›News›How to Identify Flights Overhead and Ships at Sea for Free Using Your Smartphone 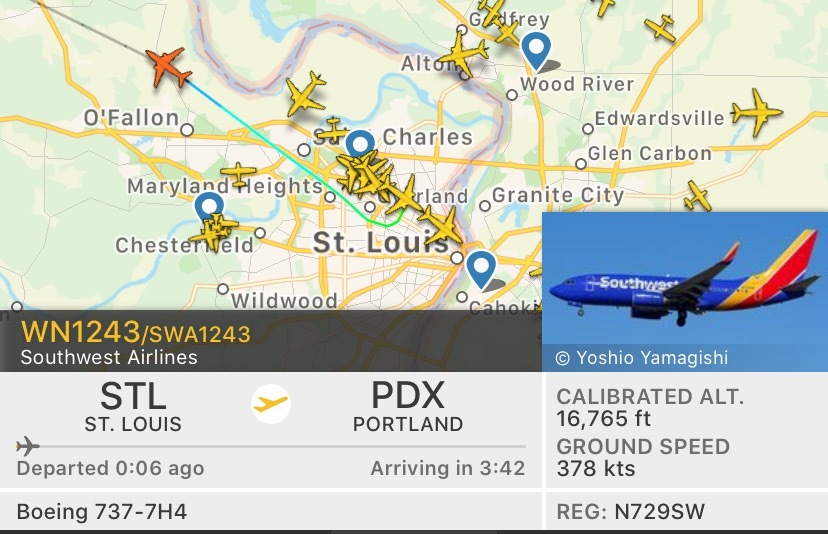 Free apps and tools let you identify the airplanes you see in the sky and the ships sailing in the ocean.

If you're going to stay home, you could at least travel in your mind.

Look up. See any planes? If you want to know about the jets you spot, you don't have to squint through binoculars to decipher the paint on the tail. Your phone can tell you the airline, the type of plane, where it's going, when it took off, its altitude—even if it's running late.

For laymen, a few apps will do the trick. All of them skim information from air traffic control systems to give you an accurate report of what's in the clouds at this very second. For airplane nerds, most apps have paid versions that eliminate ads and enable more sophisticated features, such as animations of flights using aerial images. But the free versions get you what we describe here. If all you want to do is satisfy your curiosity about what's happening over your head, you don't need to shell out extra.

Since the apps are free, you can install as many as you want and keep only the ones you like best.

This one has been online since 2005; the app version debuted in 2009. You can always find active flights on the FlightAware website, but the mobile app localizes the search from the start, making it much easier to point out aircraft flying above you.

When you open the app with geotracking enabled and click the location triangle icon, a map appears showing where you are. Pinch and zoom in to narrow down your scan to your neighborhood, and tap on a plane or helicopter to learn about that aircraft. For busy cities, the default display, which traces flight paths, can at times look like a bowl of noodle soup, but, on the other hand, it's helpful to see at a glance where planes are headed.

Though it ranks perennially among the most downloaded of flight-spotting apps, Flightradar24 looks (for the free user at least) pretty much the same as FlightAware. Which one you'll prefer will come down mostly to aesthetics. When you tap a plane on Flightradar24, the flight route appears as a subtle line (pictured above). Tap the results window, and you'll be shown fuller information for that flight.

Some information of interest to power users—such as the age of the aircraft and its vertical speed—is hidden behind a gold lock icon unless you pay to upgrade. But the free information will be plenty for most people.

Around since 2009, this app is simple to use and easy to understand. Although there's a website version, just like the others, you'll navigate the data faster using your phone.

On Plane Finder, flight paths don't automatically appear in the default display setting. Some users prefer that because it removes all that visual clutter. Tap on an aircraft to see its past and planned flight path. The lurid coloring is also preferred by some since it makes the route extremely obvious. Other apps use a simple thin line that might fade into the background.

For all the apps, if you tap a plane and an airline name isn't available, that might be because the flight is privately operated or it's for cargo of some kind.

Technically, iPhone users don't even need to download an app. They can simply ask Siri, "What planes are above me right now?" and an answer screen will pop up. But the details Apple supplies (via partner WolframAlpha Viewer) are dry, mechanical, and tough for a casual user to decipher.

It's much more fun to use one of these graphically compelling apps—and since they're free, you might as well.

For boats and ships

When you're done craning your neck and inspecting the clouds, turn your eyes to the sea. You can also use your phone to I.D. vessels on the water.

One of the leaders in this category, MarineTraffic, sells a full-featured, deep-diving, obsessives-approved app at the App Store ($5) and Google Play ($6). But as a novice, you'll probably be satisfied with the free Ship Finder Lite app (App Store only).

Ship Finder Lite works just like the plane-spotting apps. If you see a vessel you want to know about, tap it on your screen. The app serves an ad upon every fifth tap, and with all the pleasure craft, tankers, cargo ships, and tugs in the water, using Ship Finder Lite can get pretty chaotic. If you want to dispense with the ads or if you just want to use the app to pinpoint the current whereabouts of ships you already know the names of, you'll have to pay $5 to upgrade to Ship Finder, minus the "lite."

Some people couldn't care less about fishing boats and are only interested in finding cruise ships. In that case, CruiseMapper (pictured below) is the choice. The website version offers plenty of features (like an archive of deck plans) that have little to do with tracking, but the mobile version (App Store, Google Play) is satisfying in its simplicity, as it tracks the movements of cruise and passenger ships alike. 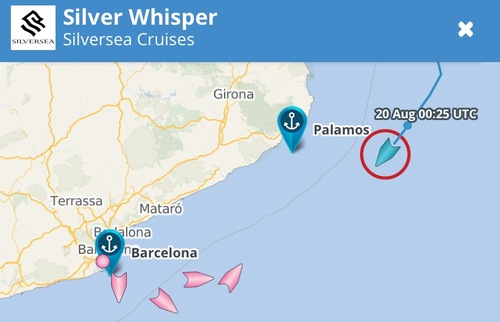 If a ship is not amid an active journey, it might appear as a dot at port. But when the vessel is under sail, its icon takes the shape of a boatlike arrowhead. Tap on a ferry, and you'll see a messy zigzag tracing its recent runs across the map.

Try to keep your chin up as you explore. A virtual voyage is lots of fun—until you discover a ship you've loved has returned to the Barcelona sun while you're home procrastinating a trip to the grocery store. But fret not. You'll be back out there traveling again in no time.