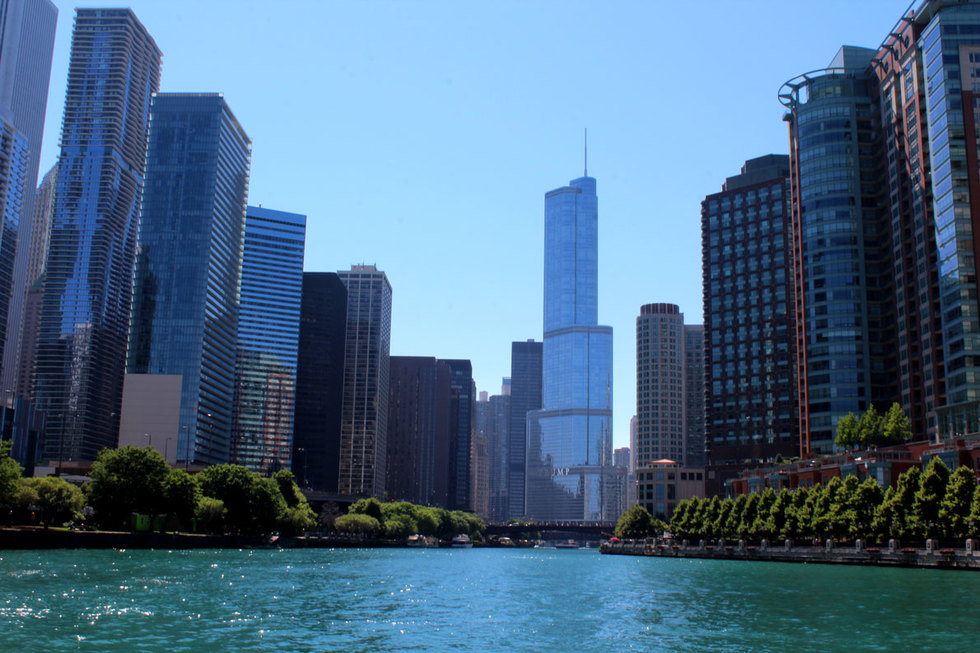 Well, folks, we finally made it to Election Day 2016. Don't forget to vote! If you aren't sure whether you're registered (and in some states you can still do that today) or don't know where your polling place is, you can look up that information by clicking here.

And speaking of the election . . .

You can add Chicago tour guides to the list of people made miserable by the 2016 presidential election.

The city’s popular architecture cruises drift past a number of pioneering buildings flanking the Chicago River (pictured above). And one unavoidable skyscraper on the itinerary happens to bear the name of a certain polarizing presidential nominee spelled out in giant letters on its side.

“It is stressful going by Trump tower,” a riverboat docent named Charlie Vergos told the Chicago Sun-Times. “You have to kind of calm everybody down preemptively.”

Some passengers clap, he says. Others boo. Everybody tenses up.

In more extreme cases, people have been known to give the building the finger, chant “build the wall,” and ask about burning the place down. One guy gave it a Nazi salute.

Other guides who spoke with the Sun-Times said they’ve tried to defuse the tension with humor, stay above the fray by focusing on the architecture, or flat out plead with passengers to leave their politics at the dock.

What’ll happen on the tours after the election?

Says guide Billy Dean: “If [Trump] wins, [the tower] becomes political forever. If he loses, I’m going to make fun of it. I don’t know what it is about the American spirit, but the second someone’s a loser they’re totally fair game.”

Until this month, Ethiopian tourism had been on the upswing.

The European Council on Tourism and Trade named the country the world’s top travel destination in 2015, and it was on track to receive more than a million tourists this year for the first time ever.

Then, violent antigovernment protests erupted all across the country, causing the government to declare a six-month state of emergency. Both the U.S. and the U.K. have issued warnings advising against any nonessential travel there.

The violence and the advisories could have a dire impact on Ethiopia’s fledgling travel industry, even though the primary tourism draws—including archaeological sites, national parks, and mountain ranges—are far from the areas experiencing unrest.

The country’s optimists are hoping that the state of emergency will be lifted earlier than planned, before the tourism boom goes completely bust.

An increasing number of business travelers are making the switch from taxis and rental cars to ride-hailing services like Uber and Lyft, according to a report from Certify, a company that makes software for managing travel expenses.

Analyzing more than 10 million receipts for ground transportation from the third quarter of this year, Certify found that Uber and Lyft accounted for the majority of those expenses (52%) for the first time ever.

"We continue to see interest in the ride-sharing economy," said Certify CEO Robert Neveu. "Small to medium businesses were the early adopters. Now, more Fortune 500 companies are adding them to approved vendor lists."