Thank you for subscribing!
Got it! Thank you!
Home›Tips & News›Money and Fees›Can We Talk About Those Ridiculous Game Show Vacation Prices? 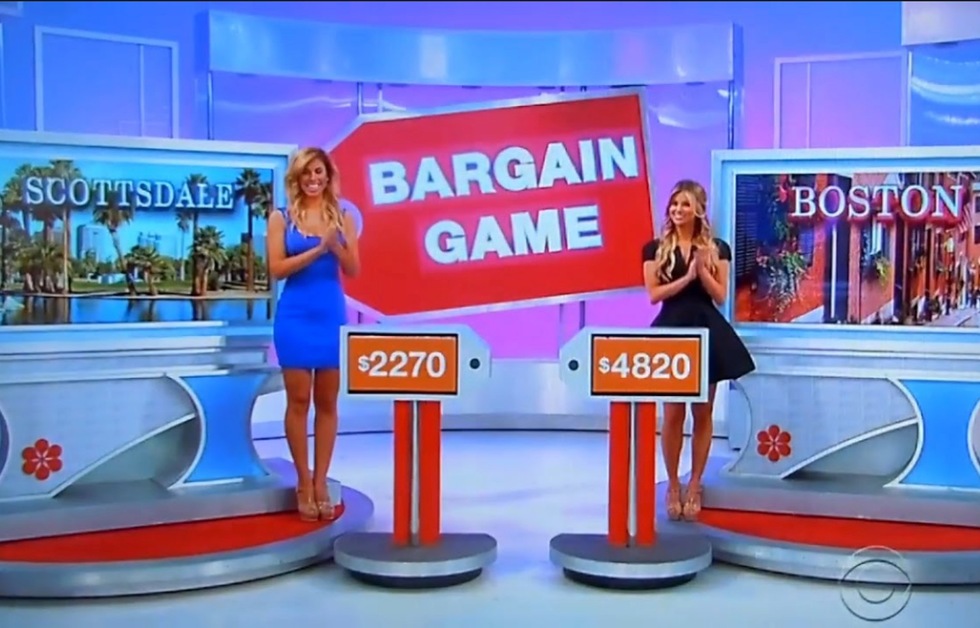 Can We Talk About Those Ridiculous Game Show Vacation Prices?

When it comes to the cost of a vacation, the price is not right on TV game shows.

When I was a kid, I secretly loved sick days, because they meant I could stay home from school and watch The Price Is Right. As it turned out, that was ruining my education in more ways than one. Because of how ridiculously expensive the show's vacation prizes were, I grew up thinking that travel costs way more than it does.

I wised up, but the inflated numbers haven't changed. Flip on the game show of your choice today, do a little back-of-the-envelope arithmetic, and you'll see what I mean. No matter how mellow and sensibly priced the destination city is in the real world, in Game Show Land, it'll cost as much as your parents' first house to get there.

A recent episode of Let's Make a Deal pitched a four-night package at the all-inclusive Sandals Ochi Beach Resort in Jamaica as being worth $10,014. But on the Sandals website, even in the high season of January, a four-night stay actually costs from $2,171. Upgrading to a Honeymoon Villa suite with a private pool nudged the ticket up to $4,775—and even that price dropped back down to $2,120 once promotions kicked in. (The contestant chickened out and got mani-pedis for a year, priced about the same.)

Over on Wheel of Fortune, a London and Paris vacation from Collette Tours, including "dinner at the Eiffel Tower," recently elicited cheers and gasps when it was revealed to be worth $9,998. But the company's website prices a package that offers exactly those elements at $2,100. Even doubling the price by adding a companion and airfare (game shows almost always only offer coach class) can't bring the trip near the alleged cost.

And on The Price is Right, a contestant named Neal had to figure out whether $4,820 was the right price for this prize: two round-trip tickets from LAX to Boston, six nights in a Premier room at the Colonnade Hotel, and one free dinner. If Neal had a laptop on stage to check the airline's and hotel's own prices, he might have guessed that sum was reasonably close, because he would have found that even in the leaf-peeping high season of October, all the major airlines were charging only $227 round-trip and the six-night hotel stay in a Premier room would cost $3,438, bringing the total to $3,892. But then host Drew Carey said the show's price wasn't correct. The professed actual retail price of the holiday turned out to be $6,020. Unless that free dinner normally costs $2,128, there's no way to make the math work. Fortunately, Neal won anyway.

But it's so easy for contestants to get confused about travel prices. The players on The Price is Right's Contestants Row recently sputtered out a befuddled range of shot-in-the-dark guesses on a measly two-night trip to Pismo Beach, a three-hour drive up the highway from the CBS studio. $1,100? $2,400? $1,101? $2,401? Wrong, all of them: That two-night stay was said to be a hefty $2,902. (It did include daily breakfast, but still.)

Disclaimers in each show's credits go some way toward explaining what's going on. The prices they quote are not what you'd usually pay in the real world, and you're told so in the fine print. From the end credits of The Price is Right: "All prices are the suggested manufacturer's or supplier's retail price unless otherwise announced."

Game show rates may be as high as these vacations would ever legally go—but there probably will never be an instance in real life when you'd pay that much.

In point of fact, the game shows themselves usually pay nothing for these prizes. Technically, they're free or almost free—and the producers even tell you that, too, in the credits. From Let's Make a Deal: "The Following Suppliers of Products or Services Have Furnished Them Free or at Less Than Retail," followed by a list that will usually include the operators of the hotel, airline, or vacation packages offered as prizes in that day's episode. The travel sellers donate the prizes for the publicity.

For TV producers, travel is the ideal spoiler bid. Like the bottle tops in a carnival midway ring toss, they're designed to force a contestant to blow it. Unlike floor polish or frozen peas, vacations are assigned maxed-out fantasy numbers, and no player can reasonably predict how much they really cost. They cost whatever the travel sellers claim they do.

That's why on game shows, vacation packages are the perfect way to force a player to bet against the house and lose.

So don't take game shows at their word on travel costs—and whatever you do, don't allow the bogus numbers that fall out of Drew Carey's mouth to make you think you can't afford to go somewhere exotic. Or to Pismo Beach.