Thank you for subscribing!
Got it! Thank you!
Home›Trip Ideas›Arts and Culture›In Curaçao, a Wondrous Cathedral Constructed Out of Thorns 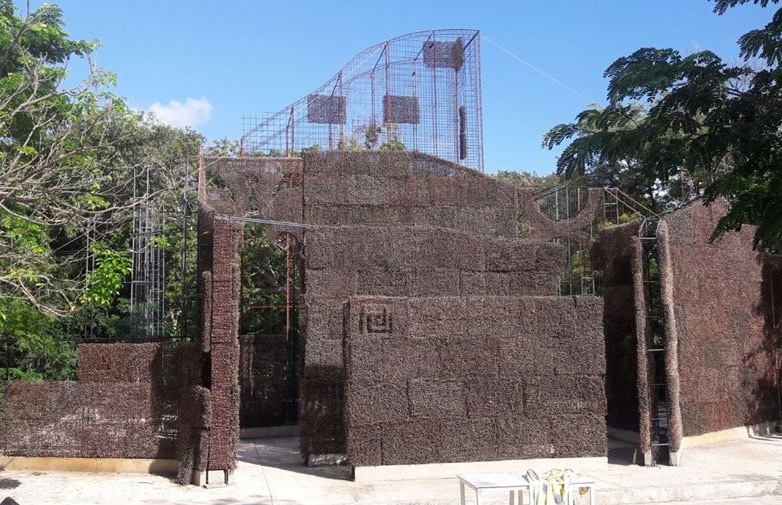 In Curaçao, a Wondrous Cathedral Constructed Out of Thorns

On this Southern Caribbean island, an artist is transforming a ferocious local plant into a thing of beauty and grace that you can visit on your next vacation.

The island of Curaçao has soft sand beaches and sapphire Caribbean seas, but much of the land is dry and scrubby. The prevailing vegetation? Thorns. And not the dainty briers of the delicate rose, either. Curaçao's thorns are big and spiky, the kind that flourish in parched desert conditions.

But acacia tortuosa is more than just a desert shrub—in the hands of Herman van Bergen, it becomes the stuff of art. For years, the celebrated Dutch artist has crafted impressive figures, lamps, and sculptures out of the tree's thorns. But his latest artistic project is his most ambitious: an entire cathedral.
Begun in 2012, Curaçao's Cathedral of Thorns (Landhuis Bloemhof; Tues–Sat 9am–2pm; cathedralofthorns.com/de-visie) is a prickly labyrinth that visitors can explore. Amber LED lamps softly illuminate the thick crosshatched walls while mirrors reflect the warm light. Although the site is still a work in progress (completion is forecast for late 2018), the framework is in place—measuring 20m by 20m (65.6 ft. by 65.6 ft.) and rising 10m (32 ft.) at its highest point.

Its form was inspired by the island's El Indjun rock formation. The cathedral, a piece of art and not a seat of clergy, is the centerpiece of Landhuis Bloemhof, a 3-century-old manor house that is now a vibrant arts complex with artist workshops, a museum, and a cafe.


Realizing the artist's vision has become a community endeavor, with van Bergen enlisting the help of local underserved youth, some working on the construction and others scrounging for thorns, known locally as sumpiñas.


One would think that suffering for your art is a given when your medium is thorns. But van Bergen and his team don't even use gloves. "It only takes an hour or so to get comfortable working with the thorns of the acacia tortuosa," he says. "You know that goats eat the small leaves between the spines without hurting themselves? Last year the goat was our employee of the year!"

The team assembles the needles in mallen (molds) to make bricks to build with. Branches are woven into lacy blocks, and then walls are built block by block on welded iron frames, their forms inspired by the arches of religious buildings from 2,000 years ago to today. The way the spines are asymmetrically knit to the branches makes them easy to hook onto one another, and patterns are repeated. More difficult are the reliefs intertwined along the inside walls, made by "painting" with different colored branches—mahogany red branches harvested from the south side of the island, light gray from the north, and purple found at Bandabou, on the west side. 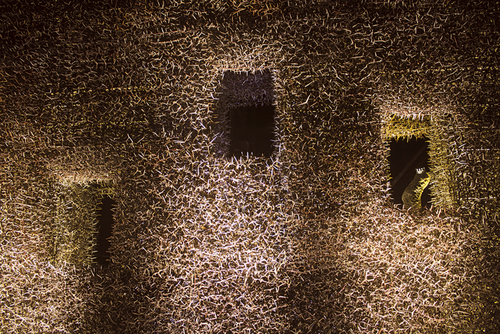 For van Bergen, the thorn cathedral honors the Native people and African slaves ensnared in the island's brutish history. The thorn bushes flourished after the island was deforested by European settlers, who oversaw the annihilation of Native tribes and cut down Curaçao's indigenous hardwoods for shipbuilding. The colonists—first Spanish explorers and then the Dutch West India Company—turned Curaçao into a 17th-century hub for the slave trade.

"The thorns symbolize our bad way of treating our host, planet Earth, and the way we treat each other," says van Bergen. "The thing we have in common is our bad side, but also the miracle to be alive. The lights within the walls represent this miracle of existence."


A Curaçao resident for nearly 30 years, van Bergen envisions his creation as a major artistic hangout for the region, with built-in recesses for rotating artwork and a stage in front for music, dance, and theater—much like the activity around European cathedrals in the Middle Ages.

"Every island has its beaches, seas, and underwater life, but it is on shore with your culture that you make the difference," he says. "Out of nothing you are able to create paradise."
Arts and Culture
Beach & Water Sports
Local Experiences