Thank you for subscribing!
Got it! Thank you!
Home›Trip Ideas›Arts and Culture›London's Tate Modern Built the City's Best New Observation Deck—And It's Free!

Tate Modern was already one of the most popular tourist attractions in Europe, but with the addition of its Viewing Level, the city itself becomes a visual feast.

Tate Modern changed London forever in 2000. That's when a dilapidated old power station on a dreary, semi-industrial stretch of the River Thames' southern shore was refitted to display of the country's contemporary art treasures. Crowds flooded to see the spectacular conversion, and seemingly overnight, London's riverfront was rediscovered by tourists and locals alike. By 2015, the Tate was attracting nearly 5 million visits a year.

But even its cavernous halls were not enough. In 2016, over budget and over schedule, Tate Modern opened a second building—Switch House, a 10-level tower with galleries, offices, and a restaurant, was attached to the existing former power station, which was renamed Boiler House. You can see Switch House, clad in brick behind the darker brown Boiler House, as seen from the Thames.

Yes, Tate Modern is still packed from cellar to rafters with the cream of contemporary art, from Mark Rothkos in the Boiler House to experimental and performantive works in the former fuel tanks under Switch House.

But there's one other new attraction that has visitors packing the elevators to the 10th floor: a free, open-air observation deck called the Viewing Level. 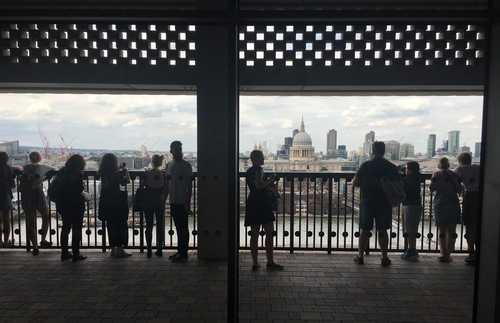 This is the first view visitors have after leaving the elevators. That's the legendary dome of St. Paul's Cathedral in the middle. 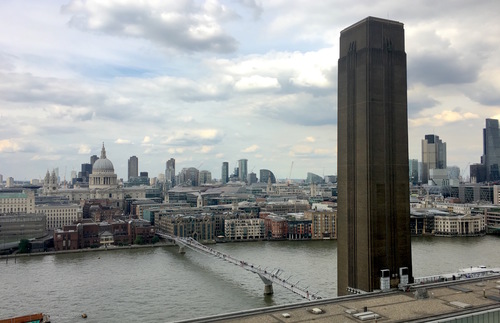 Once you leave the enclosed elevator lobby, you're on an open-air balcony that encircles the building, facing the back of the stylized chimney that served the old power station. You could get a similar view from the Golden Gallery at the top of the dome of St. Paul's, but that costs £8 and requires a 550-step slog up.

The views from the back, or southern, side of the Tate's Viewing Level are largely blocked by modern condos. Those are encased in glass that exposes everything within to your view. It's so tempting to watch people make their breakfasts that the Tate had to put up signs begging visitors to "please respect our neighbours' privacy".

The front and side views, though, are more about history and less about surveillance. 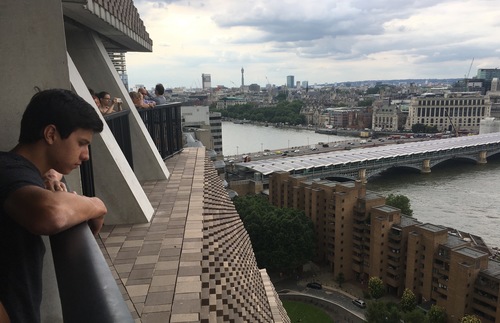 Looking west, you can see Blackfriars Bridge, the BT Tower, and the West End. A tiny snippet of the tower containing Big Ben is visible over the roof of a nearby building, but if the Houses of Parliament are what you really want to see, the view from the London Eye can't be bettered. Of course, the London Eye costs about £23 for adults with advance purchase, and you have to wait in line. And when it comes down to it, the Tate Modern is closer to the rest of central London and gives you a better idea of the city's ongoing growth spurt.

Looking east, there's the Shard, Europe's tallest skyscraper. Its own observation deck, View from the Shard, is so high in the clouds you can barely make out the people down below, and visiting that sets you back about £30 per adult. But the Tate's Viewing Level costs nothing. 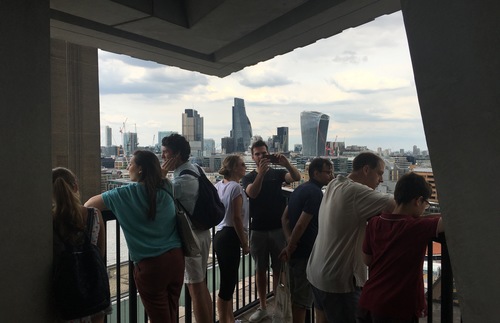 There's no safety glass, which makes taking excellent selfiies easy. The four corners of the Viewing Level are ideal for pictures. Snap a few—London's skyline is in constant flux and new skyscrapers seem to be pushing up each year. 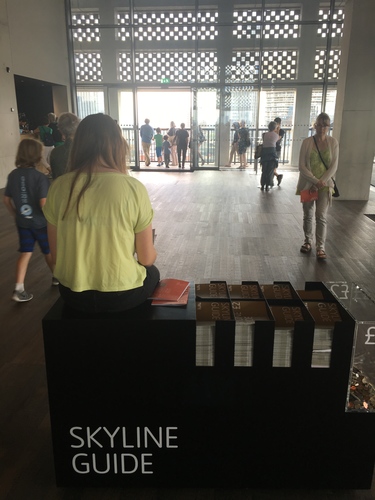 A visit isn't completely free—if you want a foldout guide to what you're seeing on the skyline, that's a requested donation of £2. And, just like at View from the Shard, there's nowhere to sit—which is why this tourist just sat on the guide rack instead. We have to assume that the Tate doesn't want you to hang out all day long. That's perhaps a touch inhospitable, but forgivable when you consider they just saved you up to £30 on getting some great panoramic shots of London.

After seeing this, there's only one thing to do: Go downstairs and get another eyeful of some of the world's most celebrated art.
Arts and Culture
Local Experiences