Thank you for subscribing!
Got it! Thank you!
Home›Trip Ideas›Arts and Culture›Maybe Beer Goggles Help? Boston's Museum Of Bad Art Reopens in a Craft Brewery 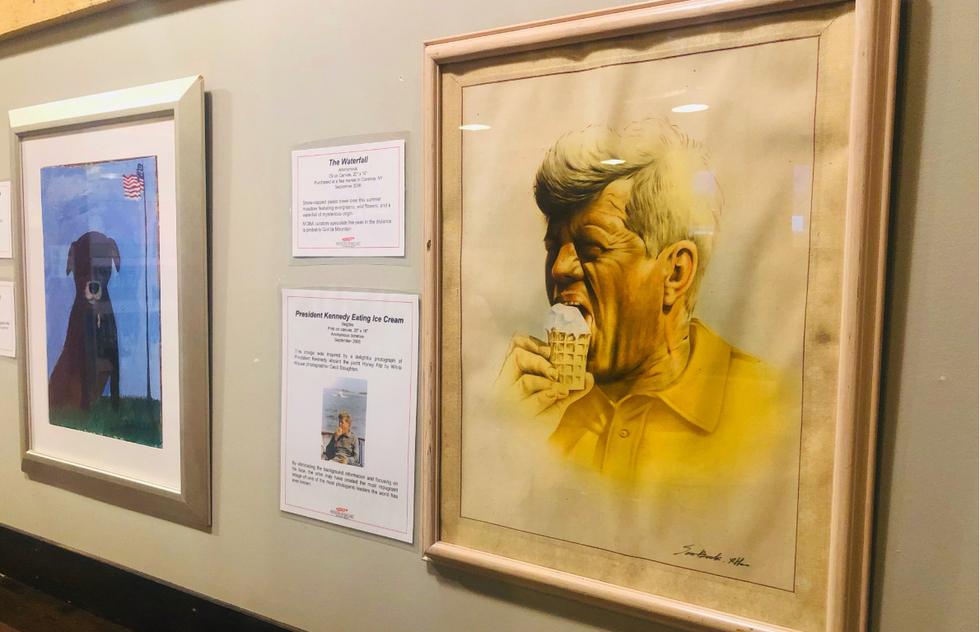 Bringing an artistic vision into reality can easily go sideways, as you’ve probably learned if you’ve ever taken a figure drawing class, attended a sip-and-paint party, or accidentally transformed Jesus into a monkey on the Spanish church fresco you were restoring.

We’ve all been there.

But only the very best of the worst aesthetic misfires qualify for inclusion in the Museum Of Bad Art, a Greater Boston mainstay that has found a new permanent location after three years without a home.

While sampling the brewery's lineup of craft beers on tap, you can appreciate works such as “Spewing Rubik’s Cubes,” in which a flame-haired jester vomits the 1980s brainteasing toys; “Very Bighorn Sheep,” depicting a family hiking through a mountainous Bob Ross landscape where the ruminants are roughly the same size as the Rockies; and, a personal favorite, “President Kennedy Eating Ice Cream" (pictured at the top of this post), a portrait that appears to capture the precise moment when JFK realized he was lactose intolerant.

There is no admission charge for viewing these wonders. 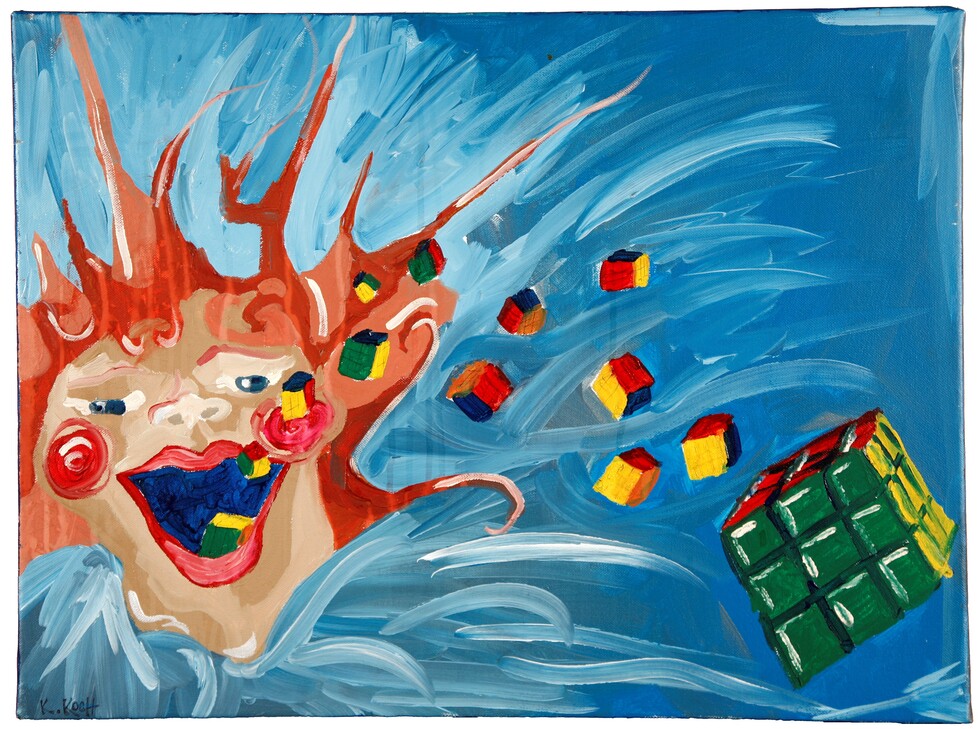 When asked about the selection process, MOBA’s “permanent interim acting executive director,” Louise Reilly Sacco, told Frommer’s, “One of our tests is would you say to someone, Wow, would you look at that?! Because that can mean it’s either really good or really bad.”

To fit the museum’s idea of so-bad-it’s-good, a piece has to be a “sincere and original” attempt to create art, Sacco explains. “Somebody’s trying to communicate something,” she says. “Then something has to have gone wrong in a way that makes it a compelling piece.” Perhaps the concept itself was bananas. Or the artist’s skills weren’t quite up to the task.

Merely being kitschy or dull isn’t enough. “There’s lots of art that’s just boring,” Sacco says. “We’re not interested in that. No velvet Elvises, no dogs playing cards.” And deliberately setting out to make something bad won’t do, either. “It doesn’t have the heart and soul,” according to Sacco.

There are of course satirical elements at play here. But the intended targets are not the works’ creators. “We are always celebrating the art and the artists,” Sacco says, “but we’re happy to make fun of museums, art critics, art writing in general, art historians. Any of that. But never the art or the artists.”

Curator Michael Frank strikes just the right balance in his pitch-perfect captions affixed to the wall next to each piece on display. Combining diligent research into the work’s provenance with dashes of art world jargon and deadpan description, Frank has the tone of museum wall text down pat.

Below an ill-conceived copy of a figure from the Sistine Chapel’s The Last Judgment, for example, the caption reads, “The artist sought to improve upon Michelangelo’s masterpiece by clothing [the Damned Man] in a bright green Speedo, and adding a disjointed eyeball over his left shoulder spewing what appears to be toxic slime.” 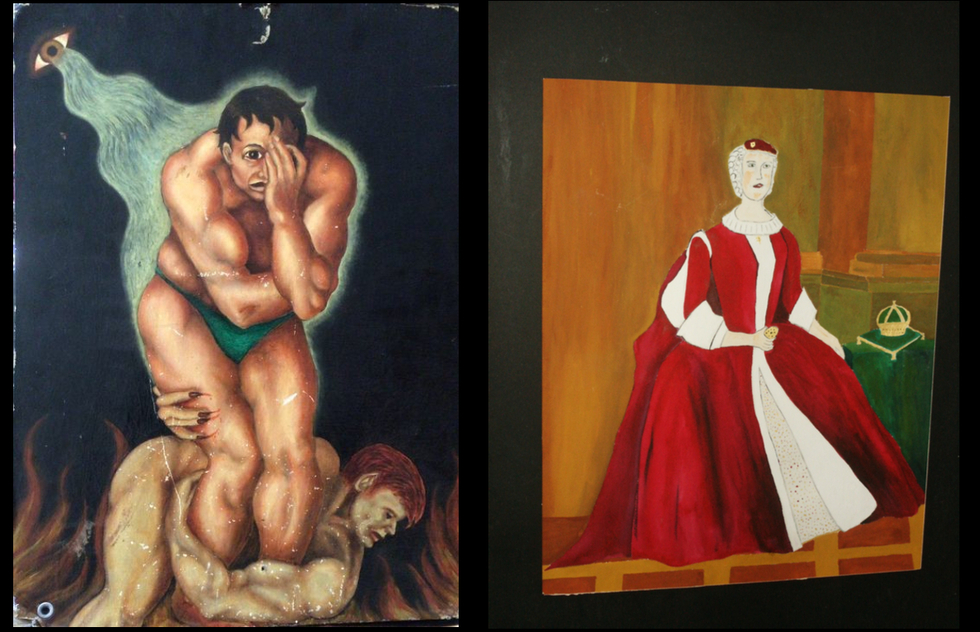 (L–R: "The Damned Guy" and "Queen of the Chocolate Chip" | Credit: Museum Of Bad Art)

Where does the art come from? “Yard sales, flea markets, people sending us things they found in the attic when they were cleaning out auntie’s house. That sort of thing,” says Sacco. Artists sometimes submit their own work, too. As Sacco puts it, “If we say no, they can tell themselves, Well, I’m not that bad. I got rejected by the Museum Of Bad Art.”

Now numbering more than 800 works, the museum’s collection got its start in the mid-1990s, when art and antiques dealer Scott Wilson rescued a painting from sidewalk trash because he liked the frame. But a friend, who also happened to be Sacco’s brother, saw something in the canvas, subsequently known as “Lucy in the Field with Flowers,” a depiction of a white-haired woman standing or sitting or possibly doing a jig amid wildflowers under a yellow sky.

“Lucy” inspired the acquisition of further works, eventually leading to a show in the basement of a West Roxbury home. The burgeoning bad art collection became so popular that permanent locations had to be found at the Dedham Community Theatre and, later, the Somerville Theatre.

Just before the pandemic, the owners of the latter venue decided they had other ideas for the space occupied by MOBA. But Sacco is pleased that the exhibit ended up at the Dorchester Brewing Company, where visitors can still see the collection for free in a space that has long hours and a staff to keep an eye on things. For visitors, lures include the housemade brews as well as food from onsite partner M&M BBQ. 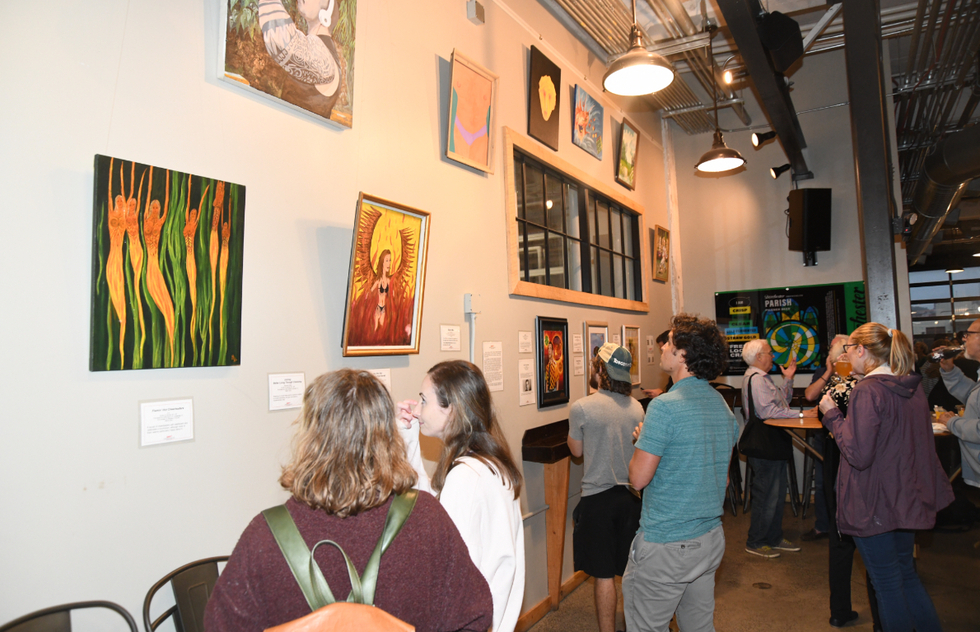 Bad art and good beer go well together, Sacco argues. “A brewery lends itself to people who are here to have some fun and relax,” she says. After all, the purpose of MOBA is “to have fun and enjoy art—and maybe think about art, even.”

You can swing by after visiting one of Dorchester’s primary tourist draws, the John F. Kennedy Presidential Library and Museum. To that facility’s abundant evidence suggesting the 35th president was photogenic, the Museum Of Bad Art dares to ask, Yeah, but did you ever see the man eat an ice cream cone?