Thank you for subscribing!
Got it! Thank you!
Home›Trip Ideas›Arts and Culture›Photo Slideshow: The Art Lover's Tour of Provence 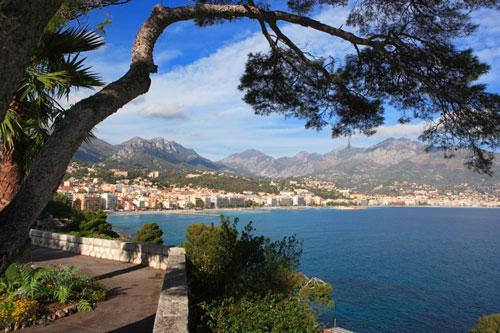 From Monet to Van Gogh to Matisse and up through Picasso, artists have gravitated toward Provence's vivid sunlight and vibrant landscape for centuries. Here's how you can follow their trail.

Long before the rise of Impressionism for which Provence is most famous, the medieval Schools of Avignon and Nice were influential as well. Sculptor Pierre Puget (1620-94) was deemed Provence's answer to Michelangelo, and Provence's varied scenery inspired Grassois painter Jean-Honoré Fragonard's (1732-1806) romantic rococo style.

Impressionists Claude Monet and Auguste Renoir eased the world into Modernism with their treatment of light, and Raoul Dufy, Pierre Bonnard, and Paul Signac carried the torch decades later. Both Paul Cézanne, a native Aixois, and Vincent van Gogh endlessly depicted sun-kissed Provençal landscapes. Pablo Picasso and Henri Matisse both settled here, and Jean Cocteau spent much of his life on the Côte d'Azur, creating his own museum in Menton, the start of our tour.

Parisian-born artist, dramatist, and surrealist filmmaker Jean Cocteau was a big fan of Menton and left the town two important legacies: his sublime murals in the Salle des Mariages, Mairie de Menton, Place Ardoîno (tel. 04-92-10-50-00), in Menton's City Hall, including the famous Noce Imaginaire; and the Musée Jean Cocteau, Bastion du Vieux Port (tel. 04-93-57-72-30; Wed-Mon 10am-noon, 2-6pm). The building Cocteau chose was a ruined 17th century fort on the port. He oversaw all the restoration work, designing the floor mosaics on the ground level, the window mosaics on the first floor, and the wrought-iron window decorations of his zoomorphes.

He donated his tapestries, set designs, and drawings as well, but then he died before his museum opened in 1967. The Musée des Beaux Arts is set in the sumptuous 17th-century Palais Carnolès (former residence of Monaco's princes), a work of art in its own right. Its eclectic collections include primitive Italian works (12th-15th c.), Flemish and Dutch paintings from the 17th and 18th century, and Greek icons.

From Menton, drive west onto the A8. Turn off at junction 55 and follow signs to Nice.

The fifth biggest city in France attracted several 19th- and 20th-century artists, including Henri Matisse, who loved Nice's "crystalline, limpid" light. He lived at several addresses from 1917 until his death in Cimiez in 1954. Before he died, he bequeathed the city a vast collection of paintings, sculptures, drawings, engravings, paper cutouts, and illustrated books. His iconic Nu Bleu IV (Blue Nude IV) and locally inspired Tempête à Nice (Nice in Storm) are here. Photographs show Matisse at work on the murals in the Chapelle du Rosaire in Vence.

Russian-born Marc Chagall lived in St-Paul-de-Vence, but his museum, the Musée National Message Biblique Marc Chagall, is in Nice. He bequeathed the town paintings as well as sculptures, a mosaic, and three huge stained-glass windows. Chagall ordered the glass set amid cold-toned flora such as olive, pine, and oak trees. Le Corbusier's disciple André Hermant designed the building. It's one of the world's most important Chagall collections.

Fauvist painter Raoul Dufy made revolutionary use of light and color in Nice, choosing the town as the background and inspiration for his works. A small but fine selection of paintings hangs on the walls of the Musée des Beaux Arts. One of the best contemporary art museums outside Paris is Nice's MAMAC (Musée d'Art Moderne et d'Art Contemporain), which presents French and American avant-garde art from the 1960s onward. The building is a tetrapod arch surrounded by four square, windowless towers, connected by glass footbridges, with panoramic terrace views.

Exit Nice on the A8 toward Cagnes. Exit at junction 48 and follow signs for Vence/Cagnessur-Mer. Join the D2 as soon as possible (Route de Serres) to St- Paul. Distance: 20km (12 miles).

This fortified medieval settlement -- presiding over the Vence countryside amid orange and olive trees -- is one of the most visited villages perchés in France. It was rediscovered by painters such as Amedeo Modigliani, Pierre Bonnard, Chaim Soutine, and Paul Signac in the 1920s. Since then, hundreds of artists have followed suit, along with serious art dealers whose boutiques and galleries flank the narrow, often teeming cobblestone streets. No art buff should miss the Fondation Maeght (tel. 04-93-32-81-63; www.maeght.com; daily 10am-7pm July-Sept; 10am-12:30pm, 2:30-6pm Oct-Jun).

On a pine hill north of town, it's in a pink and white structure that epitomizes Mediterranean avant-garde architecture, designed by José Luis Sert. Marguerite and Aimé Maeght were art dealers in Cannes who hobnobbed with Chagall, Matisse, and Joan Miró. The couple's private collections form the basis of the museum. An Alexander Calder stabile rises from the lawn like a futuristic monster. In the courtyard, marble statues by Miró and mosaics by Chagall form a surrealistic garden. A labyrinth displays yet more sculpture and ceramics by Miró, and a chapel has spectacular stained glass signed by Georges Braque and Raoul Ubac.

The foundation also exhibits works by a younger generation of artists. At the village entrance, the Auberge de la Colombe d'Or (tel. 04-93-32- 80-02; www.la-colombe-dor.com; doubles from €230; mains €15-40; AE, MC, V; closed Nov-mid-Dec) is a chic, historic restaurant serving gourmet fare alongside original paintings by former artist patrons, including Picasso and Matisse. It also doubles as a plush hotel with a Miró mobile statue overlooking the pool.

This resort town's historic core is charming enough, but don't miss the Chapelle du Rosaire (or Chapelle Matisse) on its outer edges, at 466 av Henri Matisse (tel. 04-93-58-03-26; admission €2.50; Mon, Wed, Sat 2-5:30pm, Tue, Thurs 10- 11:30am, 2-5:30pm; closed Nov). Matisse designed it as a gift to the Dominican nuns who cared for him during the last years of his life. He called the chapel his "masterpiece, despite all its imperfections." It is his complete and final work -- arguably the most exquisite piece of 20th century art on the Riviera. The interior is made from Carrara marble and other reflective white materials, dazzling when dappled with colorful reflections from the stained-glass windows.

Les Collettes' house and olive groves have been restored to look as they did when Renoir lived here. Although crippled by arthritis, he began experimenting with sculpture in Cagnes, and the museum has 20 portrait busts and portrait medallions that constitute the largest collection of Renoir sculpture in the world. You can explore the drawing room and dining room on your own before going up to the artist's bedroom. In his atelier are his wheelchair, easel, and brushes.

Famous for its bubble-flecked glass known as verre rustique, Biot has also been known for its pottery since ancient times, when local merchants began exporting local earthenware jars to Phoenicia. It's also where Fernand Léger painted until the day he died. A magnificent collection of his work is on display at the Musée Nationale Fernand-Léger, Chemin du Val-de-Pome (tel. 04-92- 91-50-30; www.musee-fernandleger.fr; admission €4 ; July-Sept Wed- Mon 10:30am-6pm; Oct-June Wed-Mon 10am-12:30pm and 2-5:30pm), a striking stone-and marble building enhanced by Léger's mosaic-and-ceramic mural facade.

The collection includes paintings, ceramics, tapestries, and sculptures showing the artist's development from 1905 until his death. His paintings abound with cranes, acrobats, scaffolding, railroad signals, buxom nudes, casings, and crankshafts.

This unpretentious port town with a bustling covered market is home to the Château Grimaldi, once the palace of the Grimaldi princes of Antibes, who ruled from 1385 to 1608. Nowadays, the castle shelters the world-class Musée Picasso, Place du Mariejol (tel. 04-92-90-54-20; June-Sept Tues- Sun 10am-6pm; Oct-May Tues-Sun 10am-12pm, 2-6pm). When Picasso came to town after the war, he stayed in a small hotel at Golfe-Juan until the museum director at Antibes invited him to work and live at the museum. He spent the year 1946 painting here, and, upon his departure, donated all the work he'd created: paintings, ceramics, drawings, lithographs, oils on paper, sculptures, and tapestries. In addition, a contemporary art gallery exhibits Léger, Miró, Max Ernst, and Calder.

Leave Antibes on the D6107 and follow signposts to Vallauris. Distance: 7km (4 miles).

The tacky ceramics capital of the Riviera still attracts lovers of pottery and Picasso with its three-in-one Musée National de Picasso, Musée Magnelli, and Musée de la Céramique, in the village castle, Place de la Libération (tel. 04-93-64-71-83; admission €3.25, free under 16; mid-June to mid-Sept Wed-Mon 10am-6pm; until 5pm mid-Sept to mid-June). Picasso lived in Vallauris from 1948 to 1955, and created some 4,000 ceramic pieces. He also decorated a rough stone chapel with two fabulous contrasting paintings: La Paix (Peace) and La Guerre (War). One floor houses a museum devoted to Abstract Art pioneer Alberto Magnelli; more Picasso ceramics, plus works by regional potters, are on another floor. In the main square, look out for Picasso's sculpture L'Homme au Mouton (Man with Sheep), which he created in just one afternoon.

Well-off or well-connected artists have long flocked to St-Tropez for a break in the sun. Post-Impressionist painter Paul Signac was one of them, and he inspired a host of others bent on capturing the Riviera's light. The Musée de l'Annonciade opened in 1955 within a 16th-century chapel on the old port, displaying many of Signac's works, along with other striking Post-Impressionist pieces.

Paul Cézanne and Aix-en-Provence are inseparable. Cézanne was a law student at his father's behest, but his real love was painting the countryside around Aix. Gradually he found recognition and friends among the circle of Impressionist painters in Paris. After outgrowing Impressionism, he begun to juxtapose large patches of color in new ways and to exaggerate lines and relief. His most prolific works were inspired by Aix's outlying landscape, particularly the Montagne St-Victoire, visible from town. Today, visitors can see Cézanne's atelier as he left it when he died. Contemporary art followers shouldn't miss the stellar collection at the Fondation Vasarely.

In 1888, Vincent van Gogh attempted to overcome his gloomy temperament by settling in sunny Arles. Never one for good luck, he arrived to find the sunshine city covered with snow. Nevertheless, he went on to paint 200 canvases in fewer than 15 months here. But it was in Arles that he notoriously lopped off his ear, after a fight with fellow artist Paul Gauguin. The Espace Van Gogh, the Café Van Gogh (the inspiration for Café de Nuit, and pictured above), and the Fondation Van Gogh all pay tribute to the tortured genius, who would die penniless, without recognition, two years later in Provence.

Talk with fellow Frommer's travelers in our France Forum today.