Thank you for subscribing!
Got it! Thank you!
Home›Trip Ideas›Arts and Culture›We Attended a Sitcom Taping in Hollywood: Here's What to Expect and How to Get Tickets 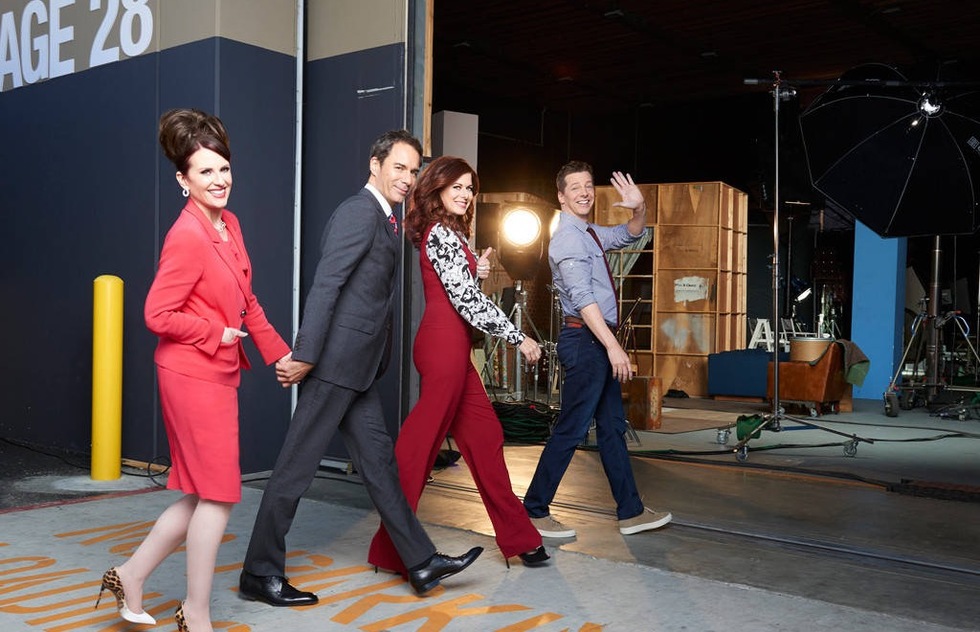 We Attended a Sitcom Taping in Hollywood: Here's What to Expect and How to Get Tickets

We attended a TV sitcom taping—and we actually had fun! Here's what the experience is like, and here's how to get tickets for your next vacation.

Everyone, at least once or twice in their lives, should attend a TV taping. There's nothing quite like seeing how the entertainment sausage is made: the cameras, the celebrities, the crew running the studio like clockwork, the astonishing speed at which average people will behave like a howler monkey just for a free tee-shirt.

When you spend a few hours on a vacation going to see a live television show, it's something you'll remember for years.
But what's it like, and how can you arrange it?
I recently attended a taping of the revival of NBC's Will & Grace in Los Angeles with 1iota, one of the three big ticket organizations that acts as the official distributor for some of television's biggest shows. And I came up with a few rules to follow if you want to attend a show yourself.
Rule One: Plan ahead. Some series book a month or two ahead, and some shows pop up a few days before. A show may have space for only 50 to 200 people, and lots of seats might be given away to VIPs before you get your chance. Each show—most of them are in Los Angeles or New York City, but a few are in Nashville, New Jersey, and elsewhere—contracts with an audience service, and that service controls access to that show. This particular show is handled by 1iota Productions (www.1iota.com), which is big on talk shows and sitcoms, but there are other companies that perform similar services and have exclusive contracts with other productions—you can find those listed on our TV Tapings page in our Los Angeles destination information.


You never have to pay. Anyone who tries to charge you for a ticket isn't the real deal. Generally, you visit the service's website, choose the show and date you want, and you get on a wait list. You don't get a ticket right away, like you might for a concert. Once it becomes clear how many seats will be available—usually, within the week—you'll be contacted. For 1iota, then you can either print your confirmed ticket or load it onto your phone to show.
Rule Two: Arrive early. These services habitually overbook shows, and studio execs habitually snap up seats at the last minutes for their friends, which screws with availability. (For my taping, pop star Adam Lambert was seated in reserved seats in front of me.) Sometimes, even confirmed guests won't be guaranteed seating, but if you get there long before your call time, you increase your chances.
Rule Three: Don't expect to be treated like royalty. Although our audience handlers were unfailingly polite and cheerful and concerned for our comfort, the production that hires them saw us as a commodity. We were there as a tool, to extract and record reactions from us on cue. That starts with a lack of pre-show lounges. When I arrived on the Universal Studios lot for Will & Grace, I was deposited at a makeshift pen under the direct sun in a parking lot. (This is common: The Price is Right uses a covered patio, Big Brother lines guests up beside a parking structure, and Dancing with the Stars makes you wait beside a road without so much as a chair.) Not so glamorous, although the Universal Studios tram tour would pass us every so often at the tourists would squint at us to see if we were famous.

From there, we were checked in, passed through metal detectors, and loaded on a shuttle bus that took us deeper into the lot to the correct sound stage, where ticket arranger 1iota had set up a photo spot for souvenirs—a great courtesy since smartphones are banned outright on stage. We were put in our seats more than an hour before the show began.
You probably won't get to meet the cast—they're concentrating on memorizing lines and performing, and there's dozens of crew members between you and them. You also might end up giving the production six or seven hours of your life, from check-in to dismissal, but not receive so much as a key chain or a tee-shirt for your participation. The working assumption is that just being in the room is your reward, and usually, it is. 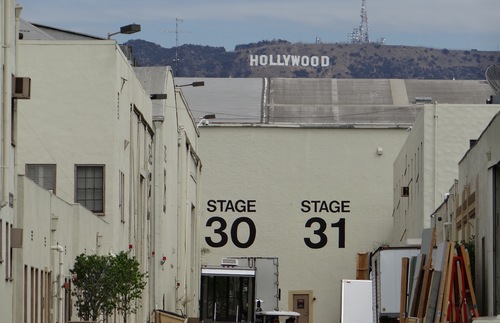 Paramount Studios. Credit: TipsForTravellers/Flickr
Some productions may award a few small giveaways, but most of the time, they're given to the few audience members most willing to holler and whoop the loudest—outgoing types do the best. There's always an "audience coordinator" to fill every open moment with corny jokes, Q&As, and non-stop attempts to keep your blood flowing—ours had done the same job at Designing Women and The Golden Girls, the trivia from which thrilled some in attendance. At Will & Grace, midway through the taping, we were handed candy, water, and slightly soggy white-bread sandwiches. They were much appreciated, but we didn't get them because we were great people—the goal was to keep our laughing energy up.
Sound stages are minimalist things. Most of them weren't even built with dressing rooms for actors, so forget having convenient bathrooms. At our taping, the 1iota ushers had to ferry us to a mobile restroom trailer set up by the Universal backlot. So if you have trouble holding it for long, a sitcom taping may not be for you.
Rule Four: Don't expect a theatrical-style presentation. Most sitcoms are performed in sound stages that are equipped with temporary risers and convention-style chairs that can be removed when the season is over and the next production moves into the space. Sometimes, your view of the scene might be momentarily obstructed by a camera or a flimsy wall, and over the night you'll be looking all around the stage because sets may be spread in spaces all around you. But most of the scenes will be visible from about 30 feet away, and the audience always has the ability to watch and hear the proceedings via overhead monitors, too.
No, the appeal of a taping lies in seeing actors you like and being fascinated by the process. And this is where a TV taping becomes incredibly rewarding. At my recent taping, I got to see the legendary director James Burrows, a master of comic timing and full-bodied characters whose leadership made Cheers, Frasier, and Friends such standouts of the genre.
Rule Five: Be prepared to give lots of time. In between every take, Burrows would confer with the writers and actors while music was turned up and the audience coordinator tried to distract the observers and keep them jazzed. Then the ensemble would get back together to try it again, this time with a few new lines. Every scene was delivered three or four times this way, each version testing new punch lines that the writers thought would be increasingly funny. And it meant that our laughter never felt forced—it was funny, for every take.

Burrows runs the show in order so that audiences can follow along, but some shows tape scenes out of order depending on which set is most convenient. This slow, try-it-once-more procedure is why a standard sitcom taping can take about four hours (to this day, the '90s sitcom Friends remains infamous in Hollywood for taking six or seven laborious hours to bang out), but it's also why, given a talented cast and writing staff, the process is rarely boring.
For our taping, it was illuminating to watch Sean Hayes or Megan Mullally be told a new line out of our earshot, see the cast giggle when they heard it, and then watch them nail it with flawless timing one minute later for the cameras, without ever having had a second to rehearse. It takes talent to work this way, even without the chaos factor. There are plenty of lame sitcoms with less talented players, though, that would make a long taping feel like a circle of Hell, so choose your show by its talent.
Talk shows and game shows tend to be what's called "live to tape," meaning there are almost no re-takes and the show takes about long as it does to watch it on TV. For these, you'll be out on the street and back into your real life within 10 minutes of the show's end. So if you only have two or three hours to devote to a show, make it a talk show.
Talk shows also race along like locomotives, churning through time like hour-long machines, so quick that when they're finished you'll feel like you only had a celebrity-populated dream. But slow-paced and methodical sitcom tapings, for students of writing and craft, are where learning is at. The stakes are higher, as performers actively lay down footage that will define them for years to come on streaming services, and the craft is more consequential.
We have some more tips on what to expect at TV tapings, including what to wear and how to get selected as a game show contestant, on our dedicated page in our Los Angeles section.
Arts and Culture
Local Experiences
News
Other Discounts