Thank you for subscribing!
Got it! Thank you!
Home›Trip Ideas›Local Experiences›50+ Places to Find Free, Travel-Themed Virtual Backgrounds for Video Calls

The world's big destinations and attractions have posted digital wallpapers for Zoom, Microsoft Teams, and other video chat platforms—and you can download them all for free.

One of the delights of this bizarre age we're living through—and yes, there have been delights, including a worldwide proliferation of home-baked cakes and cookies—has been the explosion in video conferencing.

Whether you use Zoom, Microsoft Teams, or some other chatty app, 2020 has given us entree to the private spaces of friends and the famous alike. Don't pretend you haven't been fascinated to see what celebrities keep on their shelves near their home computers. Don't pretend you had assumed some of them lived better than they actually do. We're all transfixed. We are all Peeping Toms now.

Literally: The crisis has even permitted us to peep at Tom Hanks in his tastefully appointed kitchen as he virtually hosted Saturday Night Live.

The delight of sanctioned nosiness is improved only, perhaps, by the delight of kooky self-expression through fake digital backgrounds that you can upload to make it look like you're somewhere you're not.

We may never be able to explain to Grandpa what to click on Zoom so that everyone's picture is stacked like the opening of The Brady Bunch (it's Gallery View, Gramps), but we can at least baffle him by uploading wild and strange virtual backgrounds to appear behind us in our video calls.

Don't think the world's tourist attractions haven't seen a free marketing opportunity in our newfound hunger for custom backgrounds. Numerous destinations have created their own images that you merely have to download and then upload to your preferred video conferencing platform, no charge at all.

Now you can celebrate the world's wonders and conceal the growing pile of dirty laundry behind you, all at the same time.

These aren't photos that random people stole and posted as their own—they're 100% legit and provided to you with no strings attached by official offices. So you're good to go! Well, virtually.

Atlanta: Images include Piedmont Park, Centennial Olympic Park, and Swan House. The Georgia Aquarium posted more of its own photos.

Australia: Images include Uluru, the Gold Coast, Melbourne, Cradle Mountain, and a sandbar on the Great Barrier Reef near Cairns. Tasmania has its own collection here.

Detroit: Images include the Fisher Theatre, Belle Isle, and the Motown Museum.

Idaho: Images include Blue Heart Springs, Shoshone Falls, and Craters of the Moon.

Las Vegas: Images include the Venetian, the Bellagio fountains, Fremont Street, the top of Hoover Dam, and the Seven Magic Mountains boulder sculpture.

Los Angeles: Images include Griffith Park Observatory, Union Station, and Hermosa Beach Pier. Even as it tears down buildings for redevelopment, the Los Angeles County Museum of Art (LACMA) posted some of its best works, and the Hollywood Heritage Museum has some cool shots of classic Hollywood such as Paramount Pictures' Bronson Gate, the Capitol Records building, and vintage shots of Hollywood Boulevard.

New York: Images include Chittenango Falls, Boldt Castle, the Finger Lakes, and the Brooklyn Bridge. The New York Public Library and Niagara Falls posted their own collections as well, and the Metropolitan Museum of Art got in on the gag by posting shots of some of the most lavish rooms in its interior design and architecture collections.

North Carolina: Images include the Charlotte skyline, Ocracoke Lighthouse, and the Appalachian Trail.

Philadelphia: Images include Al Capone's prison cell, Elfreth's Alley, LOVE Park, the Rocky statue, and the Liberty Bell. The Museum of the American Revolution has its own suite of lively free backgrounds for download.

Salem, Massachusetts: Images include the Salem Witch Museum, the Schooner Fame, and the House of the Seven Gables.

San Francisco: Images include the Painted Ladies houses, the California Street cable car, the Castro, and the Pier 39 sea lions.

Sevierville, Tennessee: Images include the Dolly Parton statue and the Great Smoky Mountains in many moods. Nearby Pigeon Forge has rustic shots of Dollywood.

SeaWorld Orlando: Images include a sea lion pup, a beluga whale, and penguins.

Tampa Bay, Florida: Images include an Ybor City rooster, the Florida Aquarium, and paddleboarding by the downtown skyline. Busch Gardens Tampa Bay has its own selections, including the SheiKra and Tigris roller coasters and animals such as giraffes (pictured above), sloths, and tortoises.

United Airlines: Images include cockpit views, lounges, and airplanes in flight (so at least someone's flying).

Vancouver: Images include skyline views, tulips, and the marina.

Home rental companies have also gotten in on the trend to promote their most eye-popping properties. Images from Airbnb include luxurious sites in Provence-Alpes-Côte d'Azur, France; Arrowtown, New Zealand; and over the Sacred Valley of Urubamba, Peru. Images from Onefinestay include a loft on Place des Vosges in Paris, a pool by a mansion in Sydney, and a rooftop in the old city of Rome.

And just in case you need to know, here's how to add virtual backgrounds to one of the most popular video chat apps, Zoom:

1. Save the photo you want to your computer or device.

3. If your computer or device can support the function, “Virtual Background” appears as an option. Select it, then press the plus sign to upload the photo of your choice. You can also use video.

We don't think we can truly compete with the virtual wallpaper bonanza above, but we can provide a few of our own backgrounds with a distinct Frommer's spin.

Slap these shots of our book titles behind you the next time you're logged into virtual chat. People will think your place is stuffed with bookshelves, like you're some kind of library smarty-pants. They'll never see the stacks of dirty dishes behind you now! 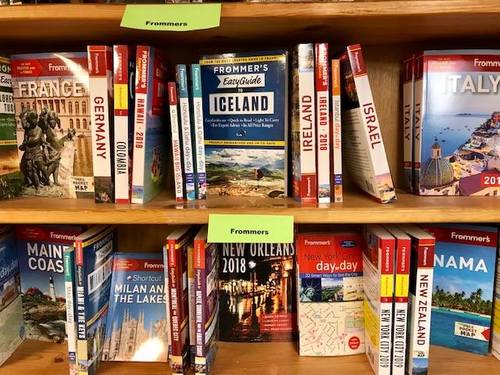 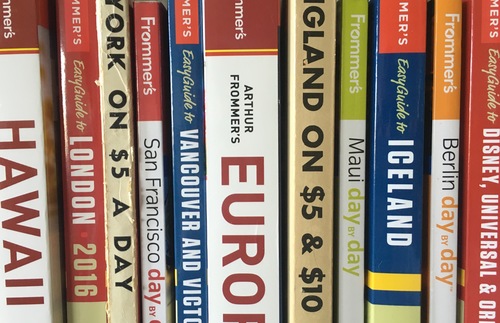 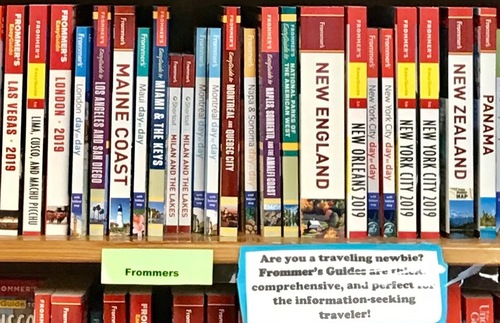 Finally, if you're a fan of our weekly podcasts (always available for free at Frommers.com/podcast), then the title card for our radio show might be more on your wavelength: 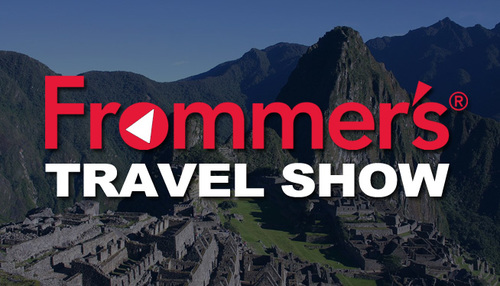