Thank you for subscribing!
Got it! Thank you!
Home›Trip Ideas›Local Experiences›Europe's Tourism Must Reckon with Slavery. Liverpool Has Made a Start. 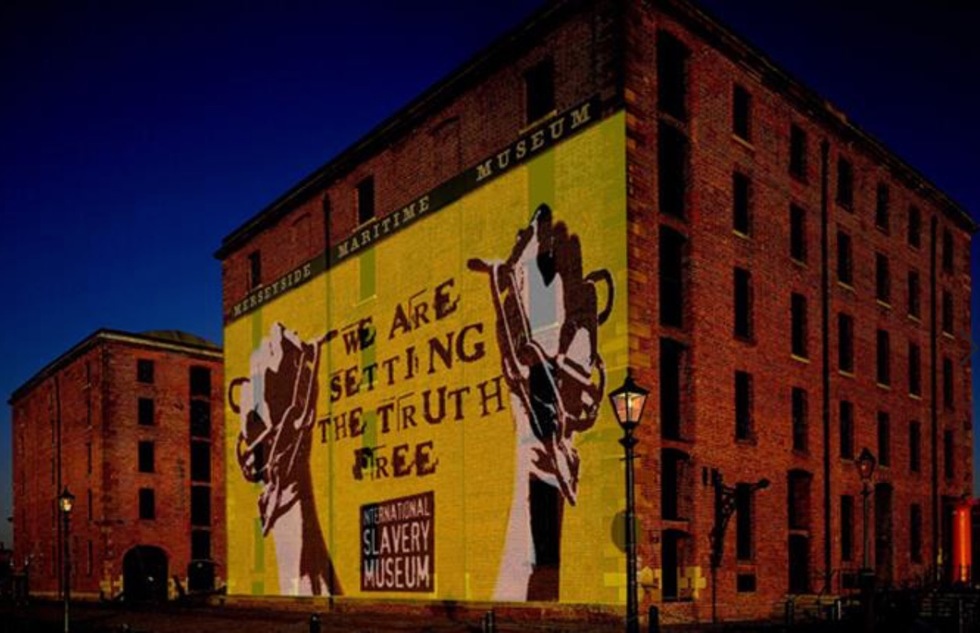 Europe's Tourism Must Reckon with Slavery. Liverpool Has Made a Start.

Europe made vast sums from slavery, yet tourist attractions rarely come to terms with that chapter. Liverpool, England, is at the forefront of a renaissance in historical social consciousness.

It was called the Triangle Trade.

It had three parts. First, cargo ships would leave Europe, headed for Africa. Once there, the ships loaded their holds with kidnapped people.

Then the second part—the infamous Middle Passage—would begin. The captured human beings were hauled in chains across the Atlantic, to the Caribbean and to the colonies that would become the United States, and sold as slaves.

America was built by slavery, but Europe was bankrolled by it.

The widespread antiracist uprisings following the death of George Floyd have not only accelerated introspection and calls for justice in the United States. In Europe, too, people are watching the U.S. and coming to grips with the roles their own ancestors played in setting America on its dark path to begin with.

On June 11, when a jubilant crowd in Bristol, England, dumped a statue of 17th-century slavery profiteer Edward Colston into the drink, the emotional explosion didn't come out of nowhere. Over the past few years, Europeans have gradually opened their eyes to uneasy truths about how slavery—and colonialism in general—helped produce Europe's wealth.

More than 400 European ports were involved in the colonial slave trade, staining the history of a surprisingly long list of nations, including Britain, France, Portugal, Spain, the Netherlands, Denmark, and Sweden. But the continuum of American slavery doesn't receive much space on the tourist docket on the east side of the Atlantic.

Here and there, you'll find a corner of a museum that dips into the subject—the National Museum of Denmark has a small display, and a little Slave Market museum in the Portuguese town of Lagos opened in 2016—but there's not much you could call prominent.

Awareness has been stirring—but lagging—for years. In 2016, France's then-president, François Hollande, called for the establishment of a museum and memorial about slavery. French slavers transported around 1.4 million people to French colonies. The plans to acknowledge this national sin were stalled, however, until 2020's Black Lives Matter uprisings made headlines around the world. Now, the country is fast-tracking a monument to be erected in the Tuileries Garden near the Louvre in Paris.

It's no exaggeration to say that the output of slavery in the American South was a principal driver of the Industrial Revolution in Britain. Some 3,100 slave trade ships sailed from the Thames in London. But at almost no moment in a tourist's visit to that city are travelers reminded that most of what they see was either paid for by slavery or seized as the spoils of empire through practices that were often just as depraved.

The very buildings housing Europe's most opulent attractions may have been supported by the Triangle Trade, but visitors receive no word of those origins—not while touring the country homes and estates maintained by the slave trade, nor while browsing the collections of the Natural History Museum that were retrieved via slave ships, nor in the homes of the Royal Family (whose progenitors incorporated slaving companies), nor in the House of Lords at Parliament (where plenty of men still enjoy the power and fortunes bequeathed to them by slavery merchants).

Too often in London's museums, when slavery is mentioned at all, it's usually in passing relation to the white politicians who outlawed it, mostly through massive payoffs to compensate slaveholders. In England's top-tier institutions, such as the National Portrait Gallery, the odious topic is dispatched with a few starchy portraits of abolitionists, particularly of 19th-century politician William Wilberforce—and thus, the subject of slavery is usually Wilberforced into amnesia by scanty context.

And while the practice of slavery is observed from a distance with a cluck of the tongue, the truth that national treasures were financed by slavery is rarely mentioned.

In London, a plan to erect a memorial in Hyde Park has been limping along since 2002. The project received official approval in 2016 but momentum stalled after that, although London's mayor, Sadiq Khan, has recently pledged to build a national museum and/or memorial to Britain's role in the slave trade.

Amid all the big promises and dewy-eyed proposals from politicians, one European city is ahead of the rest.

There is no national slavery museum in the United States. Yet Liverpool's has been operating since 2007.

The modern International Slavery Museum is centrally located at Albert Dock, the city's top destination for art and culture. In bygone centuries, the Dock was where some 5,300 ships set out for Africa to load up on human cargo. In 1800, Liverpool controlled 80% of the British slave trade and more than 40% of Europe's slave trade—some 1.5 million human beings were transported across the Atlantic Ocean in bondage on Liverpool ships. Today, the slavery museum shares the complex with heavy-hitting attractions such as the Tate Museum and the Museum of Liverpool.

The slavery museum is an exhaustive—and exhausting, given the topic—explanation of how slavery worked, who suffered and who gained from it, the ways people tried to resist, and how the practice eventually unraveled. The facility doesn't just shed light on colonial slavery, either. It takes pains to restore a sense of identity to many of the people who had theirs stolen, and reminds us that even today, tens of millions of people live under the oppression of some kind of indentured servitude.

Packed with artifacts such as log books, folk art, and leg irons, the museum is the only place in Europe I've ever been to that comes close to issuing a confession for playing a role in facilitating this misery.

That's because it's the only place outside of the United States I have ever seen a Ku Klux Klan robe on display. The costume, which came from Port Jervis, New York, stands under glass, ghoulish and blank-eyed, as if to say, This is what we unleashed across the ocean in the United States. We fed your racism, America. And we are sorry. 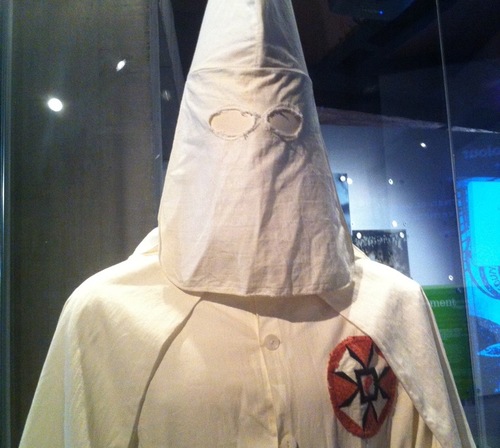 The museum's sobering collection and its location alongside the city's most respected cultural institutions have been important catalysts in helping Scousers (the nickname for Liverpool residents) connect the past to the present. It opened the minds of Liverpool's citizens to historical reckoning—one in which even sites tied to the Beatles, the city's favorite rock 'n' roll sons, won't be excused.

The Beatles may still be considered demigods in their hometown, yet residents are nonetheless considering renaming Penny Lane now that the possibility has been raised that one of the most popular addresses in the Fab Four catalog might have been named for someone with links to slavery.

A few years ago, such a turn of events would have been as unthinkable as New Yorkers considering renaming Broadway, but that's how deeply the lessons of Liverpool's International Slavery Museum have sunk in.

That said, Liverpool still has a long way to go. It was Europe's top slave-trade city, after all, and much of its 17th-century wealth came from the practice. Slavery helped fix Liverpool to the map as an international city—literally. The government even keeps track of which streets were named for people with slaving connections.

Locals are now debating whether retaining the names might be the better way to acknowledge an ugly history, but it seems that just having the International Slavery Museum around has primed Liverpool for this moment. It's already having a more nuanced conversation about the past than most American towns have been able to muster.

Back in the British capital, there are signs that institutions are ready to follow Liverpool's lead. Museum of London Docklands, which tells the story of London's bountiful sea trade, occupies an 1802 wharf warehouse that was built in East London for processing goods purchased through slavery.

For many years, the museum focused on the lives of Thames dockworkers only, but that was rectified with a well-detailed permanent exhibition that includes an emotionally grueling multimedia presentation about the suffering caused by the national accumulation of wealth.

Even after that exhibit was installed, a statue of Robert Milligan remained at the museum entrance. Milligan, a plantation magnate and slave owner, established the docks around the museum but isn't a particularly well-known figure in Britain today. His statue went up in 1813, when the country was still raking in profits from bondage in the British Empire.

The monument was rededicated in 1997, but thanks in part to Liverpool's lead, the statue made modern people increasingly uneasy. When the Docklands' slavery exhibition was installed in the building behind him, Milligan's triumphant figure was shrouded in black—but only temporarily.

On June 9, the Milligan statue was finally hoisted away. "Tonight, we have removed the statue of slave trader Robert Milligan that previously stood at West India Quay," the local government tweeted. "We have also announced a review into monuments and other sites in our borough to understand how we should represent the more troubling periods in our history."

As statues of half-forgotten, abusive colonialists come down, what's to replace them?

In Liverpool, the answer is being determined by the people. Last week, when TV host and historian Laurence Westgaph launched a campaign to create a memorial to slavery's victims, £17,000 was raised in just two days—when only £10,000 was requested.

If Europe is truly committed to presenting this shameful but fundamental part of its past to visitors, the continent would do well to follow the example set by Liverpool, where average citizens—people who love a city that was shaped by slavery long ago—are helping to tell the whole story of how they came to be who they are. 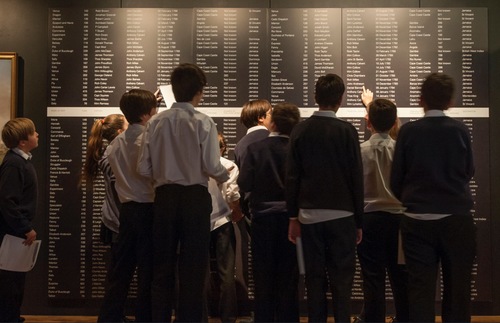 Schoolchildren read the names of slave trade ships that sailed from the port of London. (Credit: Museum of London Docklands)
Arts and Culture
Local Experiences
News