Thank you for subscribing!
Got it! Thank you!
Home›Trip Ideas›Local Experiences›Greeter Tours Are a Wonderful—and Free—Way to Explore Cities Around the Globe 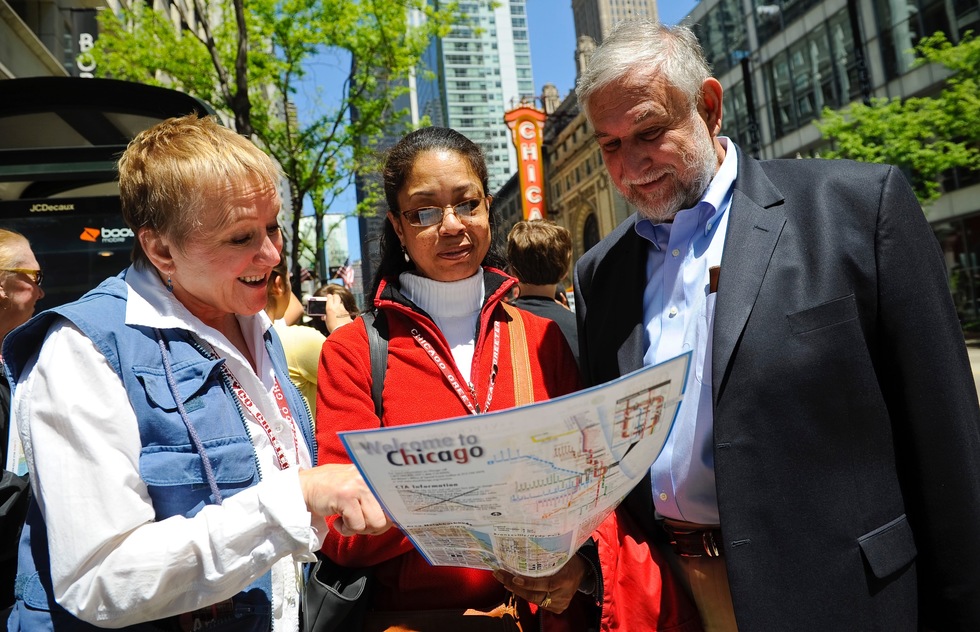 It was a startling sight: Abraham Lincoln, about 40 feet tall, cordially discussing a piece of paper with a contemporary fellow, nearly as tall, in a cable knit sweater, outside the building that houses the Chicago Tribune.

“Who is he talking to? And why?” I asked Bill, my eloquent Chicago Greeter guide, as we stared up at the giant sculptures.

It was the first time I’d stumped Bill all morning. For the last two hours, he’d been taking me on an erudite, compelling tour of the Loop (the downtown district) of Chicago, past important works of public art, through labyrinthine underground tunnels of governmental agencies, and into office building lobbies that just happened to have dazzling mosaics by Louis Comfort Tiffany. Along the way, I’d been regaled with stories about the Great Chicago Fire and early battles between explorers and Native Americans, and learned why certain areas of the city were dangerous, while others could be wandered through with few worries.
advertisement

And the tour was absolutely free.

Just as it would have been in Tokyo, Tel Aviv, Marseilles, Manila, Moscow, Zurich, Shanghai, Calgary, Calcutta, Buenos Aires, and scores of other cities around the globe. The Chicago Greeters are part of a growing network of organizations dedicated to promoting cultural understanding. If you go to the Global Greeter Network, a hub for this movement, you’ll find that there are greeter programs currently in 132 destinations—even in places as far flung as the West African nation of Togo, which has four participating cities.
advertisement

What they all have in common is their price—free—and their ground rules: Tours never accommodate more than six people and are always led by volunteers.

Interestingly, these volunteers will try and shape the tour to the visitor’s special interests when they can. When I went to Jamaica, for instance, and participated in the island's “People to People” program (different name, same concept), I was invited into a local’s home, where I, an avid home cook, learned to make the national dishes of that country.
advertisement

In my hometown of New York City, I took a tour of an area of the Bronx that I didn’t know with a Big Apple Greeter who had me ducking in and out of bodegas, churches, shops dedicated to Catholic icons, and community centers. I felt like I’d discovered a new nation just a few subway stops from where I lived. And Bill from Chicago had recently created, at the request of a 20-something Chinese traveler, a tour that went to Chicago film locations used in the last decade.

I’m not sure if Bill felt the need to give more info to that tourist after the afternoon’s outing but he did with me. A day after we had our delightful walk, he emailed me an article about the statues. They were meant to show Abraham Lincoln explaining the Gettysburg Address to a an average Joe (who holds the speech in his hand) and its meaning for today’s society.
advertisement