Thank you for subscribing!
Got it! Thank you!
Home›Trip Ideas›Local Experiences›Huell Howser is the Ultimate Armchair Tour Guide to California 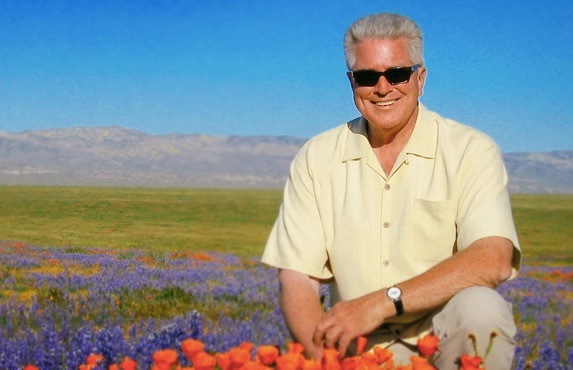 Huell Howser is the Ultimate Armchair Tour Guide to California

Whether you're looking for things to do on a California vacation or just need a smile, Huell Howser's online archive opens a new state of mind to explore.

One of the most beloved Californians of the past 50 years actually came from Tennessee.
If you have never heard of Huell Howser, then you're obviously not from California, either. He's only one of the most prolific video tour guides of all time.
Everyone in California knows Huell. For decades, their TVs have been aglow with his cheerful travelogue programs, including California’s Gold and Visiting. Each episode—and there are hundreds—takes the viewer on a tour of another tourist site, historical treasure, or cultural oddity in the Golden State.
And everyone in California can do their own Huell impression—just ask a resident you know. His aw-shucks Southern drawl is unforgettable. Think Gomer Pyle after breeding school: Start with a bright, effusive drawl, but only say things that are positive, inquisitive, and above all, full of wonder. Talk to everyone, ask their names, take their hands or their elbows.
"This is amazing! Mr. Tree, do you talk?"
"Look at all this saurkraut comin' in here!"
"This is excitin'!"
A good Huell impression may be grating but it's marked by enthusiasm, as exuberant as Tigger, but it's not without melancholy. Through all his work, there's a thread of sadness about what's being lost to progress and cynicism, as if he's working against the clock to record it all before it's gone.
And then there are his personal mysteries: A man who couldn't walk down the street without hearing his own name cheered was himself fiercely private. He told few people he was ill. When he died in 2013 at age 67, it shocked the state. This man, who didn't even move to California until his late 30s, is now considered one of the state's favorite sons. "There will never be another Huell Howser," you'll hear now.
But his show lives on. Area PBS stations still air it weekly. Best of all for travelers, Chapman University, in the former citrus center of Orange (near Disneyland), was bequeathed much of his archive, and it has digitized most of his programs (blogs.chapman.edu/huell-howser-archives/). More than a hundred additional episodes are uploaded to KCET's YouTube page.
Sifting through Howser's back catalog is like building a dream itinerary of cool discoveries for a California vacation itinerary. There's Huell on F.D.R.'s yacht in Oakland, at the Bunny Museum in Pasadena, atop the Golden Gate Bridge, on a hidden beach littered with sea-polished glass, at a movie-industry grill open since 1919, treating elderly movie actresses to lunch, or taking us on a behind-the scenes walk beneath the Hollywood Sign. In one episode, he uncovers the remnants of the Egyptian set for Cecil B. DeMille's The Ten Commandments left to sink into the desert in 1922; in another, he's marveling over the "Shuffleboard Capital of the World."
His archive is a treasure trove for people who are planning a vacation in the American West. Chapman even posts a map of the state that marks everywhere he went and made an episode. (Click here for the map.) 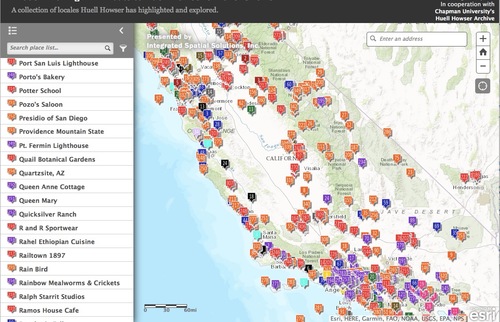 advertisement
Huell's shows make an urban jungle like Los Angeles seem as quaint as Mayberry, exploring historic restaurants you'd want to try and buying locally made foods you may have otherwise missed.
Human-interest shows like Huell's used to be standard fare in local TV markets, but many of them faded out in the 1980s. In California, though, the sheer force of Huell's infectious personality managed to keep the genre alive well into this century.
He was the only journalist permitted to go into the inner sanctum of the popular In-N-Out hamburger empire and interview the reclusive billionaire heiress who owns it. Huell was even immortalized by The Simpsons in 2009. He did his own voice—how could anyone else do it justice? 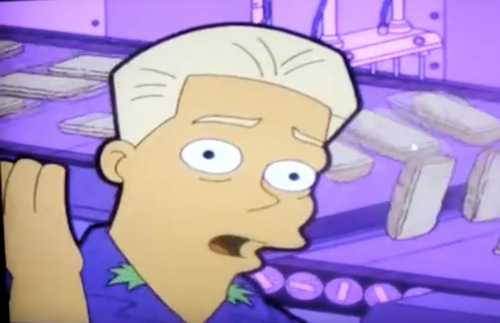 advertisement
Huell Howser on The Simpsons
He didn't fuss with sophisticated gimmicks like editing, scripts, or music. He usually just commanded his long-suffering cameraman Luis (who later wrote a memoir) to pay attention and off he went, muscling into whatever situation piqued his interest and eliciting responses simply by bubbling over. His inner timer clocked where he was in the tale, and if someone took too long to explain something, Howser cut them off while still seeming like a sweetie. In his mind, every episode unfolded like a discovery, and when his interview subjects said something that built onto the thrill, he'd repeat it loudly. California, even the dullest craft fairs and strip mall restaurants, was a wonderland of surprises.
Although all episodes have their gosh-and-golly charm, they're not all gripping winners—nobody will want to relive the plodding visit to the lutefisk festival or the half hour Howser spent in abject astonishment as a giant goldfish was moved from a tank to a pond. His starstruck subjects can be a hoot, however, as they line up to pay tribute on camera, and you could make a drinking game out of how often they reply "absolutely" whenever the host buoyantly states the obvious.
But no matter how amateur the enthusiasm, a Huell Howser episode cannot fail to cheer you up, even if you're not heading to California anytime soon. The childlike exuberance is infectious.
Huell Howser had a traveler's spirit. Like the best of us when we're on the road, he fell in love with every place he went.

"Last night was tostada night, so... we did that."
advertisement

"How do ya make a burger smile?"