Thank you for subscribing!
Got it! Thank you!
Home›Trip Ideas›Local Experiences›London's Iconic Red Boxes Reborn as Shops: Phone Booth Curry for Lunch? 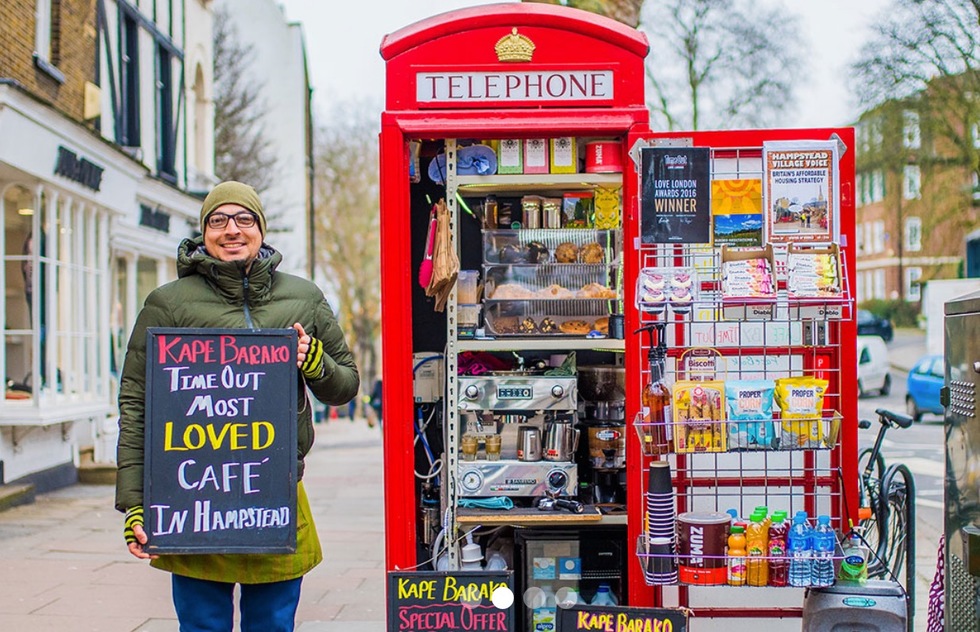 An urgent need for cheap rent in Britain is leading entrepeneurs to the famous red phone booth. The next time you visit London, this tourist icon may be more likely to serve as a cafe, newsstand, or souvenir stall.

The United Kingdom's emblematic red phone booths might be ubiquitous in tourist snapshots and on souvenirs, but in real life, the booths are endangered.

In many cities, they're nearly extinct. Replaced by smartphones and cheap roaming plans, most red phone boxes have lost their telephones and have been forsaken to rot in place. There are fewer than 10,000 left in the country, and about half of those are no longer used.

This iconic example of street furniture, a perfect fusion of design and cultural identity, has become a shabby symbol of obsolescence and urban decay. In major cities, the few units that have been left on the sidewalks are typically used only by foreign visitors taking selfies. Some booths have become targets for litterbugs, vandals, and pub-goers who have had too much beer.

But hard times brought by the pandemic may herald salvation for the booths.

A British real estate business called RKC Estates (the initials stand for Red Kiosk Company) has been obtaining unloved phone booths, fixing them up, and renting them out to small business owners. After initial set-up expenses, the monthly rent for one of these booths, most of which are painted in the famous, eye-catching shade known locally as "currant red," can be around £150 (about US$200) for a location on a busy street.

At those prices, 25-year-old mechanical engineering graduate Tayyab Shafiq was able to secure three in a row to open what he calls the "world's smallest takeaway" on the main street of Uxbridge in London.

"I thought it would be a great benefit to turn a place where people vomit on Friday nights into a useful thing," Shafiq told the Daily Mail.

The British have a deep affection for their cultural touchstones and don't want to lose them all, so several new uses for the old cabins have been devised. Boxes have been transformed into souvenir stalls, newsstands, and miniature cafes for grab-and-go meals—all at rents that welcome new entrepreneurs.

From a distance, the phone booths look unchanged. Most of them still retain their bright red hue and royal crown—a defining feature of the classic British phone booth since 1926. Up close, though, a new retail purpose reveals itself.

Some kiosks have also been repurposed for noncommercial uses, such as "defibrillator cabinets" or community book exchanges. (A valiant attempt to create free charging stations from the boxes came and went without catching on.)

Not every booth is eligible for a new lease on life. Ironically, the rarer a box is, the less likely it will be repurposed. For example, of the roughly 1,700 K2 model boxes with pierced (not molded) crowns that were installed between 1926 and 1935, only 208 remain in London. Because they have been under government protection for 15 years, they're more or less untouchable, exposing them to further disintegration. About 3,000 phone booths are "listed" this way, protected from intentional destruction but otherwise at risk of benign neglect.

Rare phone boxes stand the best chances for survival if they're near major institutions, such as the Royal Academy (outside of which the original 1924 prototype stands) or the London Zoo, where public interest and heavy foot traffic validate longevity.

As thousands more boxes remain unclaimed, this tourist mainstay is fertile ground for rediscovery during an economic downturn. A remnant of the past empire may yet persist to serve a new one.