Thank you for subscribing!
Got it! Thank you!
Home›Trip Ideas›Travelers with Disabilities›I Stayed At the World's Most Accessible Hotel. Here's What It Was Like 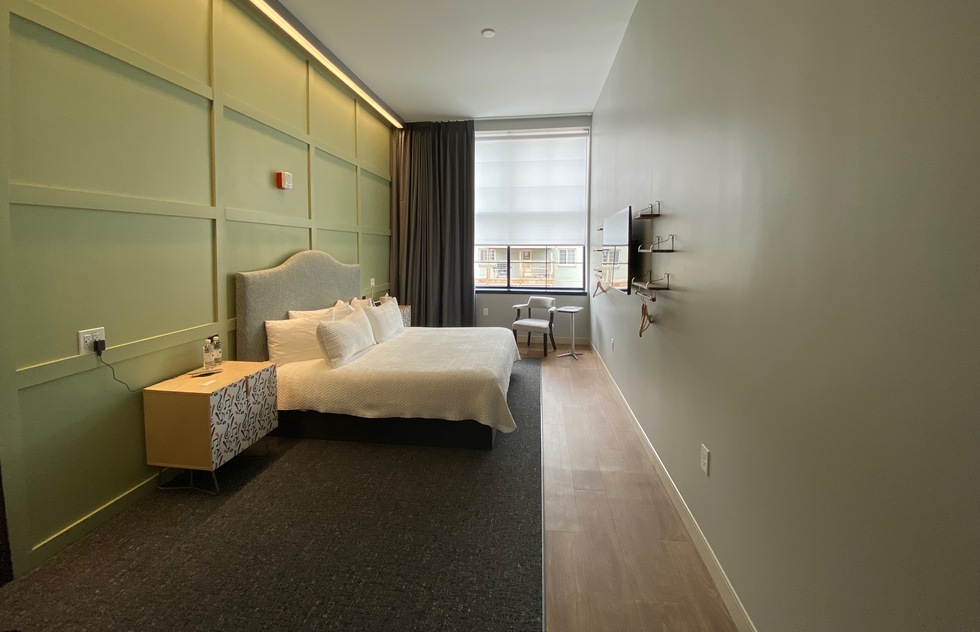 I Stayed At the World's Most Accessible Hotel. Here's What It Was Like

Every guest room at West Virginia's Schoolhouse Hotel is accessible, and so are all of the public spaces. Which leaves me to wonder: Why aren't more lodgings taking the needs of travelers with disabilities seriously?

According to the Centers for Disease Control, 26% of all Americans have some form of disability, and 13.7% of the population lives with mobility impairments.

Yet under the Americans With Disabilities Act (according to the standards last updated in 2010), only 4% of hotel rooms in the U.S.A. are required to be accessible in smaller hotels (50 rooms or fewer). In larger hotels, the requirement is just 2%.

My guess is those statistics hide a lot of tales of travel dreams thwarted. I've certainly read stories on message boards about wheelchair users who had to cancel hotel stays after finding out that there were no appropriate rooms on the ground floor—a potential safety issue in a fire. (Currently, the ADA does not specify where in a hotel the accessible rooms must be.)

So I was excited to stay at the new-in-2022 Schoolhouse Hotel in White Sulphur Springs, West Virginia, just down the road from the iconic Greenbriar Resort. Built out of, believe it or not, a former school, every inch of it was conceived by the nonprofit Disability Opportunity Fund (DOF) to address the needs of travelers who are hearing impaired, visually impaired, mobility challenged, or cognitively challenged.

What does that mean in practice? The photo of my spacious room above was not taken with a fish-eye lens. Every single room (and not just 4% of them) has a remarkable amount of uncluttered area so that they can be easily navigated by folks in wheelchairs or on scooters.

In addition, all switches throughout the hotel were installed at a height that can be reached by a wheelchair user, and a pad next to the bed controls the room's lights, window shades, and TV.

Beds are lower to the ground, too, and I can testify that mine was mighty comfortable, with several different pillow types and a top-quality mattress.

To assist people with hearing impairments, walls between rooms were stuffed with extra insulation to make sure that they're pin-drop quiet—which also makes them primo for sleeping.

Bathrooms either have roll-in showers or bathtubs with hydronic body lifts, and all have touch pads that allow users to flush and clean without having to twist around while on the loo.

To get into and out of the bathrooms, guests simply wave a hand in front of a panel on the sliding door—and this was where I had my only problem with the room. A light flashed every few seconds from that panel, whether anyone was in front of the door or not, which disturbed my sleep on my first night at the Schoolhouse.

Happily, the hotel was able to disable the light, at my request, for the second night of my stay. That meant the bathroom door had to remain ajar—which was not a problem since I was bunking alone. My hope is the hotel will find a fix for this problem; the Schoolhouse had only been open two months when I visited, so I'll give this quirk the benefit of the doubt. 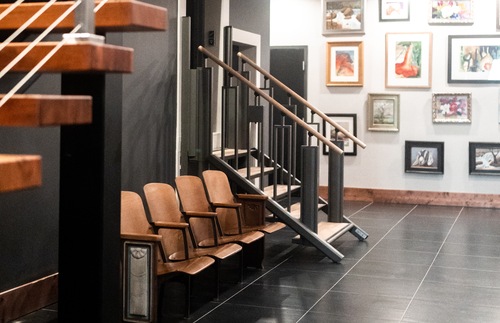 Public areas are also cleverly designed to suit a variety of needs and tastes. Most incorporate elements from the old schoolhouse (like the chairs above) and celebrate the accomplishments of people with disabilities by filling the walls entirely by works created by disabled artists. Where there must be a small staircase, like the one pictured above, it is engineered to also act as a wheelchair lift.

In the former gymnasium, which is now a ballroom for conventions and other gatherings, no wall sconces were used because studies have shown that type of side lighting makes it difficult for hearing impaired people to read lips. Instead, all of the lighting comes from above.

I was especially impressed, and frankly moved, by the bar area in the restaurant: A third of it was built at wheelchair height and the bartender's area is sunken so that when they serve guests, they can communicate with them eye-to-eye no matter where they sit.

I'm hoping that this intelligently empathetic hotel becomes hugely successful, if only so it can serve as a model for hotels across the United States. It's about time.